THE SOLUTION TO THE HUNGER GAMES? BEST FOOD FORWARD 2012: PART 1 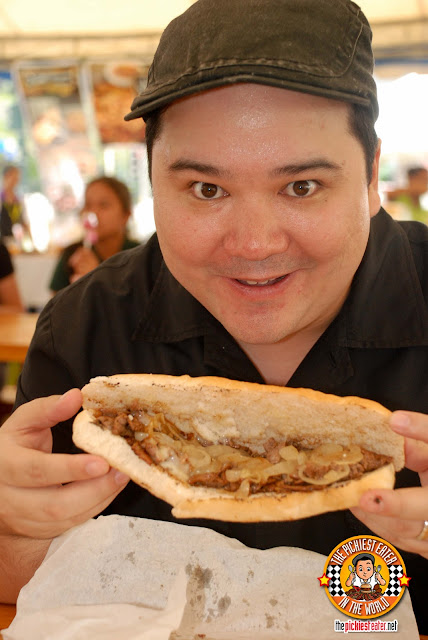 By now I really shouldn't get excited at the thought of food fairs anymore but I got up early last Saturday morning in anticipation of the annual food fair, Best Food Forward.


I had such a great time there, I ended up getting early on Sunday too!


Yep, I spent practically two whole days at a food fair. And yep, I need to get a life, I know. 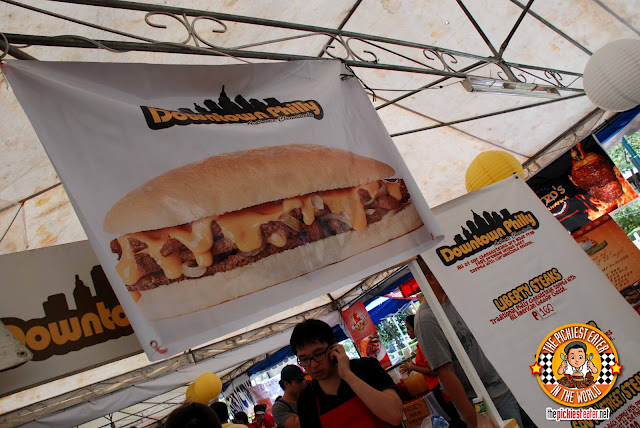 As soon as we got there, we made a beeline for the picnic area outside because the tables inside were already occupied. We found a spot in front of a stall called "Downtown Philly" that was selling Cheese Steaks.


I took it as a sign from the almighty above.


And as always, he didn't let me down. 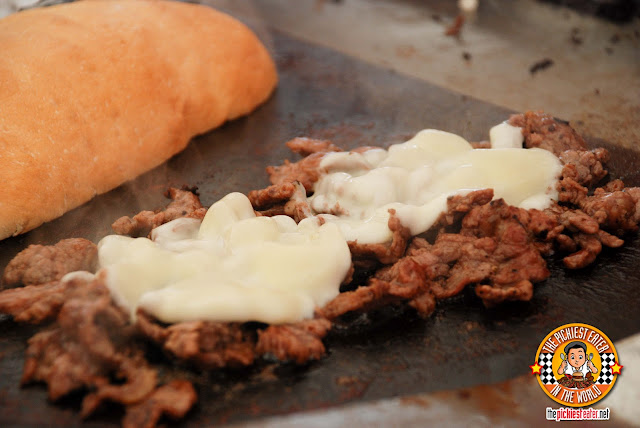 I tried the "South Street Steak", which was Angus Beef with Provolone Cheese, and I must have devoured it in minutes (Its a good thing I split it in half with Rina though). Because of the mild flavor of the provolone, the flavor of the beef really popped out. 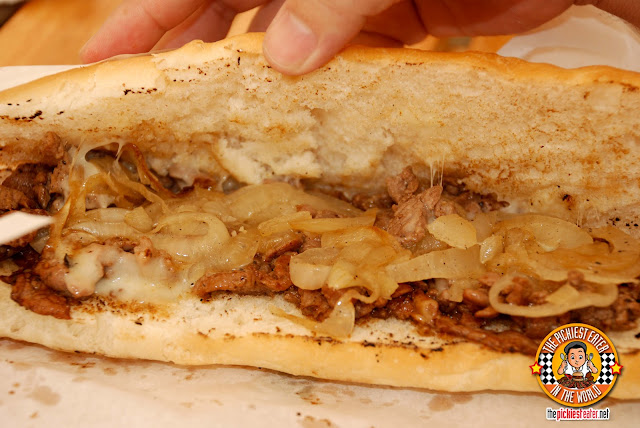 The sandwich also had the right balance between onions and meat. My trip last year to Elberts CheeseSteaks gave me basically an onion and cheese sandwich with bits of steak, this one nailed the ratio right on the head. You get a nice meatiness with a tinge of sweetness from the carmelized onions.

My brother gave their Liberty Steak a try and graciously let me have a bite. The Liberty would be the choice of Cheese lovers (Rina), with the cheddar cheese shining through.

My only comment about would be to find better bread. Though it wasn't horrible bread, My brother's Liberty Steak was a little bit dry at the ends. The portions that soak up the juices from the steak and onions, however were awesome. 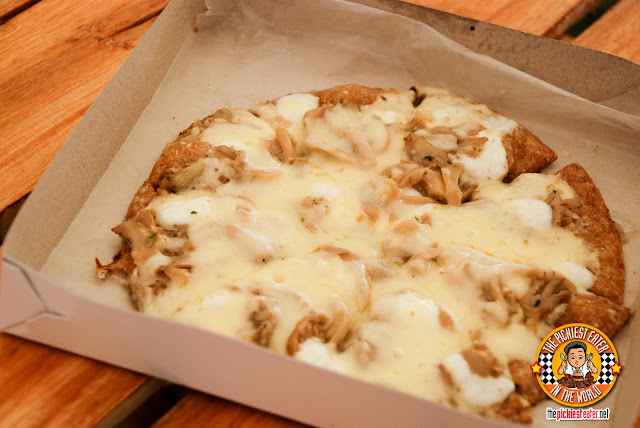 Even without me suggesting it to him, Rina's friend Owen bought a pizza from Quantum Cafe. He was intrigued at the thought of a pizza made with healthier ingredients for him to indulge in (Owen joins Fun Runs when he can.. I don't join Runs because my grade school teacher would constantly tell me whenever I'm in the halls, "No Running!!".Words I live by till this very day).

I was pleasantly surprised with how much I enjoyed Quantum Cafe's new product, the "Full Shroom Pizza". It was a wonderful blend of Garlic, Cheeses and Oyster Mushrooms, all laid out on a crispy whole wheat crust. Mrs. Marijo Ferraren explained to me that she gets her mushrooms from "The Ministry Of Mushrooms" (Which I think is the most awesome name ever for a mushroom business), which resulted in fatter, tastier, oyster mushrooms.


I was never a Big mushroom fan, but this was quite exceptional. 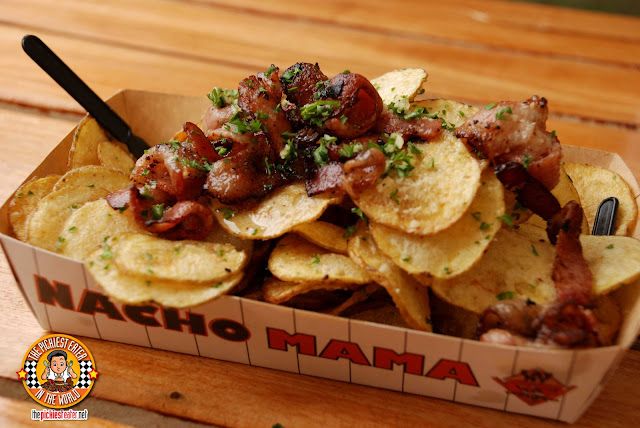 My boy Kim of Eat My GF  joked that this weekend marked our first year "Anniversary", because I discovered Eat My GF at Best Food Forward 2011. Again, even without my suggestion, two of my friends casually strolled around and ended up with some of their Garlic Potato Chips. It was my brother that proved that we truly do share the same blood, when he came back with his potato chips topped of with bacon.


Oh Sorry. I was staring at the picture. Yeah, so back to blogging. 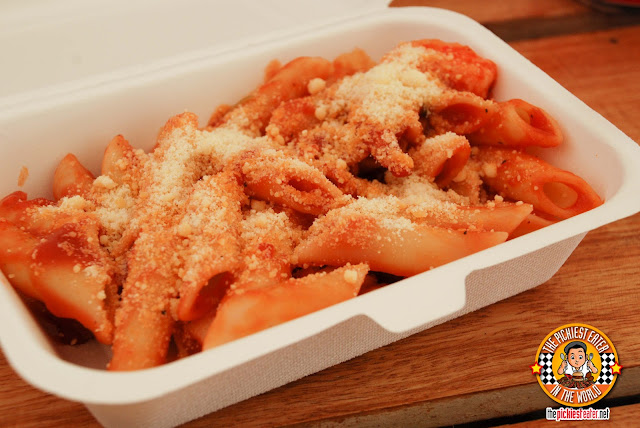 
This time however, she went to me and guiltily said, "I'm going to order the Tomato Shrimp & Basil Penne, from Bliss, ok? Order whatever you want, but I'm getting that!"


I was half wondering if I said something to her earlier that made her think she couldn't order what she wanted.

Because of the strong presence of the tomato, Rina forbid me from trying it. However based on the wonderful aroma the pasta gave out, and judging from the relentless assault she launched against her plate a part of me is suspecting there was more to Rina's adamant "No Sharing Policy" than just concerns for my health.


She truly did find happiness in her plate.


We came back on the second day of Best Food Forward and Rina went straight back to Bliss for another , only to find out they were sold out. 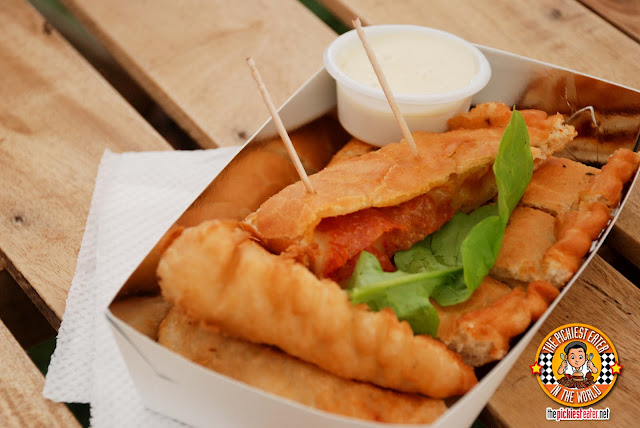 During my last two Wednesday night visits to Mercato Centrale, I have always gotten a Bianca Panzarotti with the Blue Cheese Dip. See, I don't eat Blue cheese either, but I love their dip because the taste of the blue cheese isn't too sharp and almost to the point of being stinky.


After three straight Bianca Panzarotti's in three straight food fairs, I decided to try the All Meat variant for a change (I like to live dangerously, see?). I was stoked to find out that the tomato sauce used wasn't too heavy, leaving the meat and bread to do most of the talking for the dish.


One of the biggest factors that  my adoration of Mama Lou's Panzarotti is definitely the bread pocket it comes in. It's light and crispy, and even alone with the dip it's fantastic. As Mama Lou's Restaurant Manager Crystal says, "If you like Pizza, you'll definitely like Panzarotti!"


Mama Lou's actually has a sit down restaurant at Las Pinas.. Check out their facebook page here for more information! 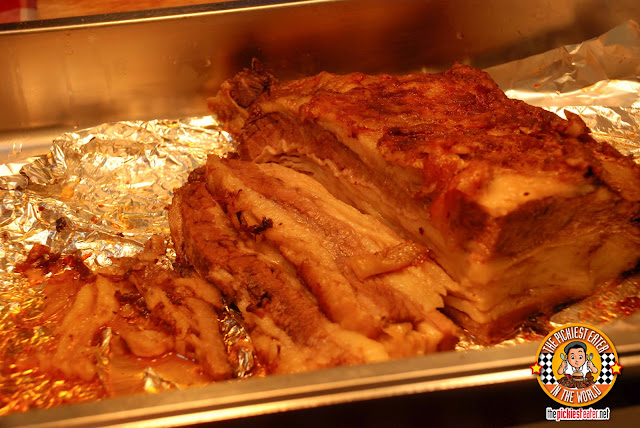 I was stopped in my tracks twice during my visit to Best Food Forward by slabs of beef. The first time was The Roast Beef of Cuisinier's. At first glance the beef looked a little bit dry, however when I saw the dude slice it for a customer, the juices that flowed out from the meat begged to differ. And the generous portions of fat just kept me drooling 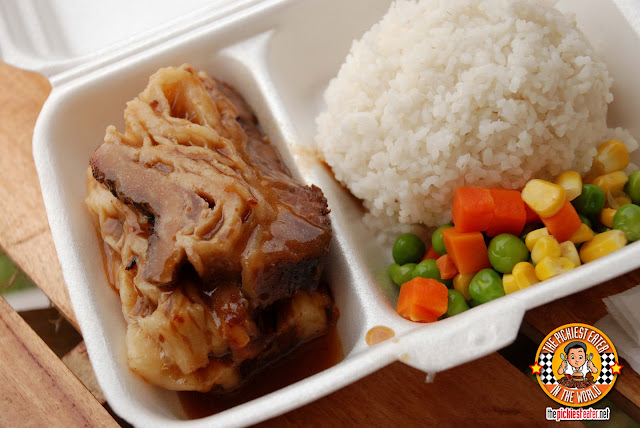 Like Chef Resty's and Maechibog, Cuisinier's Roast Beef is something I would not think twice about ordering again. The meat was tender moist, and the gravy helped bring out the flavor of the meat. I gotta tell ya, It broke my heart when the sales lady refused my request of asking for the small trimming of fat on the bottom of the aluminum foil plate.

I told her I was even willing to buy it from her, but she politely refused. So that lining of fat will forever be known in my heart as "The One That Got Away..." 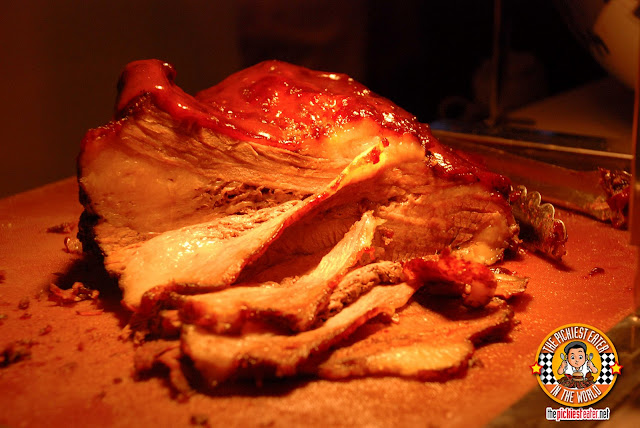 So how did I get over my roast beef heartbreak? By moving on to another slab of beef, of course! As Rina and I were making our rounds, Rina was stopped in her tracks a by a hunk of beef, and no I'm not talking about me. She pointed out this beautiful looking Beef Brisket (can you say "Beef Brisket" ten times really fast without it coming out as "Brief Biscuit"?) that seemed to glimmer in the spot light. 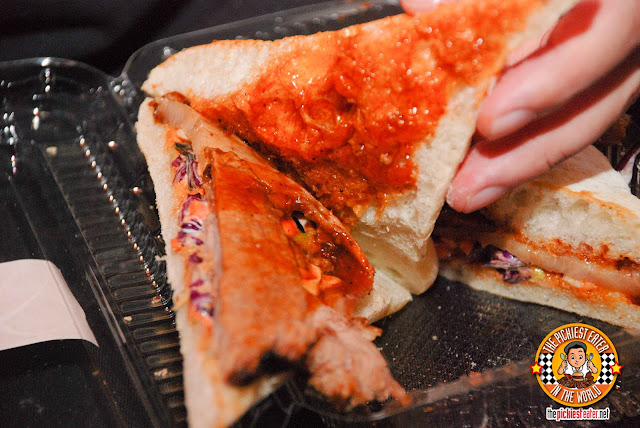 Catering By Claudia turned that wonderful piece of Brisket into a sandwich by slicing it up real nice and laying it on a bed or red cabbage coleslaw which was spread out on a piece of Ciabatta bread. The tangy BBQ Flavor reminded me of the Hickory shredded Pork Sandwich I had at Sandwicheese a few weeks earlier, except the dry Ciabatta used was no comparison to the excellence of Sandwicheeses' bread.

The flavors were amazing, however as I've always said, the bread used in a Sandwich can make or break it for me, and despite the amazing beef used, the bread let me down.


Although I must admit, there was significant improvement when heated. 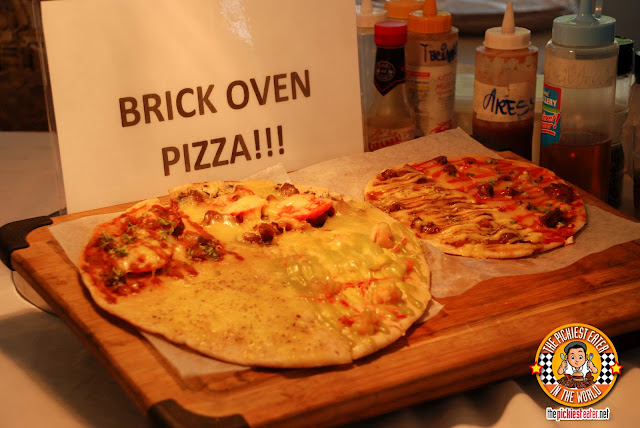 Since there seemed to be a dearth of vendors selling pork chops, Rina's friend Lia (the hottie that joined us on our food trips to Som's, Pepper Lunch and Bob's among many other places) looked for Pizza instead, and found Stop Over Pizza.

Lia is a tiny little woman that eats like a bird, which is good news for me because if you wait around long enough, she'll only eat around a quarter of her plate before she starts giving it out.


Fortunately she left me a slice of Stop Over Pizza's Terimayo Chicken, which I found to be rather excellent. The sweetness of the Teriyaki sauce fuses beautifully with the creaminess of the mayonnaise, creating an amazing harmony of flavors in your mouth. The crust is thin and let out a light crunch with every bite. 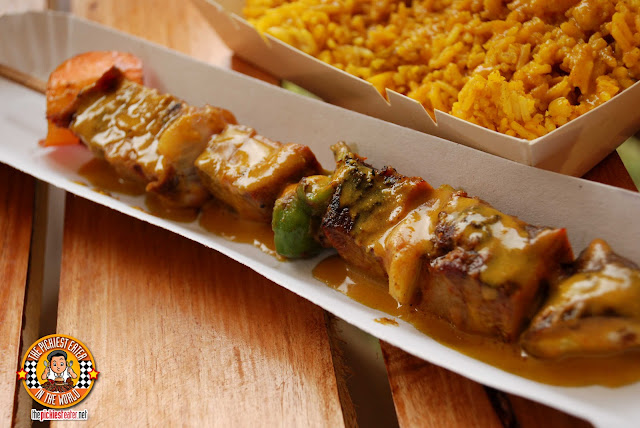 Rina's second round at Skew U was admittedly not as amazing as her first (during the BFF Taste Test), but still delicious nonetheless. The Beef Angus Skewer wasn't seasoned as well as it was during the Taste Test, and the rice would have been better if served hot. But the incredibly flavor of the curry that she was looking for was still present and she still has her heart set on visiting their restaurant at Kapitolyo. 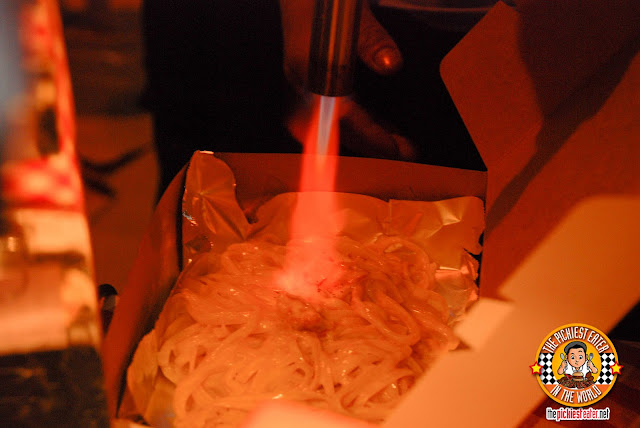 How many times have you ordered Spaghetti Carbonara, and just before its handed to you, the waiter whips out a blowtorch and aims it at your pasta and blasts away?

Rina and I were baffled at the sight of this, until we realized we had just step in front of the stall of Chef Sau Del Rosario's Chelsea Market. 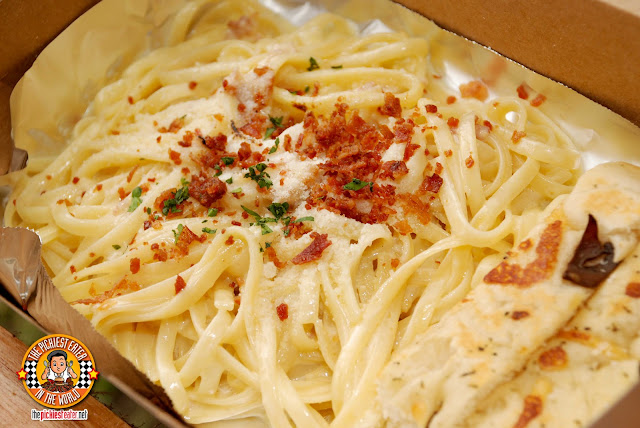 It's nice to see that a restaurant of Chelsea Market's caliber took time to participate in a food fair such as Best Food Forward, even to the point of having Chef Sau himself do a short cooking demo.

Going back to the Carbonara, it was quite a generous serving for it's price (P150 inclusive of bread) but could have used a touch more bacon in my book. Which isn't such a bad thing when you consider that I say that about nearly every dish I eat.

Just so you know, all this food were consumed in the span of two days by around ten people. And I haven't even gotten to the desserts yet!


Stay tuned for the second installment of my Best Food Forward Series!

PIX FROM THE DAY 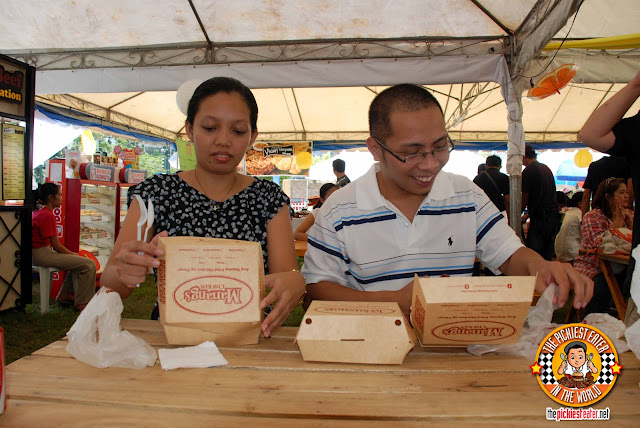 Three boxes for two people..
You think Chaikka and Don like Manangs Chicken? 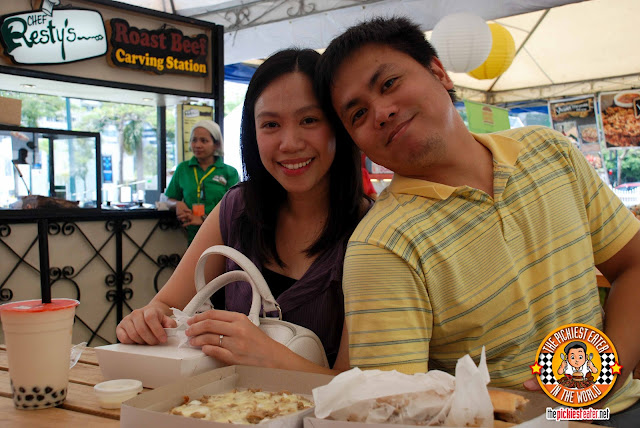 The betrothed Karla and Owen 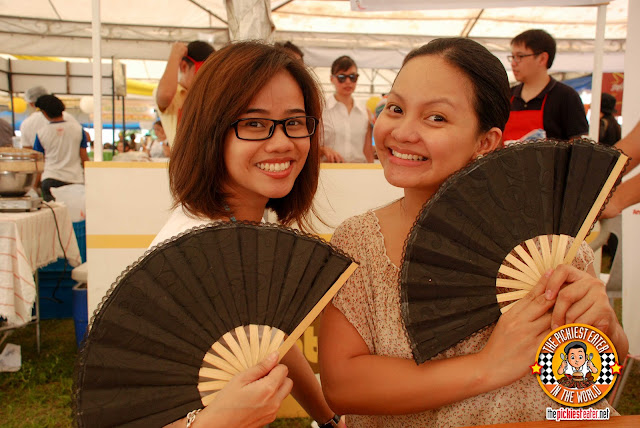 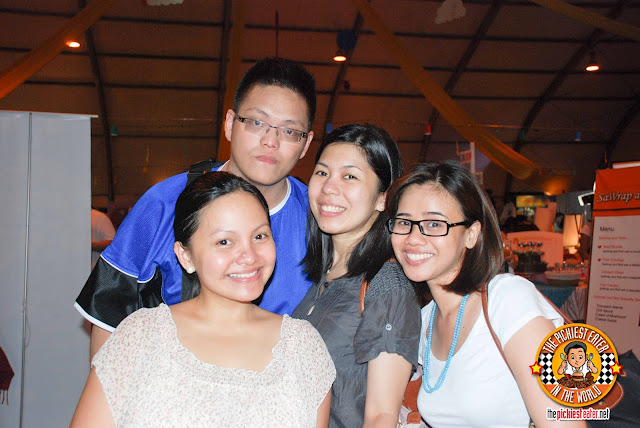 Mini Reunion with Rina, Jo, Melay and Lia!
Posted by The Pickiest Eater at 1:50 AM