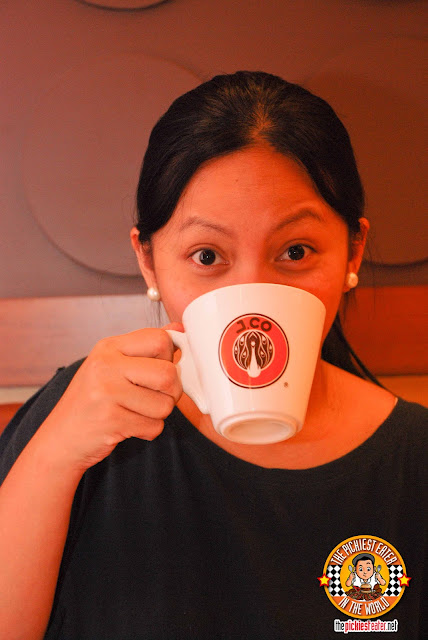 A few months ago, as I was strolling along Greenbelt 3, I saw a sign about this Donut place that would be opening called "J. CO Donuts and Coffee".  It's supposedly really big in Indonesia and Malaysia, and they've started opening stores in China and Singapore.


Last March 15, Rina and I dropped by the opening of J. Co Donuts and Coffee's first Philippine Branch at Megamall to grab us some donuts, just to see what everyone seemed so excited about. Unfortunately, the line that had formed for the opening was ridiculous, and we were told that if we wanted to buy a donut, we might have to wait around two hours.


Yes, you read that right. Two Hours. For a DONUT.


So to call J. Co's arrival here in the Philippines "a success" would be a massive understatement.

As you could imagine, I wasn't planning on standing in line that long so I decided to go back the following Saturday morning, where there was a good sized crowd inside but virtually no line at all. 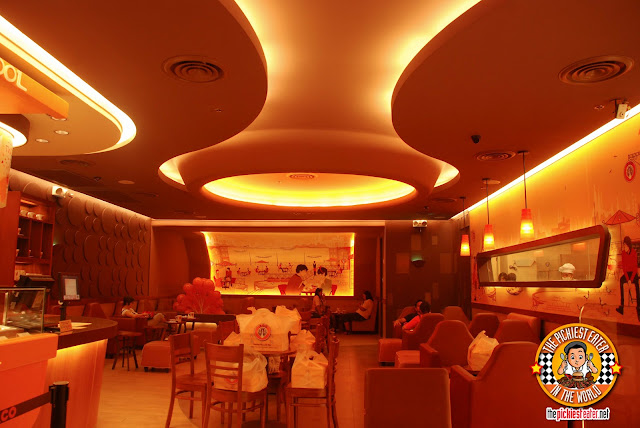 Though the lighting is a bit too orangey for my liking, the place is looks like quite a comfortable and relaxing place to lounge around. When I reach professional blogger status, and I can spending my afternoons writing at home or at coffee shops this would be one of the first places I could think about settling in. 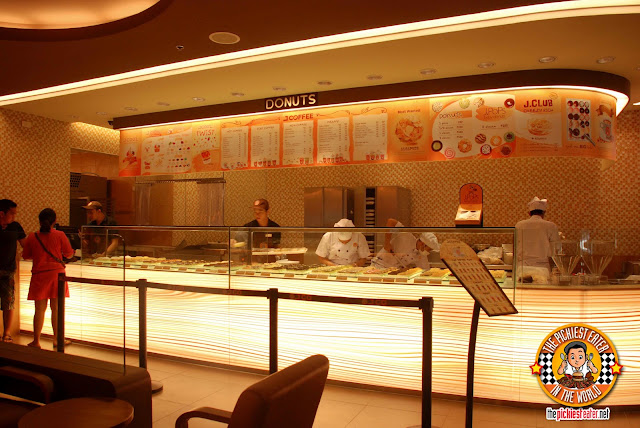 As soon as you walk in, you'll see the large counter of donuts on your right, showcasing a wide selection of donuts to choose from. The choices Range from the regular Glazed, to a Black Forest, and even a Green Tea! 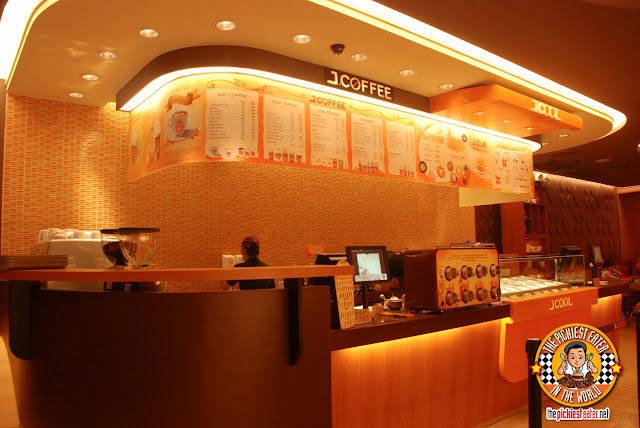 On the other side, if you just wanna go straight for the their coffees and frappees, there's a counter specifically for that. 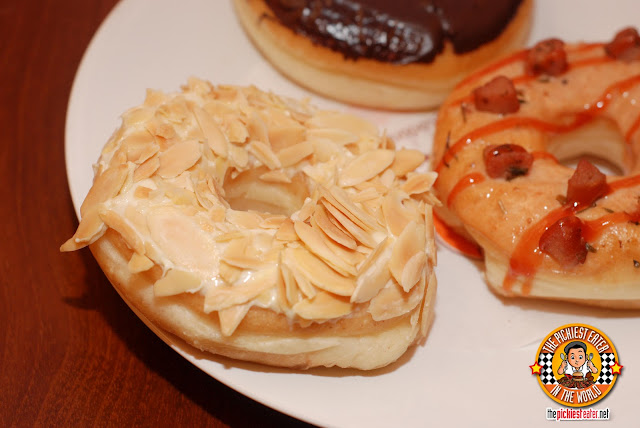 The signature donut of J. Co's is called the "Alcapone". It's a wonderful smearing of generous heapings of belgian white chocolate, topped with toasted almonds. It was deliciously milky and creamy, and instantly became Rina's favorite. 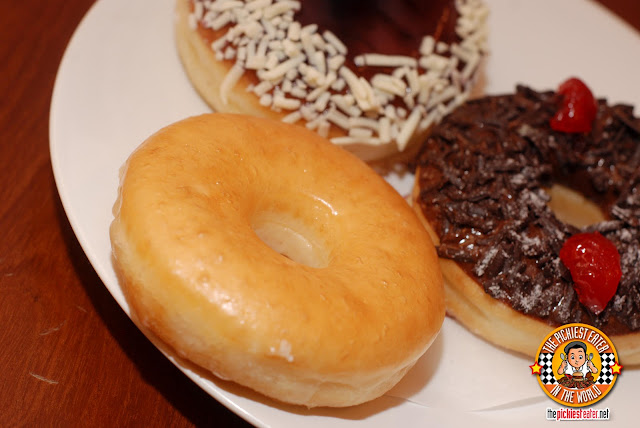 The glazed, or the "Glazzy", isn't very different from Krispy Kreme, but in my opinion (and possibly because it wasn't hot), it wasn't as melt in your mouth. 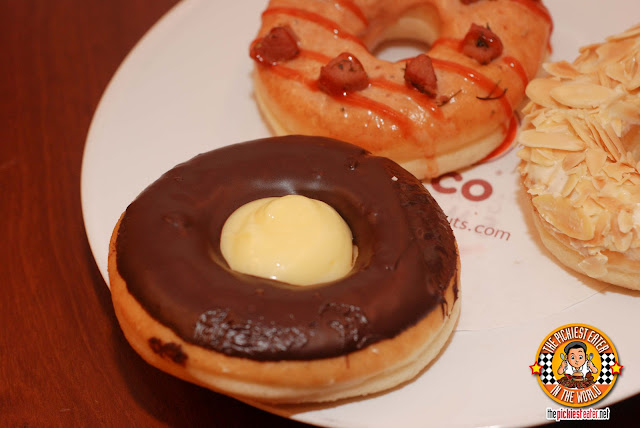 I ordered the Copa Banana for Rina. It was a great medley of a Dark Chocolate topping and rich Banana cream center. Next to the Alcapone, this was one of her favorites. 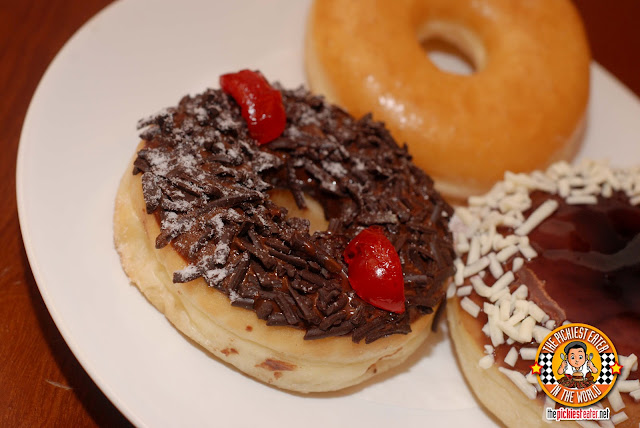 Rina was intrigued by Forest Glam, which is J. Co's version of "Black Forest". I've never been a fan of Black Forest and not even J. Co could change that. It wasn't horrible, mind you, but Black Forest has some sort of liqueur flavor to it that I have a strong dislike for. Granted, that said flavor wasn't very strong in this donut, I could still taste a hint that was enough for me to not pursue another bite. However if you're into it, then 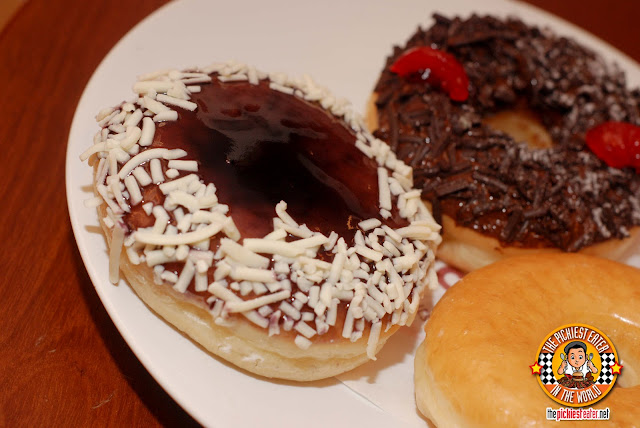 I can't decide which one is my favorite.. the Alcapone or the Blue Berrymore. The donut is topped with Blueberry Sauce, which is sweet without going overboard. White chocolate sprinkles are then gently laid down around the edges.

The best thing about this, however was was the cream cheese filling inside it that was the glue the brought together the sweetness of the blueberry and the richness of the white chocolate. 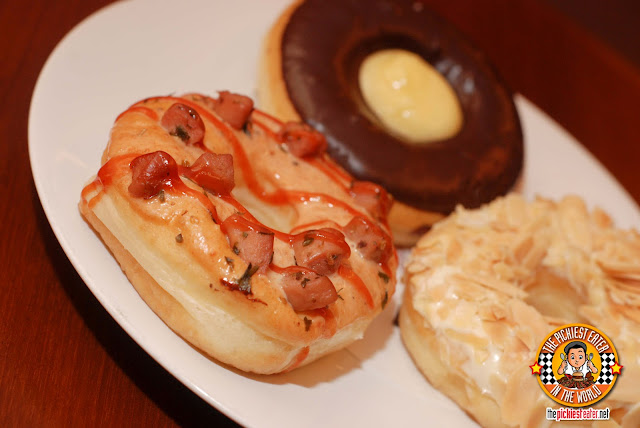 Rina and I couldn't resist giving their savory donut, the Mona Pisa a shot. Though it sounded a little strange, we actually liked it. Sweet tomato sauce is drizzled on the donut and topped with little bits of sausage on top. The thought of a "Pizza Donut" sounded strange at first, but one bite will dispel any doubts you may have. It's pretty darn good.. It tastes like a pizza with a slightly sweeter crust.

J.Co's selection of donuts is very impressive and creative, and the more important part, absolutely delicious.

WELCOME TO THE PHILIPPINES, J. CO'S!

A funny thing happened to us at J. Co's when we were there. When Rina was taking her finally pictures of the place, one of their Indonesian national staff started signalling to her "no" and saying "Sorry! Sorry!", clearly meaning that photography was not allowed. Rina was oblivious though, and didnt notice the guy. The manager, (I think her name was Rose) saw what was happening and in turn started signalling to the staff that taking pictures was allowed, and the Indonesian national apologized to Rina, but again, Rina didn't notice hehe.

Since those were the last pictures Rina needed, we packed our stuff and went to the outside to take pictures of the exterior. Apparently, the manager must have thought we stormed out, because seconds later she came through the door to apologize if we were offended by the Indonesian dude, because in his country, picture taking isn't allowed in the store, but here in the Philippines, they welcome it.

We told her that we totally understood and were not offended at all. The man wasn't rude (like the itchbay from Toast Box was), and he was just doing his job, and to think nothing of it. As unnecessary as her gesture was, we still appreciated her coming out to talk to us, and showing genuine concern for our feelings. She handled herself gracefully and courteously, unlike the Itchbay from Toast Box. Did I mention her already? hehe


I forgot to mention that they also have "Baby Donuts" sorta like their version of Dunkin Donuts Munchkins, only a lot more awesome. 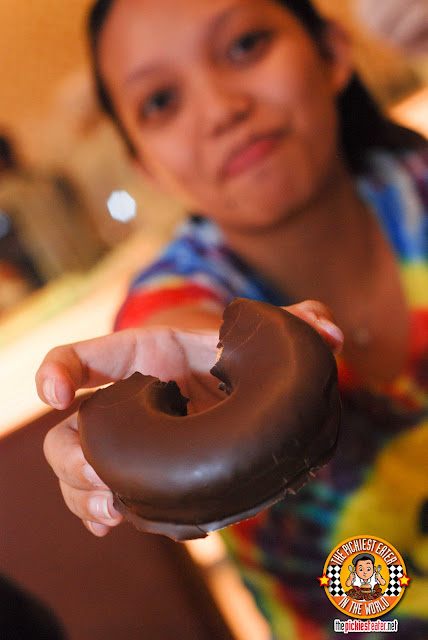 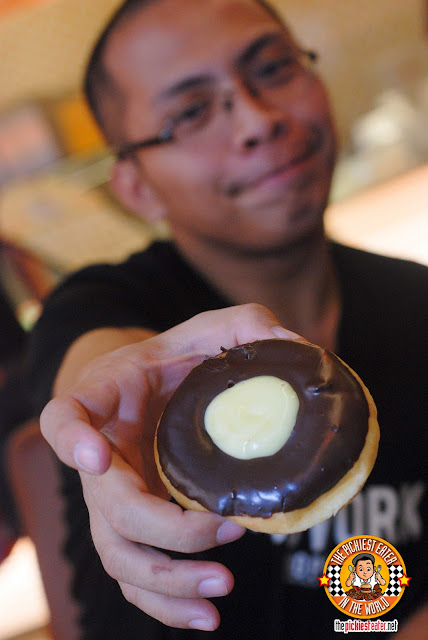 Don also ordered the Copa Banana,
and liked it enough to keep his eyes open for a picture
Posted by The Pickiest Eater at 10:41 PM