ROCK THE KASBAH.. FOR BRUNCH! 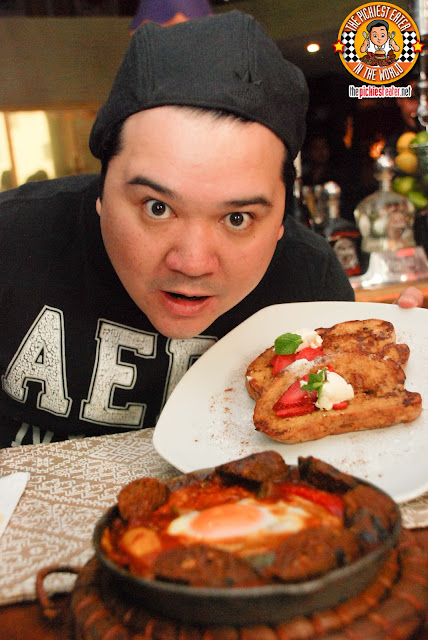 When I told Rina that we'd be going to Kasbah to try their Moroccan Brunch menu, she replied with an excited "Great! What kind of dishes do they serve in Morocco? I opened my mouth, expecting to rattle off names of exotic dishes- then I realized something. I had no clue what Moroccan food was all about. Was it Curry based? No that would be leaning towards Indian food. Would they be serving Kebabs and Shawarmas? Wouldn't that be more of Persian fare? But Morocco is in Africa, not in Asia!

I didn't realize how deep in thought I was, until Rina said to me, after noticing my mouth had been agape for a bit longer than normal, "Para kang nag-hang!".
So began my first step in the education on the flavors Moroccan food had to offer through their brunch dishes. But something I wasn't expecting to happen, was that my short trip to Kasbah would also give me, not only an authentic taste of their food, but of their country and culture as well. 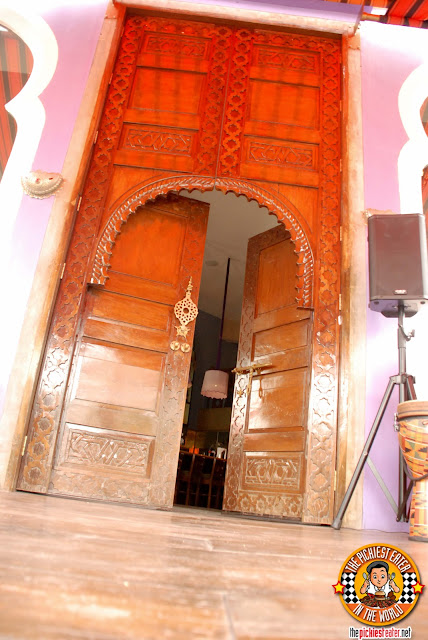 Even just by walking up to the door of Kasbah feels like you're about to be transported into a different country. I don't know how many other establishments would bother on spending for such intricate detail and work on Kasbah's beautiful, almost mystical looking door. Almost to the point that stepping through it would transport you to the beautiful land of Morocco. 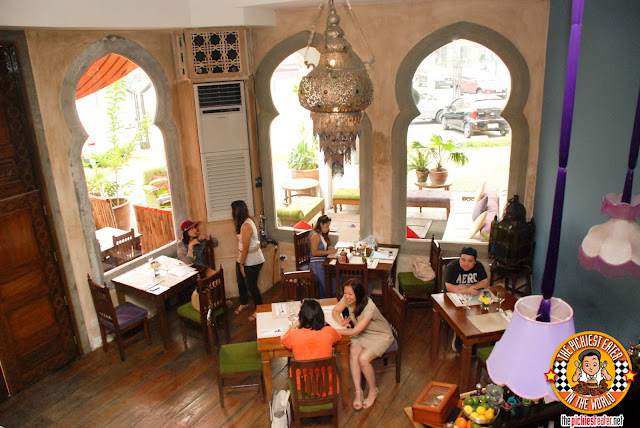 Stepping inside the restaurant, felt like I had walked into the set of an Indiana Jones movie. I was no longer in the Philippines, but in one of those restaurants where Indiana Jones meets up with his contact that has information on the whereabouts of the stolen, ancient artifact, just before the henchmen burst through the doors and.. ummm.. You get the picture.

Everything, from the texture of floorboards, to the details of the chandeliers, had no pretentiousness about it. This wasn't a restaurant that just plastered posters of places of Morocco on their walls and claimed that they're an authentic Moroccan Restaurant. Kasbah was intent on giving you a taste of the food, and a feel of the country. To me, this was a very successful attempt, because even though I haven't been fortunate enough to visit Morocco, this is pretty much how I would imagine it would be. 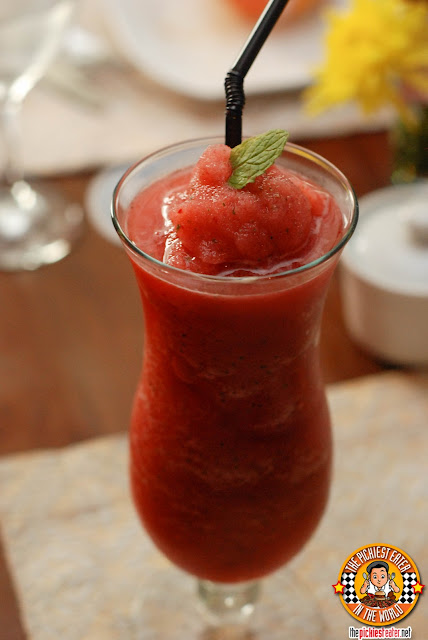 After I was done admiring my surroundings, I began my morning with a refreshing Strawberry-Pomegranate Shake (P180). One sip of this, and I knew that it would be comandeered by Rina, and I was right. It had a nice fruity flavor to it, that wasn't too strong. This was the first time, to my recollection that I would be having pomegranate, so I wasn't sure what to expect, but the results very pleasant. There was a herb infusion into it that you get in the back of your throat after a gulp, which added a delightful twist. 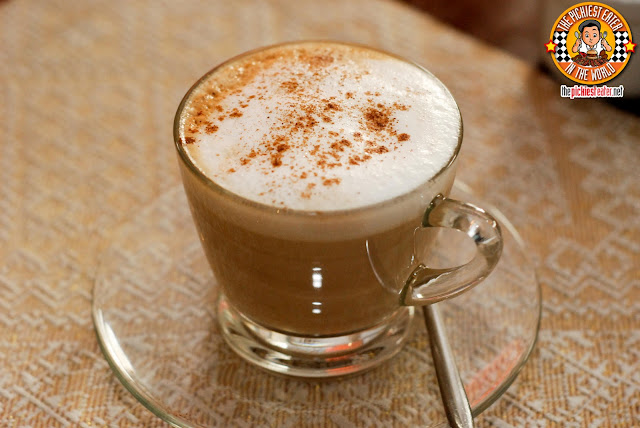 My poor Rina finished working at around 5 in the morning, so she really needed a quick jolt to wake her up 11am. Kasbah's Vittoria Capuccino (P125) was exactly what the doctor ordered. I could smell the rich aroma of the coffee from across the table. Rina didn't notice it, but every time she took a sip, she involuntarily, would close her eyes to absorb the delicious flavor.  wa 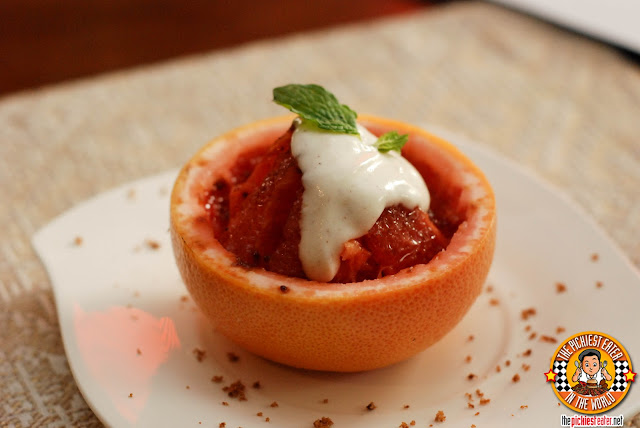 We kicked off the meal with the Grilled Grapefruit with Star Anise, Muscovado Sugar & Greek Yogurt (P160). The Muscovado Sugar and Greek Yogurt really elevated the flavor of this dish, and made for a phenomenal topping. It was lightly sweet and creamy, with a subtle hint of tartness. My only qualm was the actual grapefruit. It was a tad bit too bitter for my liking. 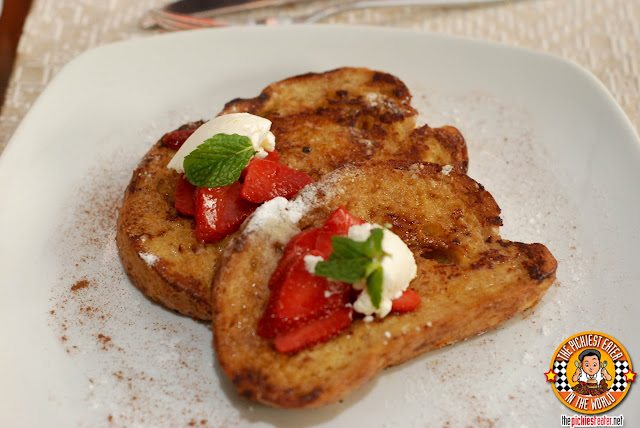 I ordered the Orange Cardamom French Toast & Honeyed Strawberries with Marscapone (P255). Two perfectly cooked slices of toast was lied before me, in a gorgeous presentation. The first thing that I noticed was that this didn't come with any syrup in it. The second thing I noticed was that it didn't need any syrup with it, because the infusion of the orange gave it an innate  "citrusy" sweetness, as did the strawberries. The Marscapone was a great way to balance the different flavors out. 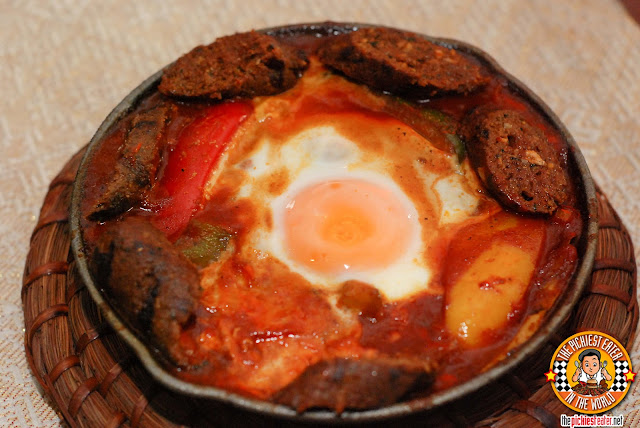 It took me all of ten seconds to declare the Shakshuka, aka "The Hangover Buster", Rina's order. Rina may be a tiny little girl, but I guarantee you, there's nothing tiny about her appetite. She needs a heavy meal to start her day, and I think the heaviest item on the brunch menu was the Shakshuka. The Shakshuka is a poached egg on spiced Tomato Sauce, mixed with Red, green, and yellow peppers, with merguez sausages. If you're a vegetarian (you poor thing), you may choose to go sausage-less.

This was a little difficult for me to eat because of the tomato sauce (I'm hyper-acidic), but Rina was nice enough to give me some slices of sausages, which were fantastic. The strong acid of the sauce mixed nicely with the creaminess of the egg, tempering it slightly, but letting it still be the prevailing flavor. 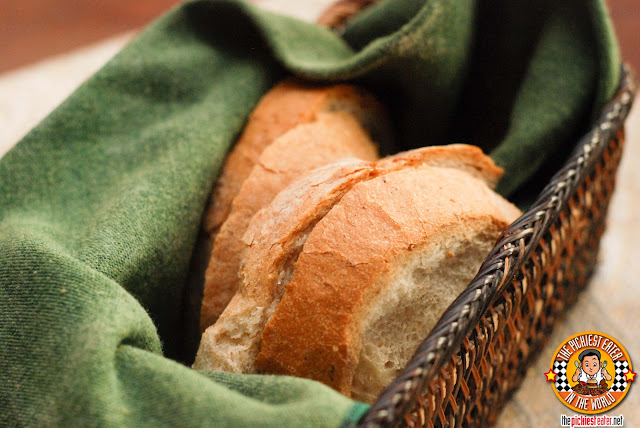 Though Rina clearly would have preferred rice as a companion to her meal, the sourdough bread was actually a very good substitute. I found myself dabbing a bit of the fragrant tomato sauce unto my bread, and wrapping it around a slice of sausage. What I liked about this, was that it was extremely filling, without leaving you feeling bloated afterwards.

And trust me, "bloated" is usually my default setting.

Other Items in Kasbah's Brunch menu are: 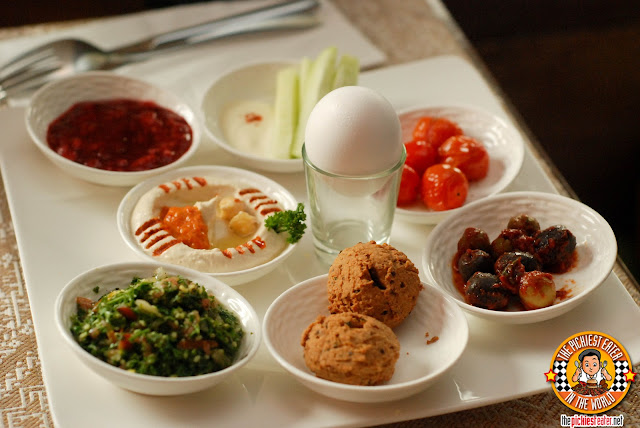 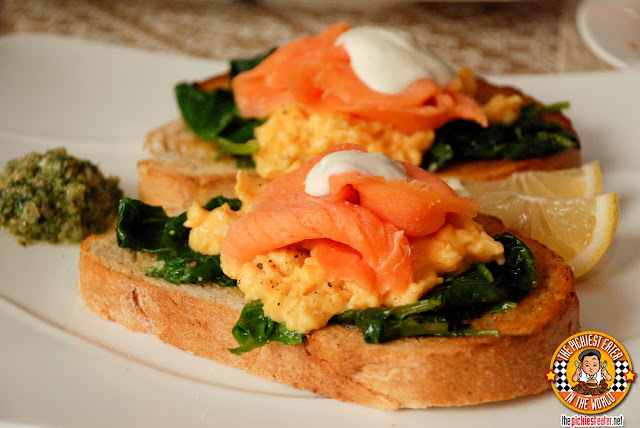 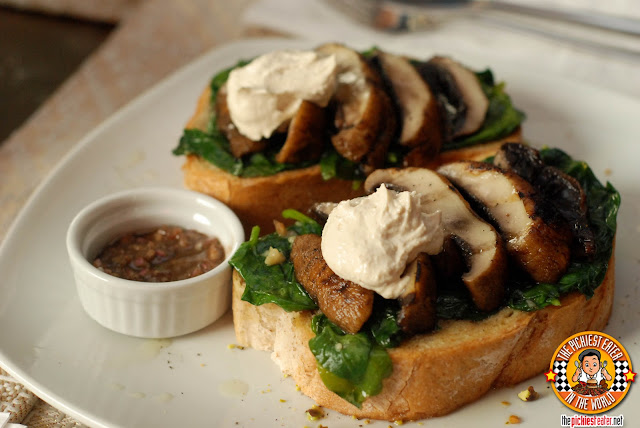 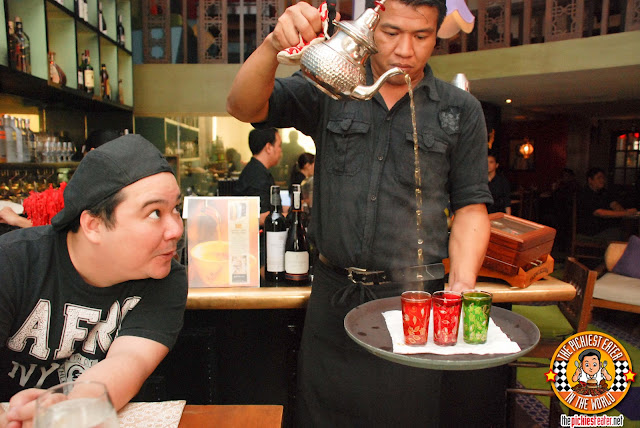 If you are a tea lover, than you must try the Moroccan Mint Tea (P175).


On the whole, it was a wonderful introduction to Moroccan food. After giving their new Brunch menu a try, I'm really excited to further explore their actual menu, and wrap my taste buds around their savory dishes.

Kasbah, you shall see me again soon! 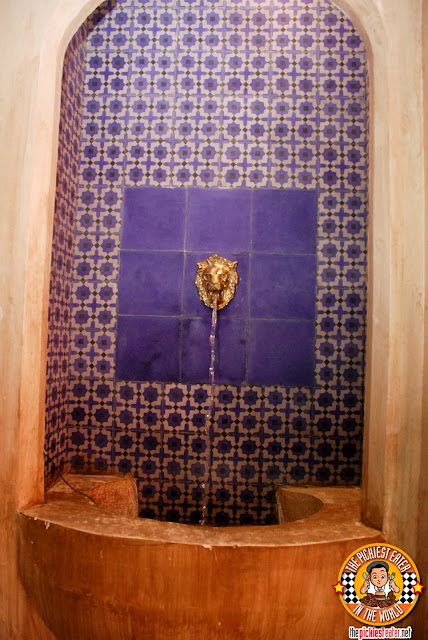 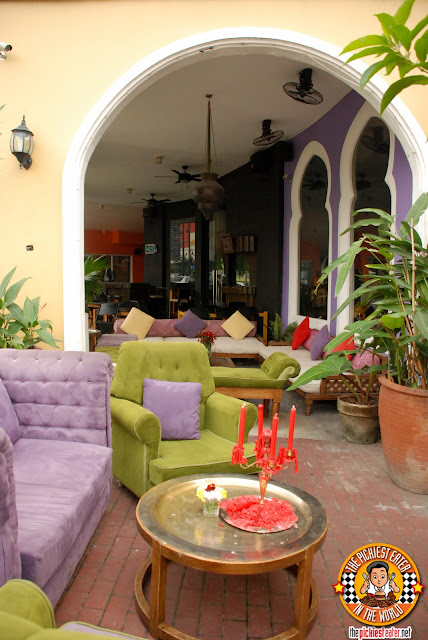 At first glance, you wouldn't think this was at The Fort Strip 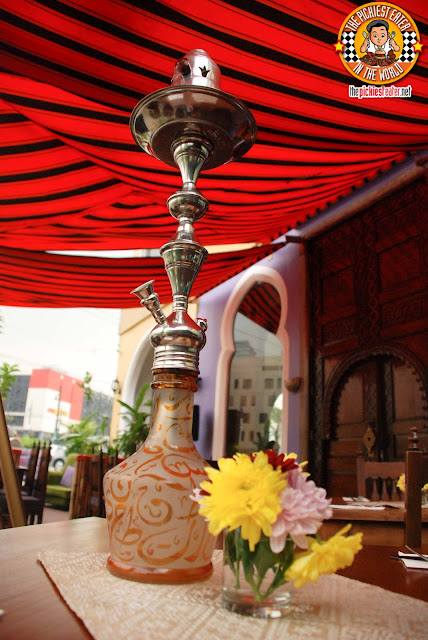 Rina asked me, "Is this Shisha?"
I wasn't sure, so I just answered, "Gesundheit." 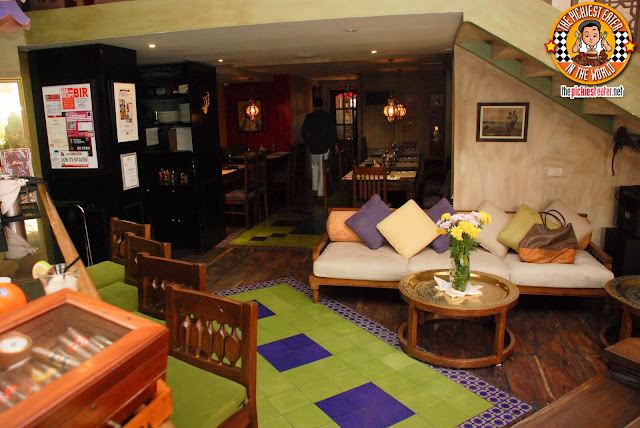 Beautiful interiors.. I wanted so badly to lie down on that couch. 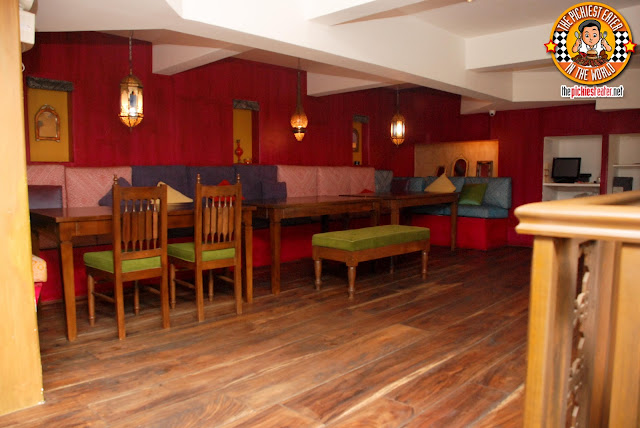 Despite having a second Floor, Kasbah usually gets packed in the evenings 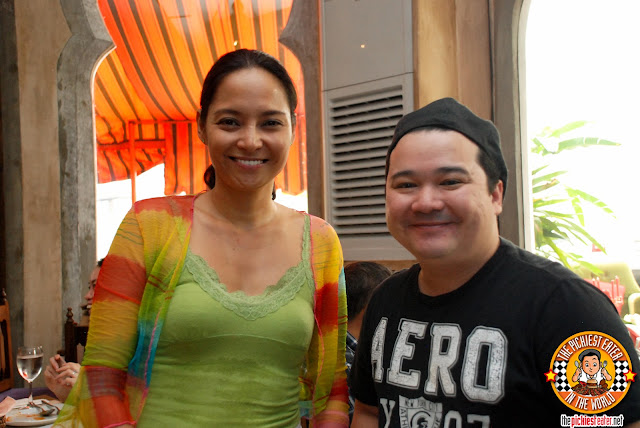 With the brains behind the kitchen and Co-owner of Kasbah,
the lovely Mrs. Madonna English. 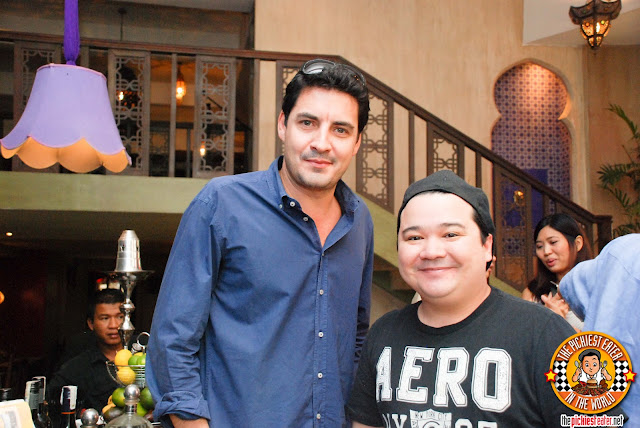 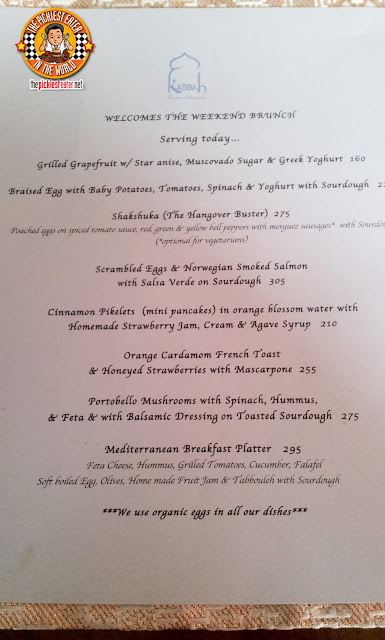 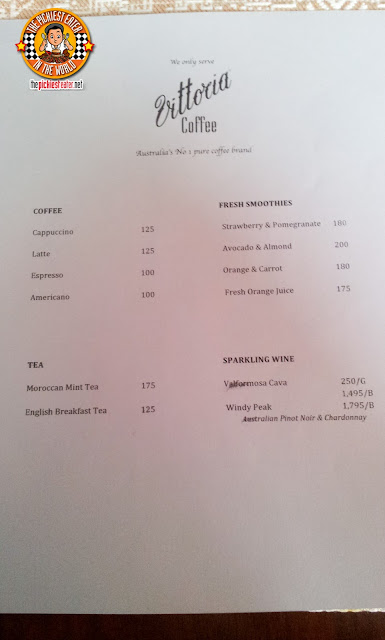