WHAT ABOUT BREAKFAST AT CAFE 1771? 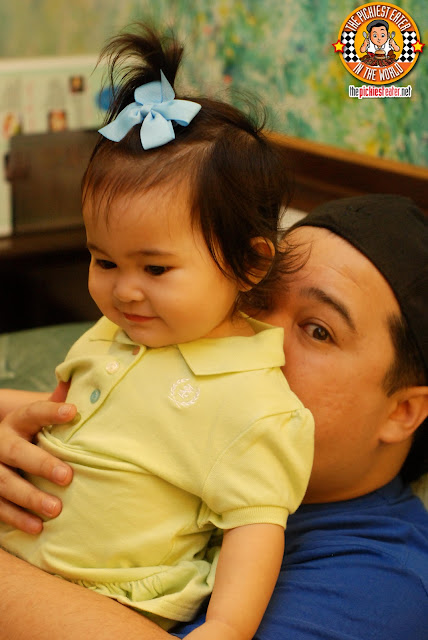 I forgot to take a cover photo, so here's a picture of Rain, taking delight in squishing my face.

I'm a big breakfast guy.. I'm fairly certain I've said that more than once on this blog. It's funny because I don't get the chance to eat breakfast on a daily basis. I wake up, get ready for work, and the first meal of the day is whatever i'm having for lunch. But when Rina and I got the opportunity to taste some of the items of Cafe 1771's breakfast menu, there was no way we would pass that chance up! 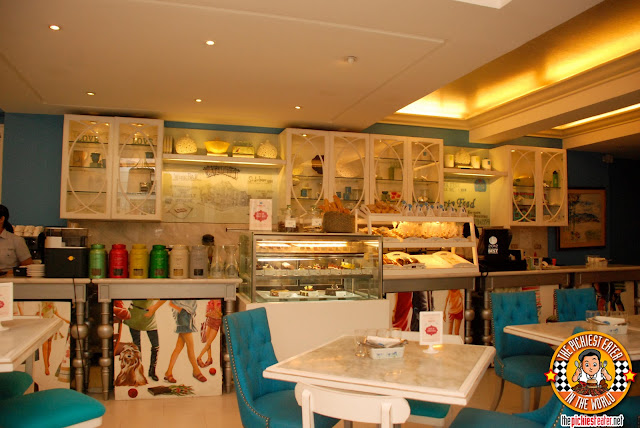 Nonetheless, both experiences were rather enjoyable, which is why I was looking forward to my visit to Cafe 1771.

My first impression of Cafe 1771, was that it was very welcoming, with its soothing blue and white hues. For a second it felt like I was in the kitchen of someone's suburban home. 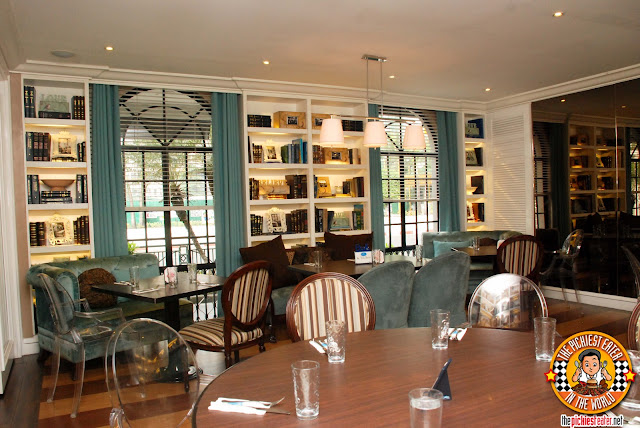 I'm not certain if this was actually part of the original structure, but there is another section of Cafe 1771 that had a completely different design. This time, the dainty atmosphere of the cafe turned into a more subdued tone, and the atmosphere felt more like you were in a "study" than a cafe. Though it was different, the environment still felt very relaxing and comfortable. 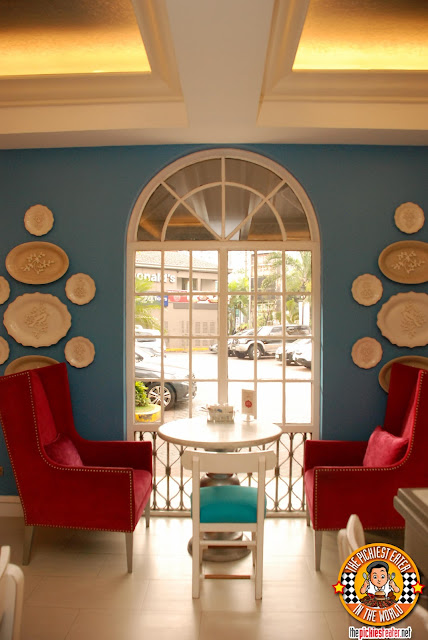 I could imagine myself spending an entire afternoon here, just munching on some delectable pastries and heavier fare. 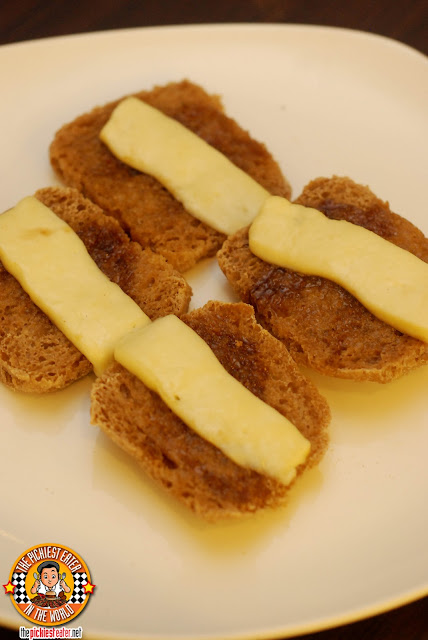 If you're looking for something light to start your day, the Melted Kesong Puti (P200) could be just what you're looking for. Toasted pieces of Whole Wheat Pan De Sal smeared with guava jam and topped with a slice of goat cheese. Although personally, I would find it a waste to go out to a fancy restaurant such as Cafe 1771 and just order pan de sal.

I did enjoy the mix of the Kesong Puti and the sweetness of the guava. But as delicious as this was, the cheese was melted enough for my liking, and the pan de sal could have used around 30 more seconds in the toaster for a nicer crunch. The waitress would have been willing to take this back and throw it in the toaster, however we were with other people and I didn't wanna seem so.. umm... "Picky". hehe. 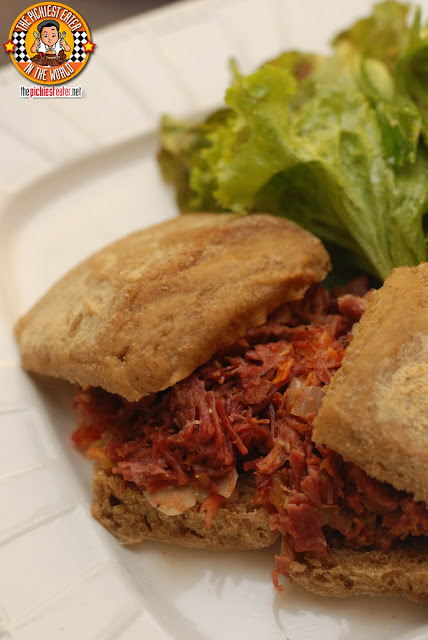 If you want something a bit heavier without feeling too bloated (Story of my life) you can try some of their Whole Wheat Pan De Sal's including the  Whole Wheat Corned Beef Pan De Sal (P200). This had a generous helping of chunky sauteed corned beef sandwiched between a toasted Whole Wheat Pan De Sal. They also offer other Pan De Sal variants, particularly Adobo Flakes (P210), Kesong Puti with Longganisa (P270), and Beef Tapa with Sauteed Onions (P250). 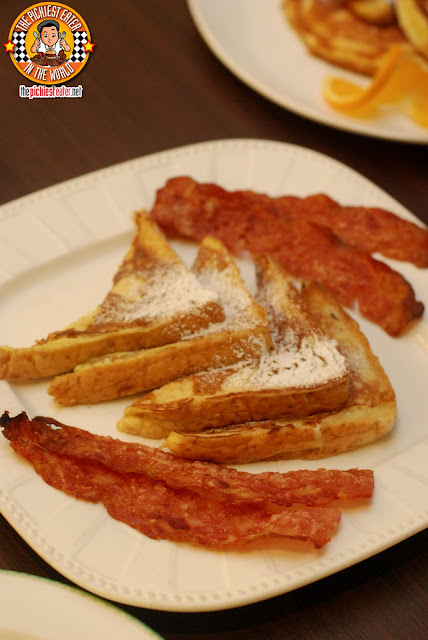 A breakfast dish that I really enjoy is French toast, so I was looking forward to trying Cafe 1771's French Toast With Bacon (P320). The French Toast was soft, without being mushy, and had a delicate creamy sweetness embedded into it.

The bacon was deep fried to a gorgeous crisp, and there seemed to be some sort of light batter on it that gave it an added crunch. However, my only problem with this dish, and please note that this is my personal preference, is that the bacon Cafe 1771 uses is extremely lean.. Meaning there was nary a trace of fat. Normally that should be a good thing, because it means its healthier than the traditional bacon, but when you're feeding The Pickiest Eater In The World, not so much.

Nonetheless, even if I felt that the bacon needed more fat in it, I still think this was pretty darn good. I didn't even notice that I didn't look for maple syrup anymore. 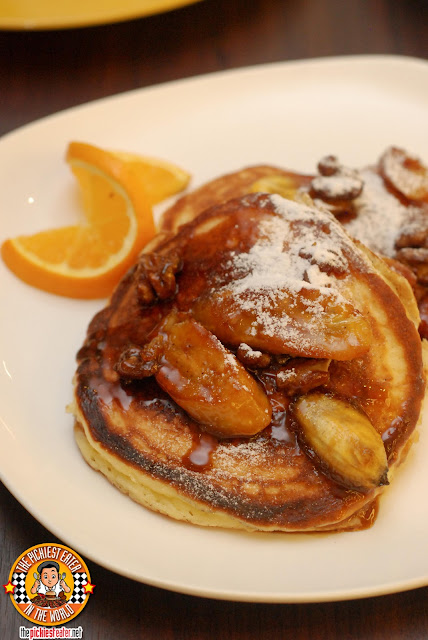 The winner here was the caramelized bananas and Candied walnuts. The bananas had a luscious but light coating of caramel and remained soft, while the walnuts and let out a sweet crunch with every bite. 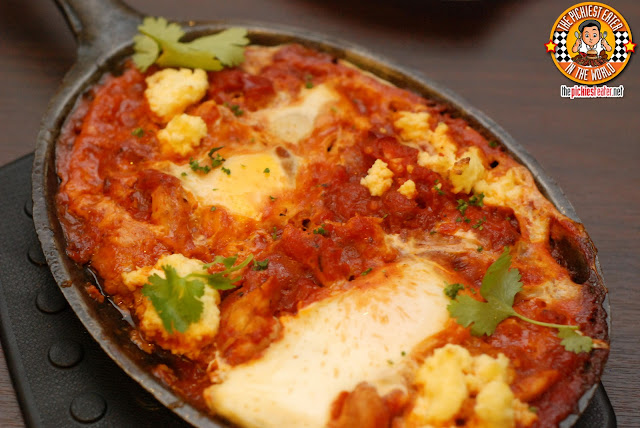 Because of its strong tomato base (I'm highly acidic), I refrained from tasting the Huevos Rancheros (P350), although I've got to admit, it smelled fantastic. Rina said that the rich flavor of the tomato blended perfectly with the ricotta cheese, baked eggs and Roasted Chicken Strips to form a party in her mouth. 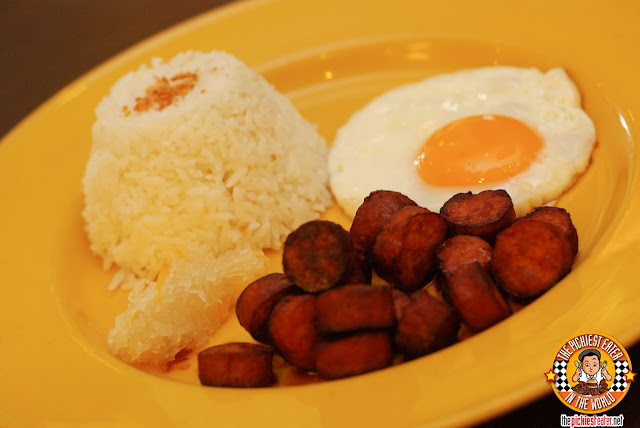 Rina is one person that needs a rice meal for breakfast. Don't even try to give her a breakfast dish with nothing but toast on the side. Rina isn't alone in that aspect, with rice being a staple in the Filipinos diet. Which is why it's good that Cafe 1771 also offers Rice meals Philippines being a   Spanish Chorizo (P380) 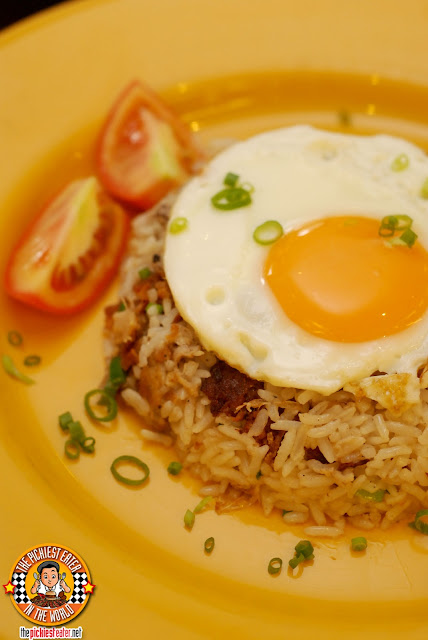 The Adobo Flakes Fried Rice (P250) was the best thing I tasted that morning - and that includes the bacon (although it was fatless, so it might be a little unfair to compare). Unlike the adobo flakes that I tried from Early Bird Breakfast Club (which I loved too btw), this had the adobo flakes already mixed into the garlic rice, as opposed to it being a small pile. I think what made this even more flavorful, was that I believe the oil used in making the adobo, seemed to be the same oil used in making the rice. It did lack a bit of the crispiness that I associate with adobo flakes, but the flavor itself was just so amazing that you won't even notice that anymore.

Other rice meals are available as well (See the menu below).

I got a good glimpse of the awesomeness of Cafe 1771's Breakfast menu, leaving me ecstatic to try what their lunch and dinner menus have to offer! 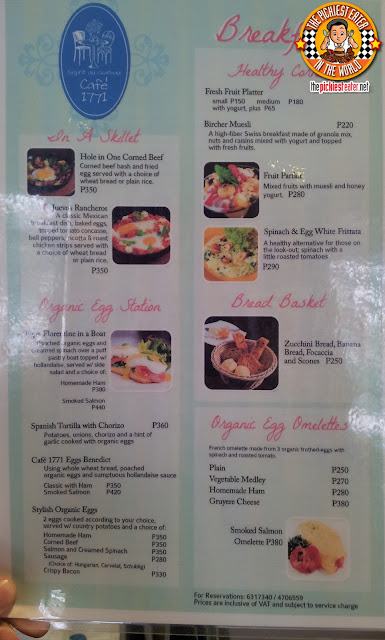 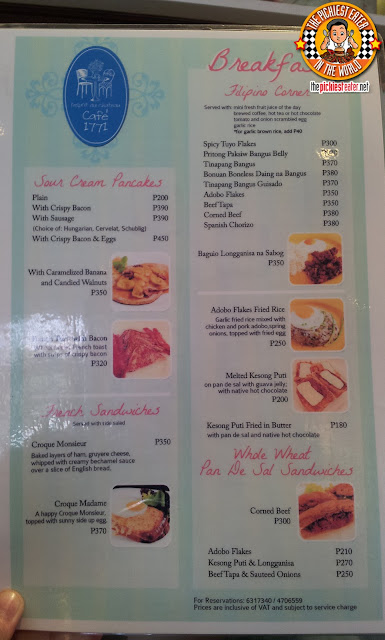 Email ThisBlogThis!Share to TwitterShare to FacebookShare to Pinterest
Labels: 1771 Group Of Restaurants, Bacon, Breakfast, Cafe 1771, El Pueblo, Ortigas, Where to eat At El Pueblo, Where to Eat at Ortigas