HANGING OUT AT BACKYARD KITCHEN + BREW

I said I wasn't going to post anymore until 2015 but I just couldn't wait any longer to share with you my experience at one of the metro's newest restaurants.. 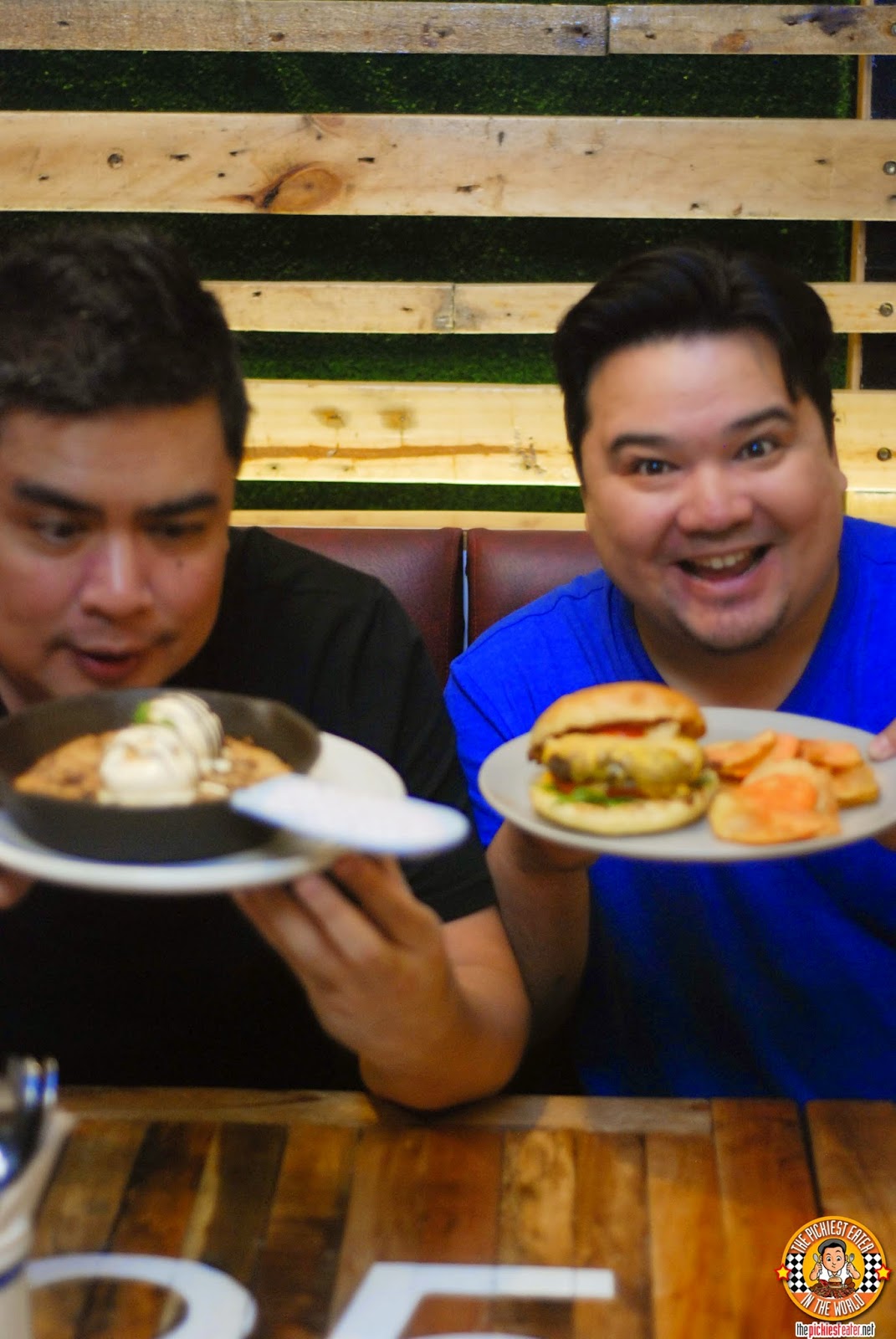 I'm going to say this the manliest way possible. I think Chef Edward Bugia is my (Soulmate) brother from another mother (Fistbump). I'm talking about the man behind Pino. The very same person who conceptualized The Burger Project. The man that brought Breakfast & Pies into our lives. Yeah, that dude.

His dishes often seem as if it were culinarily (is that even a word?) engineered to exactly suit my taste buds.
However, Chef Ed's newest restaurant, Backyard Kitchen and Brew, is his take on the whole Farm to Table Concept, but at the same time, he shows us what it would be like to have a relaxed BBQ at his place.


Backyard Kitchen + Brew is the newest restaurant that has sprouted in the burgeoning Food Mecca known as U.P. Town Center. The place has grown exponentially since my last visit, and with all the stairs around the area, it would be a nightmare for a man with a large stomach and short legs. 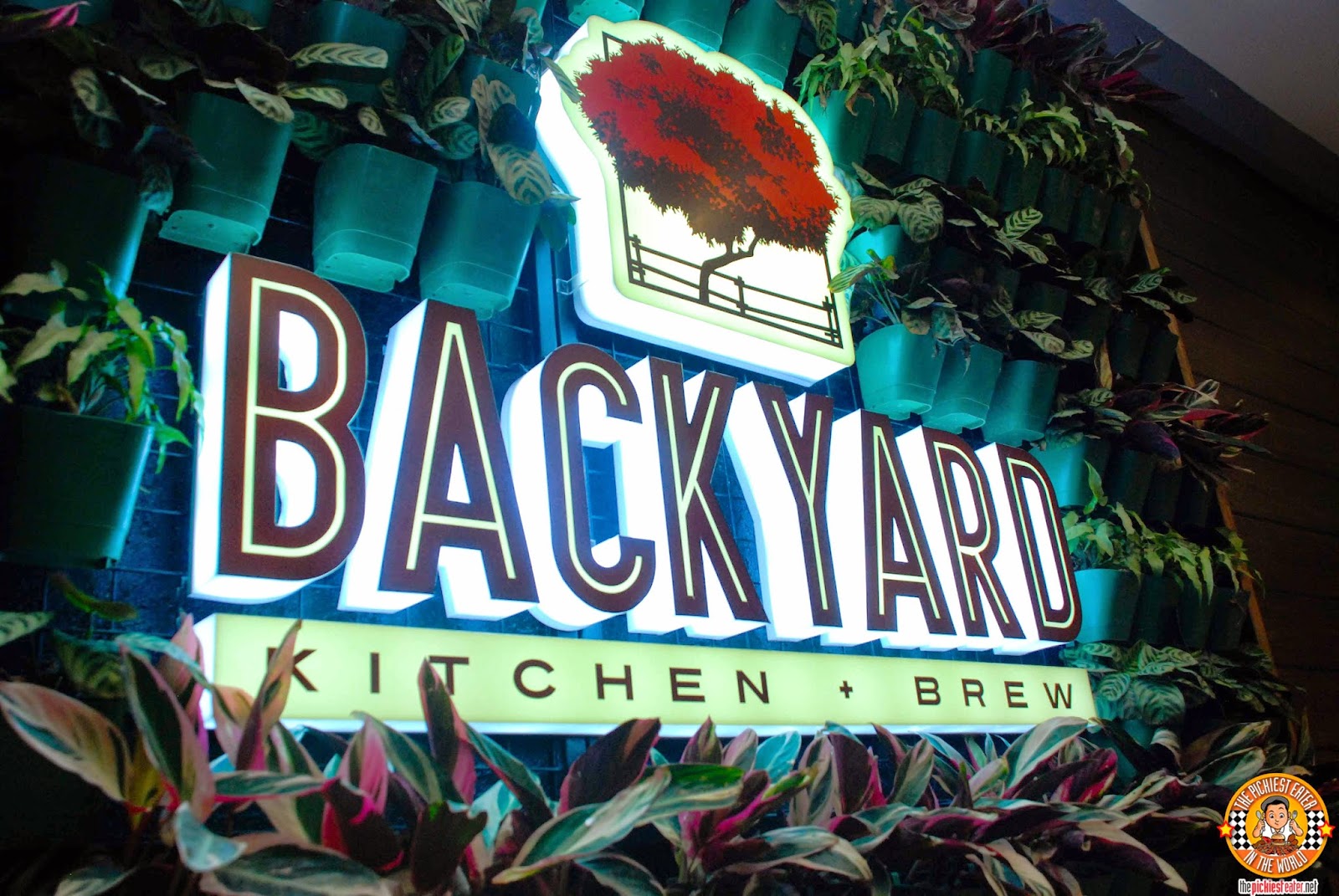 Backyard's use of the Farm to Table concept is indeed a bold move, because we live in a country where people are attracted to products, be it meat or vegetables, that are imported from far off lands before landing on to your plate (guilty). Let's face it, to most people, a U.S. Certified Steak sounds more appetizing then one that came from Batangas, right?

Chef Ed hopes to help enlighten us with what the benefits of a farm to table restaurant can bring, with the biggest being able to help local farmers in their trade. Yes, we all enjoy a dishes from international chains, making these businesses bigger and bigger. Let's face it, if the chain does well, it could mean a new car for the big boss, and huge bonuses for the managers. Nothing wrong with that.. that's how the business works.

But dining in a farm to table restaurant allows for the continued business with farmers. And success for farmers doesn't exactly mean lavish bling-bling. It means tuition for their children. School Uniforms. You get the drift.

One of the best lessons I learned that evening in Backyard was that "Farm to Table" necessarily doesn't have to mean "Vegan" or "Health food" either. Chef Ed showed us how to be able to support local suppliers and still ensure his customers of the excellence his restaurants have been synonymous with. 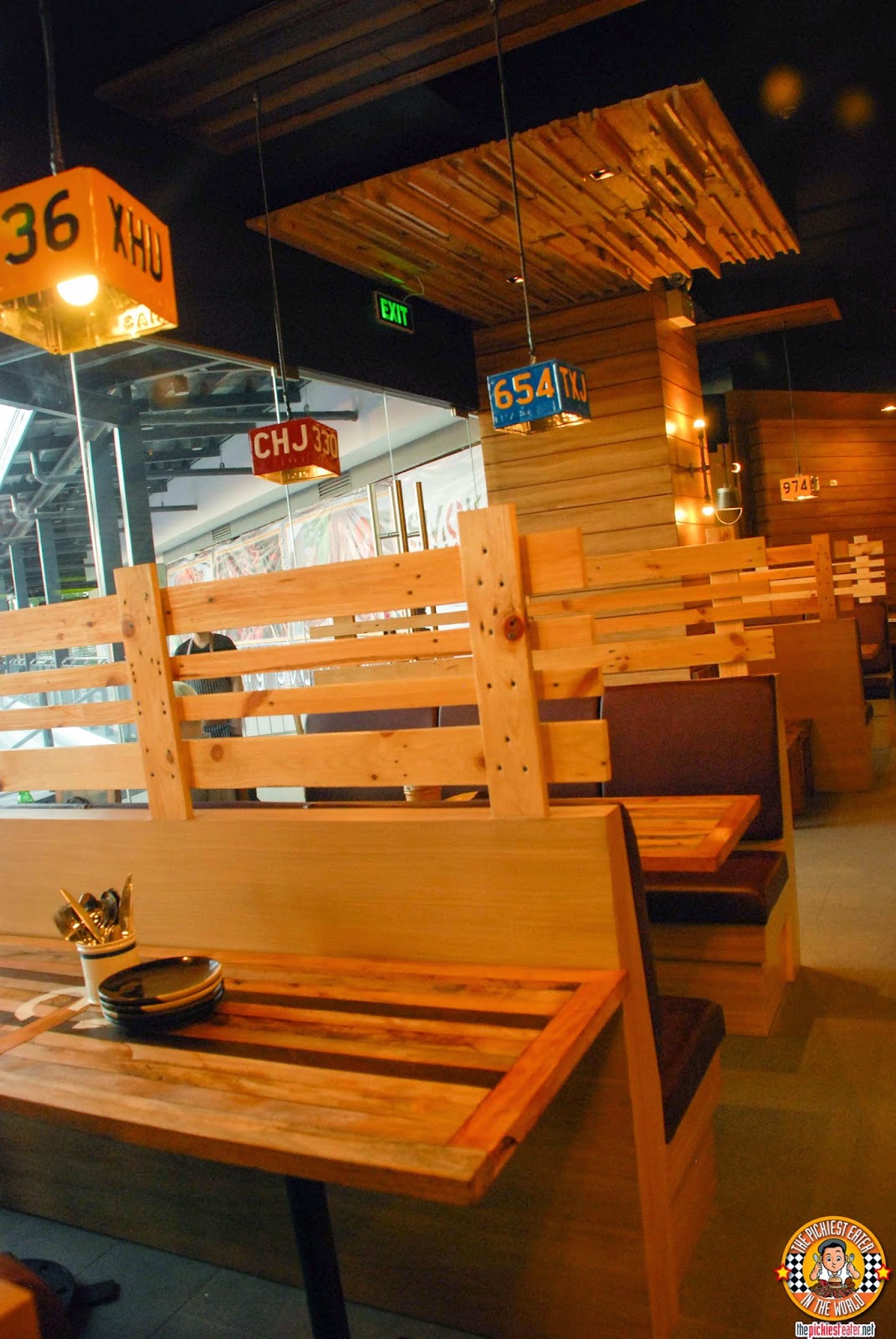 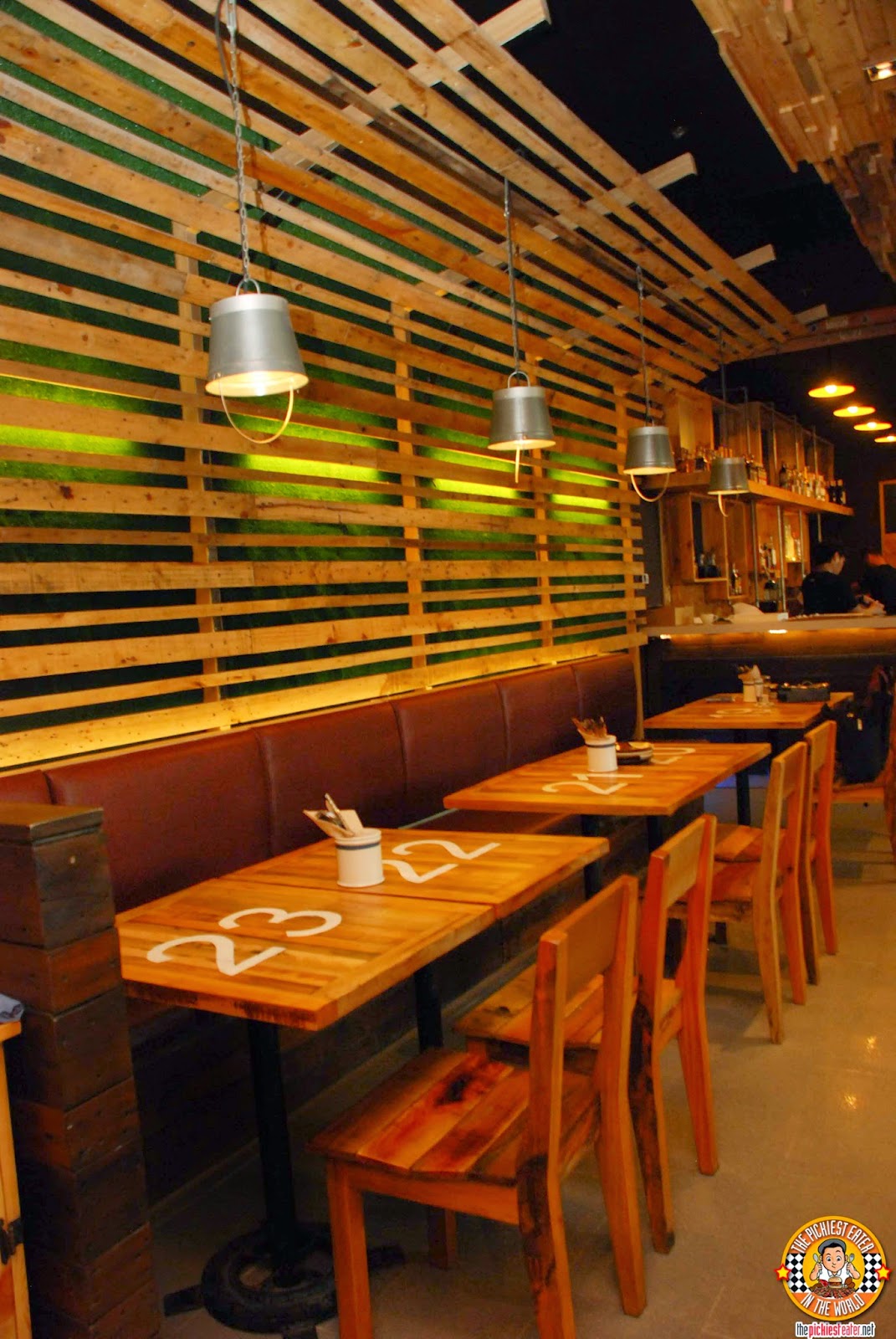 The wooden interiors of Backyard really captures the essence of the rustic vibe that it aimed to exude. I felt I was eating in a farm house of some sort. I wouldn't have been surprised if I saw stacks of hay on the side of the large dining area. 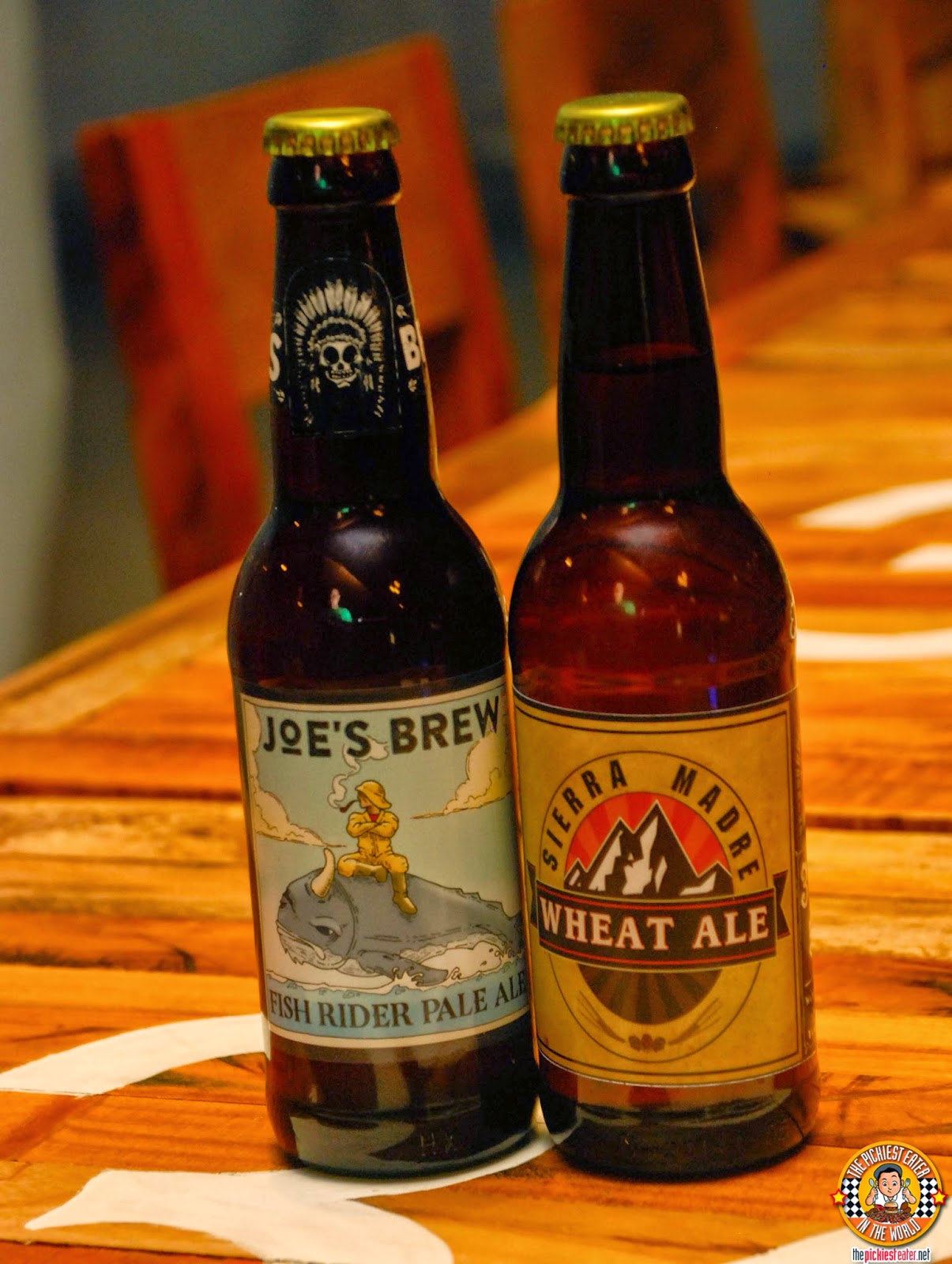 Whether you enjoy a cold one before, during or after a meal, beer lovers will be stoked to see the selection of crafted beers that Backyard has on hand. 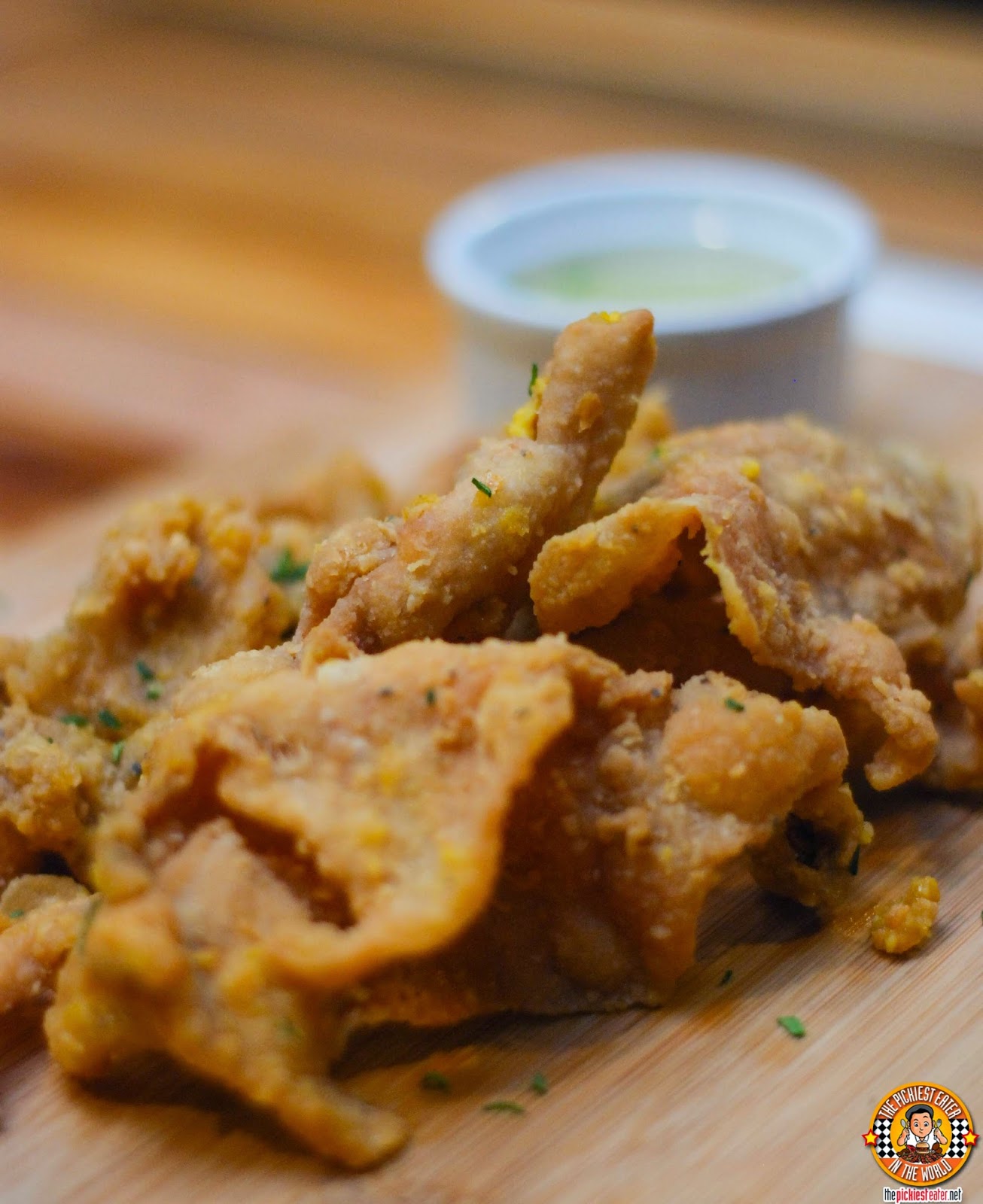 For your starters, I cannot stress enough how much I enjoyed the Salted Egg Chicken Skin (P205). I LOVE deep fried Chicken Skin, and throughout the course of this blog, I've had some pretty wonderful dishes, and this is definitely among the best that I've had.

Strips of Chicken Skin, are coated in a light batter and deep fried to golden gorgeousness, with the fried skin glistening with speckles of Salted Egg Yolk. The dish is served with Chili Pineapple Vinegar, which offers a nice collusion of heat and acid, with a gentle touch of sweetness. 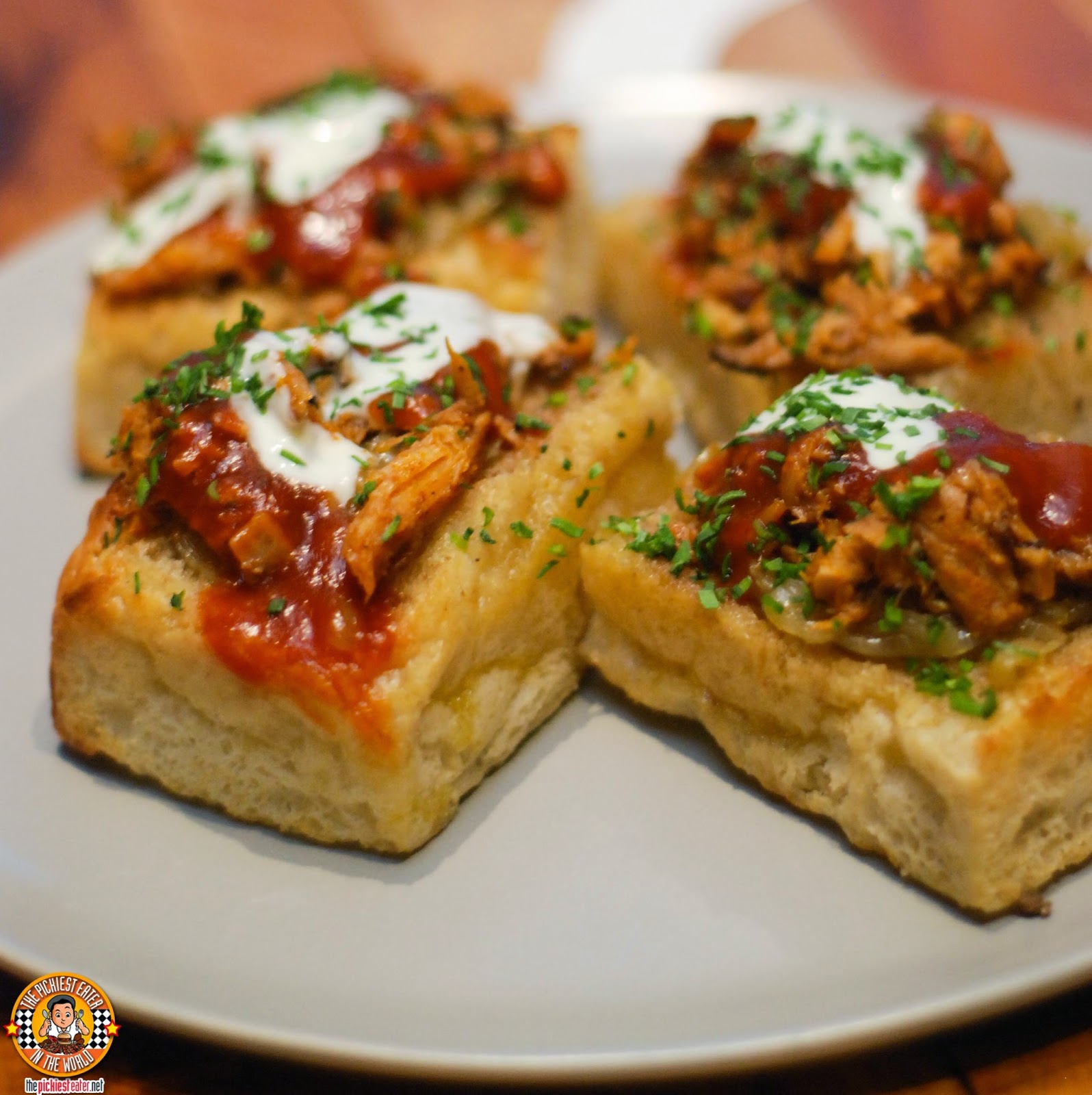 Chef Edward then continued to prove to me that we must have been related in a past life, when he brought out the Ciabatta with Whipped Bone Marrow and Pulled Pork (P255 for 2pcs/ P495 for 4pcs). Toasted Ciabatta slices are smeared with Melted Whipped Bone Marrow, and topped with thick chunks of Pulled Pork, made in a Rhum Coke infused BBQ sauce. The toast is then finished with a drizzle of Sour Cream that acts as a nice balance to the light tartness of the sauce. 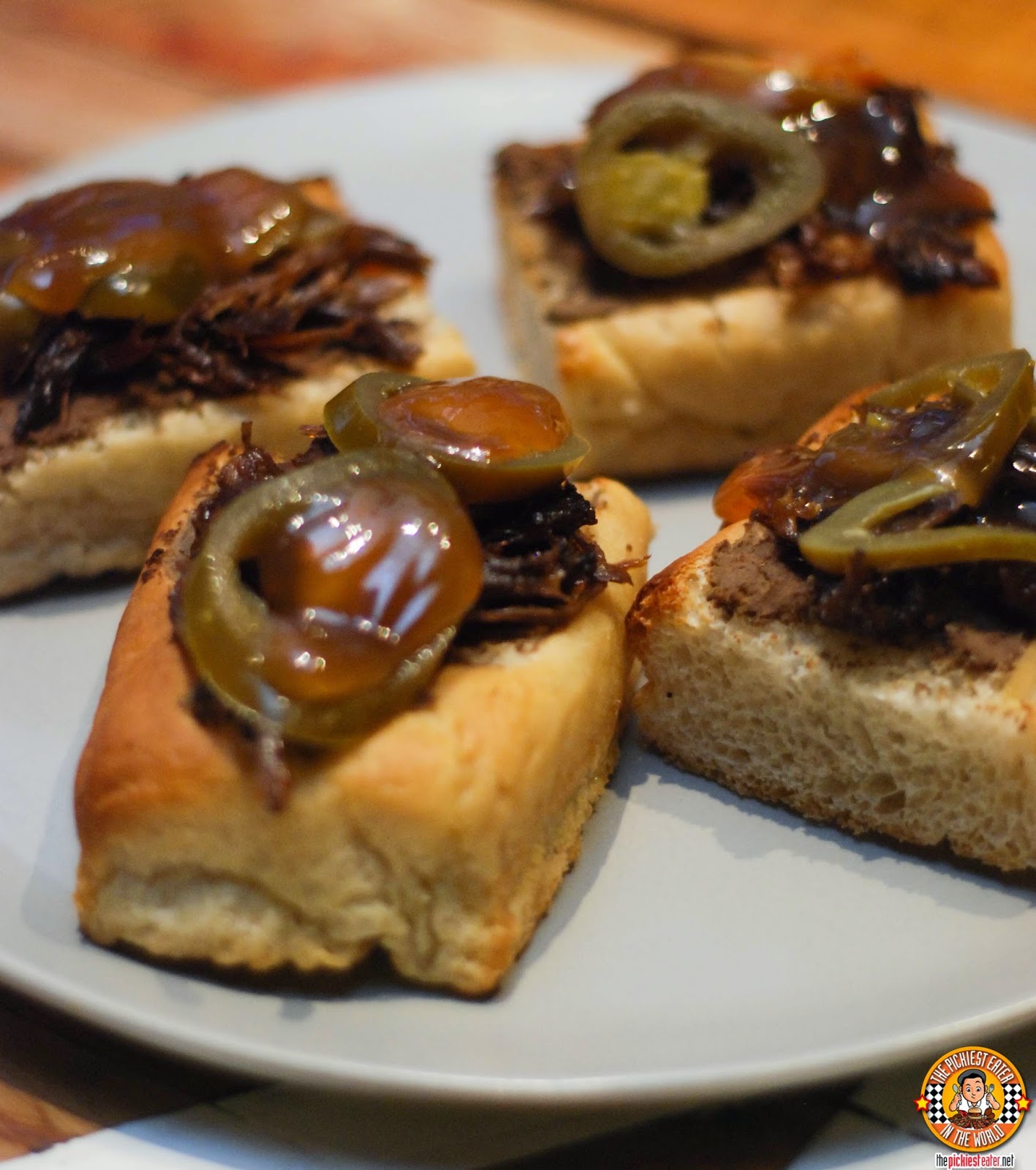 If you find the pulled pork too heavy as a starter (wuss), then you might want to opt for the Ciabatta with Local Duck Pate' & Duck Flakes Ciabatta Toast (P255 for 2pcs/ P495 for 4pcs). Chef Edward made use of local duck liver and turned it into a rich pate', with a healthy spoonful smeared on the Ciabatta Toast. The toast is then topped with shredded duck meat, stewed into a delicious adobo. Jalapeno slices provide a punch of heat, that is beautifully balanced with a dollop of Guava Jam. 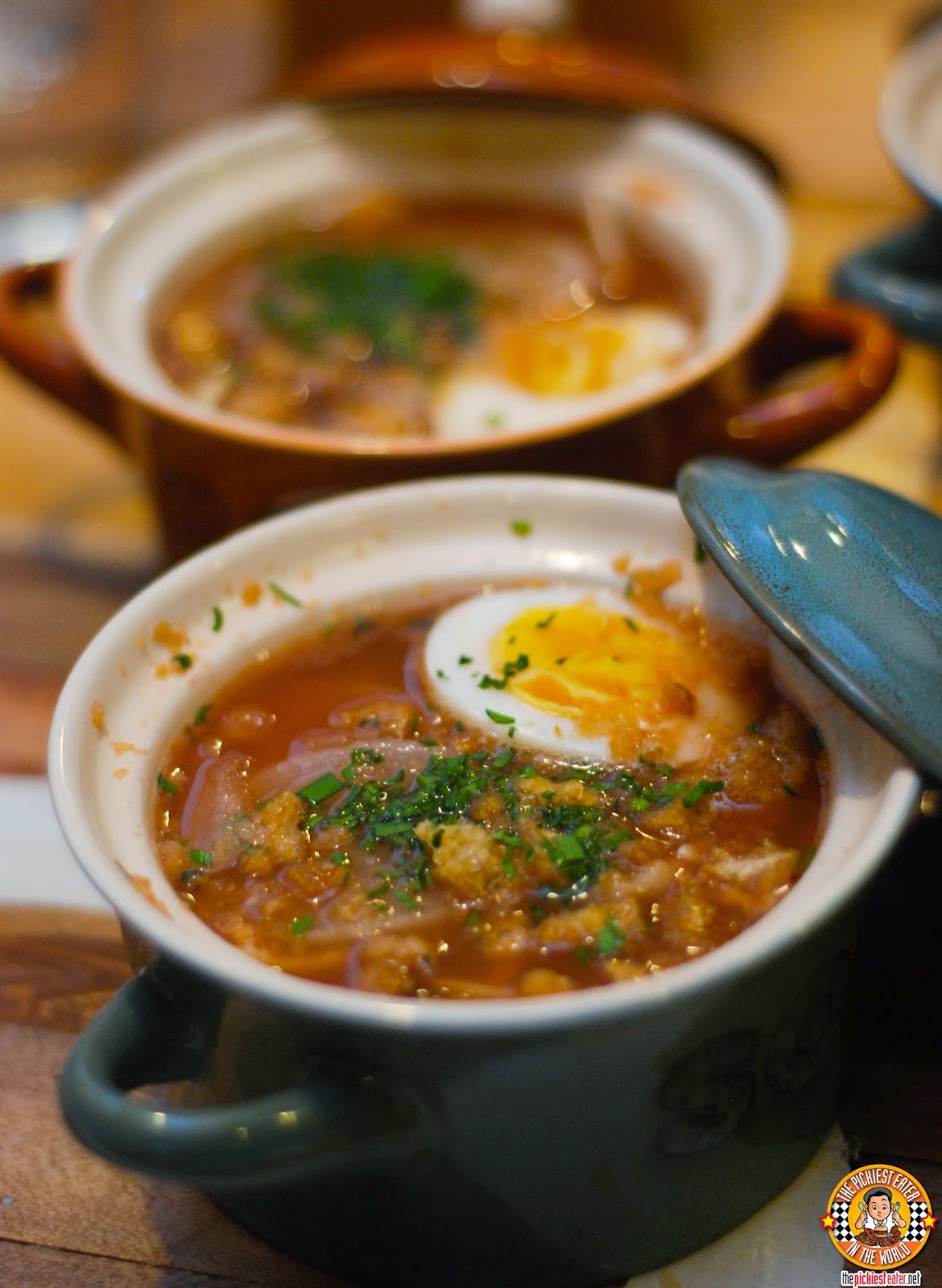 Chef Ed has a knack of taking two classic Filipino dishes, and fusing them together to make one amazing creation (See Pino's Kare-Kareng Bagnet). Here at Backyard, his newest experiment was quite daring, because it took two popular pinoy soup dishes, and fused it together into what is destined to be added into the Pinoy dishes Hall of Fame.

And so, the Sinigang na Batchoy (P195) was born. Pouring Kare Kare sauce on Bagnet was undoubtedly brilliant, but finding a way to bring Sinigang and Batchoy together into one cohesive bowl of soup was sheer genius. 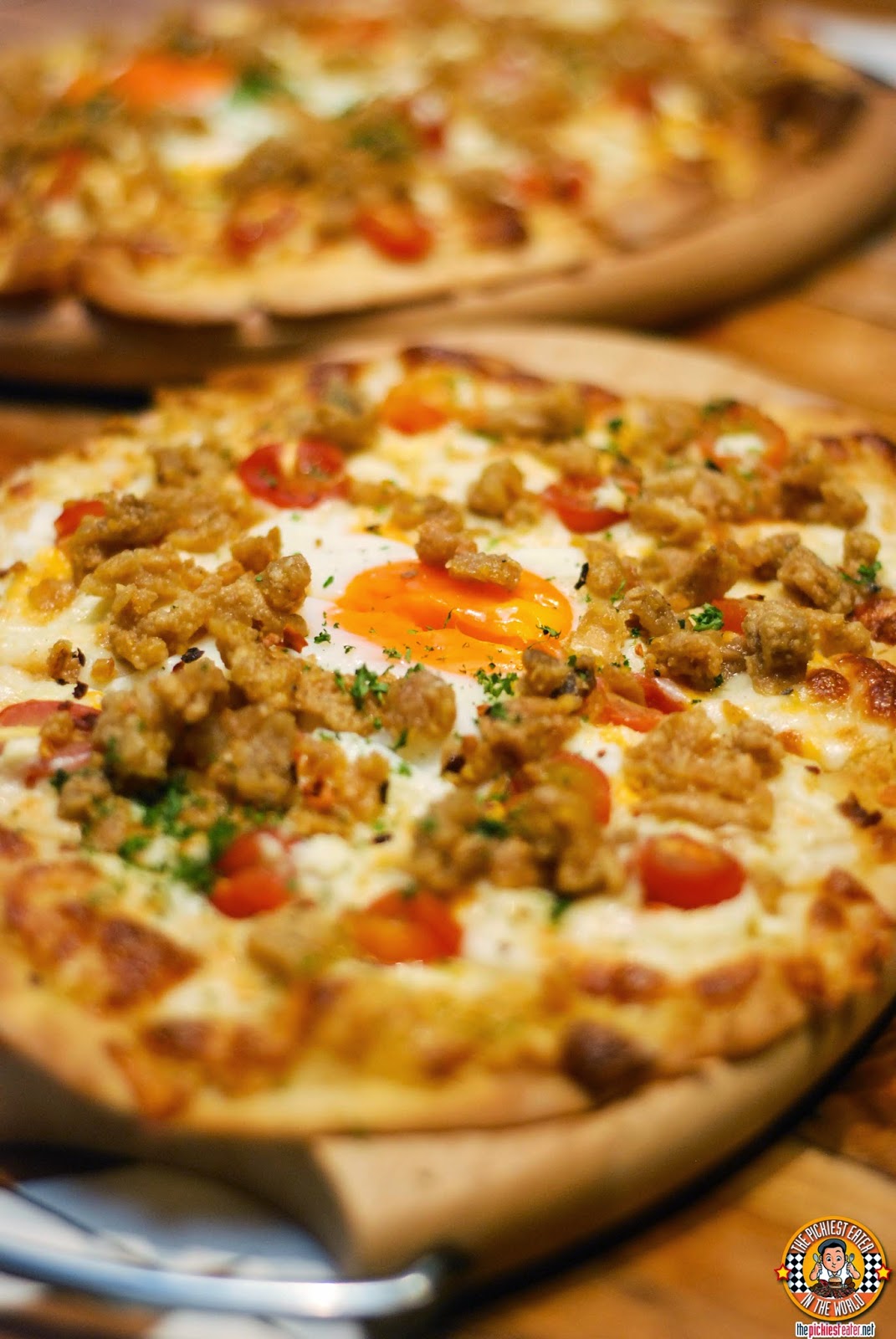 Next up was the Salted Egg Chicken Skin Garlic Flat Bread (P255). Bits of that Crispy Chicken Skin with Salted Egg Yolk that I was just raving about earlier, laying on bed of Garlic Flat Bread. The bread is peppered with sliced Cherry Tomatoes, and topped with sprinklings of Mozarella and Ricotta cheese, with the egg in the center serving as the crowning centerpiece.

The amazing thing about this flat bread is how the crust maintains the integrity of crunchiness, even when you fold it. Yes, you can actually fold it, without it losing its crunch. 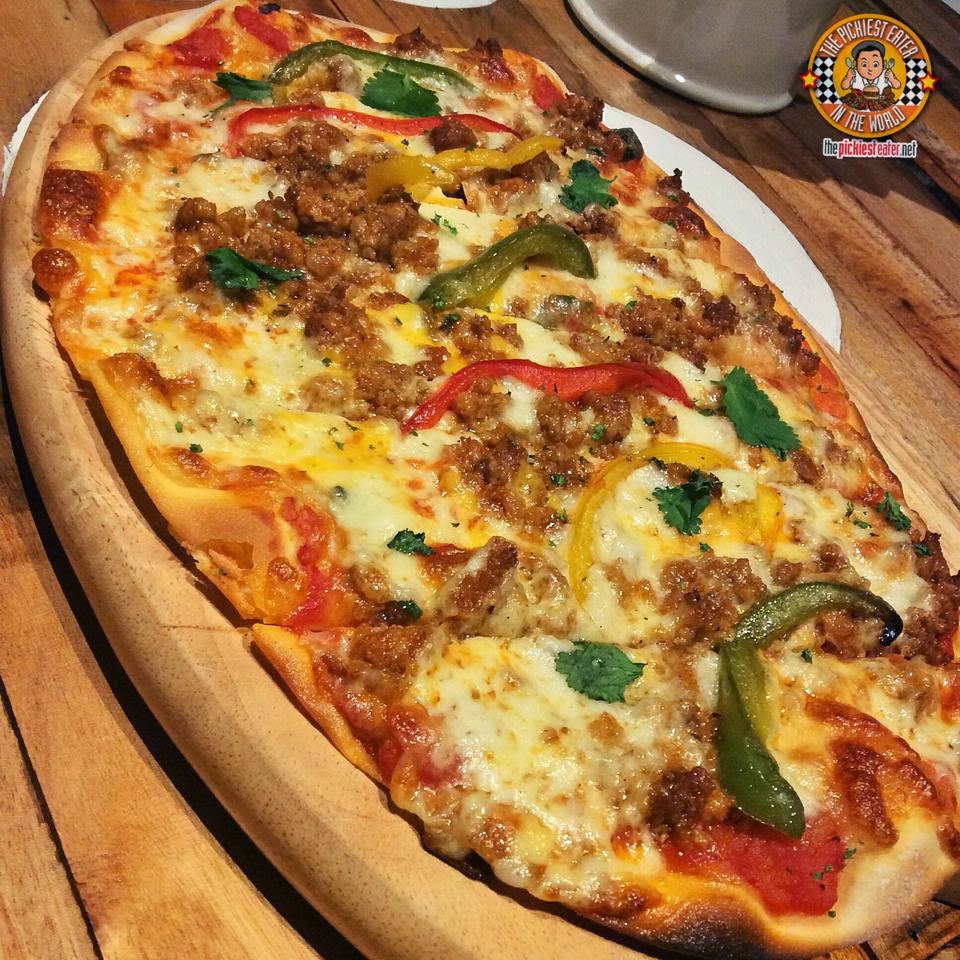 Another Flat bread that you must try is the Longaniza & Peppers (P255). Imagine Homemade crumbled Longaniza, mixed with three types of Roasted Bell Peppers, and again with Mozarella & Ricotta cheeses. Despite the fact that this was tomato based, I ended up eating more slices than I should have, and in fact forgot to take a picture with my DSLR, so i'm sharing the one I took for my Instagram account instead. 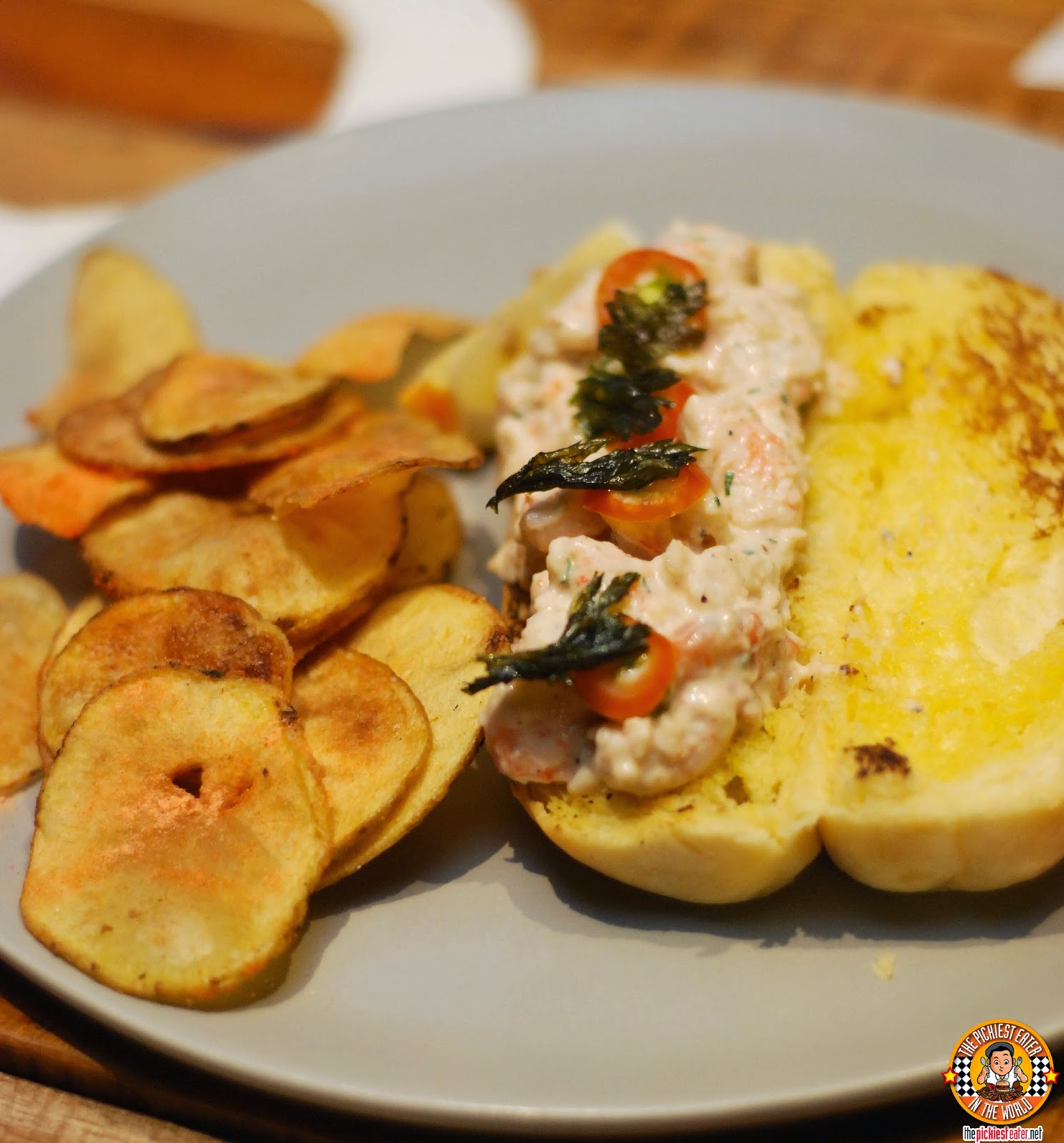 My wife is going to go ballistic when she tries the Lobster & Prawn Roll (P325). A nicely toasted Buttered Brioche Bun, filled with Lobster and Prawn chunks, mixed together in a Lobster and Prawn mayo-butter dressing. The sandwich is garnished with Cherry Tomatoes, Fried Celery Leaves and a Papaya Slaw. 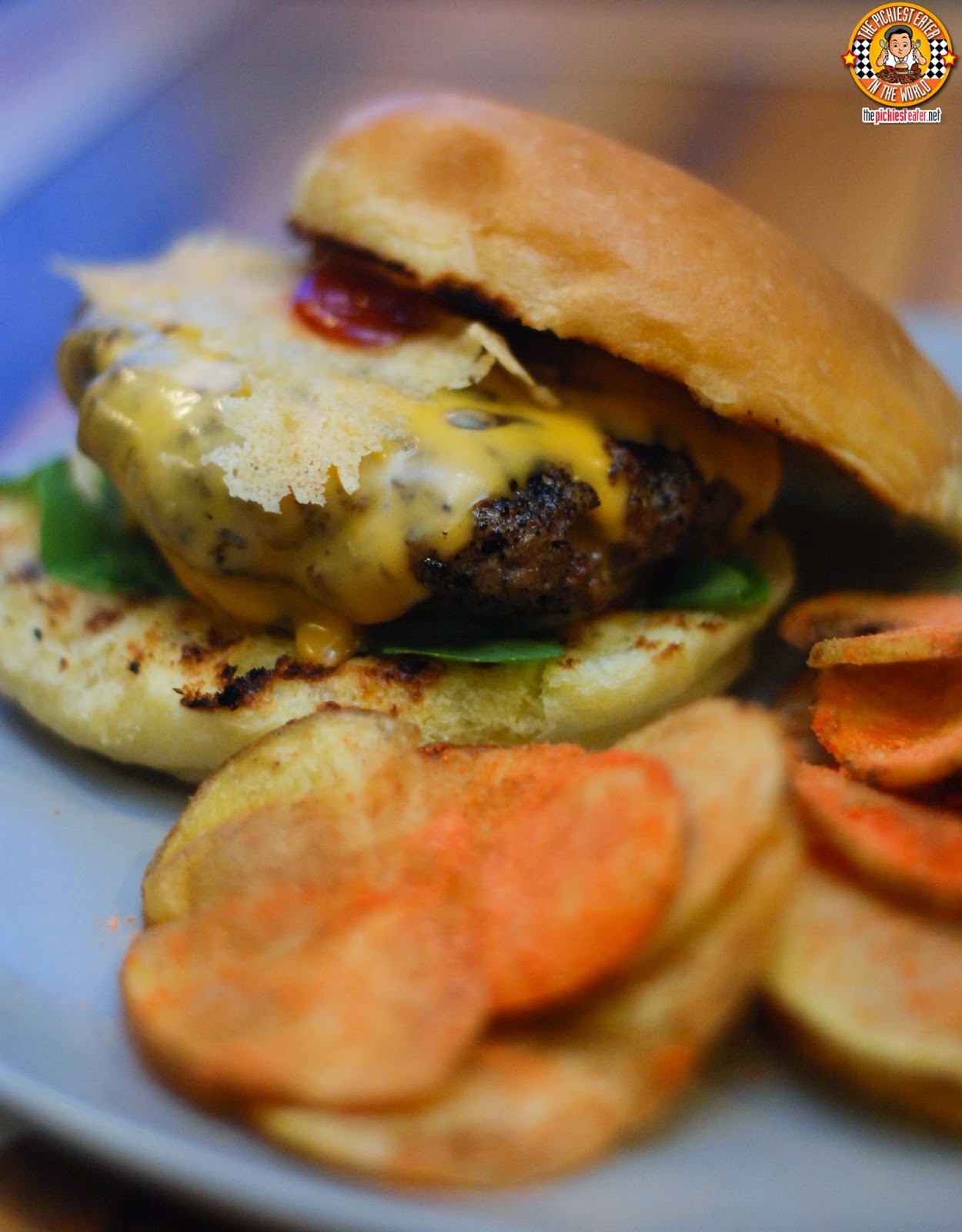 If there's another thing I know I can count on Chef Edward to do, is to create a kick ass burger (Speaking from experience). Which is why, when Chef asked if there was any other dish we'd like to try, I didn't hesitate to yell out at the top of my lungs, "BACKYARD BURGER!!!".

The Backyard Burger (P285) consists of a 100% Brisket and Chuck Beef Patty, enveloped in cheddar cheese, and topped with a Parmesan Crisp, tucked between a beautifully toasted Buttered Brioche Bun. The burger is then garnished with the classic fixins, Arugula, Onions, Tomatoes, and a squirt of Sriracha Ketchup.

Chef Ed brought out some pasta dishes, that is on the Backyard Menu.. 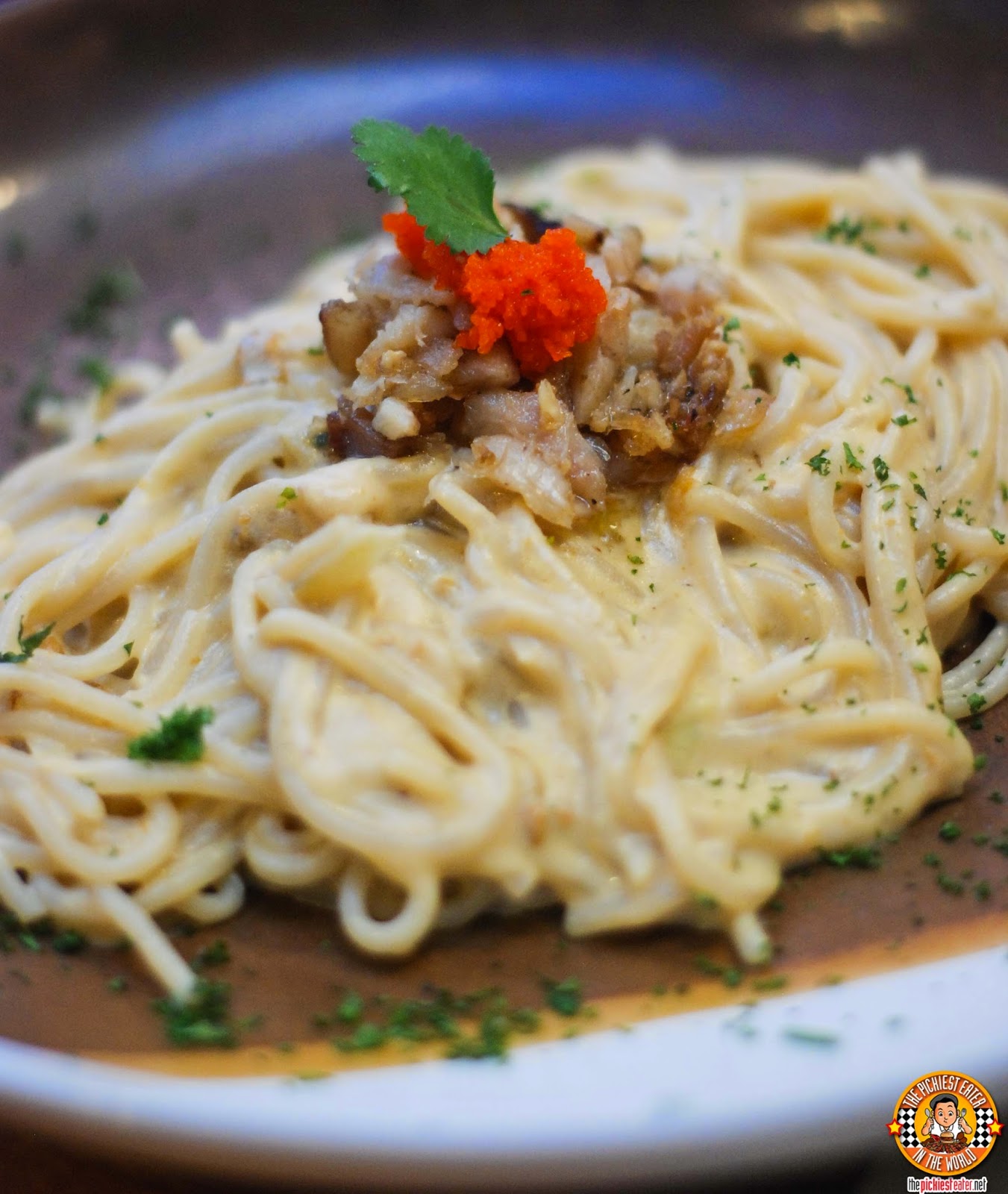 Starting with the Uni Carbonara (P275), which consists of an Uni Leek and Cream Sauce poured over a pile of Al Dente Fettuccine noodles, and a sprinkling of fish cheese Flakes, Tobiko (Fish Roe). 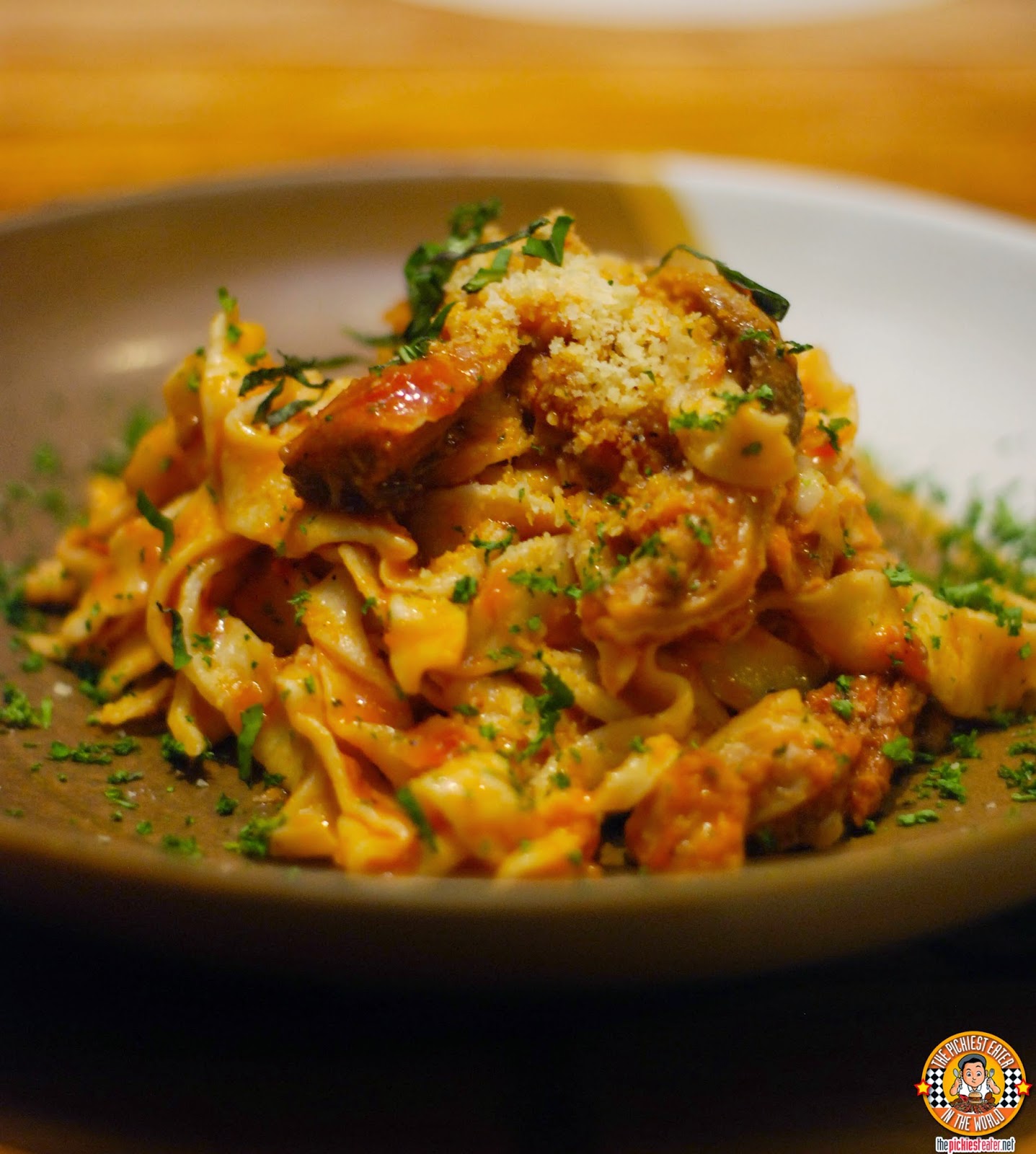 Another pasta dish was the Nose to Tail Fettuccine (aka All The Good Stuff) (P275). This tomato sauce based dish was made with Pork Cheek, Beef Brisket, Ox tripe, Chicken Liver, over a pile of Fettuccine pasta. 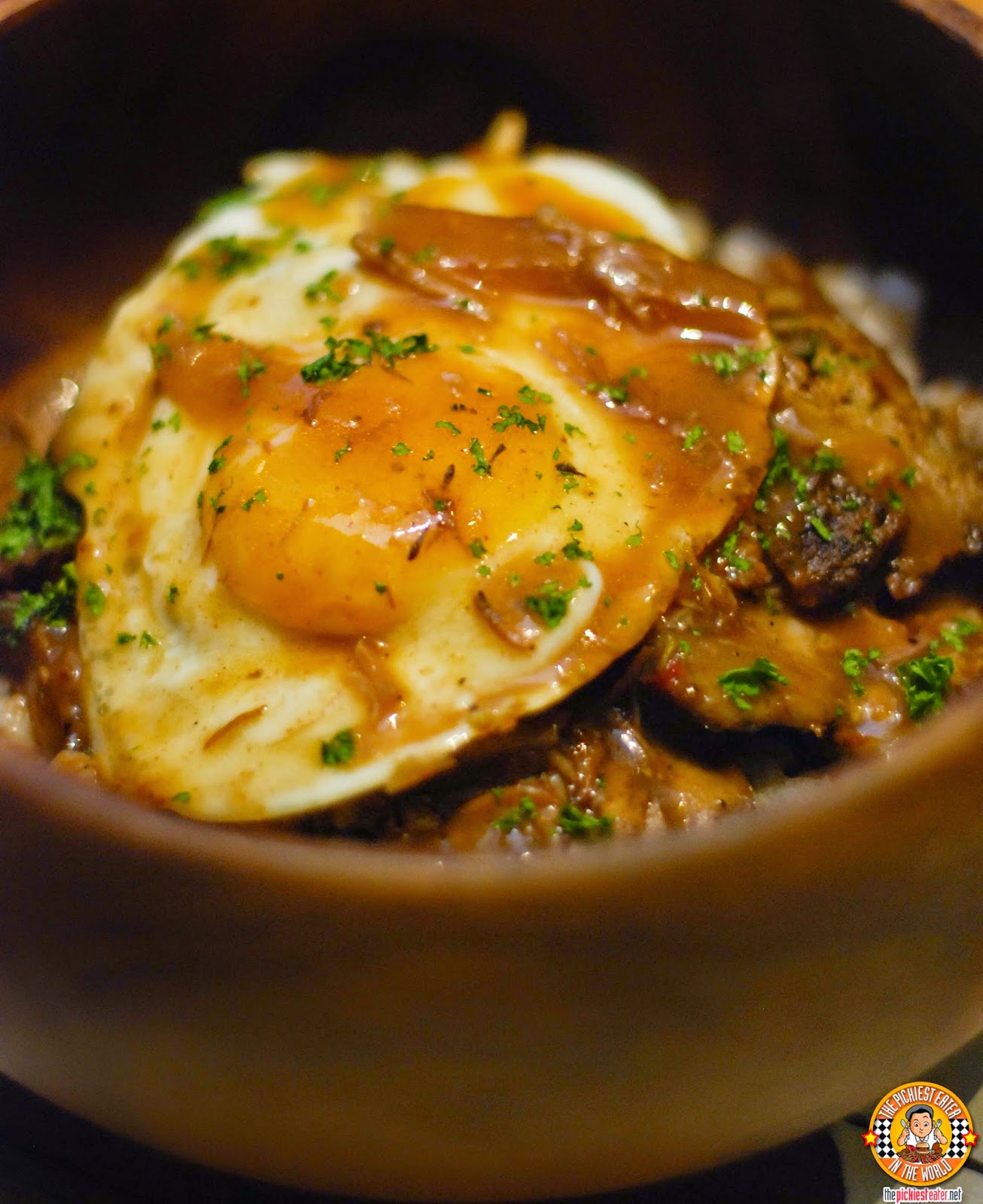 The Slow Roasted Beef Belly (P325) was nothing short of spectacular. Slices of immaculately softe Roasted Beef Belly, doused in a rich Mushroom Gravy, and topped with a fried egg, laying on a bed of Steamed Barley with Herbs. With the gravy being as delicious as it is, this is a dish that demands to be eaten with rice, so I would definitely skip the Barley.

There is a Slow Roasted Pork Belly version as well that we didn't get to try, giving me yet another reason to visit. 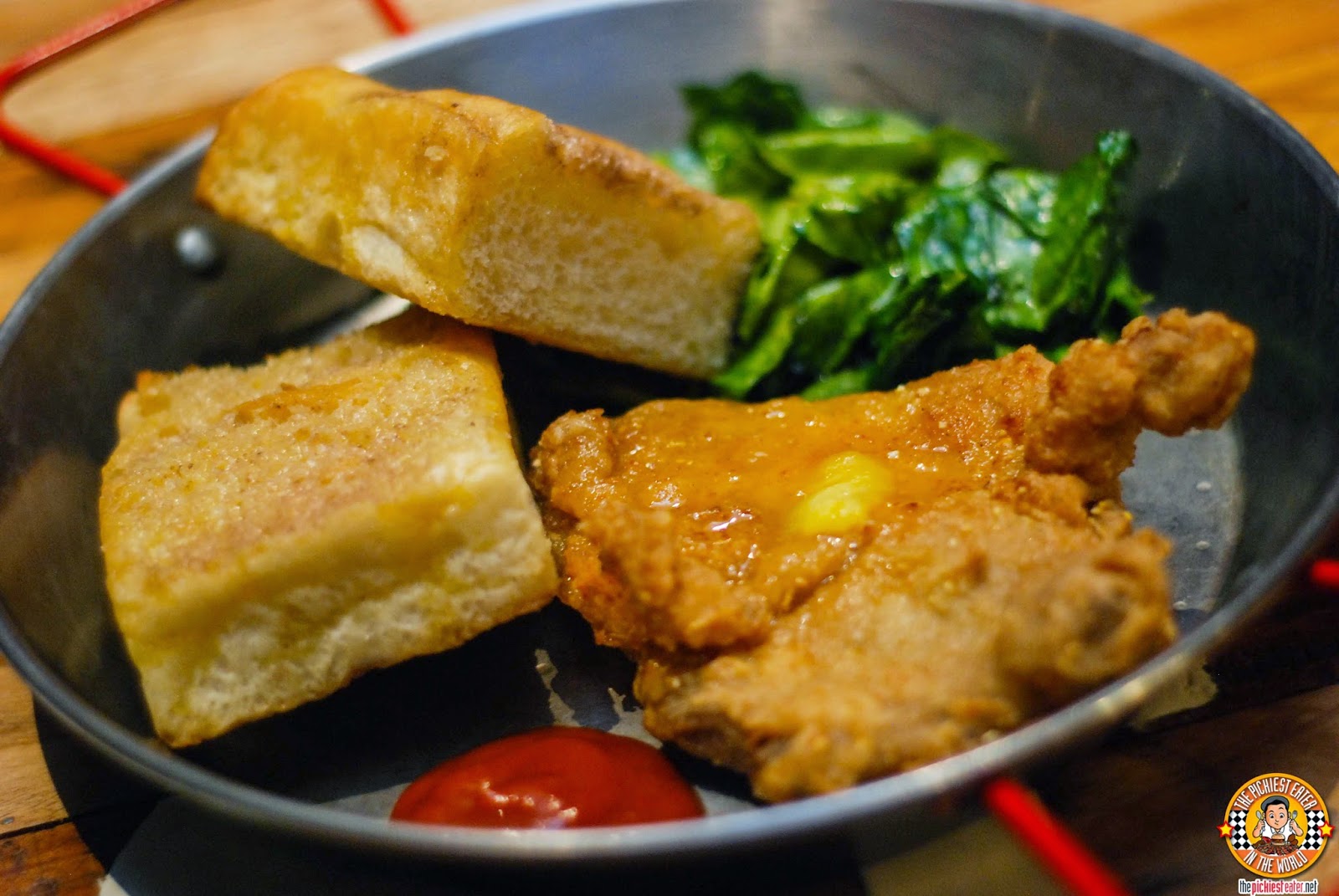 But the Waffle Breaded Fried Chicken (P305) is more than reason enough for me to visit again (not to mention Rina's threat to leave me if I don't take her soon). Eschewing the more commonly used Buttermilk that has become very popular, Backyard instead coats its chicken thighs with a luscious Waffle batter, creating a wonderful breading to go with the juicy chicken meat. The thighs are then topped with Maple Butter, and served with the Whipped Bone Marrow Toast that I love, and a side of sauteed Kale and a bit of Sriracha Ketchup.

One of the best fried chicken dishes in the metro today, no doubt about it. if you came from another country and could try one dish from one restaurant in Manila, I may very well recommend you this. 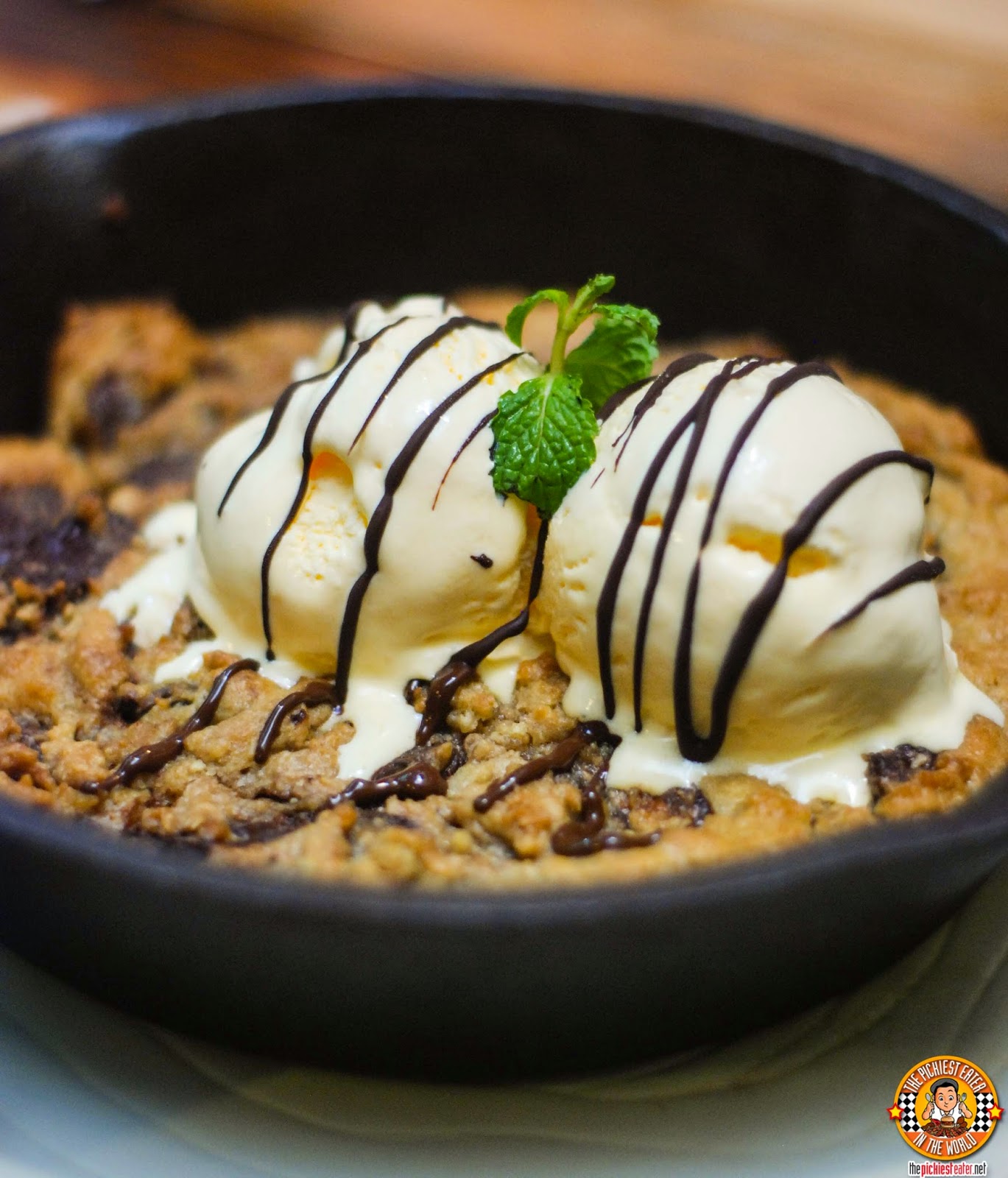 Ched Ed's finishing move that knocked us all out for a loop was his ersion of the Pizzookie (P385). Taking a recipe that he has been using since he was young, Chef Ed's baked to order Chewy Chocolate Chip Cookie is topped with creamy Mantecado Ice Cream, and a touch of Rock Salt that adds an incredibly dimension of flavor. 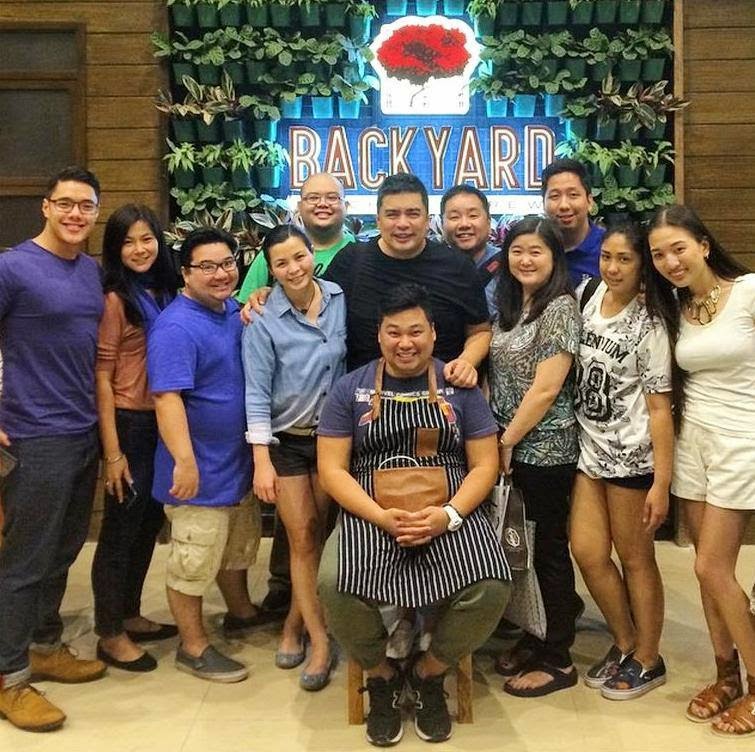 Congratulations to Chef Edward and his partners for his latest concept, which takes the whole Farm to table concept to a whole new level! Yet another welcome addition to the ever growing restaurants at U.P. Town Center!

Backyard got a resounding stamp of approval from me and my food loving friends!

BACKYARD KITCHEN & BREW MENU
As of December 27, 2014
(Plans to expand the menu may happen very soon) 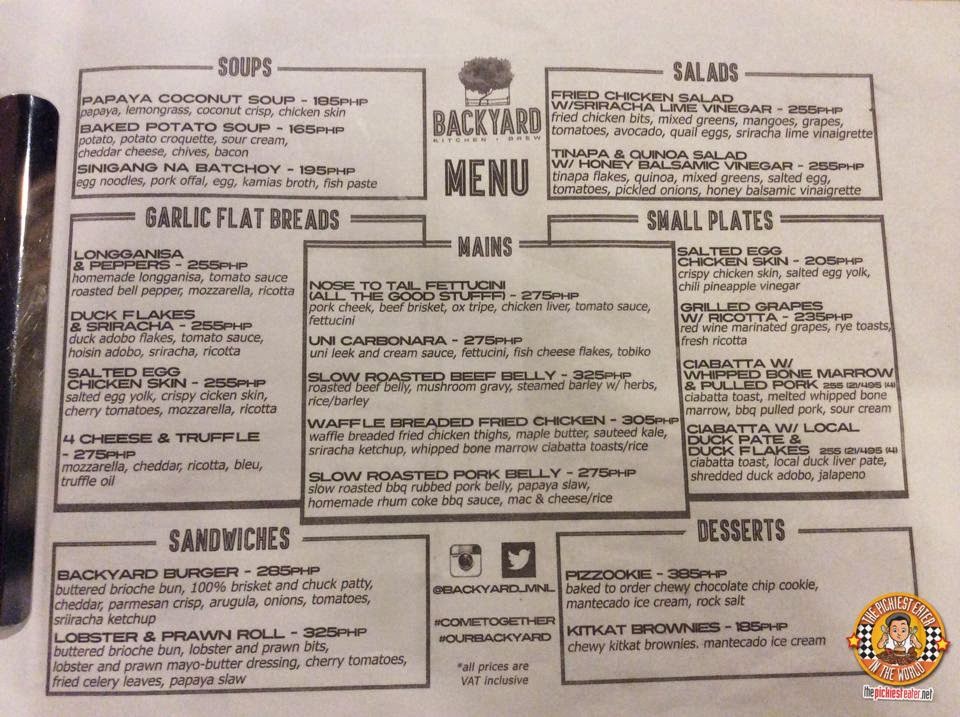 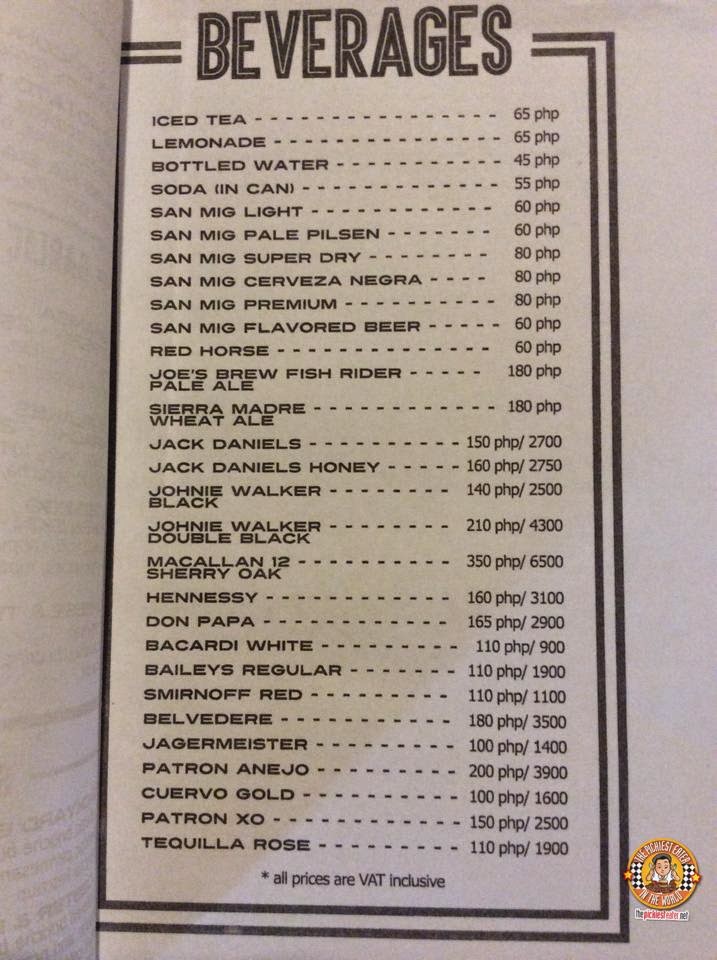 Posted by The Pickiest Eater at 1:07 AM