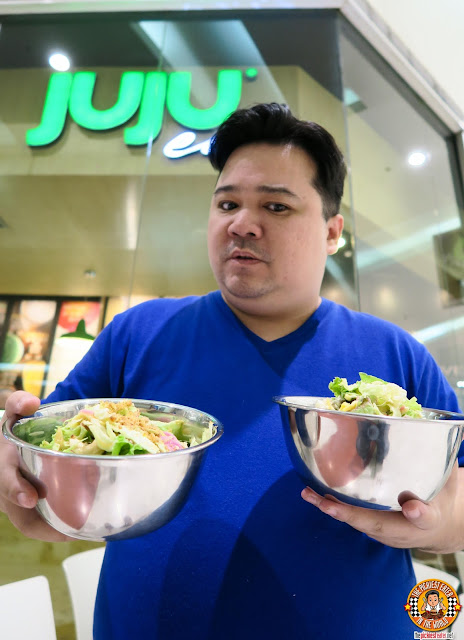 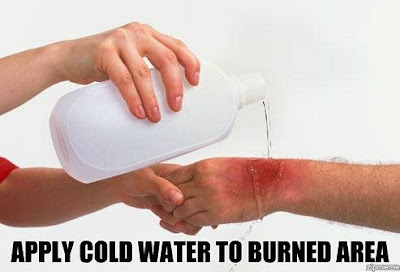 I know what you guys are thinking. This is NOT an April Fool's Day Post.

No Joke, I'm giving you my honest opinion about Salads, Wraps and the like! 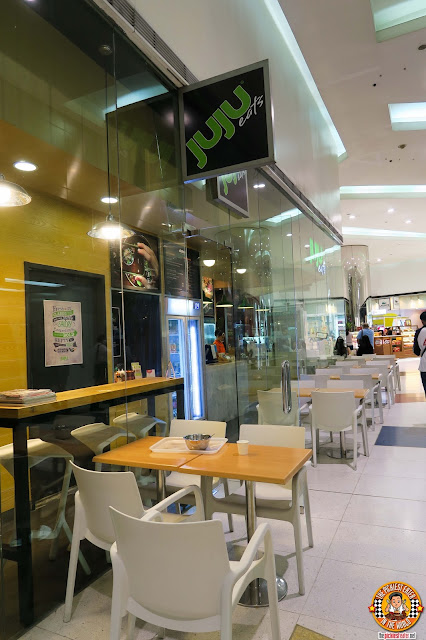 We went to the Branch at Podium, which a few steps away from the entrance. I'll be honest, I was half expecting to make a trip to Wildflour which was a few steps across from Juju Eats, but I was in for a surprise, because I ended up eating a whole lot more than I thought I would. 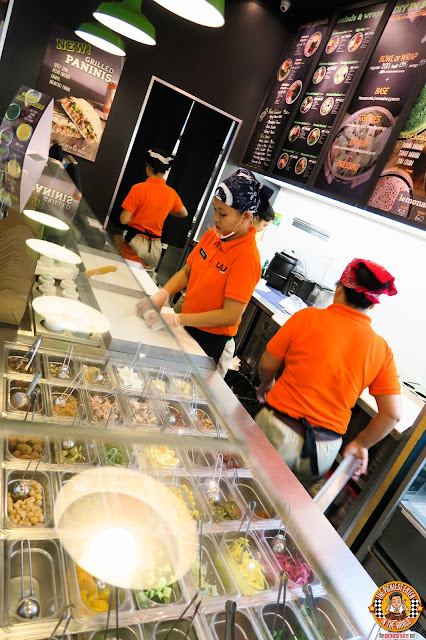 But see, that's the whole misconception with Juju Eats. Yes, the food is nutritious and has healthy benefits but not at the sacrifice of taste. The owners made sure that what your eating is good for your body, and satisfying to your palate as well.

The Salad is of course, at the forefront of Juju Eat's crusade. If you're not settled in on the extensive choices that Juju Offers, you may opt to customize it yourself 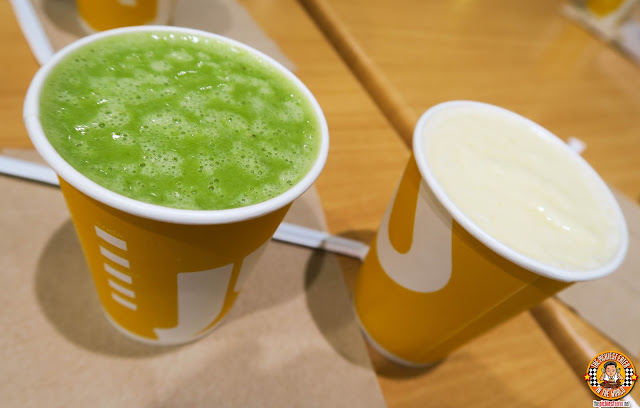 I started off with their smoothies. I have a connfession. I was offered the green one at first, but I politely declined, hoping to hold out for something that would be more "me", Thankfully, that Godsent refreshment arrived moments later in the form of the Choco Banana Smoothie. And it was actually really good. It tasted like a good old fashioned shake, but more with a natural sweetness.

The Green one was part of their "Daily Green" option, and there are other beverage options as well, such as freshly pressed juices and even cocktails! 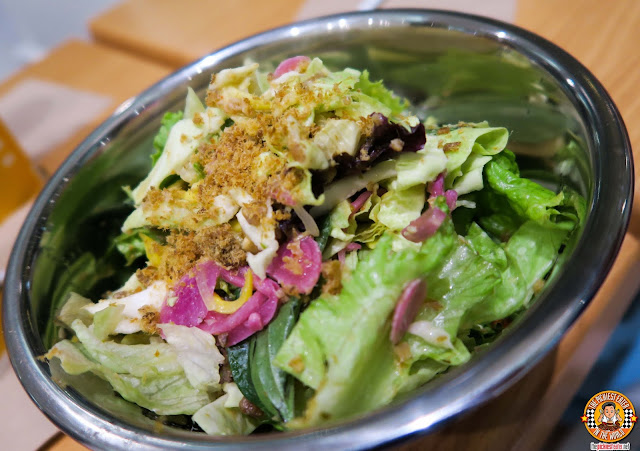 Our meal started with Juju Eat's take on the popular Thai dish, Crispy Catfish Salad. The flavors were vibrant and robust, without going overboard. I liked the crunchiness of the shredded catfish, which in fact, left me looking for more, believe it or not! 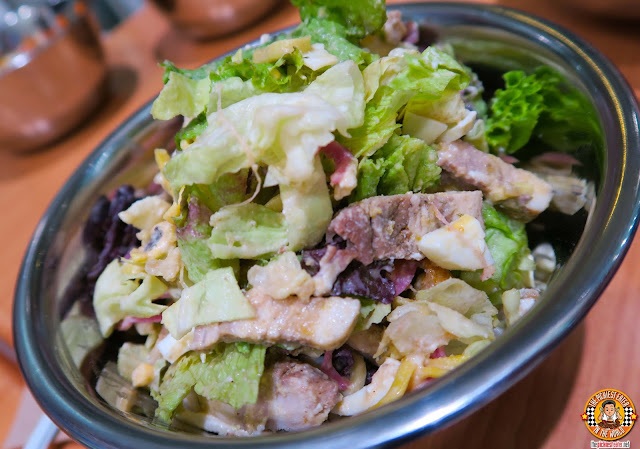 The Inasal Salad left me confused. This was the first time a salad has ever left me wanting for more Rice. Bathed in the comforting inasal flavors that we know and love, tender slices of grilled pork is tossed into a salad, letting the acid of the mangoes and Balayan dressing play off the smokiness of the pork.

This was something you must try, and a nice middle ground for hard core carnivores such as myself. 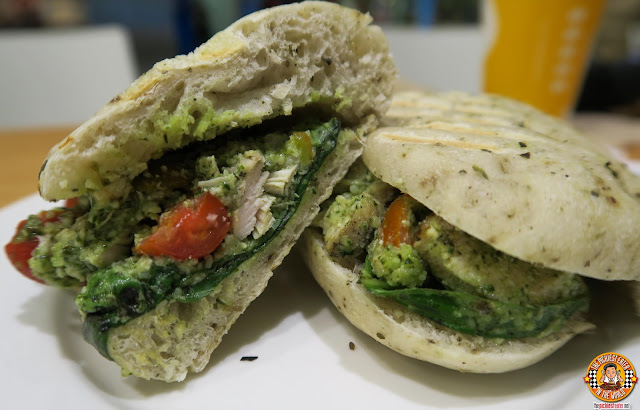 Something you all will be happy to know, is that Juju Eats makes excellent Pesto. So if you order any of their Pesto based dishes, you're in good hands. (Sorta like the Metrobank of Pesto Makers)
The Pesto Chicken Panini is delicious, and since they use Breast Meat, you can indulge on this with less guilt, without feeling deprived. 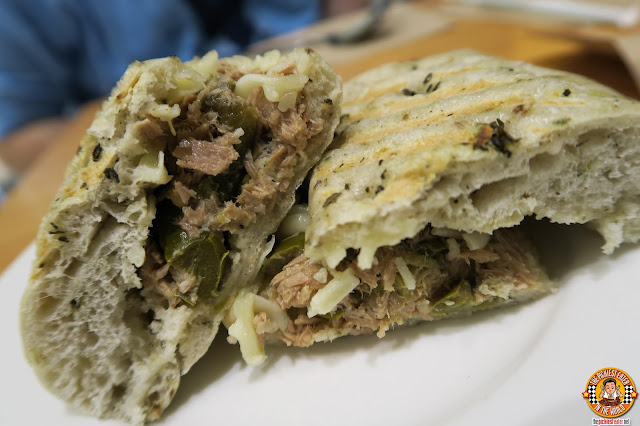 Same goes for the Spicy Tuna Panini! The Chunks of tuna quite flavorful, and t is peppered with Jalapeno slices, giving the sandwich a delicious spicy kick. 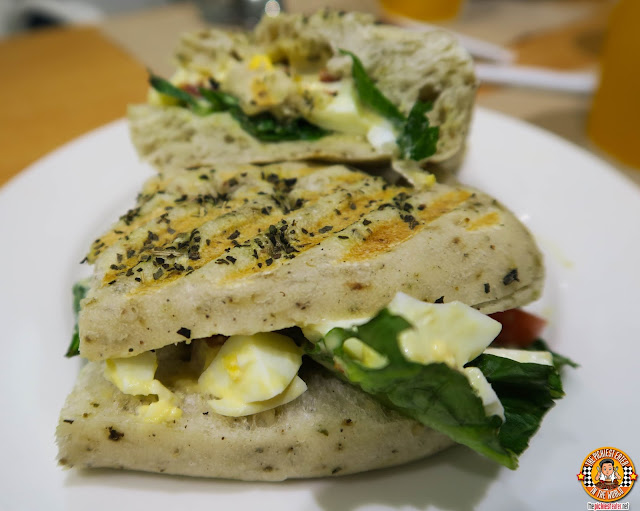 My favorite among the sandwiches though, was easily the Breakfast Panini! It was a simple, yet comforting egg salad sandwich, with bits of bacon speckled within it. You heard me right.. Bacon.

Ah, but what kind of Bacon, you ask?

In the immortal words of the singer of Hanson who broke my friend John Templo's heart when he found he was actually a dude... "It's a secret no one knoooooooooowsssss uh-oh..." 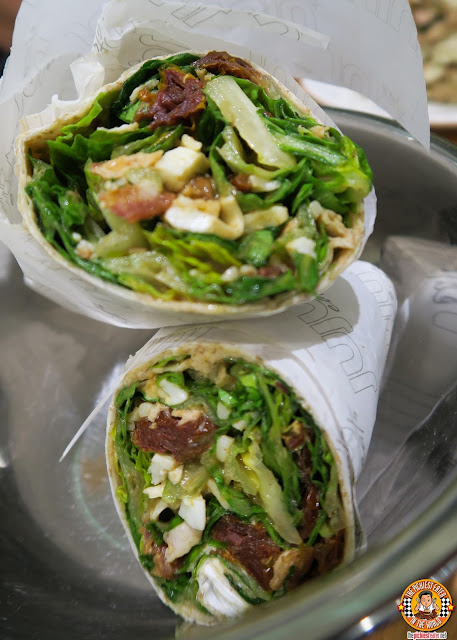 All Mmm-Bopping aside,  If you're not convinced about having a salad, you may opt to convert that salad into a Healthy Wrap. The Popular Big Boy salad, a medley of Bacon, Chicken, Red Kidney Beans, and much more can be turned into an easy meal on the go. 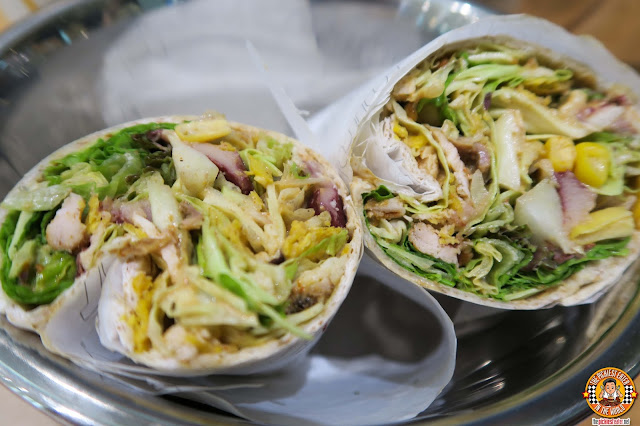 As with the "Ay Caramba!", which features a distinct Mexican flair, including a touch of heat brought in by the Jalapenos, and house made "Ay Caramba Dressing". 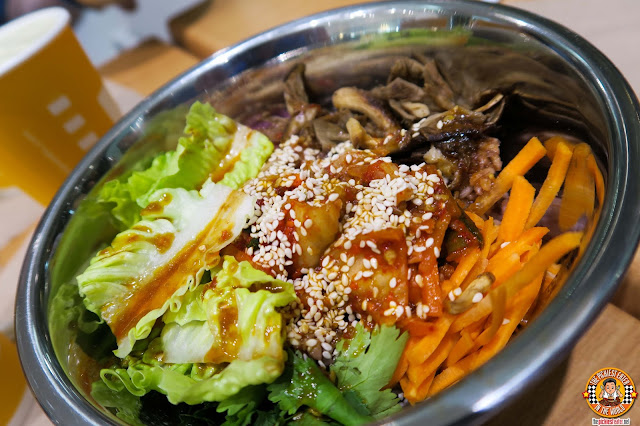 In case you were wondering, Juju Eats also has Rice meals! We tried the Bibimbap Bowl, which is topped with generous amounts of Kimchi and mushrooms. This is quite on the spicy side so make sure your palate is up for it! 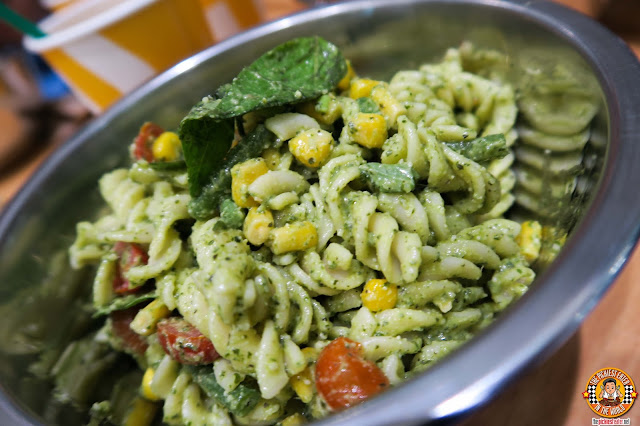 The Dish that I LOVED from Juju Eats.. Something that I would order again without hesitation was the Pesto Pasta Salad. Every inch of the pasta was coated in the fragrant pesto sauce, and the parmesan cheese and the bits of corn helped compliment the flavor. This was something you could order at any restaurant and not realize that it's actually a healthy dish. 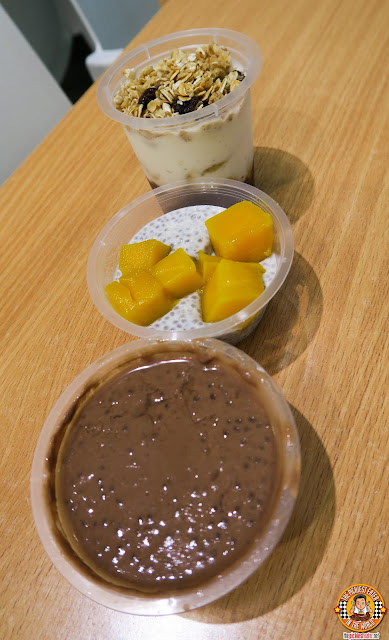 I was pleasantly surprised to discover that Juju also has desserts on their menu! I tried the Choclate Chia Pudding (which was good but on the "darker" side because of it having less sugar), The Mango Chia Pudding (Yummy. the chia reminded me of tapioca), and the Choco Banana Parfait (Very Good, but again, darker).

Juju Eat's isn't simply for healthy eaters.. But for plain and simply for people who want good food.

Posted by The Pickiest Eater at 1:04 PM

Email ThisBlogThis!Share to TwitterShare to FacebookShare to Pinterest
Labels: Healthy Food In Manila, Juju Eats, Podium, Where to eat at Podium