First off, let me apologize again for the quality of the photos. It's not on par with my previous work, and that is because my DSLR has been broken for quite some time now.
Trust me, the food tastes so much better than it looks in these pictures! 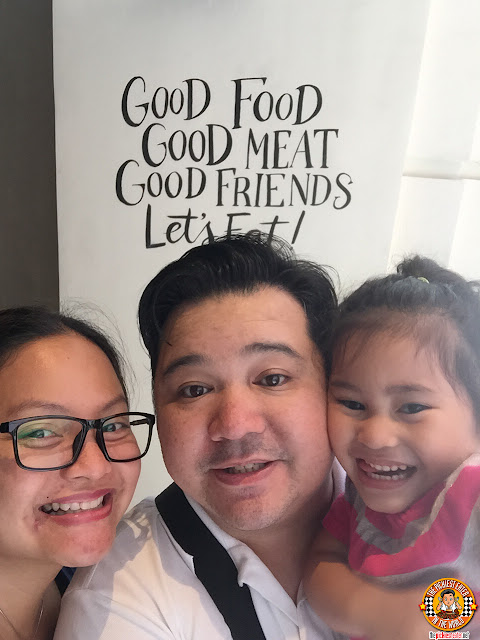 It was genuinely heartbreaking for me when a few months back, I was unable to visit the launch of Cafe Enye- A restaurant that specializes in Spanish Cuisine. What Cafe Enye did was take traditional Spanish favorites, and give it a modern day twist that would be more appealing to the Millennials of this generation.

When I saw the photos that my blogger friends were posting, I knew I should have moved Heaven and Earth to have made it to the launch. Despite missing the opening, I was set on visiting Cafe Enye on my own time, with it's Eastwood location relatively easy for me to get to since it's not too far from where I live. Unfortunately, all my plans were one way or another, always thwarted by life.

Thankfully, I received another invite from Cafe Enye, and this time I said I was definitely going to make time for it.. And I'm so glad I did because they revealed their Brunch Menu, that is absolutely amazing! 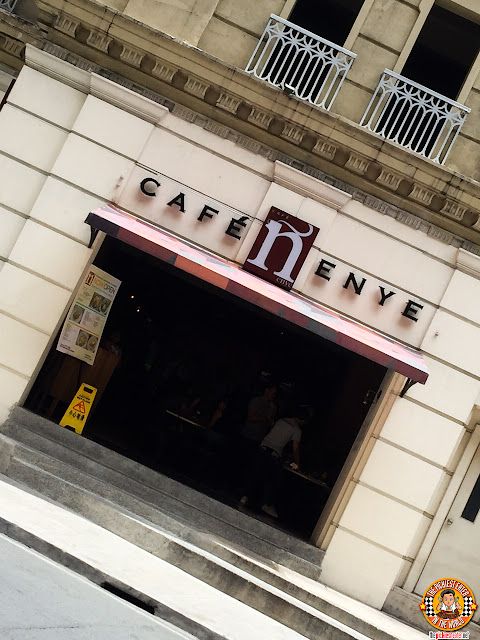 If you've been looking for Cafe Enye inside one of the malls, then you've been searching for love in all the wrong places. Cafe Enye is actually located at the Ground floor of Excelsior building, located within Eastwood City. Easy to overlook, but once you spot it, you'll never forget it. 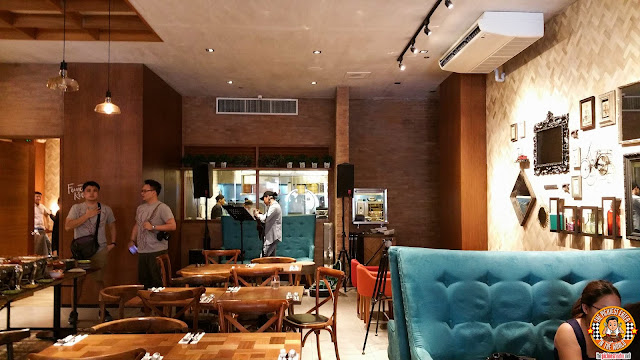 The interiors of the restaurant has a Spanish home type of feel, with wooden accents and Spanish era decors adorning the walls. There are comfy couch seating available, and you can be rest assured that when I arrived, I made a beeline for that table! 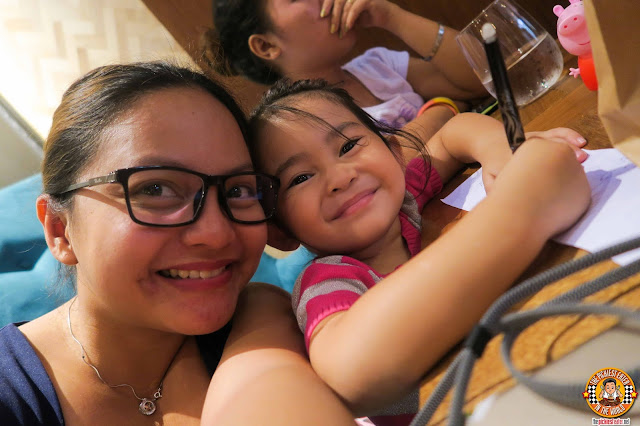 Though she just finished her night shift job, Rina still couldn't resist staying awake a few hours longer for brunch at Cafe Enye! And Rain (who loves eggs), was more than happy to tag along with us!

Before we attacked the Brunch Entrees, we were first entreated to a whole slew of appetizers to try! 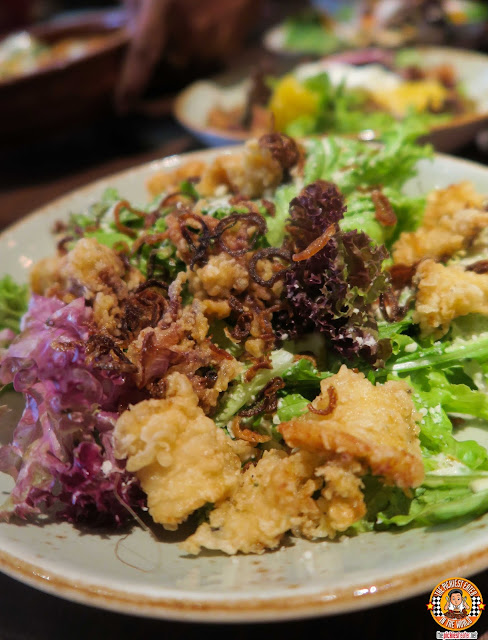 Rina began the meal by pouncing on the Calamares Salad (P250). It's no secret that I'm not too big on Seafood, but Calamares is one of the few exceptions to that notion. The Calamares was seasoned well and Rina loved how it went together with the Green Onion dressing. 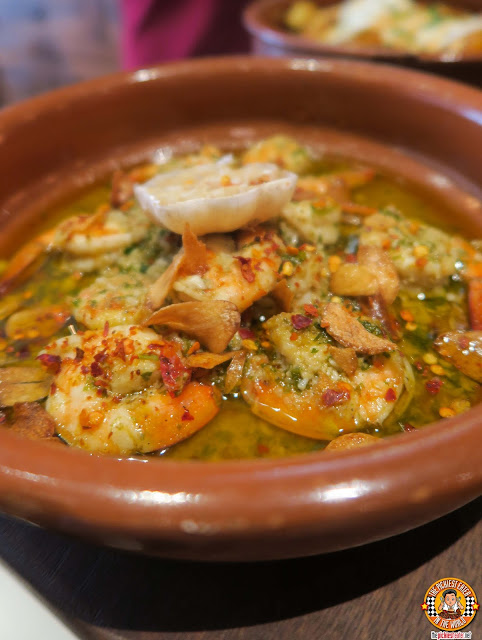 Rina went bonkers over the Gambas Enye Style (P350). I had to explain to her that this was meant to be an appetizer, but she wouldn't have it, as she continued to pour heaps of the tasty olive oil sauce over her pile of steaming white rice, to pair perfectly with the plump shrimps sauteed in garlic. 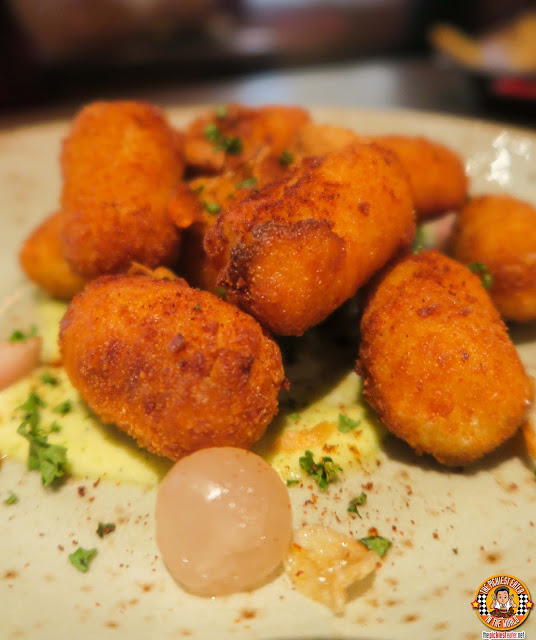 If there was a Pollo Croquettas (P175) eating contest that day, I would have every beat by at least a dozen. The creamy mixture of chicken and potato melded harmoniously in my mouth, with the crisp exterior giving way to the smooth texture of the filling. If you're telling me that you can eat just one, then you my friend are a stronger man than I. I didn't even need the Salsa Verde it came with.. I ate it alone just fine. 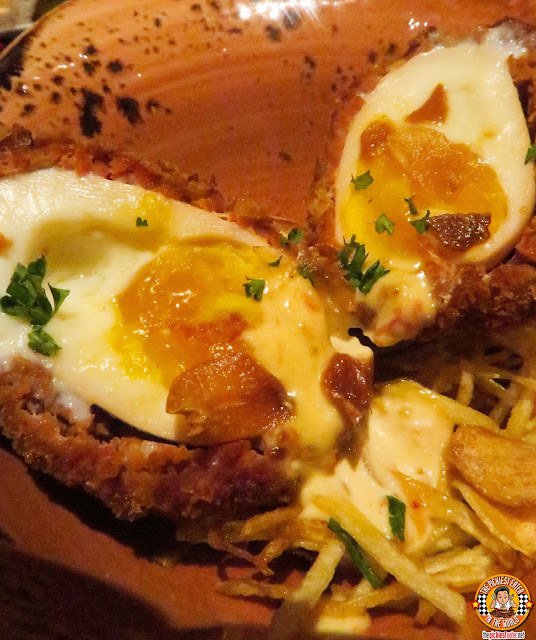 If there's yet another thing Rina is loco over, it's eggs, so she tore into the Chorizo Scotch Eggs (P175) like there was no tomorrow. Splitting the egg in half revealed a gorgeous center that had the right consistency that I look for in a Scotch Egg. It had a nice moistness to it, without going too runny or too dry either. The robust flavor of the Chorizo was tempered by the creaminess of the egg, creating a wonderful balance of flavors between them. The Sofrito Aioli added a newer depth of flavor to an already delectable dish. 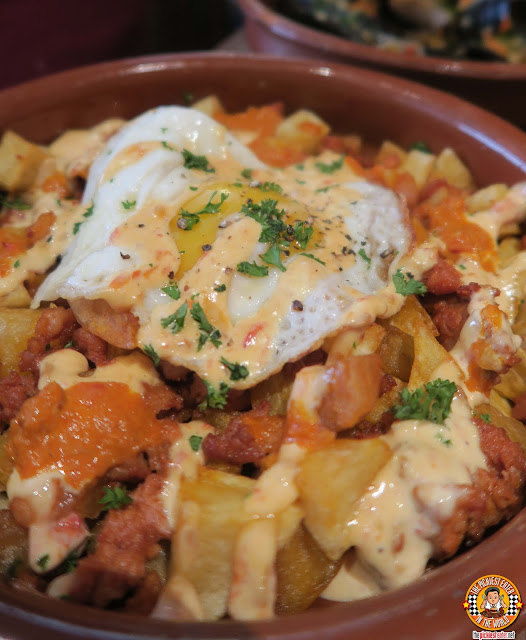 I'm a huge fan of potatoes, so I always look forward to dishes with good old fashion spuds in it. The Patatas Bravas (P270) was really quite excellent. It had bold flavors, coming from different components of the dish, yet the perfectly cooked potatoes were the undoubted star of the dish. The roasted potatoes are topped with a fried Egg, Sofrito Aioli and Harissa for a hint of heat.

Now it was time to get to business, We were here for the Brunch Menu, and the moment I took a whiff of the entrees, I knew this was going to be all sorts of awesome. 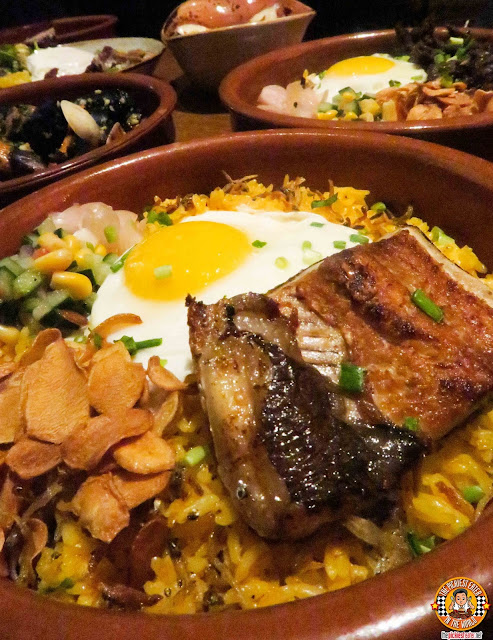 Fish is the only seafood that I have no problems eating. And it's because of dishes like Homemade Daing na Bangus (P215) that has made that so. First off, that cut of Bangus belly was phenomenal. Sorry, but I'm a fan of the fat of the Bangus, and the chunk of fat on this bad boy was glorious. The fish had the right amount of acid, which was countered by the Perfectly cooked Sunny Side up egg, while the Enye Rice gives a bit of a Paella like flair to it. 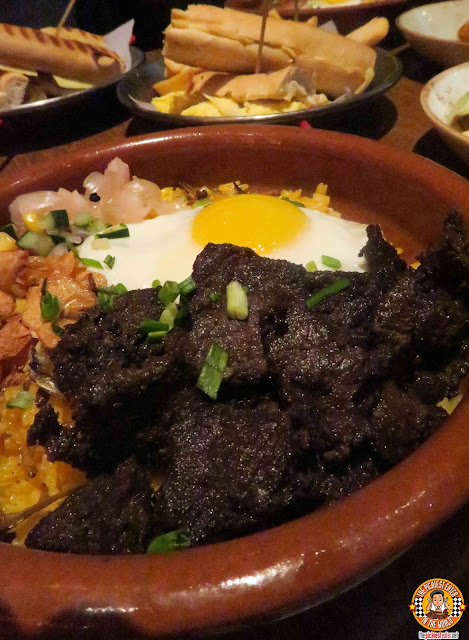 The  House-Cured Beef Tapa (P215) was also nothing short of spectacular. The delicious cuts of flavorful beef just kept hitting the right notes with my taste buds, making me spear one piece after another with my fork. 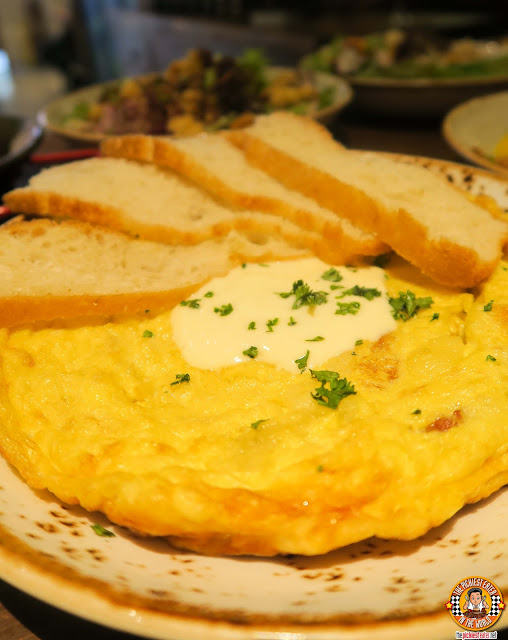 If you're looking for light, yet filling start to your day, then the Ham and Cheese Tortillas is the way to go. Three Eggs are scrambled and filled with diced potatoes, cheese and ham, creating an amazing way to start your day. That Honey Yogurt center though will remind you of everything good in this world. 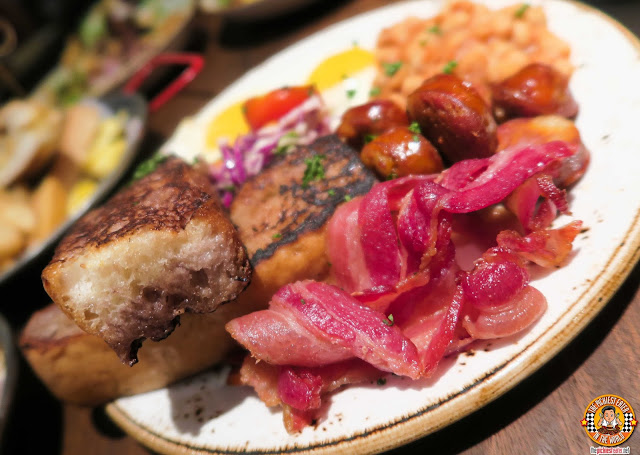 Breakfast food lovers such as myself will want to order the most bad ass item on the menu, which is Spanish Brunch Plate (P280). Just a glimpse at the magnificent strips of bacon on the plate was enough to bring tears to my eyes. But when paired with Spanish Chorizo, Baked beans and Spanish Style toast.. I was a goner. Heaven on a breakfast plate right there. 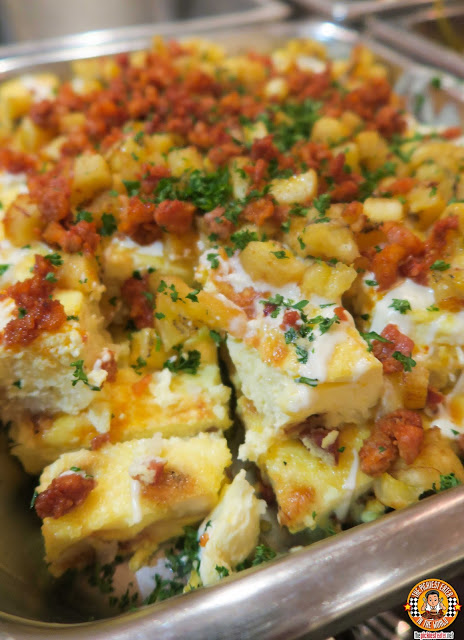 My favorite dish of the day, was the Plantain and Chorizo Tortillas (P250). In fact, I can safely say that was one of the best breakfast items I've ever had anywhere. The adding of plantain and crumbled chorizo to the tortilla was pure genius. It was the ultimate harmony of sweet meeting savory, with one never overpowering the other.

It was so damn good, I thought I felt like the fat guy from the movie "7", that ate himself to death. I just couldn't stop. 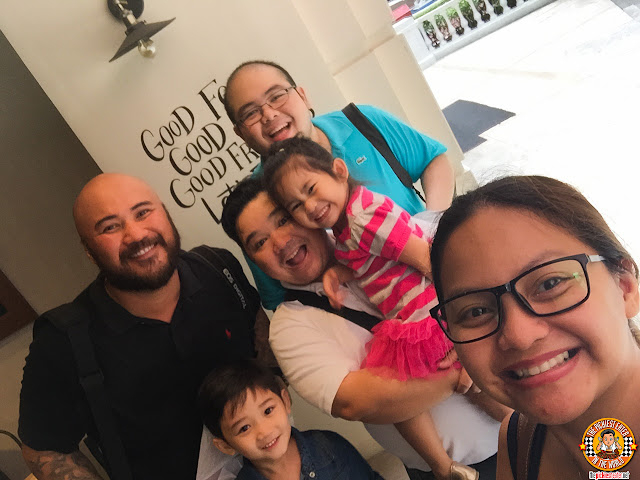 Great Food, Great Meat, with Great Friends. Cafe Enye's Brunch menu is the ideal way to start your day! I thoroughly enjoyed my Brunch experience at Cafe Enye, and I'm looking forward to coming back to try the other items on the Mains menu!

Though the Classic Spanish influence is evident in the menu items, it is clear that Cafe Enye's brand of food is not constrained by one cuisine, but instead, dares to expand its horizons of flavor, giving its guests a timeless dining experience to remember!

Email ThisBlogThis!Share to TwitterShare to FacebookShare to Pinterest
Labels: Cafe Enye, Eastwood, Restaurants in Eastwood, Where to Eat at Eastwood