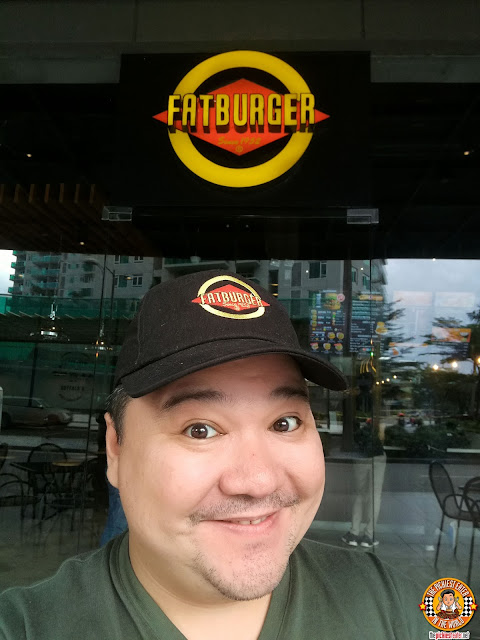 The year was 1997, and the place was Las Vegas. My brother and I chipped in part of our vacation money to take our dad out on a limo ride around the City of Lights for his birthday. My Godmother was a travel agent so we got a great deal on our limo ride, but since we had splurged on the wheels, it meant dinner would have to be sacrificed.

Our Limo Driver picked us up at the MGM Grand promptly at 6:45pm, and I noticed my dad, despite being in an incredibly luxurious limo, seemed a tad crabby. My dad is notorious for getting grumpy when his tummy grumbles so it clicked to my brother that if he was going to fully enjoy this limo ride, he would need to get some food in his stomach.

I told my Ninang about the situation, so she casually asked the Limo driver where was a quick but delicious place to grab something to eat before we went on our tour around Las Vegas (we weren't allowed to eat inside the car). The driver suggested his favorite burger spot which was conveniently located three minutes away, just along the Las Vegas Strip. And he even told my aunt that since he hadn't had dinner yet, if we bought him a burger, he'd only start the time AFTER we all had eaten.. A concession he was willing to make ONLY for a restaurant called, Fatburger.

That told me that this must be one awesome burger. After one bite of a Double Fatburger with Bacon and Egg, I just had to give that Limo Driver a high five.

19 years later, Fatburger, has become one of the emerging burger chains in the global scene, and has now finally opened a branch in Manila!

A few international chains have opened in the country, and if you've tried it in the U.S., then visit their Pinoy incarnation, the first thing you'd notice is the difference in prices. "Diner Prices" in the U.S. often translates to "Upscale Dining Prices" in the Philippines, but that's the price you need to pay for the quality you get in return. 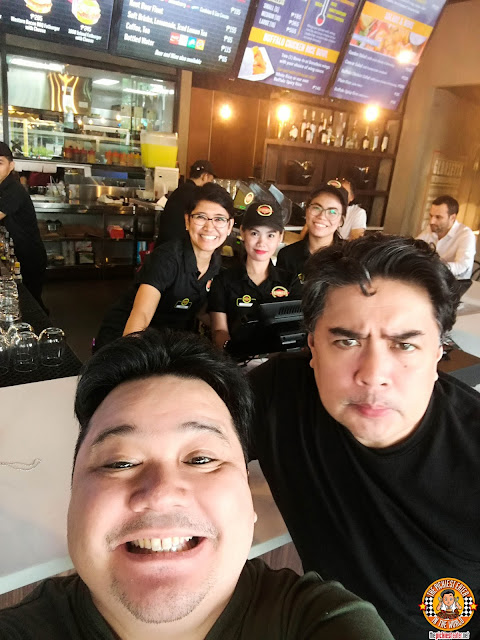 I am proud to tell you that I feel that Fatburger's prices are reasonable, with their Triple Fatburger being their most expensive burger at (P395), and the add ons only ranging from the P30-P50 peso range.

A "pre-set" Fatburger consists of a US Chuck Sirloin Beef patty, and basic fix ins, such as Lettuce, Tomato, Pickles, Onions, Relish and Mustard. You may request for some of those removed, and then you may add other items, such as Cheese, Bacon, Fried Egg, Onion Rings, Chili, Mushrooms, and Grilled Onions.

You may opt to switch your White buns to Brioche, Gluten Free, Lettuce Wrap, or even an English Muffin!

All of Fatburgers food is made to order, so by no means is this a Fast food Restaurant. The feel has a touches of Nostalgia meets modern, with the wall showing images of Old Hollywood, and a tribute to Fatburger's founder, Lovie Yancey, while the other section has a industrial contemporary feel. 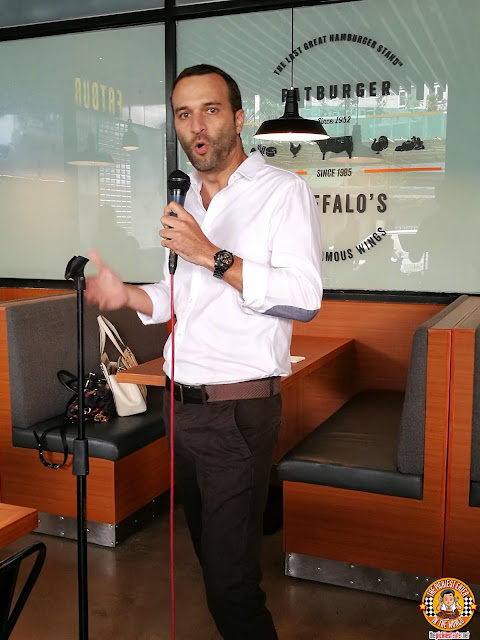 Before we got our Fatburger on, we were welcomed by COO of Fatburger Philippines, Mr. Jack Halaby, who gave us insight on what Fatburger stands for. The quality of Fatburger's food is something that they take pride in, and something they have worked strenuously to ensure it is maintained in the Philippine Branch. 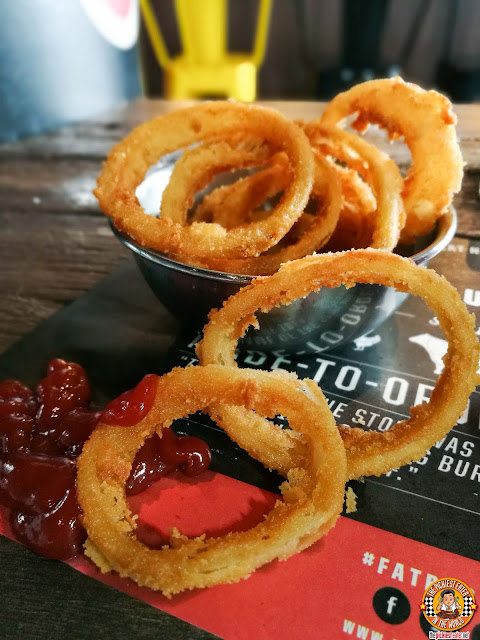 The Chili Fries are good, and the Skinny fries are awesome (I don't have a decent shot of either sorry), but it's the Homemade Onion Rings (P95) that are what you MUST try. The delicate coating is seasoned perfectly, complimenting the innate sweetness of the onion.

Trivia: In the few weeks Fatburger has been opened in the Philippines, the American training crew was amazed how the onion rings outsell the Fries!

The Fatburger store in Glorietta is actually a Dual concept store, as it also serves up the menu of the famous wings restaurant, "Buffalo's", which includes 15 sauces for Wings, ranging from three different levels of heat, and a choice between Bone-In and Boneless (YES!) Wings. 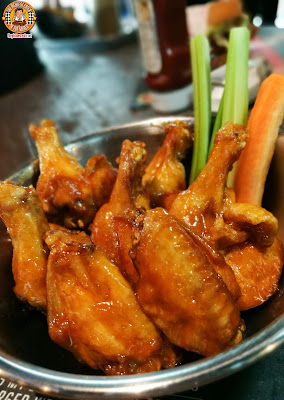 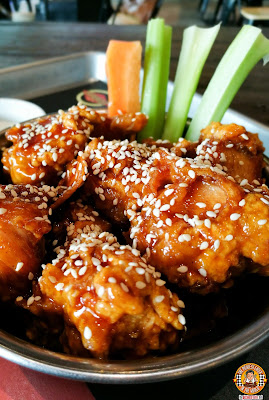 Honey Garlic wings had a zing of sweetness, while the Asian Sesame offered a complex punch of delicious flavors to go with it touch of heat. 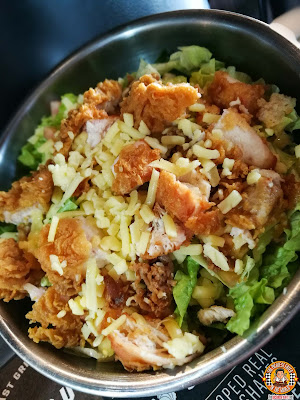 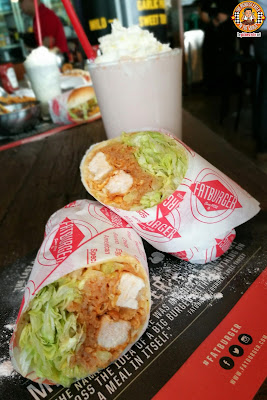 If you're not looking for something as heavy as a burger, you can order the Buffalo Chicken Salad (P295), or one of their three Chicken Wraps such as the Kick'N Chicken Wrap (P195). 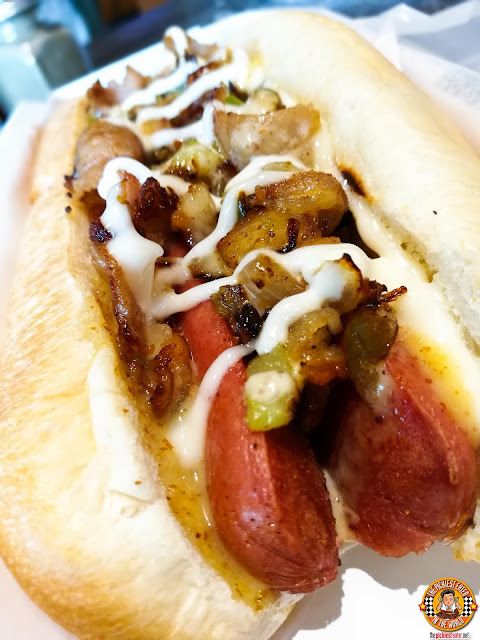 I'm pretty sure Rina and I won't be able to resist the lineup of Fatburgers Hot Dogs, the next time we visit. I'm going to go for the Los Angeles Street Dog (P245), which is made a plump Frankfurter topped with Bacon, Grilled Onions, Bell Peppers, Mayonnaise and a touch of Sweet Spicy Mustard. 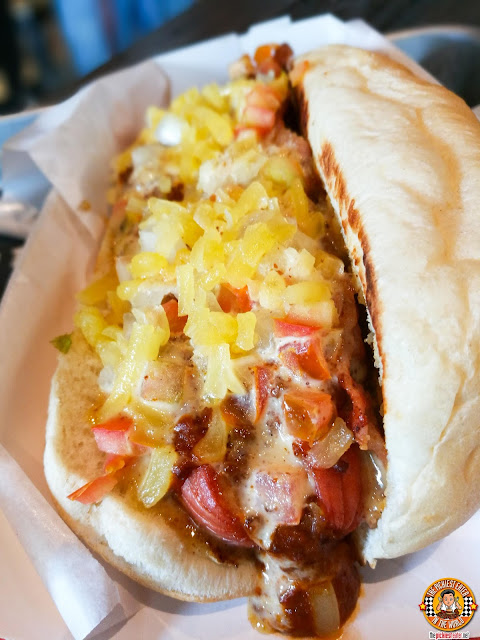 I'll probably go crazy on the Wings and hotdogs the next time I visit Fatburger, but for my first visit, I was dead set on having some of their burgers. 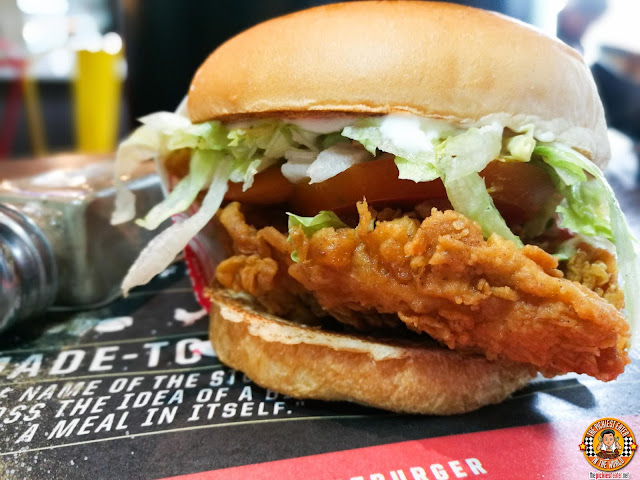 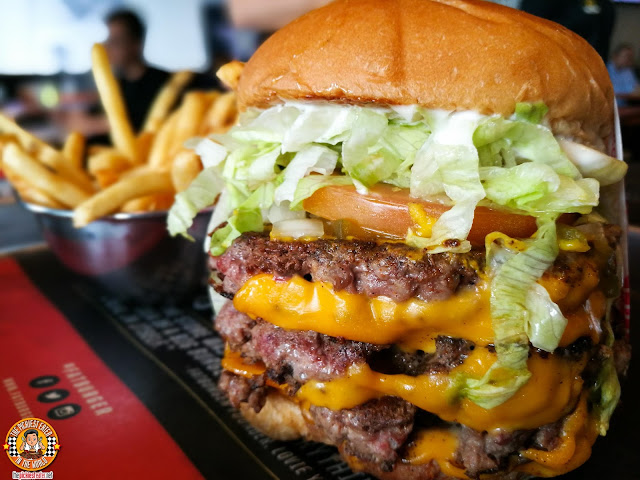 Perhaps the crown jewel on the menu of Fatburger, is the Triple Fatburger (P395), a triple beef patty behemoth, weighing 3/4th of a pound. 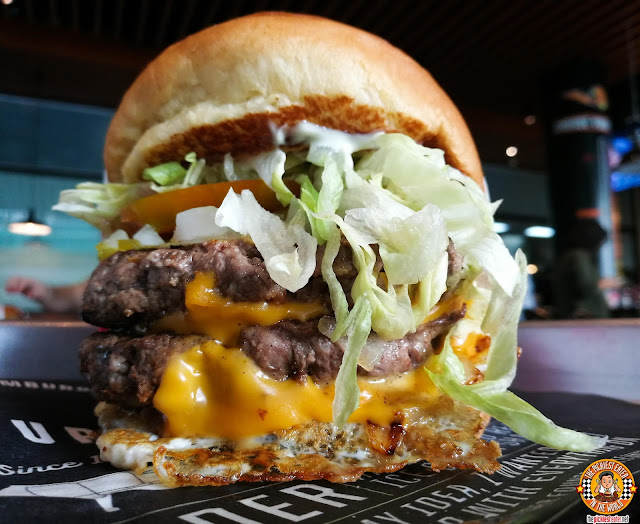 I went for the Double Fatburger 1/2 lb (P295),which I customized with Bacon and Egg as my Add On. The Beef patty was seasoned masterfully, with natural juices running down all over it, turning it into a glorious mess to eat. 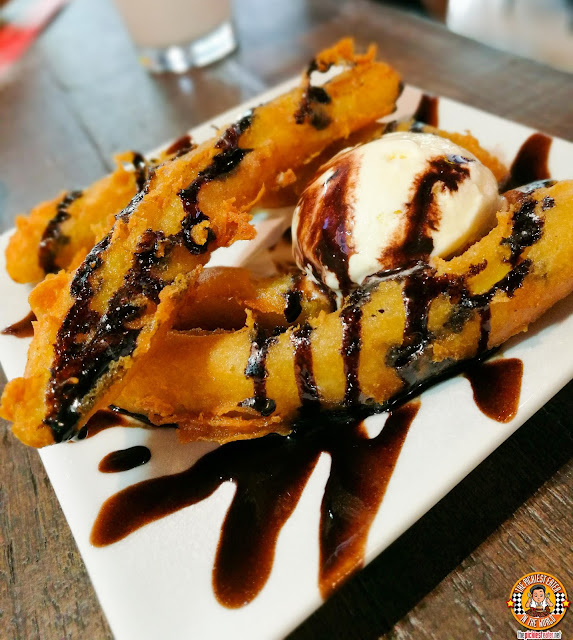 I decided to go with the Banana Fritters (P135) for dessert, and I found it a nice way to end a heavy meal. Think of it as Fatburger's version of our local "Maruya", with the thin strips of banana in a lightly covered crisp batter, that tastes even more heavenly with a scoop of Vanilla Ice Cream. 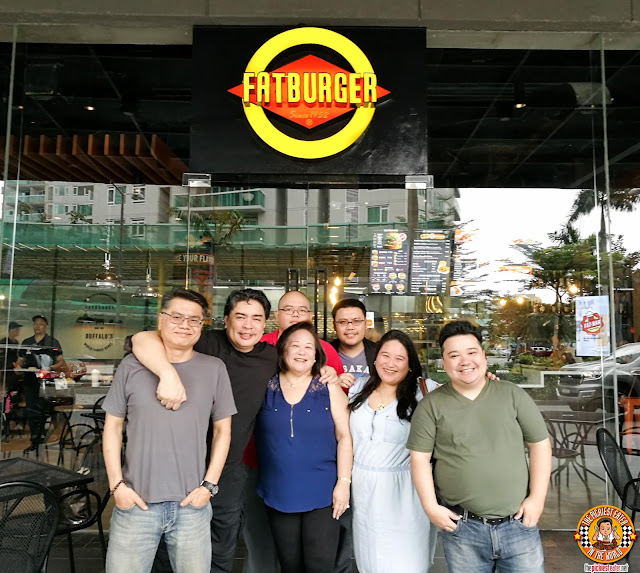 I'm excited to go back to Fatburger with Rina and my friends from KTG to try some of their other items, especially more of the 15 different flavors of Wings, and their mouthwatering Hot Dogs! 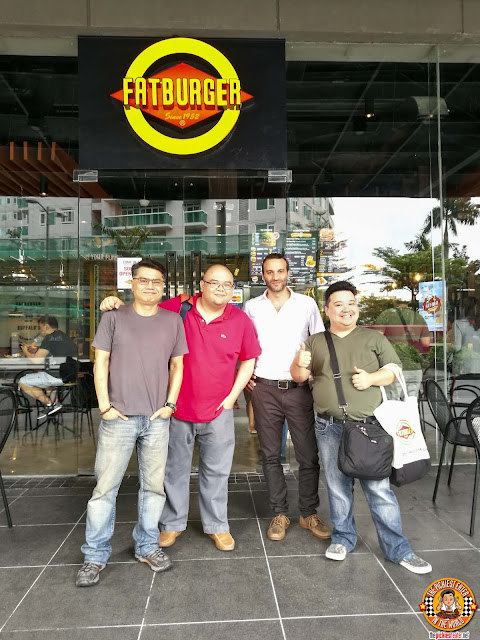 Congratulations to Mr. Jack Halaby and the entire Fatburger Philippines team for a very successful opening of Fatburger here in the Philippines! With it's amazing burgers and reasonable prices, I'm really looking forward to more branches of Fatburger around the country in the future! 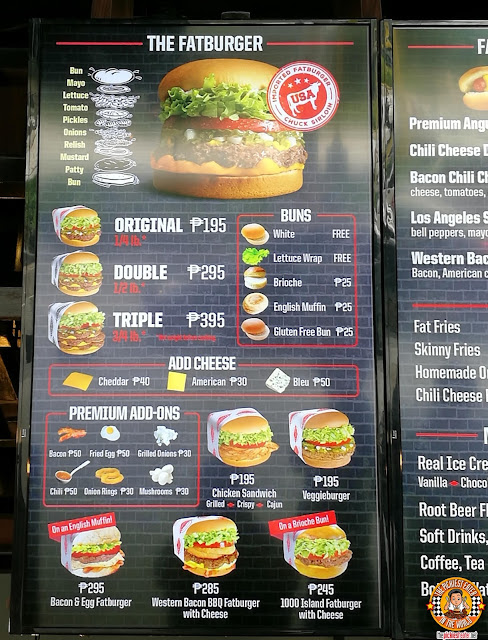 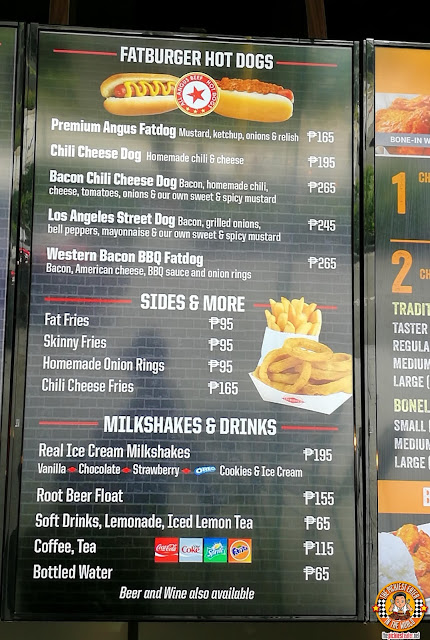 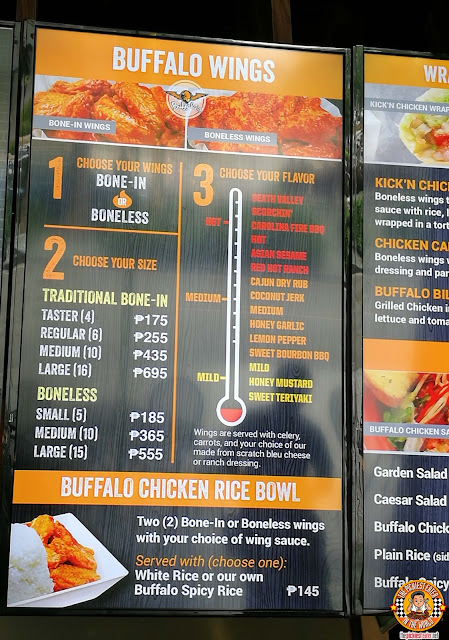 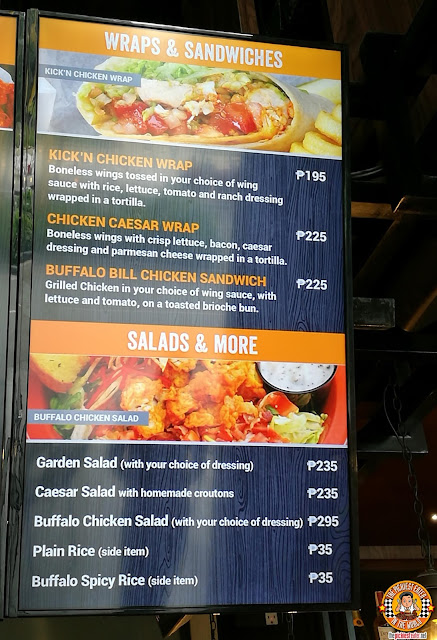 Posted by The Pickiest Eater at 12:45 AM