ALL ABOARD GENKI SUSHI AT AYALA THE 30TH! 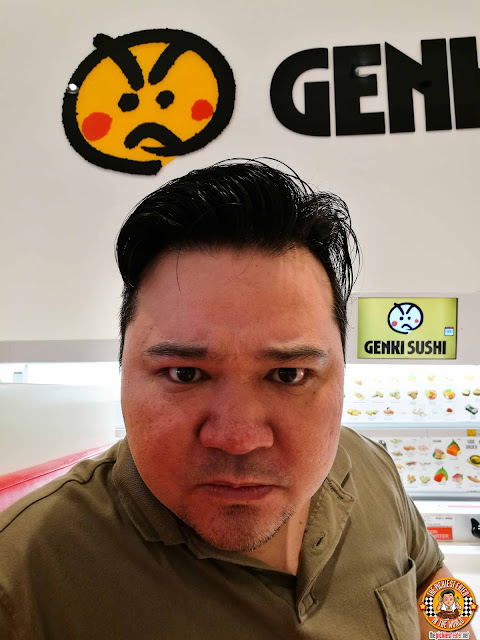 Popular Japanese Restaurant Franchise Genki Sushi opened in the Philippines a couple of years ago, but unfortunately I never got a chance to try it until recently. Given the name, and my aversion to raw food, you can understand why I wasn't really in a rush to go drop by. However, when Genki Sushi opened a branch near me, specifically Ayala the 30th, I managed to pass by it and saw that their ala carte menu looked rather intriguing as well. So one fine Saturday, my foodie friends and I decided to invade Genki Sushi, and see what the buzz was all about. 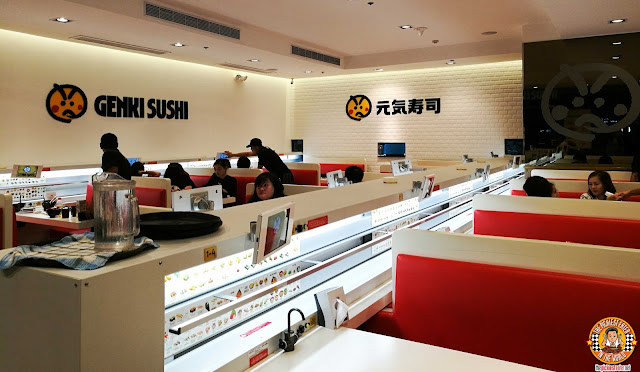 Genki Sushi is known for their wide selection of high quality Sushi and Sashimi dishes, as well as other Japanese items. Established in Japan in 1990, the chain expanded to a global audience, including locations in Hong Kong, Indonesia, Singapore, Kuwait, China, and the United States. 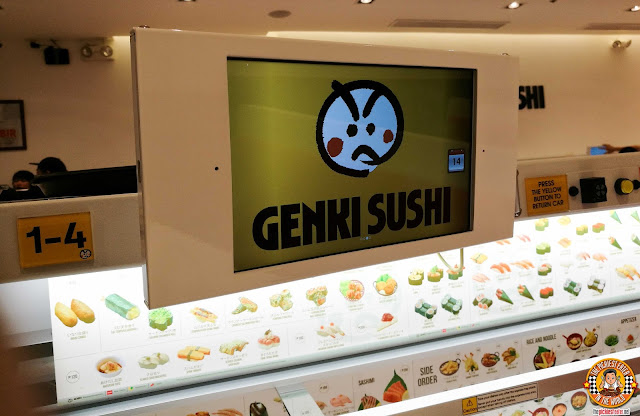 Once your attendant seats you, you may place your orders via the tablet stationed on every table. This way you can see the running total of your bill. But do take note: Be careful when using the tablet, because all orders are final. 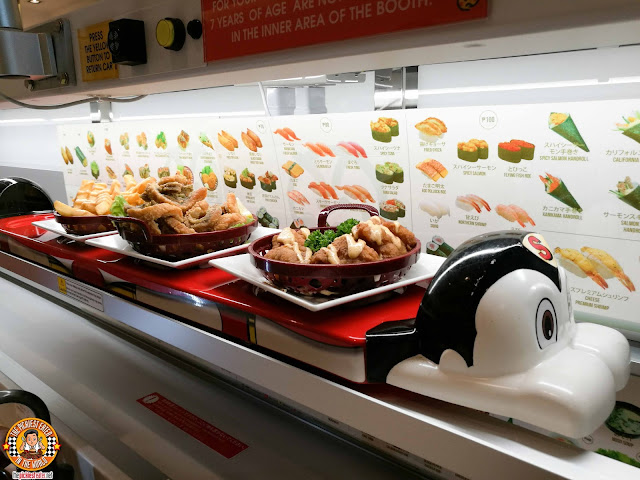 Their food is undoubtedly top notch, but what put Genki Sushi on the map, is their type of service that uses conveyor trains instead of the traditional waiter bringing your food to your table.

Once you've placed your order, your food is prepared in the kitchen. When your orders are ready, they are placed on a train, and sent directly to your table. Once the trains arrive, you simply take the dishes from the train, and send it train back with the press of a button!

Though Genki Sushi is incredibly popular with children, Kids aged 7 and below are not advised to stay in the inner seats, as a precautionary measure. 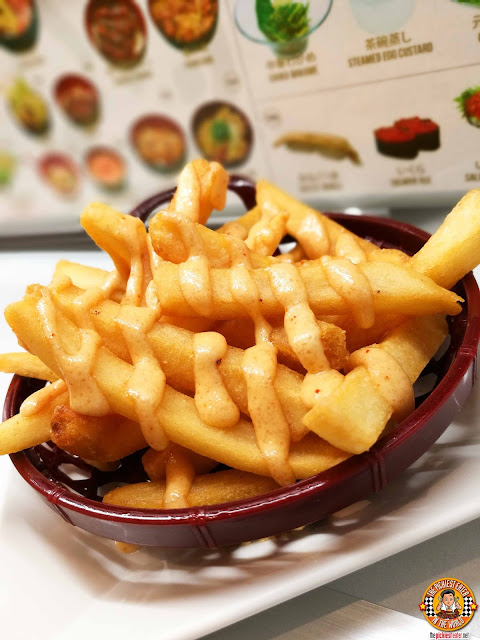 For starters, we had the French Fries with Pollock Roe (P120). Normally, I'm not a big fan of Mentaiko (Japanese for Pollock Roe), but in this case, it was a delicious compliment to the beautifully deep fried potato wedges. A very simple but tasty East Meets West appetizer. 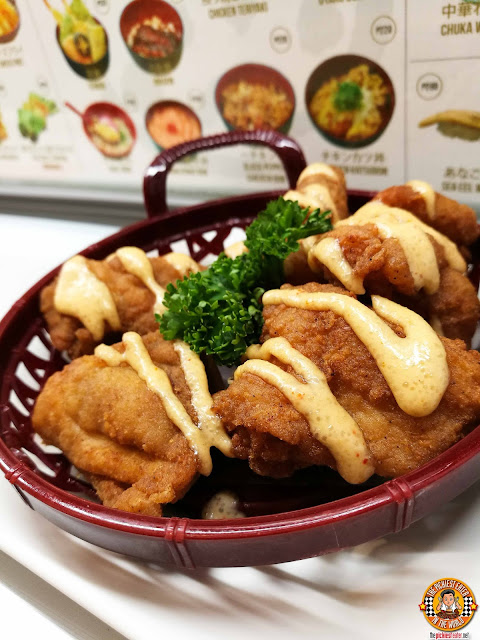 Something that I could not get enough of, was the Fried Chicken with Pollock Roe (P180). The cuts of lightly breaded, boneless chicken, were amazingly juicy, and once again, that luscious drizzling of Mentaiko give the chicken a whole new elevation of flavor. 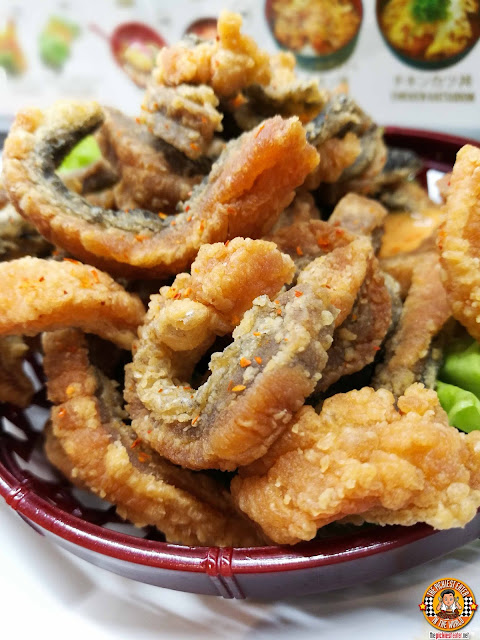 I was told that fried fish skin is a healthier alternative to fried chicken skin, one of my addictions.  Which is good because I think I may have eaten my body weight in Genki Sushi's Fried Salmon Skin (P100). Lightly breaded and deep fried to golden perfection, I found myself craving for this once I got home. 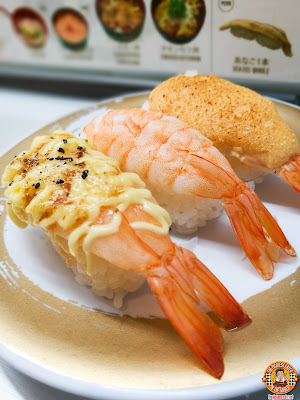 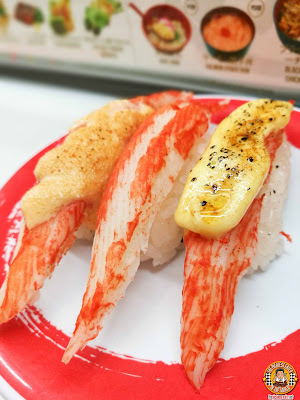 You guys are probably going to break stuff over my head when I tell you this, but I went to Genki Sushi and didn't try any of the offerings in their Shrimp Trio, or the Kanikama Trio.

I can't give you any insight on how it tasted, but what I can tell you is that my other blogger friends wiped it out immediately. 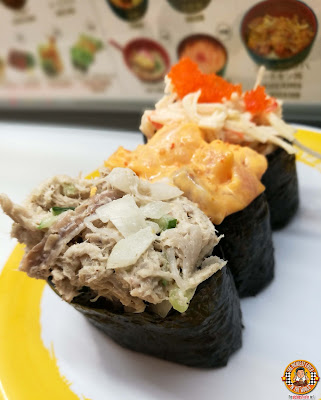 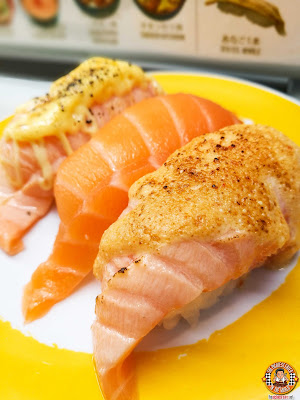 I was a little more amenable to trying something from the Salmon Trio instead. The Salmon Trio consisted of Salmon, Salmon Pollock Roe, and Salmon Black Pepper sushis, and I believe I had the Black Pepper Salmon. Since I'm a fan of smoked Salmon, this was a welcome compromise for me to try and I was not disappointed with the fresh flavor of the fish, prepared over moist, sticky rice.

Much to the delight of my blogger companions, I was not adventurous enough to try the Gunkan Trio, which they happily devoured with no remorse. The Gunkan Trio included Crab Salad, Spicy Salmon, and Tuna Salad. 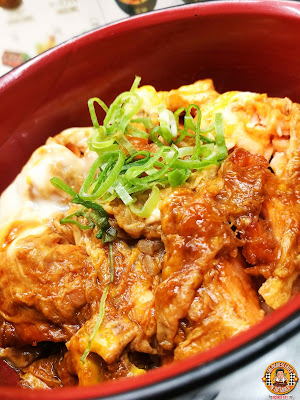 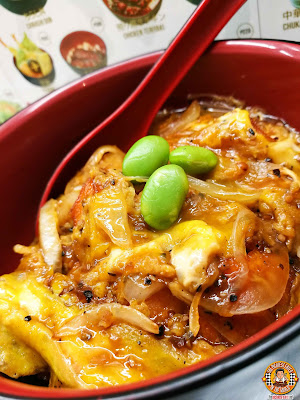 We tried two of Genki Sushi's latest Donburi bowls, namely the Salmon Teriyaki Donburi, and the Salmon Black Pepper Donburi (Both P380). The Teriyaki offers a wonderful medley of sweet meets soy, without going overboard on either end. The Salmon as your main protein works so well, that it took me a few bites before I remembered I was eating fish.

The Black Pepper sauce that the Donburi is doused in brings out the delectable savoriness of the Salmon, making it a viable option when looking for a filling fish dish. 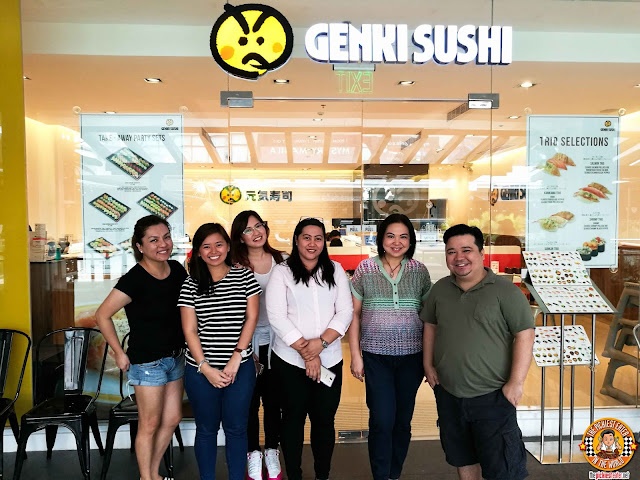 I enjoyed everything I tried at Genki Sushi, to the point that I had to bring Rina and Rain back the following weekend! Apart from the Ayala the 30th branch, Genki Sushi now has three other locations in Metro Manila, including the original branch at Bonifacio Stopover, SM Aura, and UP Town Center. Another branch is set to open at SM North Edsa very soon!

Email ThisBlogThis!Share to TwitterShare to FacebookShare to Pinterest
Labels: Ayala Malls At The 30th, Genki Sushi, Japanese Food, Sushi, Where to Eat At Ayala Malls The 30th