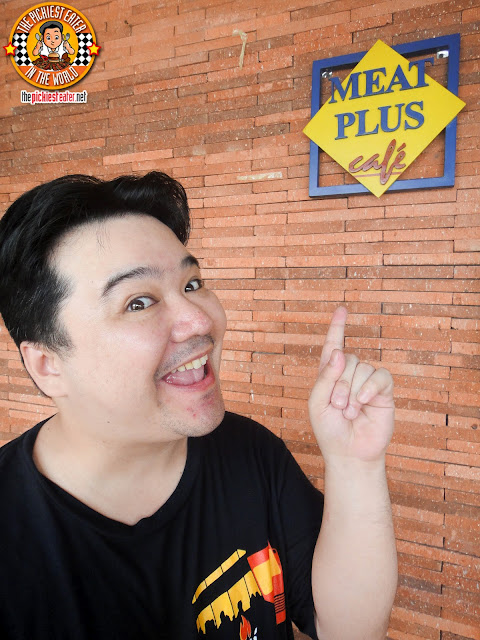 Last May, my company scheduled an employees summer outing at Subic. Ever since baby Rain has come into my life, I have made it a point to spend every waking moment of my weekend with her, since I leave early in the morning and arrive later in the night. Which is why my initial thoughts when I realized I'd be away from my wife and daughter for a day, was to NOT attend the annual excursion.


I sat down with my supervisor, and was just about to tell her that I wasn't planning on joining them in Subic. Whenever we have an event for the office, I'm usually asked to help out with the planning of the program and such, so before I could start on about not wanting to go, my supervisor stopped to show me the itinerary. We go point by point on the schedule, and then I come across our final destination, which simply said "Lunch before heading back to Manila". I asked where they had planned to have their final meat at Subic, and she said, "Meat Plus". She then realized I hadn't gotten to what I wanted to tell her, so she said, "Sorry, you were going to tell me something?". 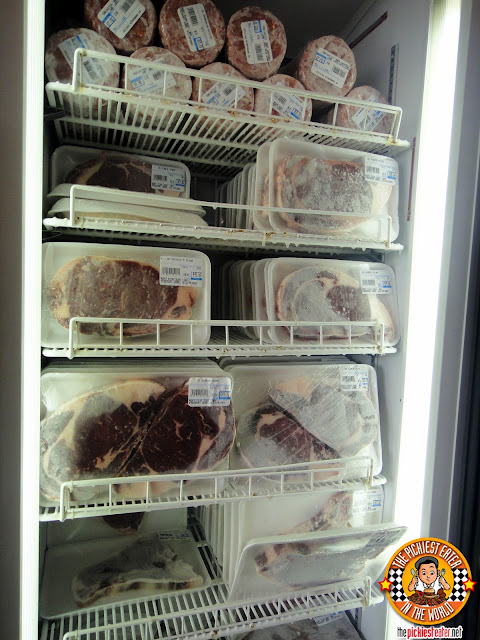 Despite the fact that its the mother company of Tender Bob's which has several branches around Metro Manila, the meat Mecca known as "Meat Plus" is a MUST VISIT restaurant for me whenever I'm at Subic.  If you've been to my blog more than once, than you'll know that I am a full fledged carnivore. So a restaurant with the name "Meat Plus", would be like the Mother Ship calling me home.

Apart from their meat heavy menu, you can opt to select your steak from their freezer (prices vary, based on the size), and for an additional P150, you can have it cooked just the way you like it. 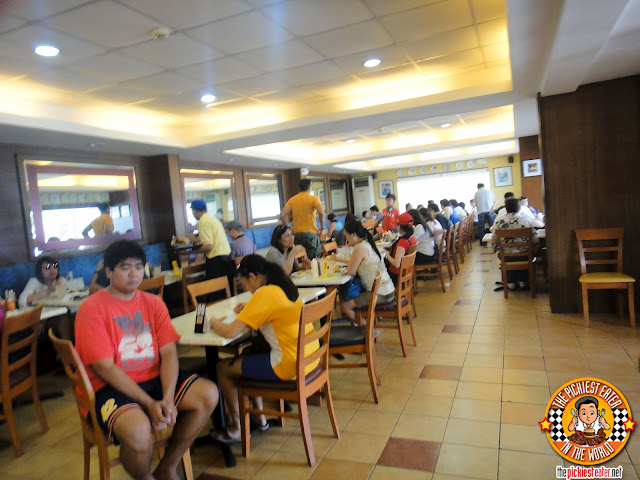 I'm not exactly sure, but based on what I've seen, Meat Plus has undergone at least three expansions since my first visit there in 2009, proving that it's one of, (if not THE MOST) in demand restaurant in Subic. It doesn't matter though, because the place still gets filled up pretty quickly, and is usually jam packed during the height of meal hours. 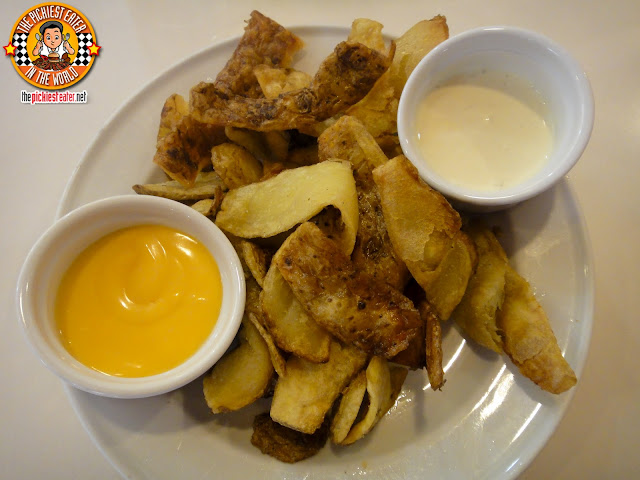 For appetizers, we started off with the Potato skins. They were thin sliced skins that were deep fried into crispy awesomeness. It came with two kind of dips, a rich cheese sauce, and a creamy garlic dip. I honestly couldn't decide which I like better, so I will admit that I was guilty of "double dipping". 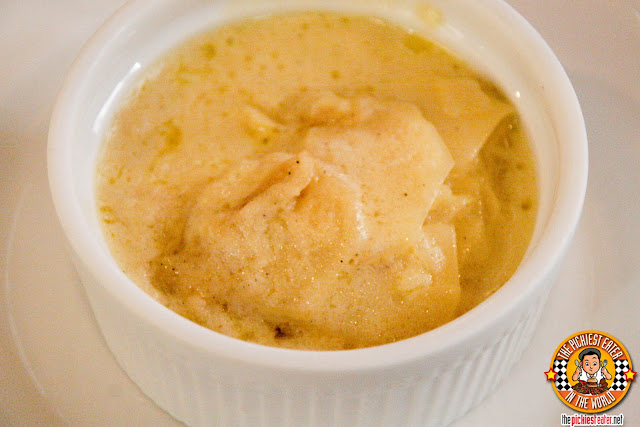 No meal in Meat Plus is complete without a side order of THE BOMB. Yes, this is the very same bomb that I mentioned during my first Tender Bob's post (whose pictures were taken before my days as a blogger, so please forgive the quality). The Bomb is an amazing bowl of scalloped potatoes, magnificently blended with a combination of cream, cheese and garlic and other spices, to make this dish an ideal companion to any meat dish. Hell, you can eat it alone if you wanted to. But then you'd be missing out on some awesome meat dishes, so forget I said that. 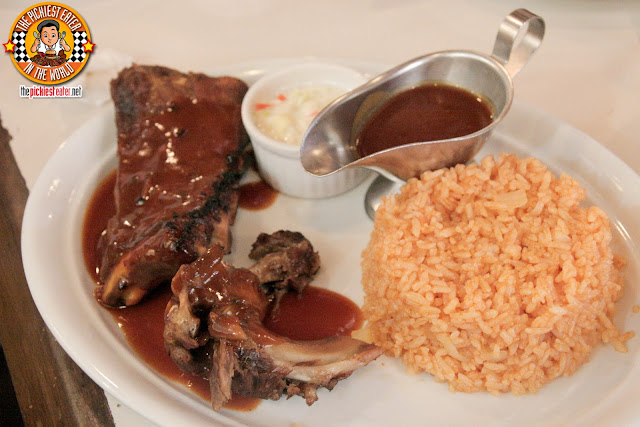 My buddy Dolps ordered the Pork Spare Ribs Meal (P200), which is, as you can imagine, something that I had been contemplating to order. I'll be honest with you, it wasn't the prettiest order of baby back ribs I had ever seen. It was basically two pieces, with the second piece looking like something like a dog had chewed on prior to serving it to us.


Fortunately though, it tasted way better than how it looked.


The meat tore cleanly off the bone, and had a delicious grilled smokiness embedded into it. The sweet BBQ sauce wasn't anything special, truth be told, with the flavor of meat good enough to stand out on its own. 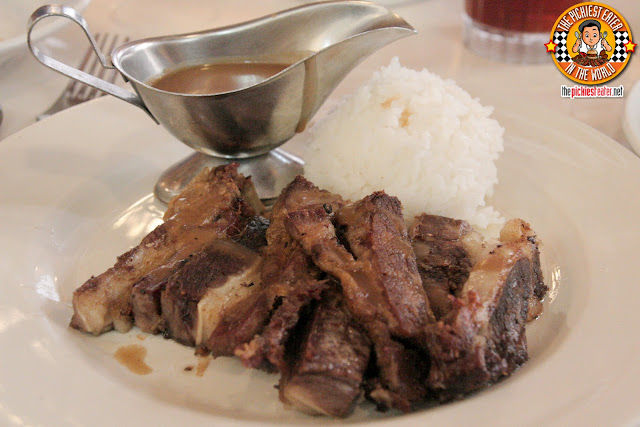 After being unable to decide whether to get the Baby Back ribs or the Ribeye, I ended up ordering the Oven Roasted U.S. Beef Belly Meal (P185) as I always do when I'm at Meat Plus. The mean is roasted until it becomes a bit crunchy, with the edges are lined with fat and also becomes crispy. The Amazing flavor is further enhanced by the creamy gravy that it comes with. 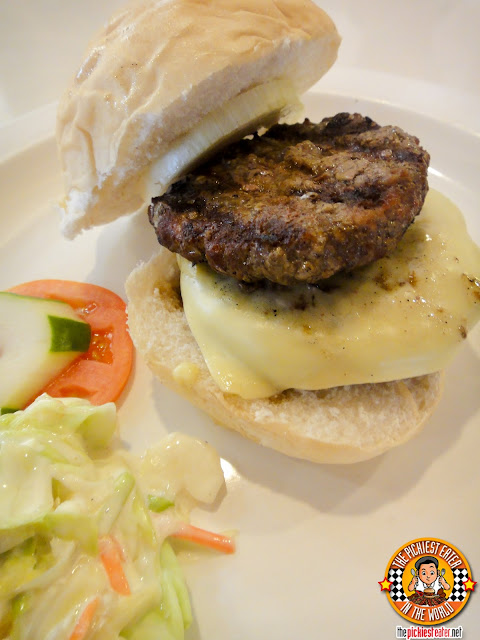 My Friend ordered the Meat Plus Burger Meal (P190) which consisted of two thick US Beef patties and very little imagination apart from that. The patties and nice grill marks on them, with the bottom patty being blanketed with melted cheese. The bun was run of the mill, and the only thing added on to the burger to make it special was an onion roasted for a short time (would've been better if it were caramelized) and a slice of tomato.

Basically these were beautiful burger patties that just needed a bit more pizzazz to it. They're lucky that they're in Subic where their biggest burger competition is "Wimpy's", because they would get swallowed alive by the "Zark's Burgers", "Brothers Burgers" and "Burger Avenue"'s of the metro.
STEAKS 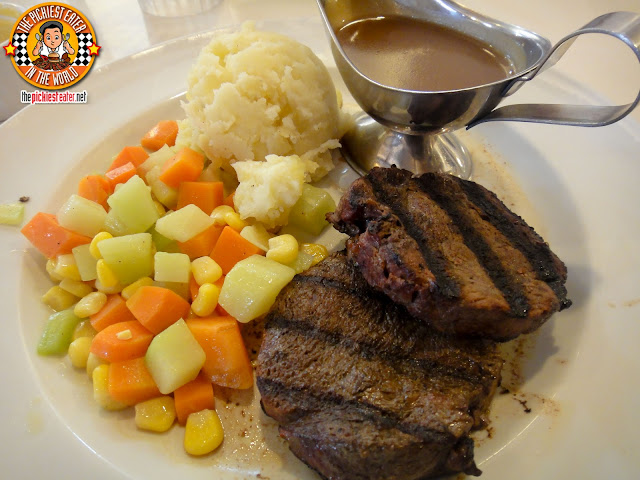 My dear friend Rain ordered the Tenderloin Steak Meal (P240), which came with a side of Mashed Potatoes and buttered vegetables. In my eyes, the tenderloin cut is the worst cut of steak ever invented. It's so lean with no traces of fat on it, that it looks rather dry.


Rain, however assured me the meat was juicy and tender, despite its appearance. 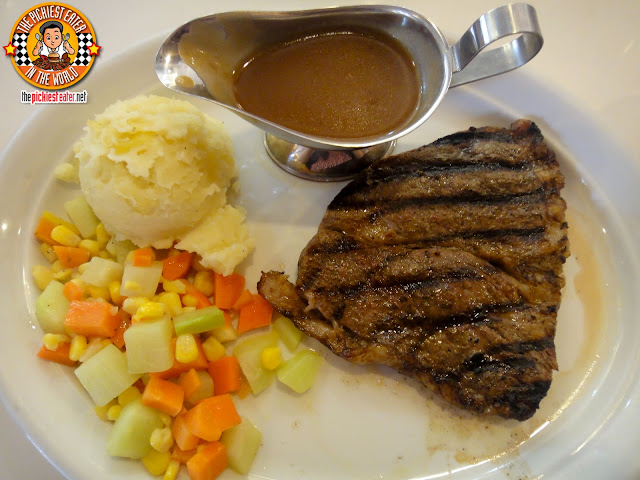 Dimpy's Topsirloin Value Meal (P270) seemed more appetizing, mainly because of the bit of fat hanging on the edge. As with Rain's steak, Dimpy's was also incredibly moist, and had a beautiful flavor of the beef. The gorgeous grill char marks gave the steak a nice smokey flavor.


My only comment was that, Dimpy requested her steak to be cooked to medium well, but it was served to her a bit pinker than she had preferred. She had it re-fired, which they graciously did, and all was well in the world once again, without Dimpy having to resort to violence of any sort (As you'll see she's capable of in the pictures below). 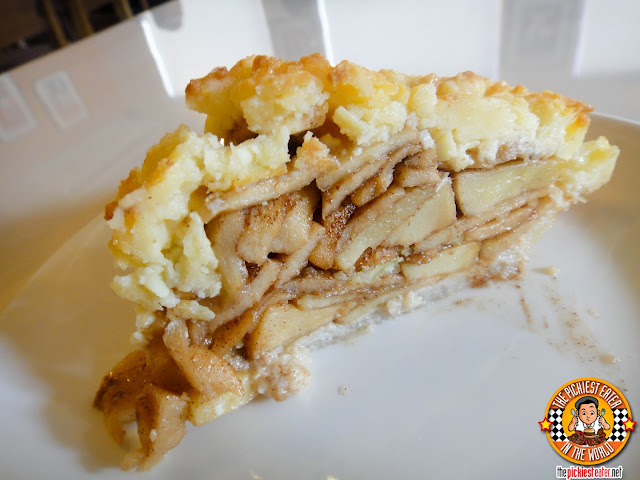 It's hard for an apple pie to impress me because my brother makes a pretty mean apple crumble. Given that, Its safe to say that Meat Plus's Freshly Baked Apple pie was just average. It had a generous amount of apple slices as its filling, but flavor-wise, it lacked a little bit of of punch. 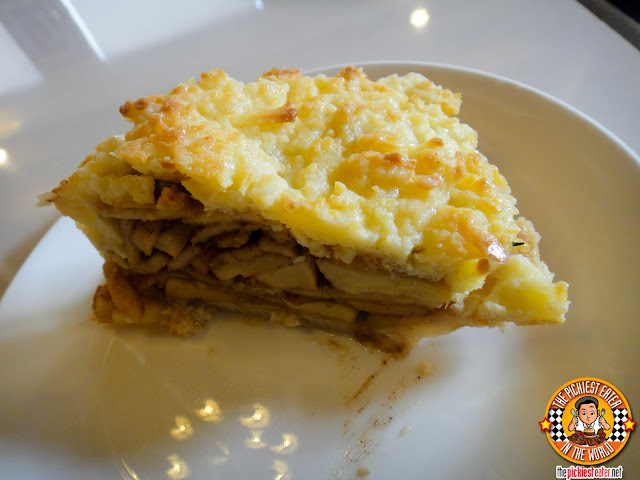 The baked cheese topping was a nice touch, and added another dimension to the pie, but again, nothing to make it memorable. The crust also was sufficient, but nothing groundbreaking. 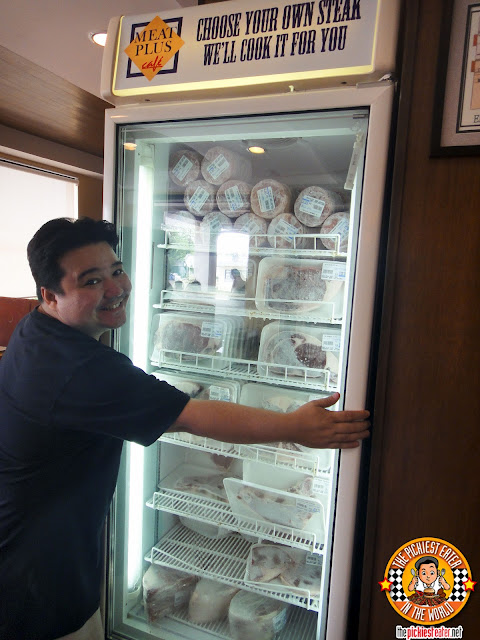 I hate to belabor the obvious, but any trip to Meat Plus should be all about the Meat. You might not get the tenderness of the more expensive steakhouses around, but when you consider the quality of the steaks for the price, you're getting a fantastic deal, and should be added as one of the tourist attractions when visiting Subic! 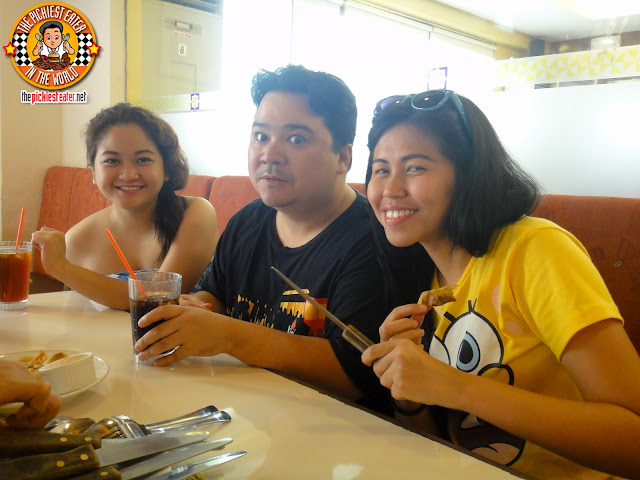 From Left: Rizza, Me, and Dimpy,
who wasn't pleased with her steak being served to her rare. 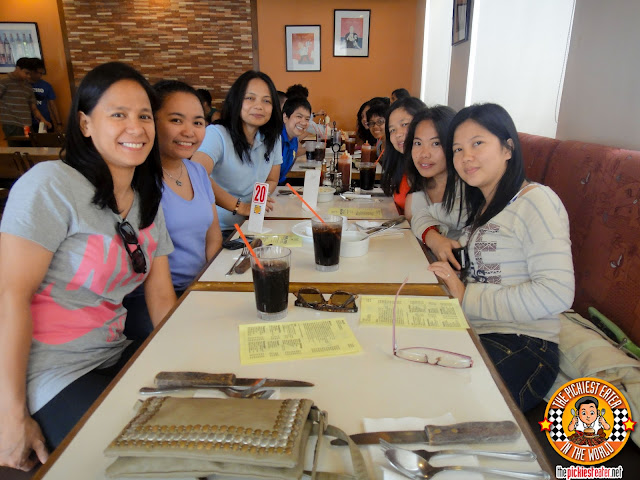 The Lovely Ladies of PostManila 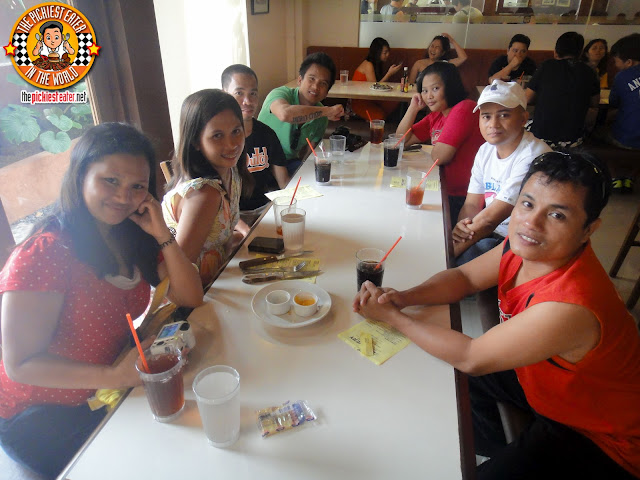 The PostManila admin Staff Rockin' it at Meat Plus 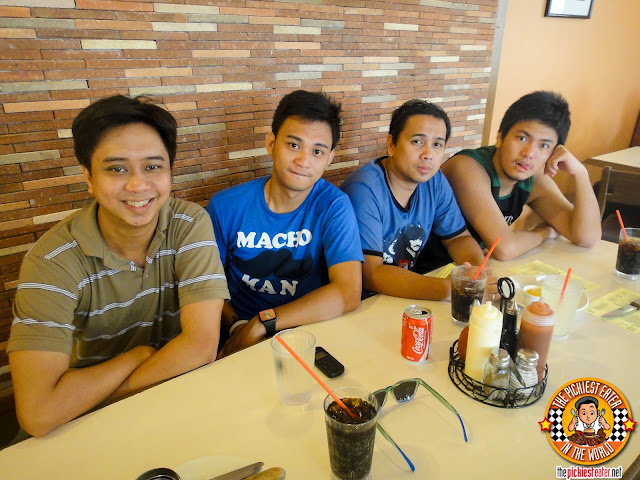 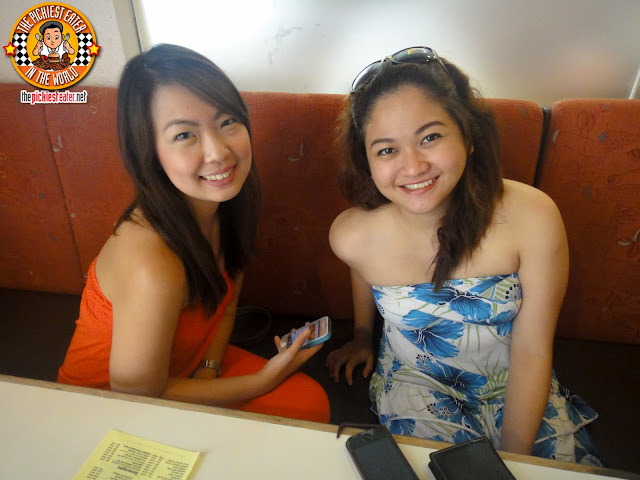 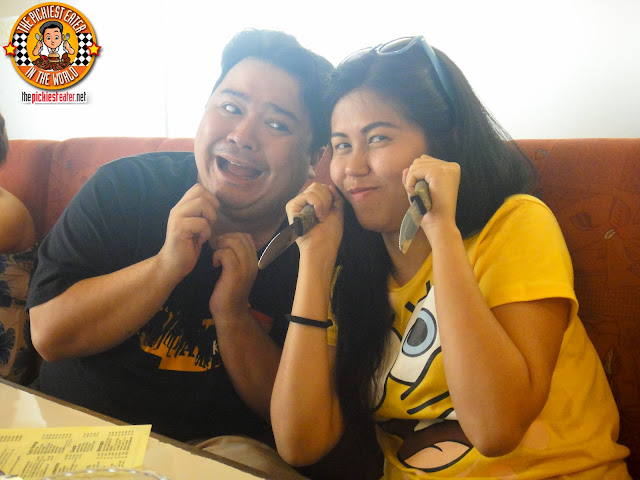 Don't make Dimpy Hungry.
You Won't like her when she's hungry. 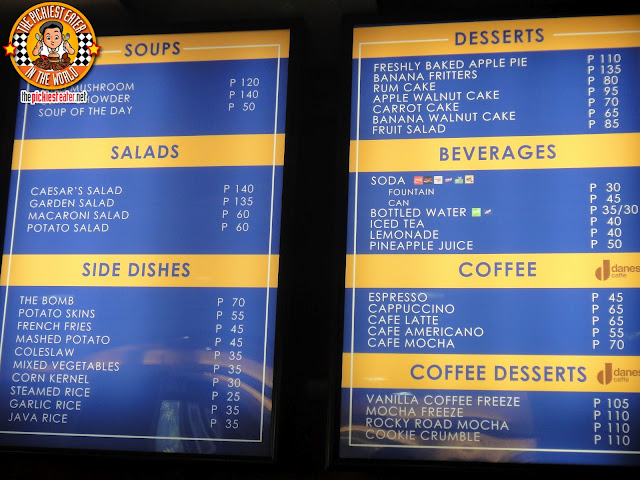 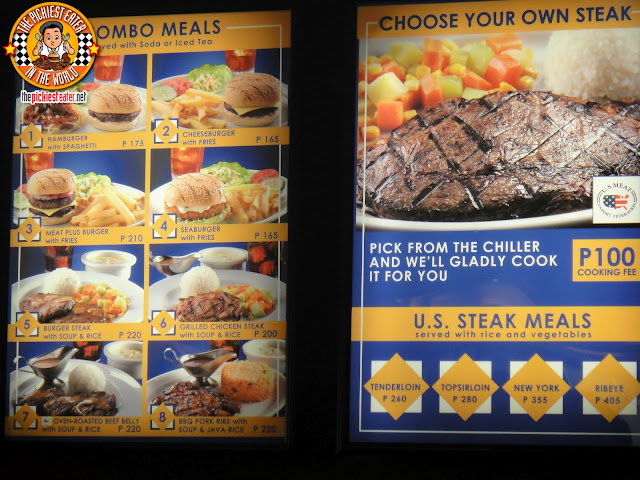 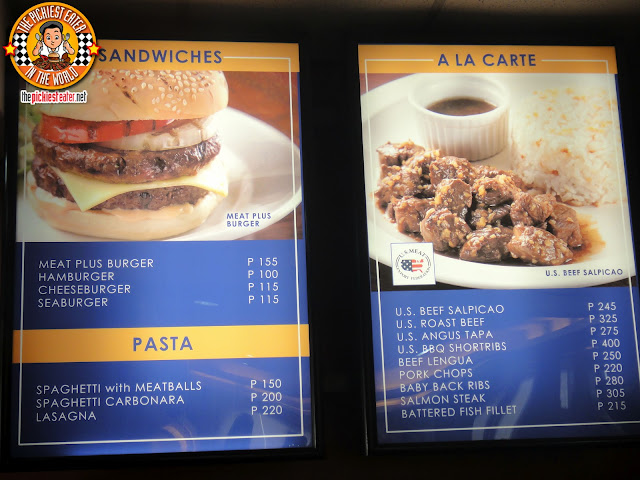 Posted by The Pickiest Eater at 12:20 PM