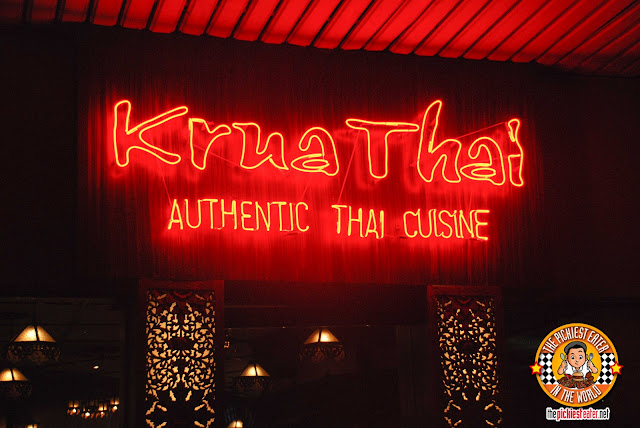 My family means everything to me, so you can imagine how my trip to Cebu last May was perhaps one of the most amazing vacations I've ever had in my life. We haven't gone on a vacation all together in years, and this was our first trip for Rina and I as parents.

Even before we left for Cebu, I already planned the restaurants that I wanted to check out. So during the evening, I asked my dad's permission to leave Portofino Resort, where we were staying, and go out for dinner.

My dad was quick to reply, "No need, I'm taking you all out for dinner." I told him that was great, and I had a whole list of places that I wanted to suggest, but all he could say, "Sorry, your mom already chose where we're going to eat.. Krua Thai".

I've argued with my mother many times, and I've come to accept that there was no winning an arguement with her when she has her heart set on something. So I decided that I would use that list for another day, and prepared for our family dinner at Krua Thai.

Funnily enough, the last time I was in Krua Thai, I was with the exact same people, because I had treated my entire family for dinner. I had just moved out of my parent's home to be on my own for the first time, and they all chipped in to help me do a little "mini renovation" on the small beat up house that I had rented. My thank you Dinner to them was chosen by my mom, who helped spearhead the brigade.. You guessed it.. Krua Thai.

Thankfully, Krua Thai opened a branch in Marina Mall in Mactan a few years back so it wasn't a long trip to the city. After a long day of Island Hopping, I was starving. 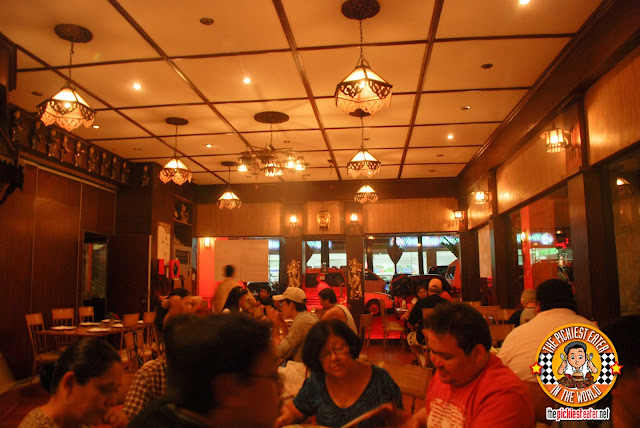 The decors do a terrific job of making you believe that you're in a restaurant that claims to serve authentic Thai Food. Wooden interiors with intricate oriental thai inspired designs, as well as ornaments with those Thai icons on them. 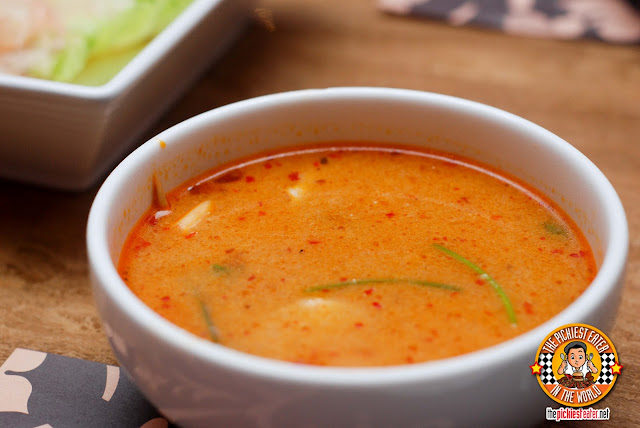 My brother in law Julio kicked off the meal with some Tom Yum Prawn Soup (P200 Small, P240 Large). Since it's famous for its heat, and i'm infamous for my hyper-acidity, I unfortunately had to refrain from trying it, or risk spending the rest of my time in Cebu in the toilet.

Julio commended the generous helpings of prawns and the rich punch the heat of the chili's gave the soup. 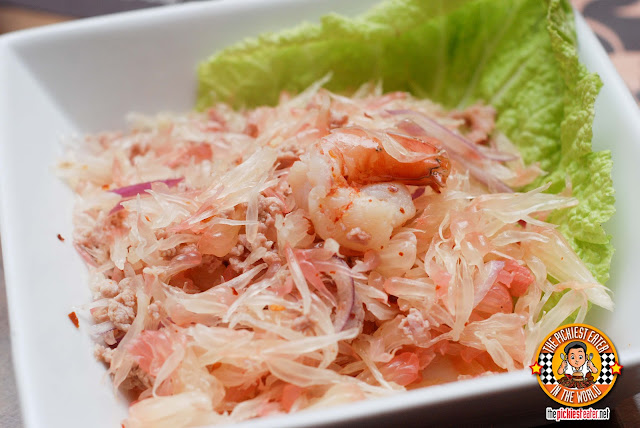 Everyone enjoyed the Thai Pomelo Salad (P150). Truth be told, I didn't try it because.. umm.. I wanted to make sure that there was enough for everyone else.. cuz.. you know.. that's how generous a guy I am. 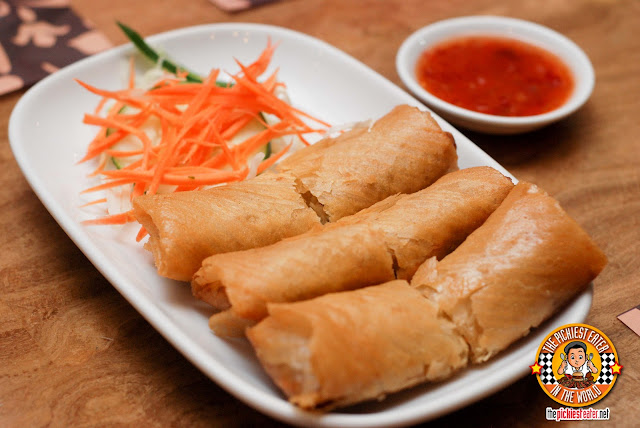 The Thai Spring rolls were something more up my alley. It was deep fried to a perfect golden brown, and the filling of meat and veggies had a nice flavor on its own. The sweet chili sauce was a fitting dip for it. 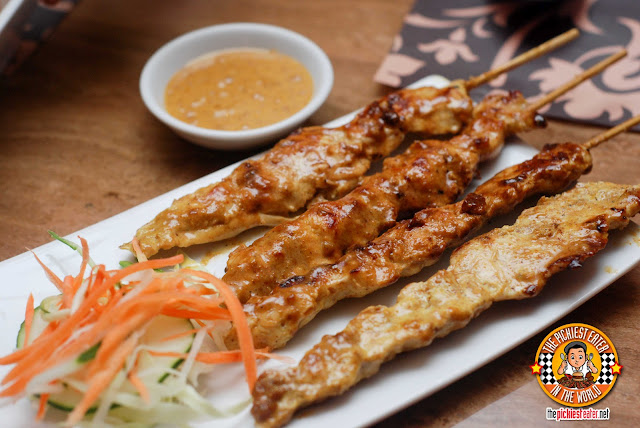 The Chicken Satay (P145) consisted of juicy grilled chicken fillet skewers bathed in a tasty peanut sauce. The sauce had a distinct sweetness that countered the smokiness of the chicken meat. 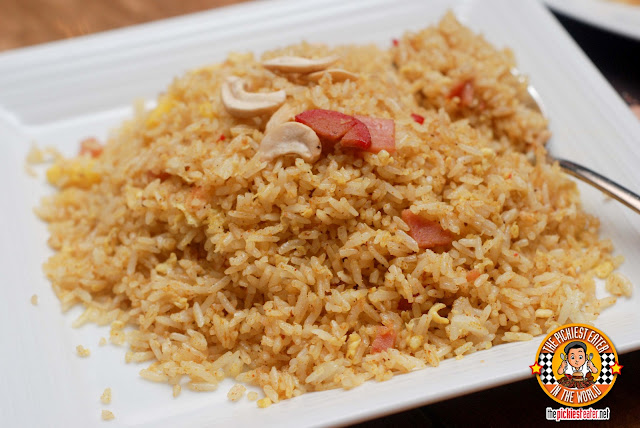 I found it a little odd that the supposedly authentic Pineapple Fried Rice of Krua Thai had chopped up bits of hotdog in it. I may be wrong but I seriously doubt that's how they do it down at Bangkok. It was actually pretty good though, with small chunks of pineapple to add a little sweetness to the fried rice.


If I recall correctly, ordering Pineapple Fried Rice from Krua Thai was a bit of a novelty, because the rice was stuffed inside an actual pineapple. 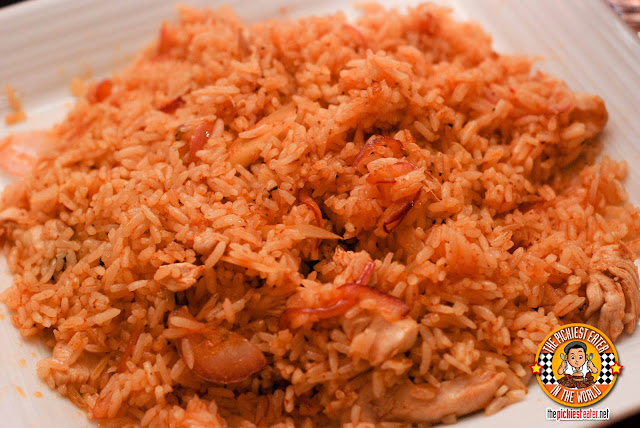 We also ordered the Tom Yum Chicken fried rice for a little variation. It had a some acid to it, and a touch of spiciness with chicken strips mixed into it. It was't bad at all, but the Pineapple rice was more to my liking. 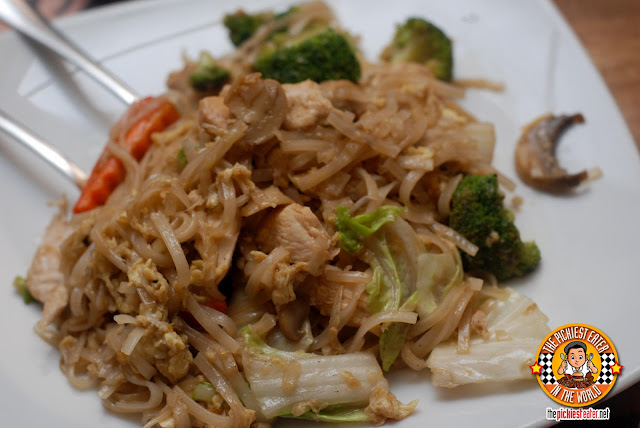 My cousin Neil was insistent that we try the Phad see-iew Noodles (P170), which I thought was Pad Thai at first glance. It kind of looked the same, maybe the noodles were a bit thinner than what I'm used to, and it had broccoli in it. It was actually a very delicious fried noodles, that had a nice mix of chicken, egg and other veggies in it. I didn't load up on it so much because I wanted to save up for the Phad Thai. 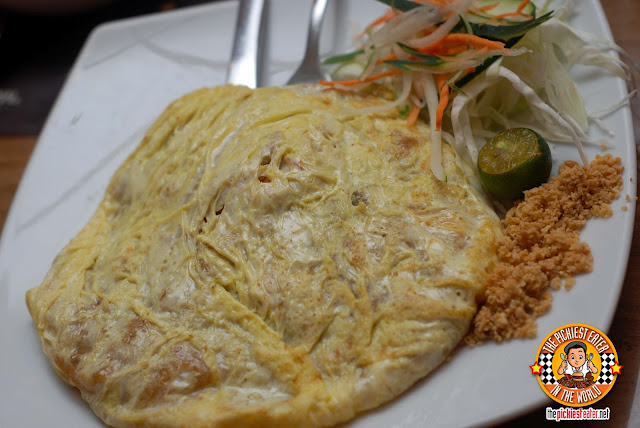 I asked my brother if my Phad Thai was ordered, and he said yes, then pointed at what I thought was someone's omelet 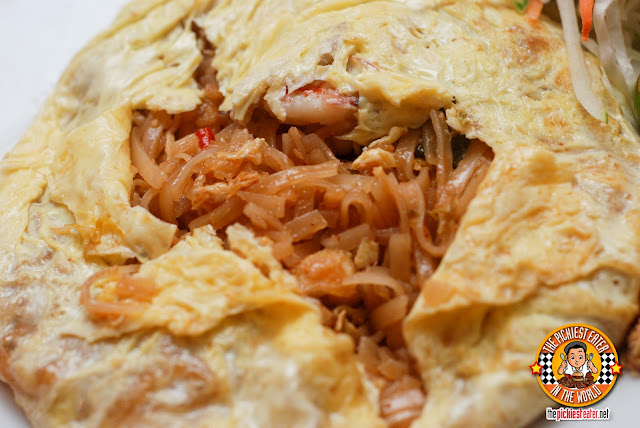 I sliced it open to find the egg had blanketed the Phad Thai Noodles into a little pocket. It had the right amount of acid and sweetness that created a nice balance of flavors. I also appreciated how they kept the ground up peanuts on the side instead of pouring it on top of the entire dish.


For you shrimp lovers, they had some very fat pieces of shrimp mixed into it as well. 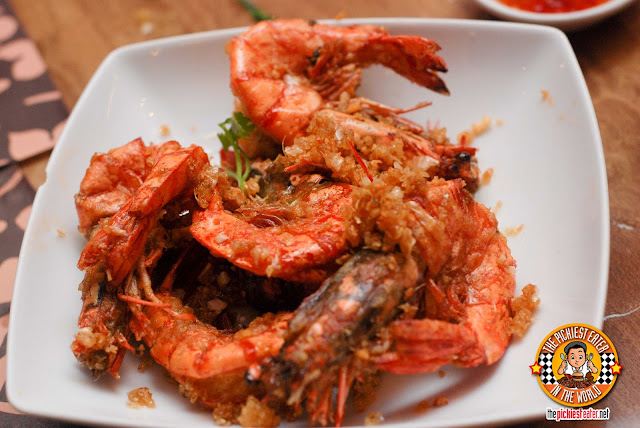 But if you're REALLY into shrimp, I strong suggest you order the sauteed Prawn in Garlic, which Rina adored. I don't eat prawns, but even I had to admit that this looked very appetizing. The aroma of the garlic mixed with the prawn meat created a pretty delicious dish. 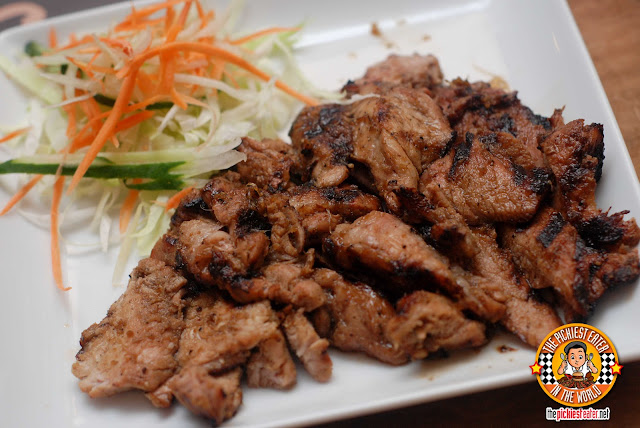 I was a bit disappointed with the Thai Grilled Pork in Honey. First off, it was a little bit dry. Second of all, it wasn't in honey. Maybe it was brushed in honey during grilling, but you wouldn't know it by seeing it and tasting it. It honest tasted like a grilled piece of pork with the smallest hint of sweetness. 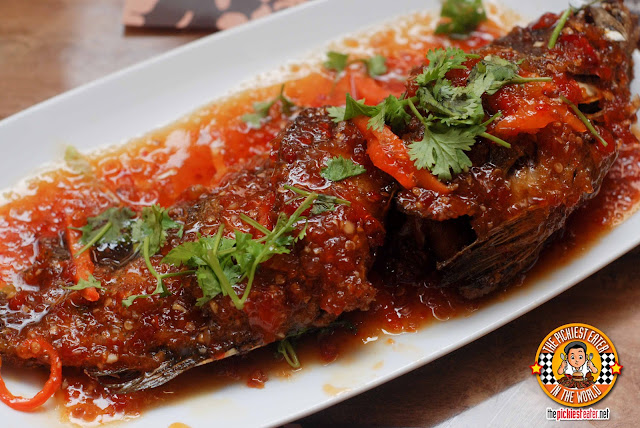 My mom finally finally satisfied her craving that had been building up for years now, when she ordered the Fried Fish in Thai Sweet and Spicy Sauce. It was actually an immaculately cooked piece of Lapu Lapu, bathed from head to toe (well, fin actually) in a rich sweet chili sauce.

It had an incredible medley of flavors to it, but I could risk getting seconds for fear of getting my hand stabbed with a fork by my very own mother. 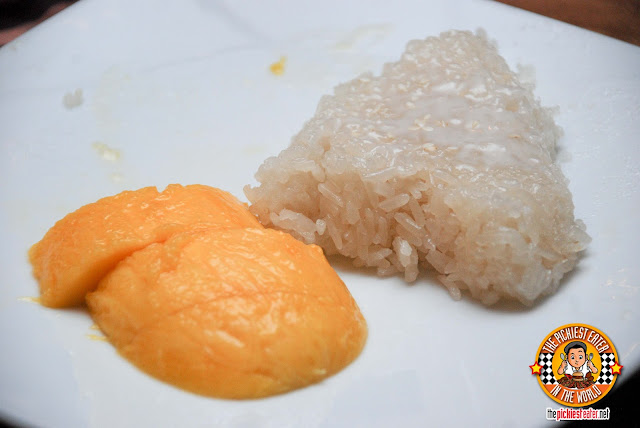 The Sticky Rice with Mango was honestly nothing to crow about. The rice had a creamy, "coco-nutty" taste, but paled in comparison to other places I've tried. I should've just ordered the Cookies and Cream Split (That's what I get for trying to eat "Healthy"!) 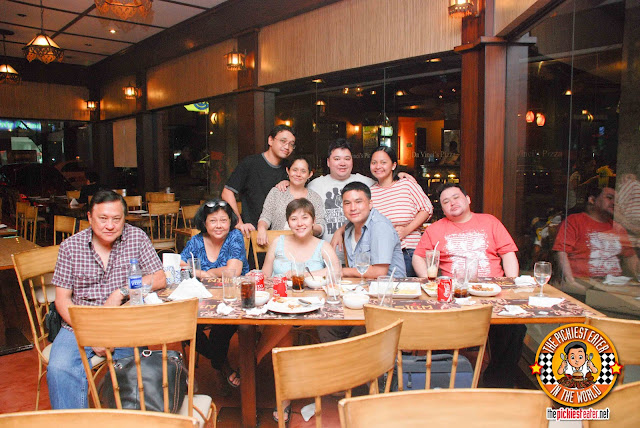 There were a few missteps here and there, but on the whole, this was an amazing dinner, and according to my mom, one that was definitely worth the wait! I'm a big fan of Thai food and I would say that Krua Thai is definitely one of the better Thai Restaurants I've been to in awhile. 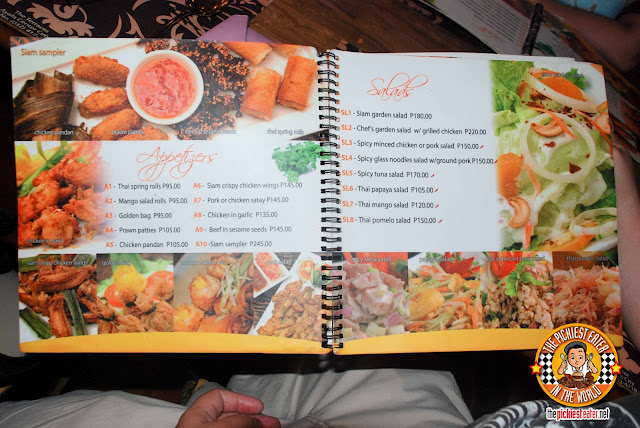 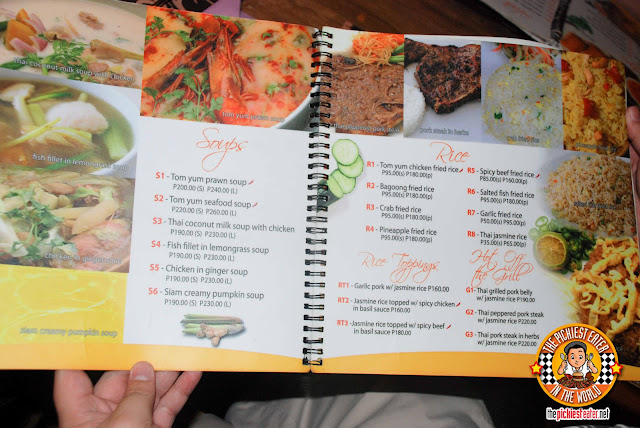 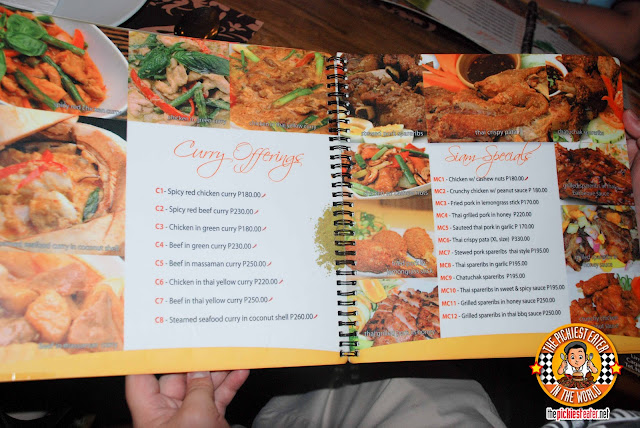 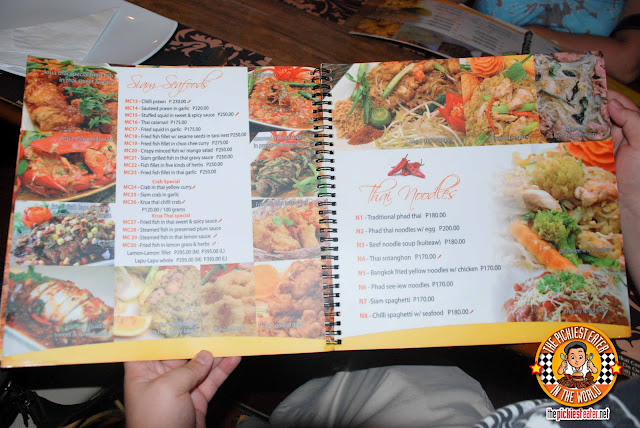 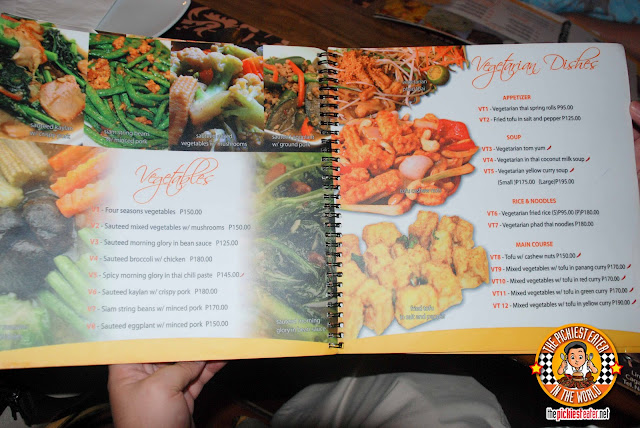 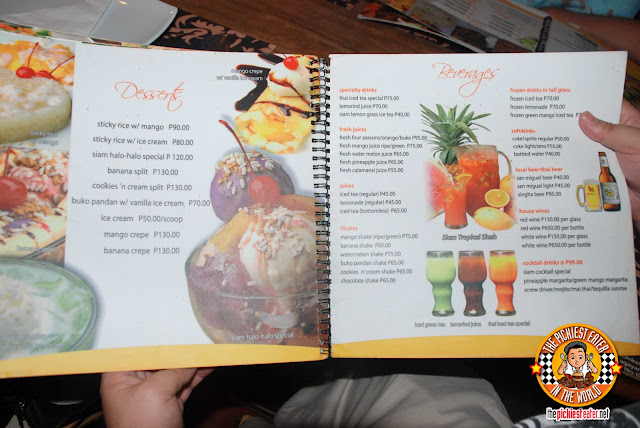