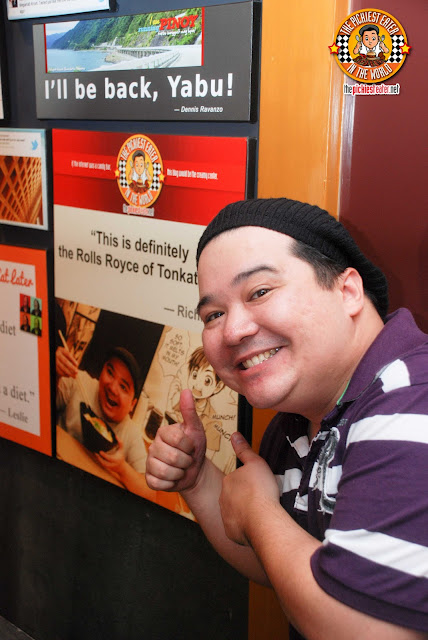 A couple of months back, I wrote about my enjoyable experience at Yabu: the House of Katsu, which became one of my more popular posts. The booth we were sitting at had a picture on the wall of an anime boy foodgasming to a bowl of yummy Katsu. Rina thought it would be funny if i copied the pose of the boy. Me, being the obedient (not to mention) guillible husband i am, gamely did the pose.. not knowing months later, that picture would come back to haunt me..

I was invited by the good people behind Yabu: House of Katsu to their event entitled "Katsu for 25: An Exclusive Dinner for the most influential Bloggers, Personalities and Tastemakers". When I got the email from Denise, Yabu's Brand Manager, I thought it was a wrong send. When I realized it wasn't a fluke, I was deeply flattered that my blog would be mentioned in the same breath as some of most prominent names in the blogging world.


I was stoked to find out that three Food bloggers that I had already met before were attending the event.. Jill aka The Food Scout, Richard aka Tales from The Tummy, and Franny Wanny. Also joining us, was the lifestyle blogger known as "Animetric".

After that, I didn't recognize anyone else. However, I did get the feeling that I was a little bit under dressed, because everyone else in the room looked like they had just walked off the set of "Sex In The City". I asked Richard who they were and he simply said, "Fashion Bloggers.", and in that instance it made total sense. This was my first time to see fashion bloggers altogether, and they looked like a fun bunch.


I honestly don't know the first thing about fashion. My mentality is to just wear whatever still fits. To me, it's pretty simple. Bloggers are bloggers. Everyone has their own passions. Mine is food. I take pictures of the food on my plate, and write about if I liked it or not, and where I got it. They do the exact same thing.. except with their outfits.


Anyone who blogs is considered kindred to my soul, so I say more power to them!

Going back to the event, we got to meet in person some of the brilliant minds behind Yabu: The House of Katsu.. 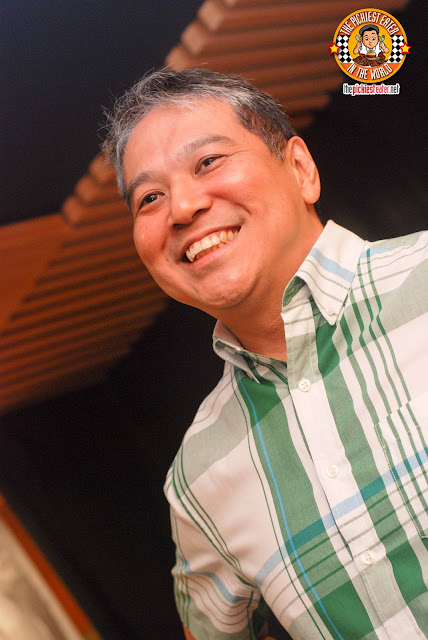 Co-Owner, Mr. Gerry Santos, who happens to be a friend of the man that recommended Yabu to me in the first place, Direk Yeyey. 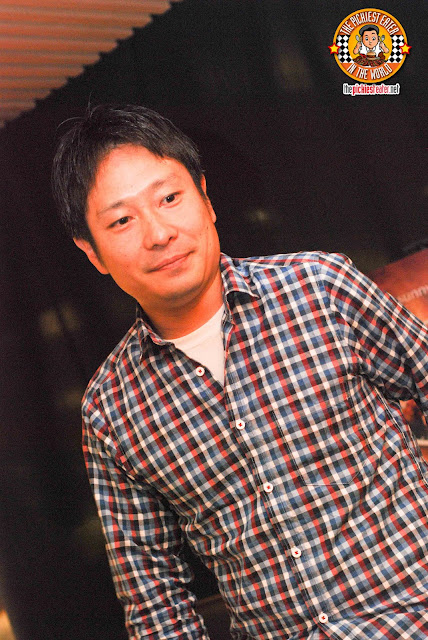 The Katsu Master himself, fresh from Japan, Chef Kazuya Takeda. I was quite impressed with his take on food, and his dedication to preparing only authentic Katsu to his customers. 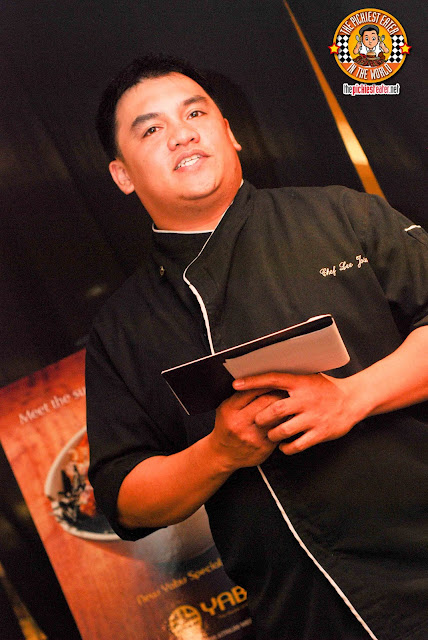 The man tasked to carry on the legacy of Chef Kazuya here in the Philippines is Chef Lee Jose. I've got to say, basing it on my past two visits to Yabu, I've got to say that he's done an amazing job. 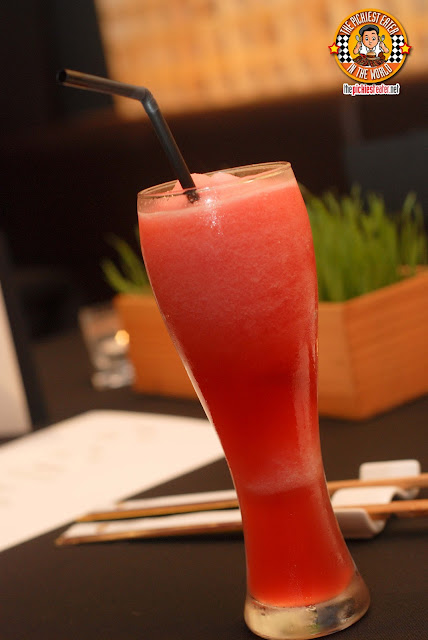 I started off my meal with a tall Watermelon Shake. Though I'm more of a chocolate milkshake kind of guy, I have to say that this fruit shake was very refreshing. Since I don't think watermelon was acidic, this is something that I would definitely order again. 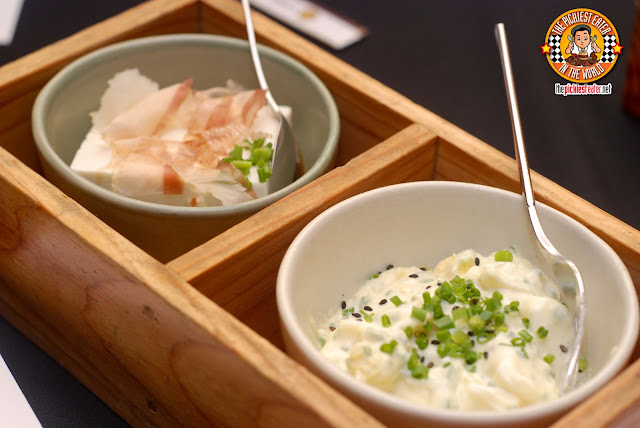 For appetizers, we were given Hiyayakko Tofu and.. what I thought was egg and potato salad. Apparently I was wrong. This wasn't just any egg & potato salad.. this was a salad that was not lacking in confidence. This was the SUPERIOR Egg and Potato salad. 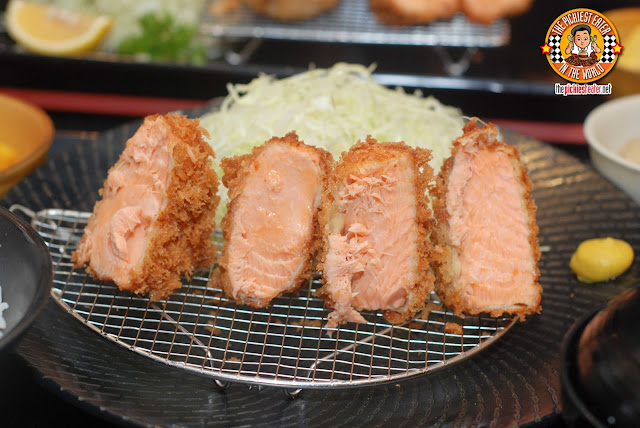 The reason for the whole event was to introduce the newest additions to the Yabu menu to the public. The first was something that would please those of you that want a reprieve from red meat.. The Salmon Katsu Set Meal. Salmon is by far healthier than pork, but it could be just as hearty as swine. The Salmon Katsu was delicately coated with Yabu's trademark Panko flakes, and the meat was cooked to a stunningly even light pink hue. 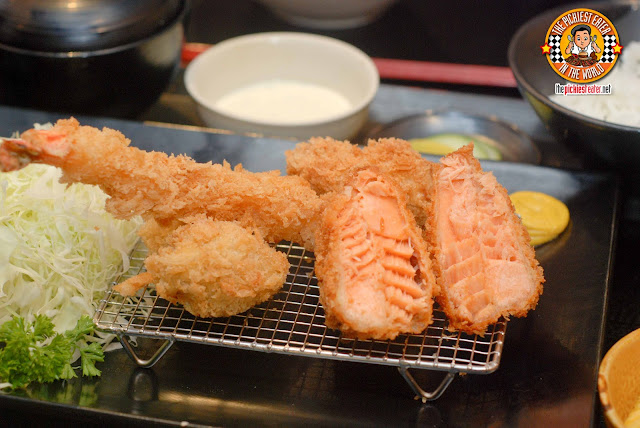 For hardcore seafood lovers who are looking for more variety in their meal, then Seafood Katsu Set No. 2 would be your equivalent of "Mana from Heaven". Think of two chunky pieces of the salmon that I was just talking about, and imagine him telling you, "Say Hello to my little friends!!".


Not only does it have the Salmon, but also a large juicy Tiger Prawn, a Hiroshima Jumbo Oyster, and the newest kid on Yabu's block.. The Creamy Crab. 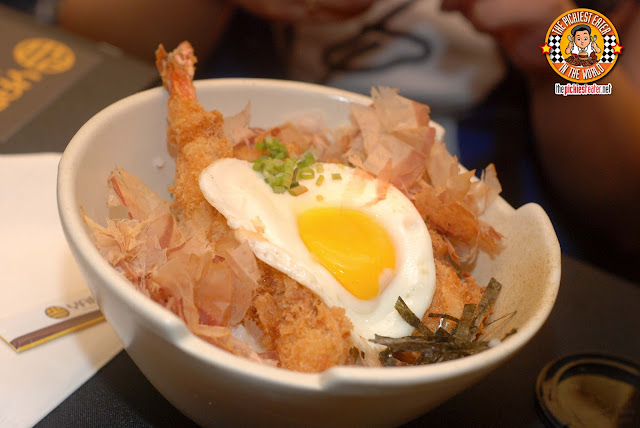 Another new addition to Yabu's Menu was the Special Katsudon, which is available in four different variants.. "Rosu", which I mentioned is pork with a bit more lining of fat, while "Hire" is the leaner version. It is also available in Chicken and an Ebi (Shrimp) & Fish combination. 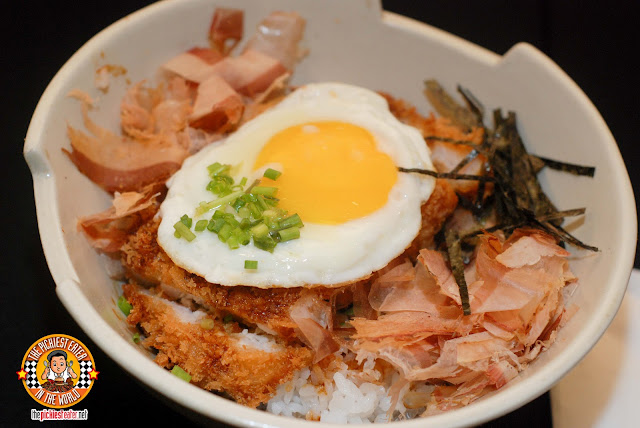 I loved how the three other bloggers and I, when asked what which variant we wanted to order, said "Rosu" nearly simultaneously.


Even just by looking at it though, it was clear that it was way different from the Rosu Katsudon Rina had ordered during our first visit to Yabu. It was more visually stunning and obviously more complex. I was excited to dig in because at first glance I thought there were thinly sliced strips of bacon on it. Then Richard of Tales from The Tummy explained to me that it's called "Bonito Flakes" - paper thin slices of air dried fish that added a smoky flavor to the meal. Also thrown into the mix are some strips of Nori and Shisho (Japanese Basil), and topped off with a perfectly cooked sunny side up fried egg. 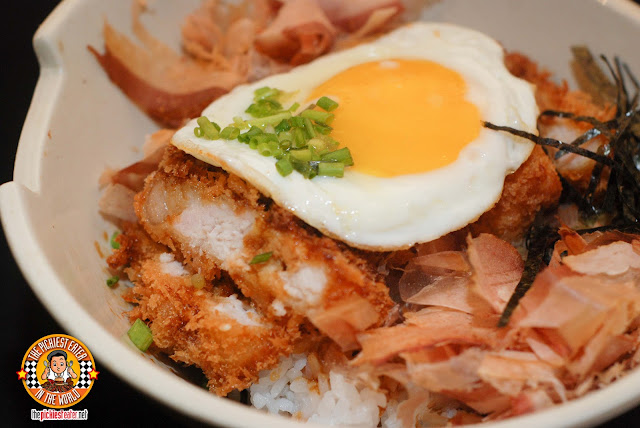 When You dig into the bowl, something you'll discover is the presence of a sauce, much different from the Tonkatsu sauce i'm used to. This was thin, miso-based sauce that was drizzled unto the rice and the Rosu pork meat. The sauce was thin enough to allow it to seep into the meat, and packed a wonderful flavor that had just a hint of sweetness to it. You wouldn't  think that all these components would work together, but they did so wonderfully.

This is definitely what I'm going to order when I go back. 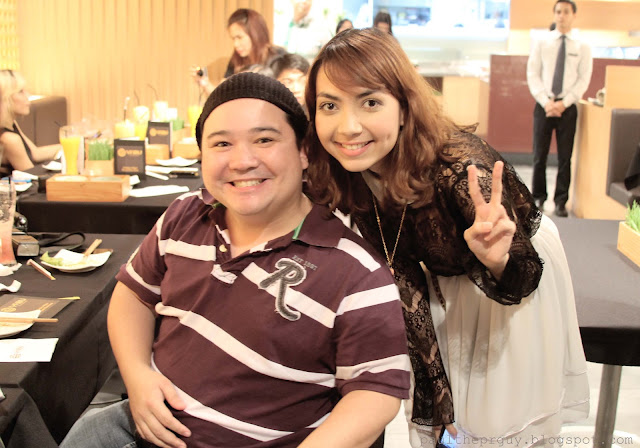 The Yabu "Katsu for 25" even was a memorable one for me. Not just because of the kick ass food, but because it was the first time that a complete stranger who reads my blog asked to have a picture taken with me! I've had a couple of people approach me in the past to say they like my blog, but to have a picture taken with me? Yup, that was a first!

The lovely young lady is Bestie, and she happens to be a fashion blogger as well. Check out her site HERE. Bestie and I made a deal. She's gonna help me re-work my wardrobe so I don't always look like I buy my clothes from "Garage-io Sale-io", and I'll introduce her to the best buffet restaurants around! Nice meeting you, Bestie!

Also, I didn't realize it then, but the person taking our picture, the blogger known as Paul The PR Guy, is someone that I had actually worked with a few years back!

He was a skinny teenager then, which is why I couldn't quite place him. hehe.. Great to see you again, buddy! I'm glad all is well! 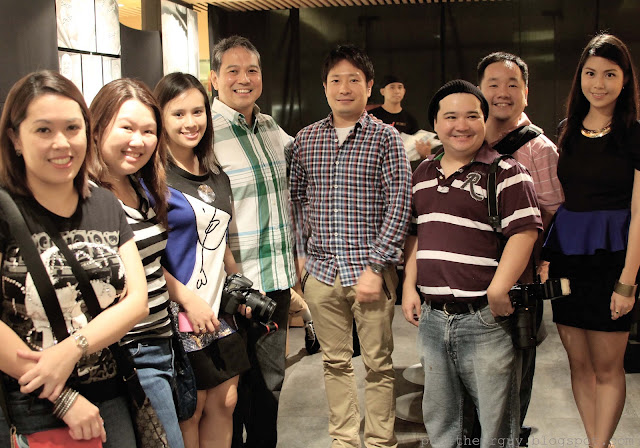 This picture is funny. Everyone has a huge smile looking straight at the camera, and I seem to be the only one distracted by all the gorgeous fashion bloggers at the side (I'm not "manyak", I swear). 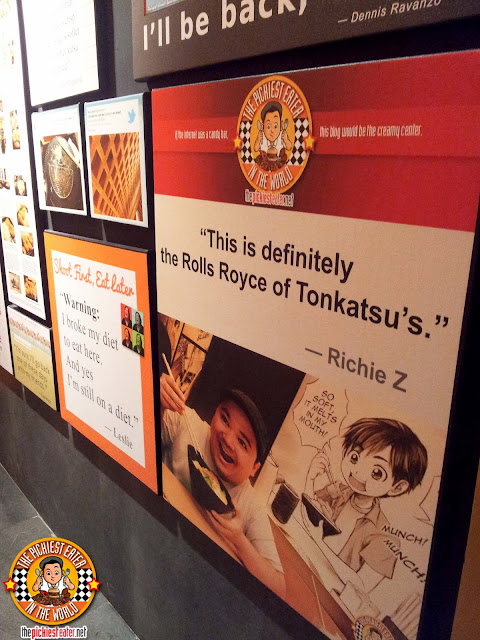 Something that shocked me and left me overwhelmed at the same time, was the "Blogger Wall" that led to the restroom. The people at Yabu decided to show bloggers a token of their appreciation by printing out excerpts from blogs that featured their restaurant, and hung them on the wall. But I gotta commend them, because they didn't just print it out in their Desk Jet printer and buy a frame from National Bookstore either. This was well thought out and designed tastefully.


And if you needed any more motivation in going to the toilet, they posted the picture Rina took of me with the Katsudon on their wall!!

On the whole, Yabu Brand Manager, the gorgeous Denise did a masterful job of running the event smoothly and keeping tabs on everyone that night. Congrats Denise, I had a blast!

I've got to say, it was truly an honor to shake the hand of Chef Kazuya for his willingness to bring his world class Katsu preparation skills to the Philippines is commendable.
While Mr. Gerry Santos deserves a courtesy call from President Aquino for his efforts in bringing our ties to the Japanese even closer! (Oh no wait.. it's the Chinese we're fighting with.. but still!)

I have a Two Thousand Peso GC from Yabu that I'm thinking of giving away but now that I read my post again and remembered everything I ate that night, I'm thinking that I want to use it.