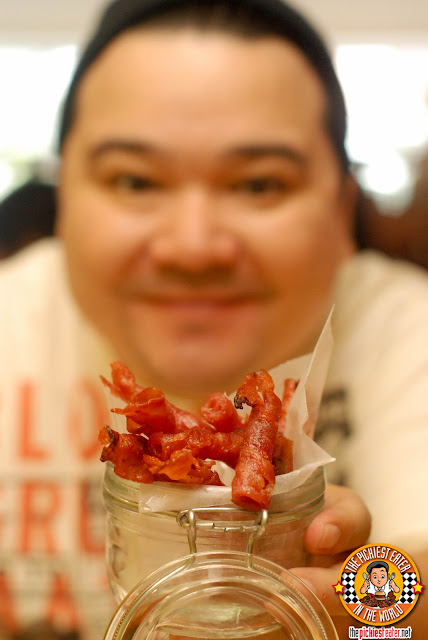 Yes, I am indeed holding a jar of bacon.

I could safely say that my love for breakfast food - particularly bacon- has reached legendary status. I get tagged on Facebook or mentioned on Twitter about bacon related subjects on a near-daily basis, by friends and complete strangers. And you know what's funny? I read every single one of those posts like it was a Greek epic.

Imagine how I felt when I found out that a restaurant dedicated to serving breakfast food opened up at The Fort Strip. Probably the same way you felt.. I must go there STAT! (Sorry, Rina was just watching Grey's Anatomy last night)

Upon hearing that The Early Bird Breakfast Club had recently opened its doors, I got the feeling that this restaurant was conceptualized specifically for someone like me. I am the embodiment of an "Early Bird", with waking up early not being a problem for me. I am also notoriously "Antukin".. By around 10pm i'm constantly yawning and dazed, which is precisely why you'd probably never see me at a bar or one of them so called "Super Clubs" (I'm an old Fogey, I know). Whenever Rina and I dine out, it's usually on a Saturday or Sunday morning (Not so traffic and you're guaranteed parking.. makes perfect sense, right?).

In other words, I truly am the Ultimate "Early Bird" (No double entendre, promise). 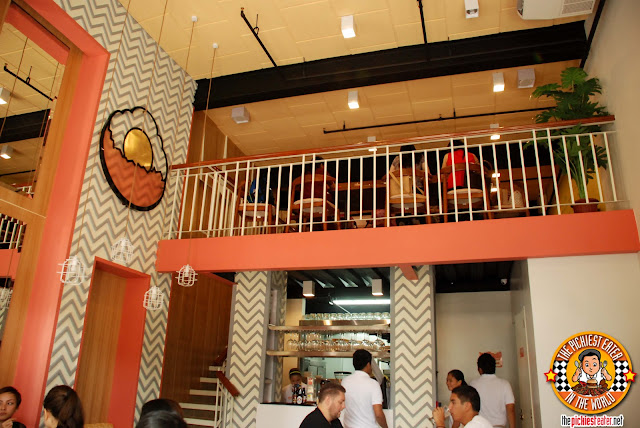 Walking through the doors, you get the feeling that the very essence that Early Bird Breakfast Club wants to invoke, is that you your mornings should start off with a smile, as in will carry you throughout your entire day. From the vibrant colors on the walls, to the warm smiles of the Staff, and the savory smell of cooked meats swirling through the air, no matter how foul your mood may be it's virtually impossible to go there without feeling a smile slowly breaking out. 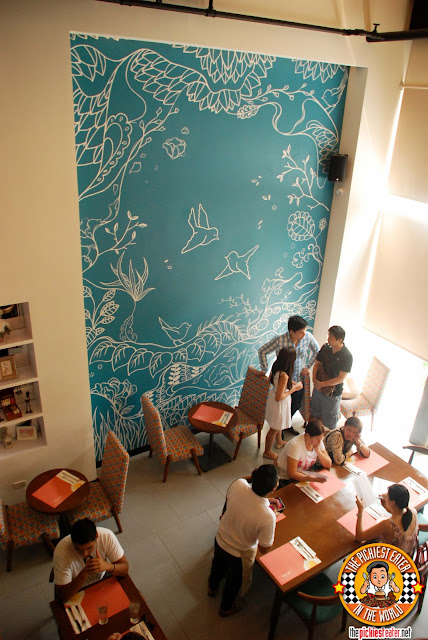 Adorned on the side wall, is a stunning floor to ceiling mural that's extremely soothing on the eyes.. There is a certain tranquility to it, that makes you think you could spend the entire day here with a good book or to sit down and write. 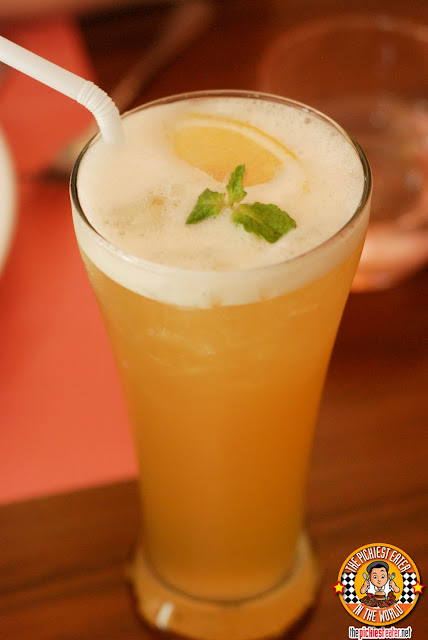 Rina loved the Early Bird Signature Iced Tea (P125). She's a fan of drinks that don't have strong flavors.. Subtle enough to tickle the taste buds without being overwhelming at the same time. It had a nice hint of citrus that complimented its natural sweetness. 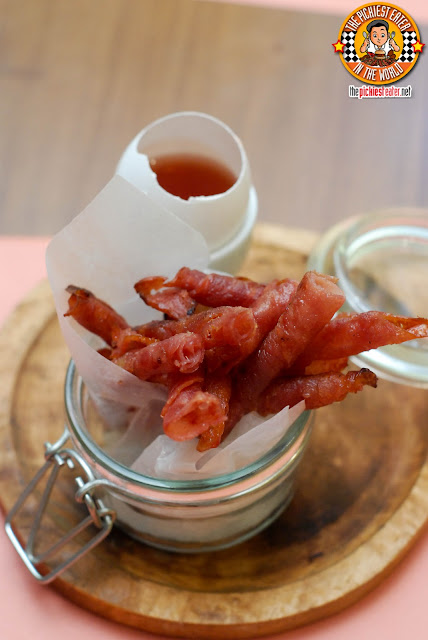 As soon as I found out from my blogger friend/idol (nax) TalesfromTheTummy that The Early Bird Breakfast Club had Bacon Twists (285), (Something that they didn't have yet during my first visit), I dropped everything I was doing and sped off to The Fort (My boss was wondering where I went in the middle of our meeting. Oh well.).

In theory, this was a fantastic idea. But execution wise, I think it still needed a little bit more work. Think about it: Rolled up strips of baked Bacon, with a side of Vermont Maple Syrup as a dip.. What's not to like?

The flavor of the bacon was delicious, as bacon tends to be. However I did notice that it was extremely leaner than I had liked it to have been. But that's fine, it was still bacon, so by default it was yummy. The problem was that it was a little but too chewy for my liking (What's English for "Makunat"?). I think if I got this fresher, it would have made a world of a difference.

(Note: We took it home to Rina's dad and he devoured it immediately.. So it's possible that i'm just really finicky when it comes to my bacon hehe) 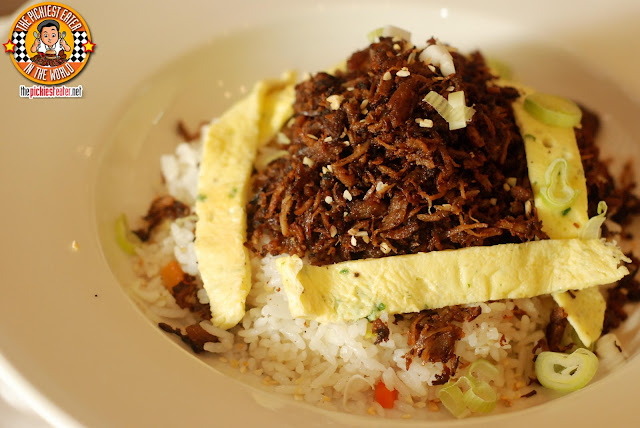 Something that caught my attention was the Adobo Sunrise (P315), which is their version of Adobo Flakes, topped over Early Bird's Breakfast Rice, surrounded by omelet strips. There wasn't anything about this dish that I didn't love.

First off, the Breakfast Rice: I loved it. It's sort of like a breakfast yang chow, that has just the right amount of flavor that won't overpower the main dish, but compliment it fully. 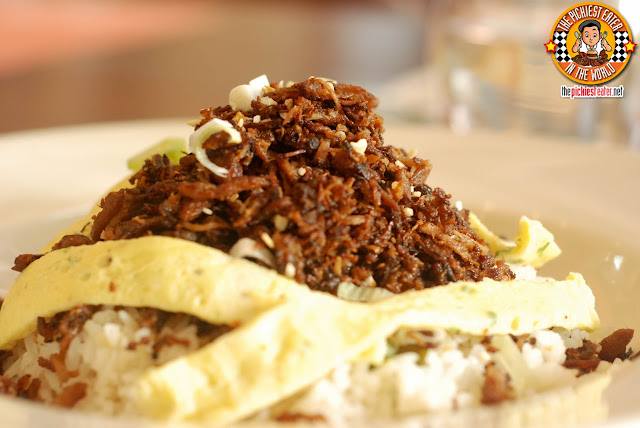 Secondly, the Adobo Flakes. I loved it. They didn't give me a "serving" of Adobo Flakes as much as they did a pile so high, that it required mountaineering skills to scale. It was toasted perfectly, so that it doesn't taste like it was burnt, as some Adobo Flakes tend to do. It had the right amount of acid from the vinegar on it, letting the flavor of the meat become the primary attraction of the dish.

I love dishes wherein all I need is one spoon to eat it, and after mashing up all the flakes into the rice, this was the epitome of "comfort food". 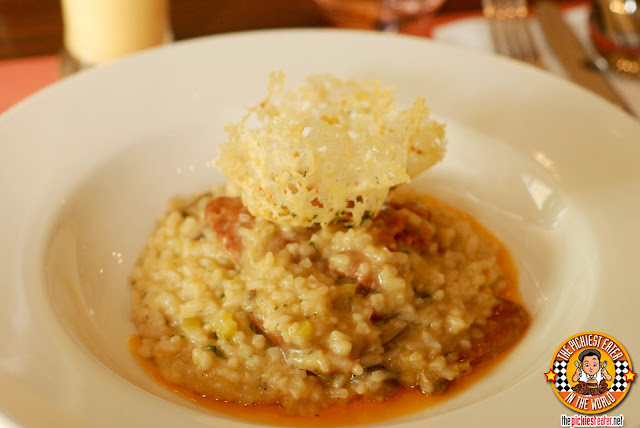 Rina has a fondness for Risotto, so it was pretty much a given that she'd be ordering the Chorizo and Mushroom Risotto (P465). The contrasting flavors of creaminess and acid work together nicely, to create an extremely filling dish. The Chorizo was the real deal. The thin slices were packed with flavor that coated the risotto, giving it a tangy punch.

The dish was topped off with a Parmigiano Reggiano, giving it another level of flavor. 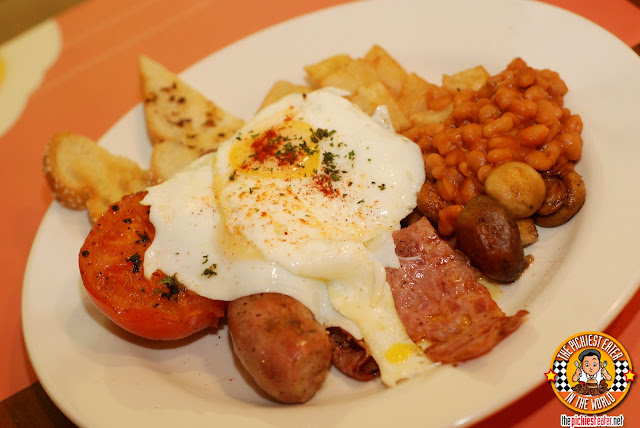 If you want breakfast for the big boys, I strongly suggest you order the Early Bird Full English (P495). This behemoth would put IHOP'S Breakfast Sampler platter to absolute shame. This was a platter for people who take their breakfast seriously. The meal starts with two strips of bacon, which, like the twists, has great flavor, but is a bit leaner than I would have preferred (If I'm going to eat bacon, I accept the fact that it's going to have fat in it). Part of the dish is a juicy English Banger that has a wonderful blend of pepper and herbs, that make even more delicious. The sides include hash potatoes, which is more like breakfast potatoes 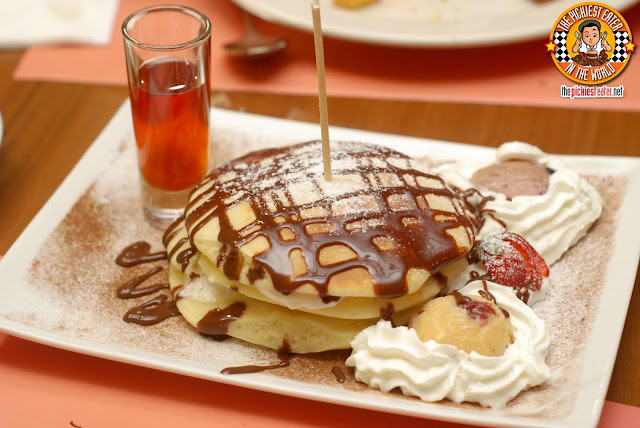 When you're at Early Bird Breakfast Club, you might not want to miss out on their Signature pancakes. The Early Bird Signature Pancakes (P325) is a short stack of fluffy pancakes drizzled with a generous drizzling of Chocolate syrup, and powdered sugar. On the side are some unique fruit infused cream butters that works perfectly with the Vermont Maple Syrup. 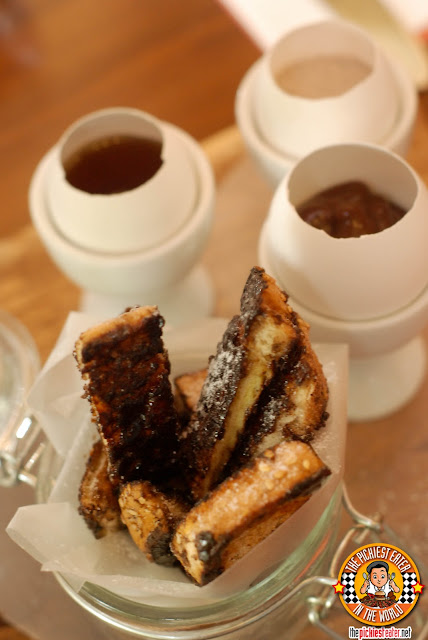 Another sweet treat that you should try is the French Toast Fondue (P215). Tasty Strips of French Toast, served with three different types of dips.. Chocolate, Cinnamon and Maple Syrup. (My favorite is the cinnamon). It's absolutely delicious! 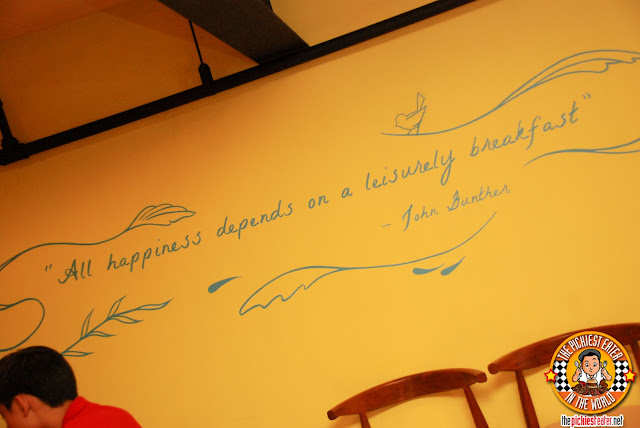 The people behind Early Bird Breakfast Club know what the most important meal of the day is all about. With all the hype IHOP is getting for its breakfast fare, this nice little nook at The Fort must not be overlooked. 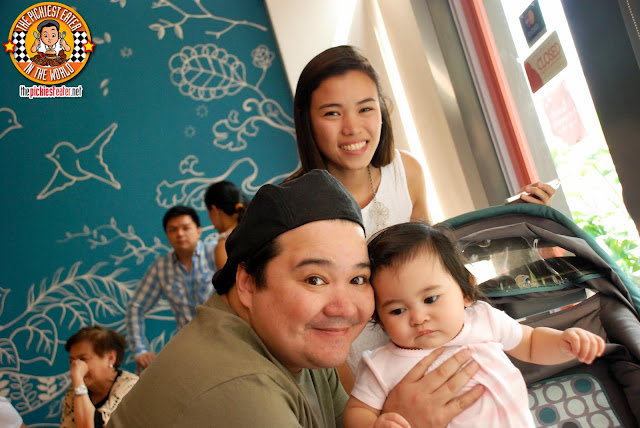 Baby Rain and I even got to meet the lovely owner, Ellen, who generously donated some GC's for a little giveaway from EARLY BIRD BREAKFAST CLUB!

Get a chance to win Gift Certificates for an order of their Signature Pancakes and two orders of French Toast Fondue! 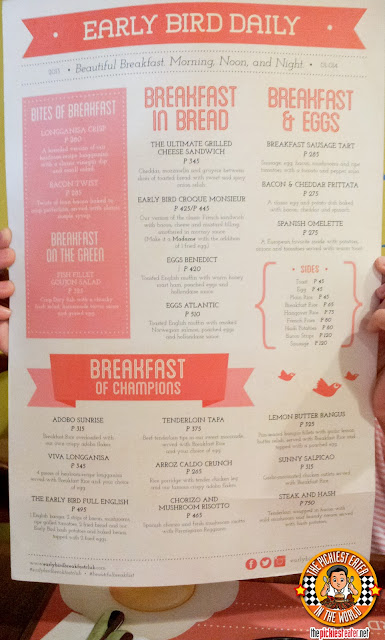 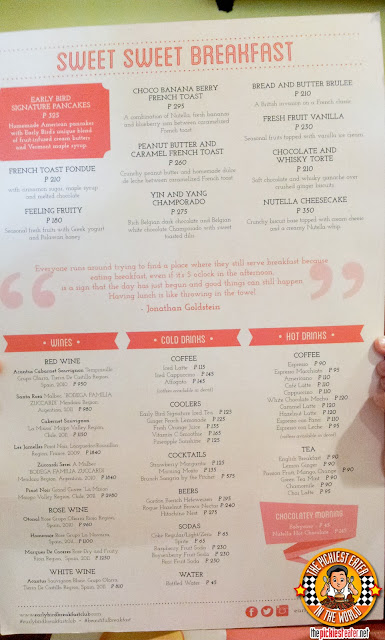 Posted by The Pickiest Eater at 1:09 AM