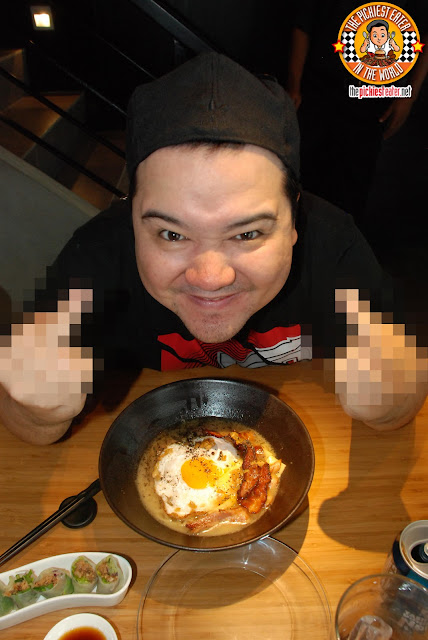 There are quite a few restaurants that I've been to, that I feel that were made with me specifically in mind. This, of course, is totally not true. However, in a world where new "healthy" concept restaurants seem to be popping up out of nowhere, one can understand my elation whenever I find a place that is unafraid to add a little something greasy or fatty into their dishes. And when I say "Greasy or Fatty", I mean Bacon.

Wrong Ramen is one of those places that captured my complete attention. With Ramen Houses being the new craze, and one claiming to be more authentic than the other, it's refreshing to see a Ramen Restaurant that takes the timeless Japanese ramen recipe, and dares to give it the proverbial finger.

Wrong Ramen knows that their way isn't the way ramen is supposed to be. And the funny part? that's exactly how they like it.

And you know what? 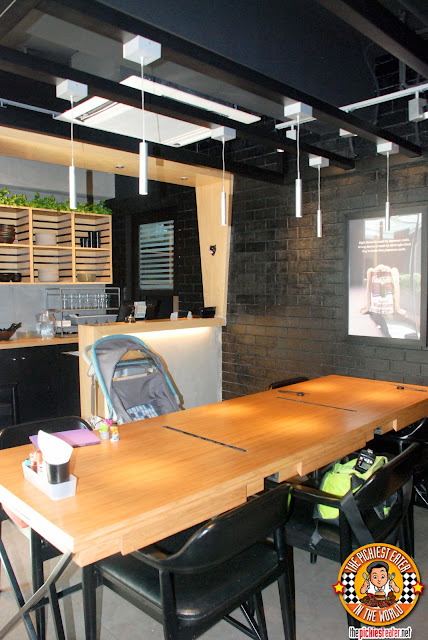 Wrong Ramen is a cozy little nook Located in Burgos Circle at The Fort (Right beside Bugsys). The place is rather cramped, so expect it to get filled up really quick.

We went rather early - around 11am - to make sure we got good seats. Apparently we were a little bit too excited for our own good, because Wrong Ramen wasn't opened yet. The waiter asked us to come back by around 12 noon. We hung around Coffee Bean & Tea Leaf and, grabbed a Frozen Almond Thingamajig (I forgot what its called, but it was fantastic) and went back by around 12:10pm. 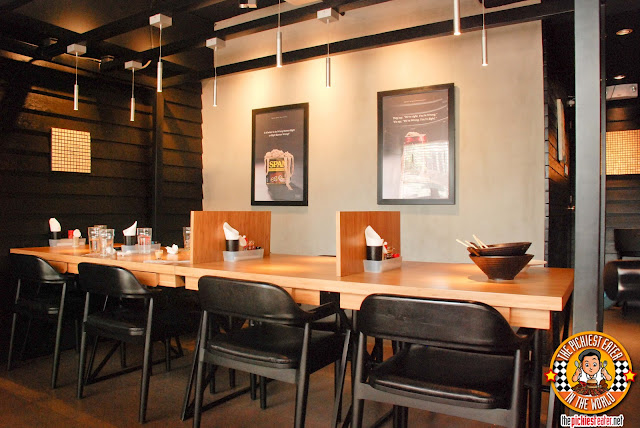 Guess what? They were full. In the ten minutes that they were open, they filled up practically the entire restaurant. I told the restaurant manager, Joy, that I would come back by around 1pm, but if my hunger gets the better of me, I'd just come back some other time.

Burgos Circle has a wide selection of restaurants to choose from, but I couldn't get my mind off the pictures that I saw on the net of Wrong Ramen's Dishes. Something kept telling me that the food would be worth the wait, so I was convinced that I would easily last till 1pm. However, when my sweet little Rina is hungry, she is not one to be trifled with, so convincing her to wait til 1pm was the trickier part. (Good thing I distracted her by reminding her that we needed to take pix for a little project I'll be unveiling in a couple of weeks)

Thankfully, when we got there by 1pm, they had a table waiting for me. 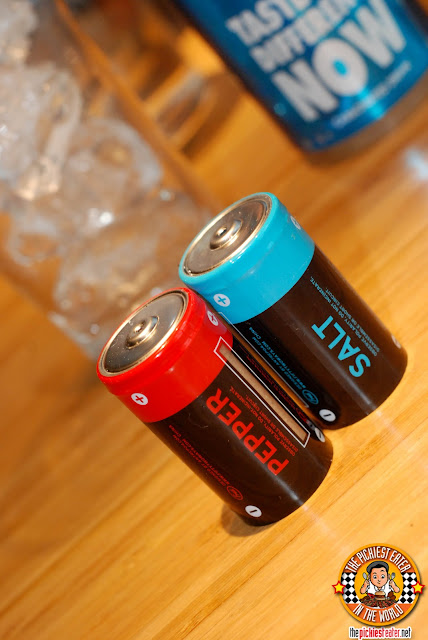 From your first step into Wrong Ramen, one thing was clear - These people don't take themselves too seriously. Which could be why I felt like I would fit right in.

Looking around, everything, from the salt and pepper shakers, to the pictures on the wall that shows ramen noodles in a Starbucks cup, declaring "Right Ramen is made by Japanese Cooks. Wrong Ramen is made by idiots who think they are better than Japanese cooks.".

I was excited to see what these self proclaimed "idiots" had to offer. 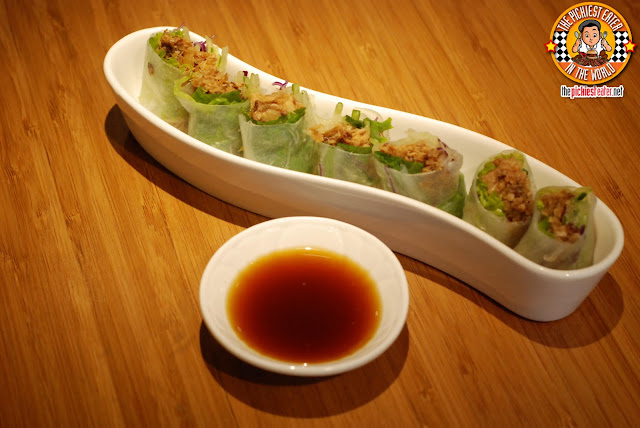 We started off the meal with the Chasu Rice Rolls (P140). Rina actually liked this a lot more than I did. Since the Chasu was shredded, it felt more to me like a fresh veggie roll, but Rina disagreed. She gladly finished the rolls, happily dipping her rice paper wrapped treats into the Ponzu sauce with every bite. 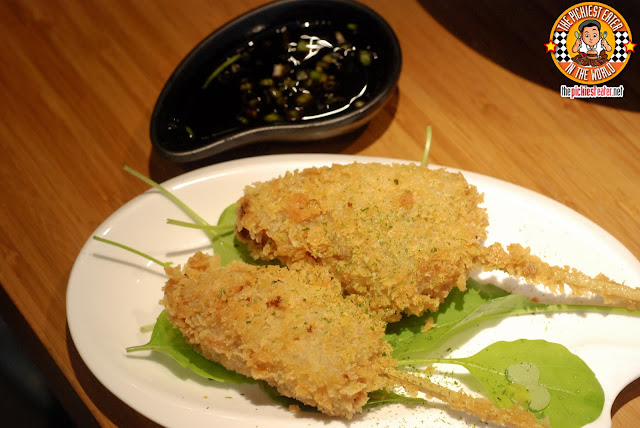 Had I not tried Yabu's Menchi Katsu, there's a good chance I would be doing quadruple backflips over Wrong Ramen's Hamburg Kushikatsu (P180). It was basically the same concept of Menchi Katsu - without the cheese - and in the form of a Kebab. The ground beef enveloped inside the Japanese breadcrumbs maintained a remarkable juiciness to it. We asked for a Soy Ginger dipping sauce to go with it, but in hindsight, I think a cream based dip would have worked better - either Tartar or Curry Mayonnaise (Oh well, there's always next time hehe) 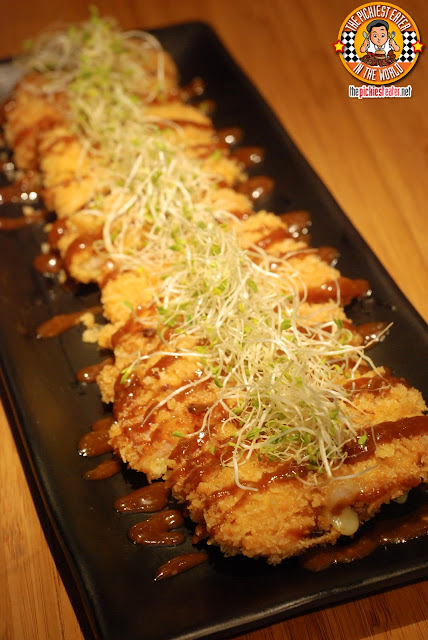 Bacon Katsu (P260). Now this is what I'm talking about. Ordering this was pretty much a no brainer for me. I love me some Katsu, and I love me some bacon. So when you put those two things together, awesomeness shall ensue. Topped with Alfalfa Sprouts (which to me were useless) and drizzled in a sweet wasabi sauce, I almost got thwapped by Rina because I tried to grab a piece before she got a chance to take some pictures (Meaning the second the waiter placed the plate on my table). 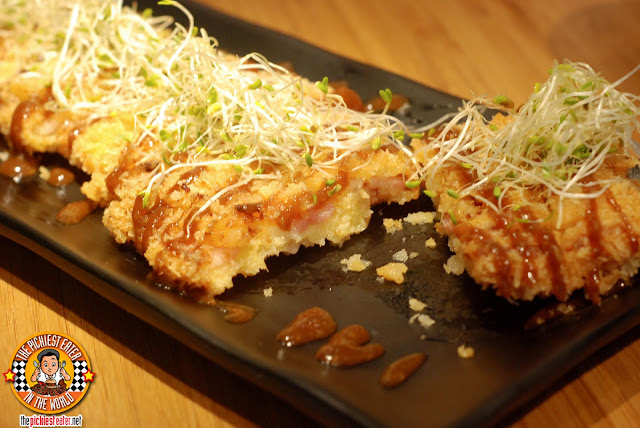 The Bacon Katsu is bacon, coated in Japanese breadcrumbs and deep fried. Oh and another thing. It's got a layer of cheese in between. The smokiness of the bacon mixes well with the creaminess of the cheese, and the tanginess of the sweet wasabi adds a nice contrast of flavorI really enjoyed this, but my comment would be.. Maybe they could add more bacon? hehe 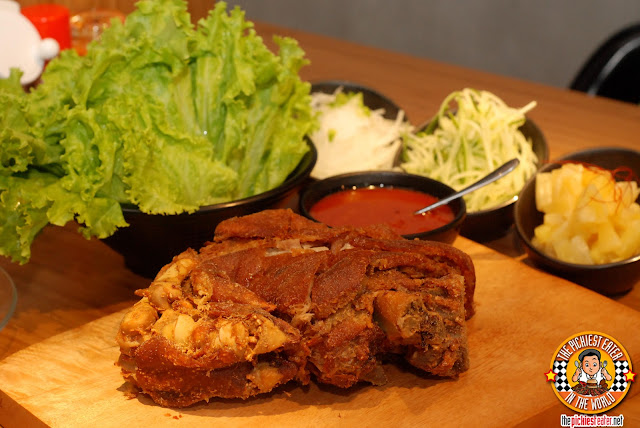 Truthfully, the last thing I expected to feast on in Wrong Ramen was Crispy Pata, but the Crispy Pata Ssam (P980) was just a tad but too tempting to pass up. The succulent pata was placed down on the table in a wooden slab, with a whole bunch of sides- Shredded onions, shredded cucumbers, pineapple tidbits, leaves of lettuce, and their Ssam Sauce, which kinda reminded me of Sriracha sauce. 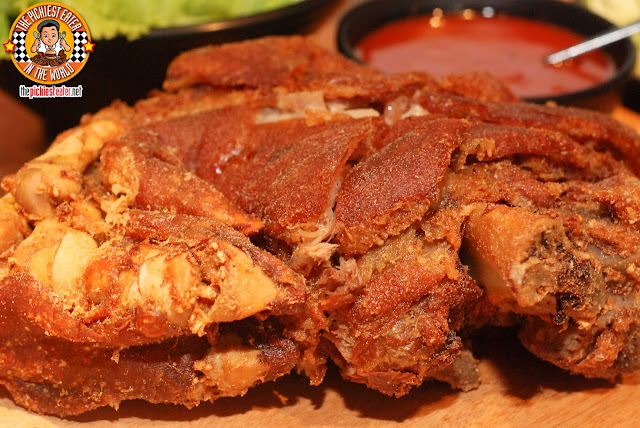 The hunk of pork leg is cooked for five hours, making the meat incredibly tender, yet the skin maintained an astonishing crispiness. Flavor-wise, I initially felt that it could have used a tad bit more seasoning, however, I realized that this wasn't meant to be eaten just as is. 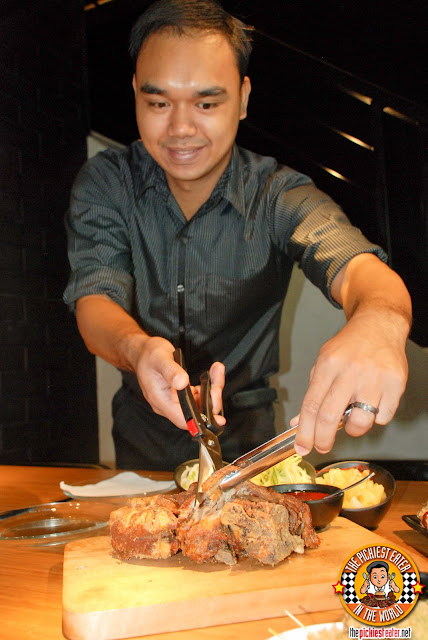 Despite what it may look, this isn't your average ordinary Crispy Pata that you eat with soy sauce and vinegar with minced garlic. After the our nice server graciously chopped up the pata for us... 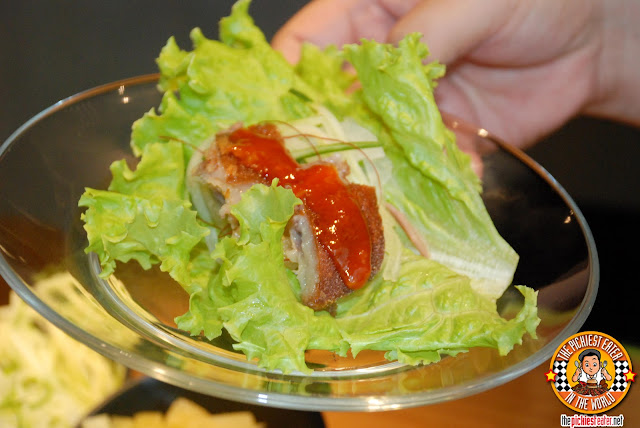 Rina laid out her lettuce and placed the pieces of pata, onion, cucumber and pineapple on it, dabbed a bit of the Ssam sauce and made a "healthy wrap".. umm.. albeit, filled with deep fried fatty pork. With the mixture of flavors brought out by the different components, in a way it 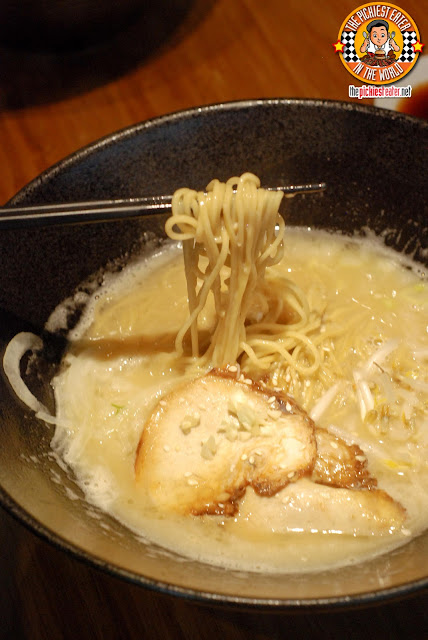 All my questions about where the name "Wrong Ramen" came from were revealed as soon as I gave the Wrong Ramen Rich Tonkotsu (P385) a try. I was warned by a fellow blogger and friend, The Food Alphabet, that the broth was fattier than your average bowl of ramen. And boy, he wasn't kidding. The broth had a thicker, milky texture that I had never tasted before in a ramen. But the savory flavor of pork could not be denied. The Chasu Pork melted in my mouth when I took a bite, and the noodles were firm with a bit of spring to it. 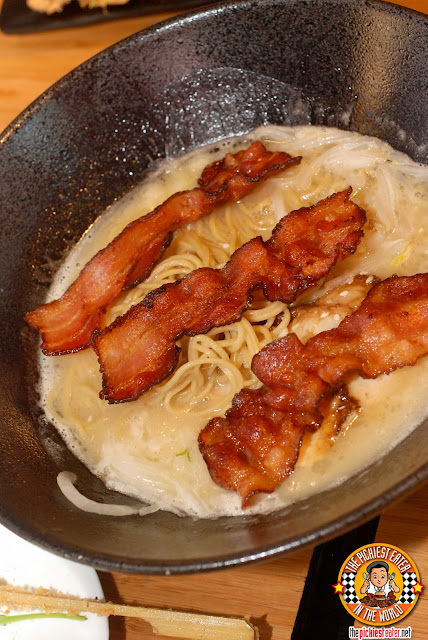 Rina once again proved that there is no other woman more perfect to be my wife than she, when she asked for extra Bacon Strips with our Ramen (Add P90). Many would find this too indulgent, too fatty, or too much. Others may find it just plain WRONG.

If you do a such on Wrong Ramen on the net, you're going to hear a lot of people say something to effect that, "How could something so good be so right?". The Wrong Ramen Rich Tonkotsu is the perfect embodiment of that statement,
Truthfully, I would have no problem ordering this again, however I definitely wouldn't advise eating it on consecutive days. 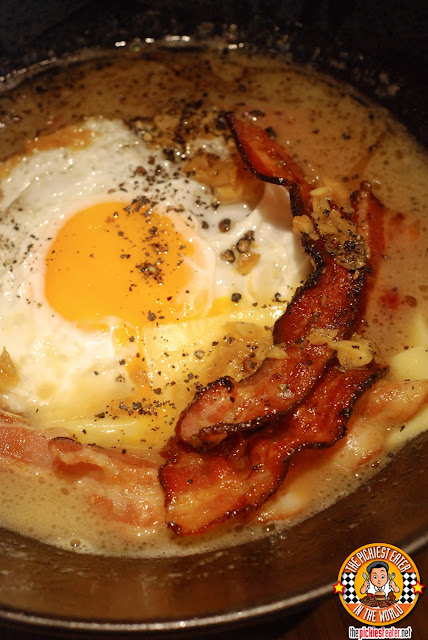 What happens when you takes breakfast favorites, namely Bacon, eggs, cheese and Black Pepper Spam, then throw it into a bowl of steaming hot broth with a garlicky kick? You get the F.U. Ramen (P425), the most insane bowl of Ramen you'll ever find in the metro.

If, by some reason, I was required to make someone a bowl of Ramen,  I think the result would pretty much look like this. Aptly dubbed in the menu as "Your Breakfast in Liquid Form", The F.U. Ramen really is a sight to behold.. Depending of course on how you view your Ramen. I can imagine how some would call this a blasphemy to all things, Ramen, but I found it rather amusing how Wrong Ramen manage to innovate on a classic dish, using modern ingredients.

Personally, I enjoyed the dish, but I'm a huge fan of bacon and spam, and other junk food, so that's understandable. 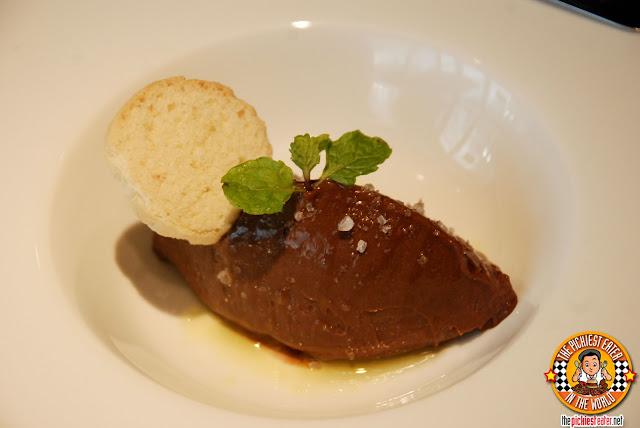 Rina at first, (before I told her what it was) was a bit reluctant to try the dessert called "The Poop Of The Gods" (P130), although I was confident she was going to love it. You wouldn't think that a glob of Belgian Chocolate, peppered with Sea Salt and laying in a shallow pool of Olive Oil would taste any good, right?

But it was exceptional. You see, Rina is a huge fan of sweets that are "Salted", so this for dessert was a no-brainer. Once the flavor of the sea salt on the chocolate became more prominent with every bite, she actually comandeered both spoons and started eating the dish with two hands, in rapid succession. I swear it was like watching a video game (She later declared that since she gave me her leftover bacon, we could now call it even). 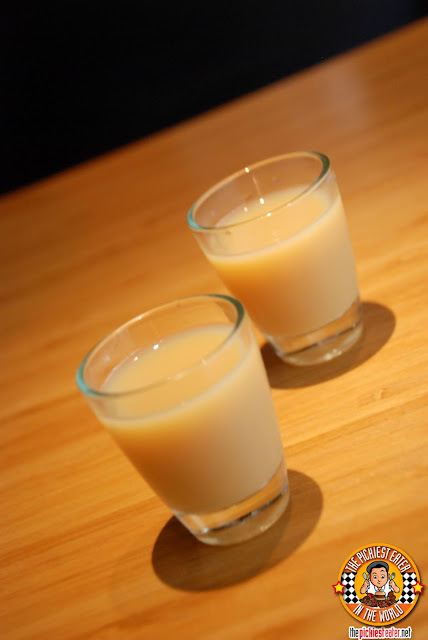 We ended our meal with a shot of Calpis each, which essentially tasted like Yakult. I'm not exactly sure, but I think this was to help all the oil digest, and leave the body or something like that. (As if I needed help in that department) 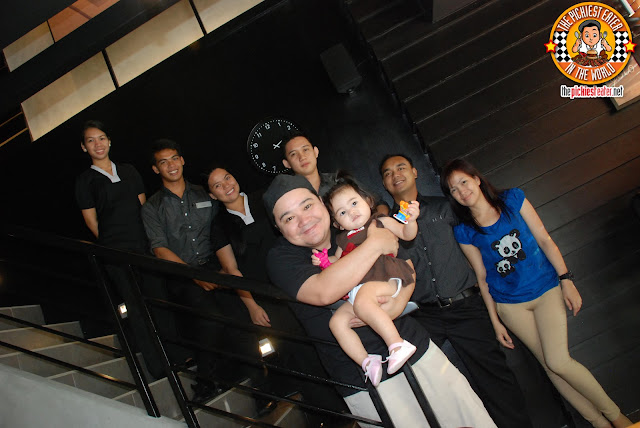 Baby Rain and I with the Wrong Ramen crew


Did I enjoy my trip to Wrong Ramen? Very much so. However if you are a Ramen purist, I would strongly suggest you go to Wrong Ramen with an open mind, otherwise you'll be sorely disappointed.

If you want to eat at Wrong Ramen, I must warn you now: This isn't a place for health buffs. This is a restaurant where you loosen up your belt buckle and tell your diet to screw himself. I kinda see Wrong Ramen as the Zark's Burgers of the Ramen world.. A place where they're not afraid to stare the department of health in the face and tell them to stop being so uptight and just enjoy the dish for its flavors and sheer ridiculousness.

Wrong Ramen isn't "real ramen", but if this Ramen is wrong, then I don't EVER want to be right. 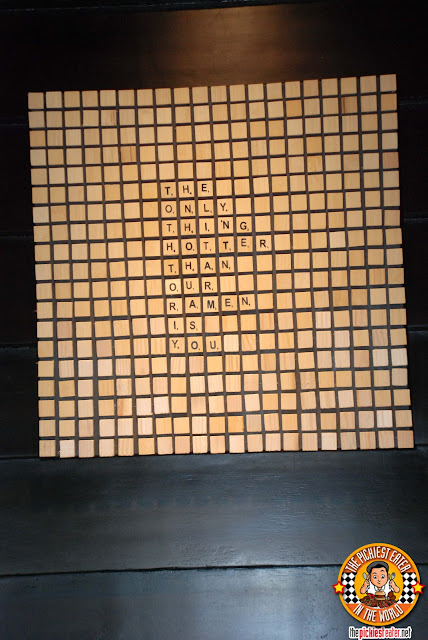 Their Words, Not mine. 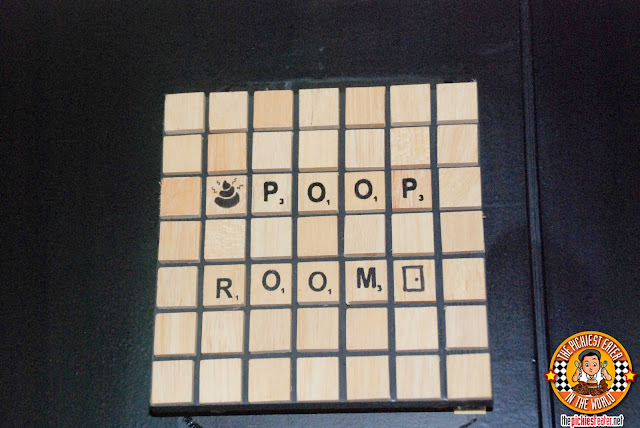 I hope this wasn't where my dessert came from 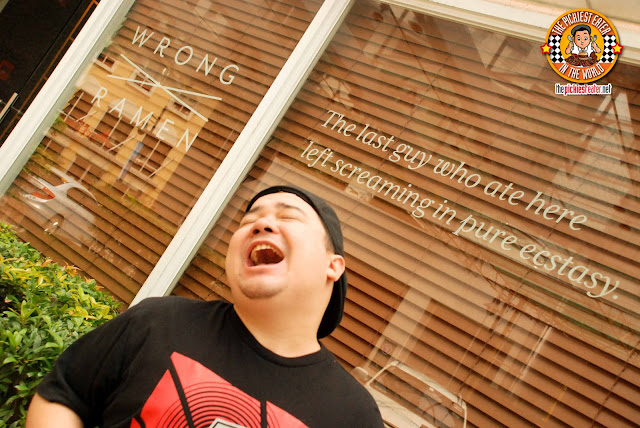 I'm pretty sure they were talking about the guy BEFORE me. 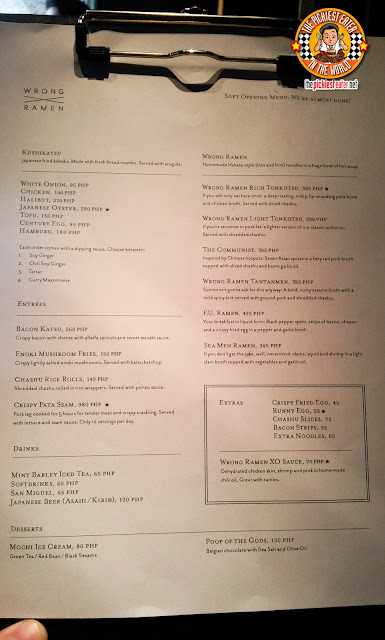 Email ThisBlogThis!Share to TwitterShare to FacebookShare to Pinterest
Labels: at, Bacon, Burgos, Circle, Eat, Fort, Ramen, Taguig, The, to, Where, Wrong