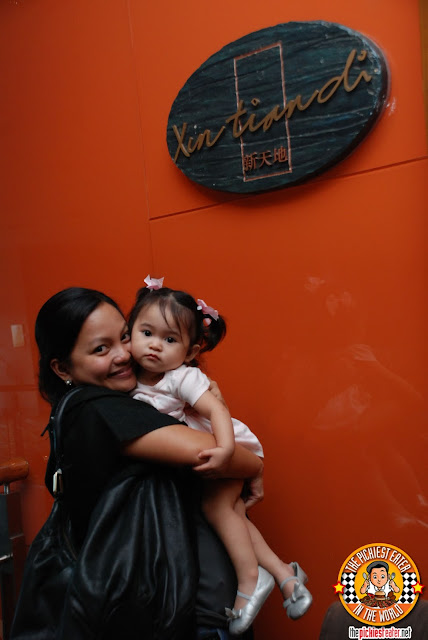 During our amazing Staycation at Crowne Plaza a few months back, Rina and I capped off our epic weekend with a late lunch at the Hotel's resident Chinese Restaurant, Xin Tian Di. Although Rina and I were seriously contemplating ordering a whole bunch of Chinese dishes, the instant we found out that they offered an Eat-All-You-Can Dimsum feast, we dropped our menu and told the restaurant manager (who was kind enough to welcome us to the restaurant), "GIMME SOME OF THAT!" 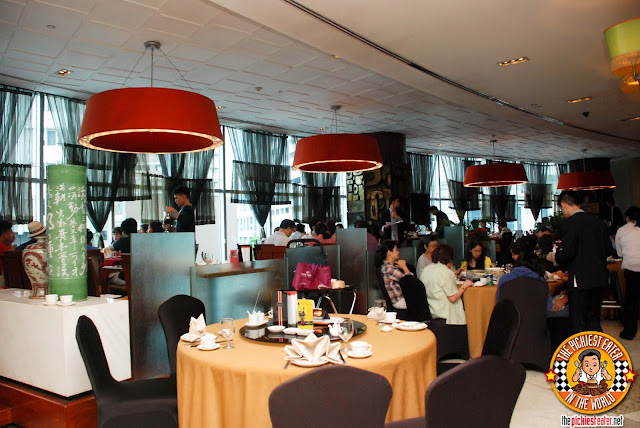 Xin Tian Di reminds me of the classic Chinese restaurants of old. It's grand, and the huge round tables are always filled with families enjoying their quality time together. The Dining area decor invokes the beauty of the orient, in a refined, but not stiff, manner.

Rina and I are suckers for good Dimsum - with a slight difference. Although I'm just as happy making "Pika-Pika" at the food in the steam baskets placed in front of me, Rina, as I had mentioned before, needs rice. 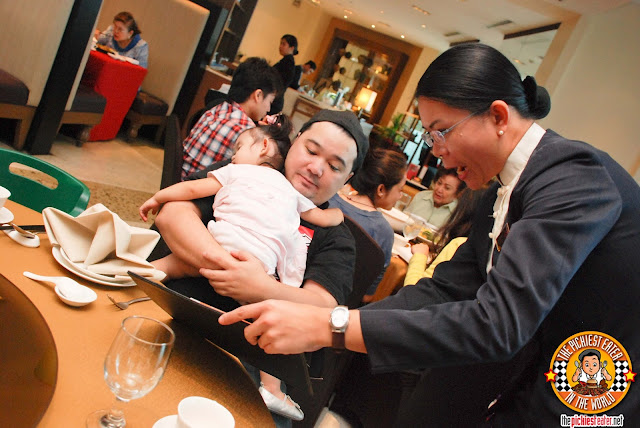 The kind restaurant manager (whose name escapes me at the moment, I'm so sorry), ran me through on how the ordering process would go, and gave me a few of her recommendations as well on what  seemed to be popular with their previous guests.

Throughout this entire lunch, my daughter was asleep in my arms. Normally she only falls asleep when she's being carried by Rina, so there was no way I was going to let her go, even if it meant eating my dimsum while carrying her at the same time. 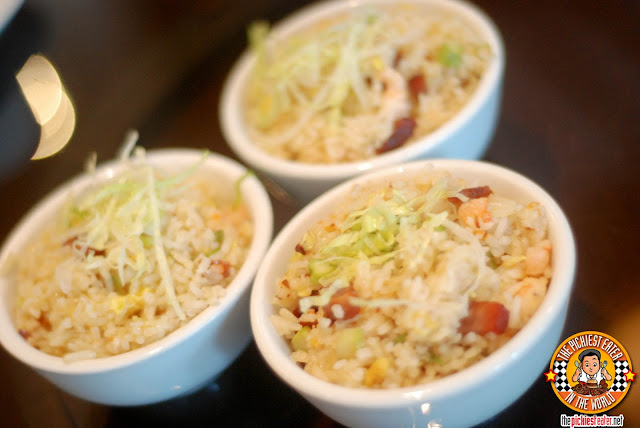 Rina and I are suckers for good Dimsum - with a slight difference. Although I'm just as happy making "Pika-Pika" at the food in the steam baskets placed in front of me, Rina, as I had mentioned before, needs rice. Luckily for Rina, Xin Tian Di offers steam rice with their Dimsum. But luckier for me as well, because they have Yang Chow Fried Rice, whose powers I was helpless against... Those three bowls were actually all mine. I'm kidding. Or am I? 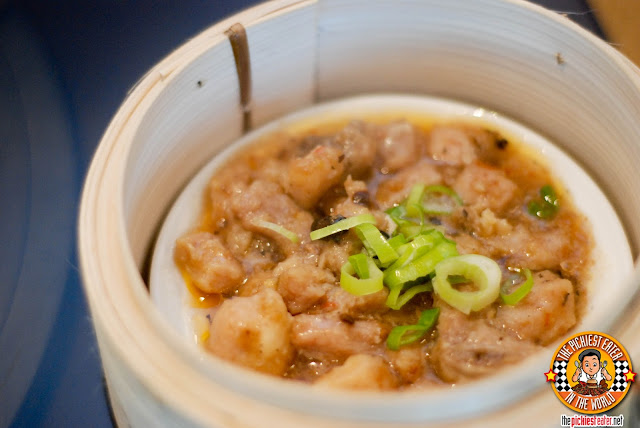 Rina started us off with the Steamed Ribs with X.O. Sauce, which was very reminiscent of Rina's favorite, Spare Ribs with Tausi. I loved the steamed chunks of pork rib with bits of fat clinging to it, laying in a steam bath of X.O. sauce.. whatever that may be. 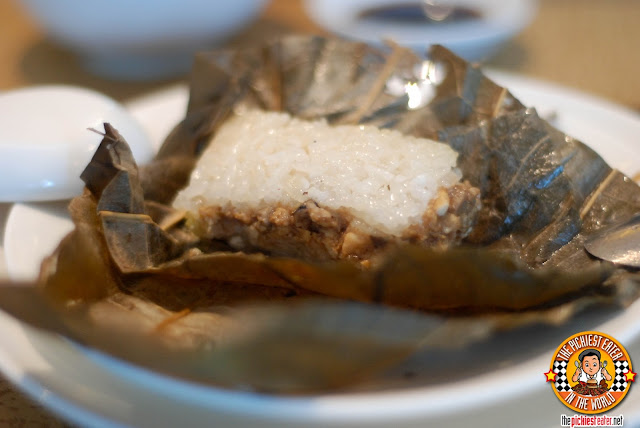 Among the steamed items, the one I didn't enjoy was the Steamed Gelatinous Rice Dumpling stuffed with Duck Meat, Mushrooms, and Egg Yolk, wrapped in a Lotus Leaf. I don' know how else to describe it, except it was a little odd. 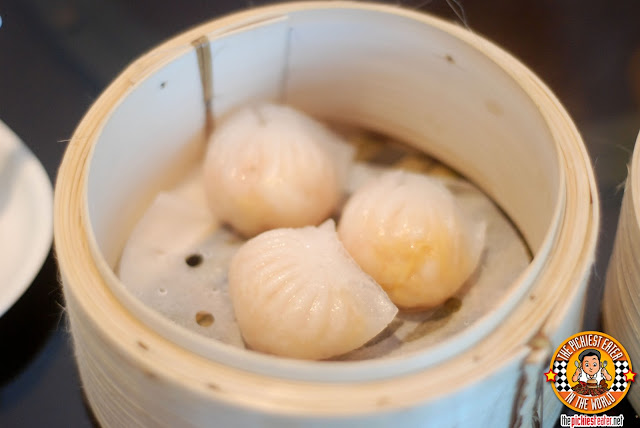 Whenever we eat at a Chinese restaurant, it is mandatory that we order the Steamed Crystal Prawns.. Aka "Ha Kao". Rina enjoyed Xin Tian Di's version, as it was plump and extremely fresh. I'm not a shrimp guy, so she had this all for herself hehe 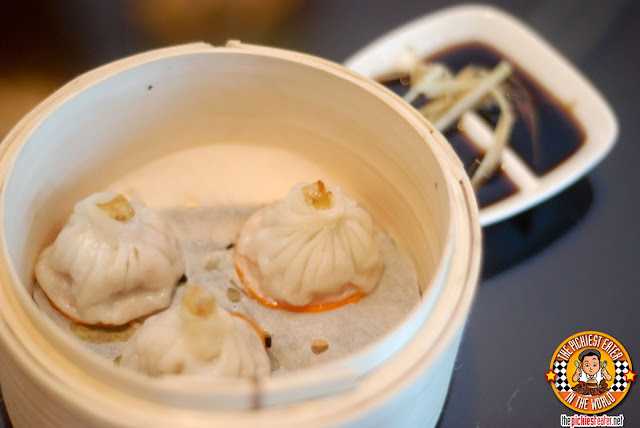 Rina saw that Xin Tian Di had Steamed "Xiao Long Pao" Shanghai Style on their dimsum menu, so it was one of the first thing she asked for. The Dumpling had a delicious broth wrapped within it, complimenting the ground meat inside. 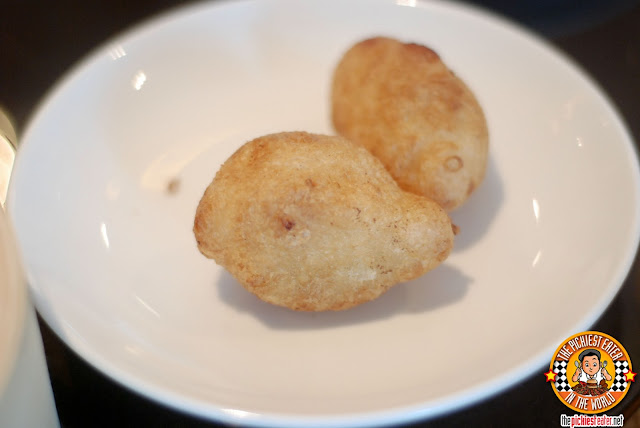 I'm a fry guy through and through, so I was more interested in their fried dimsum, especially the Glutinous Pork Puff.. Aka "Ham Soy Kok". This was pretty awesome. It had a crunchy exterior that revealed an amazing pork mixture inside. I could have eaten a dozen of these bad boys! 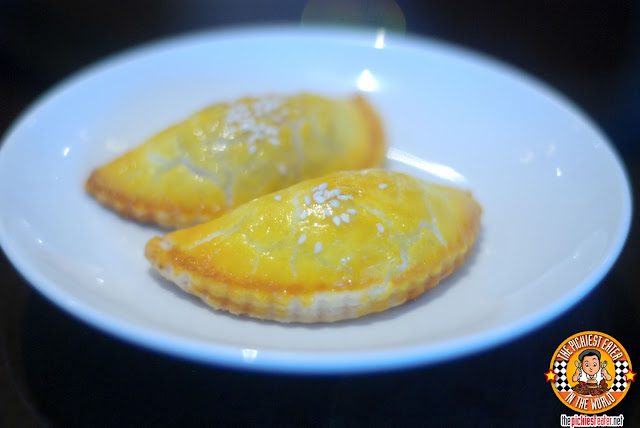 My next target was the Baked Barbeque Pork Stuffed with Apple aka Asado Pie. The pie crust was baked nicely, with the edges giving off a slightly darker hue, not to mention it was buttery and quite flakey. 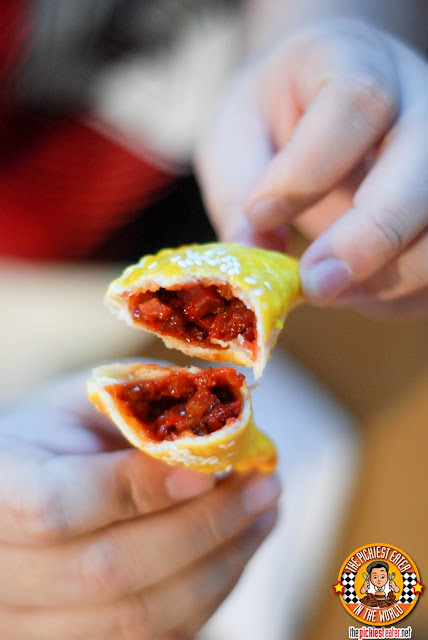 Inside the pie was minced BBQ Pork, done the Chinese way, mixed with a bit of apple bits to give the pie a hint of sweetness. 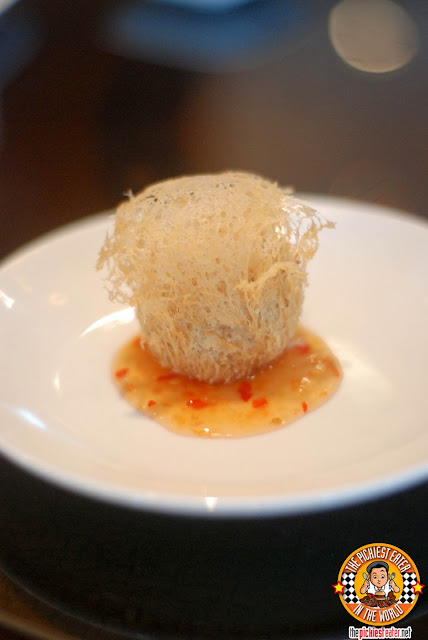 Rina dared me to order something from the Vegetarian menu, so I ordered the Deep Fried Taro Puff. Presentation-wise, it was nice to look at since the crisps were pulled to an elegant design, as it laid on a bed of sweet chili sauce., Taste-wise, it was actually quite good. The "Puff" was fried to a nice crunch, and they didn't scrimp on the taro filling.

My only qualm was that I was that the sweet chili sauce. Though it was aesthetically pleasing, there are some people (like me) that don't care for it very much. It would have been better off had they put the sauce on the side for Picky Eaters such as myself. 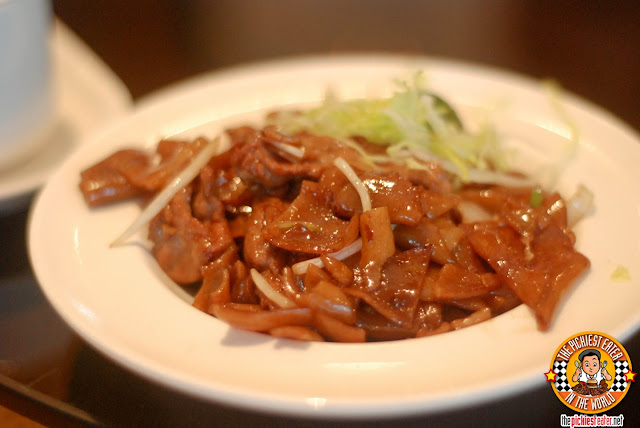 I really enjoyed the Dry Fried Flat Rice Noodles with Beef. The noodles had a firmness to it, yet yielded a delicate tenderness when bitten through. It was sticky, with every inch of the noodle coated in the oriental sauce, and the chunks of beef adding a savory touch to the dish. 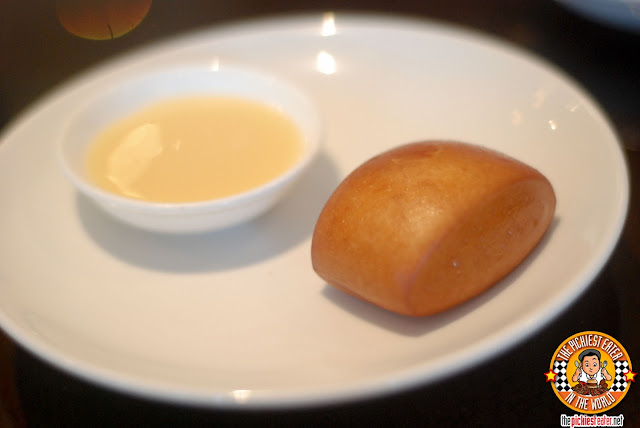 The Deep Fried Bun, on the other hand wasn't anything to rave about. The bun had a decent, crisp exterior, but when bitten into, was a tad dry, and a a bit hard. I suspect it would have been better if the bun was a little thinner, so it wouldn't come off as too dry. Although I had to admit, the combo of the bun with the condensed milk had the potential to be highly addicting. 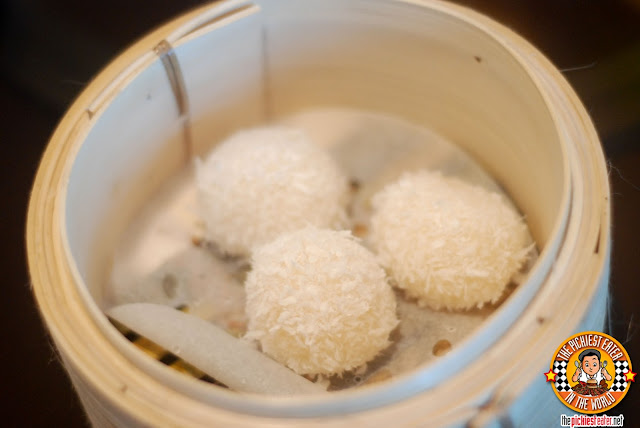 I noticed i'm not a fan of dishes with dessicated coconut or anything with similar textures, and Xin Tian Di's Sweet Egg Custard reaffirmed that. I personally wouldn't recommend this. 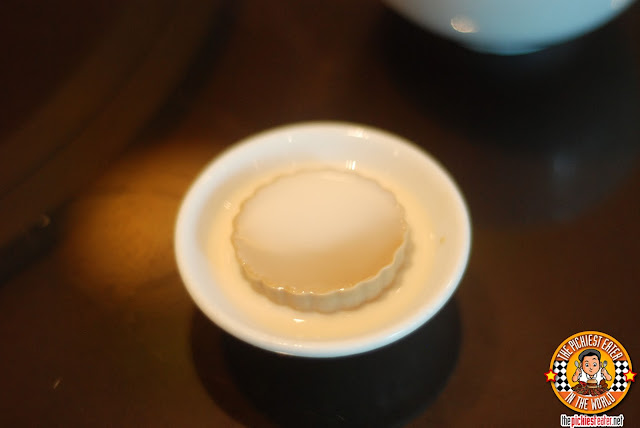 Rina loves coffee, so I wasn't surprised that she liked the coffee pudding. The pudding itself had the bitterness of coffee that was subdued by the thin milk bath that it was drenched in. 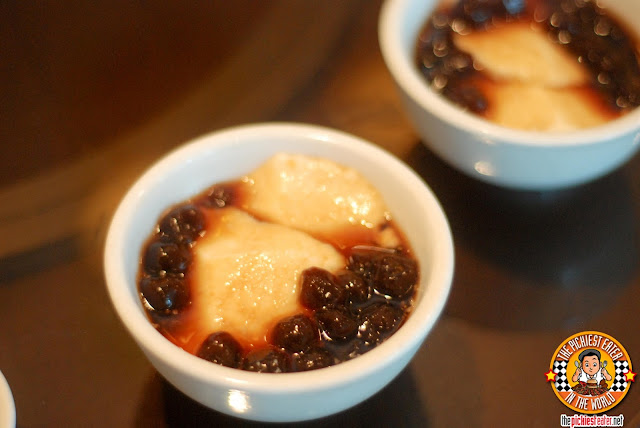 For me, the Taho with Black Pearls hit the right spots with my palette. The subtle hint of soy flavor was brought to life by the thin, sweet, syrup that was peppered with black pearls. 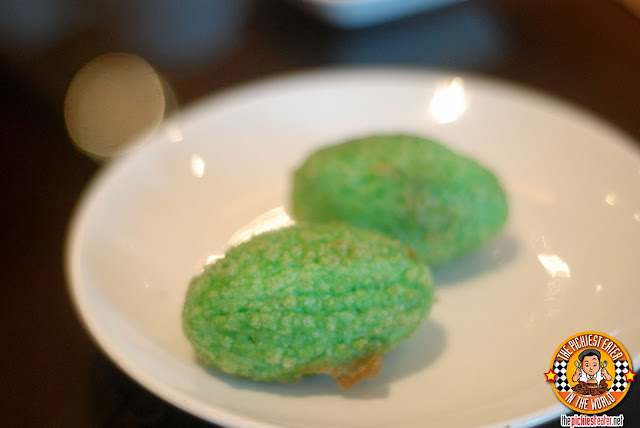 The most intriguing of Xin Tian Di's desserts was definitely the Ampalaya Buchi. I won't lie to you.. When the manager offered me "Ampalaya Buchi" for dessert, I responded with a quick "No Thanks". Buchi stuffed with Ampalaya? I'd be hard pressed to think of something more disgusting than that.

Clearly used to getting that response, the manager laughed and explained that the dessert was only so named because of its resemblance to the dreaded vegetable. 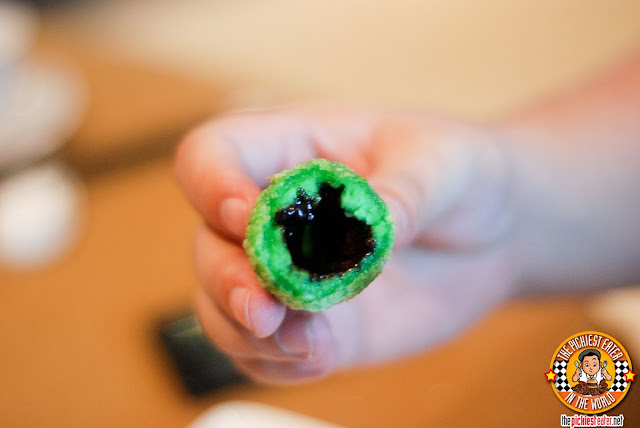 One bite into its crisp shell, I was forced to eat my words. Rina went absolutely ballistic. It was revealed that the "Ampalaya Buchi" was actually filled with melted Dark Belgian Chocolate. It was a delightful way to cap off an amazing meal. 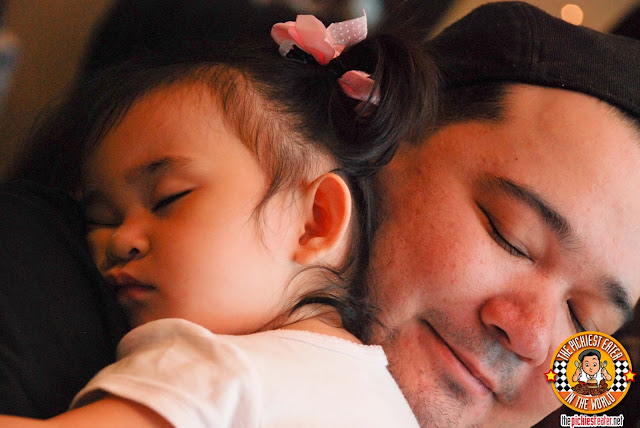 Daddy ate so much, by the end of the meal, he needed a nap as well.

Thank you again, Crowne Plaza for a phenomenal meal! Rina and I can't wait to take her dad for a second round! 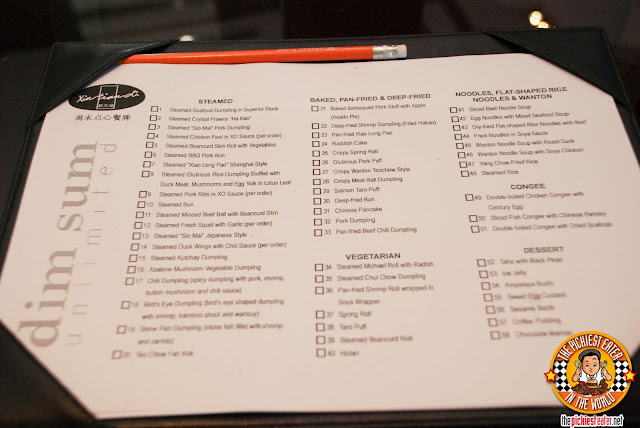 Email ThisBlogThis!Share to TwitterShare to FacebookShare to Pinterest
Labels: Chinese, Crowne Plaza Manila Galleria Hotel, Hotel, Hotels in Ortigas, Hotels In The Philippines, Where to Eat at Ortigas, where to eat in Pasig