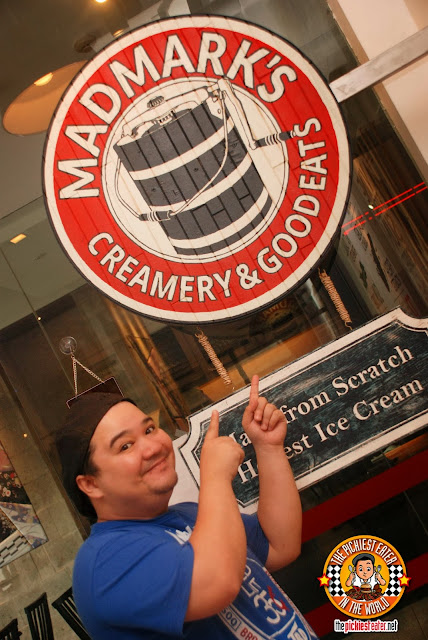 My first visit to Mad Mark's was a memorable one. You throw in a Beef and Chicken Sandwich in front of me the size of a battleship, and yes, that will definitely leave a mark in my memory for ages to come. Although the first branch had a cool, hole-in-the-wall vibe to it, the popularity of Mad Mark's food made it impossible for their progress to remain stagnant. Considering its fan base, it was only a matter of time that Mad Mark's would expand, and go to a more mainstream venue.
Sometime in October, the inevitable happened.. Mad Mark's opened their second branch at Glorietta 5 in Makati. I always knew that they would go mainstream, but I didn't think they would go THAT mainstream hehe.

The first thing that fans of Mad Mark's Kapitolyo will notice, and will definitely put a smile on their faces, is how much larger their dining area was. It's quite spacious and there's even an Al Fresco area for smokers. 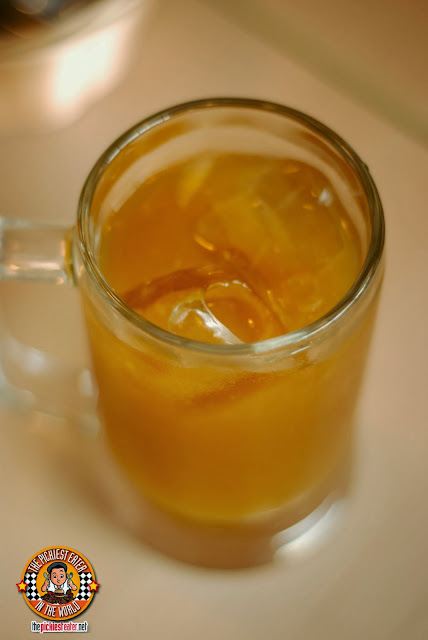 One thing that I found out about Mad Mark's is that their Ice Tea is absolutely delicious. In a world where fruits such as Lemon, Raspberry and strawberry make the rounds as the possible flavors for Iced Tea, I don't understand why Calamansi isn't used as often. Mad Mark's Homebrewed Iced Tea is genuinely refreshing, as it hits the right notes of sweetness, balanced beautifully with the subtle citric touches that compelled me to demand the waitress to leave the pitcher on the table, after promising Rina I'd adhere to my self imposed diet by only having one glass (I believed, "But calamansi is a fruit, so it's healthy!" was my arguement hehe). 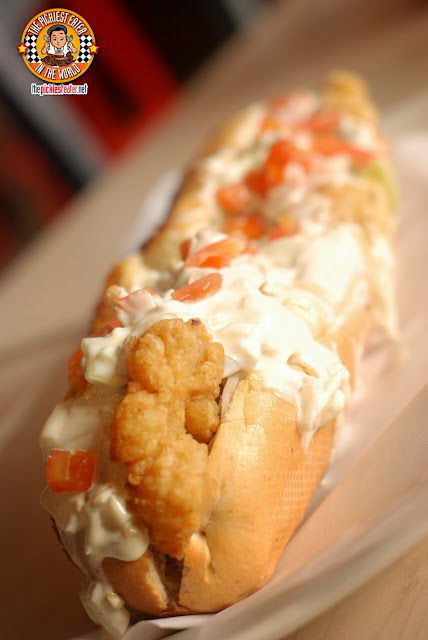 The first thing that attracted me to Mad Mark's, were their Man Sandwiches, so I felt my latest visit there would not be complete without trying another one. Since I already had the Man Sandwich the last time, not to mention I was planning on trying some other dishes, I was glad to go a bit lighter, and try "The Mariner".

Make no mistake about it though - The Mariner is still a massive fish fillet sandwich, slathered in the creamy Mariner sauce and perched between Mad Mark's delicious Dutch Crunch Roll. The bread is one of the reasons why this sandwich stands out, as its softness rivals that of the white fish encrusted in its light breadcrumb coating. I had to pick the tomatoes out though.. just to be sure.. (Hyper Acidic, sorry). 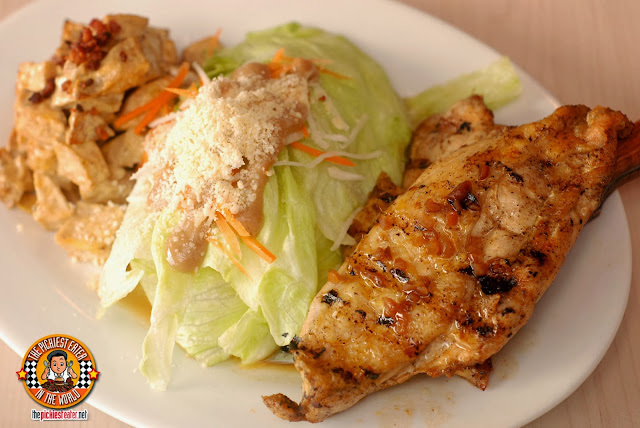 For me, a chicken dish that uses the breast part.. Isn't a good start. I really don't like white meat, as I find it tends to get dry quickly. The Creole Grilled Chicken (P195) of Mad Mark's, however was an exception. This was grilled well enough, to make the char marks evident, yet the chicken meat was remarkably tender and moist. The chicken was basted in a Creole marinade, that had a swirling flavor of herbs, to go with a light touch of heat.

This is something I would definitely order if I was on a diet. You can order it with a side of rice or smashed potatoes, but either way it comes with a side salad. 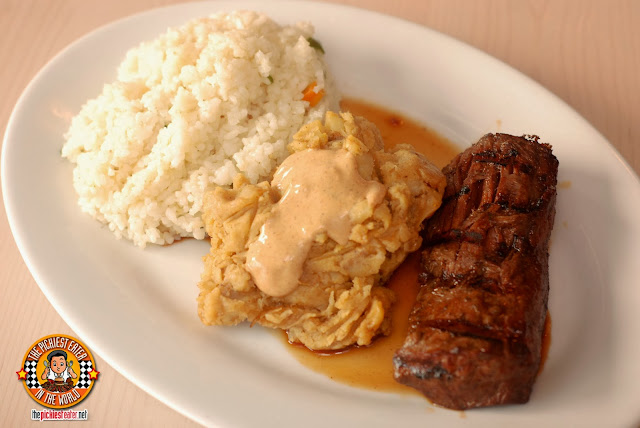 Another dish we tried, was Mad Mark's Signature Steak (Healthy - (150g) P225/ Regular (220g): P285/ Feast (300g): P395). I've always found Striploin to be a rather odd cut, and up to now, I'm curious with why Mad Mark's seems to be so fascinated with it. Not for anything, but I like my steak with a bit of fat to it. But the quality of the USDA Angus beef was undeniable, and the sauce that was proudly made from scratch in Mad Mark's kitchen complimented it perfectly.

This was quite good, and I wouldn't hesitate eating it again, but I go back to my earlier statement that I would have preferred a cut with a bit more fat. 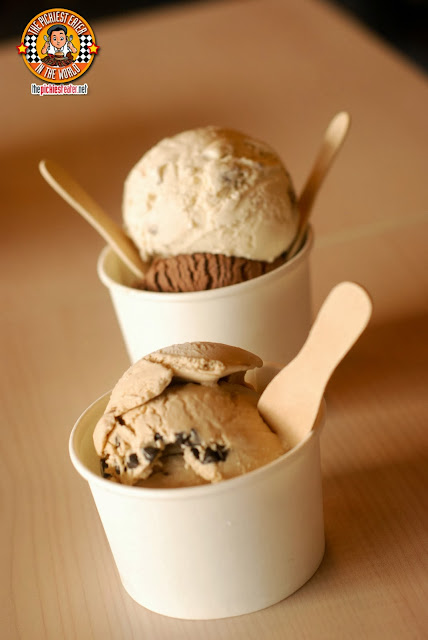 Another one of Mad Mark's claim to fame, is their ice creams. You can start off with their Half Baked Madagascar, which is delightfully creamy and speckled with chunky bits of cookie dough.

Chocolate lovers can opt for the Javan Hot Chocolate. I'm not too fond of dark chocolate, which is why I was happy that this doesn't get too bitter, and maintains a sweet, albeit light creaminess.

My favorites are the Banana.. and the BanOREO! 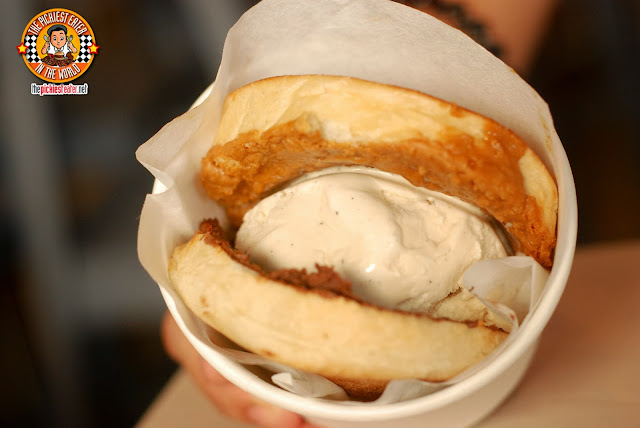 The latest dessert creation of Mad Mark's is the Rolling Dutchman (P150). This is something that puts the "Mad" in "Mad Mark's". You take two English Muffins, smear one end with Nutella, and smear another end with Cookie butter, and put a scoop of Half Baked Madagascar in it!

The dude King Leonidas kicked before he said his iconic line said it best... "THIS IS MADNESS!" A delicious treat no doubt, but maybe a little messy to eat. But then again, thats part of the fun! I would like to see Mad Mark's try a Belgian Waffle option in the future!

On a separate occasion, I was able to try the St. Louis Prime Grilled Ribs and it is definitely what I would recommend to try! Unfortunately we didn't bring a camera (Yes, we go out to eat without a camera once in awhile hehe)

On the whole though, I'm glad to see Mad Mark's Creamery and Good Eats expanding, and like all newly opened businesses, you can expect a few birth pains here and there, especially with service. However, at the end of the day, it's all about the taste of the food, and Mad Mark's is fantastic.

Posted by The Pickiest Eater at 12:13 AM