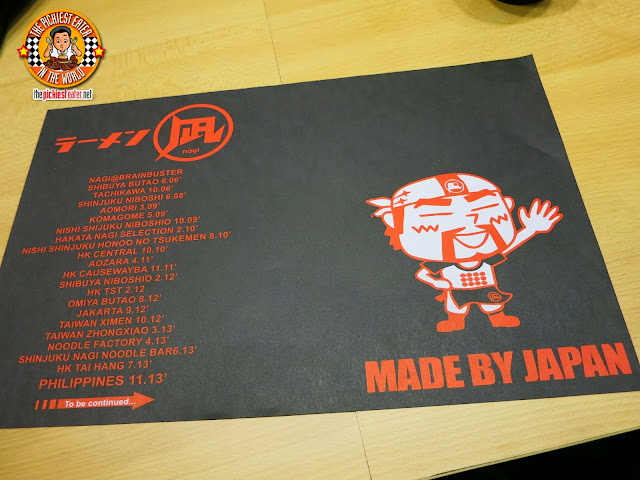 I'm not gonna lie to you, I got into the Ramen game rather late. I'm really more of a meat and potatoes kind of guy, so as my foodie friends were talking about the richness of a ramen's broth, the firmness of their noodles and the like, I was wondering why people were going nuts over something that you can buy at the grocery by the pack.

Naturally, as my food blogging career went on, so did my education in the art of Ramen, courtesy of my other foodie friends.  A few months ago, I was invited to visit a taste test of the newest Ramen place that would be arriving in our shores. I had the pleasure of tasting some Ramen dishes that were completely out of the ordinary, and anxiously awaited the day that their doors would finally open.

As December came, I got the call I had be waiting for. 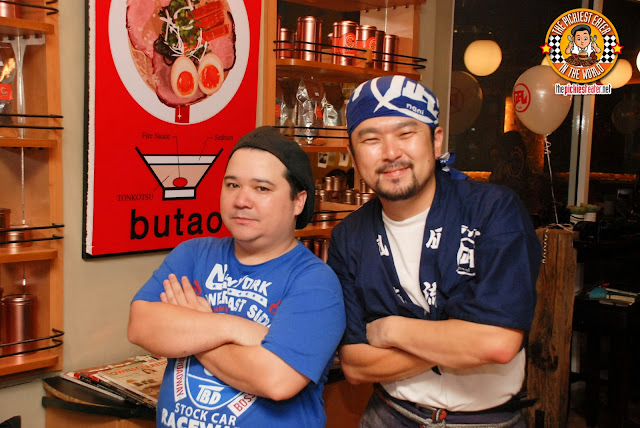 The event was extremely exciting for me, because I got the chance to meet Ramen Nagi's Ramen Master himself, Chef Ikuta. Yep, he's the dude on the logo. Or it's his twin brother. Hehe. But nonetheless, I was sort of expecting a snooty, snobbish, stiff Chef in the mold of the Ramen Nazi of You-know-where, but I was pleasantly surprised to find out that the guy is hilarious! He was game for poses, and even initiated some photo hijinks! 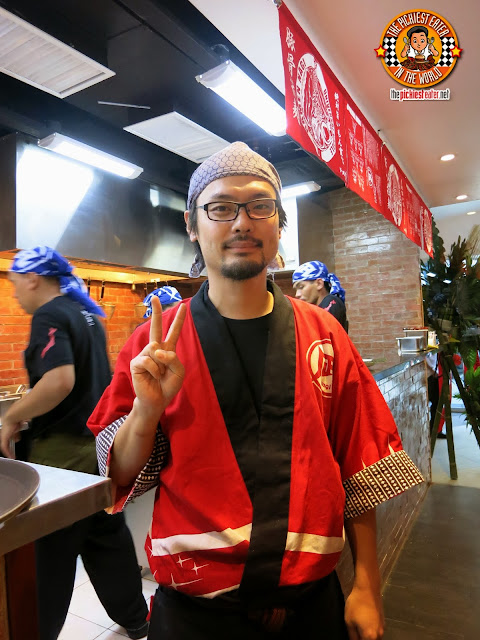 Unfortunately, he was not present during the opening. Instead, another Japanese member of his crew was there as the expediter, doing quality control before dishes leave the kitchen and on to the tables of their customers. 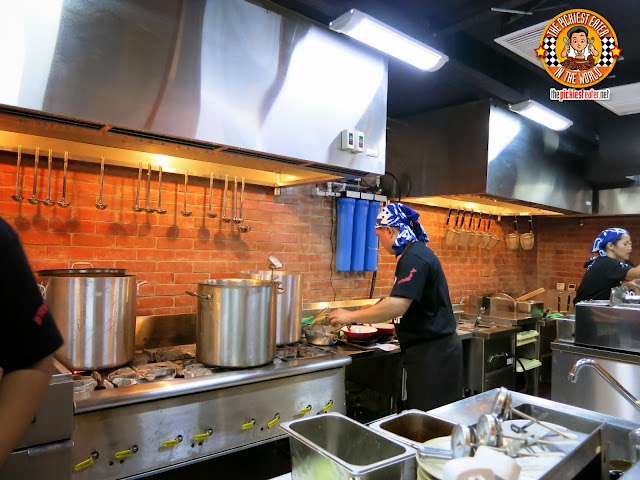 Ramen Nagi features an open kitchen, which keeps the kitchen staff on their toes. Customers are free to watch the staff work together like a well oiled machine as they pushing out their orders. 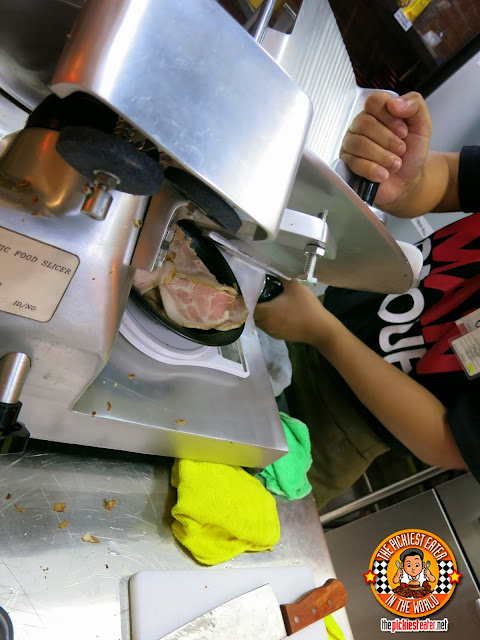 I was particularly entranced with the Pork Cha Sui slicing machine, secretly wishing that I could replace the plate that catches the Cha Siu slices with.. oh I don't know? MY MOUTH? 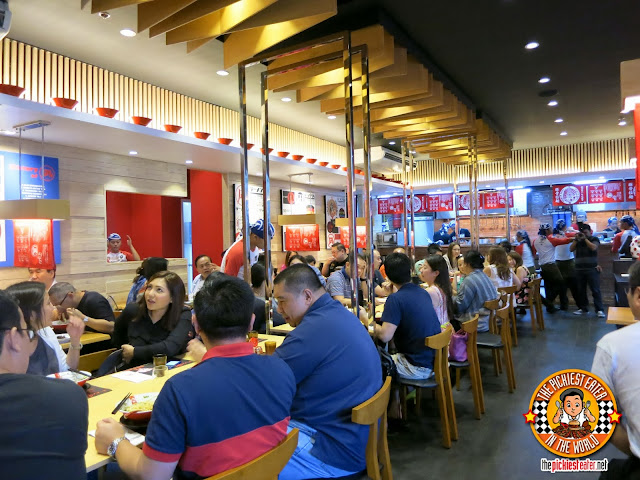 It's clear that Ramen Nagi is expecting to carry on its tradition as one of the most popular Ramen places in Japan and Hong Kong. The dining area, with its Playful, yet modern Japanese vibe has a casual feel, with Long tables being utilized to make the most of its seating capacity. 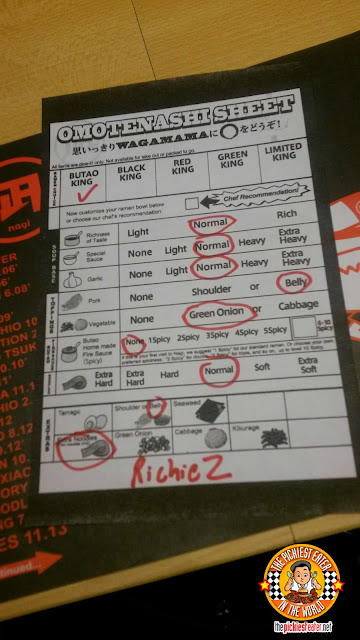 I was a little heartbroken when my favorite during the tasting months prior, the Curry King, was not part of their Philippine Menu. Given that I had my heart set on it for the past few months, I had to improvise, and decided to go with Ramen Nagi's claim to fame, the Butao Ramen. 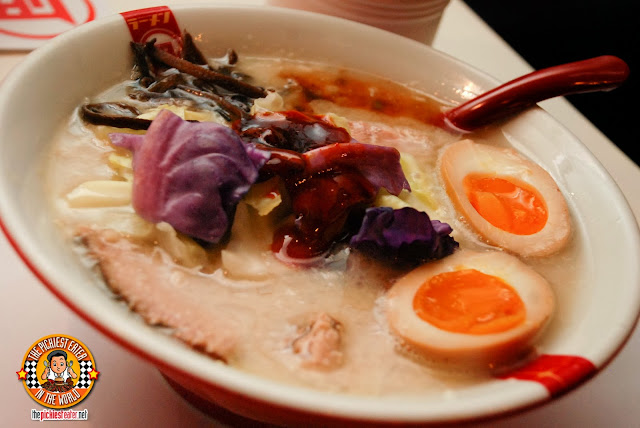 The Butao Ramen (P390) Aka "The Original King", features an incredibly milky, rich broth that will tantalize your taste buds. The broth is very flavorful, and the noodles were incredibly firm, when pulled, but soft to the bite. The noodles were a bit thinner than the Ramen I'm used to, but it actually works better, so it isn't as heavy (But I ordered extra noodles, so consider that purpose defeated). 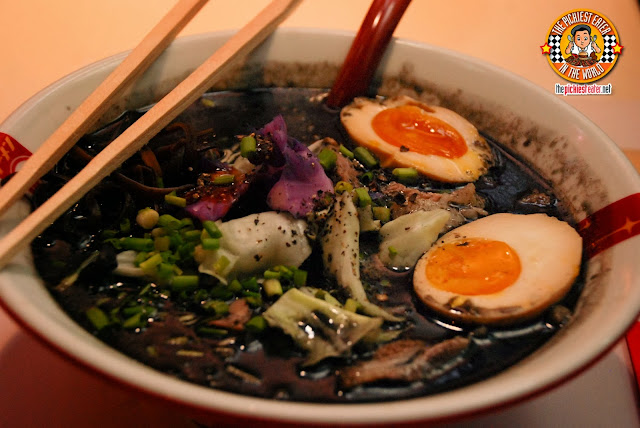 Everyone was raving about the Black King (P410), which is made with chopped squid, squid ink, and loads of garlic. I don't eat Squid, or Squid Ink, so I just took their word for it, regarding its deliciousness. 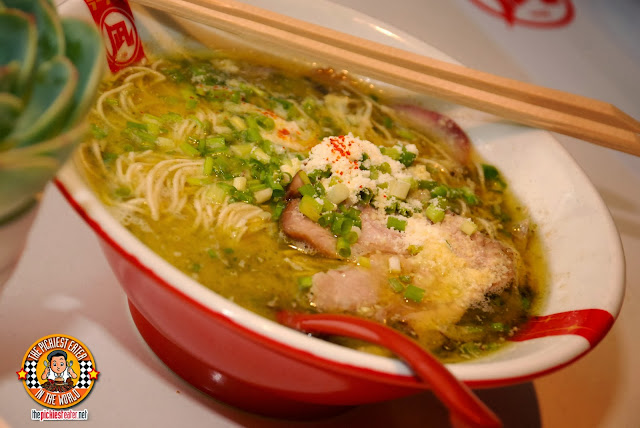 Something you definitely must try when you're at Ramen Nagi, is the Green King (P410).  Close your eyes and think about a pesto based ramen for a second. Sounds amazing, right? Take that fragrant, basil infused broth, add a bit of olive oil for balance, and sprinkle it with finely grated Parmesan cheese. This is Japanese-Italian fusion at its finest. If Marco Polo went to Japan instead of China, I promise you, this would be as popular as spaghetti.

For those of you who are looking for a bit of heat in your tongue, also available, is the Red King (P410), which is the spicy variant. 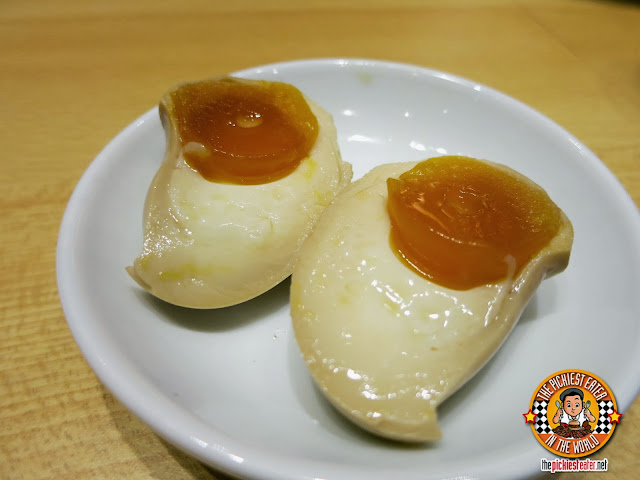 My only two minor qualms during my meal at Ramen Nagi, was I felt that the Tamago (Side order: P50), was slightly overdone... and.. 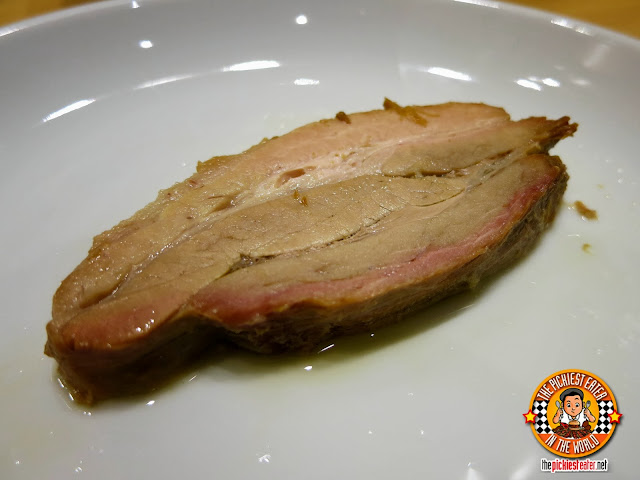 The extra Cha Siu (Side Order: P100) I got, was sliced a bit too thick, and lacked fat (It's pork belly. I need fat.). Flavor-wise, however, both were spot on.

Ramen lovers may also choose to add a sheet of Nori (P40) as a side dish.


Congratulations to the entire team behind Ramen Nagi! This was quite a welcome party you guys threw! Expect me back very soon! 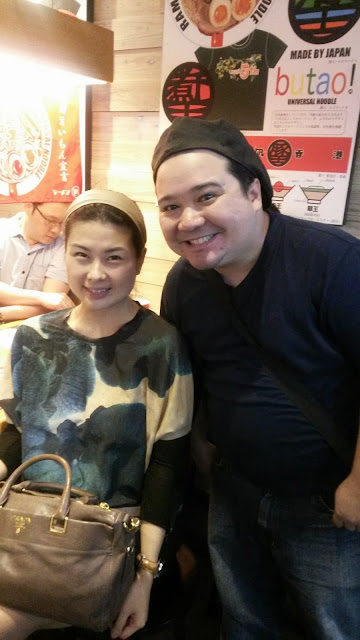 Bumped into one of my favorite bloggers, Jin of Jin Loves To Eat and couldn't resist getting a photo, just to make some of my blogger friends who have a crush on her jealous. (You know who you guys are. One of them is a girl by the way hehe) 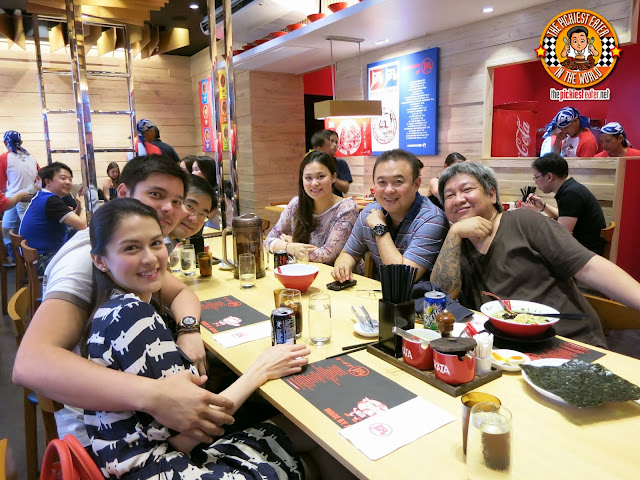 After we had finished stuffing our faces with big bowls of Ramen, my bosses (Sir Don and Direk Erik) and I were joined in our table by lovely couple, Dingdong Dantes and Marian Rivera. I worked with Dingdong Dantes last year with Tiktik, and Marian more recently with "Kung Fu Divas". 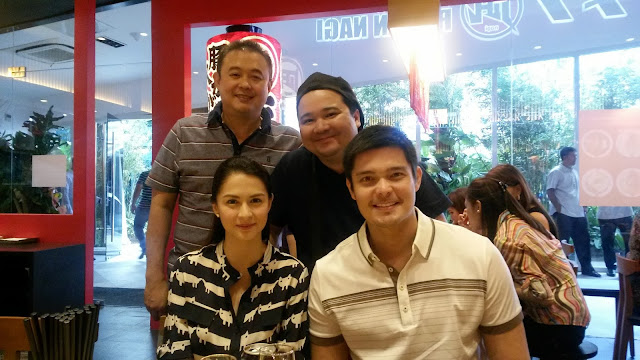 I'm actually glad that I had finished eating by the time Marian and Dingdong arrived, because truth be told, I wouldn't get much eating done if I had to eat with Marian Rivera in front of me. No joke, she is easily one of the most beautiful women I've seen in my entire life. It was sort of like staring at the sun. Can you imagine how difficult it was to keep myself from staring, especially considering her muscular, six-foot-something-boyfriend was right beside her. Thankfully, Dingdong is one of the nicest guys you'll ever meet and is probably used to it by now.

So in case you were wondering, no, I don't think he felt threatened by me. If he did, he did a good job of hiding it.

Despite my Hollywood good looks, hobnobbing with celebrities doesn't exactly happen every day, so I thought this would be a good time to post my very first "Moments" post on my WeChat page!

I made an account on WeChat a couple of months back, but its only now that I've been utilizing it to the fullest! It's a great, cost effective, and efficient way to communicate with Rina, and other friends and family!

Even though I've gotten the hang of the other features for quite some time now, it was only after my trip to Ramen Nagi that I made my first first Moments Post! 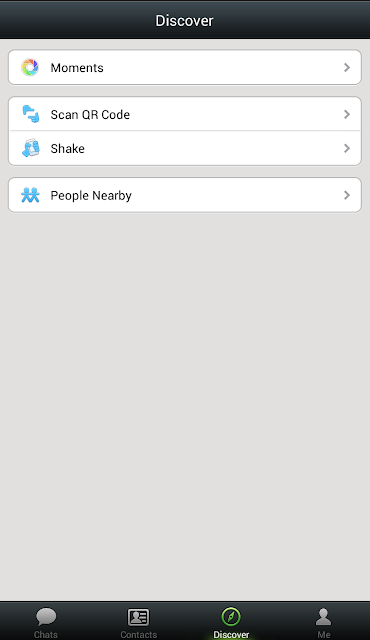 Posting photos on your Moments Wall allows you to share with other WeChat users what you're doing, during a special moment in your life. Simply open your WeChat App on your device, then click on the button at the bottom of the WeChat Page that says "Discover". There you will find the "Moments" option. 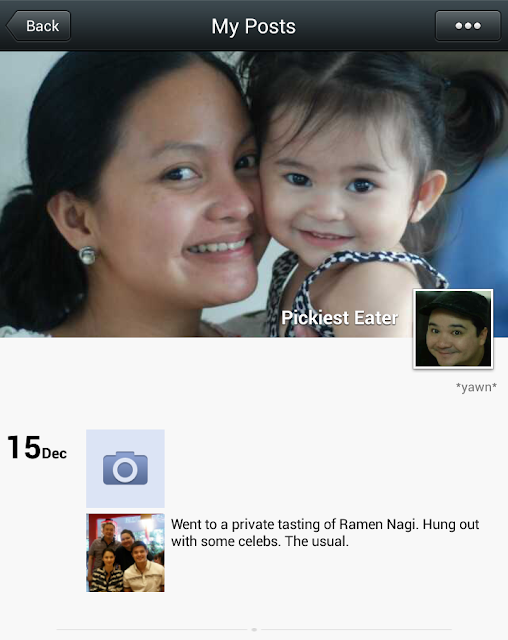 Just look for the camera icon on the top right to select your photo, and you're good to go! Of course, if you don't want your photo to be viewed by the public, you may set the visibility of your post to your selected friends.

For more concise instructions on how to use WeChat Moments, Click HERE 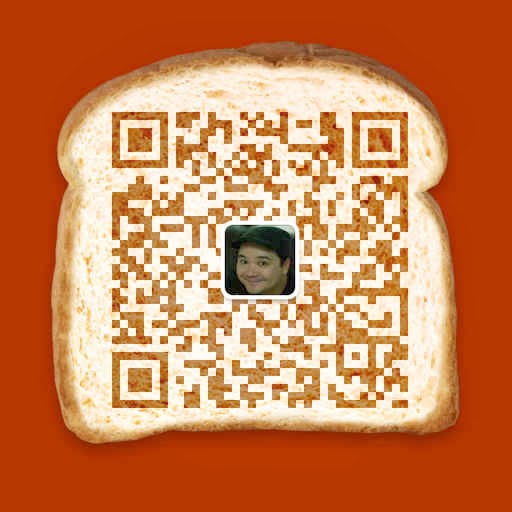 Pretty Cool, huh?? Not bad for my first post! Expect more food and family posts to come on my WeChat Moments, so I hope you follow me on WeChat!
Just scan the QR code to go straight to my account!