CHINA BLUE FOR YOU 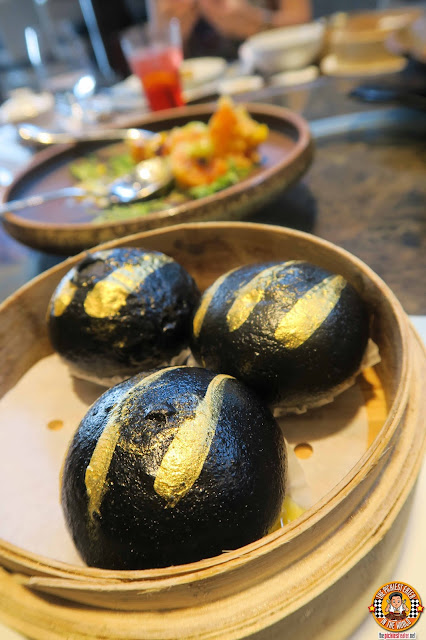 Have you been to Conrad Hotel Manila? Let me tell you, if you haven't been there yet, it's a sight you must definitely behold. Whether it's to use the restroom  or check our the arcade of restaurants they have inside, the place is an architectural wonder that will make you feel proud that such a mighty structure was built in our country by our fellowmen. 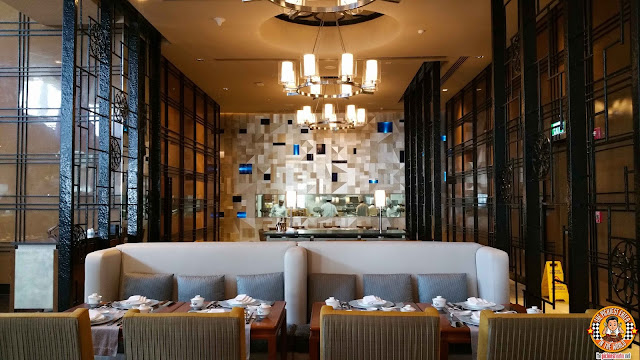 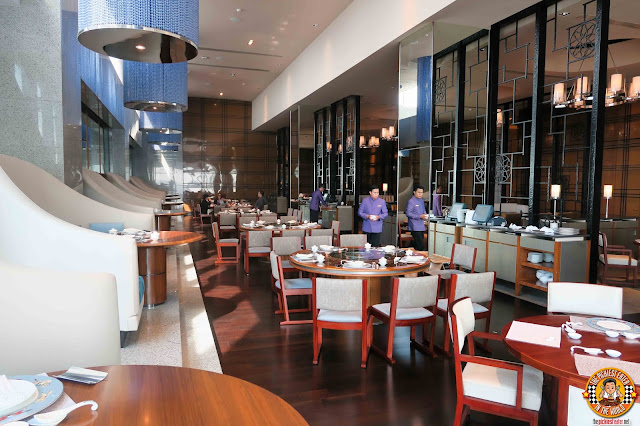 Upon entering the restaurant, it is apparent that the Conrad Hotel Manila group spared no expense in creating a lavish and elegant dining space, that invokes a modern ambiance, without losing the traditional touches of design that the rich culture of China is known for. The interiors sets the tone for what to expect from China Blue's Menu. What I must applaud as well, is how the restaurant doesn't fail in making use of one of it's greatest assets - The spectacular view of Manila Bay, 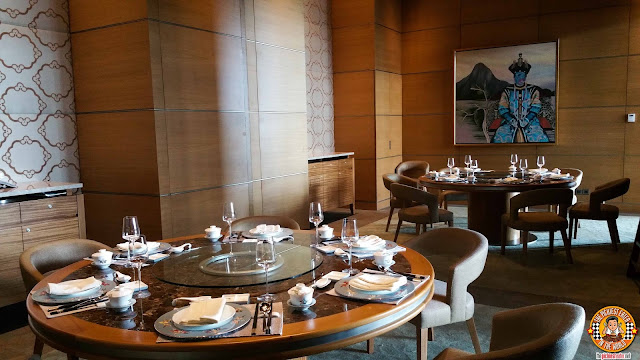 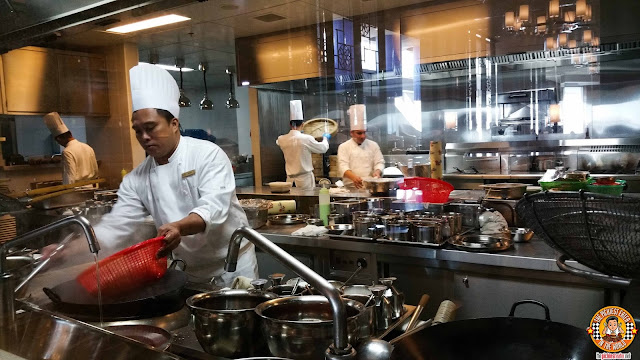 Chef Jeremy Leung is a world renowned culinary master, whose credentials are impeccable. He has also been at the forefront of the movement where traditional Chinese Cuisine meets modern techniques. Chef Jeremy was here for the China Blue launch last July, and make sure that the kitchen and it's staff was running to his high standards. 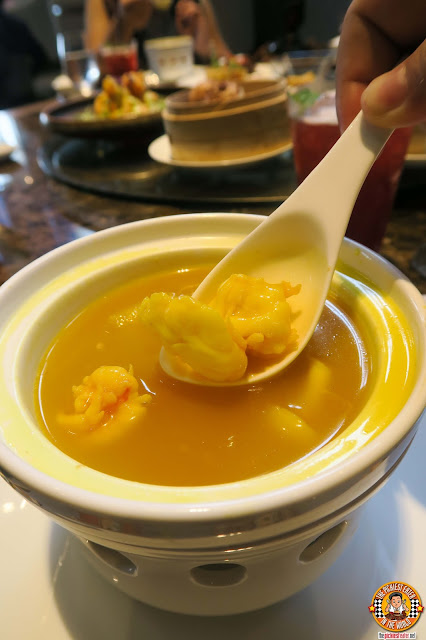 Our meal began with the selected soup, Assorted Seafood in Eight Hour Golden Broth (P450). Although I'm not too big on seafood, I have to hand it to China Blue for giving such generous helpings of minced Shrimp, Squid, and other seafood, ensuring that every scoop you take is filled with some sort of meat to go with your flavorful broth. 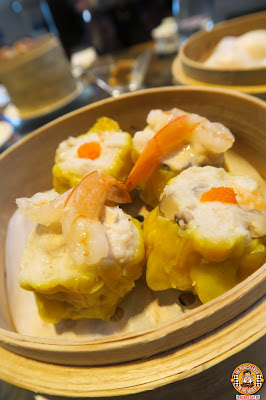 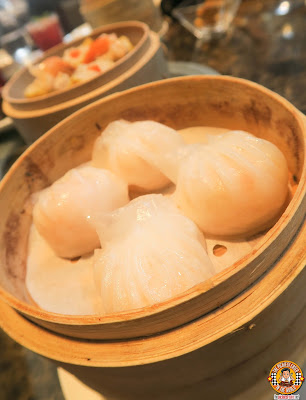 I was really excited to try the Siew Mai (P220) of China Blue, which was absolutely delicious. It was tightly packed with minced pork, stuffed with bits of Tiger Prawn for another dimension of flavor.

Rina's favorite dimsum is Hakaw, and I'm one billion and a half percent sure that she'd enjoy the Har Kaw (P210) of China Blue. These plump Shrimp Dumplings are steamed perfectly, and are also stuffed with Tiger Moss Plant. I didn't try it, but with the way my friends tore into it, I'm willing to bet good money that it was delicious. 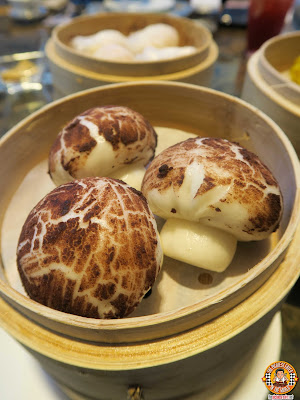 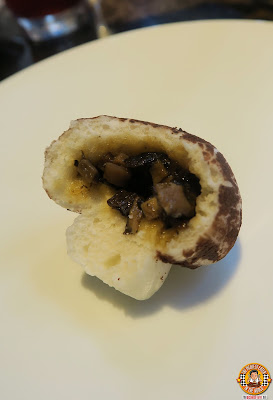 Something you must not miss is the adorable House Specialty Steamed Truffle Mushroom Buns (P260) . Essentially mushroom shaped steamed buns hat are filled with a minced mushrooms that will leave you wanting more. Trust me, this is so more than just a novelty dish.. It's amazing. 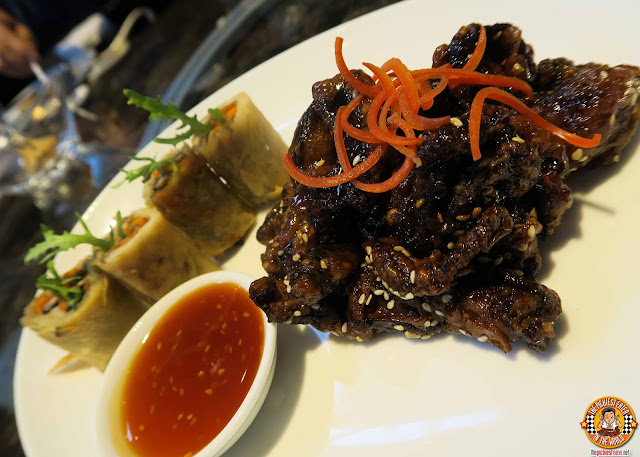 Not everything is how it seems with the Stir Fried Shitake Mushrooms with a Sweet Vinaigrette Sauce (P360). At first glance, I thought it was a shredded beef dish, and one bite of it let out a savoriness that one wouldn't expect from Shitake Mushrooms. It was  Alongside it are deceitful vegetable spring rolls that could pass as their meaty counterpart. 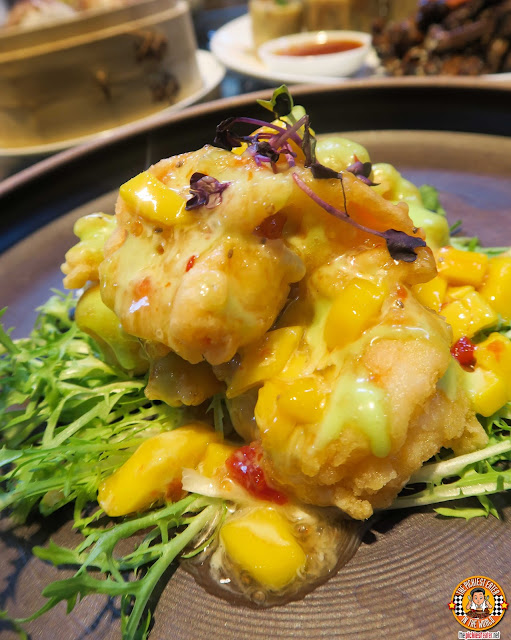 Another popular item among my friends was the Crispy Fried Shrimp with Wasabi and Mango Salsa (P890). Plump, juicy shrimps are breaded deep fried to a glorious golden hue, and doused with creamy Wasabi, that plays off the sweet notes from the mango. 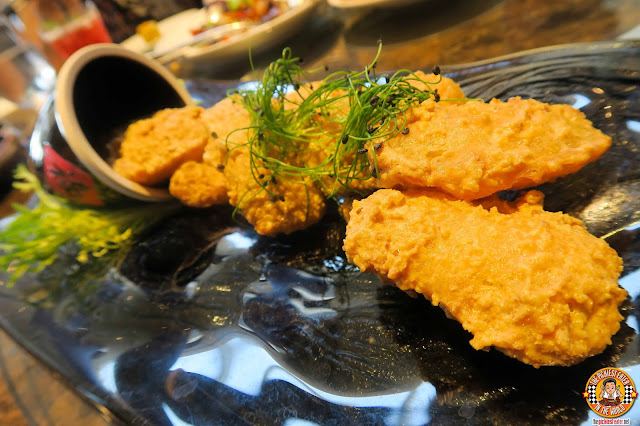 A dish that took me by surprise, was the Crispy Pumpkin Coated with Salted Duck Egg (P390). Seriously, this was crazy good. Thankfully, pumpkin is on the list of the few "vegetables" I eat (Fine, it's actually considered a fruit), so when my friend Bea saw this in the menu and asked if we could order it, I was game to try this off the bat. The soft pumpkin slices gave way to the crisp salted egg coating, that adds the right "oomph" to the dish. 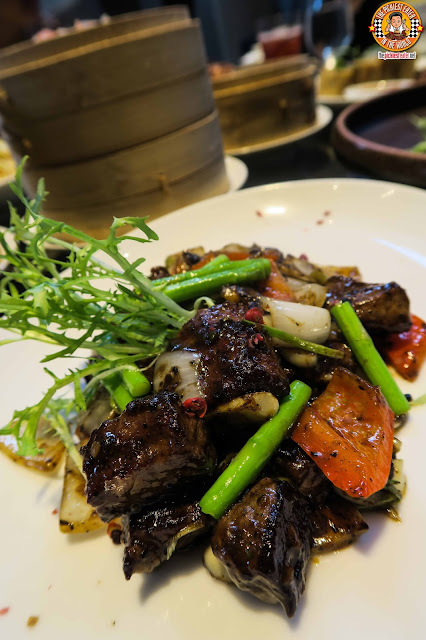 The explosion of flavors that the Wok Fried Beef Tenderlon Cube with Asparagus and Wild Hunan Pepper (P950) brought with it was outstanding. Remarkably tender beef cubes are stir fried and  is a nice touch for beef lovers. Wok-fried and combined with asparagus (that are easy to pick out for non-veggie eaters hehe), while the peppers elevate the natural flavor of the beef to a whole new level. 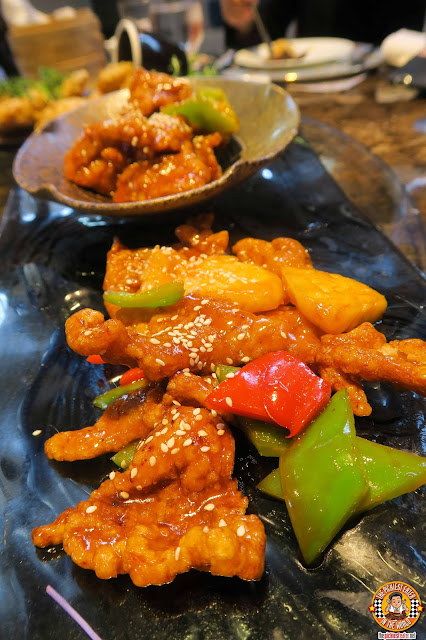 Our gracious host Mica showed us what we she had ordered for us, and said that if there was anything on the menu that wasn't part of what she selected that we wanted to try, to feel free to let her know. Well, I've said it once, and I'll say it again, I need Sweet and Sour Pork when I go to a Chinese Restaurant. The closest thing they had was the Rose Apple Pork with Sweet, Sour and Spicy Sauce (P550), and boy was it dynamite.

Make no mistake about it, this was no consolation prize. If the complexity of the flavors sounds a little daunting, don't worry, I felt the same way. I breathed a sigh of relief when it was explained to me that the sweet and sour part of the dish was laid out on the lower level of the platter, with the "Spicy" pork separated in another bowl.

The wonderful harmony of the sweet and sour glazed the thinly sliced, deep fried pork cutlets, helping accentuate the natural flavor of the pork. The Spicy portion, to me, was actually not spicy at all, with the gentle heat just adding a little bit of a tickle to your taste buds. Delicious! Perhaps the most iconic dish from China Blue is their House Specialty Black Gold Egg Custard Buns (P240). It's one of those dishes that looks too beautiful to eat, but when you take one bite of it, you throw that notion out the window. The pillowy soft black buns are filled with a golden egg custard, whose creamy flavor never overwhelms but instead, tantalizes your taste buds. If you can go to China Blue and eat only one of these bad boys, you, my friend, are a stronger person than I. 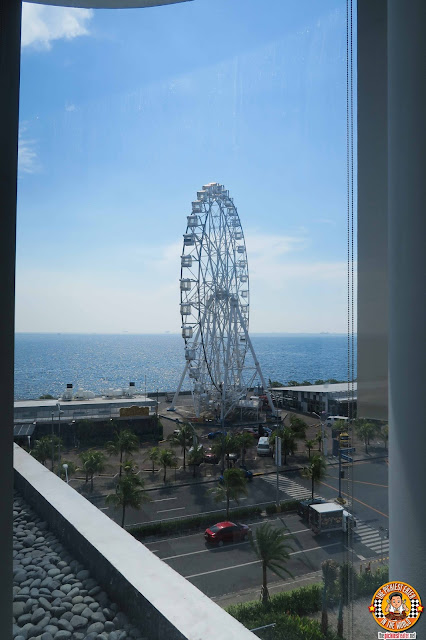 Gazing out the picture windows that lines the walls gives you a stunning view of Manila Bay, including the famous MOA Eye. Not too shabby for a date night, don't you think?

Granted, the prices are on the higher side, but it would have been silly to think anything less from a high end establishment such as Conrad Hotel Manila. However, when you get a taste of the freshness of the ingredients, as well as an understanding that the training that went into turning these team of cooks into a cohesive unit in order to replicate Chef Jeremy's intricate techniques, coupled with the opulent decors, then the price makes much more sense, which isn't too astronomical to begin with.

Definitely a welcome addition to the Chinese food scene that we Pinoys know and love!

Posted by The Pickiest Eater at 11:41 AM