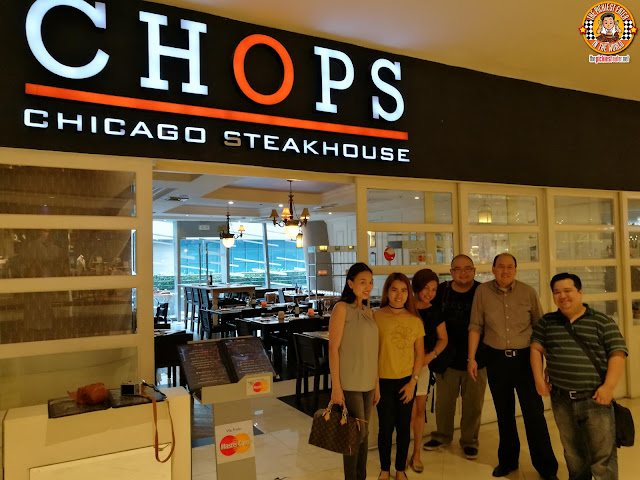 I think I may have eaten more steak this year than any other time in my life. Not that I'm complaining, as everytime I go to a different steakhouse, there's always something about the place that makes it a whole new experience. I've been to Chops Chicago Steakhouse's Greenbelt Branch a few years back, but I had yet to visit the branch nearer to me, located at the East Wing of Shangri-la Mall.

One fine day, my blogger buddies and I paid a visit to Chops, to find out if their food, particularly their steaks, would do the windy city proud!

For some reason, the vibe of Chops Shangri-la branch doesn't have the dark, mafia feel of the Makati Branch. Instead, the restaurant imbibes a classy ball room ambiance.

The restaurant also has an al fresco area where guests may smoke, or simply catch some fresh air. (Paradox, I know) 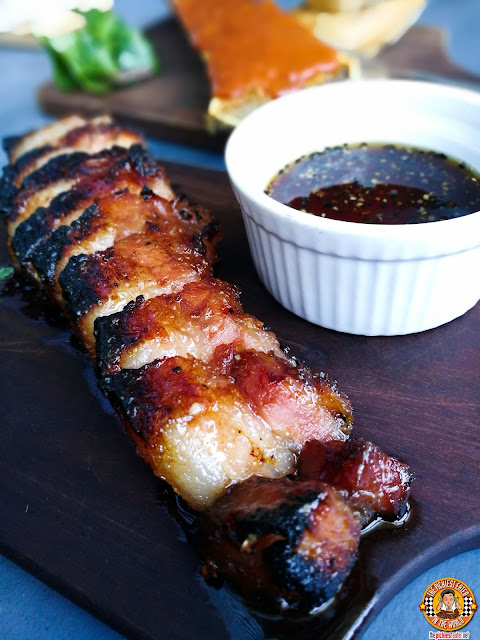 In any other restaurant, the Charbroiled Slab of Bacon (P320) would be considered a meal in itself. However since Chops is a steakhouse, it finds itself listed alongside the other appetizers. To me, calling this beautiful piece of meat a mere "starter" is almost an injustice, because I have no doubt it can pull its own weight as one of the mains. But then again, calling it an Appetizer worked to my advantage because I got to order this AND a main course.. so Never mind.. Yeah it's a starter! hehe..

The beautifully charbroiled slab of  homemade bacon is served with a side of pomegranate honey mustard and black pepper, that offers a hint of sweetness to compliment the smokiness of the meat. I can imagine going to Chops and trying something else other than their steaks, but this is something I will never miss out on ordering. 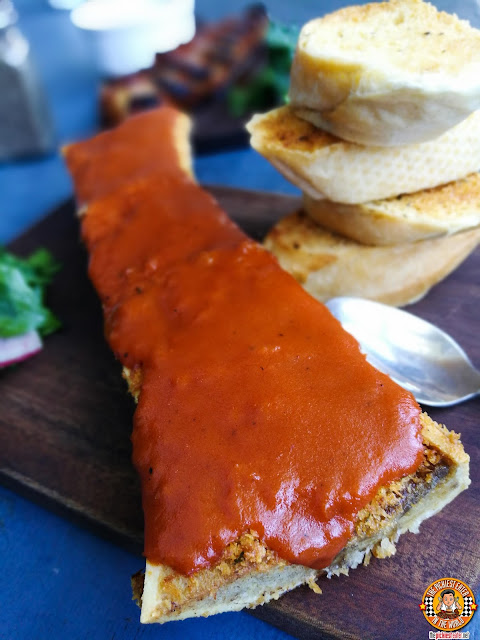 Another one of my favorites at Chops is The Bone Marrow (P295). A gorgeous bone marrow roasted to perfection, and slathered with a BBQ sauce that adds a tinge of sweetness to help counter the richness of the Marrow. Best eaten by smearing on the side of crostini.. The Parsely Salad is also served, but I think that's just to help with the guilt hehe.. 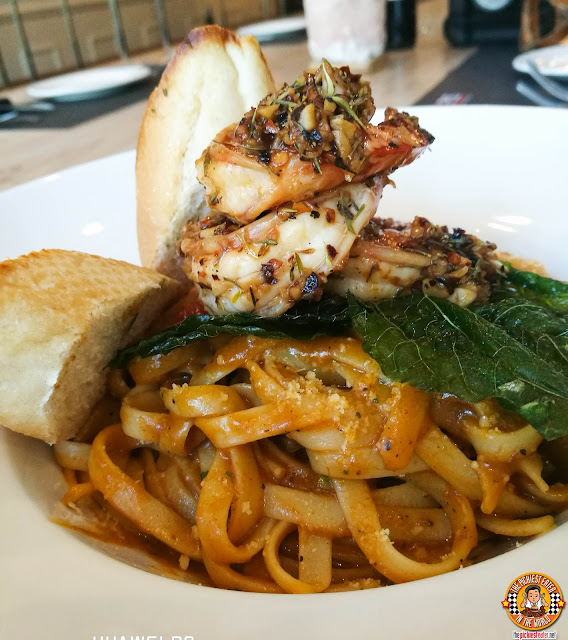 If you're looking for a seafood pasta dish, then you could be a member of the Prawn Society (P525). Plump Prawns are sauteed in garlic and Chili, a dash of Lemon Thyme, then laid over a bed of linguini pasta. The noodles are then smothered in a truffle Americana Sauce, before being sprinkled with parmesan cheese.

The seafood pasta was cute and all, but I was at Chops for the main event.

I've been to Chops before, but I only got to try the Tenderloin Steak. Although it was undoubtedly a delicious piece of meat, Tenderloin is my least favorite cut due to the absence of fat.

This time, Chops hooked me and my buddies up with the goods.. 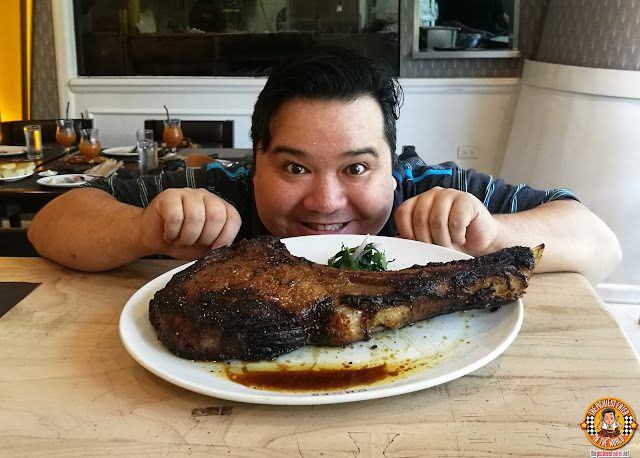 This beauty is 100% grass-fed USDA Certified and Graded dry-aged beef, and is large enough to feed a small nation.. Scratch that.. Maybe 4-5 people should be ok. 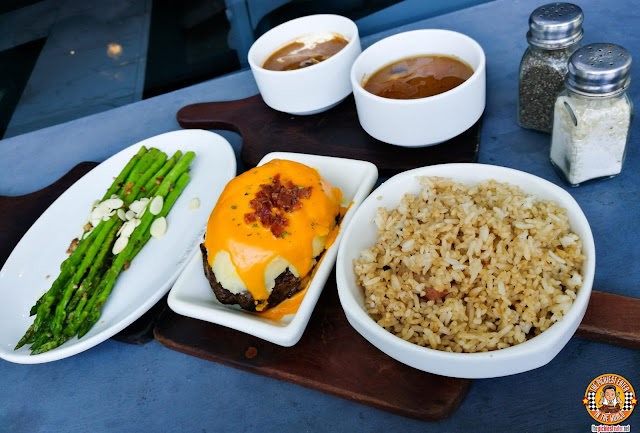 If that wasn't enough, the Tomahawk Steak also comes with two sidings and two sauces. The Chef chose the sidings, which s why you see asparagus in the shot, but he did well when he chose the baked potato. 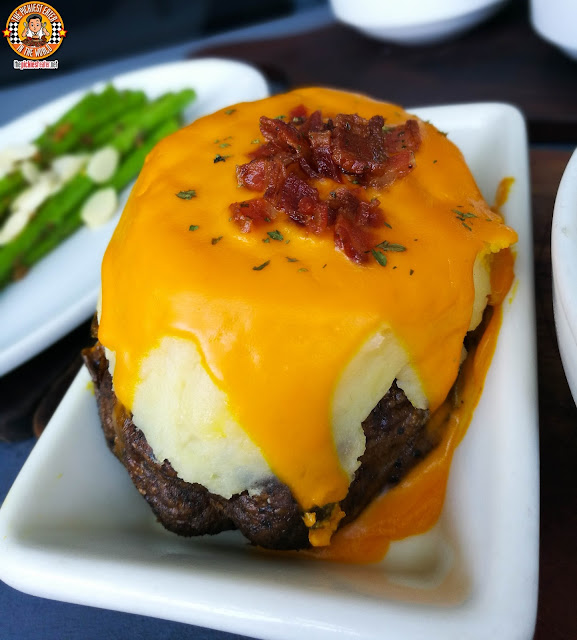 The soft potato was covered in a blanket of golden cheese, and topped with bacon bits, an awesome take to a classic steak side dish. 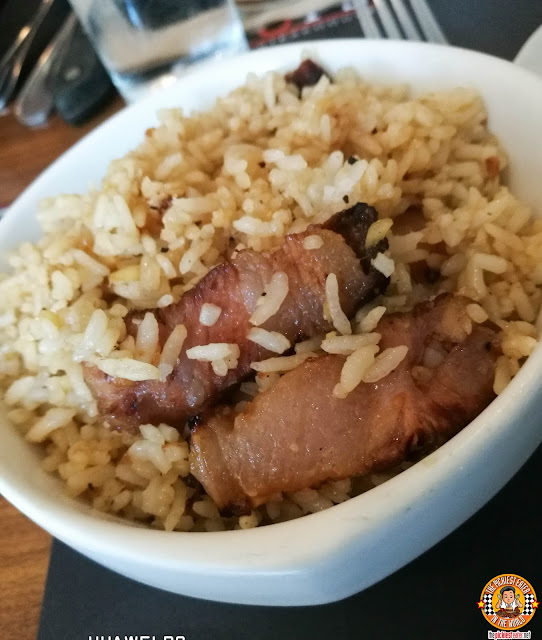 But let's face it.. We live in the Philippines. Pinoys need their rice. And what I needed, was Chop's Cardiac Rice (P180), which is basically rice fried with bacon fat. Sounds heavenly and deadly at the same time, don't it? 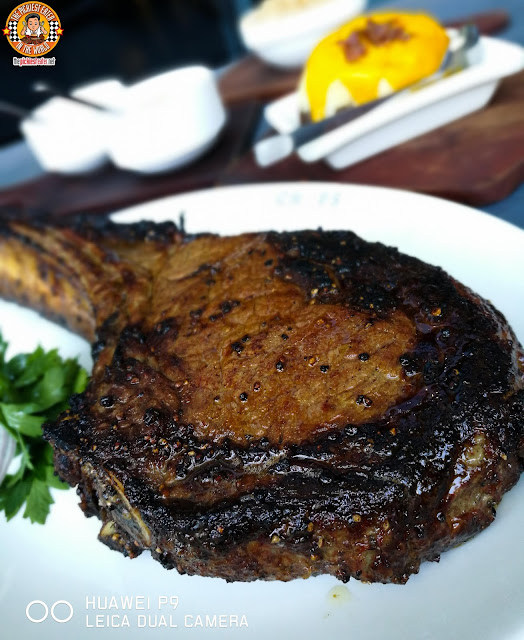 But dang, let me tell you about that Tomahawk. It truly was a thing of beauty. The edges had stunning char marks around it, yet it glistened from its innate juices. 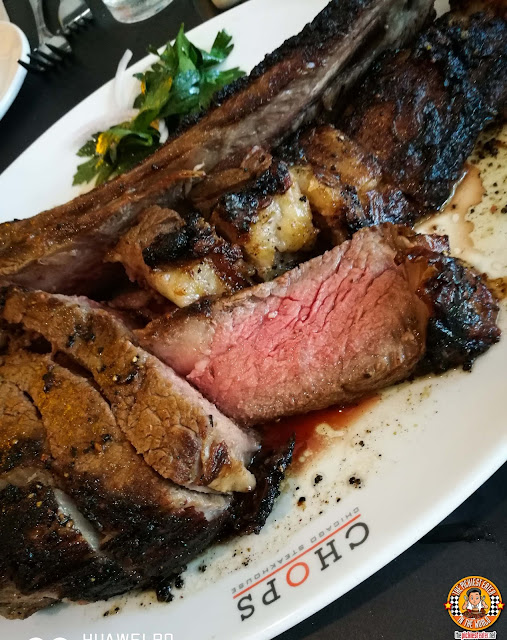 And the cook on it was nothing short of spectacular. The meat was seasoned perfectly, and had the nice touch of pinkness that I look for in my steak, as it remained incredibly tender to the bite. 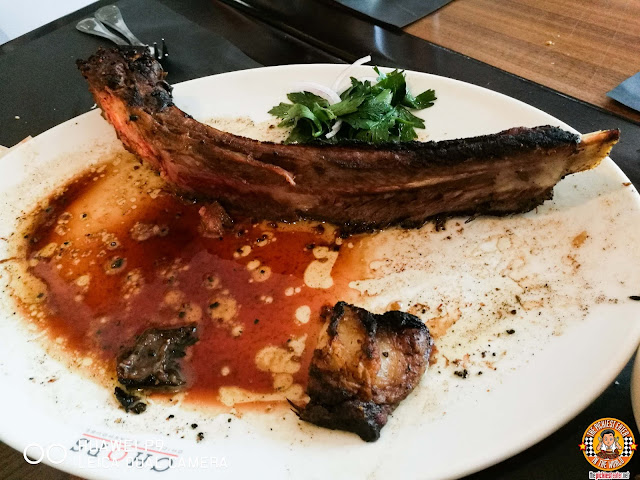 Which is why it comes to no surprise that within minutes, this beast of a steak was annihilated by my group (I'm not one to point fingers, but the one that ate the most rhymes with "Hungry Bat"). 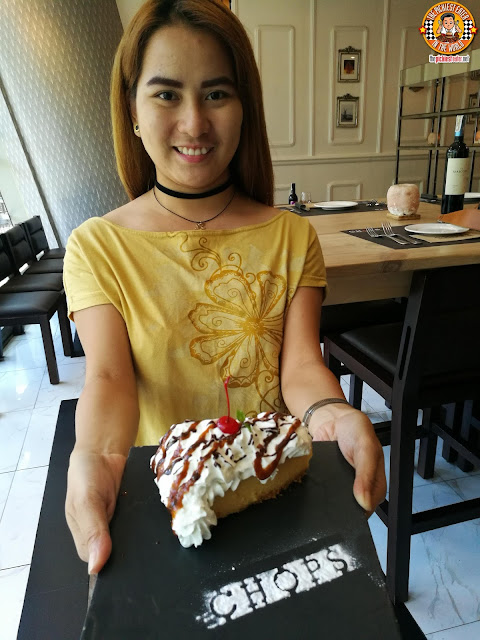 I could have sworn that I was too full to eat anything else, but the moment they brought out the desserts, my stomach seemed to find a way to maneuver everything I ate into another compartment. 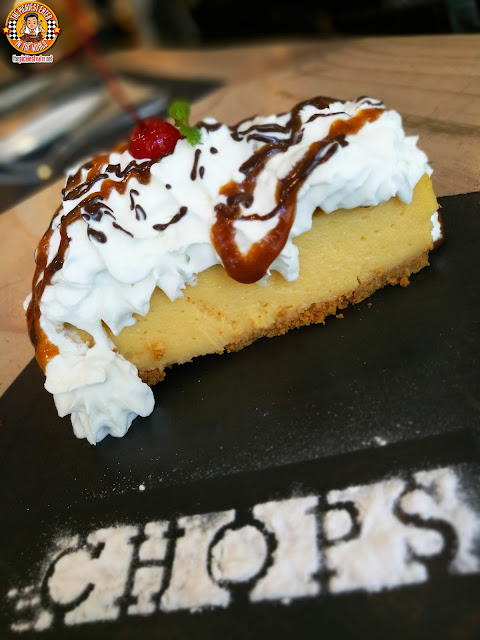 My favorite among the desserts was the luscious Banana Cream Pie (P195), which was peppered with crisp banana chips. 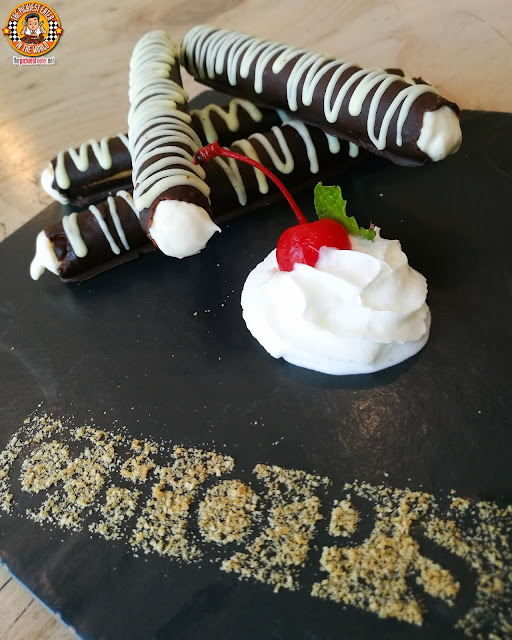 Also, Chops Chicago Steakhouse signature Dark Chocolate Cigars (P290), would be more than enough to satisfy those that like their chocolate on the bitter side. 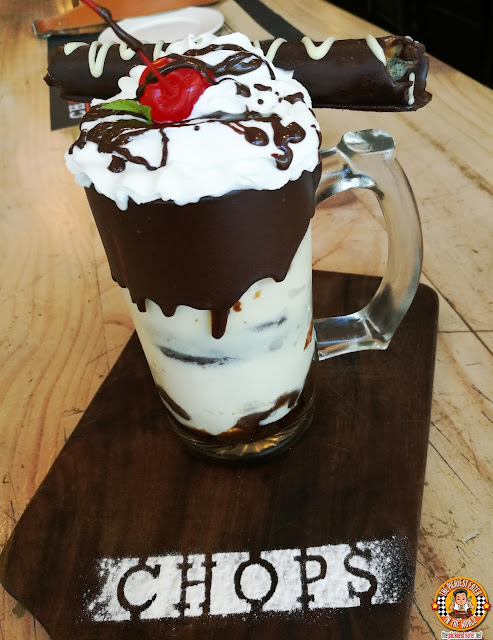 And the "Root Beer Cake" was quite refreshing in its creativity. 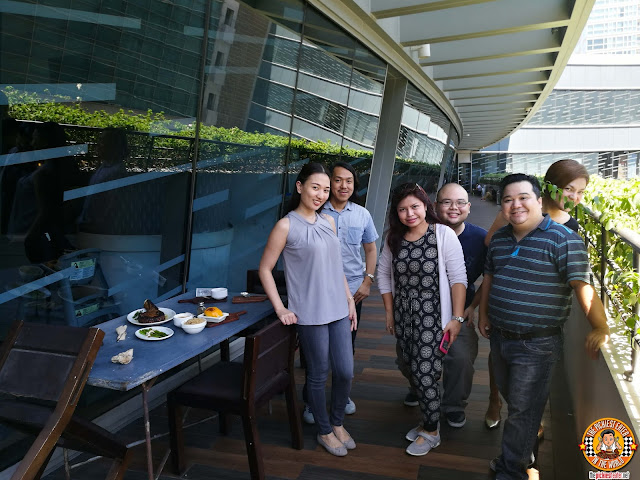 If you're looking for High Quality Steaks at competitive prices, Chops Chicago Steakhouse should be on your list of places to choose from.

Though their selection of steaks is easily among the finest you'll find in the country today, Chop's is actually so much more than just a steakhouse. The other entrees you'll find on the menu are amazing as well.

And with Chef Pete Ayson at the helm of the kitchen, that should come to no surprise to anyone.