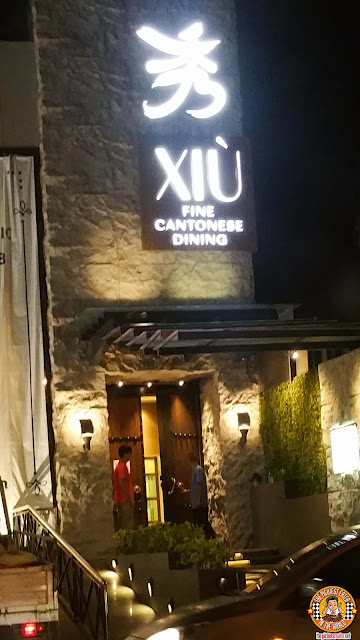 I'll be honest with you. I was a little sad when I saw that one of my favorite Chinese restaurants, Lugang, closed down their branch at Connecticut Ave. in San Juan. Sure there are other branches of Lugang conveniently located at malls around the metro, but the size of this branch, coupled with its convenient dedicated parking lot across the street, gave it a special place in my heart.

However, as it turned out, the HTCG Premium Food Concepts group, the brilliant minds behind Lugang, Tuan Tuan and  had something else in store for us with their latest "Baby", Xiu: Fine Cantonese Dining 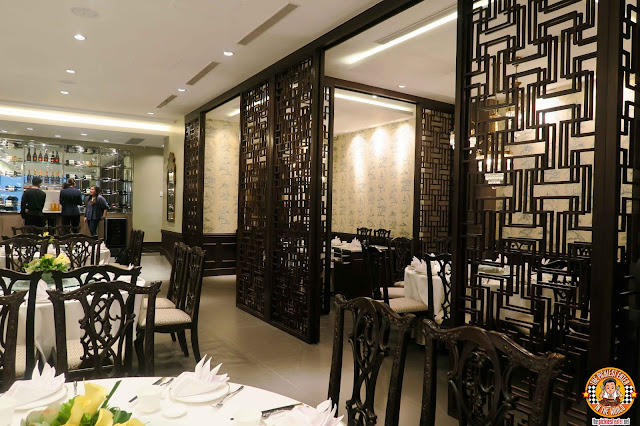 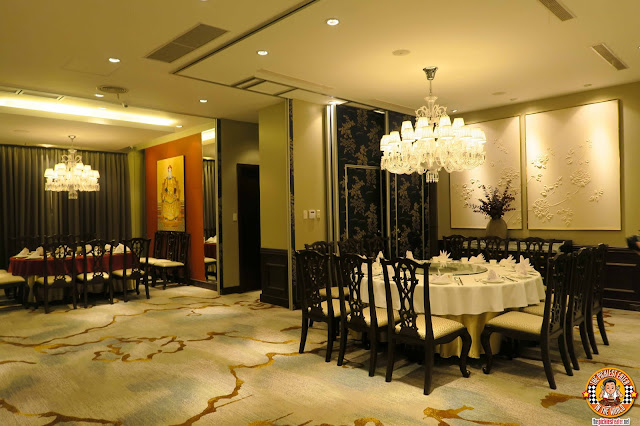 I was very impressed with the facelift that the building underwent to achieve the posh look that Xiu exudes. I honestly felt like I had stepped into a Chinese restaurant in a five star hotel. It's that stunning. Spanning two floors with several areas serving as private rooms, It became clear that this was no mere little sister of Lugang.. This was an establishment that was out to create a name for itself on its own merits. 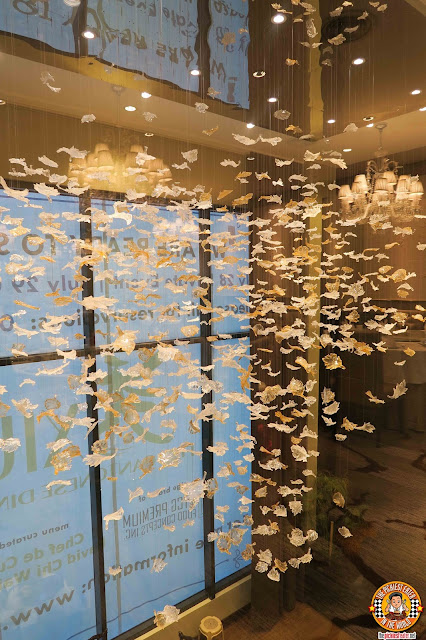 It was explained to us that Xiu translates to "Elegance". And that's exactly what the dining area personifies.

Xiu's goal was to bring the best of Hong Kong cuisine to the country, and with the collaboration of the HTCG Group and West Villa of Hong Kong, it seems like they did just that! 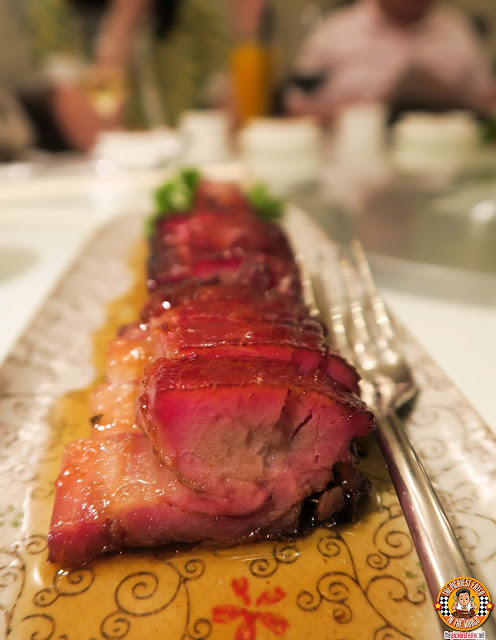 I love me some sweet meat (Umm.. did that sound weird?), so naturally, I loved the Honey Glazed Prime Cut Char Siu (P680). I could honestly have just eaten this with rice, and I could have gone home happy. The meat was a little on the thicker side, but tender enough for me to keep forking one piece after another. The sweetness was also just right. Perhaps my only comment was that I wish it had more fat, but it was still delicious nonetheless. 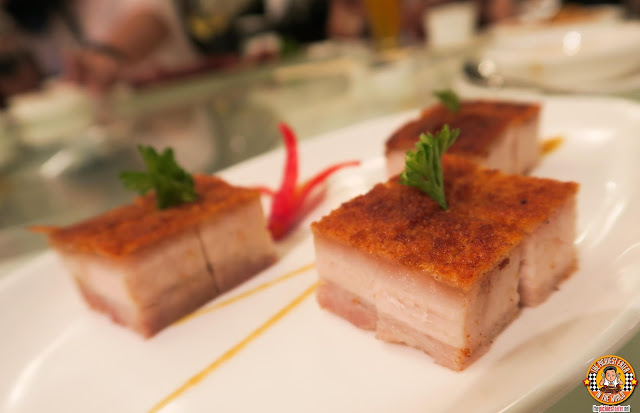 Besides, I had all the fat I could possibly want with the Cantonese Style Crispy Pork Belly (P680), Seasoned masterfully, the meat maintained a delicate tenderness while leaving the crispiness of the skin intact. The smearing of mustard sauces offers a lot more than just design. The tartness also prevents the richness of the fatty meat from becoming too cloying. 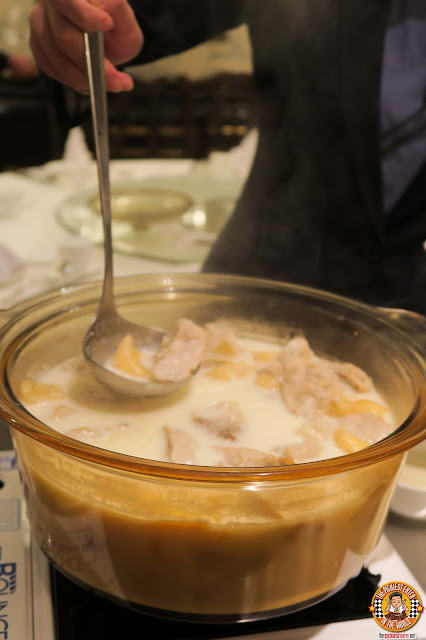 Being a Picky Eater, I found the Double Boiled Fish Maw and Almond Soup (P1,980 Small/ P3,880 Large, P680 Per Portion)  be a little bit out of my comfort zone, but the aroma it emitted got me intrigued. A sip revealed it had a flavor similar to that of Almond Jelly that I love, give a bit more savoriness. 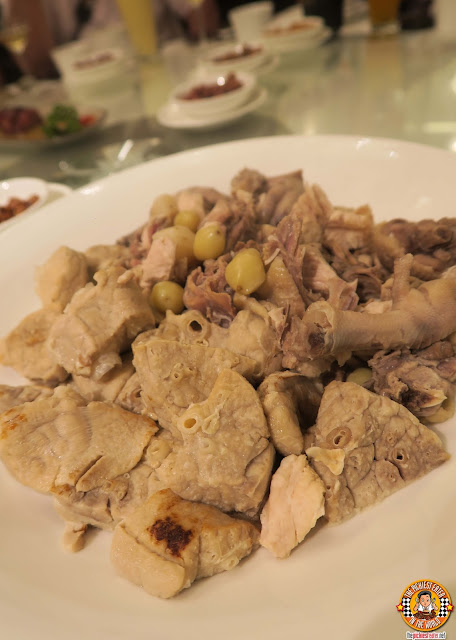 The infusion of the meaty flavor into the broth was achieved by slow cooking the mixture of pork and chicken into the soup, with the extra parts being served to the table. Not exactly a pretty sight but my friends swear to it being delicious. Not my kind of dish though hehe 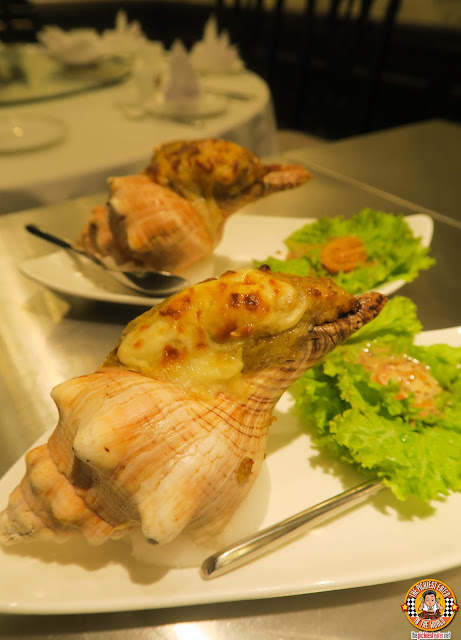 Yet another dish that left me intrigued, was the Baked Stuff Sea Conch, French Style (P480 per piece). The Chefs took the meat out of the conch, then finely minced it with bacon. They then mixed it into a fragrant curry sauce. The Conch is stuffed with a mashed potato bed, then the curry mixture is then poured back in, then topped with Cheese, and then finally, baked to a gorgeous golden hue.

"Conch" is something I normally don't eat, but I have to admit, this was pretty amazing. The curry sauce was easily among the best I've had, and it's definitely something you must try when dining at Xiu. 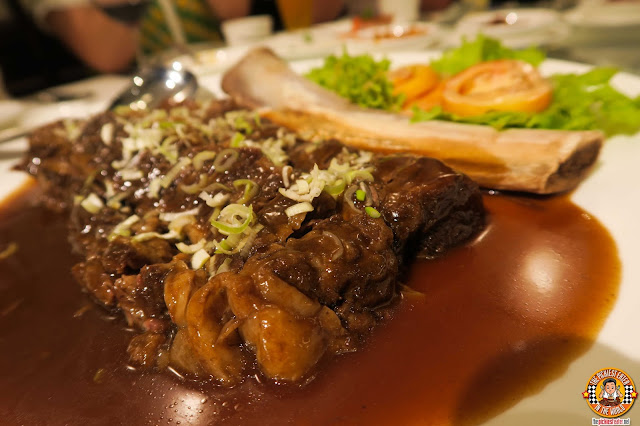 The highlight of our evening was the  Stewed US Beef Short Ribs (P2,280). This is one of those dishes that you ask for before going on the electric chair. The Beef was so tender, it was served on the bone that it came from, and you could see how cleanly it came off it. And I loved how it had gorgeous linings of fat on it. The sauce that the short ribs were stewed in was absolutely divine, and perfect for pouring over your rice. 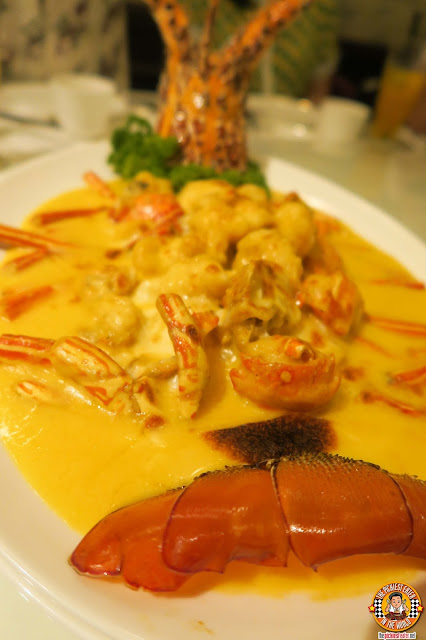 Due to an allergic reaction I had, I haven't eaten lobster since I was a child. However I contemplating tempting fate again when they brought out the Baked Tiger Lobster with Cheese (Seasonal Price). I told you my favorite dish was the short ribs, but my friends who were with me swear that had I tried this, I would have undoubtedly changed my mind. I couldn't resist, and took a scoop of the the creamy cheese sauce, and I was blown away. 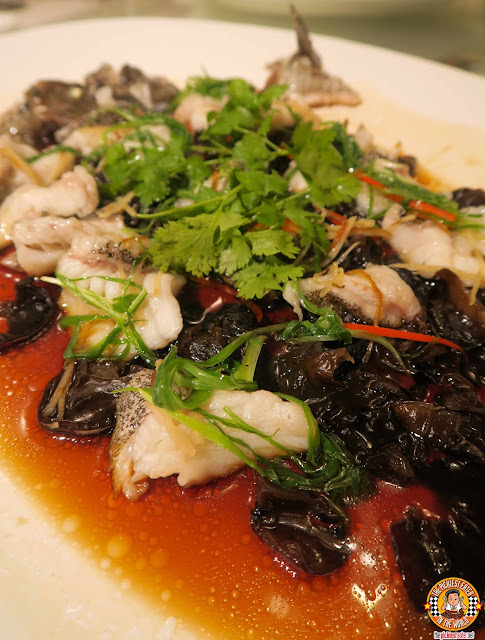 Another delicious seafood dish was the Steamed Lapu Lapu, Traditional Style (Seasonal Price). This is one of those Chinese dishes where the beauty truly lies in its simplicity. The freshness of the steamed fish was undeniable, as it soaked in the flavors of the lightly sweet sauce. 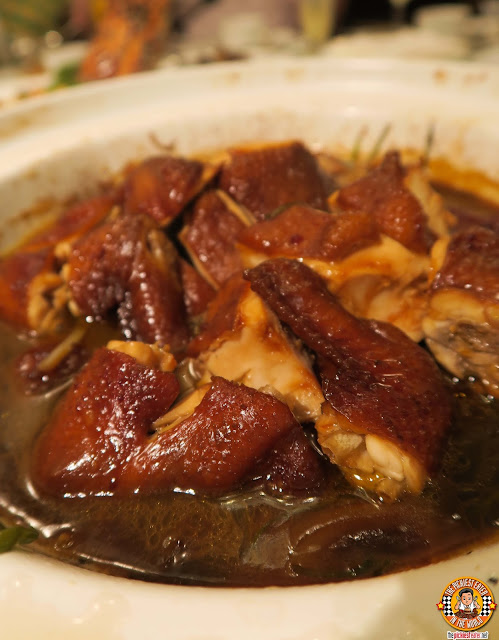 Another dish I enjoyed was the Premium Soy Sauce HK Chicken in Claypot (P980/half & P1,880/whole). The cuts of chicken were swimming in a delicious sauce, that was just bursting with flavor. Yet another one of those pour-the-sauce-on-your-rice dishes. 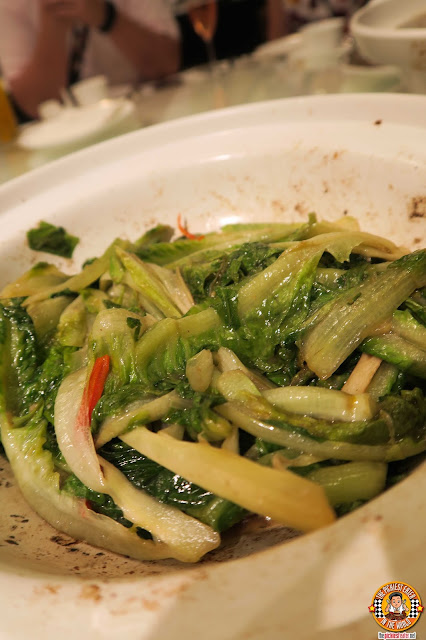 Rina found it rather funny that I was daring enough to try Sea Conch and Fish Maw (Bladder) for the first time, but drew the line at the Chinese Lettuce with Shrimp Paste in a Claypot (P480). 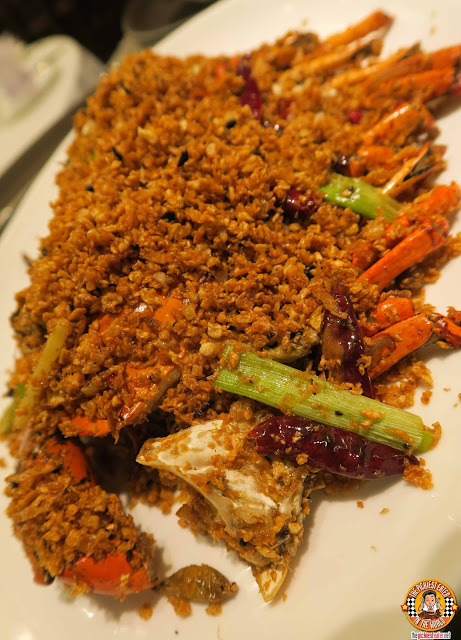 Since my unfortunate encounter with the lobster when I was a child, I've stayed away from crustaceans, That meant I couldn't try the Wok Fried Crab with Garlic, Typhoon Style (Seasonal). However, within a few minutes, the plate was virtually empty. Almost as if it was wiped out by a Typhoon (No Pun Intended). 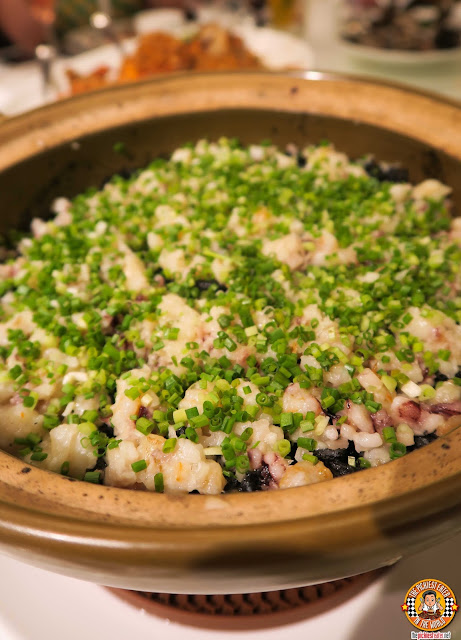 Living up to my name, I also passed on the Baked Black Ink Rice with Seafood in Claypot (P580), as I don't eat squid or squid ink. If you like the black stuff, then I'm confident you won't be disappointed with this. 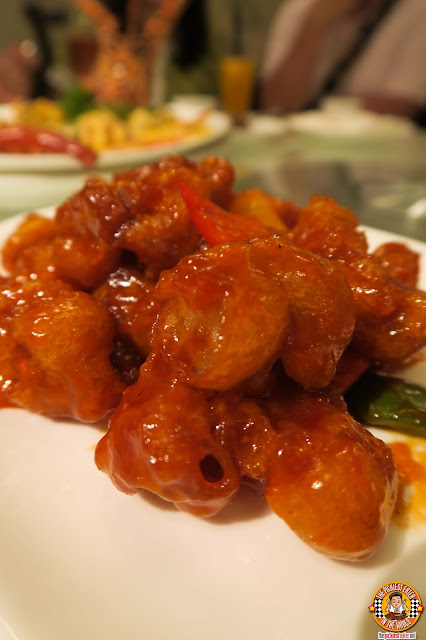 I've said this time and time again, whenever I go to a Chinese restaurant, I need Sweet and Sour Pork (P480). It just doesn't feel right without it. So I was elated to find out that Xiu's version of Sweet and Sour Pork was included in the evening's tasting menu. The coating of the pork had the crispiniess that I look for in heaps and bounds, and the sweet and sour sauce glazed the chunks, as opposed to simply drenching it.Very delicious, and I would put it up there with the other dishes you must try when you're at Xiu. 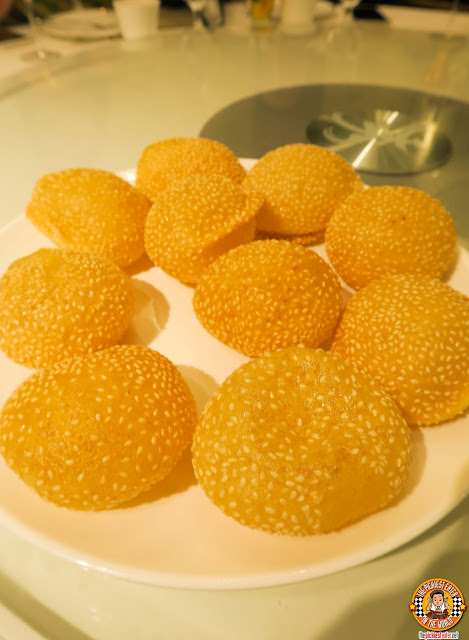 You know, I always thought it was kind of weird that I enjoyed the outside shell of a Buchi more than I do the filling, I've always wondered what it would taste like without it. Xiu's Longevity Ball helped answer that question for me, and apparently, it's pretty darn good. The best way to describe it would be, that it's the outer shell of a Buchi, but inside it's hollow. It's light and airy, and actually quite delicious and... 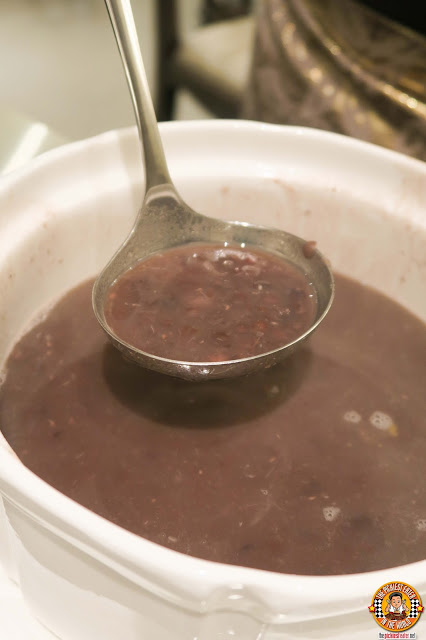 It paired well when dipped into the Hot Red Bean Soup, which was quite comforting, and a nice palate cleansing way to end the meal. 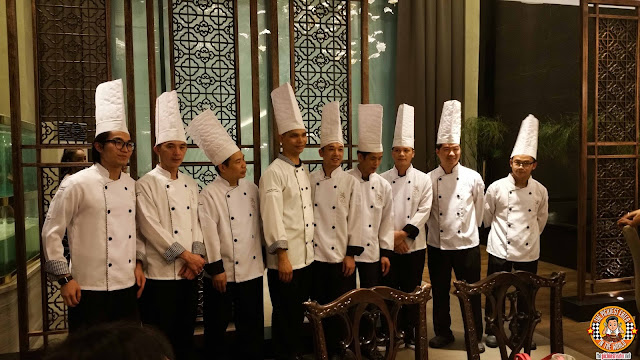 After the meal ended, our hosts brought out the hardworking crew of Chefs of the West Villa that were flown in for Hong Kong to help get Xiu off to a great start. 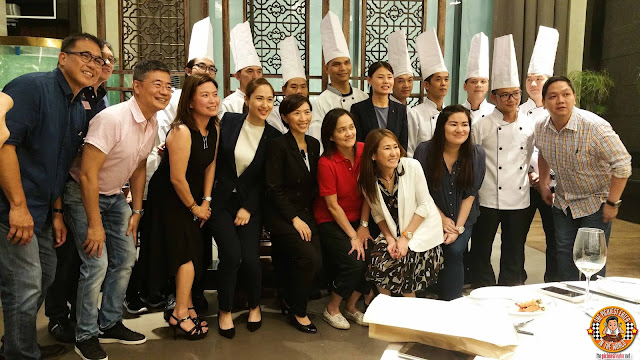 Afterwards, it was the turn of the staff of Xiu to take a bow. If this tasting night was any indication of what's to come, it looks like Xiu is going to be another hit for the HTCG Group!

Posted by The Pickiest Eater at 10:52 AM