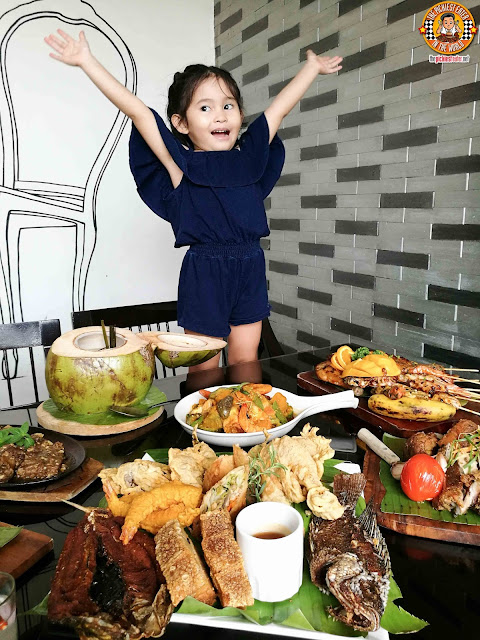 Whenever someone asks me where to take their family for a nice Filipino dinner, Pamana always comes to mind. Pamana is one of my favorite destination restaurants when heading to Tagaytay. As much as I love Pamana, I'm always left in a quandry between which restaurant to visit during my limited time in Tagaytay.. Pamana or The Hawaiian BBQ? Which is why I was ecstatic when I found out that the Mother Ignacia branch of Pamana, is also the home of The Original Hawaiian BBQ, where you can cross order from either restaurant's menu! 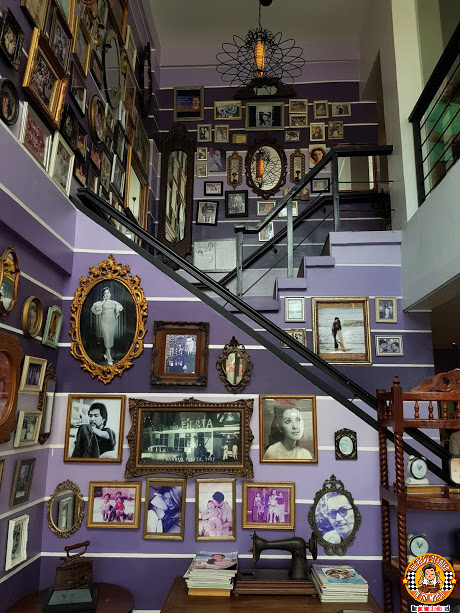 Like the Tagaytay Branch, you enter Pamana feeling like you're being welcomed into the Ongpauco's ancestral home, complete with family photos adorned at the walls. 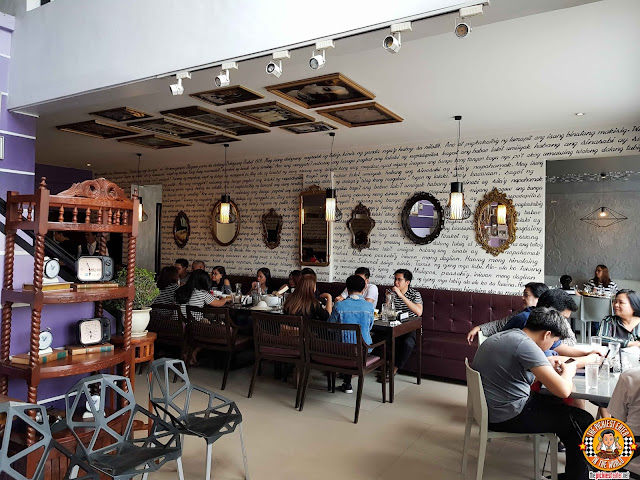 And also like Pamana in Tagaytay, you suddenly feel right at home yourself, as if you've been a member of their family your entire life. As comfortable as the ambiance is, the tie that binds everyone together in Pamana is their food, which in case you've never been there before, is nothing short of spectacular. 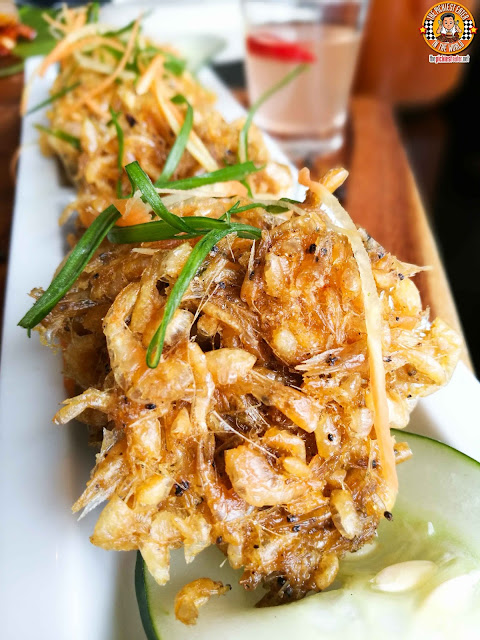 Our meal started off with Pamana's Okoy Bites (P215), their take on the popular Pinoy Seafood Fritter. Bite sized but not lacking in flavor, the deep fried crispy bites were best enjoyed with the side of Chili Vinegar. 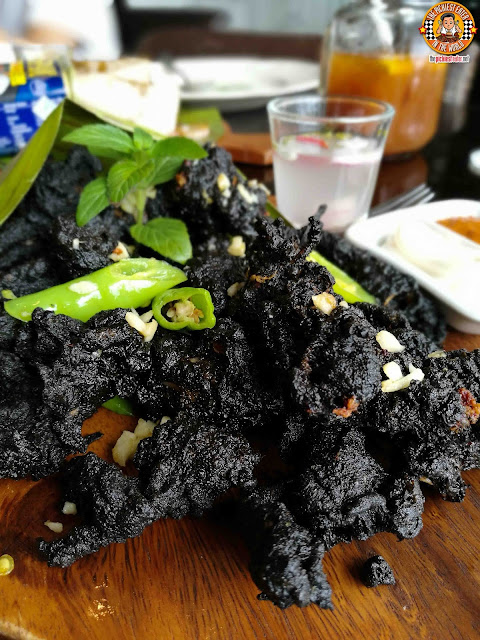 Next up was the Crispy Adobong Pusit Calamares (P305). I'm not a fan of Squid Ink but Rina does enjoy it every now and then, but this was her first time to try it infused in a calamares, and she wasn't disappointed. The natural flavor of the squid was still evident, but was further enhanced by the squid ink, giving it a more pronounced flavor. She also enjoyed it with the Chili Vinegar dip. 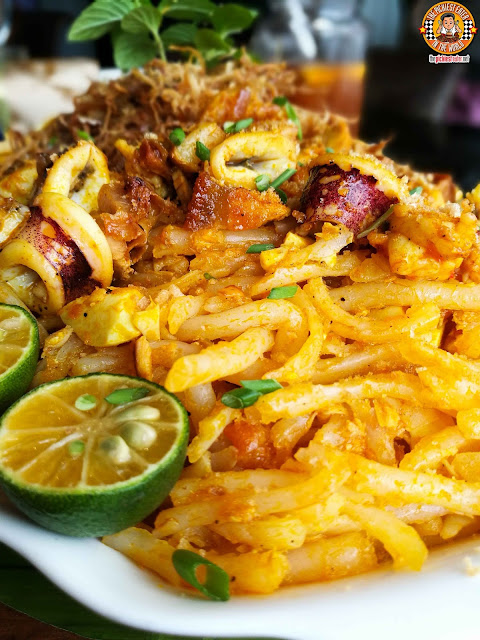 Pamana treats every meal like a celebration, and no celebration is complete without Pancit. From the various Pancit dishes on their menu, Pamana served their Pancit Malabon, which was a delightful explosion of textures and flavors. Made with a medley of Mixed Seafood, Hard Boiled Eggs and bits of Crunchy Pork, the comforting flavors of home were unmistakable. 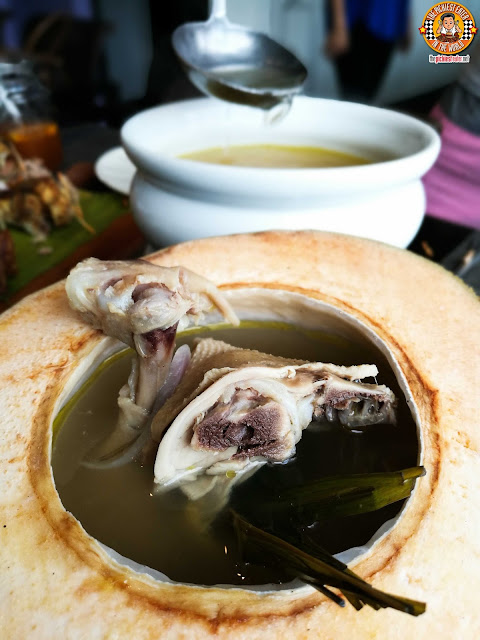 Ever since I tried Chicken Binakol a couple of years back, I've been a fan. Pamana's version of Chicken Binakol (P300) reaffirmed that. Soft Pieces of Chicken are cooked in Coconut Juice, Ginger, and Lemongrass, playing off different notes, yet coming together cohesively with every bite. 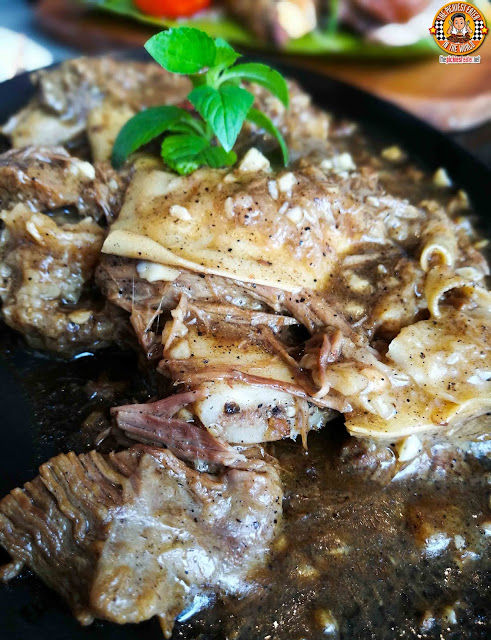 I'm used to having my Tadyang ng Baka crispy, however I wasn't going to say no to Pamana's Sizzling Tadyang ng Baka with Bone Marrow Gravy (P415). The beef itself were incredibly tender, as evidenced by being able to cut right through it without the use of a knife. However it was that rich bone marrow gravy, especially when mixed together on a pile of steaming hot rice, that brought this dish over the top. 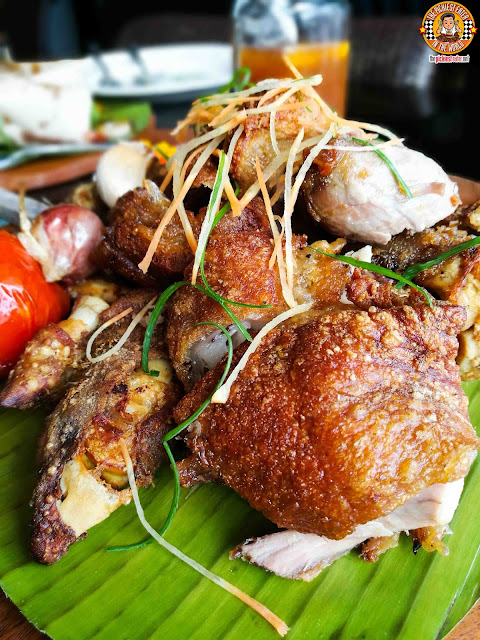 Many establishments claim to have invented the Crispy Pata, however I tend to believe that the popular Filipino dish truly did come from the kitchen of Rod Ongpauco, the father of Happy Ongpauco-Tiu. the woman behind Pamana's success. 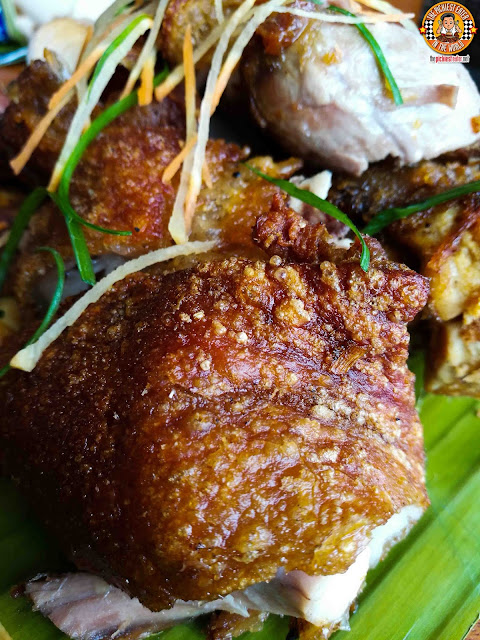 So of course, as a tribute to Mr. Ongpauco, Happy added the Crispy Pata ni Rod (P630 The Original Way) to her menu, and as expected, it is easily one of the most in demand items on Pamana's Menu. Of course, Happy made sure to add her own personal touch, by making the Crispy Pata also available Boneless Style (P650), and "Maanghang and Mabawang" (P645). 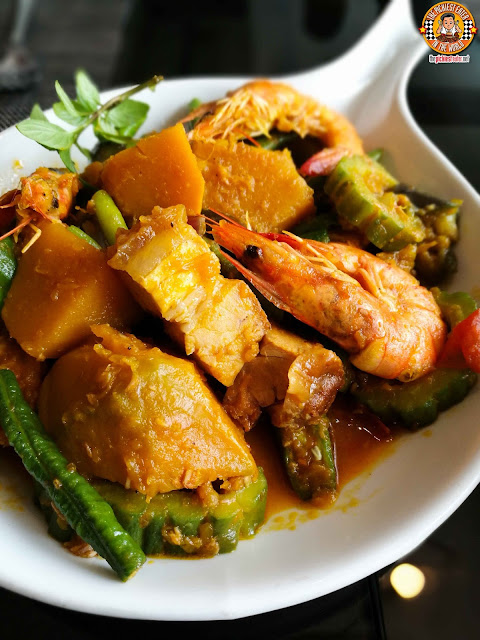 Something that my wife learned in our nine years of marriage, is that if you want me to eat vegetable dishes, then throw some delicious meat into it. Which is why I was very game to try the Pinakbet with Shrimp and Lechon Kawali (P295). I grew up with an Ilocano yaya that took pride in making the best Pinakbet in the land, and she would add extra pieces of Liempo to get me to eat it. Which is why I found this to be quite familiar and enjoyable.  The Pinaket sauce made for a wonderful sauce when poured over the crunchy pieces of Lechon Kawali, and went perfectly with the innate sweetness of the squash chunks. (Just like when I was a kid, I tended to avoid the slices of Ampalaya hehe). 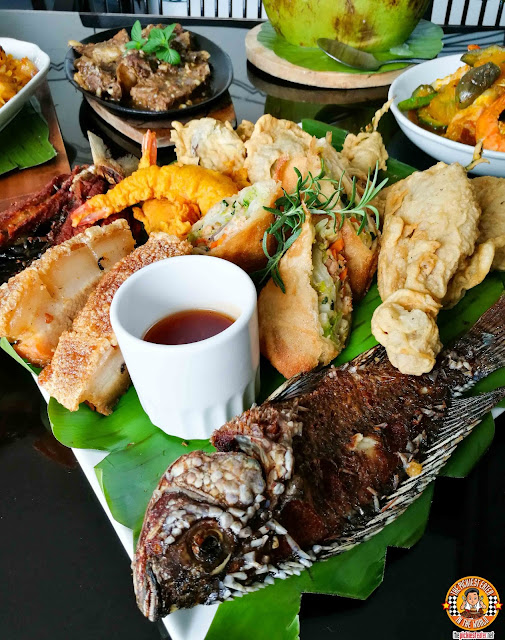 Given that Pamana anticipated it being a popular choice for families and big groups, it was a no-brainer for them to come up with a family platter that includes all the favorites of Mama Chit, the beloved family matriarch. 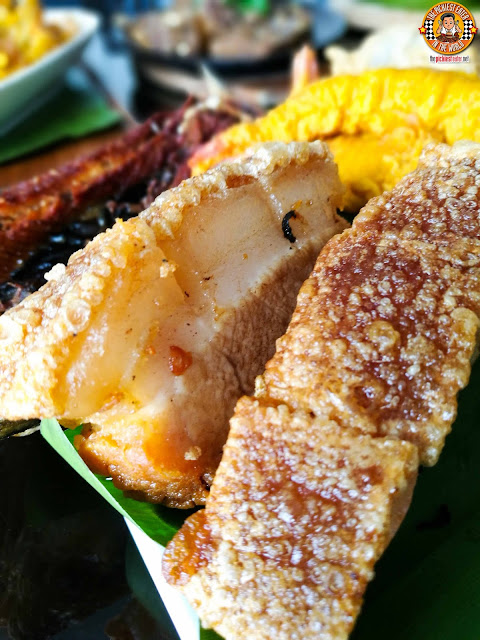 Words cannot express how beautiful that Pork Belly was. The exterior had a tantalizing crunch to it, yet the fat remained melt in your mouth soft, while the meat itself was not dry at all. 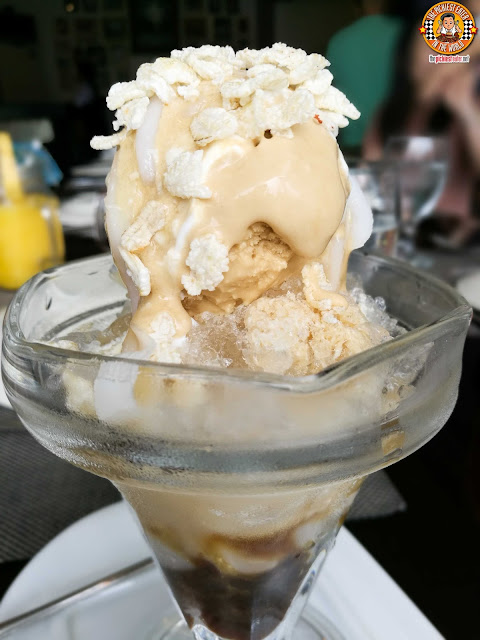 I'm almost ashamed to say that I had no idea what Guinumis was until I had it for dessert at Pamana. At first glance, I thought it was a Vanilla Sundae, however I was very pleased to discover it was so much more.

The "Panutsa" based Ice Cream is doused in a mixture of Coconut Milk, and Evaporated Milk, giving it an unreal creaminess. The

Guinumis, an indulgent shaved ice dessert with pinipig and tapioca topped with coconut milk, evaporated milk, and homemade panutsa ice cream. Just perfect. Craving for local flavors recreated by one of the country's illustrious culinary icons? It's all here at Pamana Restaurant. Savor tasty bites of local flavors and take a nostalgic step back in time...at Pamana Restaurant. 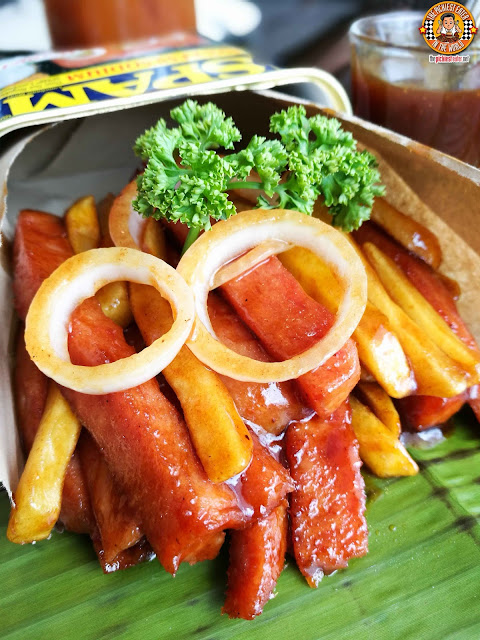 Even though I had this during our Tagaytay trip late last year, there was no way that I could go to Hawaiian BBQ and NOT order the Hawaiian Spam and Fries (P235) again.

Thin strips of the world's most famous luncheon meat is fried with caramelized onions and crisp French Fries, then coated in Hawaiian BBQ's homemade BBQ Sauce, creating one of the most addicting items on their menu. 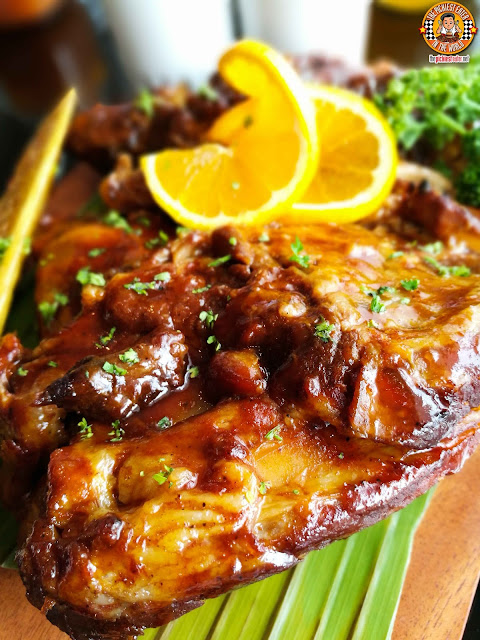 Hawaiian BBQ's claim to fame has to be their Original Hawaiian Baby Back Ribs (P380 Small/P765 Medium/P990 Large). Lip smacking, fall off the bone ribs, glazed in the Hawaiian BBQ Sauce that offers a sweet and tangy touch. The Ribs are best paired with their selection of sides, including  Roasted Garlic Mashed Potato, Coleslaw Salad, Taro Shoestring Fries, Buttered Corn and Carrots, and French Fries. 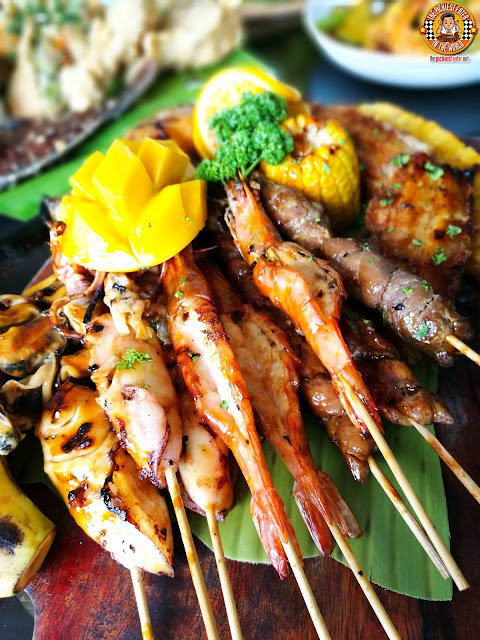 The Barbecue Platter (P940) is an assembly of some of Hawaiian BBQ's greatest hits in one magnificent wooden slab. Before ordering, you have choose from their signature sauces, which includes the Original Hawaiian BBQ, Sam Choi's Spicy Rub, or Coconut Honey. 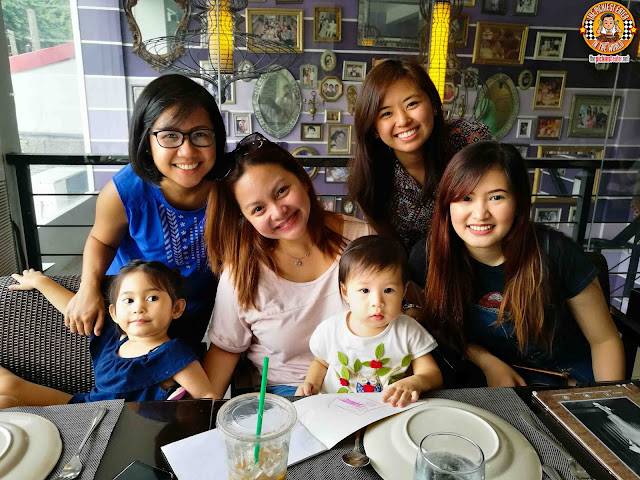 The restaurant's name alone makes it clear that family comes first in the Ongpauco household, which is why going there with my KTG family was only fitting, and made my visit to Pamana even more enjoyable. Not to mentoned, having the Hawaiian BBQ Menu readily available will truly making your dining experience something special.

Posted by The Pickiest Eater at 12:49 AM