ENTER... YABU: THE HOUSE OF KATSU 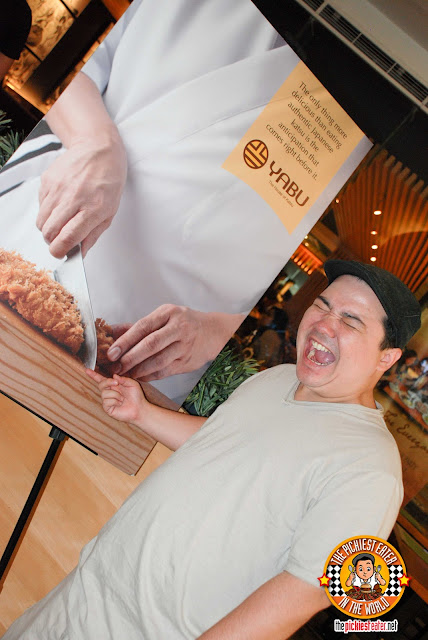 I had heard nothing but good things about Yabu: House of Katsu from some very credible sources, but I'm not really a huge fan of Japanese Food. As we were walking around the SM I took a glance at the menu of Yabu, and saw an item that caught my attention.. "Rosu Katsudon".

All of a sudden it became clear to me, and eating at Yabu was now a must. The first time I heard about Yabu, was when a friend of mine, Direk Yeyey, tagged me in a picture of this dish.. Rosu Katsudon. In the picture it said, "Rosu means it has a bit of fat in the meat so that adds a lot of flavor to the dish." 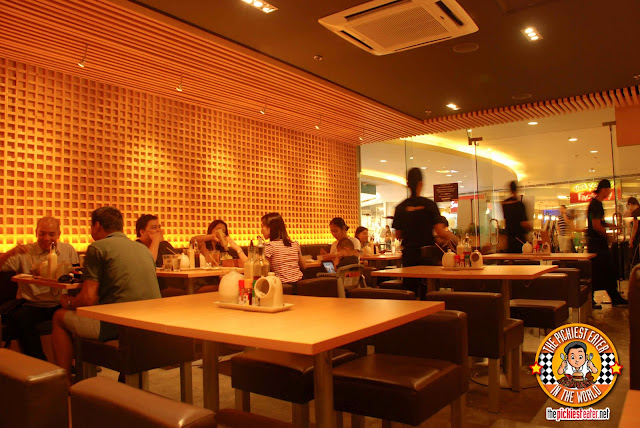 As usual, we got there a little bit before the lunch rush, but the place already had a good number of people in it. in fact, we almost didn't push through with our trip there because the hostess was going to seat us in a cramped two seat table in between two other parties. I protested because there seemed to be enough empty booths to accommodate us (we had our camera and some of Rina's shopping bags -not to mention i'm a bit claustrophobic- so there was no way that tiny table would be comfortable enough for us to enjoy our meal). She said that all booths were full, which was weird because I don't think she realized I had eyes that would allow me to see otherwise (there were at least two available booths).

So I said, "Miss, thank you, but never mind." and told Rina we'd go back another time. As we walked out the door, the same hostess chased me back and said, "Sir, we found an available booth for you! Would you like to take it?".

Can you imagine how awesome I'd be if I played poker? 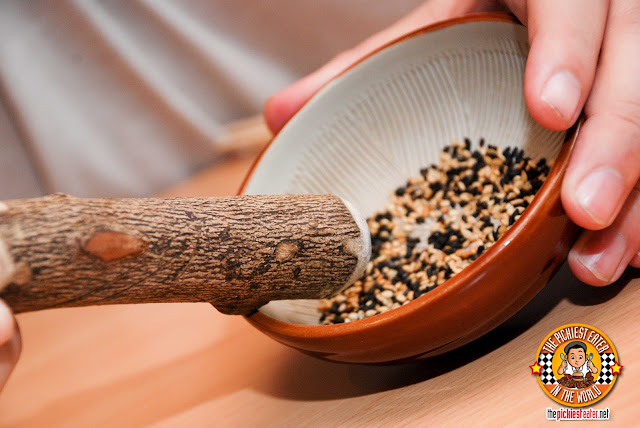 According to Yabu, the secret to achieving ultimate Katsu bliss can be achieved in Four easy steps. First, Grind the Sesame seeds (Both regular and Black) in the bowl they give you. The ceramic thing they provide you to grind the seeds up looks like a piece of wood, to make it seem like you're doing it just like they did in the good old' ancient days. 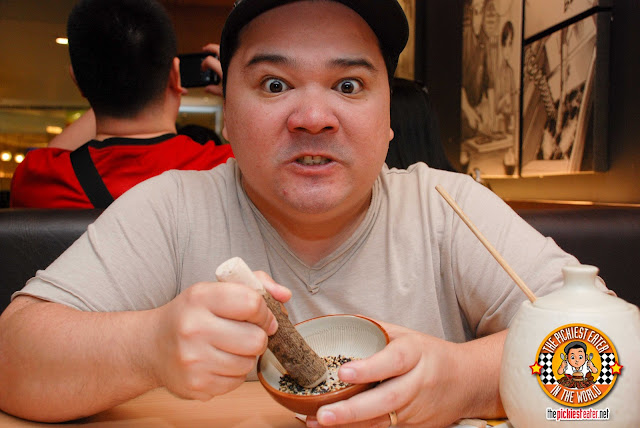 Unfortunately, I'm not so good at grinding stuff, so no matter how hard grinded those seeds, I couldn't seem to penetrate their shell! It was like they were wearing an Adamantium bullet proof vest or something. Rina was getting a little worried I might break the bowl so she took it away from me after a while. 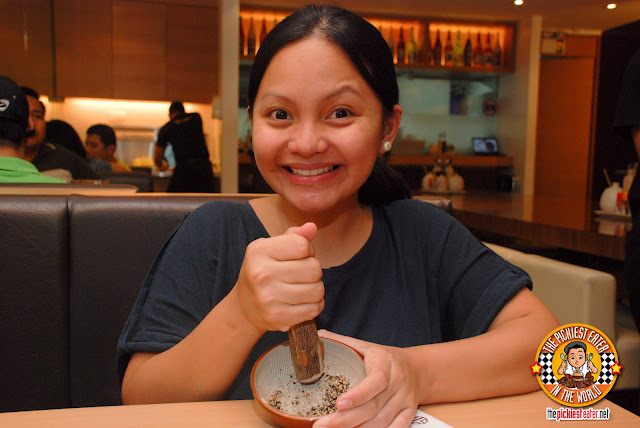 And then when SHE started doing it, the seeds Miraculously turned into a fine powder.. not to mention she did it all with that beautiful smile on her face, as opposed to my constipated-vein-popping-out-of-my-forehead look. 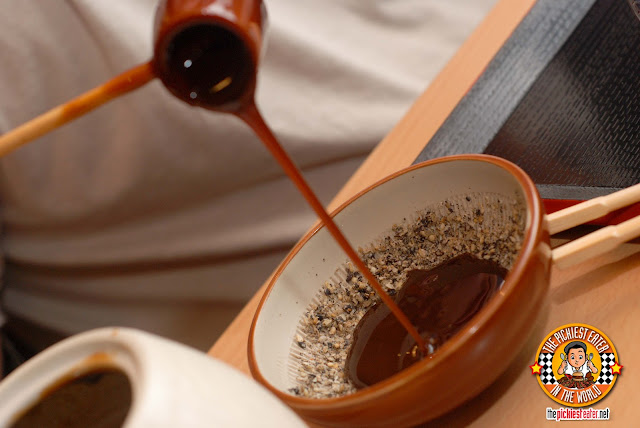 You second step is to pour the Tonkatsu sauce over ground up seeds. They provided you with this instrument that serves as your measuring spoon, but it kinda looks like a corn cob pipe. You fill up the "Spoon" with no less than three "Spoonfuls". Your third step is simply mixing up the sauce with the sesame seeds, then the fourth step is the no brainer.. Dip your Katsu into it and enjoy.

So now that I got that out of the way, it was time to see what Yabu was all about. 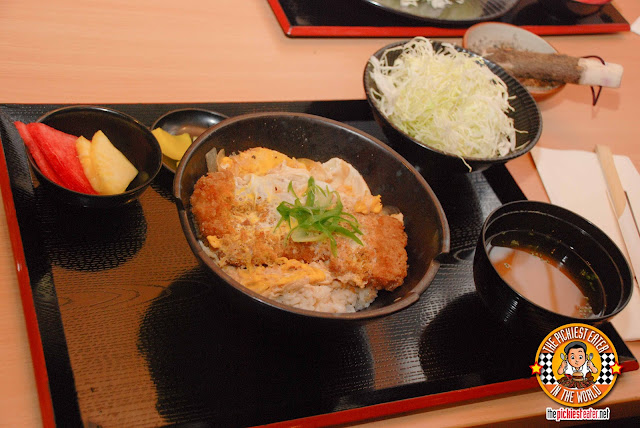 Rina wanted Katusdon, so I took one for the team and gave her the Rosu Katsudon Set Meal (P295) that I went there for. Each Set Meal comes with Miso Soup, Japanese Pickles, Unlimited Cabbage (which you can mix with the Japanese Vinaigrette they provide you, which Rina enjoyed), and some sliced fruit. 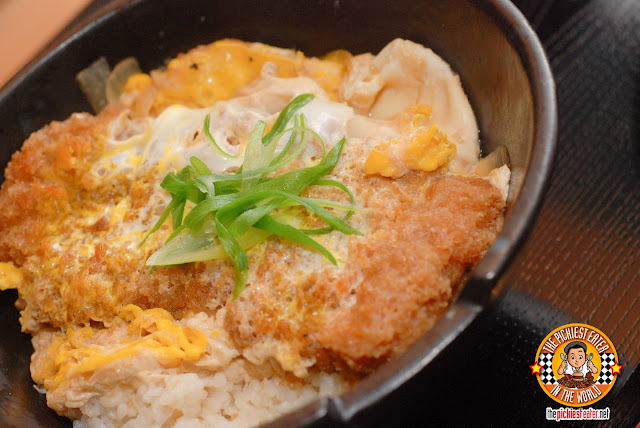 Direk Yeyey knows his food, so he was spot on when he declared Yabu's Rosu Katsudon as the best Katsudon he's tried, because I would give it that accolade as well. And yes, the presence of the fat played a huge part in it. The thick chunk of meat was juicier than any Katuson I had ever tried, and the mixture of the egg and on the crispy crust went perfectly with the softness of the Japanese white rice 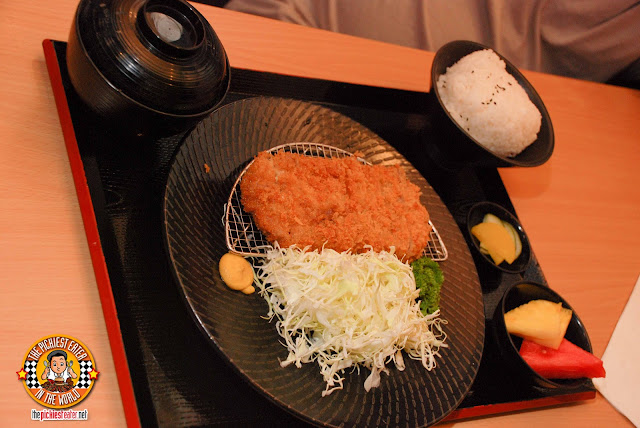 For me, I ordered the Kurobuta Pork Tonkatsu Set (P575). The meal came with the same stuff that Rina's Rosu Katsudon came with. Presentation wise, it reminded me of Ma Maison's Tonkatsu Meal as well, but maybe just a bit prettier. 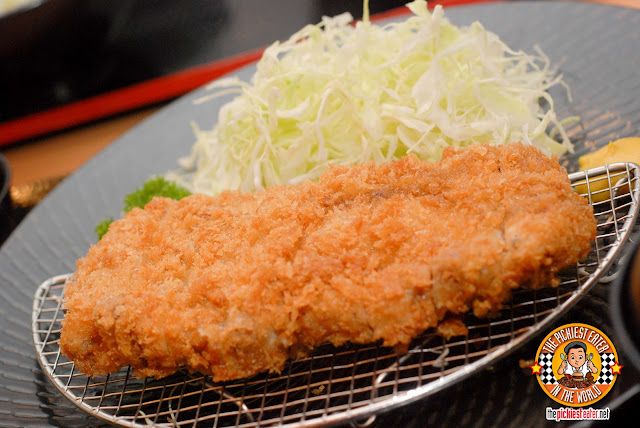 "Katsu" is actually an abbreviation of the word "Katsuretsu" (Gesundheit), which means "Cutlet". It also means "To Win" or "To Be Victorious", making it a tradition for students to eat it before an exam. Had I know that, perhaps I would've had this instead of the usual Spam before my trigonometry finals. 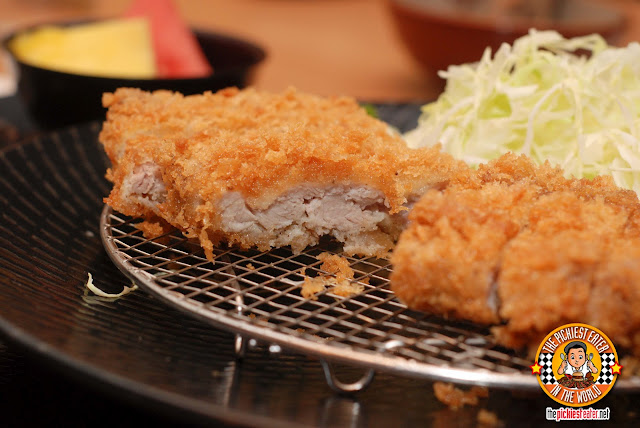 Prior to eating at Yabu, I had mentioned that Ma Maison had the best Tonkatsu's I've ever tried. But it's almost unfair to compare Ma Maison's version to Yabu's Kurobuta Pork rendition of Tonkatsu.

Kurobuta Pork is the "Black Angus" of the pork world, so in effect, it's like comparing a Black Angus cut of T-Bone to one you'd get from Batangas. The Batangas cut would be delicious in its own right, but the quality of the Angus simply smokes it out of the water.

Here, the Kurobuta Pork will leave you baffled on how a piece of meat, especially one such as pork, could be so tender. After taking a bite, the crunchiness of the coating enveloped a piece of pork, that was so unbelievably soft, I couldn't make out what was the pork and what was the rice!

This is definitely the Rolls Royce of Tonkatsu's. 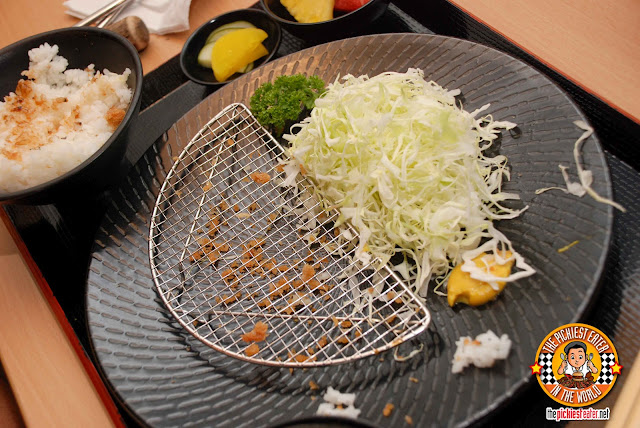 The only qualm I had with Yabu was.. well.. Let me put it this way. As soon as the waiter placed the platter in front of me, I said to Rina, "Watch I'm going to show you a magic trick.". Naturally, she was intrigued. After I demolished my Tonkatsu she asked me, "What was your magic trick?". I said, "I finished the Tonkatsu without touching anything else on the plate." She looked at my plate, and then looked back at mel, then I said an emphatic, "Tada!!".

She just shook her head.

What I'm getting at, is that it would be nicer if Yabu offered an option of a (forgive me for going all fast food sounding) less expensive "Solo Meal", without the pickles, Cabbage, fruits and soup. Come on, let's face it, what the hell am I going to do with "Unlimited Cabbage"? Unlimited Cabbage to me is just about as useless as wedding vows are to Kim Kardashian.

Admittedly, the prices, are quite reasonable for the quality that you get in return, however it wouldn't hurt to have an option without the "meal", just to make it more accessible to a wider market (but that's just me).

Apart from that, there's not much else I could say negative about Yabu.. the food was excellent, the service was fantastic, and we got our food at a reasonable amount of time. 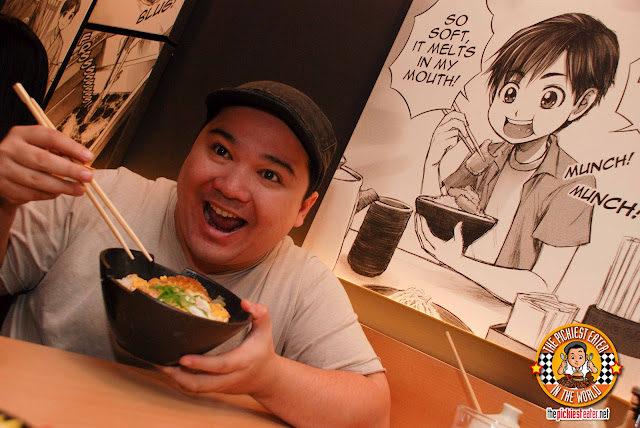 The waitresses were laughing at me when I was eating this bowl of Katsudon.. I don't get why... I couldn't help it though.. I told Rina, "Its so soft, it melts in my mouth.." *laughter again*
Posted by The Pickiest Eater at 11:45 PM