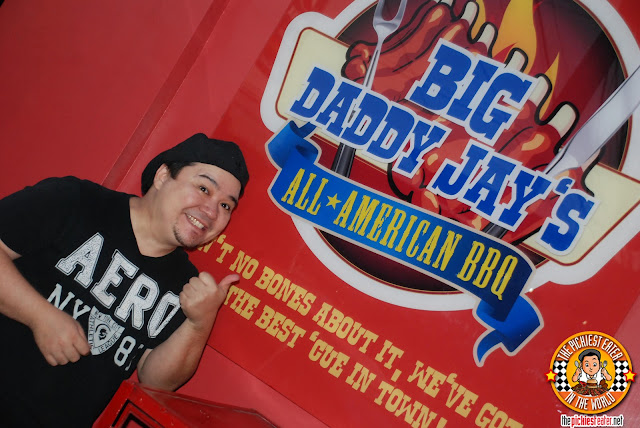 I really enjoy hearing about food success stories. Restaurants, such as Manang's Chicken, that began as humble food stalls in Mercato Centrale, and quickly evolved into a Filipino fast food Chicken powerhouse.

I would honestly love to see the same level of success happen to Big Daddy Jay's All American BBQ. I first discovered Big Daddy Jay's last year at Soderno, where I was immediately blown away by how incredibly tender their ribs were, and how every bite was packed with an intense smokey flavor. It's almost as if this is what all ribs want to be like when they grow up.

A few weeks ago, I found out that they had opened a little restaurant at the Cubao area. When I got an opportunity to visit them, I tagged my other blogger friends along with me, because I felt it was imperative that they get a taste of Big Daddy Jay calls, "The Best 'Cue in town".

And you know what? They really make a VERY strong case. 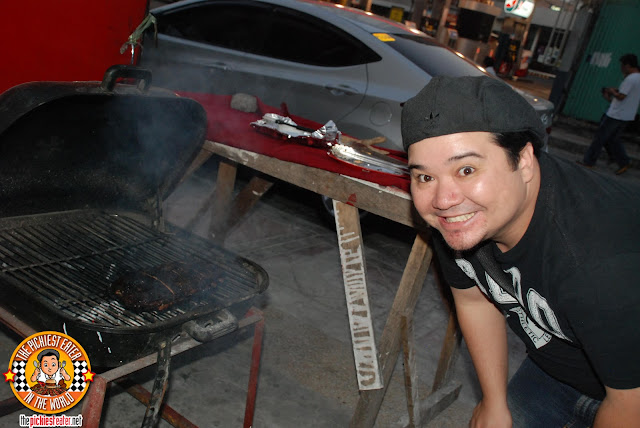 Big Daddy Jay's is a quaint little place along 17th Street in Cubao (Just go down P.Tuazon, past Ali Mall and SM Cubao, then turn right at The Caltex station), which officially opened their doors just this April 9. Just before we entered, we were greeted by a gorgeous slab of Ribs being grilled at the front. The smell of the cooked meat could be smelled a mile away. It was uncanny seeing how the people walking by couldn't resist turning their heads, searching for the source of the mouth watering aroma. 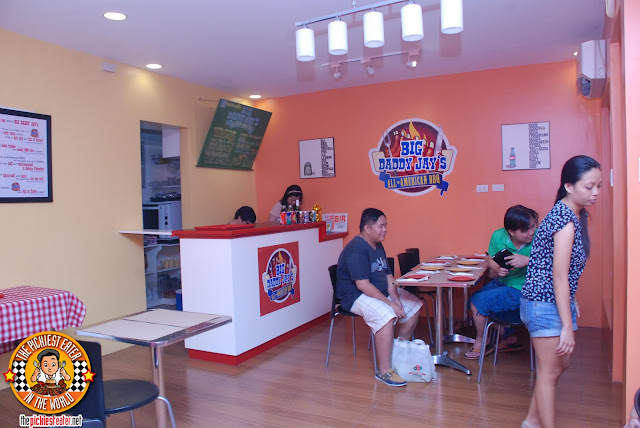 The place is simple, with a nice, homey ambiance, with the walls painted with soothing colors and adorable pictures and food related quotes. 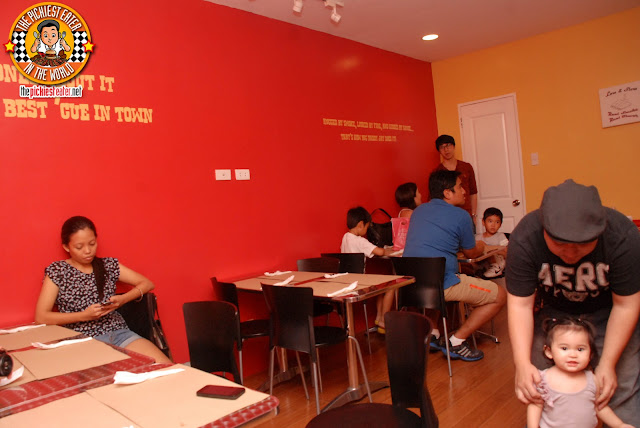 My little speedster. We started off at the center of the frame.
By the Time Rina clicked, she was almost out of the picture.

I was honestly expecting a really cramped little area, but much to the delight of Baby Rain (and the dismay of me and Rina), there was enough room for a little toddler to run around in. What was nice about it was that, even though the place was modest in size, you never really got the feeling of it being too cramped.

Before we got to the main event, They brought out some platters of the newest additions to their menu.. 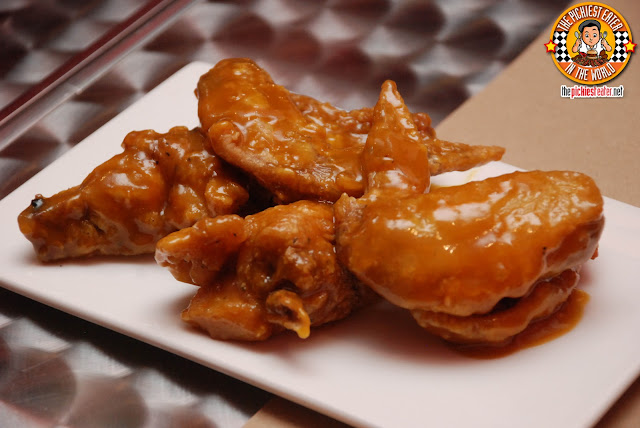 Starting with the Honey Mustard Chicken Wings (P120). This had a delightful crisp to the bite, and was coated with a luscious honey mustard sauce. it was a wonderful harmony of sweet and tangy. I think the next thing they need to do is make this available by the bucket (I'd bring my own orocan hehe). 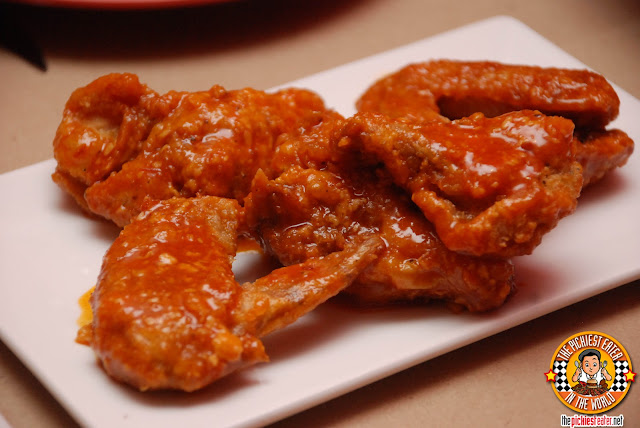 Another wing variant they served us, was the Buffalo Wings (P120). I'm not a big fan of Buffalo wings, but Rina has taken a liking to it. She was fascinated with how, despite the level of spiciness being a bit higher than her normal capacity, she couldn't stop eating it. It had just the right mix of acid and heat for her. Although admittedly, she had to chug down a glass of water after every bite. 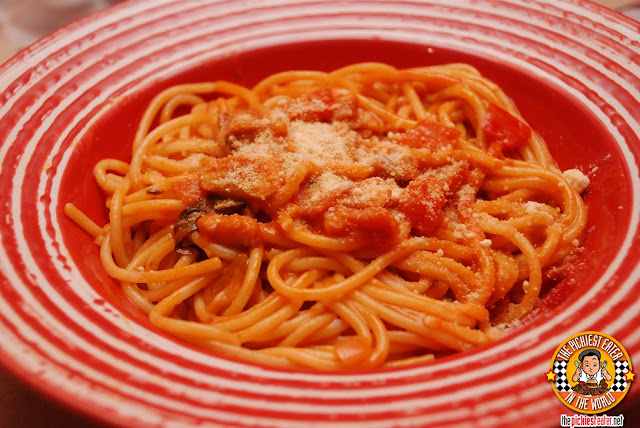 Even at this early age, Baby Rain is a huge fan of pasta, and Big Daddy Jay's Tomato Basil Pasta (P140) was no exception. I'll be honest with you, I refrained from trying it myself because of my aversion to anything with tomato (hyper acidity sucks), however, Rina tried it herself and found it just "all right". She said the noodles were cooked well, and the sauce had a nice tanginess, but nothing truly stand out. 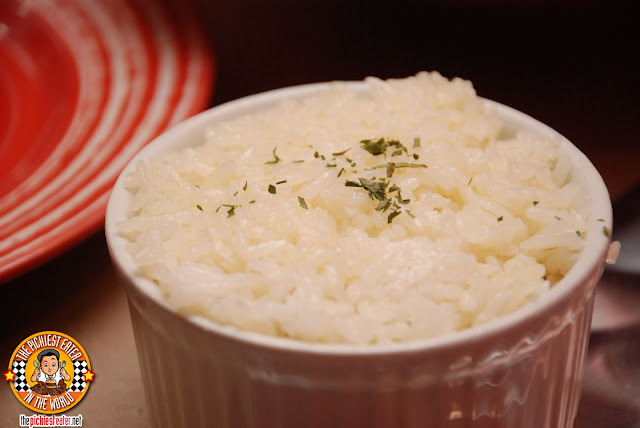 One thing you must not forget is to eat your ribs with a side order of buttered rice. I know it sounds like overkill but hey I can't help myself. It's actually just a simple dish of garlic fried rice cooked with a little bit of butter. I'll admit, one may find it a little bit on the oily side, but the creaminess of the butter blends well with the smoky flavor of the Ribs.. so that makes it all ok. 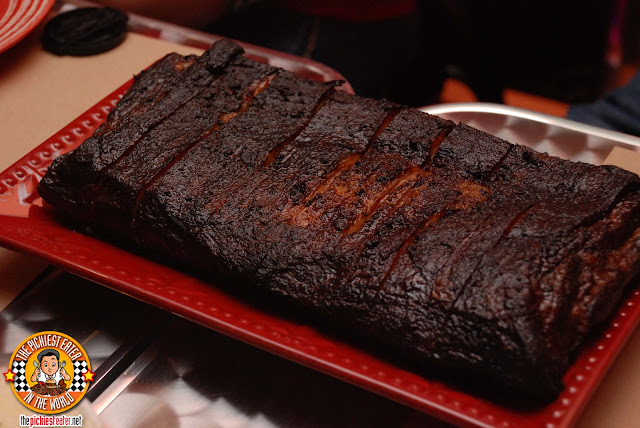 If our dinner to Big Daddy Jay's BBQ was a Pinoy awards show, the Full Slab of the Original Smoked Ribs (P790) would win the award for "Star of The Night". A lot of Smoked Ribs you get in restaurants here have their meat slathered in a thick coat of Barbeque sauce, that helps accentuate the flavor.

With Big Daddy Jay's Ribs, the sauce is on the side, but in my opinion, not absolutely necessary, because the flavor is deep set into the recesses of the meat. You're assured a swirl of smokey goodness with every mouthful.. with or without sauce! 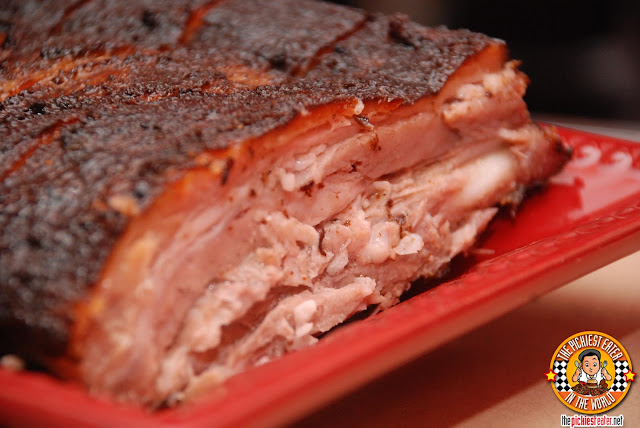 This was even more amazing than I remembered. I was tasked to slice off the rib for my friends, and the meat gave in with barely any resistance. Despite the blackened exterior, the meat itself was cooked to a healthy light color. The meat retained all juiciness and tore cleanly off the bone, even without the use of a knife. 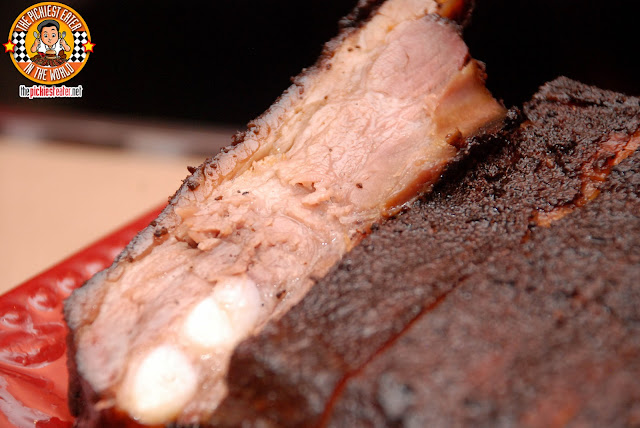 The lovely Ada, one of the owners of Big Daddy Jay's, explained to me that the name of the restaurant pertains to her American brother in law that taught them his recipe of Smoked BBQ Ribs. Cooking smoked ribs to him was so natural as it is for a pinoy to cook adobo. They customized their own smoker, and their ribs undergo an intricate "rub" of spices TWICE before being cooked - Which plays a huge part in the meat being packed with flavor. 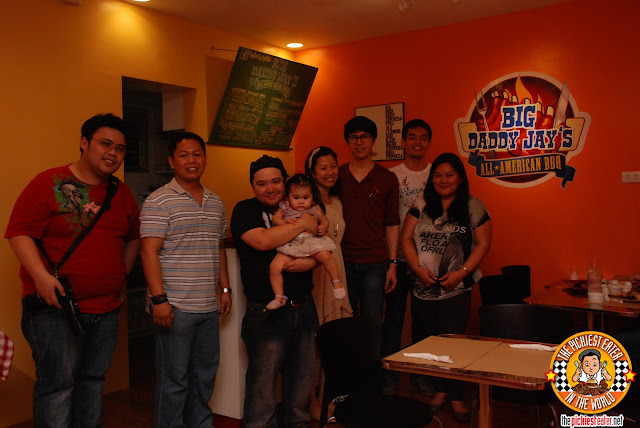 I would like to thank Arman, Ada, and Paul for their kind hospitality! Too bad Big Daddy Jay himself couldn't be there! I'm looking forward to going back more often for some of the best ribs in the metro! 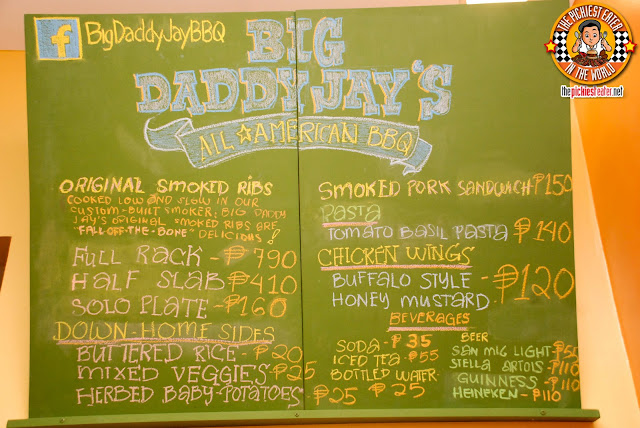