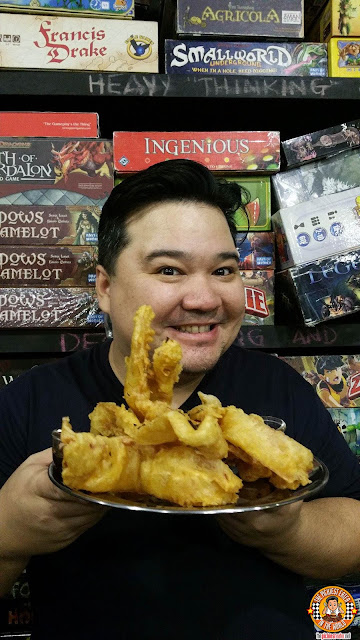 When I was a kid, I was totally into board games. Name it, I had it. Snakes and Ladders, Parcheesi, Sorry, Monopoly, Game of Life, and my all time favorite, Clue. Back in the day, playing any of those games were relatively simple. It usually involved the rolling of dice, perhaps a few cards, and moving of tokens around the board.

Today, Board Games aren't what they used to be. Admittedly, it's gotten a whole lot more complex, but the level of fun has also been taken to new heights. Game play has become wackier and far out, with objectives becoming more challenging than ever. With board games emerging as an alternative source of entertainment, venues have been sprouting up around the metro, catering to barakadas looking for a place to play a few rounds. Not only do these board game cafes serve as a venue to some serious gaming,

The latest Board Game Cafe that I visit just happened to be Dyce N Dyne, which is perhaps one of the hottest hangout spots in the restaurant scene today! 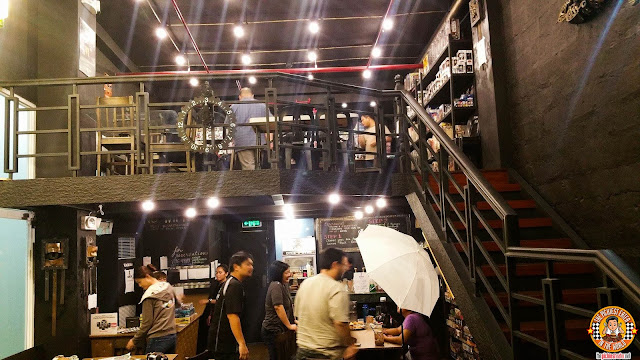 Located at Elements Building along Pasig Boulevard (Not too far from my place!), Dyce N Dyne has sort of a steam punk feel, perfect for getting yourself into gaming mode. You have an extensive selection of board games to choose from, so you are guaranteed to have an awesome time. 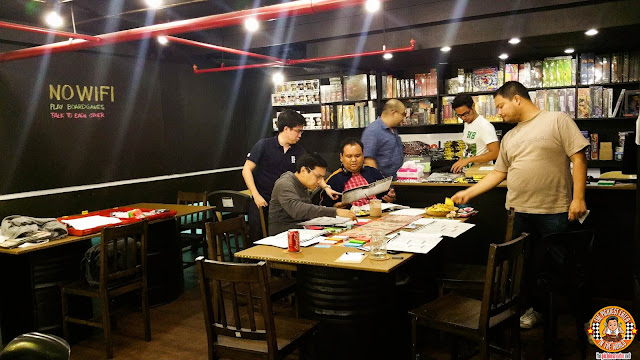 On top of the loft type area is the headquarters of Gaming Library, one of the top board game distributors in the country today, so don't be surprised if Dyce N Dyne gets first dibs on some the newest games out there. 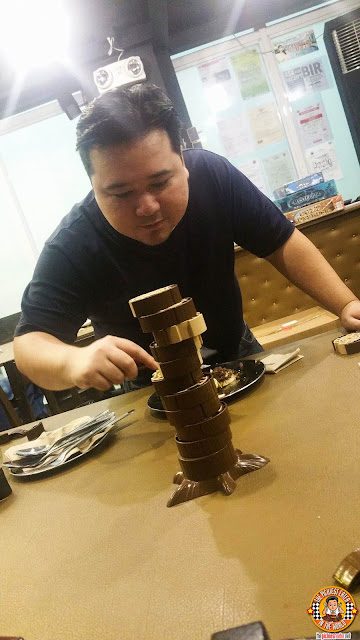 Some of the games we played were Click Clack Lumberjack, Cards Against Humanity, and so many others! It was an absolute riot!

I knew that I would enjoy playing board games with my friends, but would the quality of food keep up with amount of fun being had?

I am proud to announce that - in my honest opinion, Dyce N' Dyne's food kicks ass! 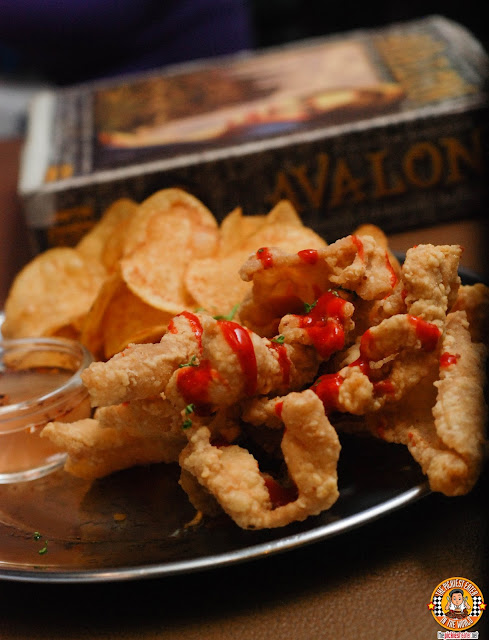 Our meal began with Dyce N Dyne's Chicken Skin of Avalon (P150), which totally exceeded my expectations. Beautiful cuts of chicken skin are dusted in a light bread coating and dropped into a deep fryer, then transformed into strips of crispy deliciousness. The skin is then gently drizzled in a Buffalo sauce that gives an added punch of tangy flavor to it. The crunchfest continues with the delicious side of Homemade Potato Chips. It also comes with a side of vinegar, however for me, the Buffalo sauce was more than enough. 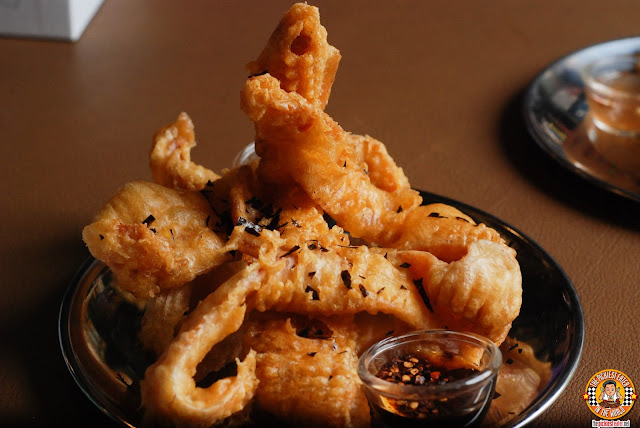 As a Bacon fanatic, I was ecstatic to try the Bora Bora Bacon Tempura (P350)! Strips of Bacon, coated in a tempura batter and deep fried to a golden crisp, sprinkled with bits of nori for a bit of a and served with a side of Maple Syrup, that was peppered with a little bit of chili flakes for added oomph. 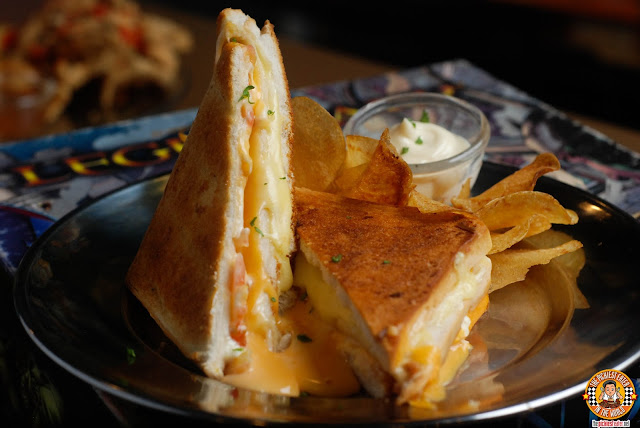 The Legendary Grilled Cheese Sandwich (P150) is the epitome of beauty in simplicity. A blend of two different cheeses, mixed with tomato slices, laid out between a pair of gorgeously toasted slices of white bread. 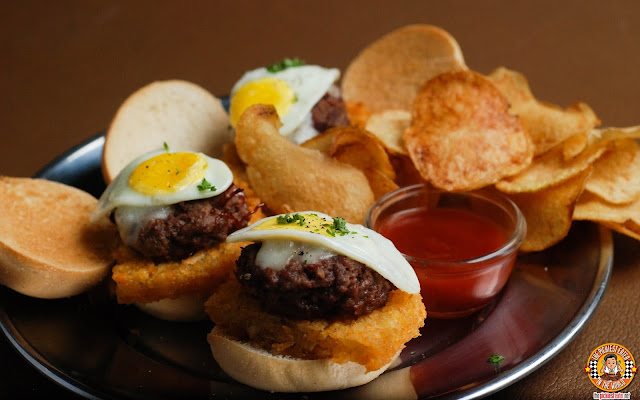 The Munchkin Sliders (P250) was right up my alley. I'm an absolutely breakfast foodie junkie so I really got a kick out of these mini burgers, Mini Corned Beef Patties are perched on top of a small hash brown bed, and topped with a sunny side up Quail Egg. 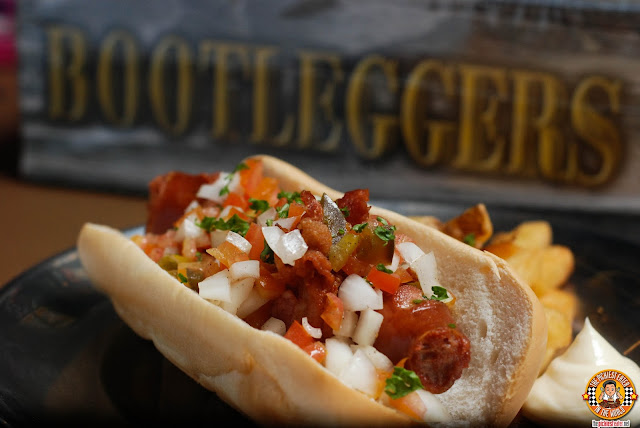 When we arrived, our fellow KTG member Joko was scarfing down the Bootleggers Hotdog (P200). With a bacon wrapped Hungarian Hotdog tucked between a nicely toasted bun and given added vibrance with its salsa topping, we were thankful we were able to separate her from the sandwich long enough to take a picture! 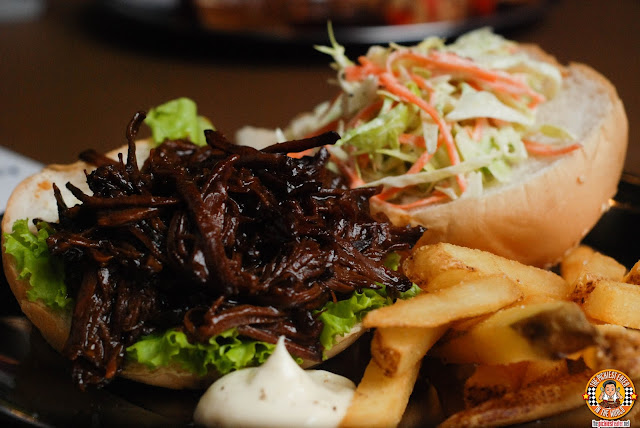 We were entreated to two dishes that weren't on the menu yet at that time, but might be there already as of this writing. The Code Names Pulled Beef Sandwich was an absolutely delight. Served with hand cut french fries, Dyce N Dyne eschews the traditional use of pork and uses beef in re-creating a spin to this Southern classic. The tanginess of the pulled beef is beautifully restrained by the creamy coleslaw topping. 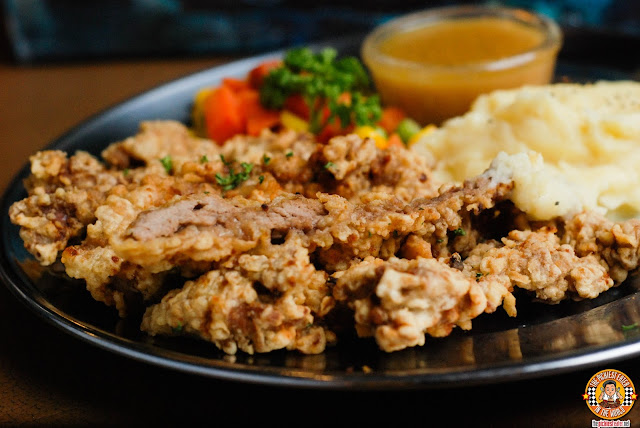 Another new dish with Southern roots was the delicious Mysterium Chicken Fried Steak. A steak cutlet is pounded to a near flat state. breaded and deep fried.The meat was seasoned just right, and worked wonderfully with the silky mashed potatoes and rich gravy. I have a feeling many customers will be eating this with rice! 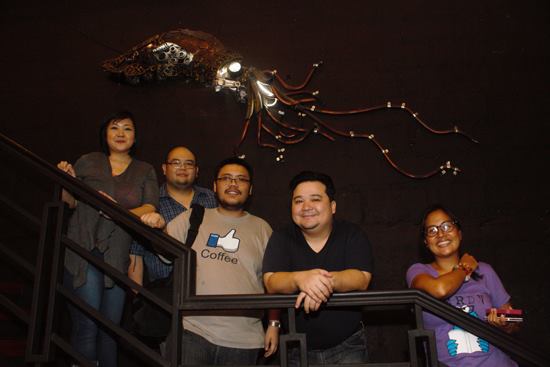 At the end of the evening, we couldn't resist getting a photo op with the Squiddy hanging on the wall! Undoubtedly loads of fun to be had at Dyce N' Dyne! With so much more mouthwatering items on the menu, not to mention a whole slew of board games to try, I can't wait to go back soon!

Posted by The Pickiest Eater at 1:58 AM

Email ThisBlogThis!Share to TwitterShare to FacebookShare to Pinterest
Labels: Board Game Cafes in the Philippines, Dyce N Dyne, Pasig restaurants