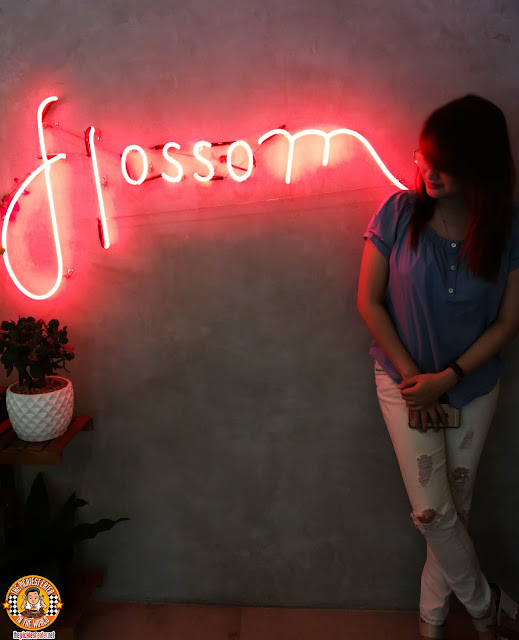 There is something undeniable charming about neighborhood cafes. That homey feel and relaxing vibe is something that I look for, apart of course from incredibly delicious food. I just recently discovered an adorable little bistro that opened just a few months back, that checks all the boxes in what a neighborhood cafe should be.. Flossom Kitchen & Cafe. 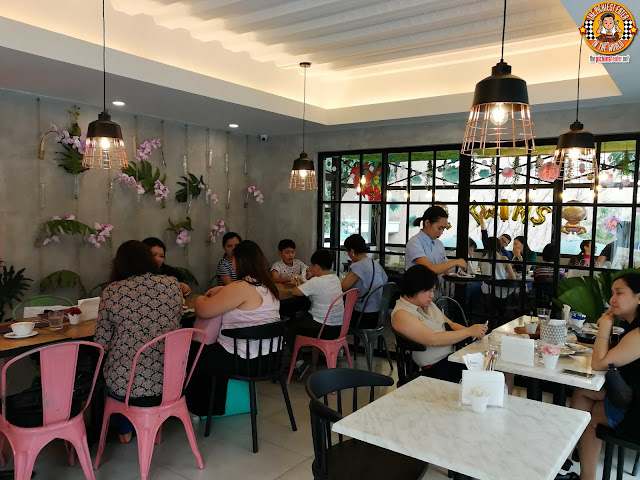 Nestled in the heart of San Juan, Flossom Kitchen and Cafe invokes a pleasant ambiance that makes it the perfect place for family dinners, or even romantic dates. Regardless of why you go there, one thing for sure is, you're in for an amazing meal. 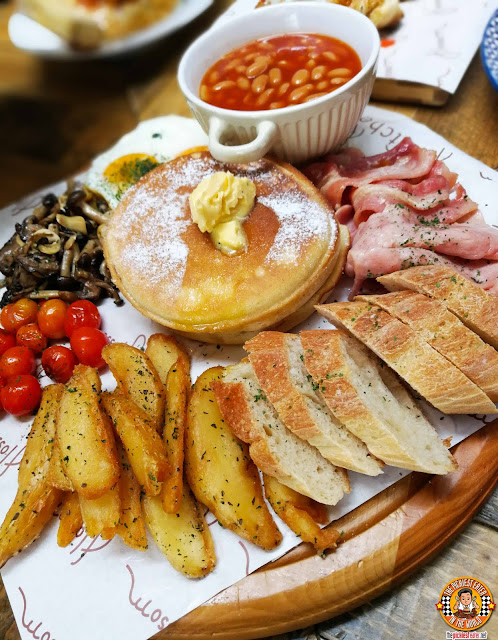 Our began with the most important dish from the most important meal of the day.. The aptly named, Ultimate English Breakfast (P650). I gotta say, them Brits sure know how to have breakfast! Picture this: Strips of Bacon slices, thin cuts of Ham, Potato Wedges, Baguette Slices, a short stack of Pancakes, Two Eggs, Baked Beans, with a side of Cherry Tomatoes & Wild Mushrooms.

Our Host said it was good for two but I don't know.. I'm pretty sure I could take on this bad boy myself.. with the exemption of the Tomatoes, of course. 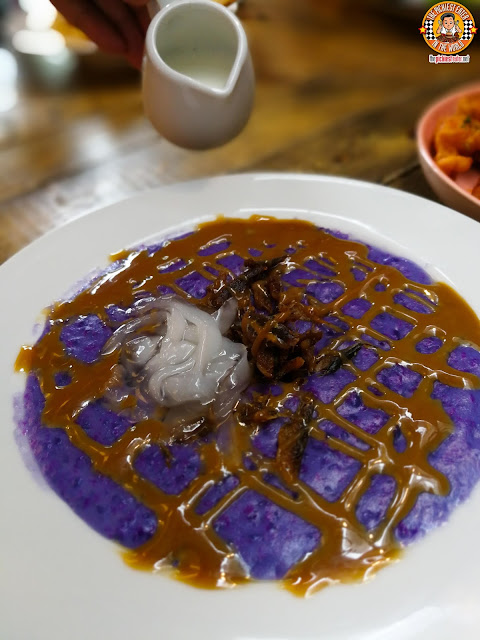 Next, we had a champorado dish unlike any I've ever had before.. Ube Champorado (P280). The popular breakfast rice porridge dish is infused with the distinct flavor of Ube, and topped with Macapuno and a Drizzling of Yema sauce, then speckled with bits of salted fish flakes, which prevents the dish from becoming too overly sweet. This was nothing short of spectacular. 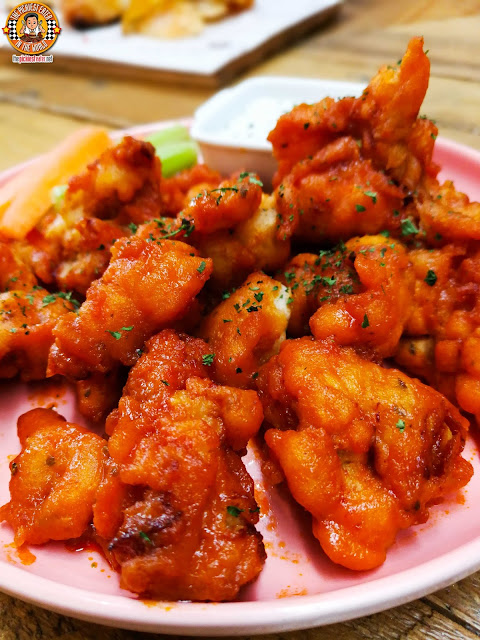 From the appetizers menu, our hosts brought out the Spicy Buffalo Chicken Tenders (P280). Boneless chicken strips are coated and deep fried, then glazed in a vibrant Buffalo sauce that offers a nice kick of heat, that is tempered when paired with the Bleu Cheese dip. 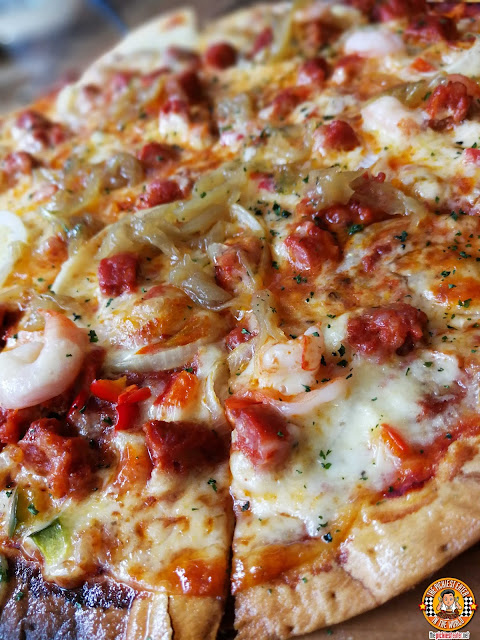 Flossom Cafe also has a wonderful selection of pizzas. The first one I tried was the delectable Chori Shrimp (P550). The crisp dough was lined with incredibly flavorful Tierra Chorizo Bilbao, bits of Fresh Shrimp, Caramelized Onions, Garlic Tomato Sauce, and gooey Mozzarella 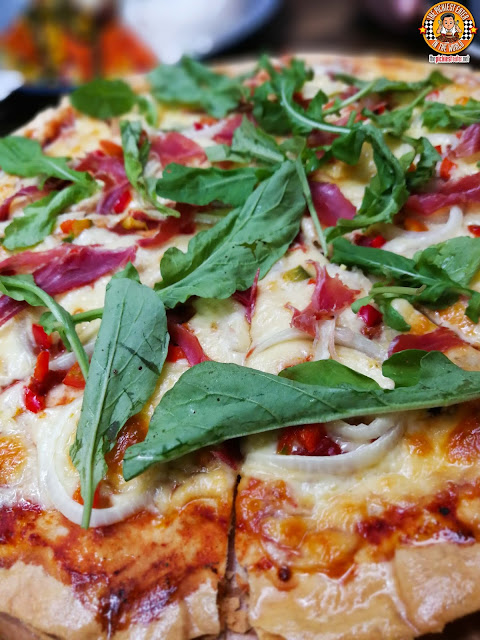 Another pizza we sampled was the Jamon Serrano and Arugula (P550). The Spanish Jamon had a sharp savoriness to it, and was complimented by the Sauteed Bell Peppers, Onions, Garlic Tomato Sauce, Mozzarella, laid out on a crisp pizza crust. 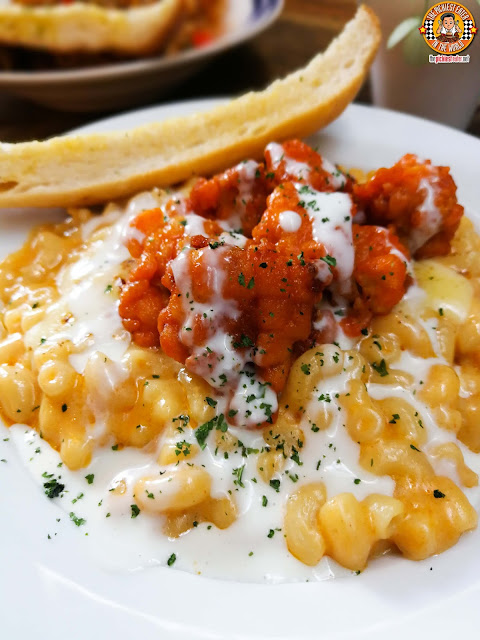 For the pastas, we tried the Buffalo Mac and Cheese (P320). The pairing of Buffalo Chicken Strips and creamy Mac and Cheese was indeed a match made in heaven, however I would ask them to keep the Bleu Cheese sauce separate next time for people like me who aren't too fond of its pungent flavor. 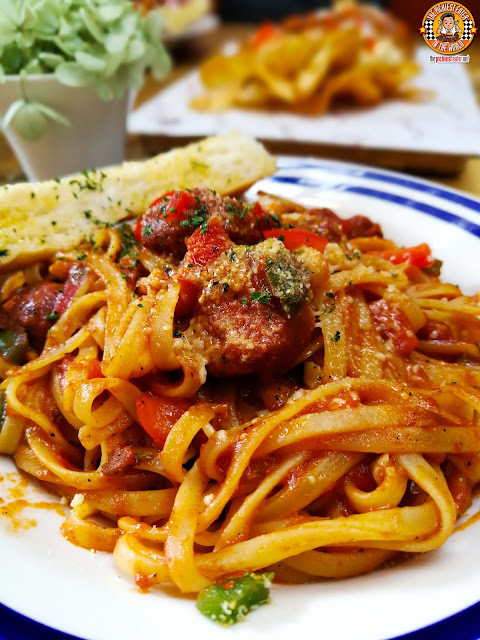 I'm normally adverse to tomato based pastas because of my hyper-acidity, but the Honey Chorizo Pasta (P320) was just too good to pass up. Using al dente Linguine noodles and a red sauce blended with Tierra Chorizo Hubad, Garlic Confit, Bell Peppers, and drizzled with Spiced honey for a gentle touch of sweetness, perfectly balancing the acid from the tomato sauce. 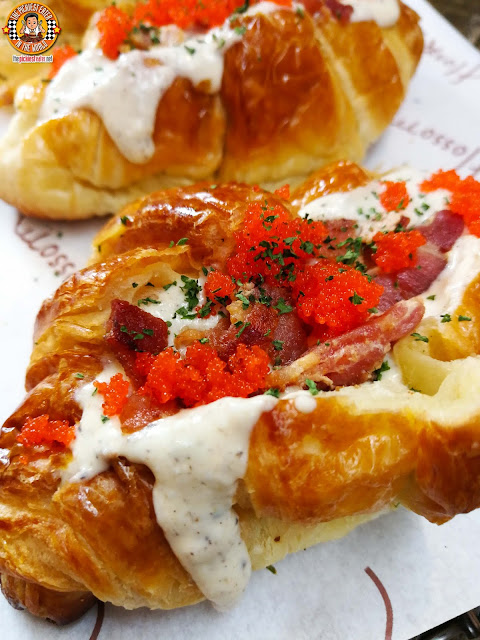 Croissants are one of my favorite things in the world, so when I saw the Truffle and Egg Sandwich (P300), I was immediately intrigued. Tucked neatly inside the flakey, buttery croissant, was a creamy Egg Salad, bits of Truffle, then topped with crumbled Bacon and Fish Roe.

You wouldn't think the individual components would work together so cohesively, but it does make for one amazing sandwich! 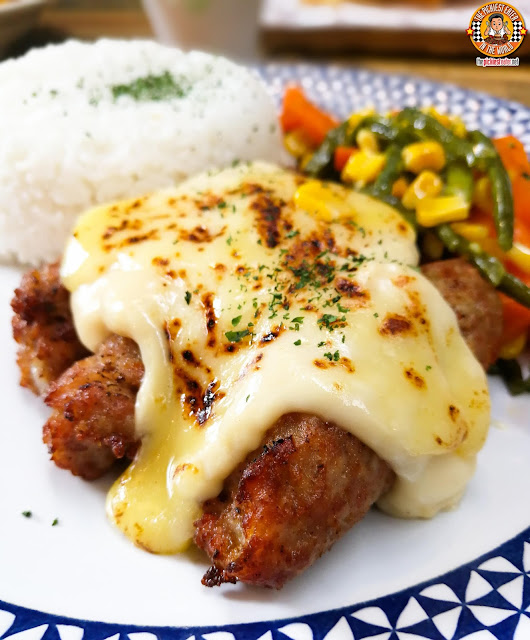 From Flossom's entrees, we were served the Baked Meatloaf (P320). Flossom's version of Embutido, which had a mouthwatering meatiness to it, was doused in a luscious cream sauce, and blanketed by a thick layer of mozzarella cheese. This dish was not only delicious, but had a nice comforting feel to it as well. 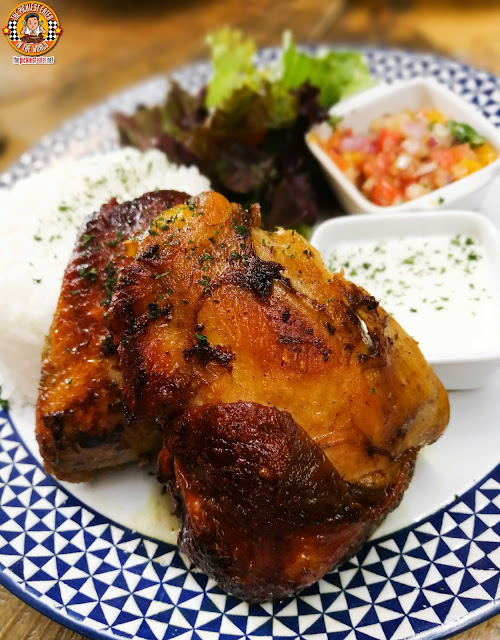 Next, we had the Asian Chicken (P350). The succulent chicken thigh was basted in an unmistakable Asian zing to it, which paired delightfully with the side of Pico De Gallo and Onion Cream. 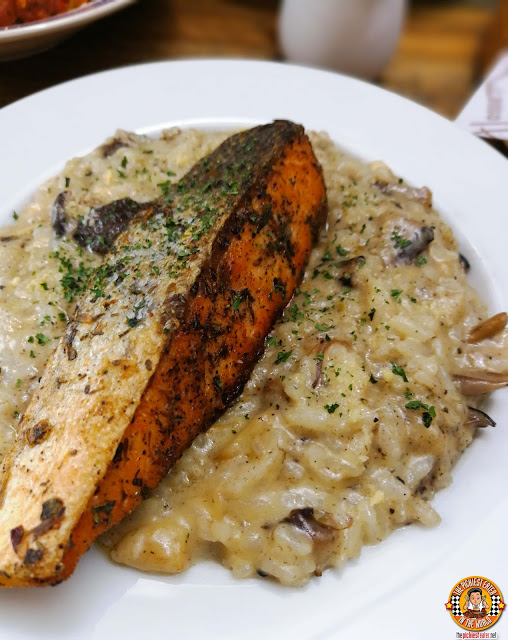 When I take Rina to Flossom, I'm fairly certain that she'll order the Mushroom Truffle Risotto (P420, Plus P250 for to add Salmon), and truthfully, I wouldn't blame her. The silky texture of the Risotto itself was exquisite, with the fragrance of the truffle further accentuating the earthiness of the medley of mushrooms, and the Parmesan cheese bringing everything together masterfully. 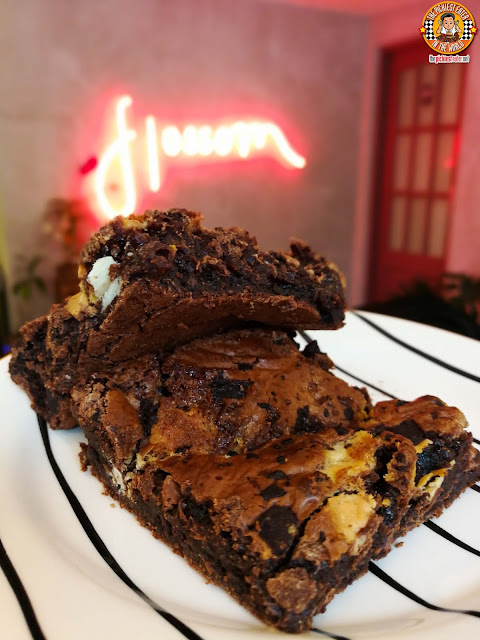 Not only is Flossom's food amazing, but their desserts are absolutely spectacular. Their Brownies have that gooey, fudgy-ness that I look for when judging brownies. 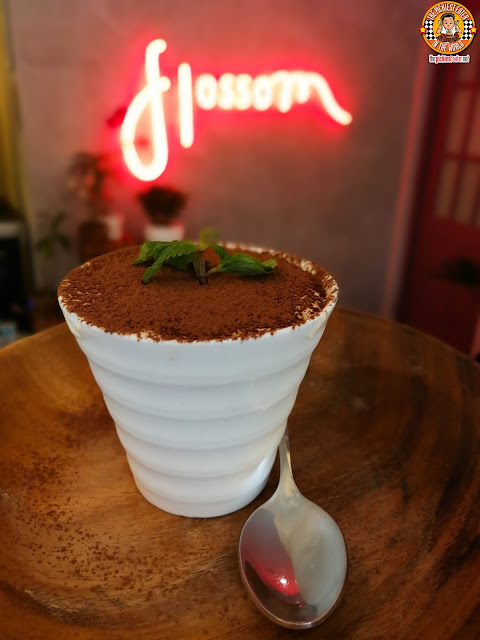 As a non-coffee drinker, I enjoyed how the espresso in the Tiramisu wasn't too overwhelming, with the creaminess of the Marscapone Cream complimenting the Lady Fingers, and the cocoa powder providing a nice balance. 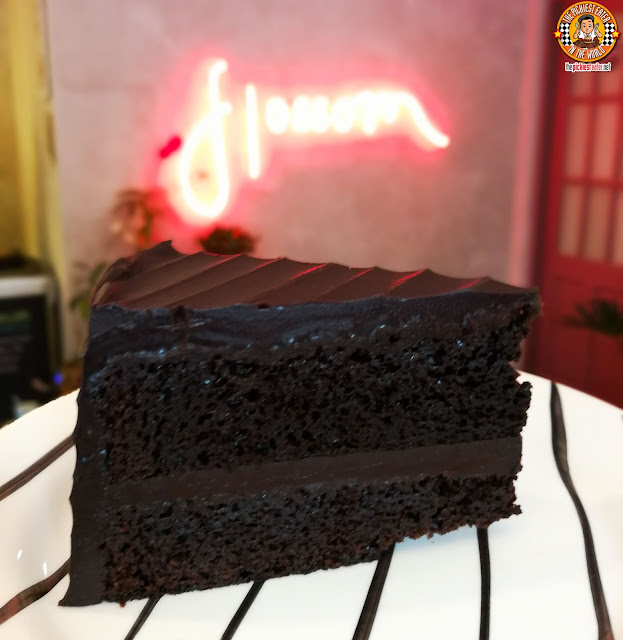 Chocolate lovers will undoubtedly go nuts over the Chocolate Ganache Cake. The cake had an unreal moistness, without bombarding your taste buds with sweetness. 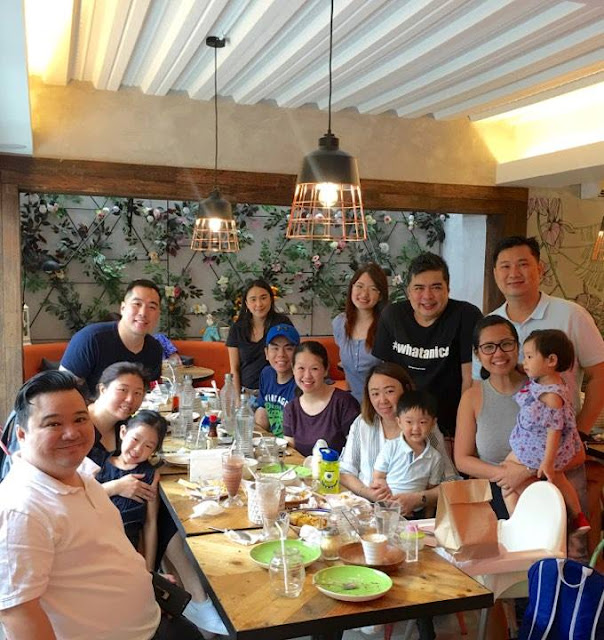 It was a fantastic lunch with the KTG, as we felt right at home at this charming cafe. Flossom Kitchen and Cafe has instantly vaulted itself to among my favorite new restaurants!

I cannot stress enough how highly I recommend this restaurant! 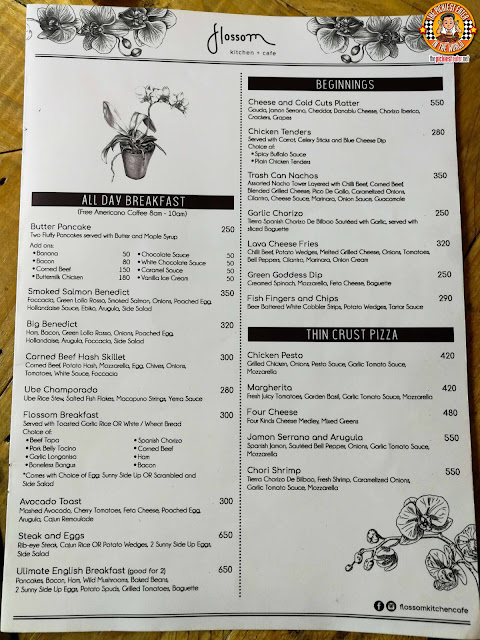 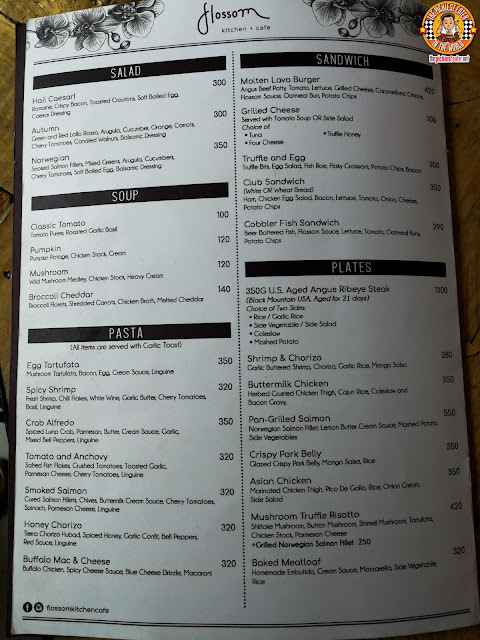 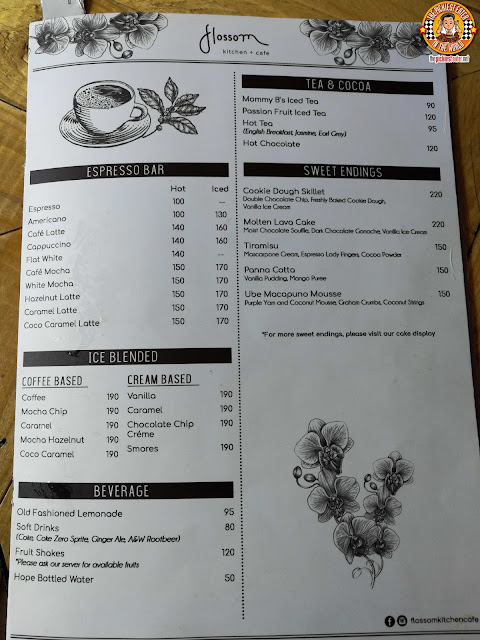 Email ThisBlogThis!Share to TwitterShare to FacebookShare to Pinterest
Labels: Flossom Kitchen and Cafe, Where to Eat at San Juan