A DAY IN THE LIFE PART 3: THE YAKIMIX INVASION 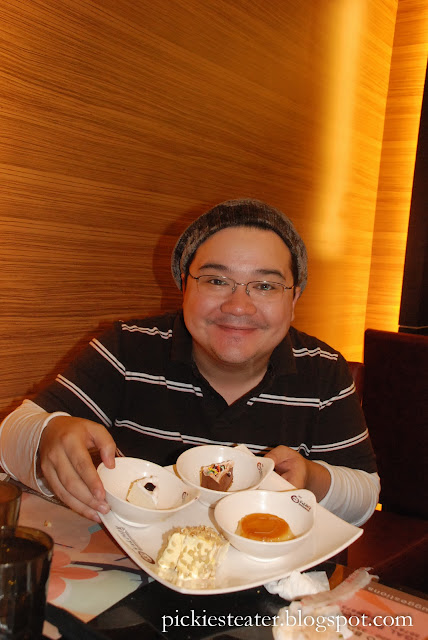 
One fine day in the office, I saw Audrey, a friend of mine from the office, researching on "Yakimix". What started her interest, I have no clue, but when I heard her talking about going to visit the recently opened Greenbelt Branch, I knew I wanted in.

I'm usually not a fan of those places where you have to grill your own food, because the smell gets all over your clothes, and when I pay to eat in a restaurant, I expect THEM to do all the work. Otherwise I should've just eaten at home.

Its difficult to make definite plans with my office friends because we never really get off work at the same time. There's always someone with a client that's still there when everyone else is ready to go. We set a night for everyone to go, and said that if everyone is free, we would go.
During that night, we were waiting around for our respective clients to leave, someone realized that almost everyone was done with their tasks, and it was just about the time to go home.

Finally, our dream to invade Yakimix would become a reality.


I had lived in Makati for two years, and would frequent Greenbelt practically every weekend, so I find it funny that I don't remember what used to be in the spot that Yakimix used to occupy. (Then again, with my memory, i guess it's not much of a surprise) Regardless, I was really surprised with how huge the place was. 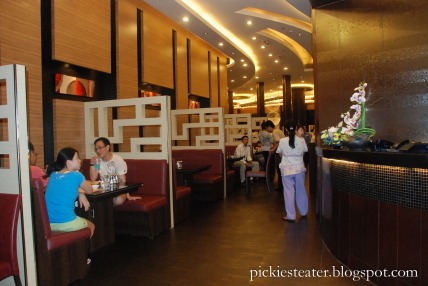 Walking in, it doesn't look so big...

The place really impressive, and could stand toe to toe with the restaurants of any five star hotel here. Though we were a big group, we were seated immediately, (probably because we got there past 8pm). But nevertheless there was a considerable amount of people - especially considering that the huge ballroom sized area was pretty much full. 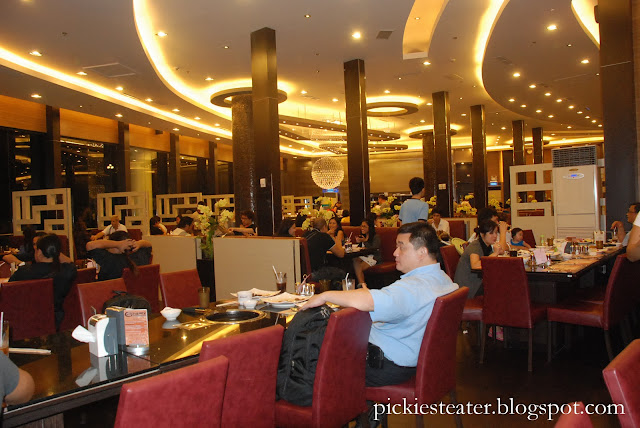 Rina wasn't with me, so I had some struggles with the camera. It was then that the waiter told me that I wasn't allowed to take pictures of the food. Which I told him was a strange rule. I asked him if I was allowed to take pictures of the food at my table, and he said, "Yes". So I asked him what the difference would be? And he looked baffled as well, and just apologized, saying it was the company policy. 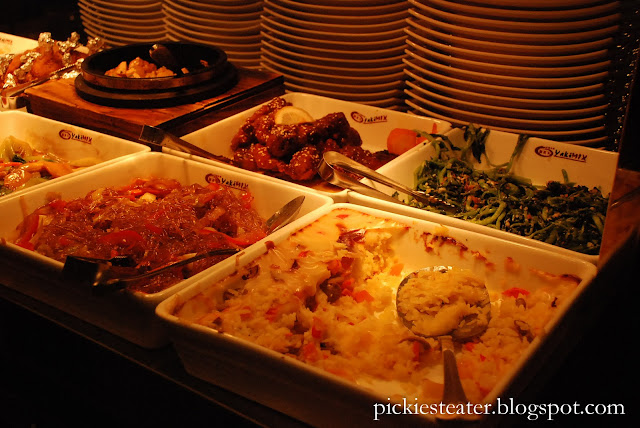 Like "Tong Yang Shabu Shabu Restaurant", Yakimix has a raw section for food you'd like to grill in the hot plate at the center of your table, and a traditional dinner buffet. But unlike "Tong Yang" The selection of buffet items are plentiful and really kick ass. 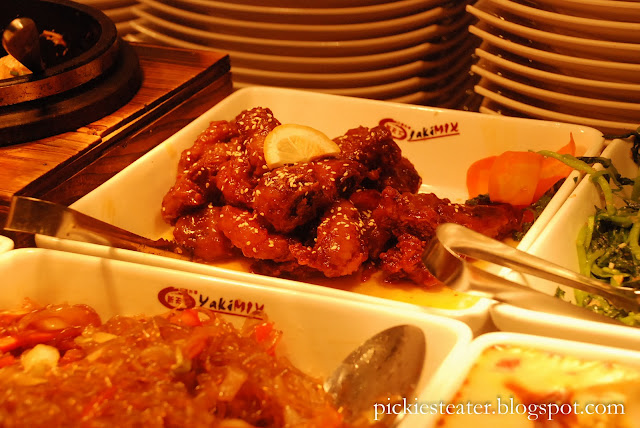 Honey spareribs.. could smell it a mile away.. 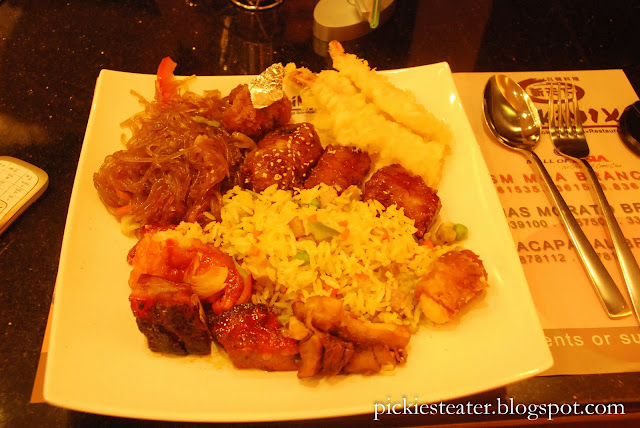 My plate consisted of (Clockwise, From Top Left) Chap Chae Noodles, Chicken Lollipops, Honey Garlic Spareribs, Shrimp Tempura, Bacon wrapped Crabstick, Grilled Pork Belly, and Pork Asado, with Yang Chow Fried Rice in the center. I ended up giving the Bacon with crabstick away. I don't eat crabstick, but i instinctively put it on my plate as soon as I saw it was bacon. 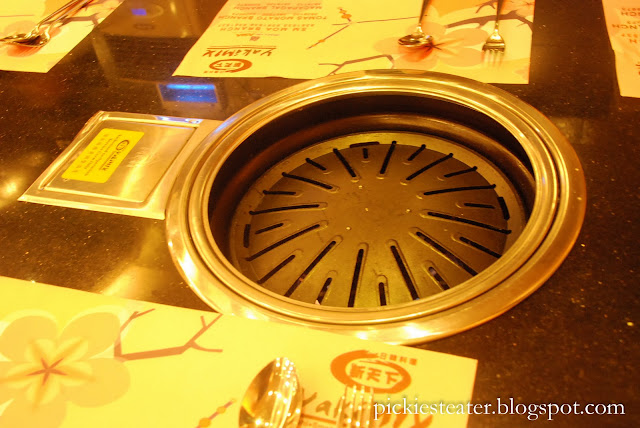 Smokeless means you leave with your shirt, "Smell-less"

Yakimix's grill claimed to be "Smokeless" and lo and behold, it was! Although I did miss being able to slather as much butter as I wanted on the hot plate, it was a small price to pay to make sure I don't leave smelling like fried beef. 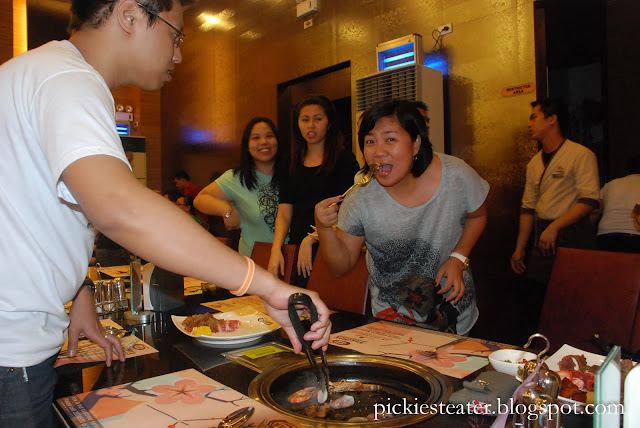 Because I fully loaded my plate with previously cooked dishes, My friends handled the grilling part. As soon as they arrived, Jerwin took the reins, and Naomi started eating. 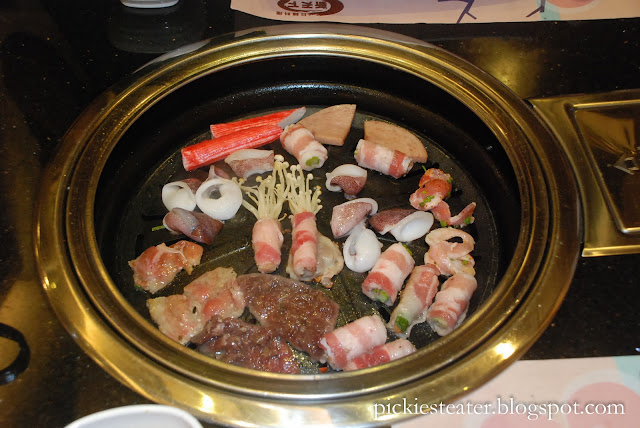 The beauty of Yakimix is that they have so many dishes that are wrapped in bacon - or different cuts of meat that look like bacon. My personal favorite was the sliced beef with black pepper. 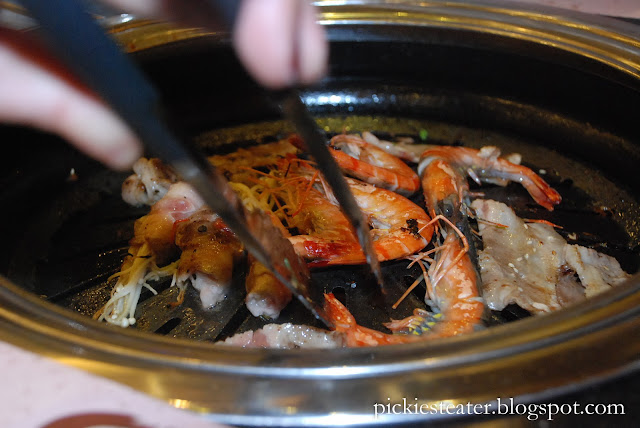 The shrimps cooked up pretty fast

They had a fine selection of seafoods to choose from, with shrimps, and squid a plenty.Of course I stuck with the meat. 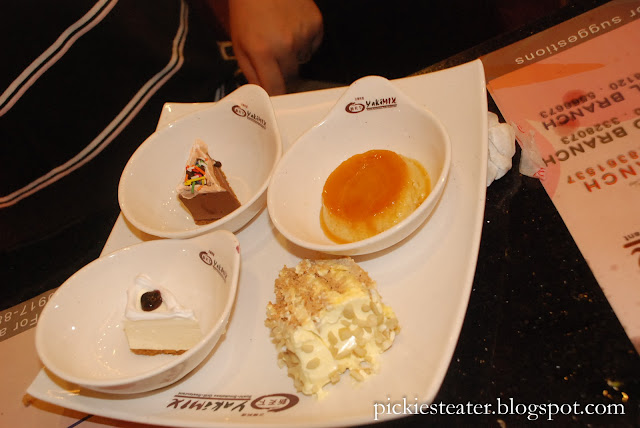 End it with the sweets

The desserts weren't really anything spectacular, although the presentation was hotel buffet quality.

The chocolate mousse (Top Left) was bland, the Leche Flan (Top right) had so much bubbles in it. The Blueberry Cheesecake (bottom left) was also bland with a weird texture, while the Sansrival (Bottom right) was the best among the rest. Buttery with the right amount of sweetness. They also have an ice cream selection, but again, you can get ice cream at the nearest 7-11.


And just like that, Yakimix is suddenly one of my favorite restaurants to pig out to. at P580 for all of this, that's a steal! In fact, i'm going back tonight to take Rina hehe..

What a way to end the day, huh? 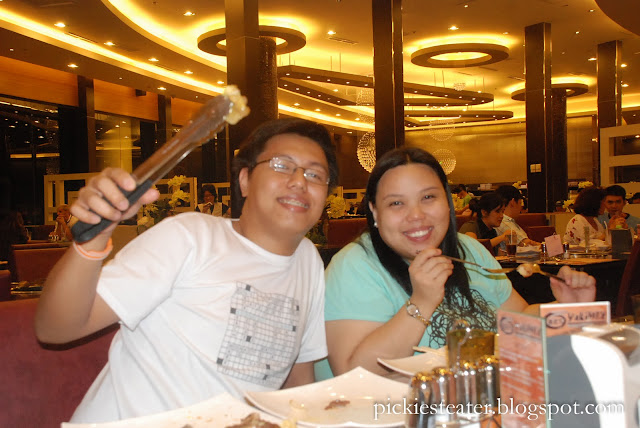 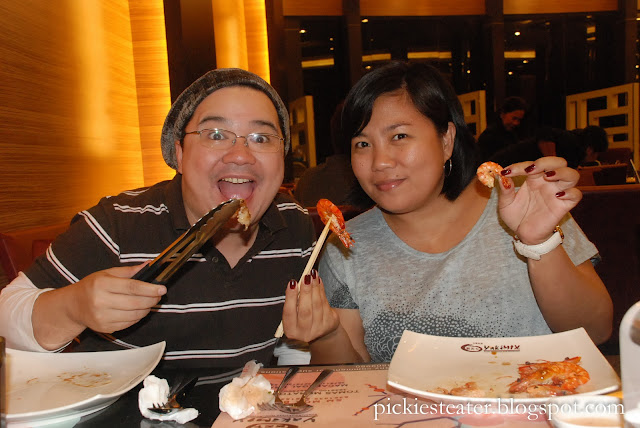 Me and Naomi.. Bacon for me, Shrimp for her.. 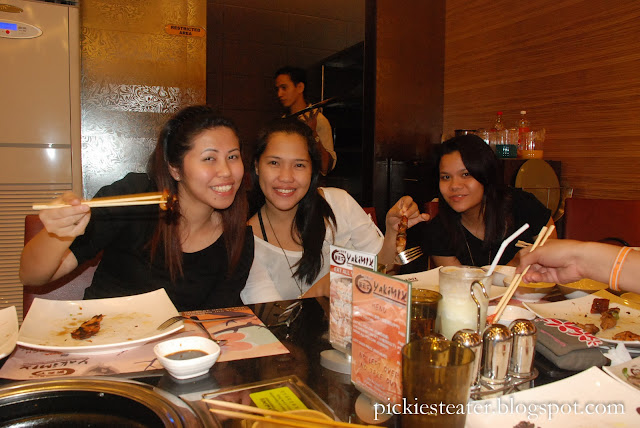 Dimpy, Audrey and Cathi pigging out 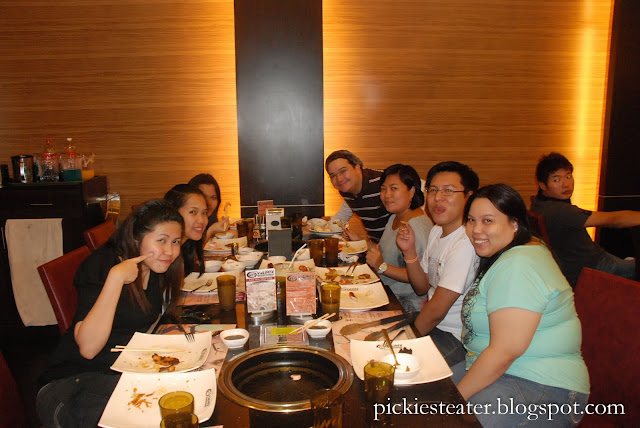 I love how the guy behind me can't stop checking out Naomi.. iba talaga ang powers..

Posted by The Pickiest Eater at 7:15 PM