THE BORACAY CHRONICLES: RAIDERS OF THE SEA BREEZE CAFE 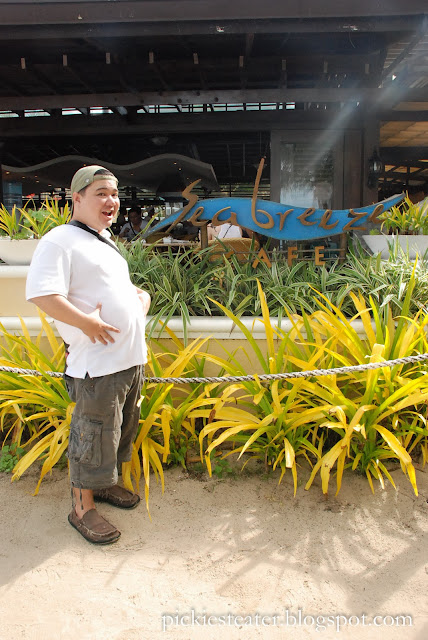 I swore that before the our Boracay trip ended, someone's gonna get pregnant.
This wasn't what I meant

I've said it before, and I'll say it again. I'm a sucker for breakfast food. I'm easy to please, what can I say? Since we were going to be arriving Boracay early in the morning, I knew that the trip wouldn't get off to a good start if I didn't immediately get some food into Rina's tummy (She one of those people who gets really grumpy when she's hungry hehe). Good thing my friend Rain (and fellow breakfast food junkie), gave me the heads up on the breakfast buffet of the Sea Breeze cafe at the Boracay Regency.

After arriving at the sunny shores of Boracay, at around 6:30 am, and we were famished. Rina had worked till 2am, meaning she didn't get any sleep anymore, except perhaps a little bit on the plane. I knew that if we took a nap, we wouldn't wake up anymore, so from our hotel, Residencia Boracay, we put settled in our stuff, and grabbed a tricycle to the Regency.

The Boracay Regency is one of the more upscale hotels in the island, so you can imagine how shocked I was to have what Rain told me confirmed by the hostess upon greeting us.. Breakfast Buffet was only P400 bucks!

Before you go any further, let me be straight with you all. This post isn't for people looking for quality food. Don't get me wrong, The food was fine, but your standard issue breakfast fare doesn't exactly require a master chef to prepare. I'm talking about oily, greasy, artery clogging-fried awesomeness, all served up in chafing dishes for the world to enjoy. Just the way I like it. 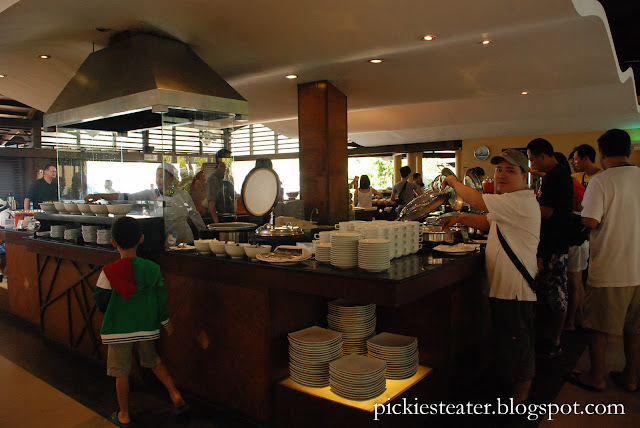 I told Rina we'd take some pictures before we eat.
She turned around and was surprised to see me in line. She was not pleased.

The Sea Breeze is a comfortable open air cafe by the beach front of the bustling station II. It was a warm morning that we got there, yet I didn't seem to feel the heat, which is unheard of for me. (maybe I was distracted by all the food). They stuck to the tropical decors, but added a notably modern feel to it. Rina had the camera most of the time, but If I was taking picture, I probably would've added a couple of shots of the waitresses in the ultra short minis hehe. 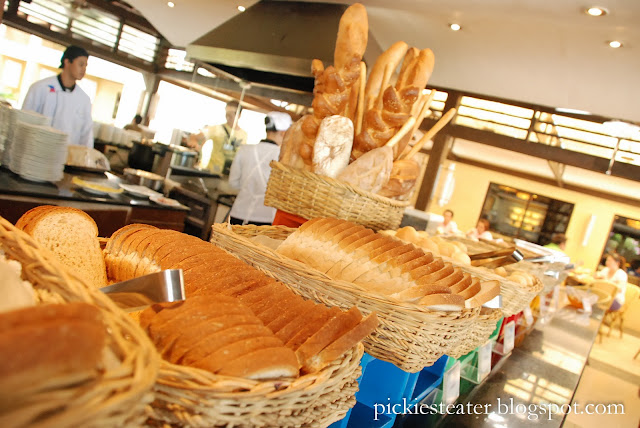 The bread section was mediocre

The breads section offered a wide variety of breads to choose from, but I wasn't too impressed with their resident baker The croissants in particular were really hard and dry. None of the soft flakiness that croissants should have. Among the other bread selections, none really stood out, but one did get my attention.. 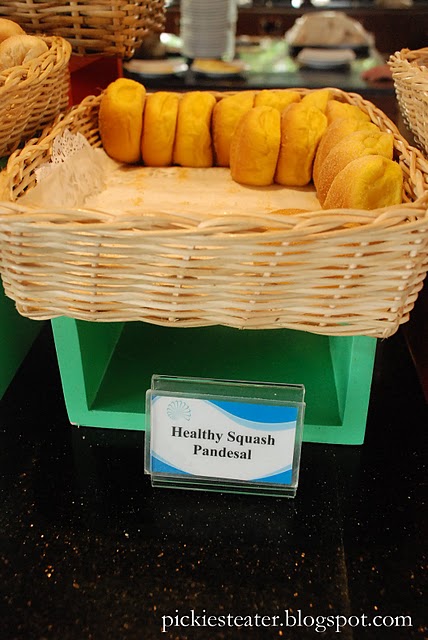 This caught my attention

Not so much attracted to it because of the "Healthy" Connotation, but more intrigued by the fact that it's bread made out of squash. It was a nice novelty to have in a buffet, and it was actually quite tasty, but not much different from Cheese bread you can by at any local bakery. When it boiled down to it, the bread section was pretty mediocre, and not worth wasting the stomach space in a buffet. 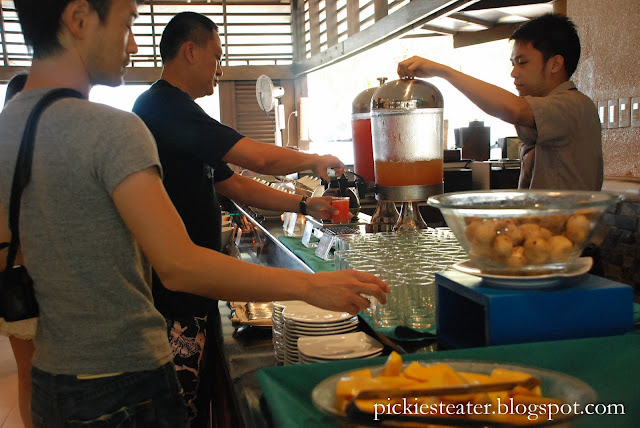 Not much choices on juices either

The juice selection wasn't anything to crow about either.. Watermelon Juice and Pineapple-Orange. I Didn't get to try the omelet station, because the scrambled eggs were good enough for me. Rina also tried the french toast and the pancakes. I took a bite from hers, and it tasted awfully weird. Maybe it was the syrup, but it had a weird medicinal taste to it. 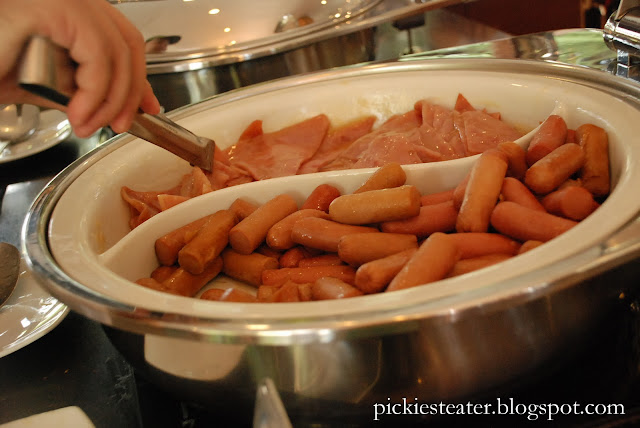 The Ham was great, but the sausages were just little hotdogs.

Among the aforementioned items, it was the last four that were quite delicious. But then again, quite hard to go wrong with. Though I was modestly content with what I got, As I turned the corner of the buffet line, I turned around the corner and found the game changer.

THE PICKIEST EATER IN THE WORLD HITS THE BORACAY REGENCY'S SEA BREEZE CAFE from richiez168 on Vimeo. 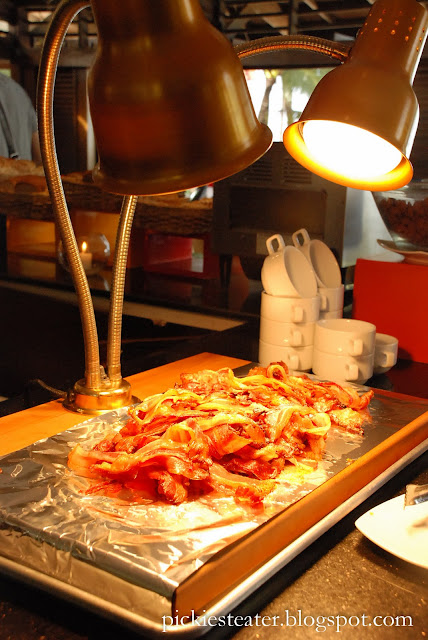 The only thing lacking is a glass case

I take pride of having been around the breakfast buffet circuit in my time, but I've never seen a restaurant make an altar - nay- a SHRINE to bacon. It was like I found the Ark of The Covenant. Any restaurant that knows the value of bacon enough to create a monument for it, - with not just one, but TWO spotlights on it - knows how to serve breakfast. 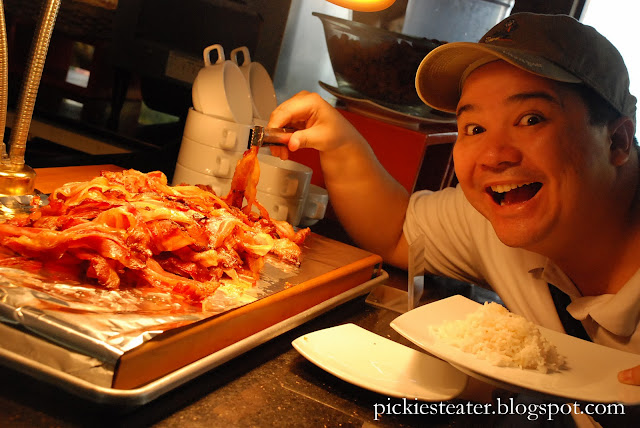 The smile on my face, lets you know that I need it. (Bacon)

The bacon was masterfully cooked, some a bit crispier than others, just for variety. I love it when bacon is a bit soft but the edges of the ends are a little bit burnt. 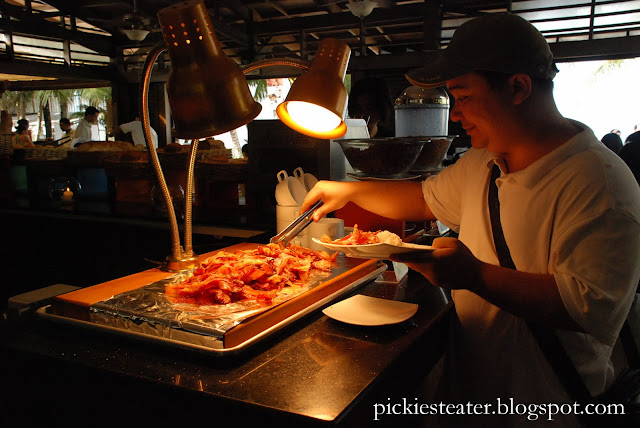 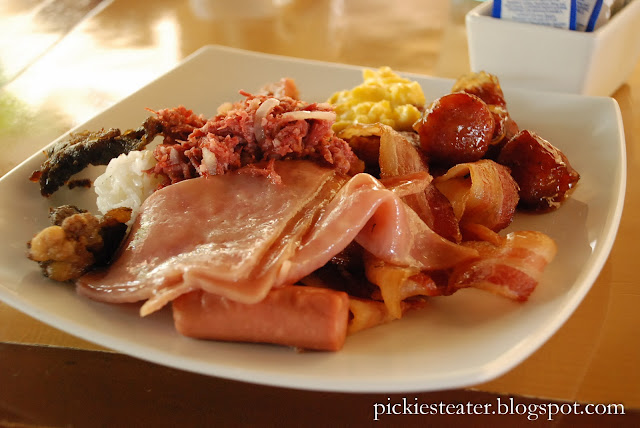 My work of art

When all was said and done, this is what my plate looked like. (Isn't it beautiful?) I went back for a little more bacon, but not too much, because it was our first day in Boracay, and there was alot of eating to be done.

Posted by The Pickiest Eater at 5:00 PM