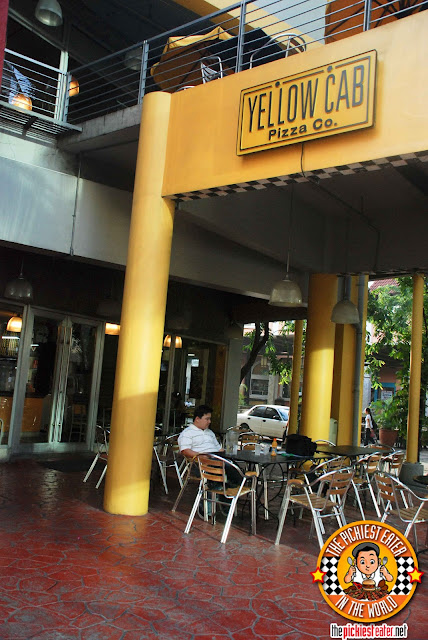 
Right after posting a "Hole In The Wall" discovery to redeem myself from my brother's accusation of being too "Mainstream", leave it to me to fall back into the same hole by writing about one of the country's most popular pizza joints, Yellow Cab Pizza Co.


But of course, me being me, I won't allow this to be just a simple review of the pizzas that Yellow Cab has to offer. This is me, telling you, that Yellow cab has something amazing to offer than just kick ass Pizzas.. but the catch is, are you willing to wake up for it? 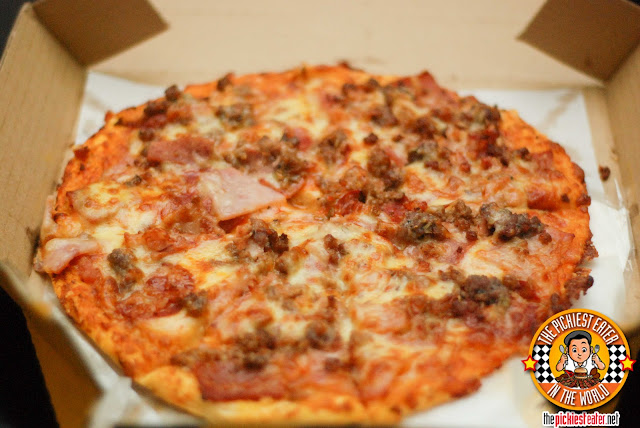 Something you should know about me.. I LOVE Pizza. I really really do. I love Pizza as much as Vin Diesel hates sleeves. Shakey's, Pizza Hut, Greenwich.. It don't matter, I love em' all - ESPECIALLY Yellow Cab. But as I mentioned in my very first post, I am hyper acidic, so eating Pizza literally is hazardous to my health - ESPECIALLY Yellow Cab Pizza.


I don't know if it's the tomato sauce, or the oil, or what, but whatever it is they put in Yellow Cab pizza, my stomach doesn't seem to agree with it, and I pay for it within an hour of eating it. If I have one or two slices, I can expect to wake up at 3am the following morning for a trip to the little boy's room, and I would be popping some TUMS throughout the day. However, anything more than that, and i'm KO'ed. I get an acid attack so bad, to the point where I even get fever. So whenever Rina and I order from Yellow Cab, we always have to time it during a weekend wherein I have no other plans because, I'll be out of commission. 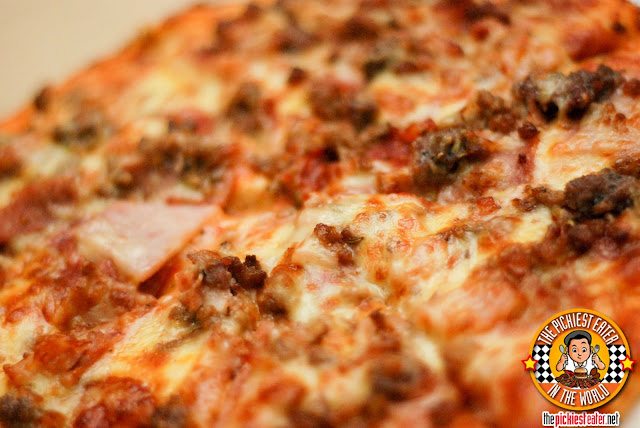 I am defenseless against it's power


I said I wasn't going to talk about the pizza, but staring at the picture, I couldn't help it. My favorite is... *surprise!*... the Manhattan Meat Lovers Pizza (10" 340.00, 14" 540.00, 18" 780.00)! No Greens or any of that gunk. Just all awesome.  Ham, Pepperoni, Crumbled Italian Sausage, and of course BACON.. basically everything that does the body.. umm.. well it probably doesn't do the body good, but it will make your taste buds very happy. For those of you that find Pizza Hut's Pan Pizza too thick, and those of you that think Shakey's thin crust is too thin, Yellow Cab's soft crust is an excellent compromise. 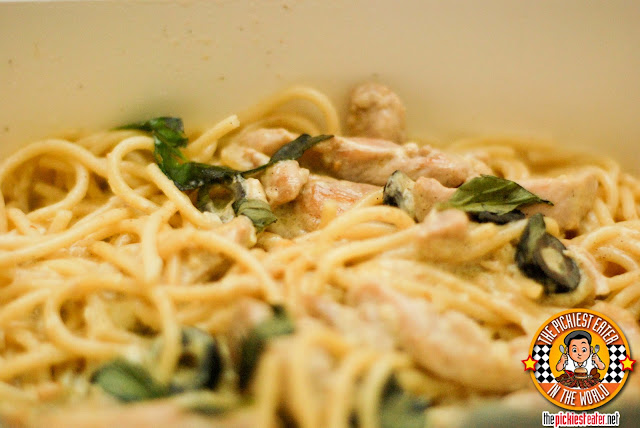 Also another personal favorite of mine is their Pasta Alfredo (P230). Other people find it a little bit too oily.. and they may actually be right.. I seriously could care less because it tastes great. Delicious, cream sauce that totally bathes the pasta noodles, and generous chunks of chicken strips make this dish a staple for me whenever I go to Yellow Cab. I usued to order the Charlie Chan Chicken Pasta a lot, and truth be told, it might even be actually better than the Alfredo.. but, just like the Pizza, it does a number on my stomach, so I had to shy away from it (damn you stomach!).


But again, I'm not writing about the Pastas either. What I am writing about, is their Breakfast Menu.. or their "Early Breads" as they like to call it. When It first came out,  my College Classmate/ Workmate / Dear friend / and fellow foodie, Rain (I can't seem to shake her off) gave me a flyer that announced Yellow Cab's new breakfast sandwich line. So within minutes, we were on the phone trying to order. Back then, they didn't deliver the sandwiches, and not all branches had it, but thankfully we found one in the Makati Area that did, and we had our orders picked up instead.


After that, I was a believer.


The morning of the day that we went to visit the doctor to find out our baby's gender, we set the morning meeting point for our companions at Eastwood. Rina said she was craving for McDonald's breakfast (I knew what I was having), so we went early just to have enough time to eat. However, once I saw that Yellow Cab was open this early (The Eastwood Branch is 24 hours), I sweet talked my beautiful and loving and sexy and kind wife into letting us go to Yellow Cab instead (don't ask how I do it.. I have my ways). 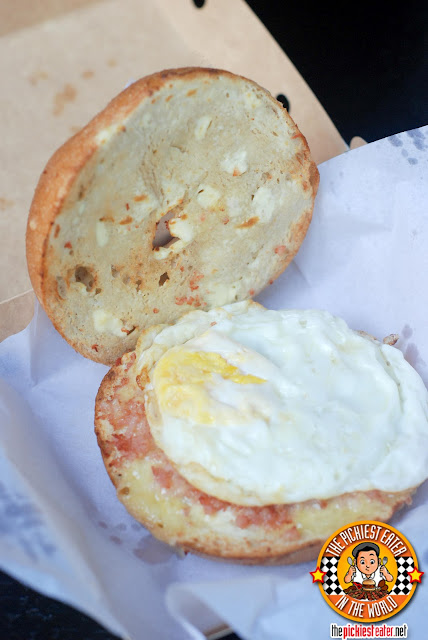 Rina ordered the Bacon and Egg Bagel (P120), which was rather servicable. It's light enough to get you going in the morning, but not too heavy that you won't be able to think about lunch anymore. I honestly am not a big fan of bagels because I like softer breads, but this surprisingly was better than the norm (Like I've said before, Bacon transforms anything into something awesome). Though the bacon was chopped up into little pieces, you could still get a grasp of the savory, smoky flavor, which was complemented by the cheese and egg. 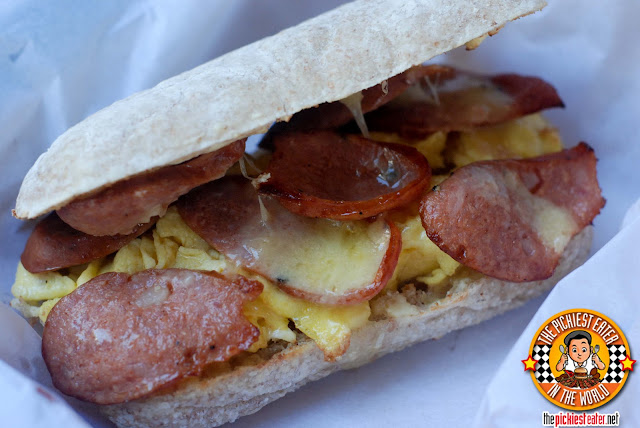 For those who like it spicy
My sister Raquel (Who protested the fact that I said downplayed her visiting of my blog by saying she was my only sibling that visited my site "with any form of regularity"), ordered the Hungarian Sausage, with cheese and Egg Ciabatta. The thinly sliced, yet juicy sausage did have a light spiciness to it (as Hungarian sausage often does), but nothing too overpowering. I was half expecting the scrambled egg to taste like it was "processed" ala fast food style, but it was surprisingly fluffy and seemed to be freshly cooked. The cheese was melted nicely into the bread without being burnt. My only note is, this Ciabatta bread, though it was delicious and soft on the inside, seemed "dustier" than the usual. In case you're going to be grabbing one of these bad boys on the go before a big meeting or something, you best be careful, or you'll get dust all over yourself. 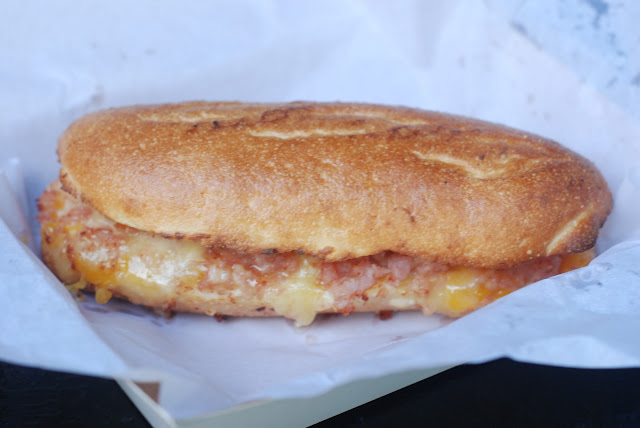 Great way to start the day

I remember that first time I saw the brochure of their new sandwiches, this sandwich was called "The Broadway Baguette" (Actually all of them used to have cheesy New York inspired nicknames.. they don't anymore). I found it an intriguing mix, to have Bacon, cheese and Mango Marmalade mixed into one deliciously toasted Baguette. Though I didn't request it, they overdid the toasting of my bread a little bit, which is exactly how I wanted it. 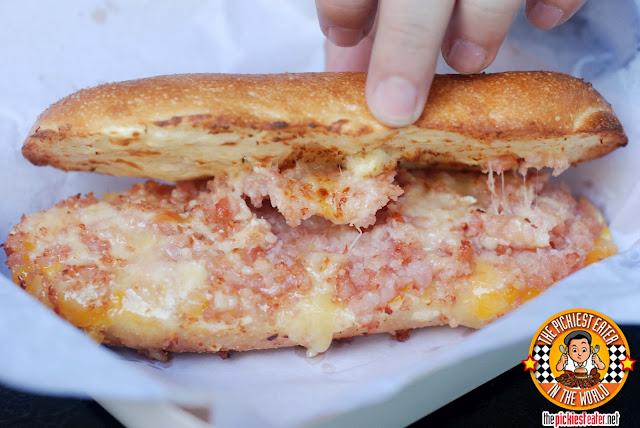 Don't ya love it when cheese oozes?

This was perfect for me, because I'm a lover of sweet food (not sweets, but sweet FOOD). The bits of bacon was fused together with the rich, melted cheese, and the mango marmalade (never tried it before) worked perfectly. It gave it a sweet tinge that made me craving another bite of my sandwich, despite the fact that my teeth just tore through it a few nano-seconds ago. Even Rina said she regretted not ordering this after taking a bite from me. See how much I love my wife? I let her take a bite from my bacon sandwich! (Only after she used the "but I'm carrying your child in my stomach!!" card. Well played, RinaZ. Well played.) 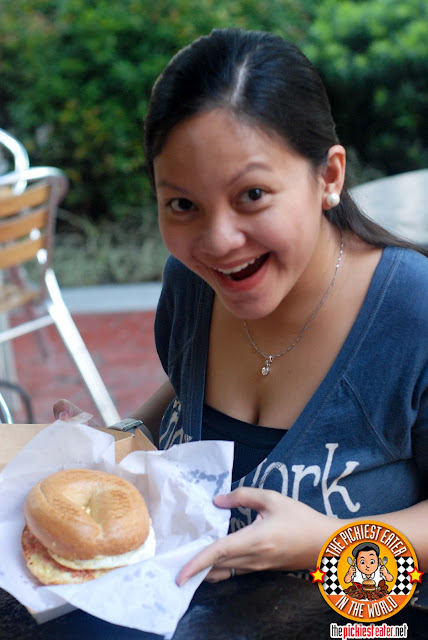 After writing this post, I couldn't help but crave for another Bacon Baguette. The operator informed me that the "Early Breads" is no longer called "Early Breads".. They are now know as.. Wait for it.. "Breads" (Enter applause here). You don't need to get up early to order them anymore, they are now available 24 hours a day (but still subject to the availability of the branch). 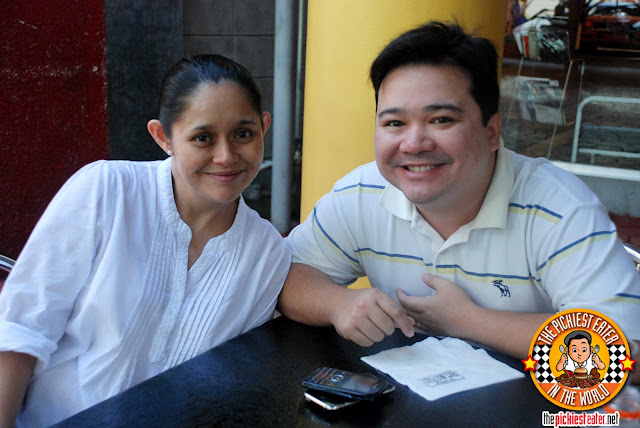 My lovely sister (and frequent visitor of my blog that NEVER misses a post), Raquel, joining us for breakfast. (O yan ha? Bawi na ako ha?)

Now that its available throughout the day, I think I'm going to be ordering the Bacon Baguette more often :) 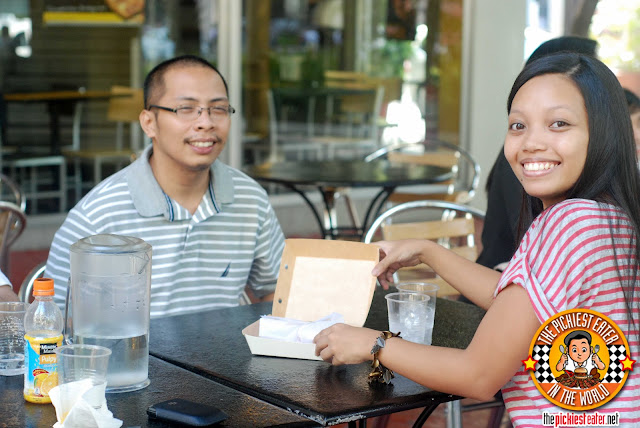 Chaikka and Don about to attack their Baguette
Posted by The Pickiest Eater at 11:39 AM