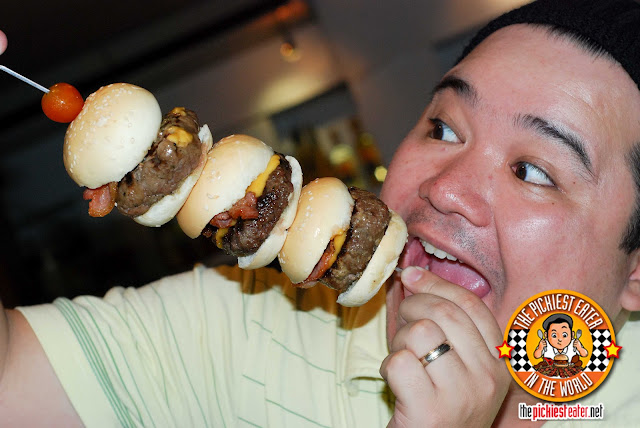 The Beauty of these Group Buying sites like Groupon Philippines (www.beeconomic.com.ph) is that it gives you the courage to try restaurants that has always intimidated you with their price tag. One such restaurant for me is Murray & D'Vine. To be fair, I know that their prices aren't exorbitant when compared to other fine dining places and steak houses in the metro.. But for a Burger Joint.. It's a bit much.

But since I was armed with a Groupon voucher that gave me P500 off on all food and drinks (I only spent P250), I decided it was high time to see what the Forbes Park of Burger Joints had to offer, and how it would fare in the immortal gastronomic battle that is the Burger Wars. 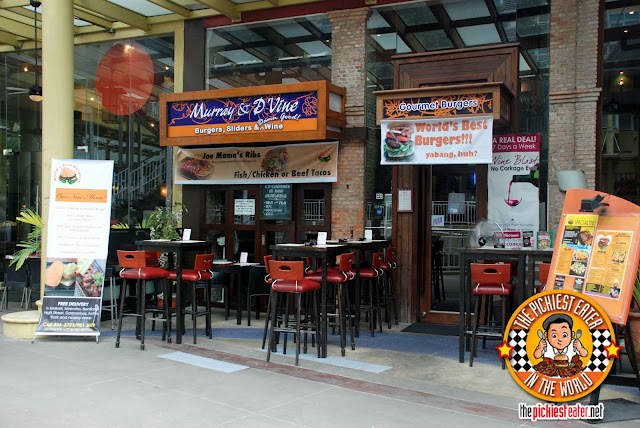 Given that it's got a "bar" feel to it, I assumed that guests of Murray & D'Vine liked hanging out in the Al Fresco area outside the restaurant, simply because they could unwind with some smokes while enjoying their burgers and beers. 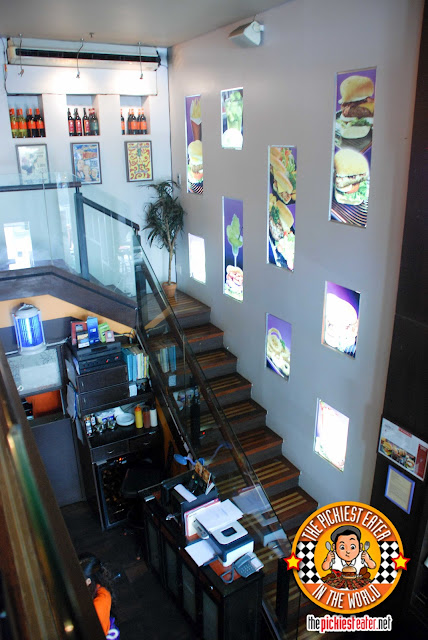 gotta squish in to go to the second floor

And then I walked in and came to my own assumption, that the reason why people prefer to stay outside, is because of how cramped it is inside. I was a little surprised to walk into a restaurant in Serendra, especially one as expensive as Murray and D'Vine, and find it a little unkempt. It wasn't exactly a war zone either, but it was nowhere near the level of tidiness of its neighbors (I had just come from a neighboring restaurant the weekend before that could give a lecture to the Department of Health on cleanliness, so my standards are a bit high). It's a narrow, loft-type layout, so big parties would have a little trouble feeling comfortable. But it's just right for intimate settings. 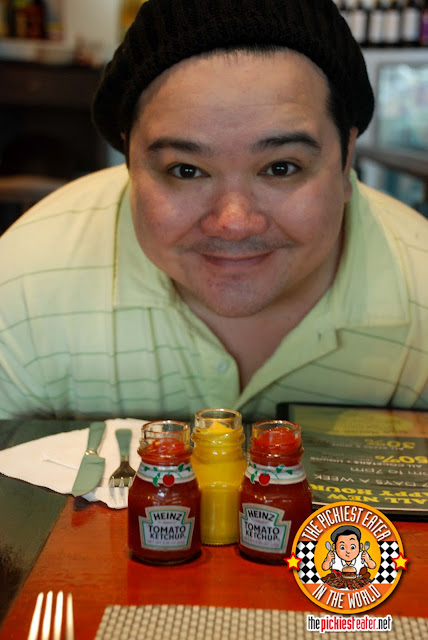 After ordering, Rina was amused by the little bottles of Ketchup and Mustard that they brought out. She found it really adorable. Me? I liked holding it up because it made me feel like a giant. 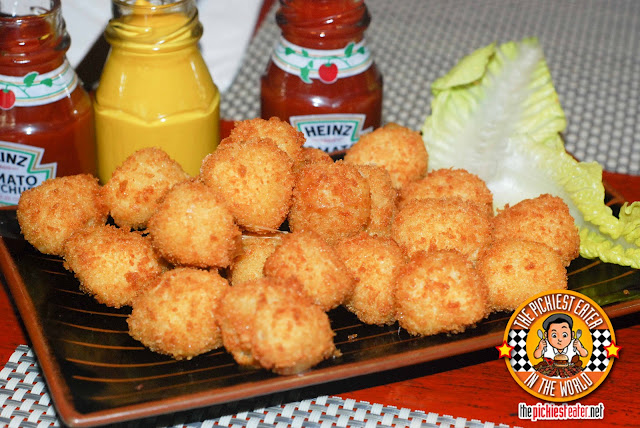 You should've seen the smile on Rina's face

A meal with Rina would not be complete without a dish that had some sort of cheese in it. So it was a no brainer for me to order the Mozarella Cheese Balls (P210) as an appetizer. It was covered in a light but crunchy bread coating, and I loved how the cheese just exploded into your mouth with every bite. 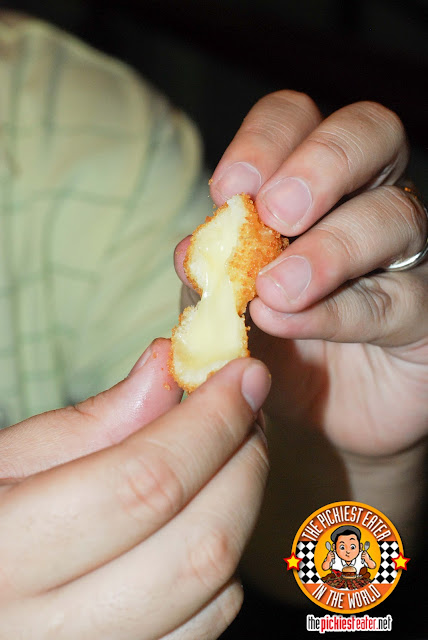 And they weren't stingy on the cheese either. The cheese balls were filled with Mozzarella, satisfying a cheese lover like my wife. My only comment would be, I think it could have used a better sauce, apart from Ketchup (especially for hyper acidics such as myself). Maybe  a nice aioli dip or something? Nonetheless, considering there were at least around 20 balls in that plate, I would have to say that it was a rather heavy appetizer, and totally worth the price of admission. 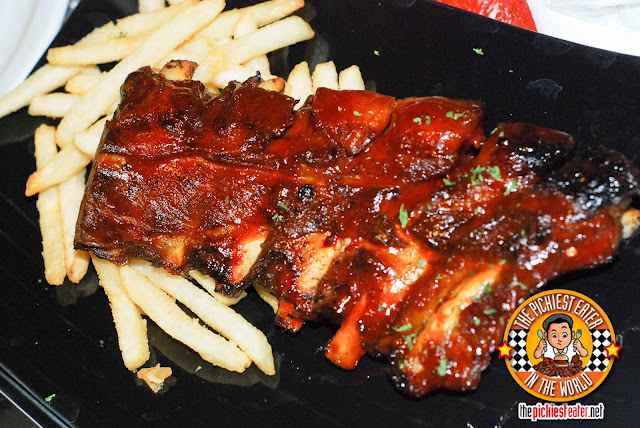 I'm a slave to the ribs

When strategizing our lunch order for Murray and D'Vine (I take my ordering seriously), I decided I wouldn't be me if I left there without trying their "Imported Spanish Baby Back Ribs" (P395). I was a little bit wary upon seeing it placed down unto our table, simply because it didn't look very meaty, and it seemed to be a little dry and tough. As I dipped my fork into the meat and watched it rip cleanly off the bone, all my fears were dispelled (and somewhere in heaven, and angel sang a song). The Barbeque sauce was a tangy rub that gave the ribs a nice glaze to it. As good as it was, I'm not sure what was so "Spanish" about it. 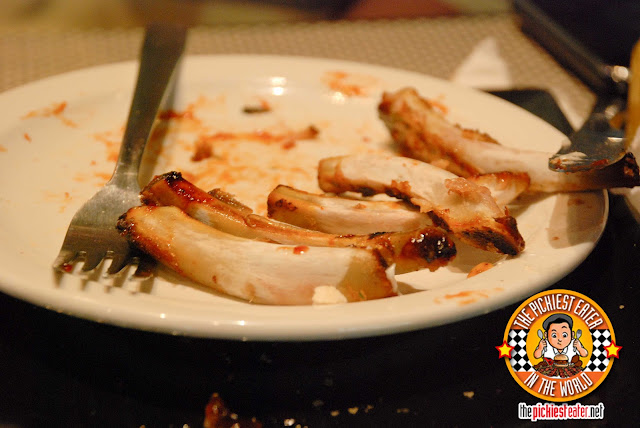 Clean off the bone

The meat was rather lean though, with very minimal fat in it, yet it didn't get the meat dry at all. The last bite I took had a nice chunk of fat on it, that had a crispy edge, and it was excellent! It convinced me that I really would have preferred a larger set of ribs with more fat in it, but that's just me. Although I enjoyed the Murray and D'Vines' Spanish Ribs, The portioning made the dish seem a little bit too expensive (although not overly). 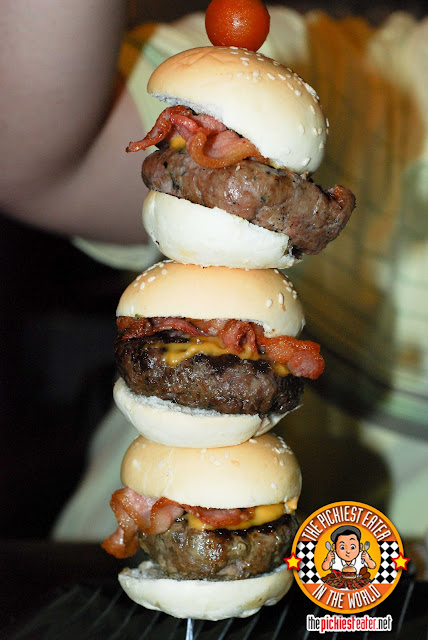 A Tower of Sliders

Though they're known for the heart shaped buns and burgers, I thought it would be more economical for me to try three different type of Murray and D'Vines Sliders, instead of just one large burger. I tried the Lamb slider, the Angus Beef Slider, and the Wagyu Slider. Again, I wouldn't be me if I didn't add Bacon and Cheese to all of them. The bacon, I understand, but considering how much it costs, I think it's a bit strange that the sliders don't come with cheese already as a default.
The lamb had the gamey taste that I expected, but I didn't care too much for the texture. The Wagyu and Angus were both juicy and grilled wonderfully, but I couldn't tell which one was which. Either way, they were delicious.. but again, for three little burgers, it was on the expensive side. (Take a look at the menu, and divide each slider type by three, Add P90 for the cheese, and P180 for the bacon, then add them all up, and Viola! that's how much it cost!) 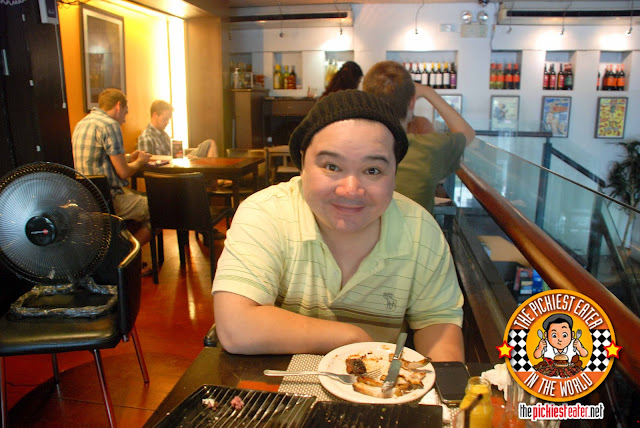 Kinda weird having that electric fan there, dontcha think?

I actually quite pleased with the service of my waitress. It was cool seeing her interact with her foreign guests. She playfully said to the teenage american diner, "Do you need the menu, or will you be having your usual?". The replied, "You know my usual?". The waitress then proceeded to rattle off the name of a burger, add on's and how the Teen likes his burger cooked, much to his and his father's delight.

Regarding service though,If they're going to be serving two floors, I think they really need to have one waitress stationed in the top floor, so guests don't need to shout down "MISS!!" at them from the second floor. 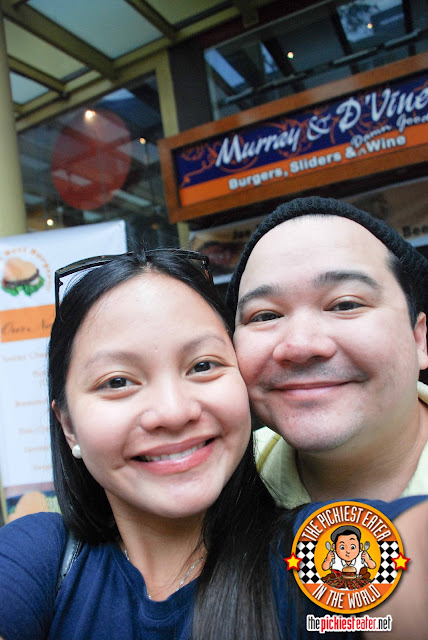 The verdict? Too rich for my blood.

Even with the voucher, I spent a whole lot more than what I was expecting on Burgers. Not just any burgers, mind you.. Sliders.. meaning TINY burgers. Were they worth it? Well, the voucher was a big help, but if you have money to burn, I don't see why not, but I would be remiss If I didn't tell you that you could probably get something along the same quality a few yards away at Brothers Burger In High Street, or Burger Avenue in The Fort.

I enjoyed the Ribs and the Fried Mozzarella balls though, and I'm really interested in trying their Steak Sandwiches!

Posted by The Pickiest Eater at 1:24 PM