SURF'S UP AT SUNRISE BUCKETS! 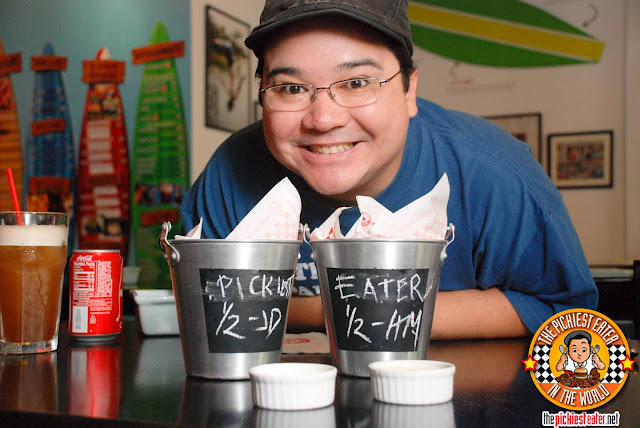 I got my own Buckets!

Amidst the (admittedly well deserved) hype of Bon Chon Chicken and Manang's Chicken, another restaurant that specializes in Chicken Wings seems to have gotten lost in the shuffle. And if you think Sunshine Buckets is just one of those run of the mill chicken wing places you pass by on the street corner, you should be ashamed of yourself..

Because I promise you, it's so much more than that.


To compare Sunrise Buckets to Bon Chon or Manangs would be rather unfair, mainly because the two only offer limited variants of their products. Both offer similar Soy Garlic or Spicier options to their chicken, whilst Sunrise Buckets rolls out TWELVE different types of chicken wing flavors. A more suitable comparison would be that of Wingman, which offers NINE different type of wing variants 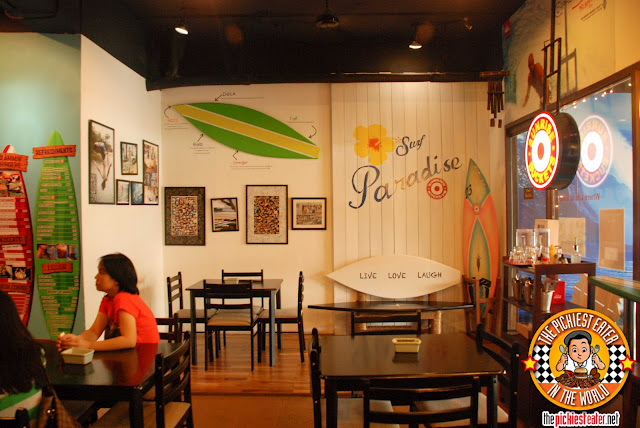 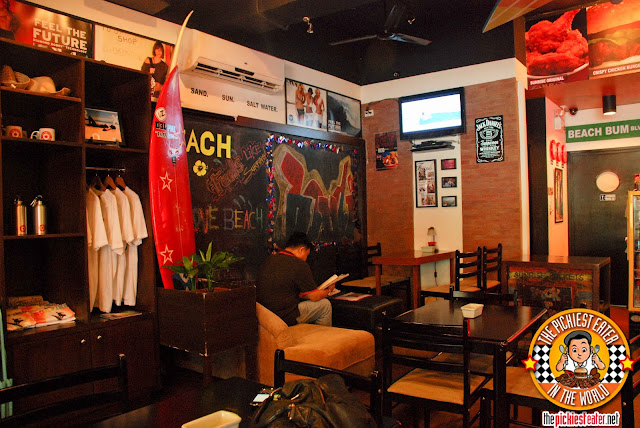 This isn't at Boracay, but in the heart of San Juan.

Wanting to make use of the voucher I purchased from Ensogo (P250 bucks for P500 worth of food), Rina and I finally found time during a weekend to the usually busy San Juan area. The place opens at 11am, so we made sure to be there when it opened, because I know the parking lot of the Commercial Complex that its in, Madison Square along Ortigas Avenue, gets packed during the day.

Since we got there a few minutes earlier, we had time to admire the Al fresco area outside (for smokers, I guess). Even from the frontage, the "Surfer" theme was clear, and it really gave you the feeling you were at a chicken wing shack by the beach.

Think they got enough surfboards?

The surfing theme comes on even stronger when you enter the actual restaurant. It has a cozy atmosphere, and they obviously did their research, because they even got Jack Johnson, Bob Marley and other type of music you'd associate with the beach piped for the extra added feel (Sorry Carlos Agassi fans, but no Boracay Baby). What surfing and chicken wings have in common, I have no clue, nor do I care. They can call it Outer Space Wings from the Planet X for all I care, just as long as they taste good. Although for all the design they have inside, I gotta admit, their logo looks really bland. 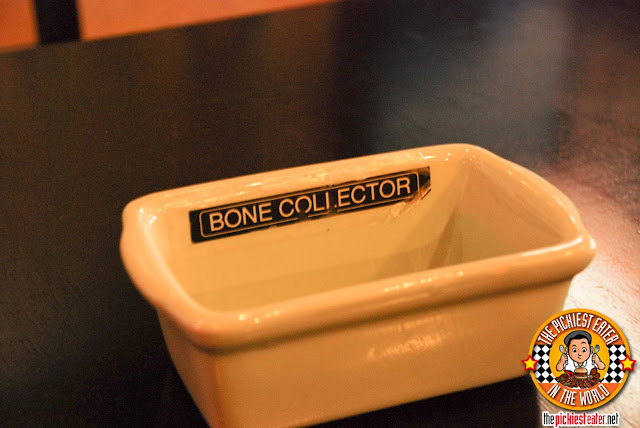 (BEFORE. See bottom of the page for end result)

Anyone that eats vast amounts of chicken wings knows that it is essential to have a separate plate to put in all of the bones. In a masterful show of knowing their product well, Sunrise Buckets provides each table with a small bowl known as "The Bone Collector". They also give you plastic gloves if your majesty prefers that their hands not get covered in sauce. I thought it was a cool touch, but truth be told, the fun in eating wings is getting your hands all dirty. I tried eating it with the plastic on my hand, but honestly found it a bit cumbersome, but that's just me. 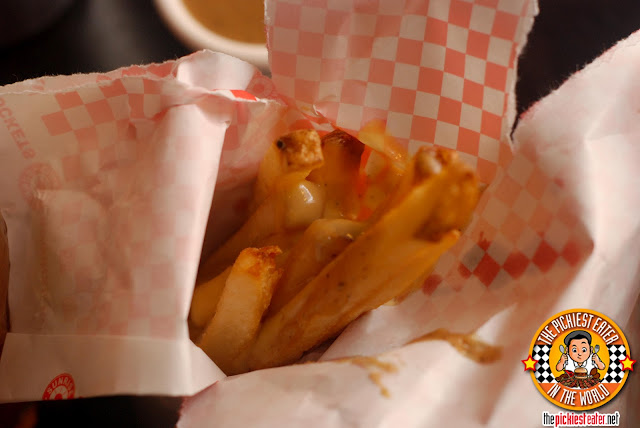 I ordered their Poutine (Solo P115) as a side dish. There was a place in Eastwood Cinema Mall that used to serve this, and for the life of me, I can't remember their name. Sadly, I don't think they're there anymore, with their stall now replaced by a Sabrett (not a bad replacement though). Anyways, these were nicely fried french fries with a rich, creamy gravy, that I could not get enough of. The only thing that threw me off with this, was that they served in a paper cone.. which was weird. As you can imagine, in order to get the fries at the bottom, i had to dig my fingers deep into it, mutilating the fries in the process (R.I.P., Bottom Dwelling Fries), not to mention tearing up the paper. There has got to be a better way to serve Poutine Fries.


The wings have been categorized into three different sections: "Awesome" - which supposedly caters to the Filipino's taste, "Wipe Out" - which uses flavors inspired by the USA and (of all places), Canada, and
"Cloud 9" - Sunrise Buckets own concoctions.

Pricing is by category.. See the menus below. 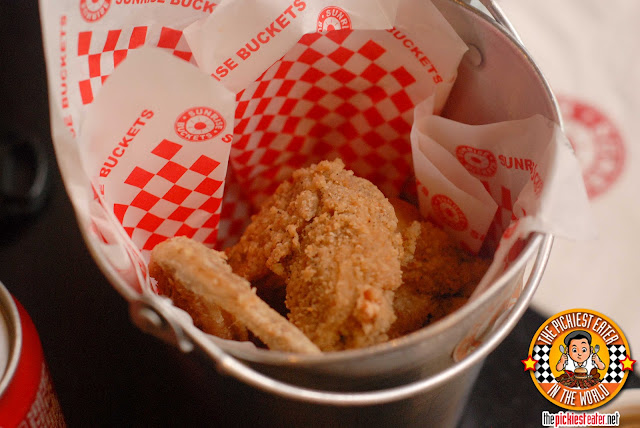 Before I gave all the other flavors a shot, I wanted to try their basic "Crispy Wings" (P145 for 1/2 lbs, roughly 5 pcs), which is essentially Deep Fried Chicken Wings , with a bread coating, served with gravy. I figured that if the base was good, then everything else would follow, right? Well, their Crispy wings could seriously stand on its own. The lightly peppered bread coating gave the perfectly fried chicken a nice casing to the juicy chicken meat inside. The gravy gave it added flavor, but truth be told, I could eat it nude (Meaning no sauce. Not naked. Weirdo.). 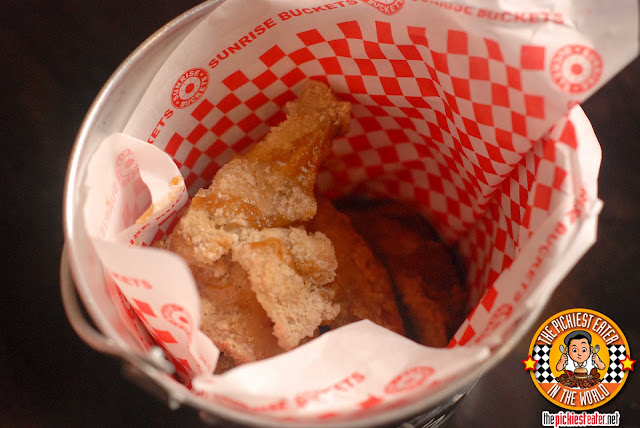 If Former President Erap has eaten in Sunrise Buckets, I'm sure his favorite would be The Jack Daniels Wings (P220 for 1/2 lbs). Its technically the crispy wings, drizzled with Sunrise Bucket's very own Jack Daniels sauce. If your next question, is "Do they really use Jack Daniels Whisky to make this?" the answer is "YES.. *hic*..". It was wise of Sunrise Buckets to only lightly drizzle the JD sauce on the chicken and have some more extra as a side, because the taste of the alcohol was rather strong for me, a non-drinker (When out at night and someone asks what I want to drink, I usually reply, "Light". When they hand me a light beer, I tell them, "I'm sorry, I meant "Chocolait". *rim shot*) .  For people who can handle the flavor, (To be fair, it's not really all that powerful, i'm just a wuss when it comes to liquor), you can dip your chicken into the sauce all you want.


If you're like me, then what's on the chicken is enough. Again, as they do famously, I have to commend them for cooking the wings immaculately, but among all the flavors I've ordered, this is the one I liked the least, and would probably not order it again. 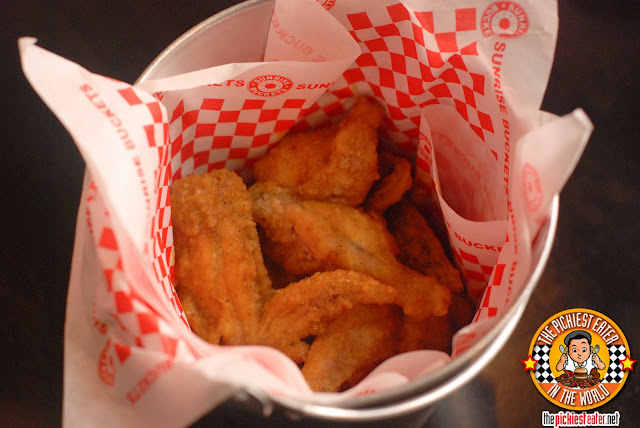 I'm a sucker for anything with Honey Mustard on it

Honey Mustard Wings (P220 for 1/2 lbs).. now you're talking. If the Jack Daniels sauce was merely lightly drizzled on the Wings, the Honey Mustard wings seems to have been dipped into the sauce. And I don't blame them either. If I were a chicken wing, i'd want to bathe myself in this sauce too (without the part of being eaten by a hungry human, of course). If you're looking for a wonderful blend of sweet and tangy, look no further. It comes with a side of Sour Cream, which, in all honesty, tastes so mild that it barely has any taste to it at all.Regardless though, I could finish a bucket of this myself.


After Rina and I wolfed down roughly 1 1/2 lbs of chicken wings, I strangely found myself still craving for more (mainly because I wasn't eating it with rice). So, I decided to go for one more bucket.. 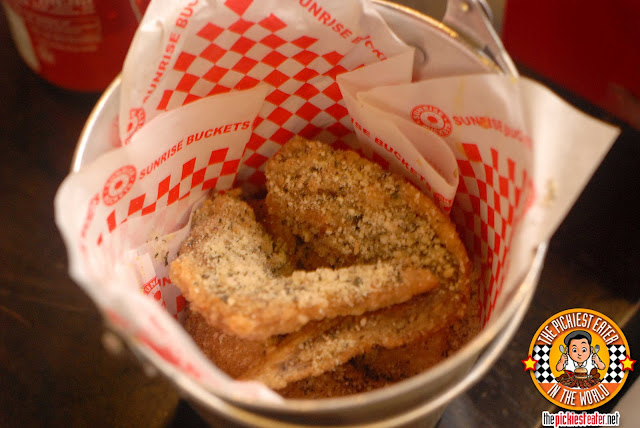 Call it fate, call it serendipity or simply pure luck.. But whatever it was, It seems my decision to order the Garlic Parmesan Wings (P220 for 1/2 lbs) were pre-ordained by the Food Gods. This was fantastic! The mixture of the tasty herbs gave it an unmistakable Italian flavor, and the generous dusting of Parmesan cheese added a distinct richness to the chicken that I could not get enough of. Seriously.

This, undoubtedly was my favorite among all four flavors I tried, followed by the Honey Mustard, the Crispy Wings, and then the Jack Daniels.


The first flavor I ordered were the Teriyaki Wings, but they were sadly out of stock, so it's something I'm looking to go back for. 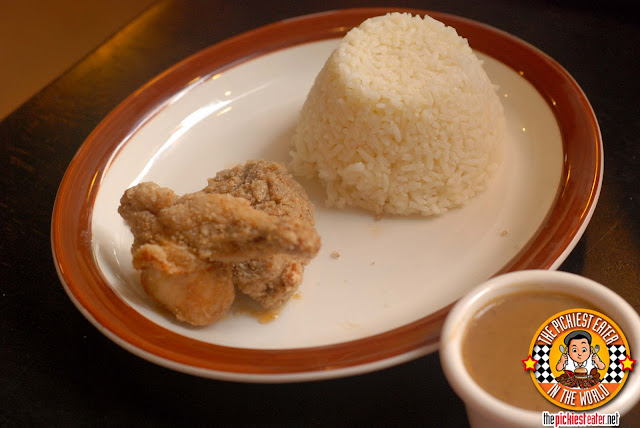 Oh, and on a side note, Rina ordered their buttered rice (P50), but didn't see what was so "buttered" about it. Maybe her expectations were just too high, because she had devoured nearly a whole chafing dish of my mom's buttered pilaf all on her own. 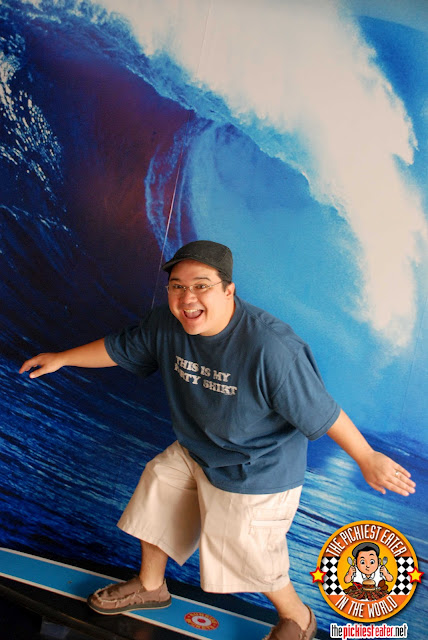 Yes, i'm aware, I'm supposed to be an adult.

We really enjoyed our visit to Sunrise Buckets, and in a way, I'm glad I didn't try them yet when I saw their booth in Mercato Centrale, because I think the beauty of the whole Sunrise Buckets experience is being there in their restaurant and enjoying the whole surfing theme. (See picture above) 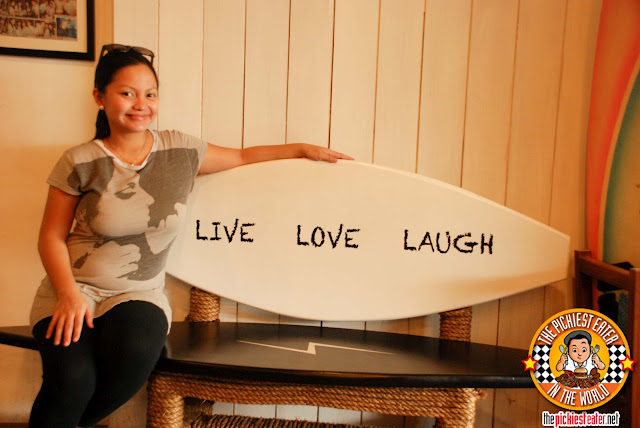 Words we live by. Except in the end, it's supposed to say "Eat". 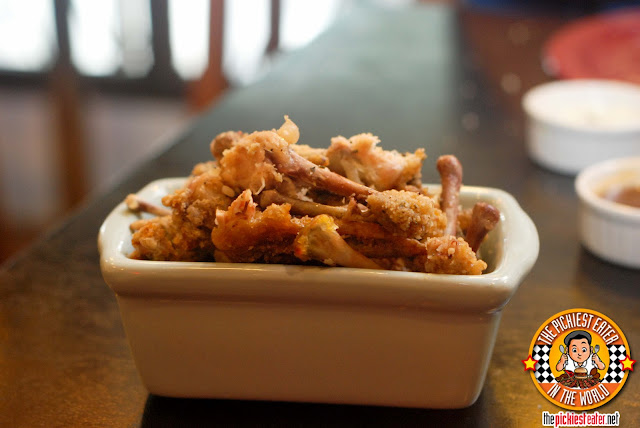