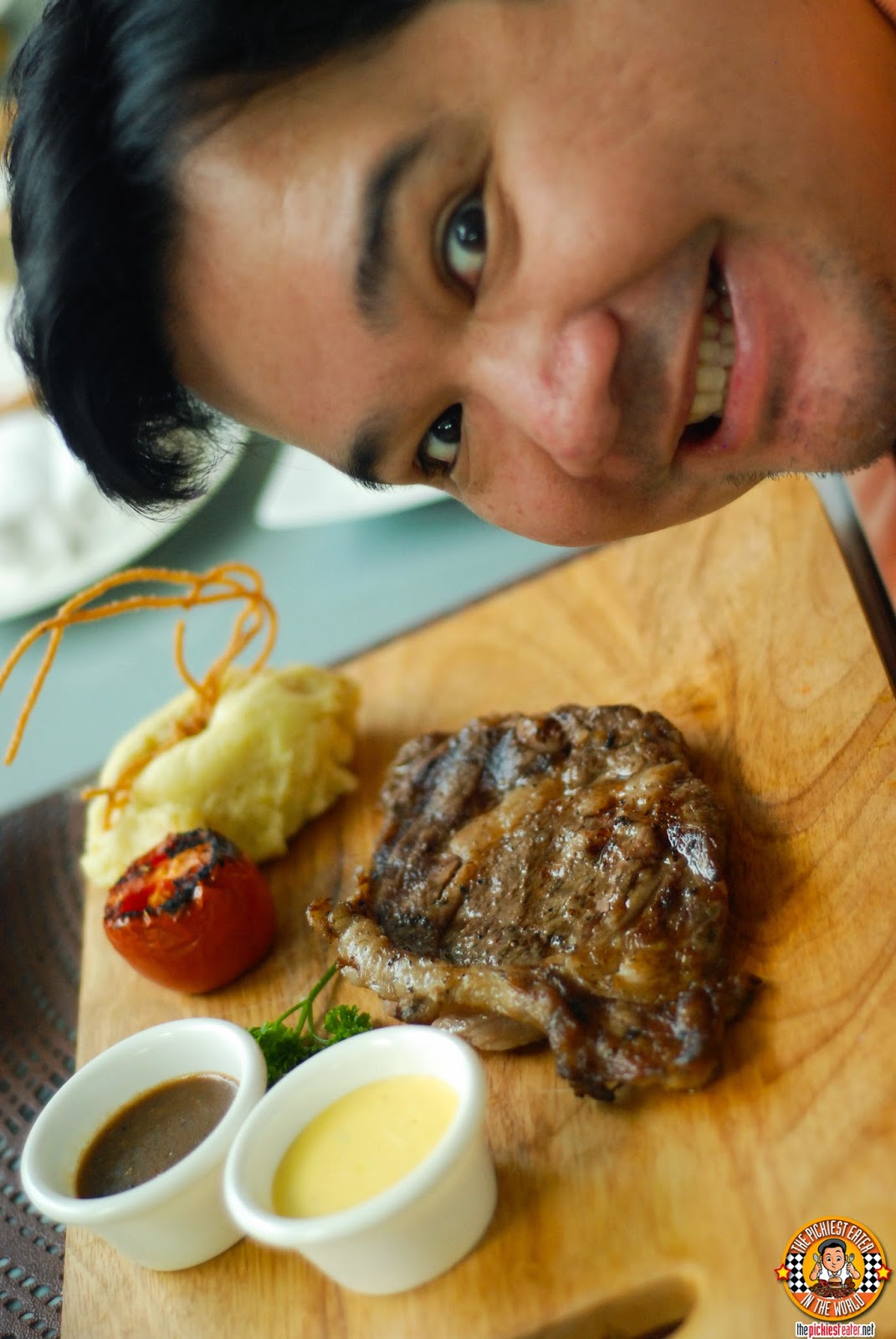 It was in 2012 that Rina and I first visited Acacia Hotel in Filinvest City in Alabang, where Rina and I were invited to try the buffet of their Cafe Acaci. Unfortunately since then, we never had the opportunity to go back.

That all changed when the Queen of the South, Jane Go, the Mommy(?) Blogger known as Sugar & Spice for a remarkable weekend in Alabang, including a stay at Acacia Hotel.

After checking into our rooms, we were treated to an amazing lunch at Acacia Hotels' newest dining spot.. A STEAKHOUSE! 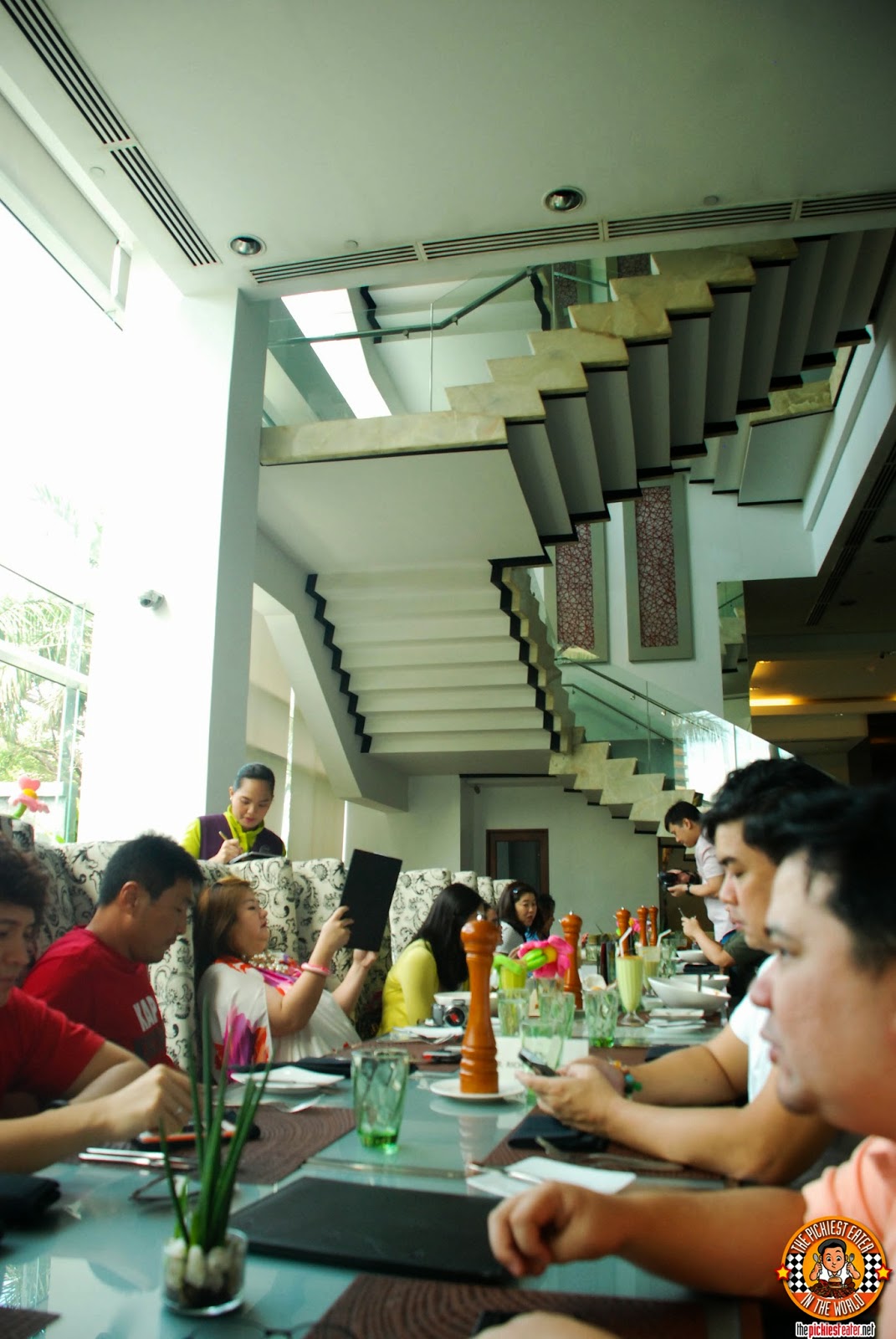 Last December, Acacia Hotel maximized it's floor area and found room in their ground floor for the rise of A Steakhouse. Considering my love for all things all things meat is stuff of legend, I was really looking forward to trying out A Steakhouse's selection of steaks. 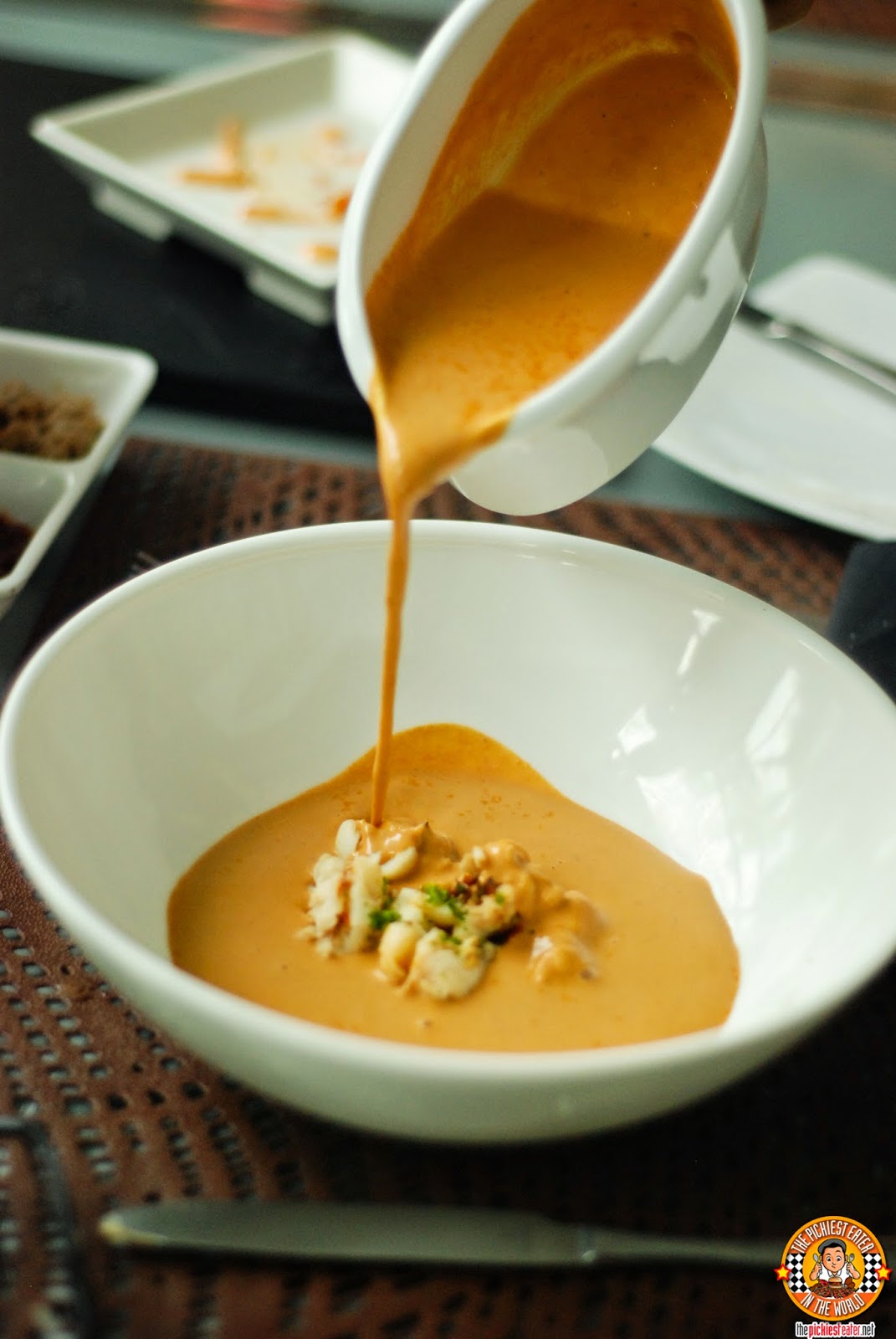 Rina ordered couldn't resist ordering the Lobster Bisque (P250). She was first given a soup bowl devoid of any soup, with bits of shredded lobster meat placed in the center. The creamy bisque is then poured into the bowl right in front of you, allowing the thick soup coat the meat. Mixing the lobster meat into the soup allows the robust flavor of lobster to mesh with the bisque, creating quite an extraordinary soup. 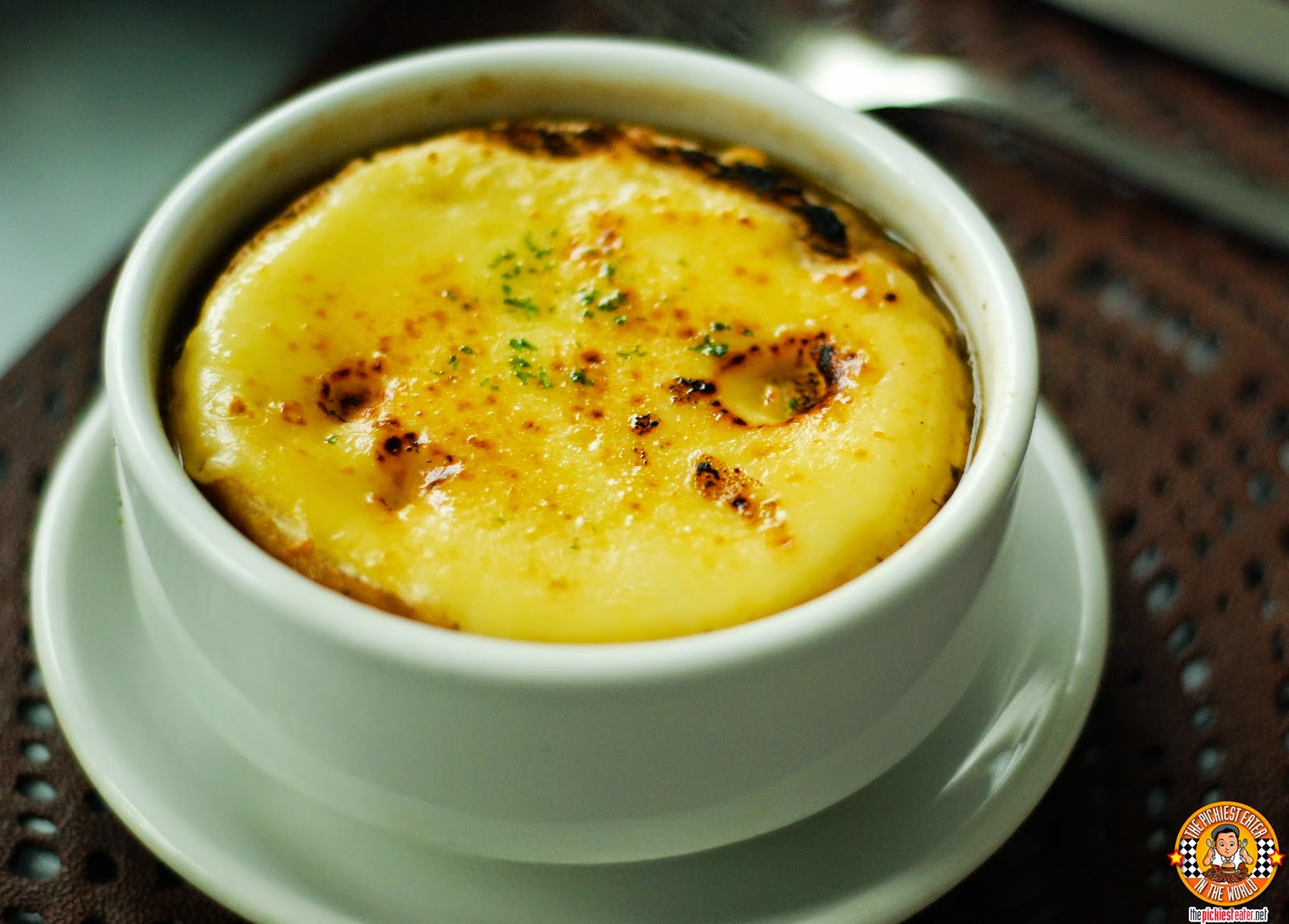 I ordered the French Onion Soup (P180), which I found to be rather excellent. The broth gave off a pronounced flavor of beef, letting the delicious meatiness compliment the sharpness of the Gruyere Cheese coated Golden Crouton. The carmelized onions let off a gentle sweetness that balanced the collision of flavors together. 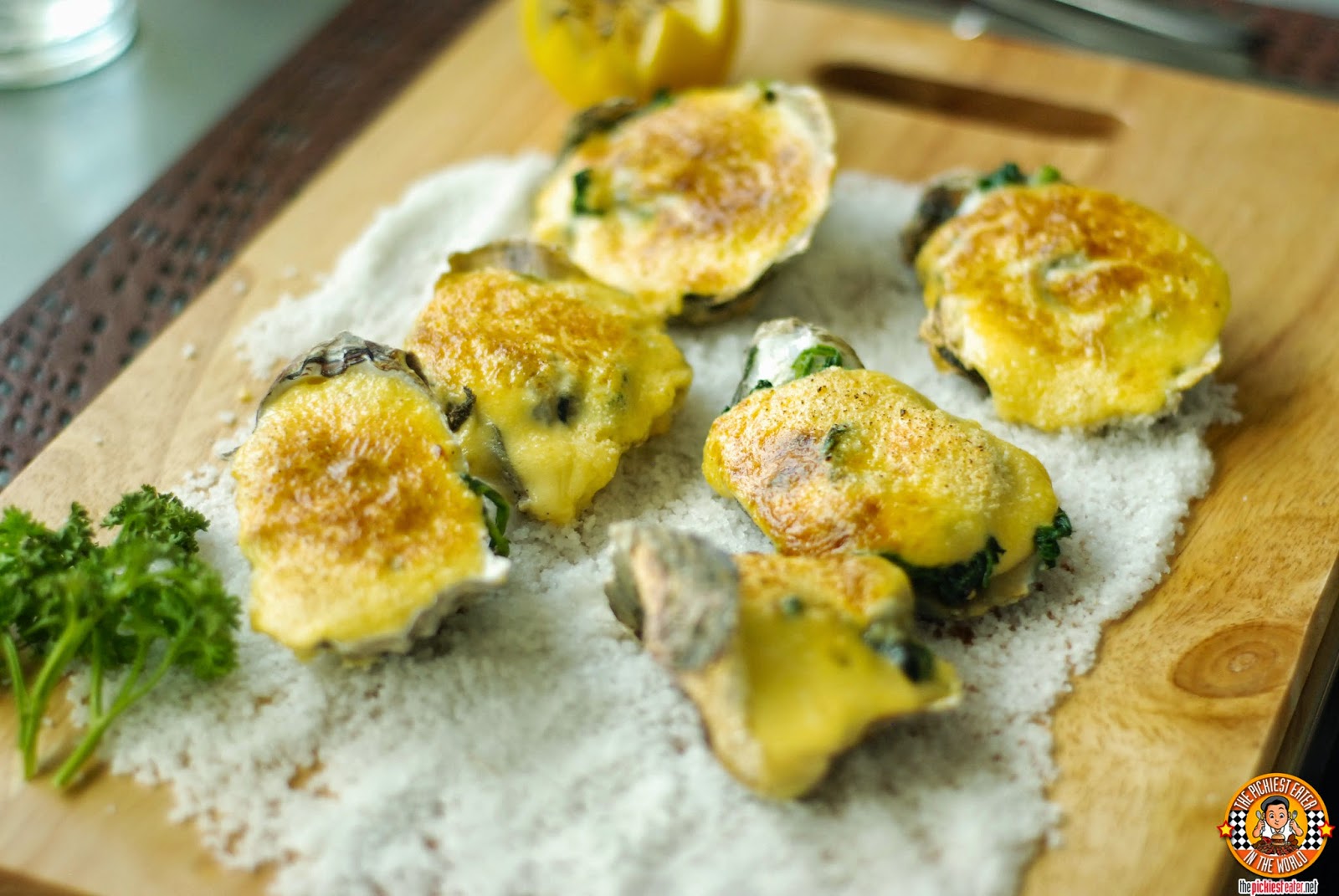 We were also served the Oysters Rockefeller (P380) as one of the appetizers. As a picky eater by nature, I tend to avoid food that look like giant boogers, but Rina tried one, and enjoyed the freshness of the juicy oysters, topped with spinach leaves, and drizzled with Hollandaise sauce, and baked to a golden gorgeousness.

The Steaks, Chops and Chix meals all come with a side dish or (Trimmings) for you to choose from. Based on my experience I strongly suggest you NOT order the mashed potatoes, because from what I gather, the dish already comes with a scoop (which tastes awesome btw). 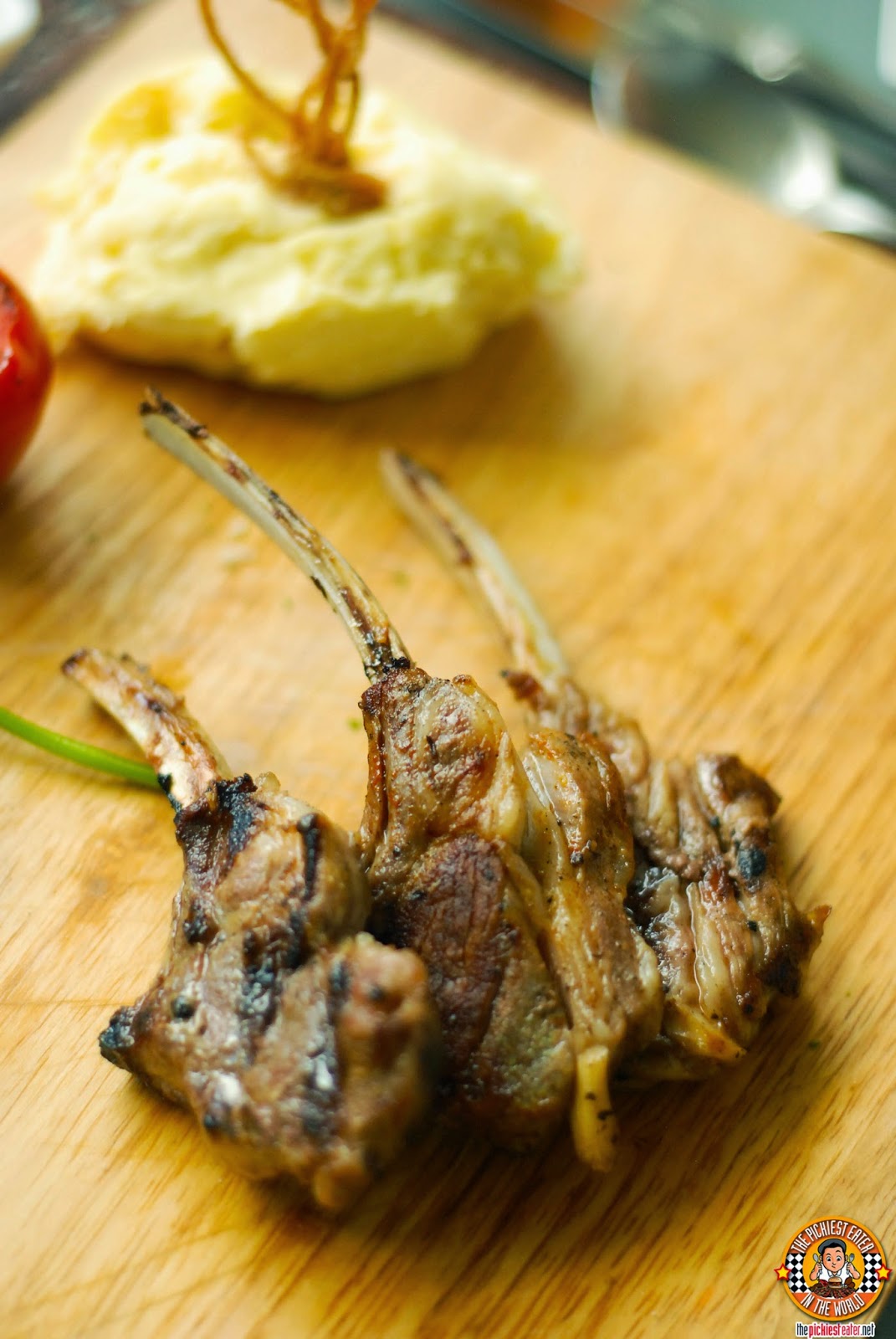 Rina and I decided to share our two orders with each other, with the first being A Steakhouse's USDA Prime Grilled Lamb Chops (P950 for 200g). The chops were cooked to a nice medium rare, with the savory gaminess of the meat pairing nicely with mint Jelly that I chose as my "Sauce".

I meant, WE chose as our sauce.. (Oo nga, share pala kami hehe) 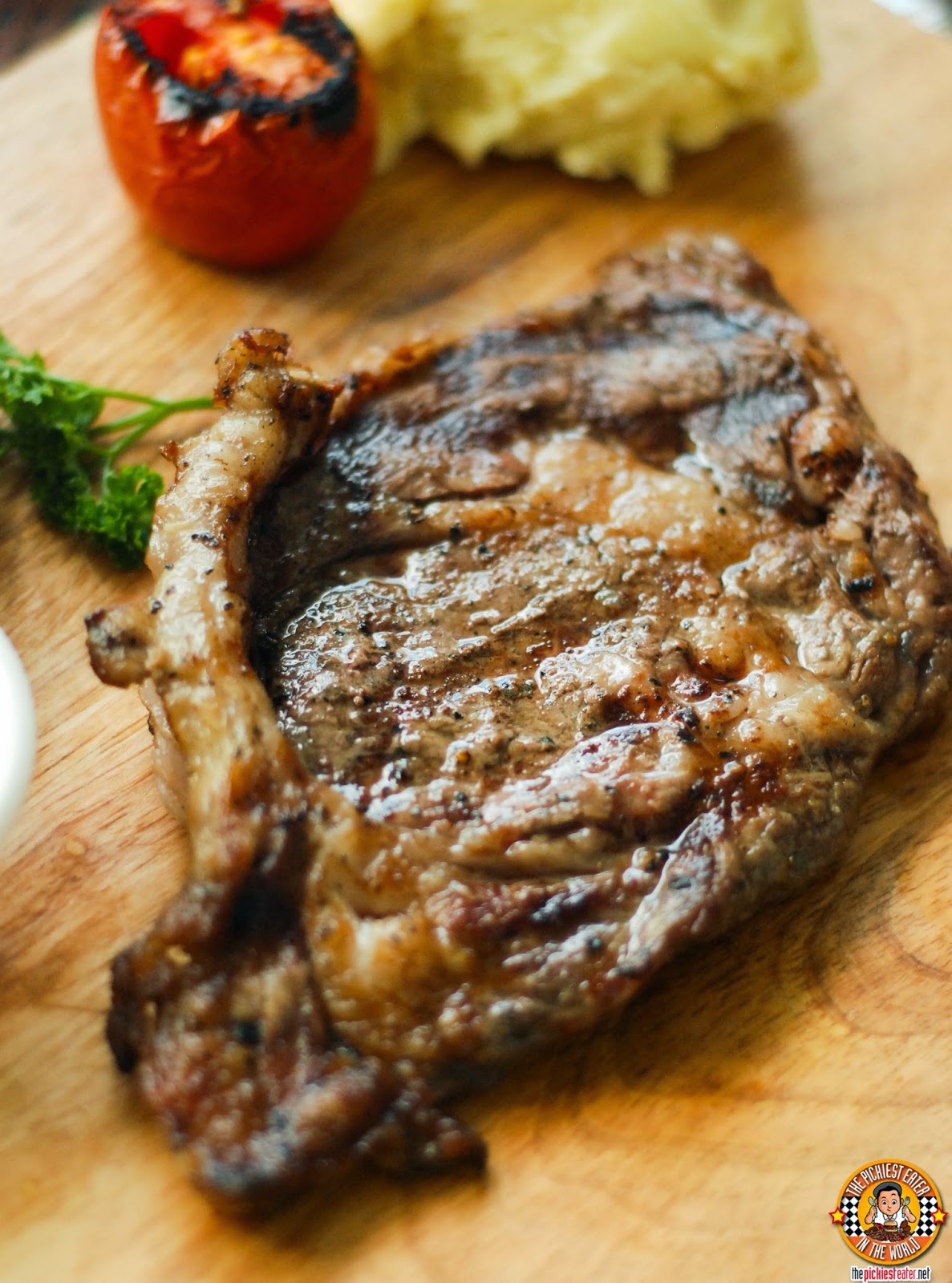 There was no denying I-.. I mean, WE would order my favorite cut of steak, the USDA Prime Grilled Ribeye Steak (P1,650 for 240g) for our other order. If you've noticed from my other posts that have steak in it, the one constant I say over and over again that I am adamant about, is that my steak needs to have fat.

And A Steakhouse's Ribeye had it in abundance.

There seems to be two schools when it comes to steak- those that like their steak sans or at most, minimal fat because they feel what they are paying for is the quality of meat, and those like me, that wouldn't mind a slab of fat with a nice marbling of meat.

The steak was seared perfectly, and cooked to a stunning medium as I had requested, with the sides lined with a plump strip of fat, and the center of the meat streaked with lines of fat as well.

I wasn't a fan of the Bernaise sauce, but the Peppercorn sauce hit the spot for me. Although the meat is flavorful enough to hold its own without any form of sauce. 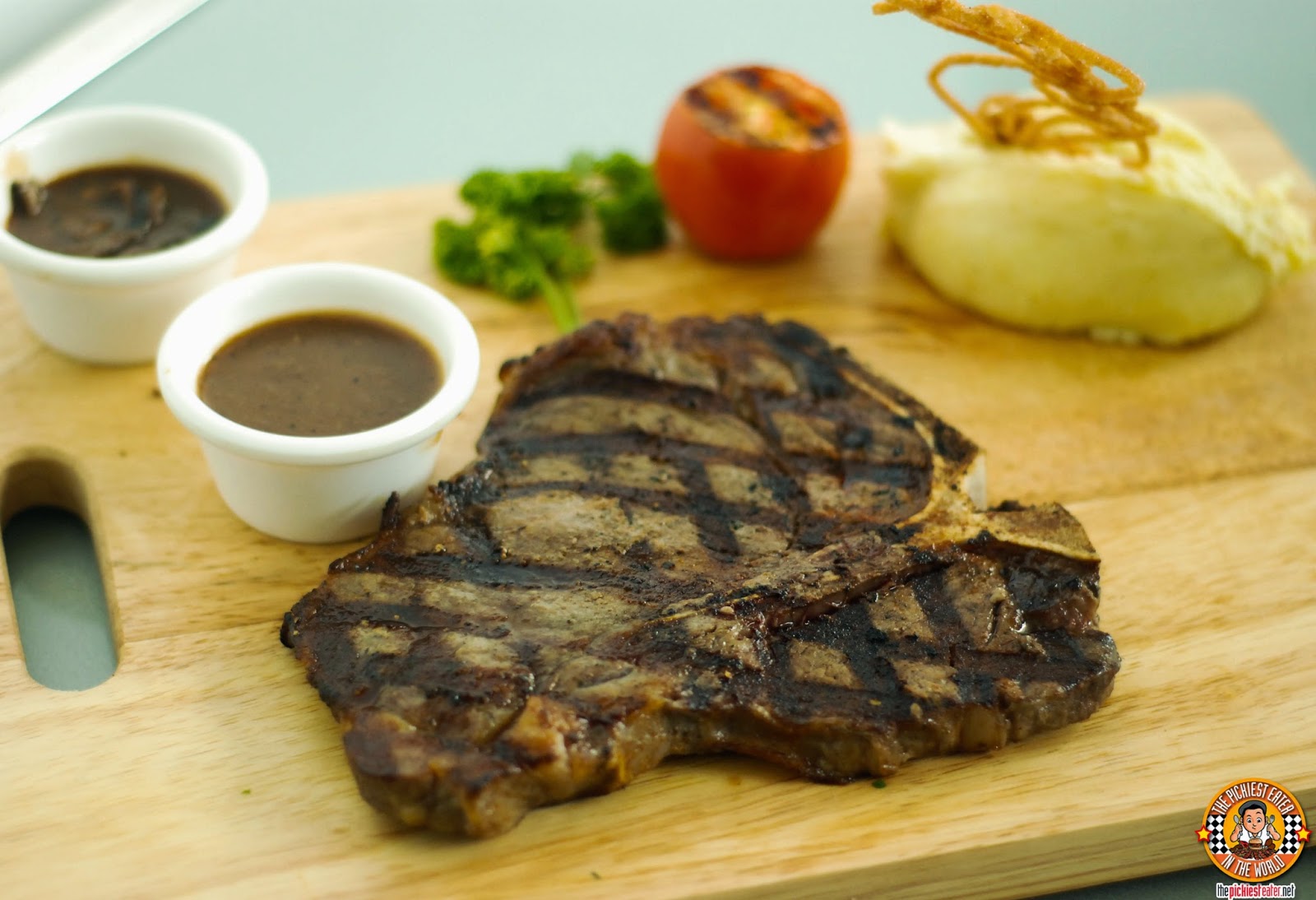 Queen Jane is known for her fondness of the finer things in life, so I had a feeling she was going to order the USDA Prime Grilled T-Bone Steak (P2,950 for 400g). This impressive piece of meat had beautiful char marks across the meat 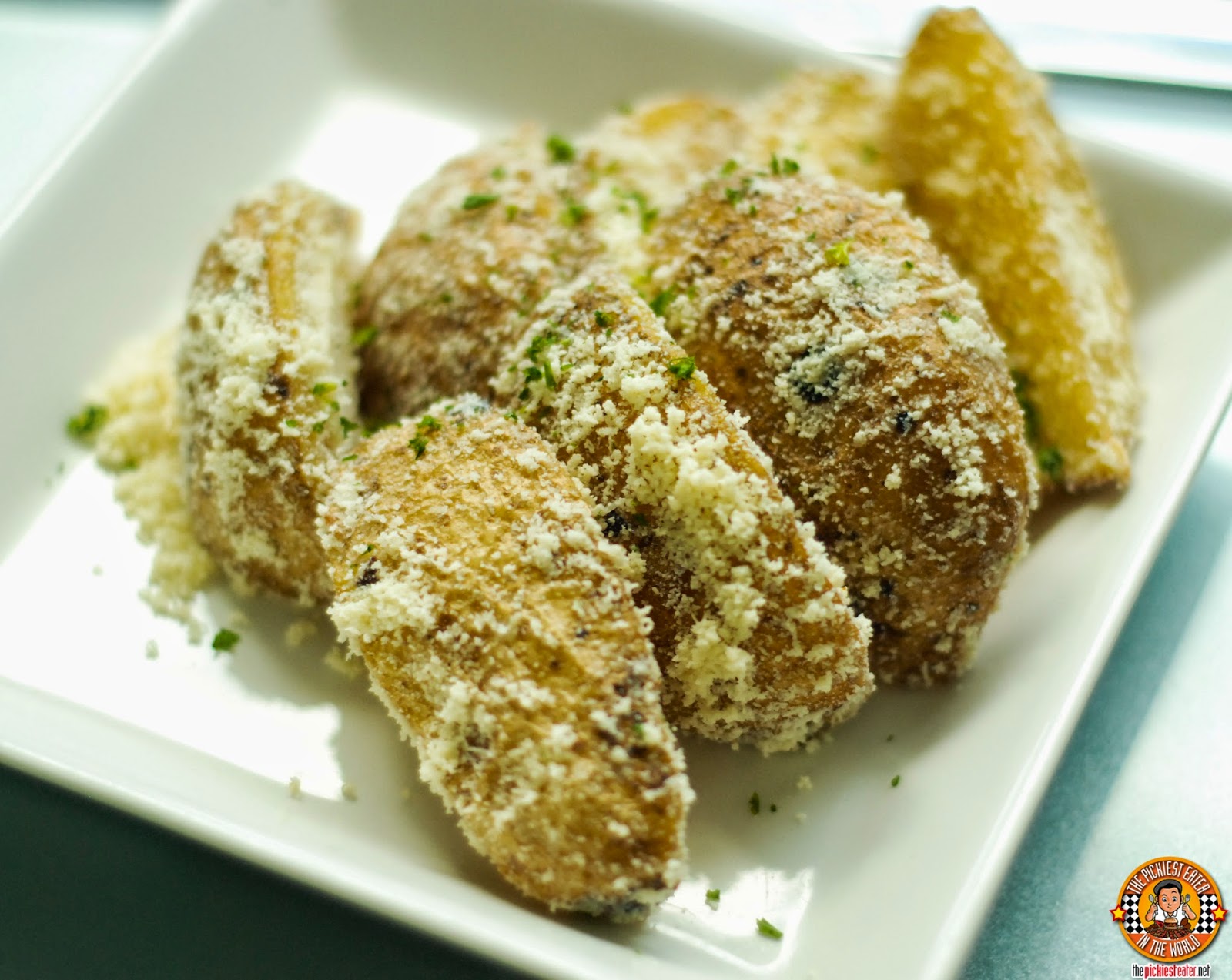 For our trimmings, Rina and I enjoyed the Parmesan and Truffled Fried Potatoes (P280). True to its name, the thick potato wedges were generously dusted in Parmesan Cheese, with the potatoes imbued with the gentle taste of truffle. An ideal partner for your meat. 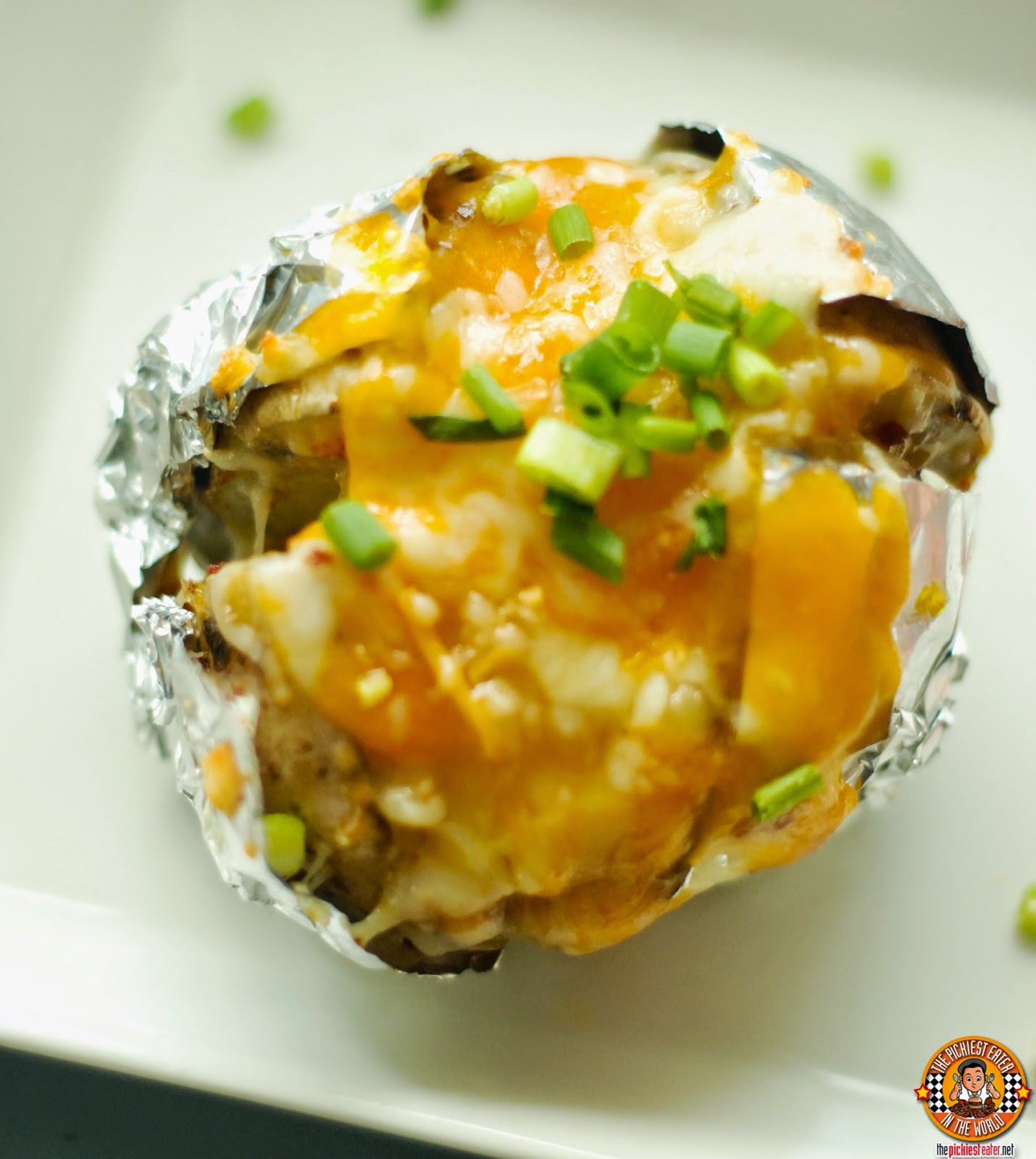 Rina enjoyed her Baked Potato, that was loaded with Melted Cheese and Sour Cream.

The Mashed Potatoes had a nice touch of cheesiness to it that gave it a subtle sharpness that melded perfectly with the creaminess of the potatoes. 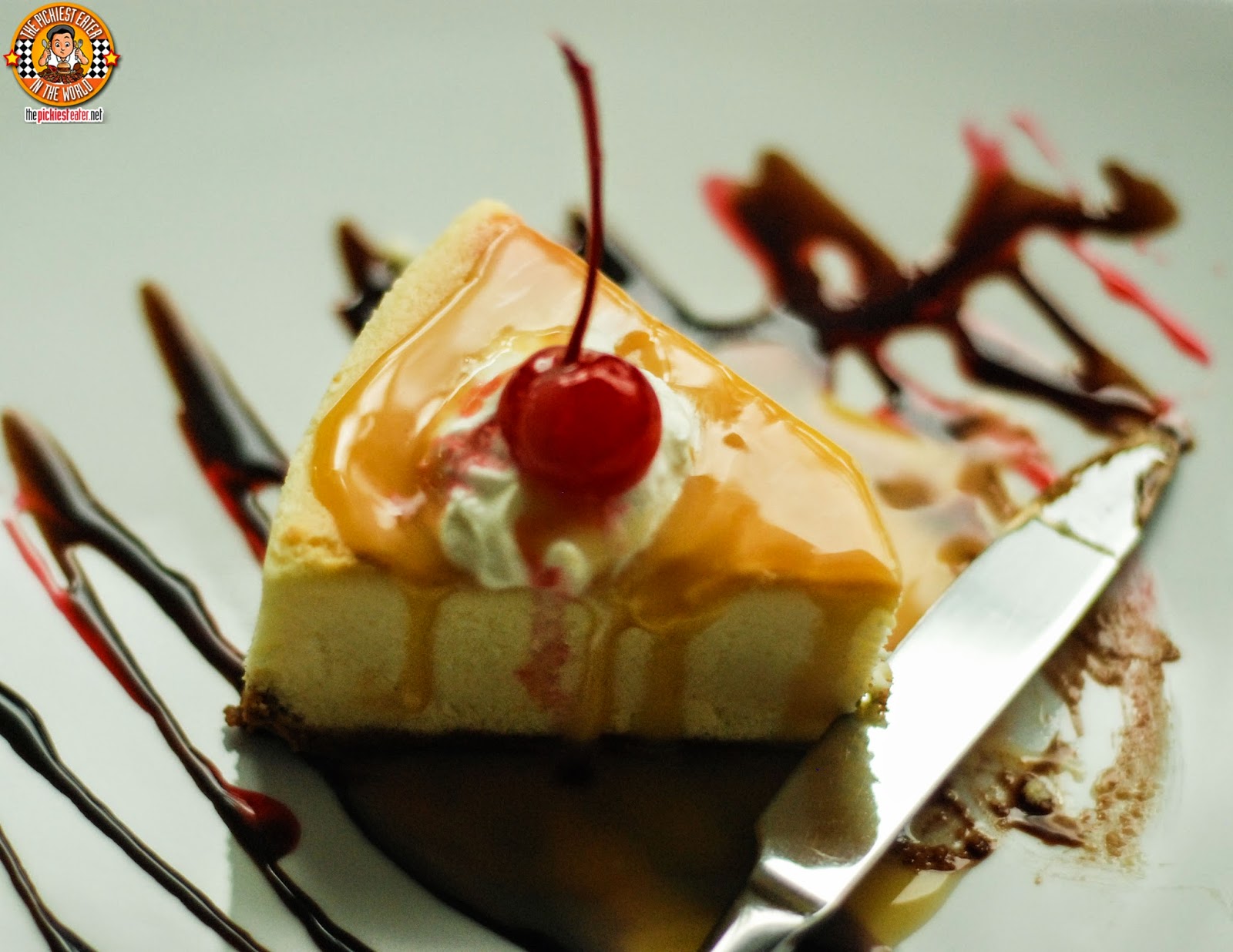 My friends were a bit too overzealous to try the New York Cheesecake (P180), they broke the cardinal Food Blogger rule and dug into it before letting the people in the other table take a picture of it (Yeah, you know who you are.. You should be ashamed of yourselves!!). This was a lot more dressed up than the traditional New York Cheesecake that I am used to, drizzled with caramel and whipped cream, with the proverbial cherry on top.

Though I wouldn't really call this a New York Cheesecake, It was still pretty good, so I understood why the other bloggers couldn't resist hehe.. 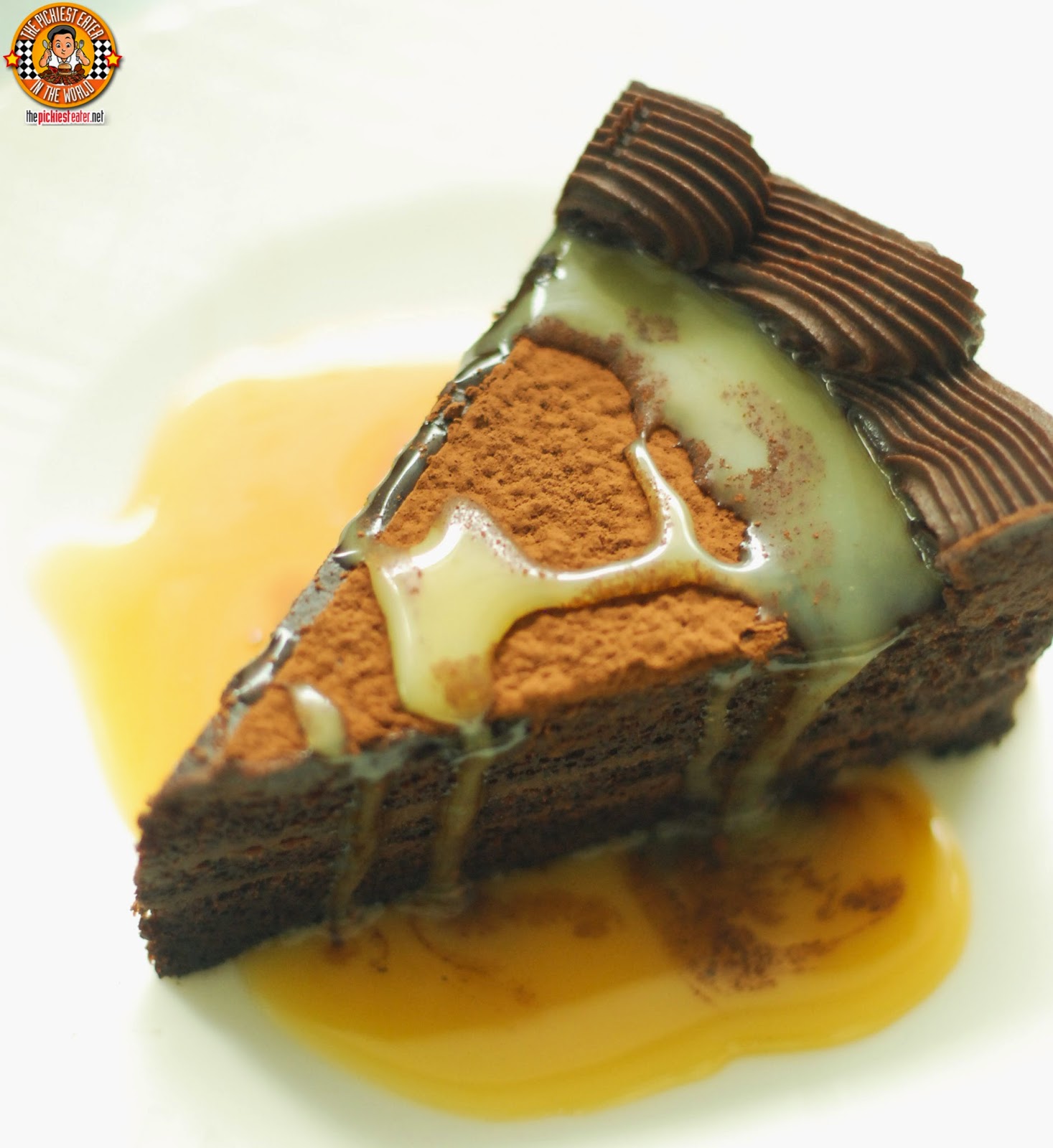 Rina was quite enamored with the A Steakhouse Chocolate Cake (P150), as it offered layer upon layer of chocolatey goodness, with a drizzling of caramel to give the right push of sweetness to your taste buds.

In terms of quality of the food, would definitely recommend A Steakhouse to someone looking for a steak meal in the South. The prices are very reasonable, and the quality of the meat is quite exceptional.

Something that A Steakhouse needs to work on is the flow of their service, as the dishes came out a little longer than what we would have liked. But in fairness to them, I believe all the steaks were cooked to the right temperature that we specified, not to mention the food tasted excellent, and their staff, especially our attendant named "Alaiza" (Not sure if I spelled it correctly), impressed us with her very welcoming, sunny personality.

Once their work flow becomes more efficient, A Steakhouse will certainly put the best steakhouses in the South on notice. 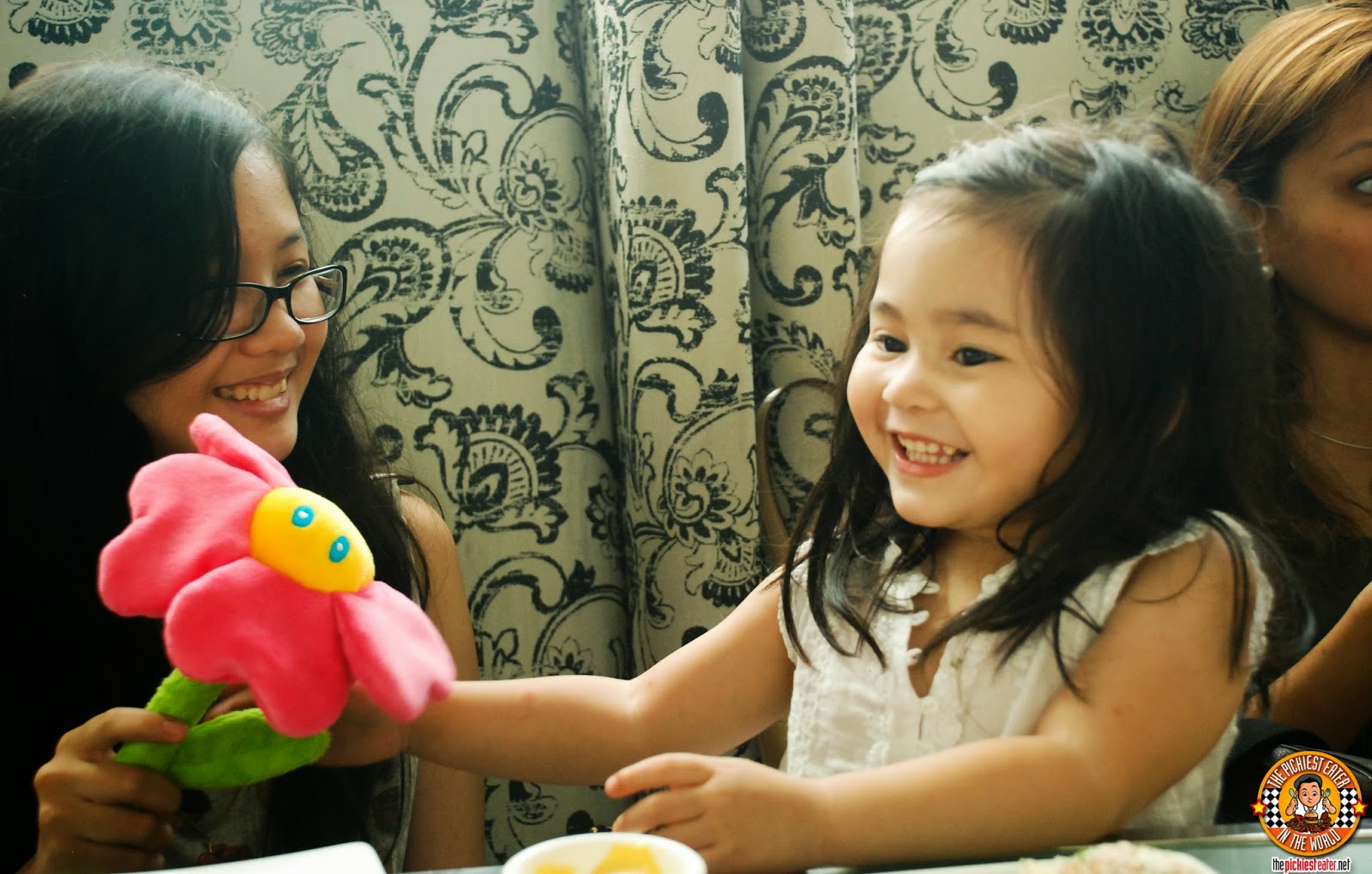 Baby Rain had loads of fun with her Ate Ella, the lovely daughter of blogger friends, Chuckie & Yen Dreyfus! 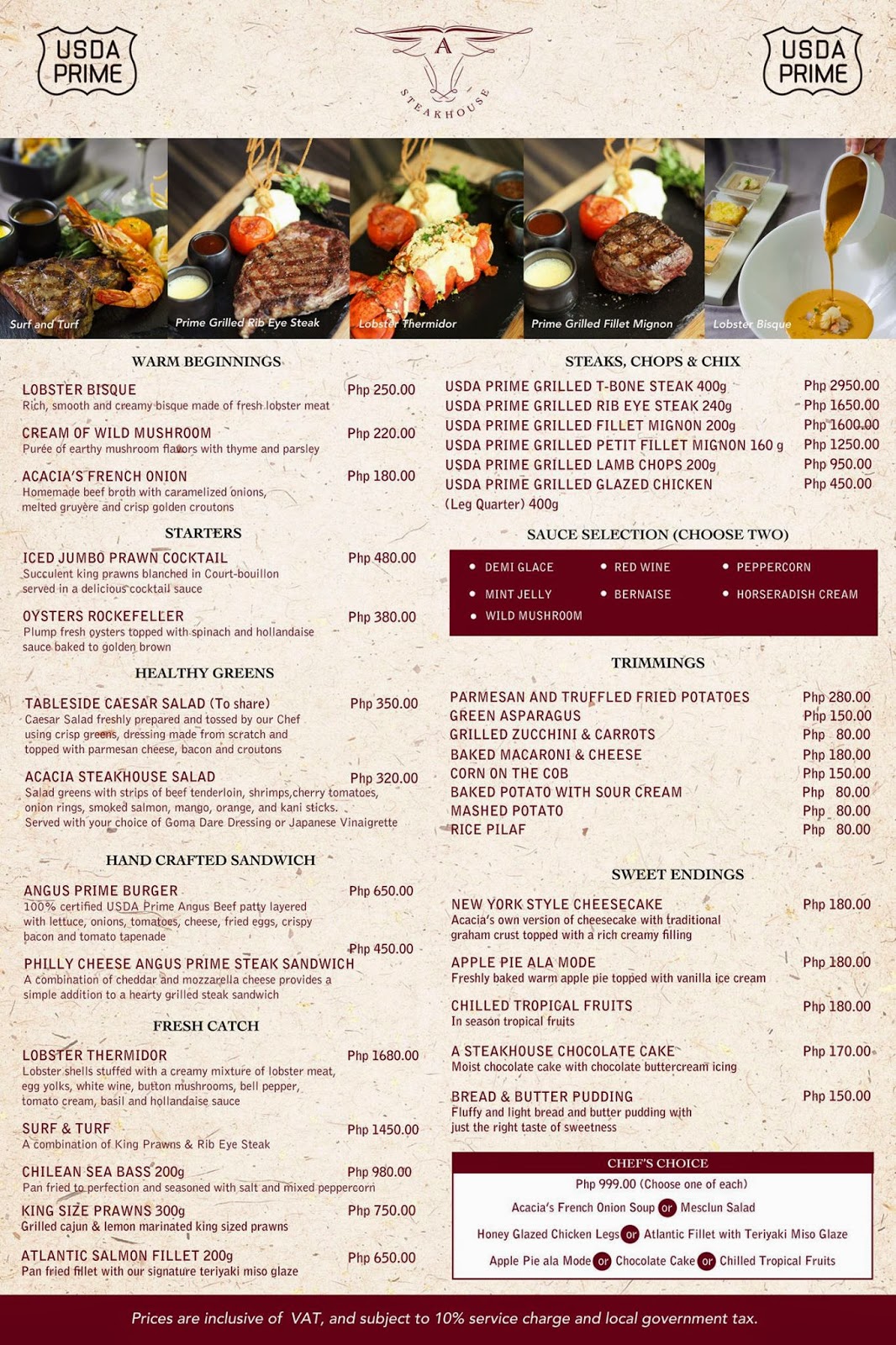 Posted by The Pickiest Eater at 1:39 AM

Email ThisBlogThis!Share to TwitterShare to FacebookShare to Pinterest
Labels: A Steakhouse, Acacia Hotel, Alabang Hotels, Restaurants in Alabang, Steakhouses in Alabang, where to eat at alabang