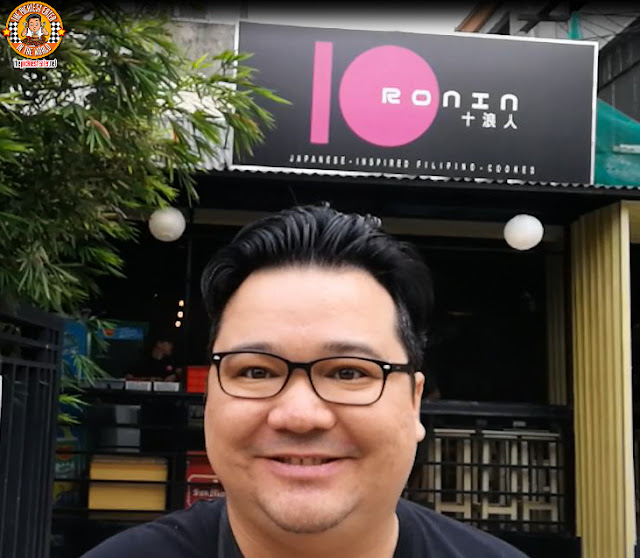 When I began the blog, my intention was to be able to visit the smaller restaurants that needed help with marketing. Social Media was pretty new at the time, so anything you could get on the internet had a chance of being a big help to small businesses. As much as it worked out that way, I also had the good fortune of becoming friendly with the larger establishments, such as international hotel and restaurant chains.

As much as I appreciate being in the good graces of these industry Titans, I do make it a point to make sure I never overlook the small hidden gems of the hospitality industry that doesn't have the marketing machinery to keep up with the big boys.

One such gem I discovered was 10 Ronin, a Filipino Japanese Fusion restaurant located at the outskirts of Makati. 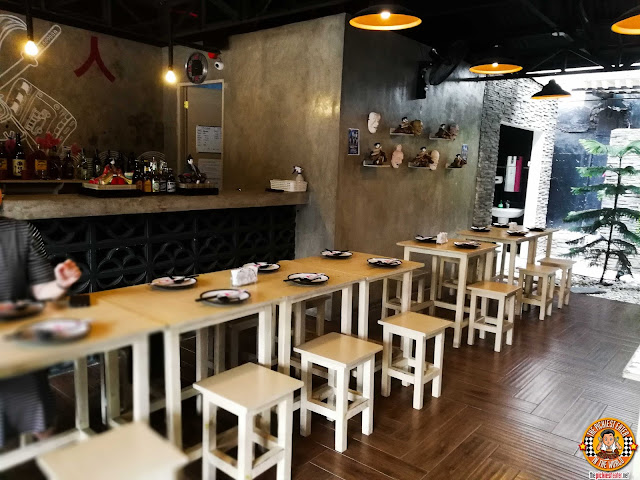 The charming restaurant has a concrete, industrial feel to it, with touch of decors from the orient adorning the walls. The place is not air-conditioned, however it was well ventilated with industrial fans strategically placed around the dining area. A small rock garden rounds out the Japanese Zen feels of 10 Ronin.

I was really excited to see the menu took put the Filipino dishes in the forefront of its fusion with Japanese dishes, and not the other way around, creating incredibly intriguing and unique gastronomic concoctions!
SMALL PLATES 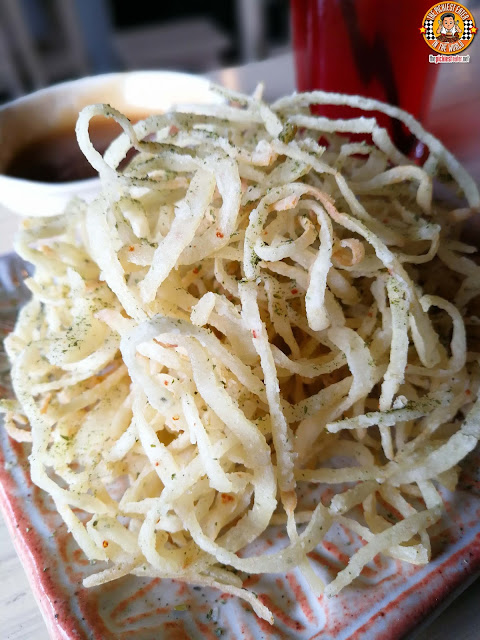 Starving, I happily dug into the Spiced Crispy Onion Frizzles (P95). The delicate onion strings were lightly seasoned and battered and deep fried to a delightful crisp, and paired perfectly with the side of Unagi BBQ Sauce. 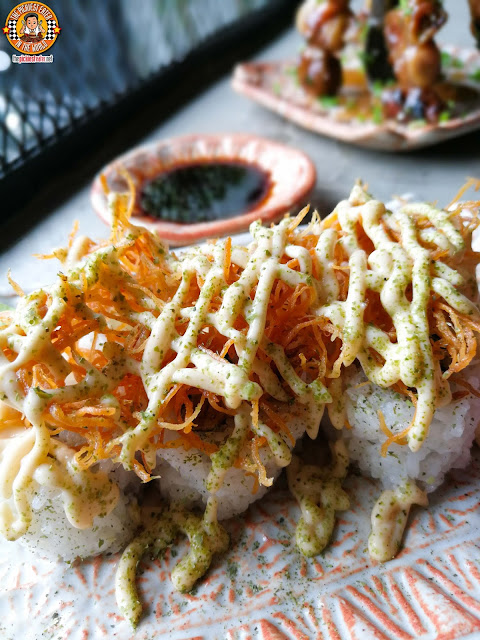 The Adobo Flakes Maki (P125) was an amazing fusion of two cultures. The crispy flakes offered a nice play of textures, and the drizzling of mayonnaise made it even more amazing. 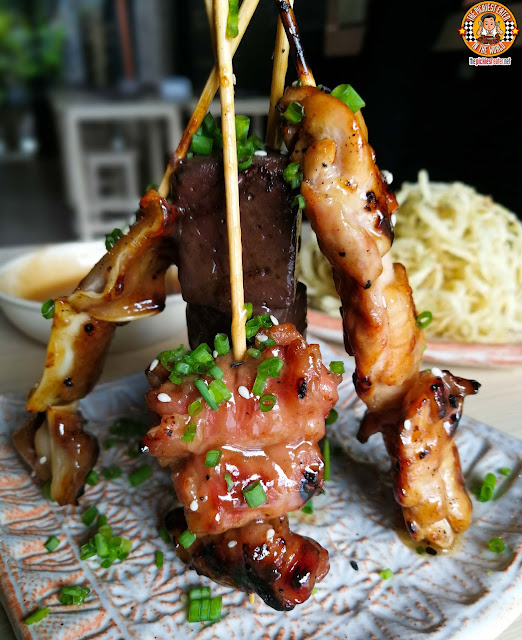 The Yakitori Platter (P295) is filled with a menagerie of skewered meats, such as Pork Blood, Pork Ears, Bacon Wrapped Chicken Liver, Beef Belly, Chicken Thigh. A Fil-Japanese Pulutan platter if I had ever seen one hehe.. 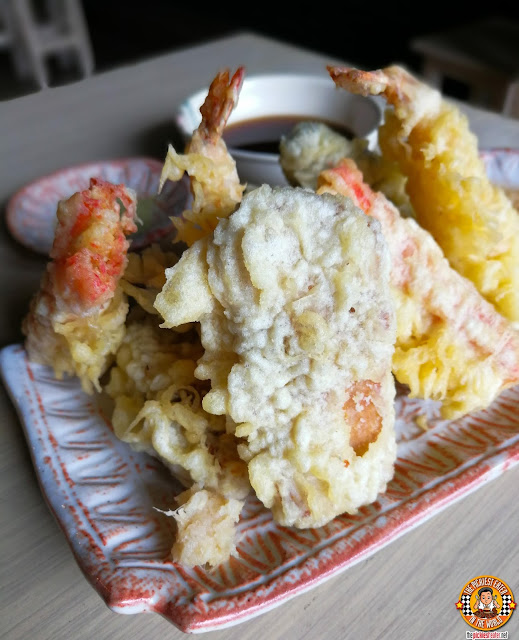 The Mixed Tempura Platter (P220) offered a medley of different types of breaded, deep fried delights. More than just Prawns, the platter also included Sweet Potato, Fish, Kani and other vegetables. Not exactly authentic, however delicious just the same, especially with how they were able to ensure it wasn't too oily. 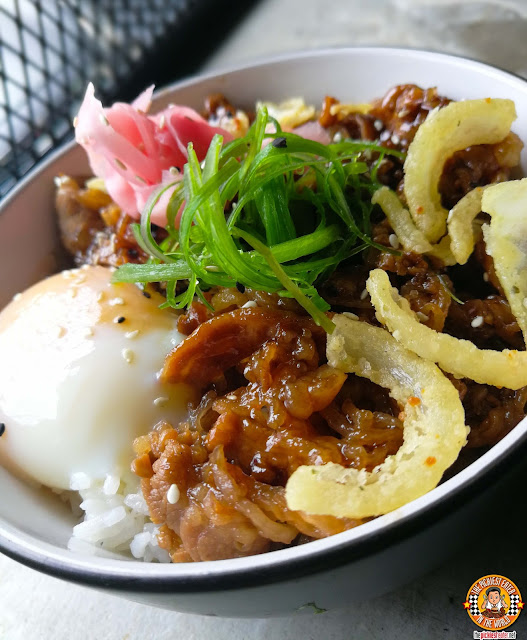 Another awesome fusion dish was the Ronin U.S. Beef Tapa Gyudon (P145). This was pure genius. Tender strips of cured beef, seasoned in a light sweet-soy marinade, then served over a bowl of rice, and a side of a perfectly cooked 65 degree egg.

The fusion of Pinoy and Japanese flavors continued with 10 Ronin's selection of Ramen! 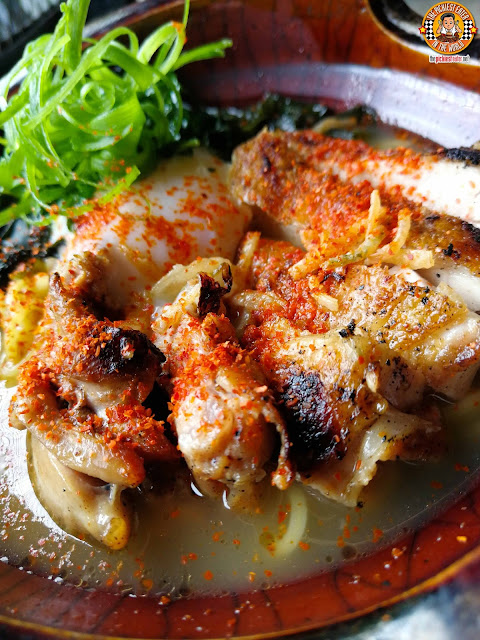 The Spicy Miso Tinola Ramen (P155) had the infusion of the comforting Tinola, topped with strips of chicken imbued with a touch of heat. 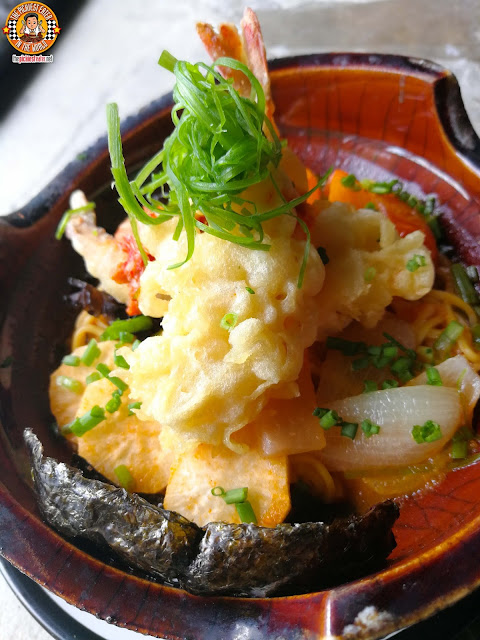 The Spicy Kimchi Sinigang Ramen (P240) was my least favorite of the soups, although it had the required acid that one would look for in Sinigang, as well as a gentle kick of heat. 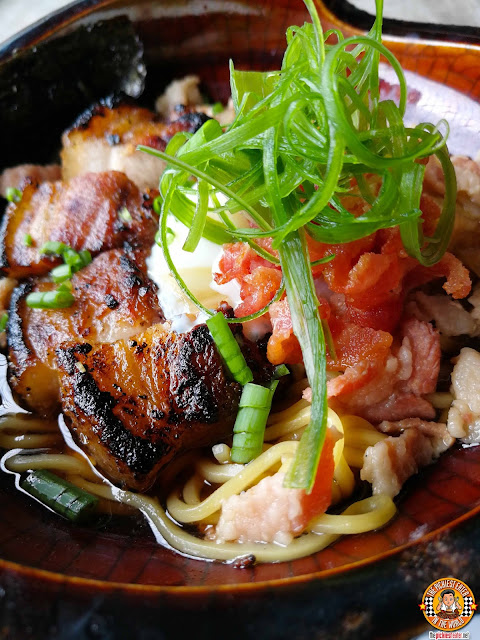 I think it's a no brainer that it was the Bacon and Grilled Adobo Cha Siu Shoyu Ramen (P155) that I enjoyed most. It had a wonderful meatiness that made for a great soup dish, that was hearty and satisfying. 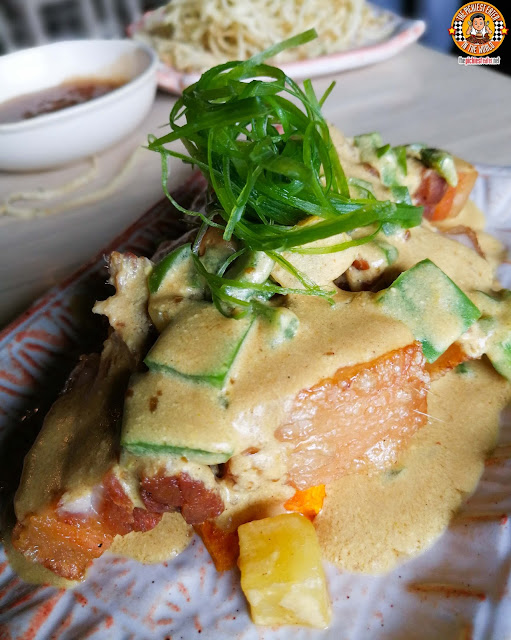 One of my favorite dishes from 10 Ronin was the Bagnet Japanese Curry (P195). The curry was creamy and fragrant, and it draped over the crispy bagnet beautifully. The curry and deep fried pork just worked seamlessly together, making it impossible to not eat with rice. 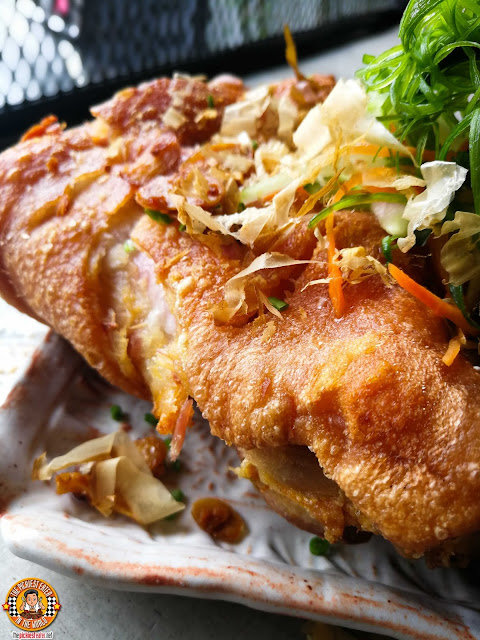 The crown jewel of the meal was the Corned Crispy Pata (P450). This was a glorious deep fried pork hock, topped with Crispy Garlic Bits and Bonito Flakes. Though the meat was seasoned like a pro, it also matched well with the Unagi BBQ Sauce. 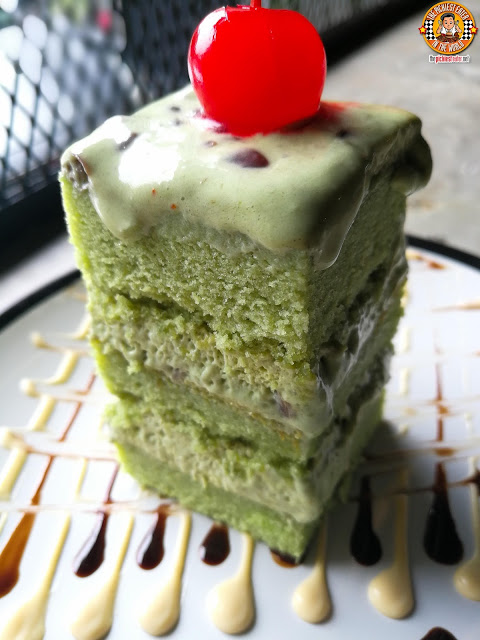 I'm not a fan of Matcha by any means, but I enjoyed the Azuki Matcha Cake (P150), as it didn't have the strong leafy finish that I tend to dislike. This one had a delicious creaminess that played well with the gentle earthiness of the matcha. 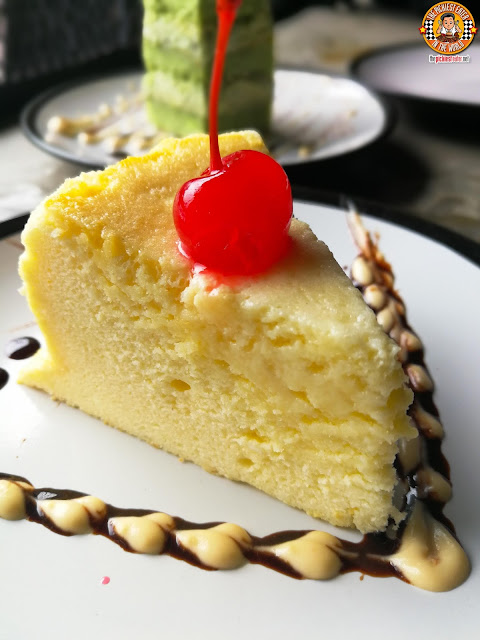 As good as the Matcha cake was, I preferred the Japanese Cotton Cheesecake (P150), which was incredibly light and had the right amount of richness. The plate is drizzled with cream and chocolate syrup, which serves as a nice breaker in case it comes off as too cloying. 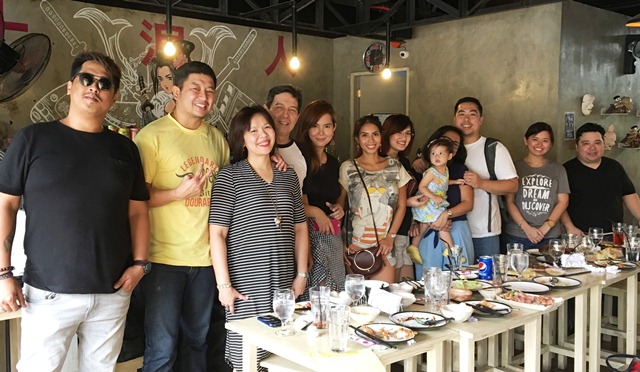 The creativity put in incorporating two different cultures into one cohesive dish was incredibly impressive, with each dish seemingly more delicious than the next. A great personification of Filipino-Japanese Fusion dishes.

Unfortunately since my visit, 10 Ronin has closed its doors, and is in the midst of a relocation. However, if you're interested in their dishes, you may simply contact Vincent Juanta at 0998-5103235 for catering services! 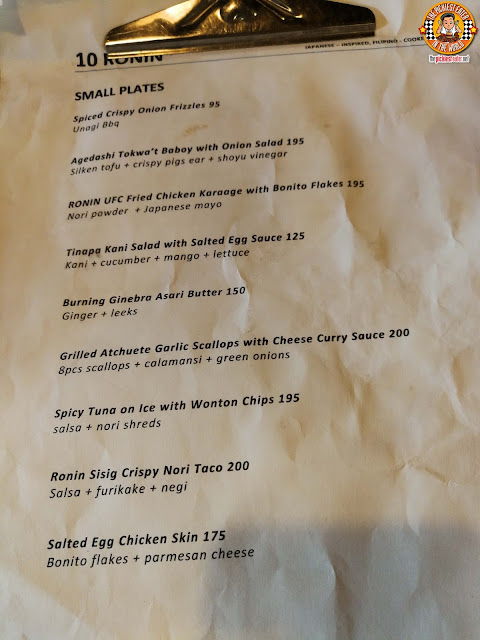 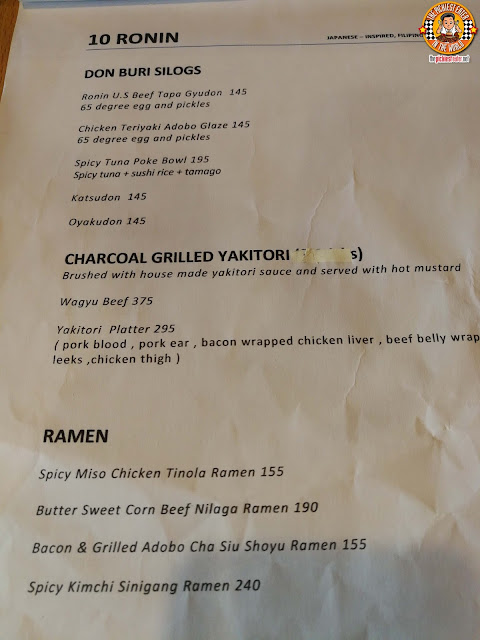 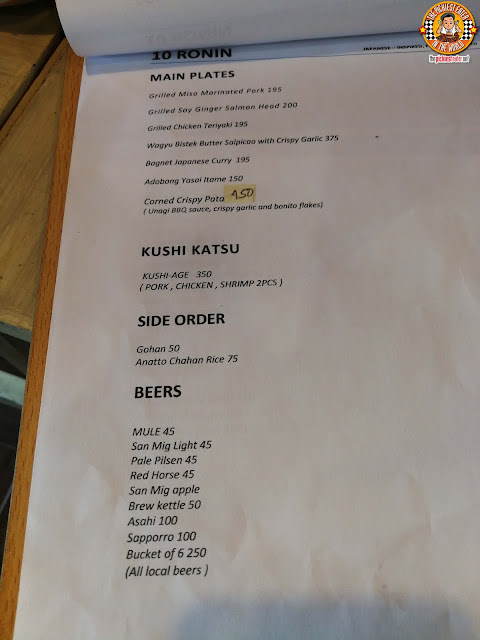