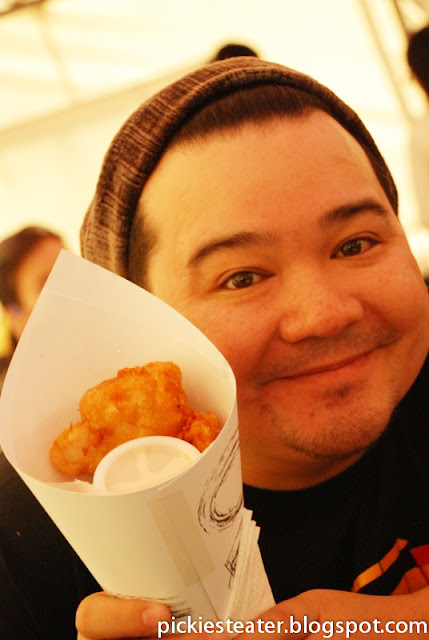 My version of a "Bouquet'

My Mercato Centrale Chronicles continued with a Sunday visit. Rina got out of work by noon, so we sped to BGC and got there a little before 1pm. Since they close at 2pm, I knew I had my work cut out for me. We were both starving, but of course, if there was anyone who could do this, it was me.
First thing I noticed on my second day, that I didn't during my first, was the live performer. There was a guy doing an acoustic set and.. well.. he was kinda awful. And though his singing wasn't very easy on the ears. the smell of the food all around me was easy on the nose, and helped drown out his warbling. But then at the end of the day, I realized it really didn't matter who sang. They could've had U2 there as their special guest and I wouldn't have noticed because I was so focused on the food.
If you've been to Mercato Centrale, you know what I'm talking about. 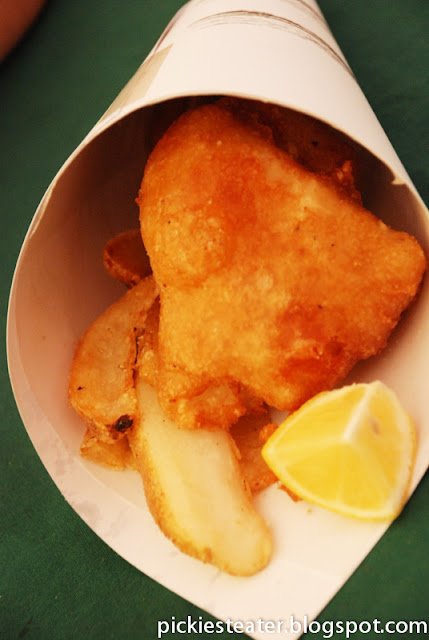 When I was there the day before, I noticed practically every other person I saw was walking around with these paper cones. As they walked past me, the rich aroma of fish and chips was undeniable, that I knew this had to be my first stop upon my return. Judging from their Beer Battered Dory (P150) alone, Chuck's Grubberie has one of the most amazing fish and chips you will ever try. The outside crust has a wonderful crunch to it, and adds to the flavor of the fish. The fish itself was cooked to perfection, leaving it's meat a pristine white color, and a softness that would even cotton would envy. The Potato "Chips" are also beautifully fried potato wedges that  go perfectly with your fish. Though one order only has two (rather good sized) pieces of fish fillet, fear not, because for an extra P50, you can add another piece. Chuck's Grubberie also offers a variety of other fish, namely Red Snapper, Mahi-Mahi, and Orange Roughy.
Perhaps my only qualm with Chuck's Grubberie was the small portion of Tartar sauce they gave me. After devouring one fish, I had practically run out of sauce. Good thing it's good on its own, or there would have been hell to pay. 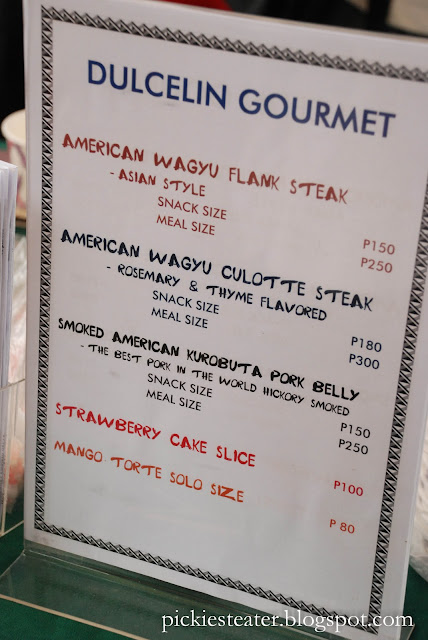 Awesome cakes AND kick ass meat dishes? Dulcelin, I think I love you.
While I was waiting for Rina to finish up work, I scanned through her pictures of Day One, and noticed the most incredible looking Beef Brisket - which I couldn't believe I let it slip by me. I realized that I didn't want to grow old and tell my kids about "The one that got away", so I made sure to be on the lookout for it on my return trip (Rina couldn't remember where exactly she saw it). As I scoured the different Grill stations for the home of that Beef Brisket, I stumbled upon Dulcelin Gourmet - the makers of the Strawberry Shortcake and Mango Torte that was such a big hit during my family's Christmas Dinner. Rina swears that this was the place where she took the picture of the Beef Brisket, but sadly, what they had didn't look like it, although they did have something similar.
Nevertheless, when I saw They were serving "Smoked American Kurobota Pork Belly", for P150 ("Snack Size" was enough for me because I was planning on eating a lot more), I thought that was a steal, so I got myself an order. From what I've heard "Kurobota" is to Pork, what "Wagyu" is to Beef, so I was expecting the most tender piece of pig I've ever tried in my entire life. 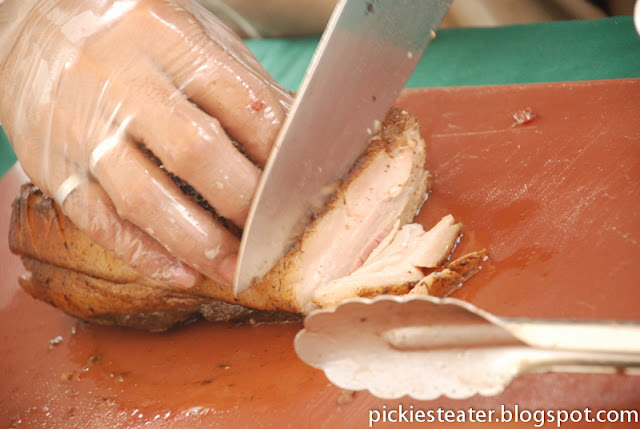 Someone really needs to invent "Smell-O-Vision"

Just watching the carver slice the meat was like a religious experience for me. He went through slab of meat like it was butter. Every thin, delicate slice came off with no problem at all. Not to mention it smelled fantastic. 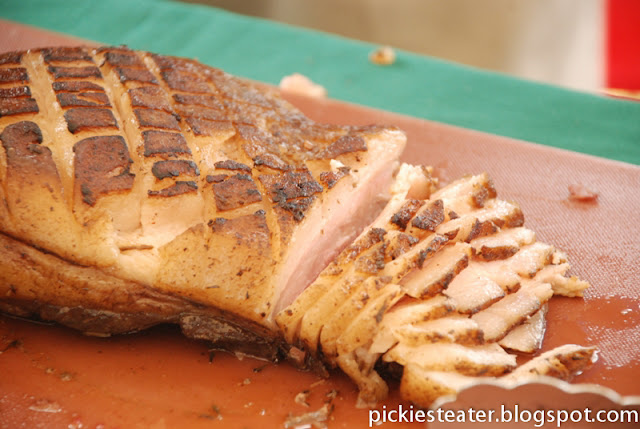 Don't try touching it. You might smudge your screen.
In a span of ten seconds, he had a whole order ful ready. I loved looking at the slab of meat left over.The fat on top had the most amazing char marks on it, and the smokey scent of the meat told me this piece of pork was cooked perfectly. I was contemplating stealing the whole thing and making a run for it, but Rina didn't allow me (spoilsport). 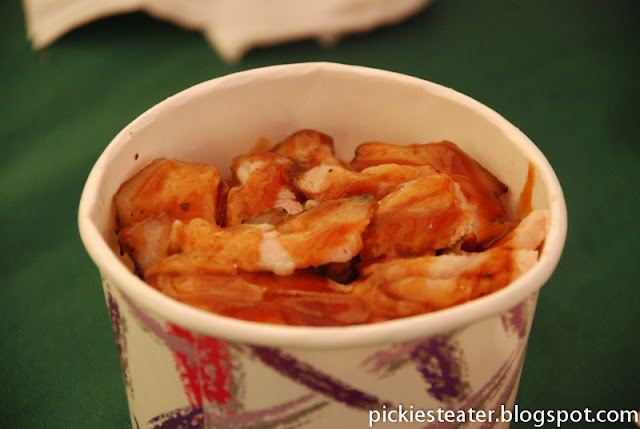 "Snack Size"? *Face Palm* What the hell was I thinking?
The meat was as soft and flavorful as I had expected it to be. If Kurobota is supposed to be top of the line pork, this dish proved it. Considering the price, the portioning of the order was just about right, so I had no complaints about that. But I did have a bone to pick with Dulcelin. I know BBQ sauces, and theirs tasted like something ready made by Hunts or Kraft. It has a nice sweetness to it, but there's something about it that makes it taste common. Imagine having a Ferrari, and adding the decors of the Sarao Jeepney to it (including that "Uh-huh-huh-huh-huhhh" horn). That's what it felt like to me. (Did that even make sense, though?) 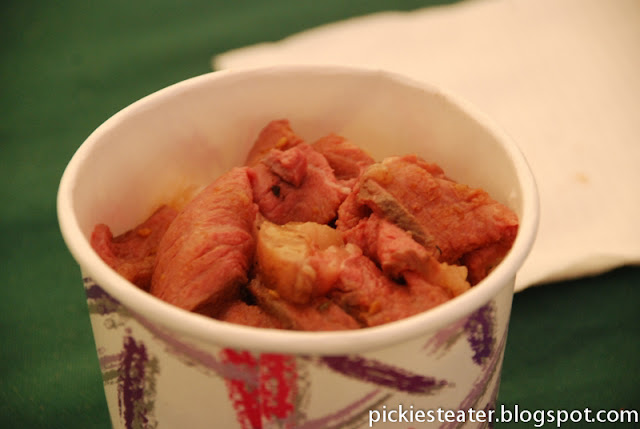 Rina ordered the American Cullote Wagyu Steak in Rosemary and Thyme. Again, the meat just simply melted in your mouth, and the tastes of the herbs melded into the meat amazingly. She liked this dish so much, she ended up getting ANOTHER order after that (She always seems to find ways for me to fall in love with her more and more).
FLAMED 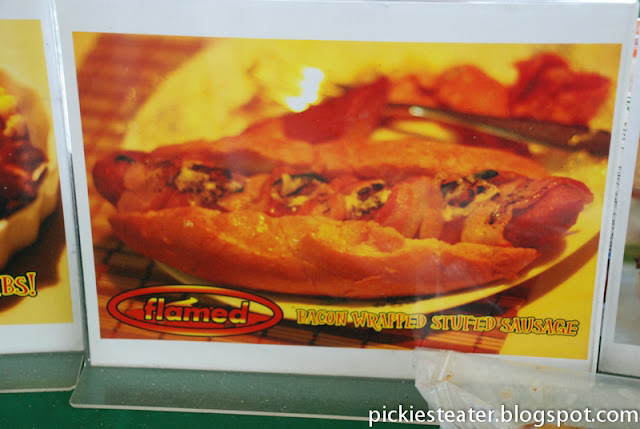 Will art imitate life?
I'm sure it comes to no surprise to anyone that knows me that the "Bacon Wrapped Stuffed Sausage" (P135) of the stall called "Flamed" immediately caught my attention. I was already a little bit full from the Fish and Chips, and my Pork Belly, but again, I felt this was a must try. 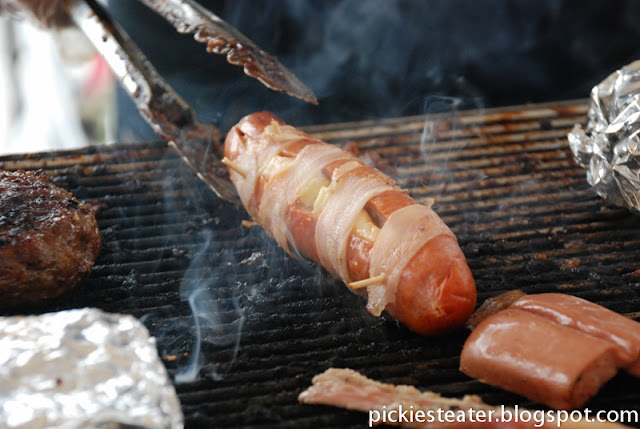 
Looking at it, it seemed very promising. There were four strips of Bacon, and you could see the abundance of cheese stuffed into the sausage. I went back to my table with high hopes for this. 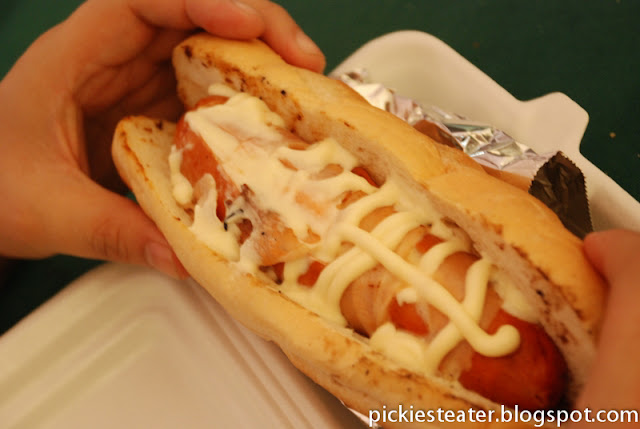 A little flat in the execution


Unfortunately,  It was a rather disappointing dish. Although I'm quite surprised something like this could actually fall flat on its face, this Sausage actually did. First off, the bread was dry and hard. Secondly, the sausage wasn't very good, and matched the dryness of the bread. 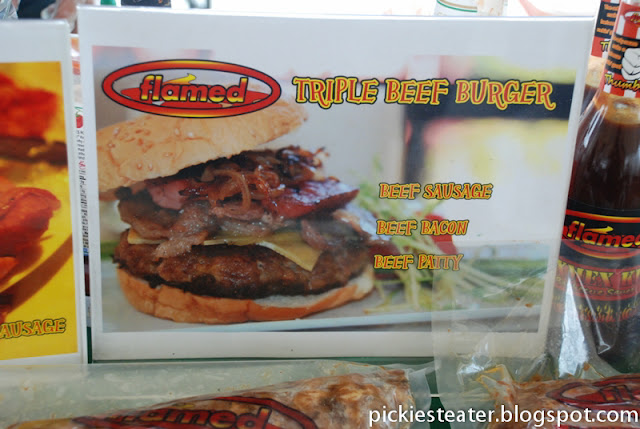 These guys have the right idea though
Perhaps I should have orderd THIS instead?  But if they use the same sausage and same bread, I can't imagine it being much better than the Sausage.
MOCHIKO 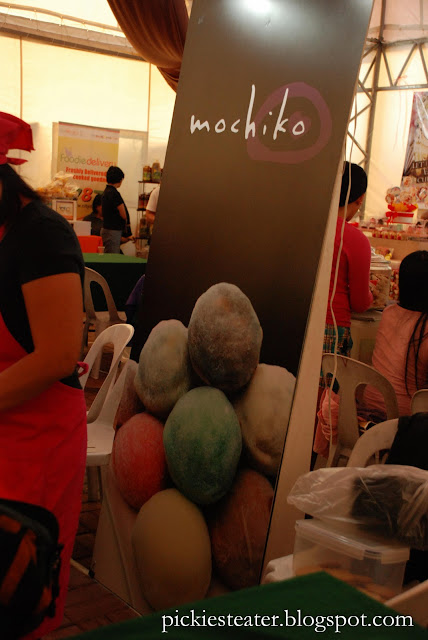 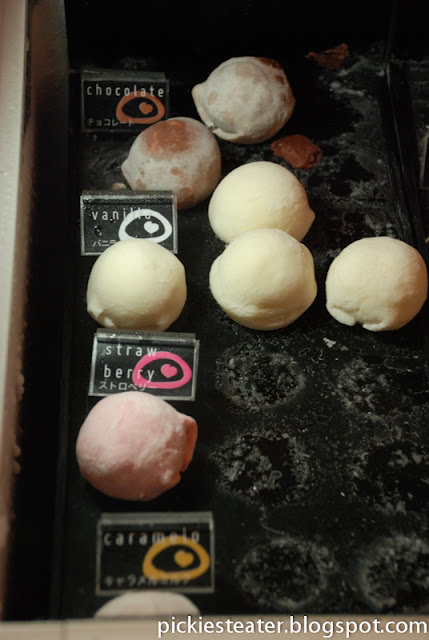 
Between the Strawberry, Vanilla, Chocolate, and Caramelo Flavor, I knew Rina would like the Chocolate  (P70 per piece). They advise you to wait around five minutes before biting into your ball, just because otherwise it might hurt your teeth. I bit in right away, and yeah, Its best to follow their advice. As expected Rina loved it and even went back for the Caramelo one. (She enjoyed the chocolate more though) 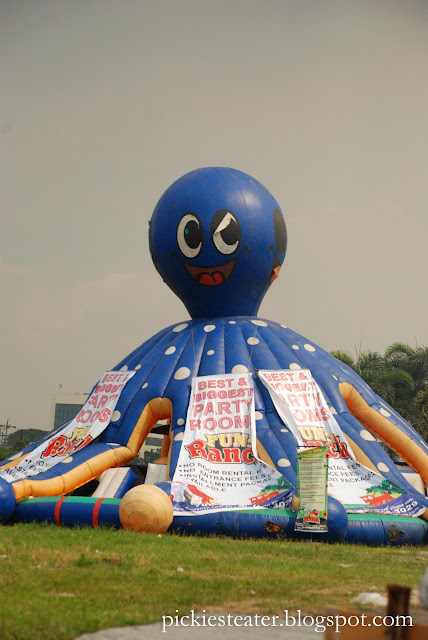 How awesome would it be to jump around in that?!?!

We left with me being upset with Rina for not letting me play inside the giant Octopus. She kept saying something about me punching a whole through it if I tried to bounce on it. (I told you she was a spoil sport)
Posted by The Pickiest Eater at 12:06 PM