THE SPIRAL AT SOFITEL CELEBRATION 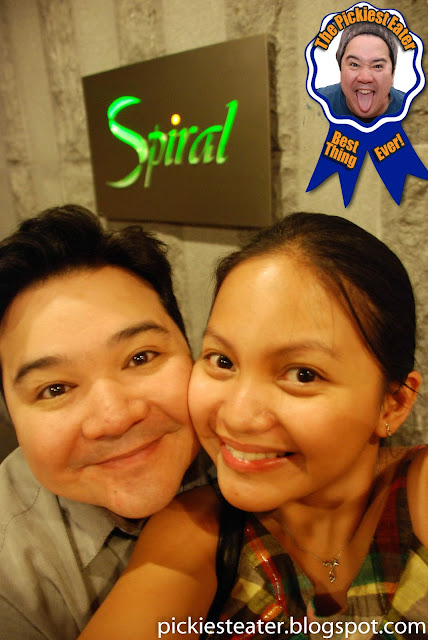 Spiral, we have arrived. Brace yourself.
When the Mr. MyfoodTrip contest began, I had to fill out sort of a questionnaire, just so people of the myfoodtrip.com community could get to know me better. One of the questions I was asked was:

"Name your top 1-3 favorite restaurant/s, and your reason for liking it/them"
My answer was Brazil Brazil!, Harbor City in Cebu, and Spiral in Sofitel.
My reason for Spiral, was this:
"Food as far as the eye can see. How can this place NOT be among my favorites? Spiral cafe has what I believe to be the longest buffet line in the Philippines, bringing together cuisines from around the world into one magical place. (Yes, Virginia, a place like this actually does exist) I usually start at the Italian section by grabbing a slice of Pizza, just so I have something to munch on while I'm walking around. The place is so huge, and the choices so many, you'll probably be moving around a lot, so you'll be getting a healthy work out AND a great meal in the process! (I keep telling myself that and yes, It helps me sleep at night)."
So when I won the title, I thought it would be appropriate for Rina and I to celebrate at - where else?

A couple of months earlier, Rina went to me to tell me she really misses Spiral, and would like to go back soon. My wife, rarely asks me for anything - I kid you not, so when she does ask for something, I always take it seriously. Timing, this cool website called "Cash Cash Pinoy" was offering a deal for Spiral that gave you 50% off the price of their buffet. Believing it was a sign, we were quick to take advantage of the deal, and promised to set a date for us to use it. 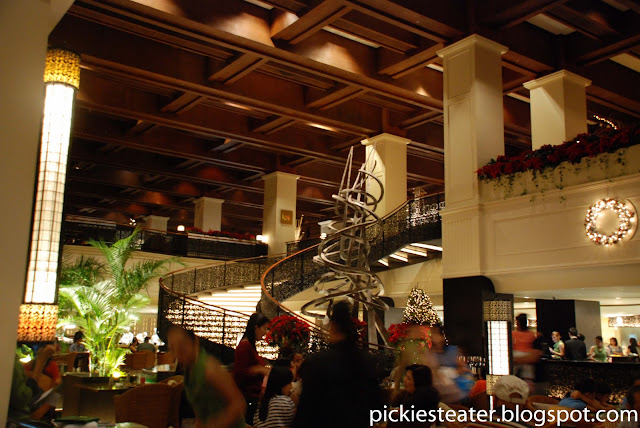 Stairway to Heaven
I remember the first time I went to Spiral at Sofitel Philippine Plaza. I was a little bit annoyed because my boss told me we had to work on a Sunday. He asked me to go with him attend the birthday party of one of our clients, who happened to be a good friend of my boss. I had no idea where we were going to go, but he just kept telling me, "I'm sure you're going to enjoy". I was a little bit embarrassed to go, because, as cool as this particular client was, I think it was an intimate lunch for close friends and family, and I was neither. Regardless, when I saw him, he made me feel my presence was very much welcome (I told ya he was cool).

As we entered the Spiral, I was awestruck. As I stood in front of the vast dining area with my eyes wide open and my jaw dropped to the floor, I imagined this was how it must have felt like the first time I went to Disneyland. I seriously didn't know what ride to line up on first, but I just knew I had to try them all!

As far as I know, this is the longest buffet line in the country. Nothing I've ever seen comes close.Oh and by the way, my boss was right. I DID enjoy.

Last year, I was fortunate to have gone with my boss to Spiral for breakfast for a business meeting. His meeting took longer than it should have, prompting him to ask his 12 noon meeting to meet him at Spiral for lunch, instead of him having to go out to meet him.

Meaning, I had Spiral buffet for Breakfast, and Spiral Buffet for Lunch, the same day. I swear to god, I thought Kevin Spacey was going to be coming for me later on that night, for committing one of the deadly sins. The Arkansas bacon I had for breakfast hadn't even digested yet, and I was already in line for some prime rib for lunch. It made me think to myself, "This is probably what my life would be like if I won the Lottery".

Finally, the scheduling gods smiled at us, and we were able to set a date to celebrate our myfoodtrip win.. so it was off to Spiral we went..

Before I go any further, let me apologize for the pictures. The quality is excellent, but because Sofitel has a strict (and rather ridiculous, I might add) "No Taking Pictures Of the Food" policy, Rina had to to everything Paparazzi style. (I don't get that No Pix policy. Seriously. Do they think, I'm going to turn over the JPG files to a state of the art lab/Kitchen and deconstruct each dish to find out their super secret recipes) This isn't a complete gallery of what Spiral has to offer. 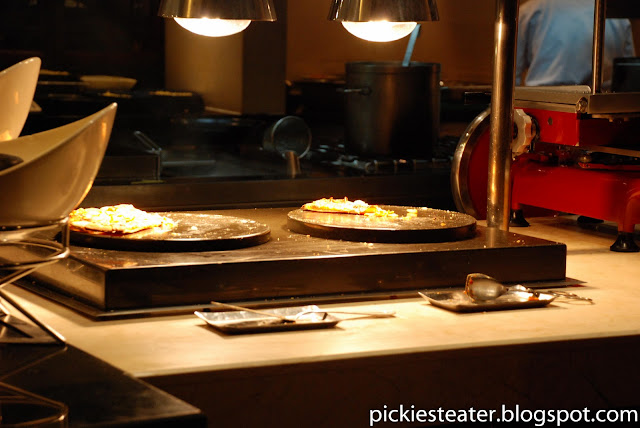 There's always room for Pizza
Like I mentioned in my questionnaire answer, I usually grab a slice of Pizza to munch on when I'm walking around. It also helps my patience when standing behind those weirdos who take forever to scoop food into their plate. (Some people meditate, other prays.. I eat Pizza to "find inner piece"). 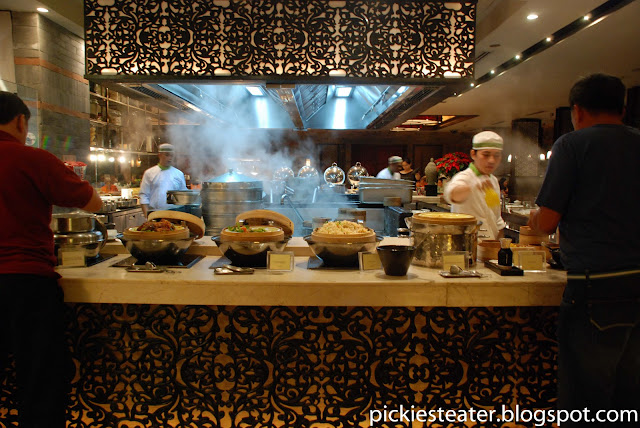 Can't resist Chinese Food
After grabbing my slice of pizza, I usually make my way to the Chinese Station to grab some dimsum, and Yang Chow Rice. They have Hakaw, Sharks fin, Pork Siomai and Asado Sio Pao, but I try not to get to many of those.. especially since I can get that at the nearest Hen Lin. Their Chinese dishes, usually something like Sweet and Sour Pork and Chop Suey, are usually top notch. 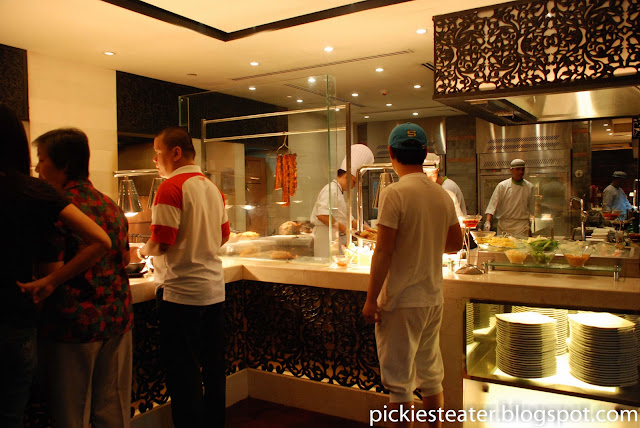 From far away, the asado looks like hanging bacon.
The Chinese Cuisine Section extends to a "Roasting Section", where you can grab some slices of Asado, and... wait for it.. Peking Duck! (One of my faves). On the other side. 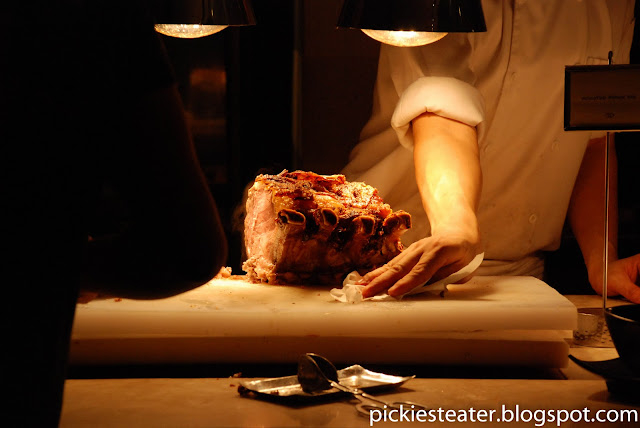 This Rib is so Kick ass, it should be called "Optimus Prime Rib"
For me, the star of the Spiral's lineup has to be their carving section's Prime Rib. I asked for the "Burnt" end of it, and it was spectacular. The meat was so tender, and you could actually see the juices spill out of the meat as it's being sliced. Douse it with their mushroom gravy, or even without it. It's awesome. 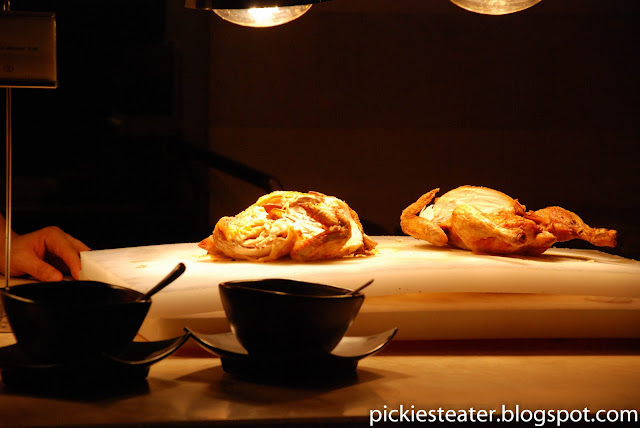 Winner, Winner, Chicken Dinner.
They also have roasted chicken, which is also very good, especially with its crispy skin. But i try not to eat too much of it to save room for my tummy for the other good stuff. (I can get chicken somewhere else). 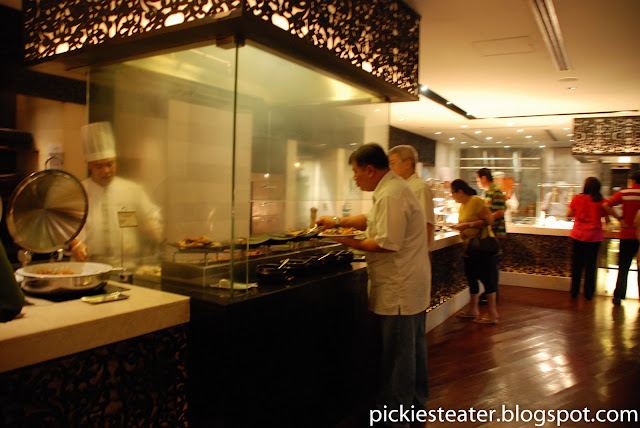 Smoke gets in your eyes.. and shirt.. and hair..
From the Prime Rib, I usually make a bee line for Spiral's Grill section, and load up on Lamb Chops.. They have other stuff, such as grilled chicken, Pork belly, and what not, but the Lamb Chops with the side of Mint Jelly they provide is too good to pass up. 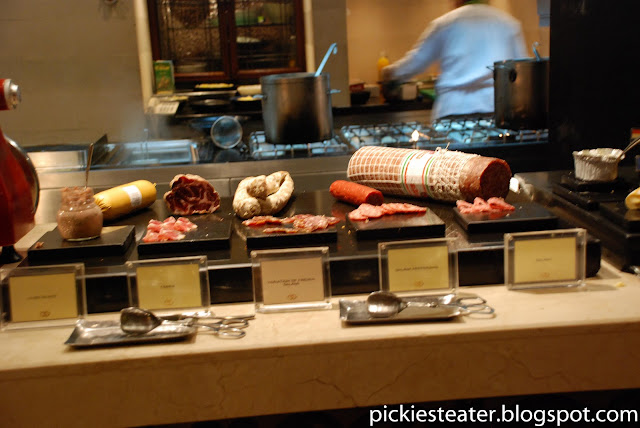 
The Deli Station has a nice variety of cold cuts and cheeses. The bread selection though isn't as wide as I would have liked it to be, As they only had french bread, some dinner rolls, and Sour dough.. And for some reason, they don't keep butter there. I had to order from the waiter. I ended up making quite a few finger sandwiches with salami and boursin cheese. It was fantastic. 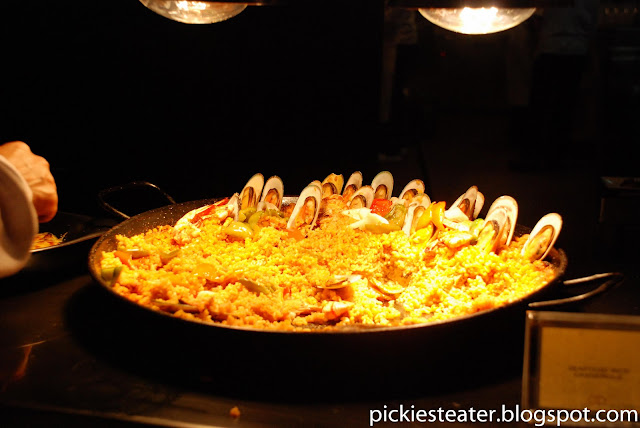 Good old, dependable, Paella.
The other parts of the European section featured Paella as their highlight. It was a good effort, but my Aunt makes the best Paella known to man, so everything else is substandard in comparison. 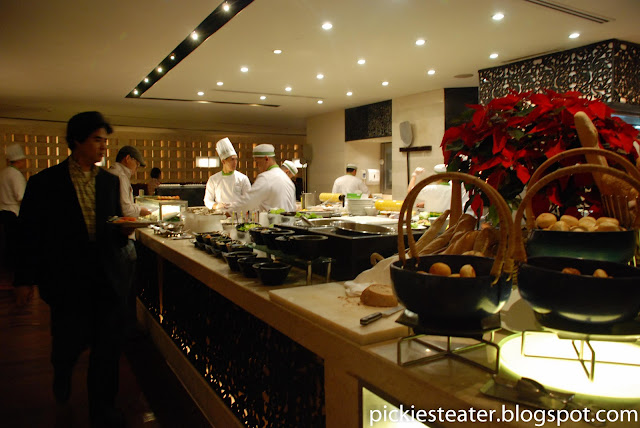 
This was the Salad Station. As you can imagine, I zipped by the place without bother to look at what they had to offer. 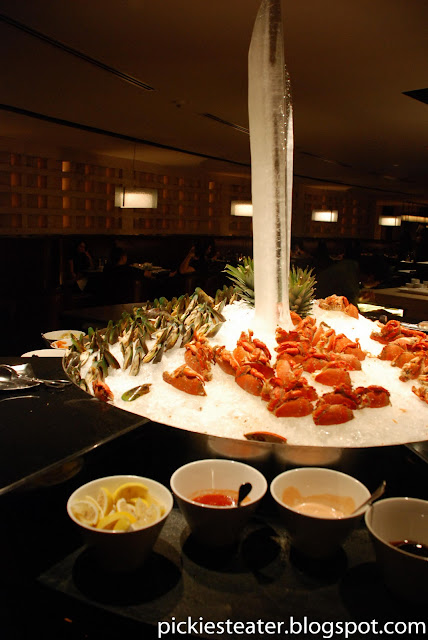 
Their cold bar seemed to be rather popular. It didn't interest me though.I prefer my food to be hot and not slimy.
Other stations that Spiral has but Rina wasn't able to take pictures of:
Japanese Station: The Shrimp Tempura is a hot commodity, so the line for this is really long. They have good Teppanyaki and other Japanese dishes. Rina loved the sushi bar. They also have delicious Sukiyaki.
Asian Station: Usually Korean, Thai or Vietnamese dishes. It's in the far end of the restaurant, and is often the most neglected.
Indian Station: Lots of spicy curries, long grain rice dishes, and different type of flat breads.
DESSERT 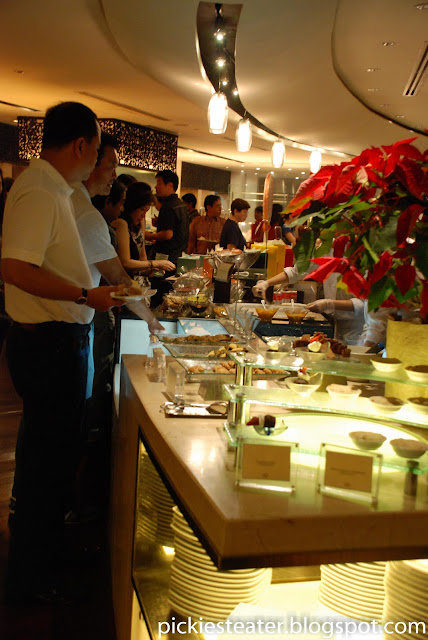 Spiral's Dessert section takes up a long length of the floor. 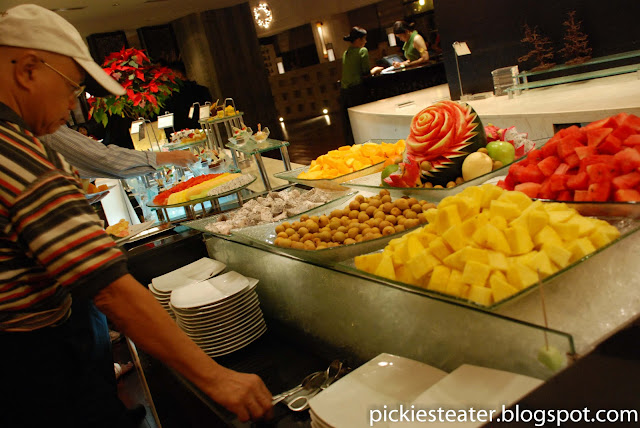 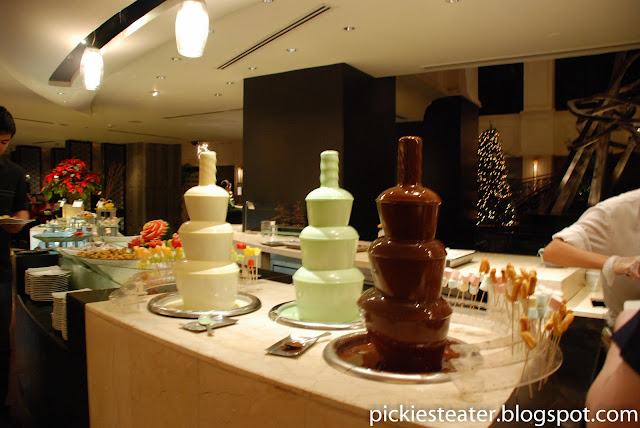 Three types of chocolate fountains (White Choco, Dark Choco, and Pistachio(?)) with a variety of goodies to choose from to dip into, and a wide selection of cakes, pies, crepes, and even ice cream. My favorite though is the Creme Brulee, the Churros Con Chocolate, and their Chocolate Chip Cookies. 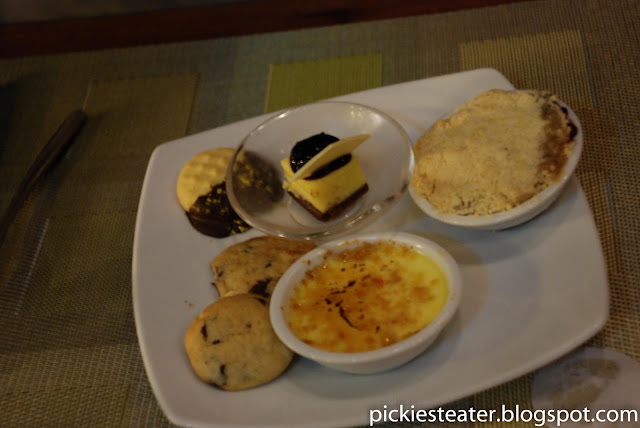 For me, Spiral really does have the best selection in the country today. The price, (Which is around P2,500 per person, depending what day and time you go), Is a bit steep, but if you can get a discount from Cash Cash Pinoy or other similar websites that are offering great deals, I urge you to take advantage of it, because the Spiral experience is something you should try at least once in your life. 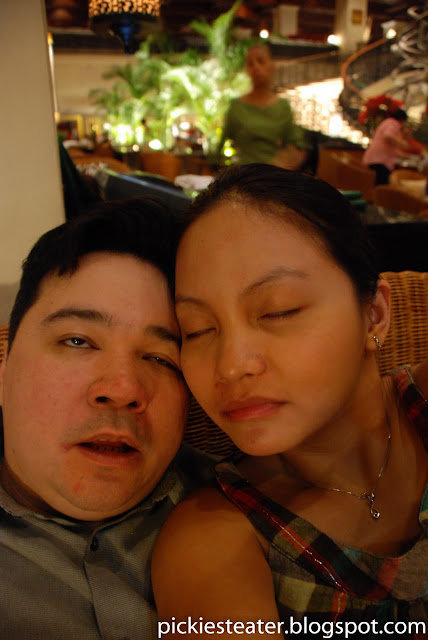 We were stuffed, I thought It was time for a little siesta. 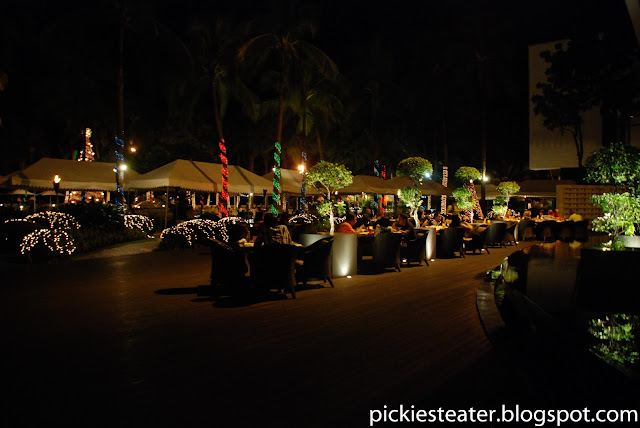 Smokers can choose to eat outside.. 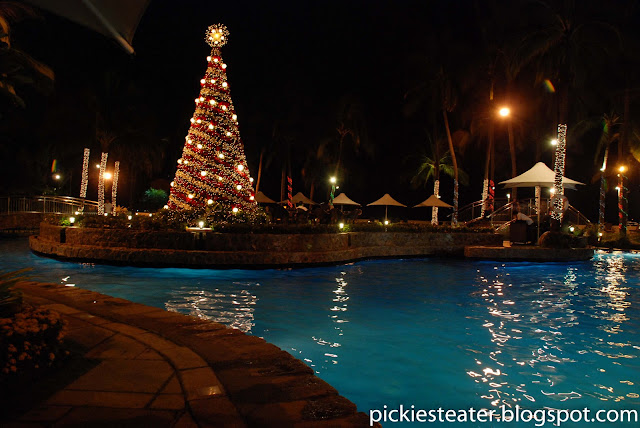 To get a view of their beautiful swimming pool.. 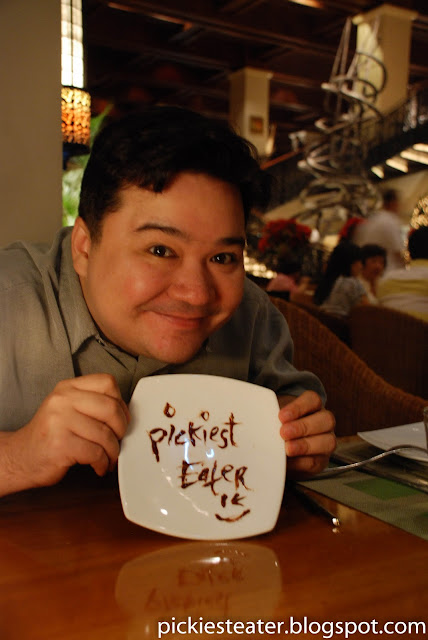 Rina made this for me!

Posted by The Pickiest Eater at 5:39 PM