WHO LET THE PIG OUT?! 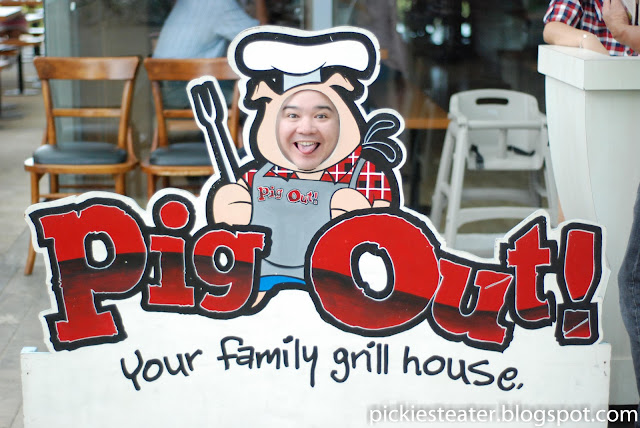 It finally happened. I've eaten so much pork, I've transformed myself into a pig.


During the Christmas break of 2009, a group of my friends from work, together with Rina and I, went on a road trip to Laguna, with the intent of going to Enchanted Kingdom. Given that it was the Christmas season, It should have been a no brainer: Theme Park + Christmas Vacation = Chaos. That trip eventually turned into our visit to Kanin Club, which we all thoroughly enjoyed. However, as I mentioned in that previous post, The signs for the restaurant "Pig Out" stuck clearly in my mind.

I love the name, Pig Out. You instantly know it's all about the meat, and you can eat to your hearts content without being judged. In fact, I found it funny no other restaurant ever thought of using that name before, especially since it got my attention. I swore to Rina that she and I would eventually go back some day. Of course, since it was out of town, it wasn't really that easy to schedule an excursion to Laguna.

Funnily enough, roughly around one year to the fateful day that I saw that sign, Rina and I, together with my father in law, my sister and law Chaikka, and her irrepressible partner-in-crime, Don, had planned to visit our Aunt's vacation home in Batangas. I did a little research before I left, and I saw a dish that left me intrigued.. "Chicharon Fried Rice".

Given that dish in mind, I thought it would be perfect time to make a little side trip to Pig Out.  (Pun intended) 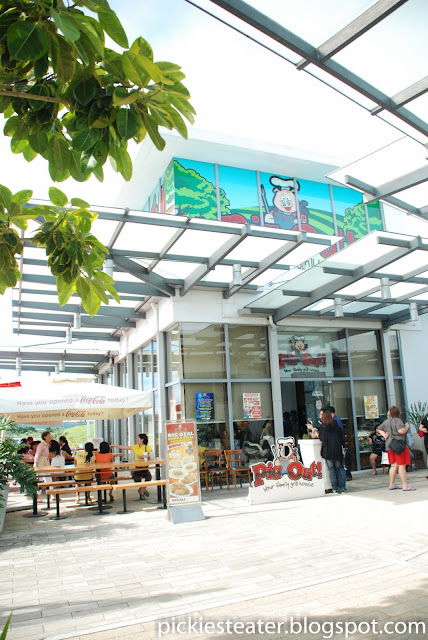 I hope they keep it this clean forever

Pig Out is located at the picturesque Nuvali in Laguna. It's basically like an arcade of restaurants and other establishments located by a man-made lake (at least I think it's man-made). I really hope they maintain the level of cleanliness because the place is absolutely beautiful. Amidst all the modern buildings around the area, the place almost looks like a park. 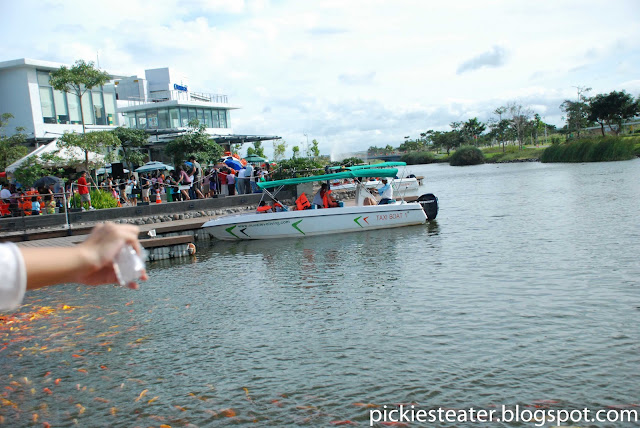 I love how they even have a dock that offers short boat rides to small groups. The lake is pretty small, though so it's a short boat ride. Outside, all the buildings look pretty much identical but I've used the term "Pig Out" so many times I spotted the sign a mile away. 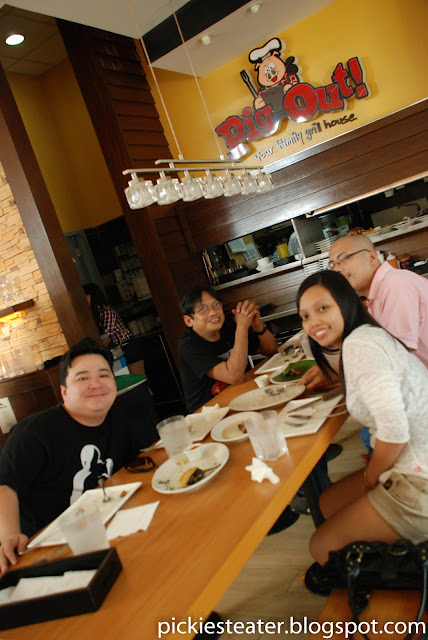 The family that Pigs Out Together, stays together


We arrived at around 1:30pm, expecting that the lunch rush had passed, but it was packed as if it was 12 noon. After a short wait, however, they managed to secure us a table so we could settle in. The interiors of Pig Out reminded me of a modern Day saloon. Not exactly with the Cowboy theme, but it had a rugged, comfortable feeling to it, without losing its touch of class. The only thing I didn't like about it, was that - I really abhor eating on benches or any chairs that don't have backrests, because after awhile, it ends up hurting my back. Nevertheless, I sucked it up and soldiered on. One glance at the menu and I was certain the stiff back would be worth it.
STRIKE ONE 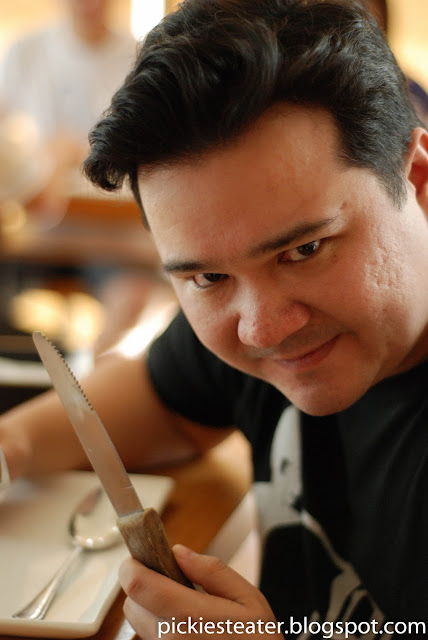 When I'm hungry, I make Wolverine look like RuPaul

Even before the Waiter handed me the menu, I said to him "Chicharon Fried Rice". Without hesitation he said to me, "I'm sorry sir, but we're out of stock." That is one of my pet peeves in a restaurant. Sure, the demand is high, but it's their responsibility to make sure that they're in stock of anything they put on the menu. Can you imagine how pissed off I was, having traveled that far, all to be told that their trademark dish is "out of stock"? So that was their strike one. We reluctantly ordered the "Chinese Style Fried Rice" instead, hoping it would be a good substitute.

After we ordered, we all got to talking just like we usually do when the five of us get together. Since we were sitting by the table closest to the kitchen, I couldn't help but notice the "pass", or the window where the kitchen places the food when it's ready for service. It was odd that by the 20 minute mark, we still hadn't been served. I told Rina that I'll keep quiet until the 30 minute mark, because I didn't want to cause a scene or anything like that. But my father in law was getting agitated already, so by the 25 minute mark, I felt I needed to speak up.

It was a holiday, so it was understandable that things would be hectic, but looking at the pass made me realize something - everything we ordered had been sitting there for quite some time, yet it wasn't being served. My Father in Law finally spoke up to the waiter, saying something along the lines that we've been waiting for a bit too long..

Finally, a waiter went up to me to ask, "Sir..umm.. did you order any rice?" So it turns out, there was no communication between Kitchen and service. Kitchen had churned out the dishes in record time, but service didn't bring it out because they were waiting for the rice. But apparently, service themselves didn't jot down my order of " Chinese Fried Rice", despite the fact that it was my waiter that suggested it, since they were out of stock of the Chicharon Fried Rice. So not only did I NOT get the Chicharon Rice I had been hoping for, I didn't get the Chinese Fried Rice substitute either. I said to hell with any form of fried rice, and give us plain rice instead, but give it RIGHT NOW. My father in law is a nice man, but don't get him hungry. Things won't be pleasant.

What annoyed me so much was that Service waited so long to ask Kitchen for our rice. As servers, they should want their customers to get the best experience of what Pig Out has to offer, by enjoying their dishes at the temperatures that it was meant to be eaten Meaning, If they saw the food sitting out for so long, they should have taken it upon themselves to ask Kitchen what was going on.


The manager was quick to come to our table to apologize, but offered no reason or excuse whatsoever - which I think was the best thing to do. When things like that happen in a restaurant, there's not much you can say to make the situation better (save of course, a free meal hehe) so he just offered a sincere apology and assured us that our rice would be on its way as soon as possible.

Lo' and behold, within seconds, the plain rice was there. 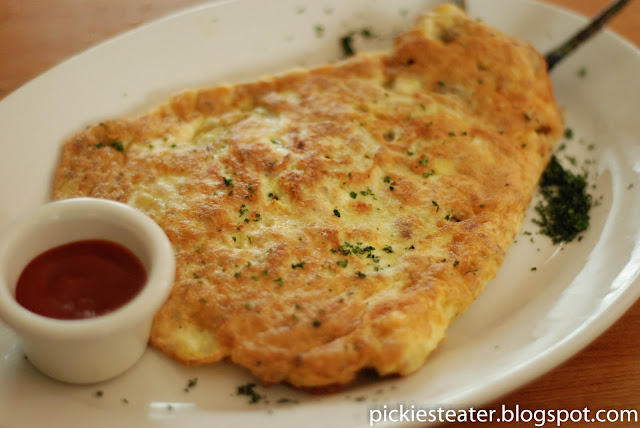 Whoever designed The Pig Out menu, is a person after my own heart. In the veggies section, you'll only find TWO entrees: Eggplant Omelette and Sauteed Chayote. Chaikka wanted a veggie dish, so she settled on the Eggplant. It was actually a decent dish, with the eggplant being cooked properly enough so that it doesn't tickle your throat. It wasn't anything that couldn't be made at home though. Also, the addition of a side of ketchup as its sauce or condiment only re-affirmed that the dish lacked imagination. 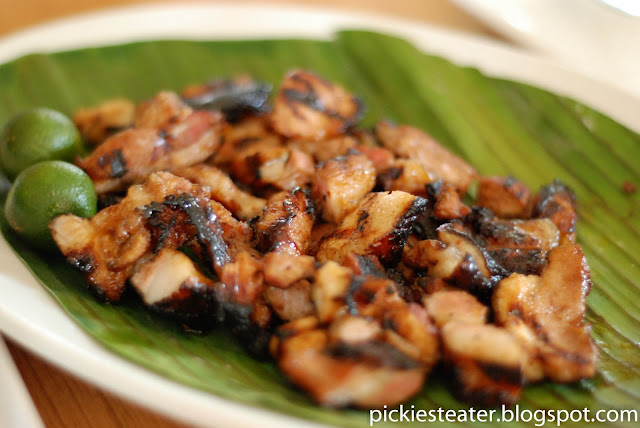 This is what it's all about. You can't go to a place called "Pig Out" and NOT order their Pork Belly Inihaw (P365), Right? Pig Out knows what to do with a piece of meat, and their Inihaw is proof. Thinly sliced strips of pork belly, beautifully marinaded in a flavorful sauce, and masterfully grilled to perfection. I loved how it had a subtle sweetness to it that didn't come off too strong to the point where you get "umay".

My only qualm is that, it's a pretty expensive order of liempo - perhaps the most expensive liempo dish i've ever ordered in my entire life (and believe you me, I've ordered ALOT of liempo in my time). 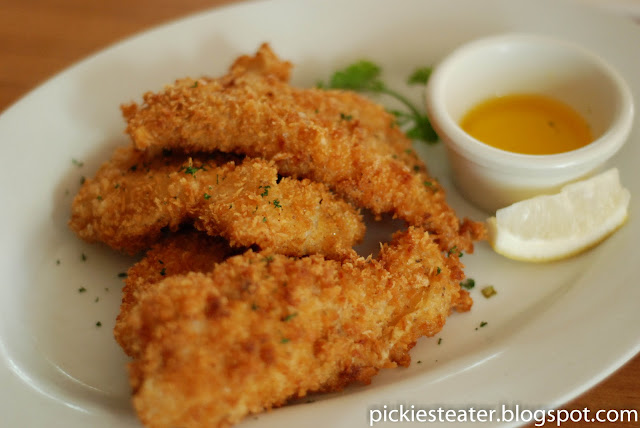 Just so we don't overload on the meat, I decided to order the Dory Fish Fillet (P265) - and everyone was so glad that I did. Surprisingly, I found an amazing fish dish in a restaurant that supposedly specializes in meat! The Dory meat just melted in your mouth with every bite. It was fried just right, so that it perfectly embodied the saying "Crispy on the outside, Soft and juicy on the inside". My only qualm was, they put so little lemon butter sauce on the side, which was a crying shame because it went perfectly with the fish. 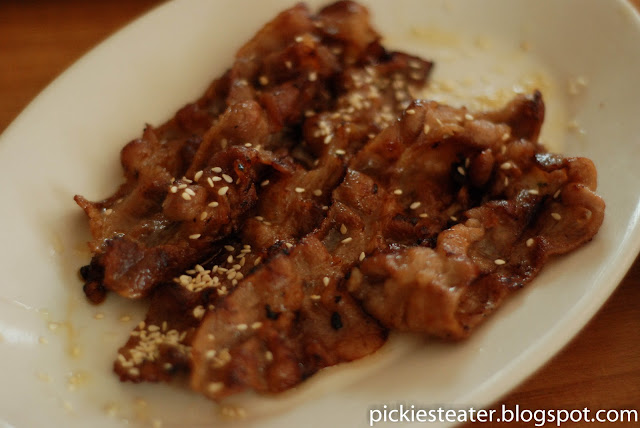 I didn't know they had tapa in Korea


There was something about the Korean Style Tapa (P225) that seemed to call out my name. Reading the description, I knew it was a sweet bacon style dish, which in other words, was genetically engineered just for me. Apart from the sprinkling of sesame seeds, I'm not so sure what's so Korean about it, though. However, If you're looking for a savory meat dish bursting with flavor, you should give this a try. Perhaps my only bone to pick was, again, it's a bit too pricey when compared to the serving. 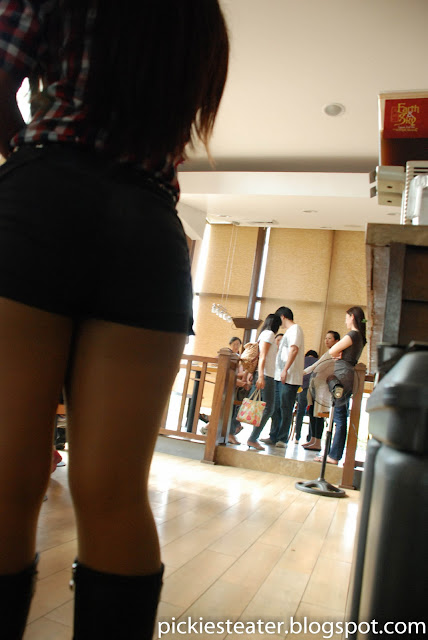 Nope, that's not on the menu.

One thing I have to say, (and please don't judge me), is that the waitresses of Pig Out have posteriors that would make Sir Mix-a-Lot proud. Seriously. And I mean that in a good way. The female waiting staff are required to wear some really short shorts that display their ample bottoms, and they could give Kim Kardashian and Jennifer Lopez a run for their money. Rina was taking a low angle shot of the interiors, and one of the waitresses walked into her shot (see above, just in case ya'll thought I took a pic of the waitresses' ass, deliberately). Even she couldn't help but look at the picture she took and give a compliment of her own. Of course I pretended not to notice ("Really? Where?") hehe.


Just when I thought Pig Out had redeemed themselves from their lackluster service with their delicious food, they go and bungle it up again. It took them around another 15 minutes to bring the bill.
Three Strikes, and Pig Out Should technically be "out", but the menu is a carnivore's (such as myself) dream, so I'm willing to give them another chance. Hopefully when I return, they would have corrected the flaws in their system.It is quite obviously that the talent of the kitchen staff, is far superior to that of the service staff. Once everyone gets on the same page, Pig Out would be even more formidable, although I do believe that it is a bit too pricey for what you get in return. 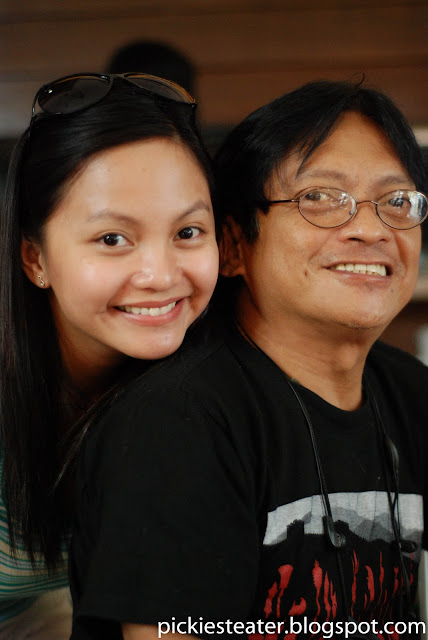 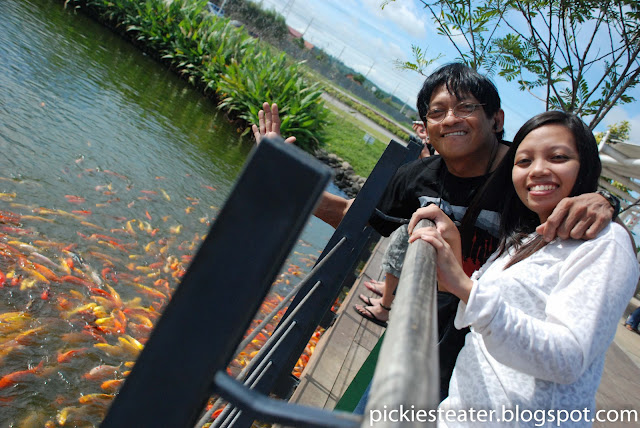 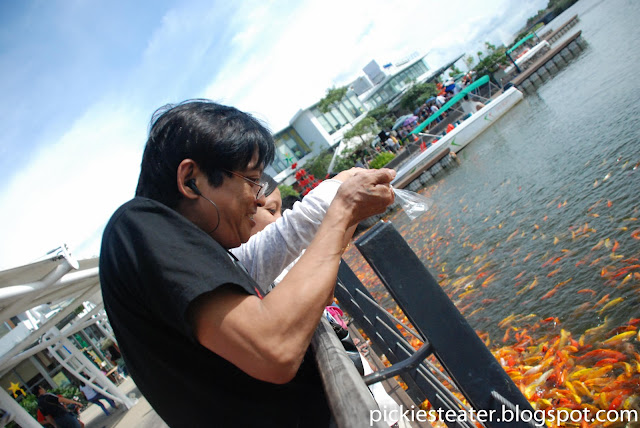 Dad having fun feeding the fishies!

Posted by The Pickiest Eater at 12:42 PM