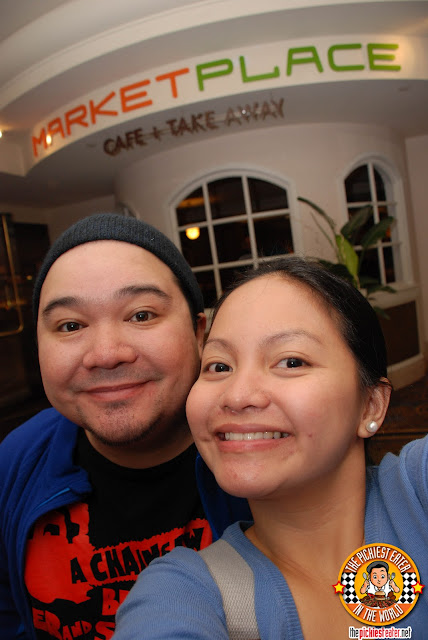 If you thought having the Blogger AmbassadOREO title was all fun and games you'd be.. well.. Right. From the start of the trip, Oreo made it clear that apart from documenting the trip of the AmbassOREOS, Jennifer and Jasmin, they wanted us to make sure that Rina and I had fun during the company's scheduled activites. This was clearly a huge event, and Oreo Philippines made sure that we'd be comfortable throughout our trip. Since the action would be happening in the "Hilton New York", along 6th Street or Avenue Of The Americas, it made complete sense for them to book us there.

As I mentioned earlier, The Hilton New York is more of a business hotel, so don't expect a poolside deck you can lounge in. Besides, if sunbathing on your vacation is more your thing, then you flew to the wrong state. This is a hotel with a location in the Center of the city, and a short distance from such tourist attractions such as the Rockefeller Center, Times Square, and Central Park.

Yet another fantastic perk included in our stay, was the free breakfast buffet every morning at Hilton New York's Marketplace Cafe.


When I was in Manila, Rina and I were discussing our breakfast plans in New York (yes, we talk about that sort of thing). My logic was that I didn't believe breakfast was necessary, because we planned on going food tripping around New York.

My wife is a strong proponent of the breakfast movement, so she vehemently argued that we would need energy to start our day right. I warned her that there's a chance that there wouldn't be any rice, so she might not enjoy it as much anyway (Rina NEEDS rice in every meal.. ESPECIALLY Breakfast). She then masterfully countered with.. "What if they have Bacon?". 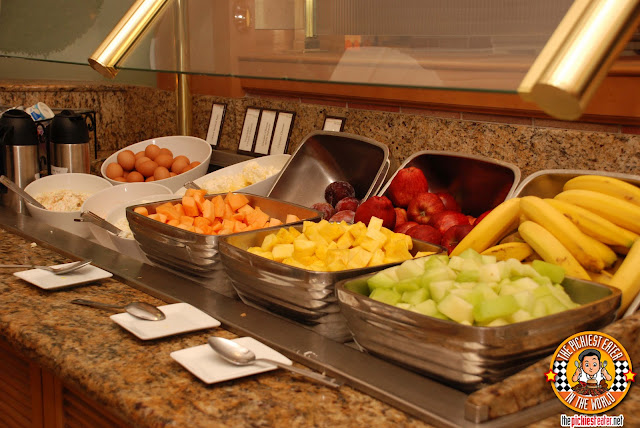 For you Health Buffs, you can start your day with a nice selection of fruits, such as Bananas, Apples, and Honeydew Melons. 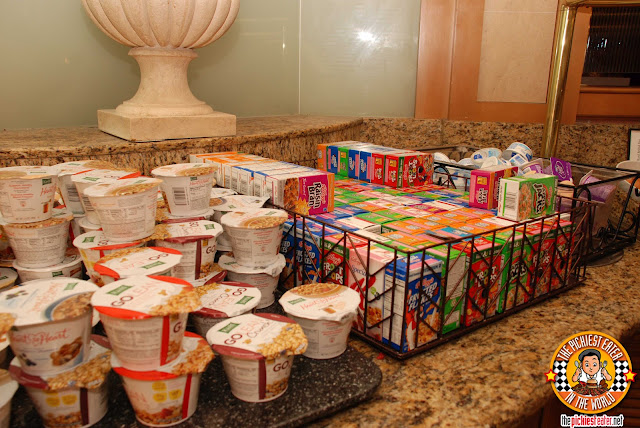 If you're looking for some grains, the Marketplace also has a grain selection,
includes healthier wheat alternatives, as well as the more classic
Sugary cereals that the children love.
(I realized I hadn't seen Apple Jacks in a long time!) 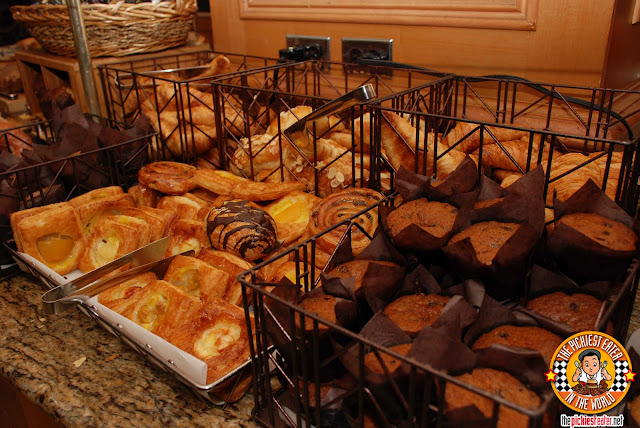 Oh and their choices of Donuts would give J.Co. a run for their money!
(Don't worry Krispy Kreme, you're still on the top of my List) 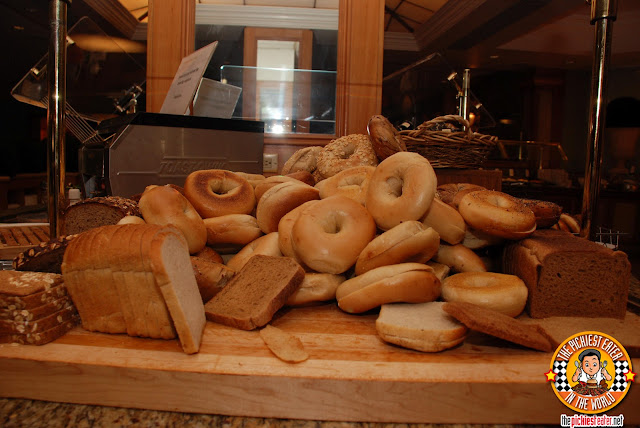 The bread bar featured a wide array to choose from..
Including Bagels (A New York Staple), whole wheat, etc. 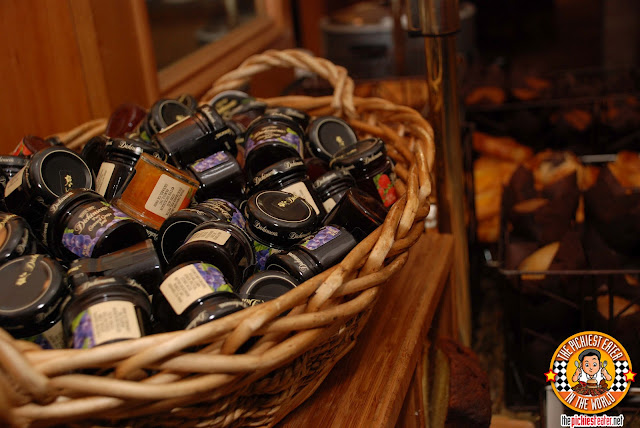 You then had three types of spreads to compliment your bread..
Grape Jam, Strawberry Jam, and Orange Marmalade 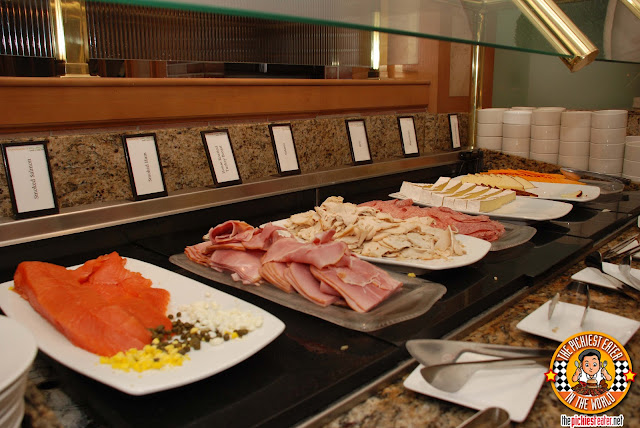 Moving on to the more savory side, you had a nice selection
of cold cuts and cheeses (The smoked Ham rocked!) 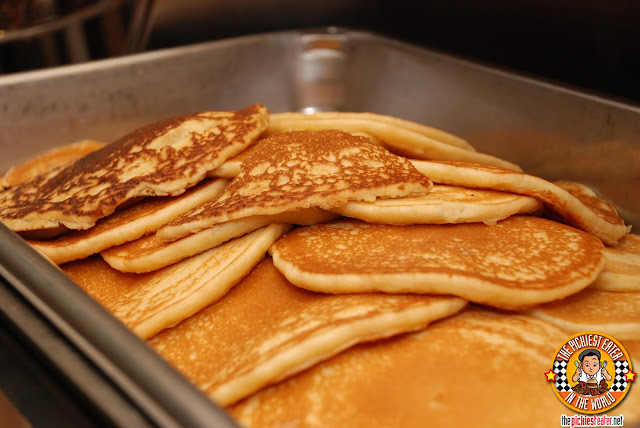 Because I was on an IHOP hangover from the night before, I could not resist the call of Marketplace's pancakes. It wasn't to the level of IHOP, but it was soft and fluffy as well.

If you told me two days before that I would find a Pancit dish in a New York hotel Breakfast buffet, I'd tell you that you were crazy. But much to my surprise, there it was. Honestly though, it wasn't anything great. It was a little bit bland, and it lacked overall seasoning. I've had much better here in the Philippines. 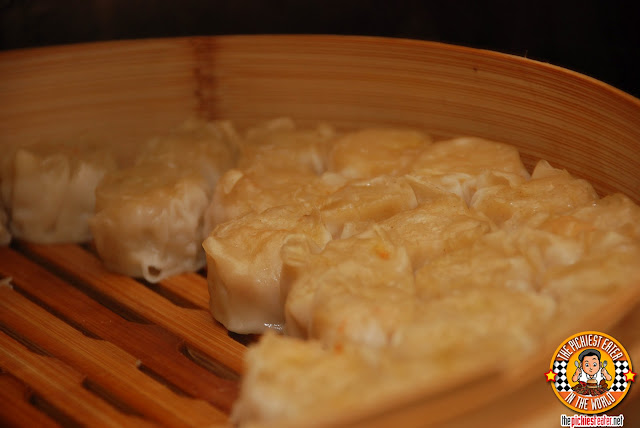 The disappointment in the Chinese food, also extended to their version of Siomai. Again, it was bland and lacked a semblance of flavor. I could safely say that the P25 Master Siomai I buy at Makati Cinema Square (Which I LOVE by the way), was much better than this. 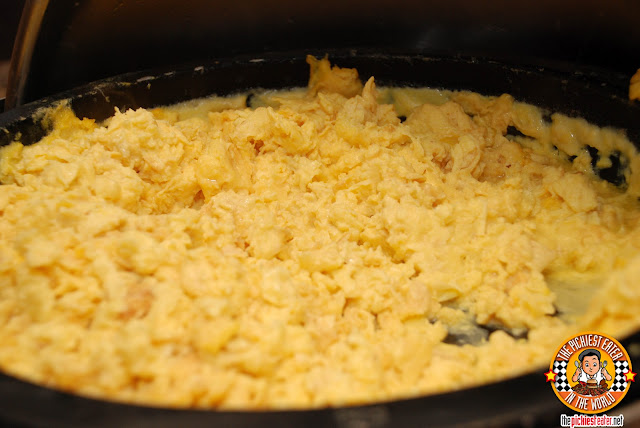 I still remember the best scrambled eggs I've ever had in my entire life. It was at the Breakfast Buffet at the Marco Polo Hong Kong sometime in the '90s. I was with my cousin Raffy standing in line for the scrambled eggs, and I watched him put a big glop of runny eggs on to his plate. He then proceeded to the congee bar, where he found a little bit of chopped spring onion, and fried wanton wrapper. He then got a teaspoon of Lea and Perrins, and laid a few droplets on top of the egg. He then mixed it all together, and BAM.. He couldn't believe he created something so delicious out of the ingredients in front of him.

I followed what he did, but after all was said and done, I mixed it into my Yang Chow Fried Rice.. Which took things into another level completely.

Raffy doesn't cook, but he always joked that if he ever put up a restaurant, it would be a French Chinese Fusion Bistro that he'd call it, "Le Bruce Le".

They got the texture of the eggs I liked, but it needed just a hint more of salt.

I'm going to be frank with you. The real reason for this post is to share with you the three simple, yet amazing dishes that I had.. and kept coming back for at New York Hilton's Marketplace Cafe. 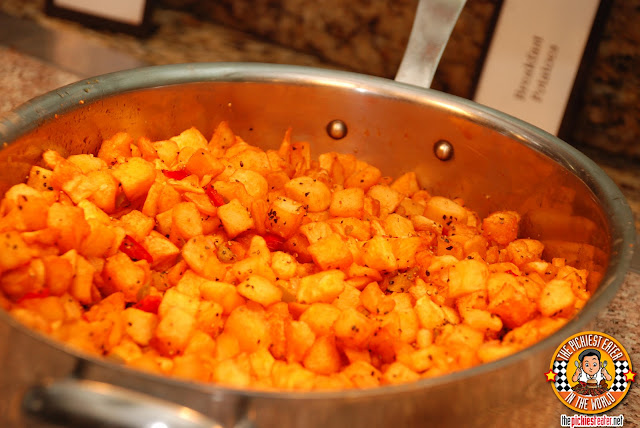 The fried breakfast potatoes were immaculate. Small, hand cut potato wedges, deep fried, with a bit of chili mixed in, giving it a nice kick of heat. I kept coming back for this over and over again, I was kinda worried I might be the cause of another potato famine. 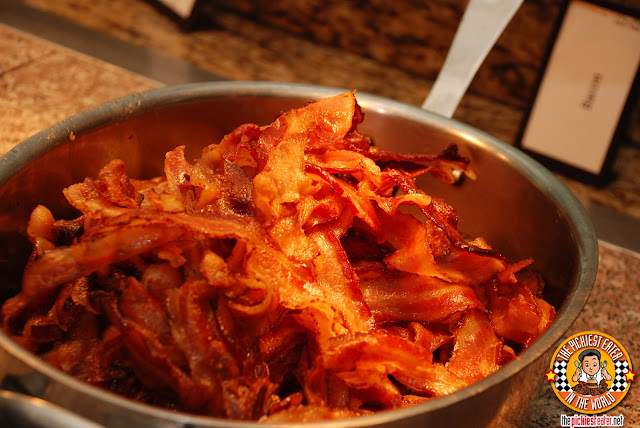 The whole "Bacon Shortage" news came out, a few days after my trip to the United States.

Coincidence? You be the judge.

All I know is, I ate platters upon platters of bacon, every morning during my stay at New York. It was fantastic. It had a beautiful smokiness and the edges, seemed to have a delicious caramelization to it, that gave it a hint of sweetness. 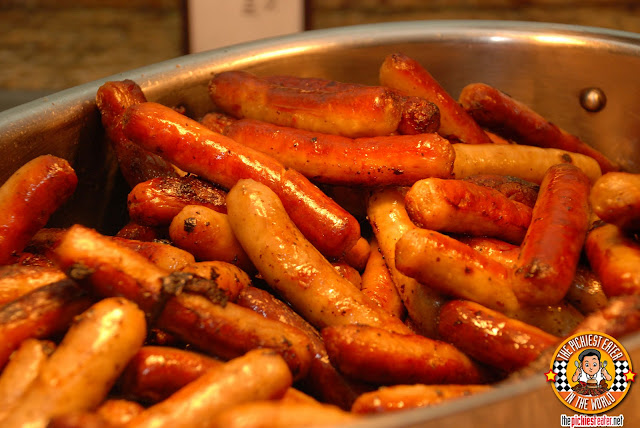 But as much as I loved the Bacon, It was the Breakfast Sausages that blew my mind to smithereens. These bad boys were so juicy, they virtually would burst in your mouth upon every bite. It had an incredible, lightly peppery, meaty flavor that just kept me craving for more and more. I loved the ones that were a tad burnt, which gave the exterior a little bit of a crispy crust.

To this very day, I still have dreams about this.

Rina really enjoyed the breakfast, but she couldn't help but comment on one thing that I totally agreed with. This would have gone perfect with Garlic Fried Rice. Don't get me wrong.. The Hilton Provided white rice for their Asian market, but, as I say quite often.. and I'm sure many of you will agree with me.. Iba pa rin ang breakfast pag may sinangag.

After Rina got her food, she took advantage of the rare moment in which the buffet line miraculously cleared up. As she was taking pictures, the cook behind the omelet station, asked her, "Do you need Modelo?". Rina laughed and said, "No Thank you!". The cooked laughed too and replied, "Salamat!".

Much to Rina's delight, the cook, a nice man by the name of "Amante" was Filipino!

So Rina led him back to our table to introduce him to me, and he told me a little about himself and his family back in the Philippines. After a short conversation, he asked me, "Ano pa po ma-ililingkod ko sa inyo?" (What else can I do for you?)

Without missing a beat, I said, "Naghahanap si Misis ng Sinangag!" (My wife has been looking for garlic rice!)

His eyes beamed up as he proudly said, "Sinangag? Walang Problema yan!" (No problem!) 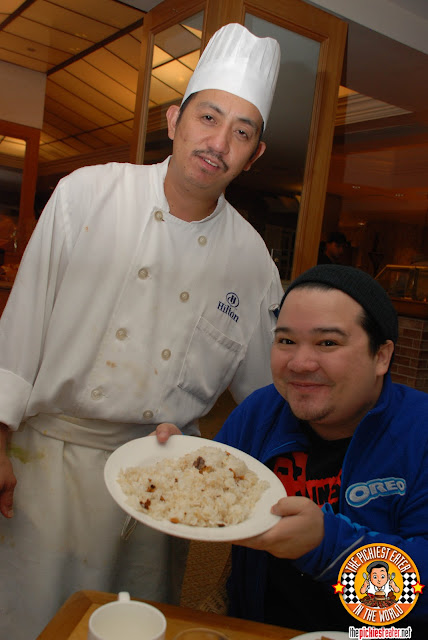 Minutes later, Rina and I were the only guests that morning at the New York Hilton that were enjoying their breakfast with a plate- nay- a MOUNTAIN of garlic fried rice!!

So from that day on, whenever Amante would see us in Marketplace Cafe, He'd whip up a batch of his special sinangag, just for us! It's amazing how our already awesome New York Experience was made even more memorable by a fellow Filipino! 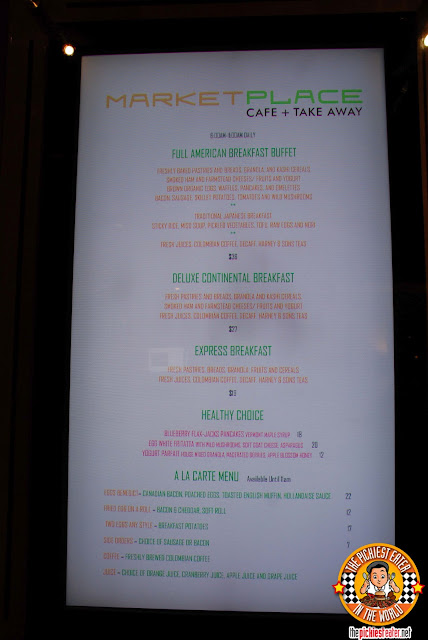