THE GREAT OREO ADVENTURE: THE AMBASSADOREOS ARE OFF TO NEW YORK! 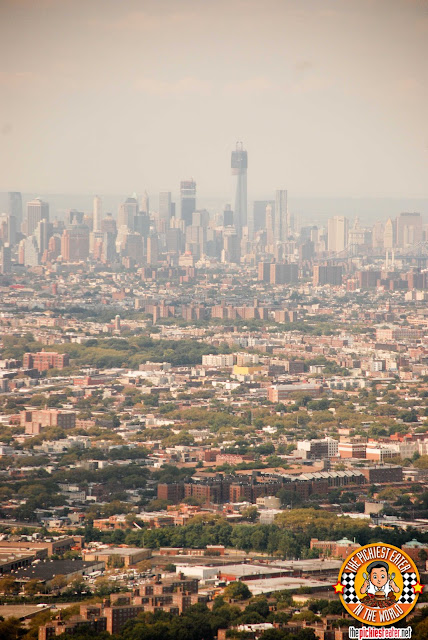 Imagine waking up from a deep in-flight slumber,
looking out the window, and seeing this glorious sight.

If you visit my blog with any form of frequency, there's a chance that you might have stumbled unto a little tidbit of me winning the title of the Oreo's "Official Blogger AmbassadOREO".

So what exactly did winning that title mean?

Well for starters, it gave me and my wife the opportunity to fly on an all expenses paid to New York (with pocket money) so we could attend the highly anticipated "100 Years of Oreo" event, where Oreo lovers from around the world gathered in a fun filled celebration of everyone's favorite cookie!

So begins the travel log of what I consider, -next to my wedding and the birth of my daughter- The greatest experience of my life.. Our Great New York Adventure, courtesy of Oreo Philippines! 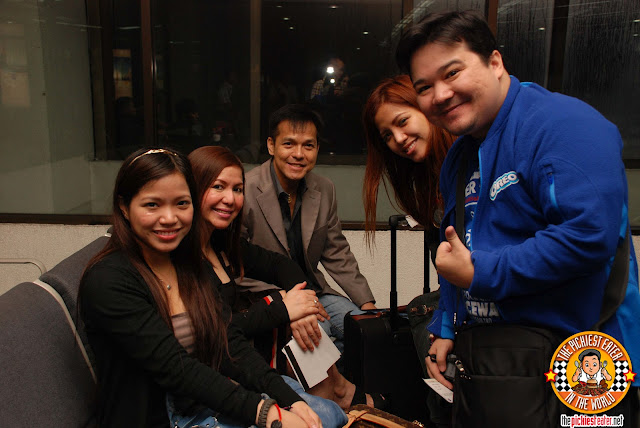 As the Blogger AbassadOREO, my role was to cover the events of The Philippine contingent, which was led by our country's Official AmbassadOREO, Jennifer Weigel Sarmiento, and her twin sister, Jasmin, who were joined by their parents on the trip. 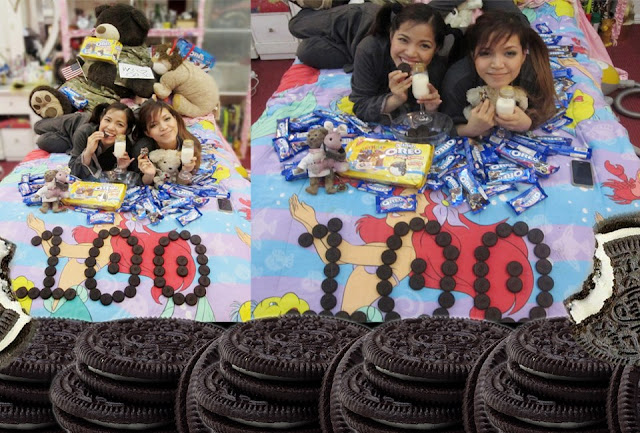 Jennifer and Jasmin's "Twin Oreos" entry bested many others, and earned them the right to represent the Philippines during the "100 Years of Oreo" Celebration. And as you'll see in my upcoming posts, they were the perfect choice! 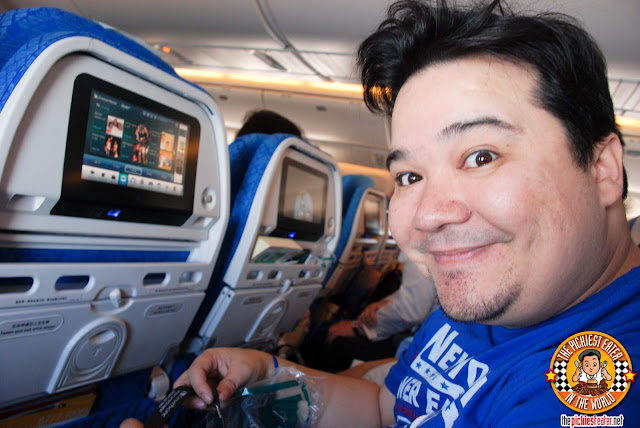 Going to New York was a pretty long flight.. In fact, the longest I've ever been on. It's a near two Hour trip to Hong Kong, followed by a butt numbing 16 hour flight to New York. We were flying economy, so legs space wasn't of great abundance (Perhaps the only time i've ever been thankful to be short).  Sixteen hours is an incredibly long time to be stuck in a chair. I think I found so many positions that would put a Yoga (or Kama Sutra) instructor to shame. 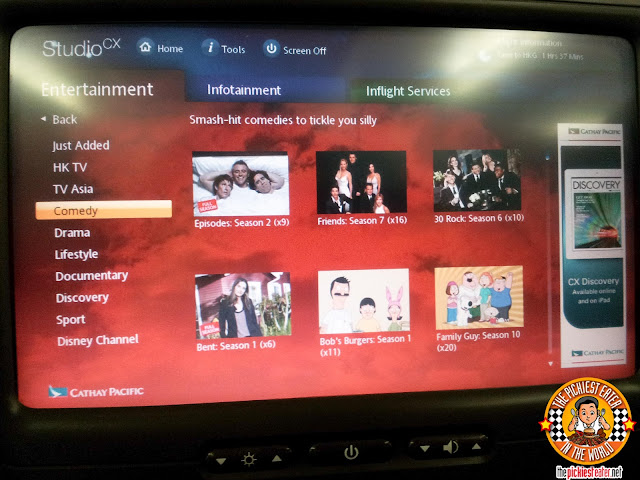 But I've got to admit, flying Cathay Pacific made it so much easier.

Cathay Pacific's In-flight entertainment system, known as "Studio CX", will be your best friend throughout your trip. Time will actually zip by when you have an impressive roster of TV series' (seasons, mind you, not just single episodes) and some of the latest movies at your disposal.

Throughout the entire trip, I watched several movies on the plane, such as Prometheus, J. Edgar, Wanderlust, Men In Black, as well as the entire first season Anthony Bourdain's "The Layover", which incidentally had a New York episode that psyched me up for what was to come. 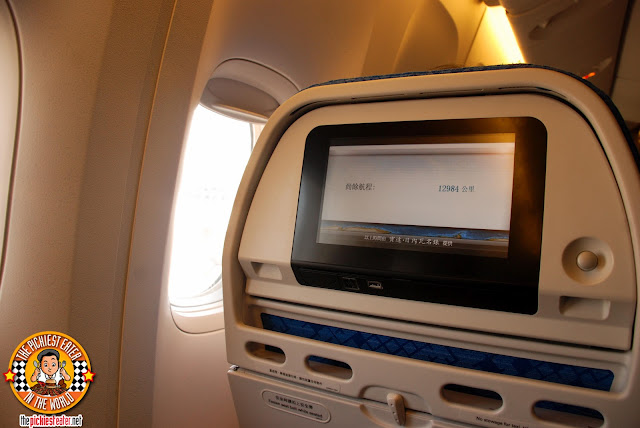 The Studio CX system also has a "Flight Map" option that gives you a better insight on where you are in the world, and how much longer it will take to get you to your destination.

The meals on the plane weren't anything great, but I did appreciate the effort Cathay Pacific made in hoping to give their passengers a gourmet meal. 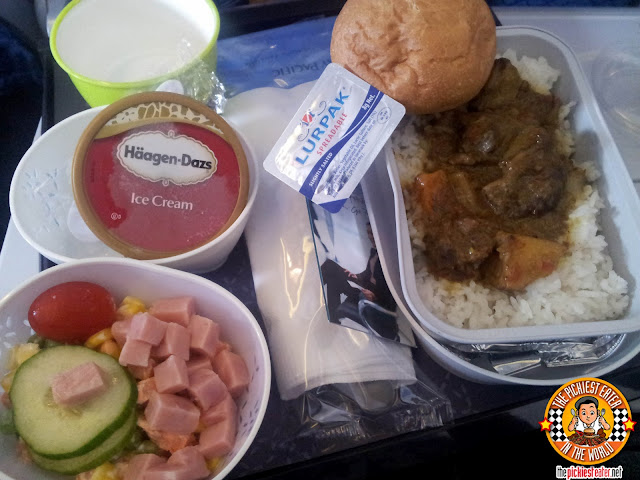 For lunch I ordered the "Hong Kong Style Dry Beef Curry on Steamed Jasmine Rice". The meat was a little bland, but the curry had a nice touch of spice to it. On the side was a creamy vegetable salad with ham (I ate all the ham), and a cup of delicious Haagen Dazs Chocolate Ice Cream.

Since Haagen Dazs closed in Manila, this was a nice trip down memory lane. 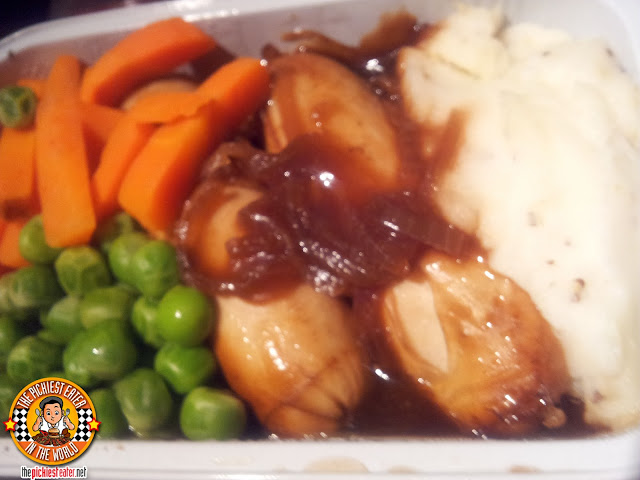 For dinner, I ordered the Pork Sausage with Onion Gravy, which was actually fairly decent, and not just for airplane food. 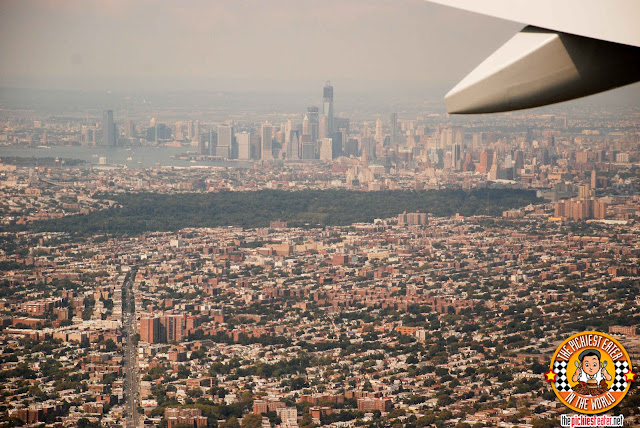 Since we were going to be at New York for a limited amount of time, I did my best to adjust my body clock. I wasn't planning on spending my few days in one of the greatest cities on Earth in bed. So there I was, snoozing in my seat, when the captain announced that we would be landing soon. Rina excitedly lifted up her window, and got her very first glimpse of the Big Apple.

And it was beautiful. 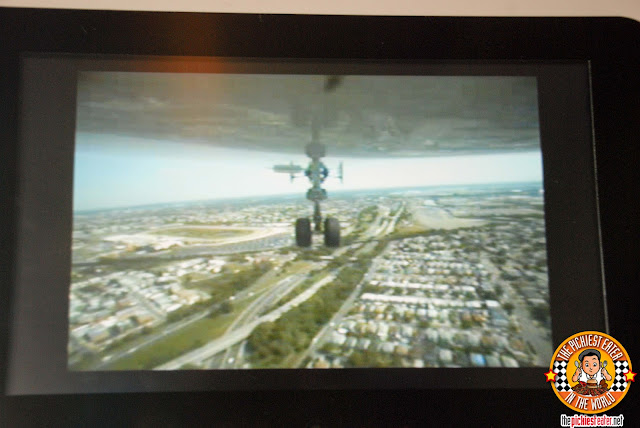 I forgot to mention, another cool option of the personal TV screens, is that they mounted a camera on the bottom of the plane, so you could actually see the view down below.. Meaning we watched the take off and landing. 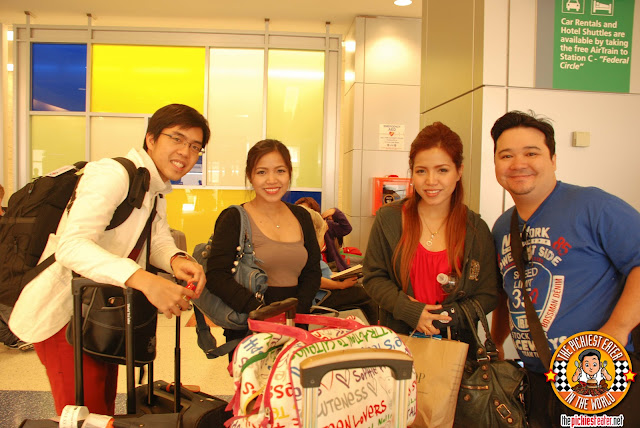 Seriously, that Alicia Keys song kept playing over and over in my head, almost like it was on loop in my medulla oblongata (that probably made no sense at all). But the important part was that we landed safe and sound.

After clearing through immigration, the Philippine contingent, which included Oreo Philippines Brand Manager Nano Betita, all met at the John F. Kennedy Airport concourse, where we went out together to wait for our ride. 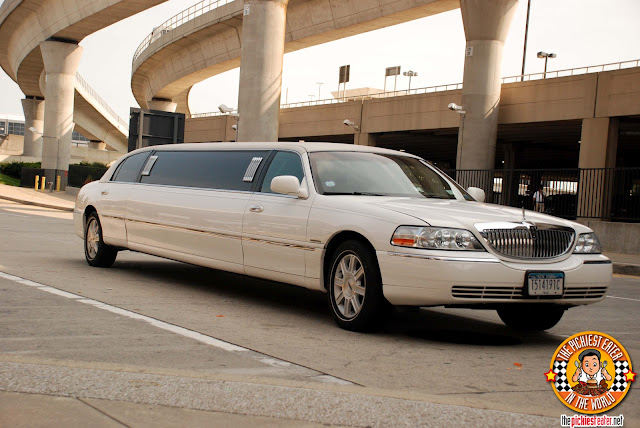 I was honestly expecting a mini shuttle bus, or a large van to pull up in front of us.. But you see, that isn't how Oreo rolls. Instead, a frickin' STRETCH LIMO pulls up, giving us the full VIP treatment! 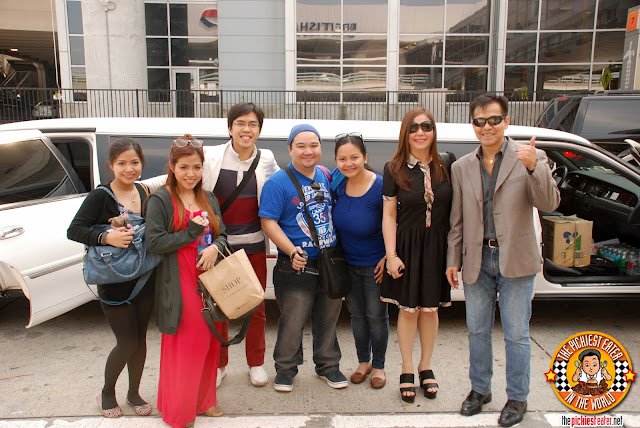 All seven members of the Philippine Contingent
getting ready to take on the Big Apple! 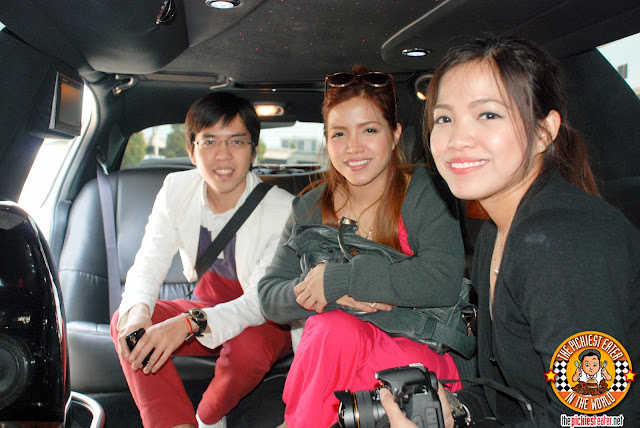 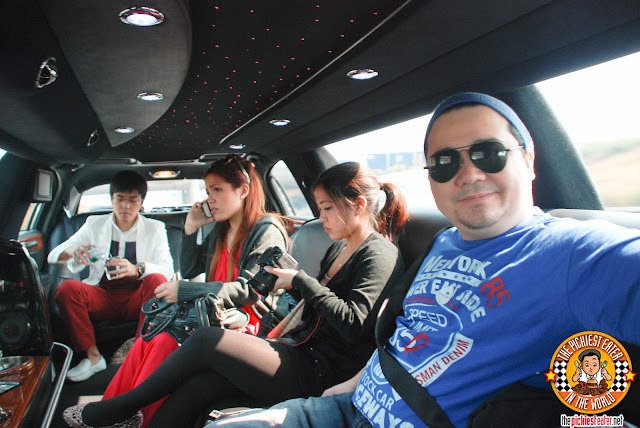 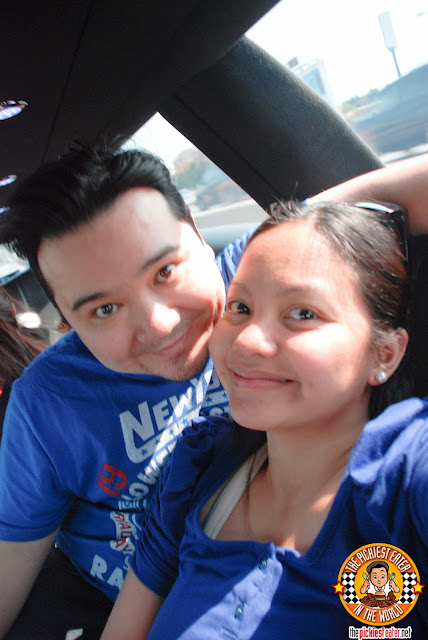 The best part about this experience? Having my wife with me. 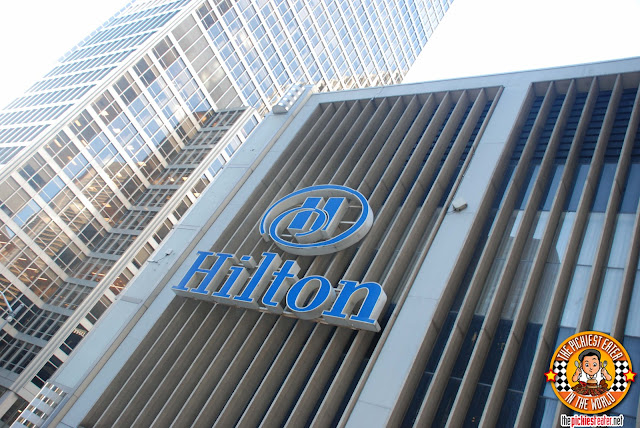 Part of our prize, was a stay at The Hilton New York, right along 6th avenue, or "Avenue of the Americas" to us tourists. The Hotel is perfect for businessmen, especially because of its amazing location. Central Park is 5 blocks down, there's a subway station around 3 blocks away, and right in front is the famous "Hilton Halal" food cart.. Which still had a considerable queue at 11 in the evening. It's a short walk to other notable New York Landmarks, such as Times Square and The Rockefeller Center. 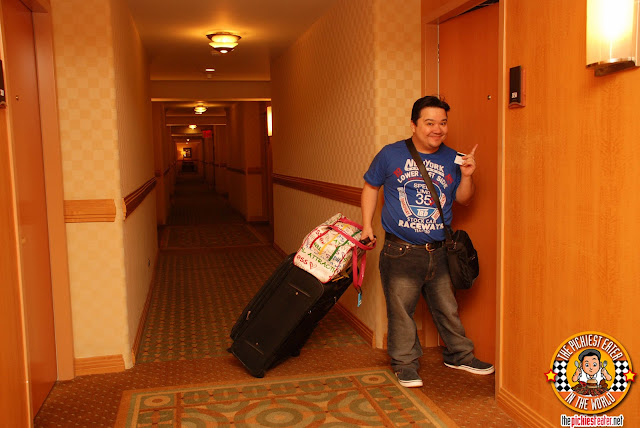 The Hilton is a great hotel that I would recommend to anyone going to New York. A bit pricey, but the convenience of the location makes it totally worth it! 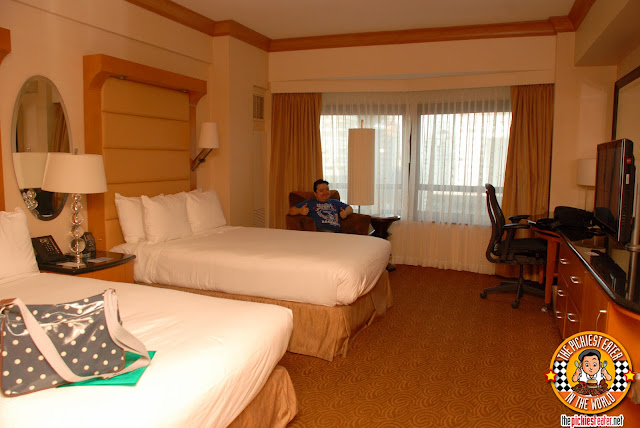 We settled into our rooms, and it was beautiful and spacious.. If it wasn't a waste precious time in a foreign country, I would have loved to have just lounged around in our hotel room, and watch TV all day. 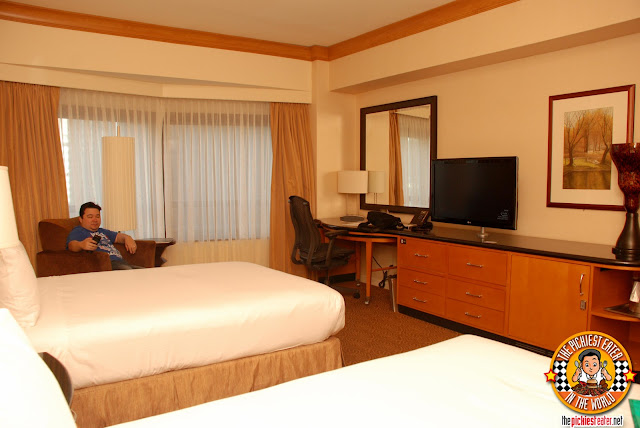 I was sorely disappointed when they told me that a room with a queen or king size bed was not available, and we would have to share a room with two double beds. I'm really not used to not having Rina by my side when I go to sleep. When we entered the room, I told Rina, "Don't worry baby, I'll still sleep beside you.". She plopped down onto one of the fluffy beds, and spread her limbs out, maximizing the whole space of the bed. Within minutes, she was out cold.

Something told me she wasn't as disappointed as I was.

So come to think about it, its a good thing there was another double bed, otherwise, I might have ended up on the floor. 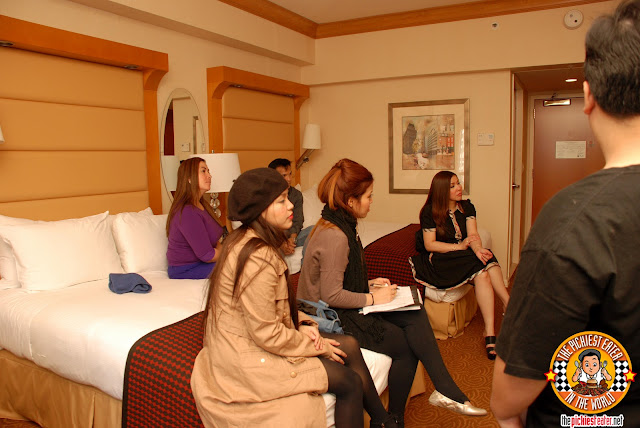 After giving us a little bit of time to get some rest and settle in, the Philippine Oreo contingent met up in Nano's room for our orientation on what to expect throughout the trip. 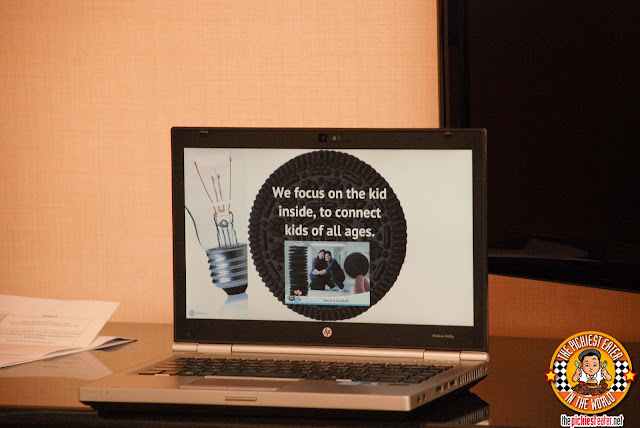 Nano guided us through the vision of Oreo.. Which is bringing out the child in you.. Something I'd like to think I know a thing or two about!


He also showed us some fantastic Oreo commercials from around the world, and this was hands down my favorite. 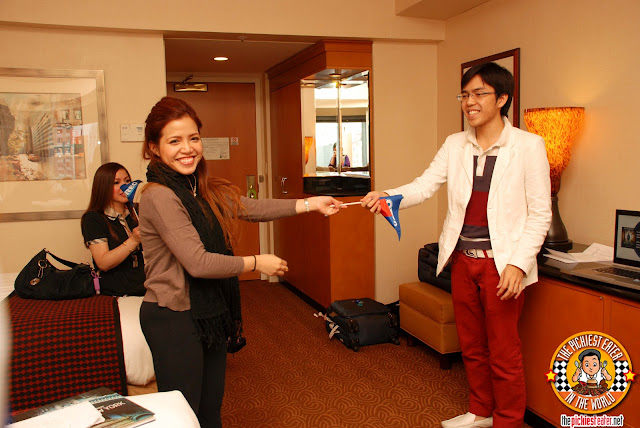 After the orientation, The AmbassadOREOS received their Oreo Flags starting with Jennifer.. 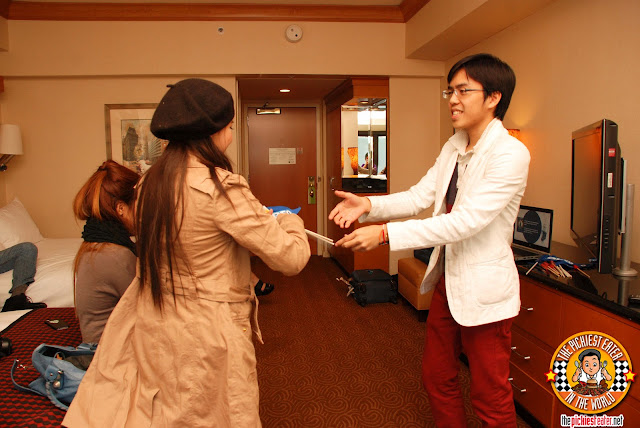 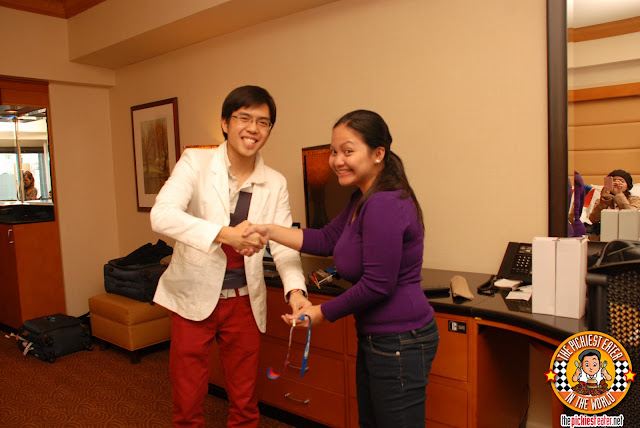 The orientation set the tone for days to come. Immersing ourselves into the whole Oreo experience was essential to us AmbassadOREOS, as were tasked to represent, not just our country, but the brand as well. Imbibing the values and vision would be one of our most vital tasks for the week.

So lemme guess... You're wondering where the food pix are right?

This is just the beginning, dear friends!

Stay tuned for my next New York Post! :)
Posted by The Pickiest Eater at 12:18 AM