CHEF TATUNG'S LATEST: ALAB IT SO MUCH! 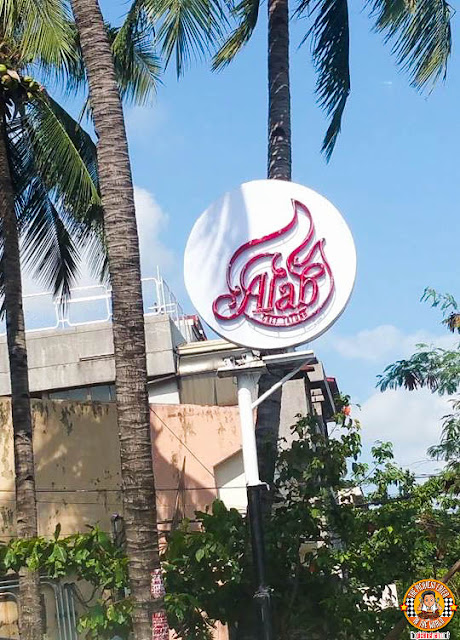 After blowing my mind to smithereens with his Filipino Dishes at his restaurant, "Chef Tatung", Celebrity Chef Myke "Tatung" Sarthou returns to the area where his legend first began.. Quezon City. And just like the first time, his name baby, "Alab", is setting Philippine cuisine on fire with its inventive takes on home grown Pinoy food! 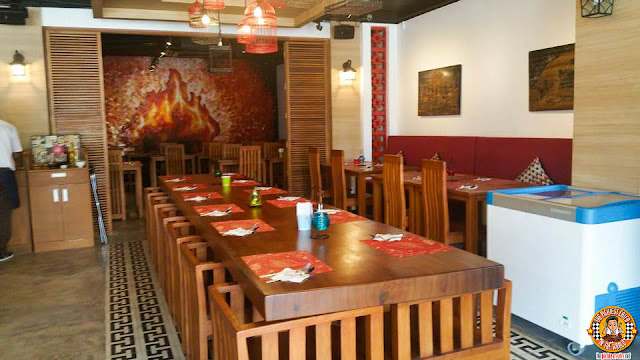 Very spacious and welcoming, Alab is located at Scout Rallos, near the restaurant haven that is the Scout/Tomas Morato/Timog area. Despite the presence of heavy competition around the area that have been considered culinary institutions, Alab has quickly emerged as the hottest dining spot in Quezon City. 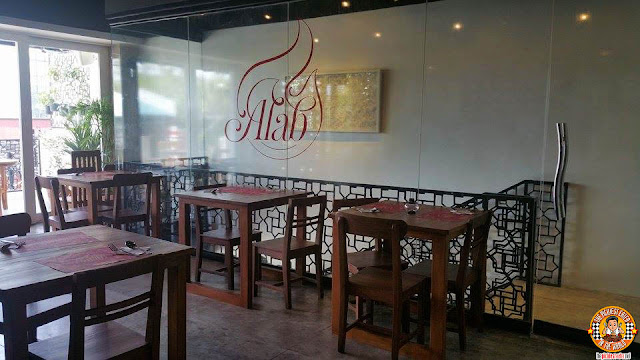 Alab's dining area is comfortably spaced out within the two floors area of restaurant. 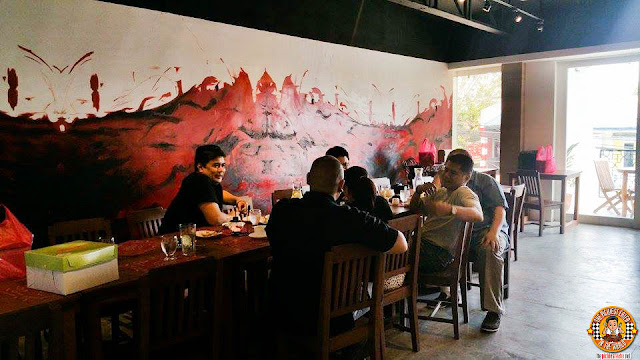 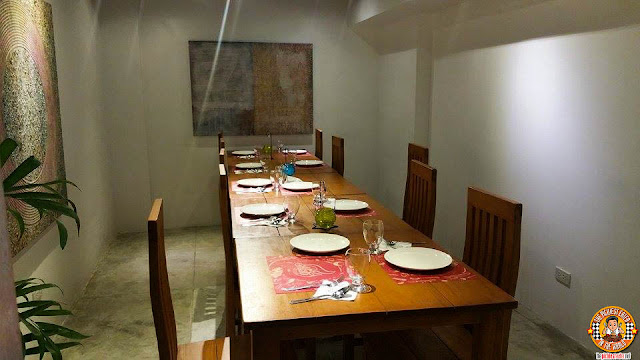 Alab also features dining areas that may be blocked off for private use, for both large and small parties. 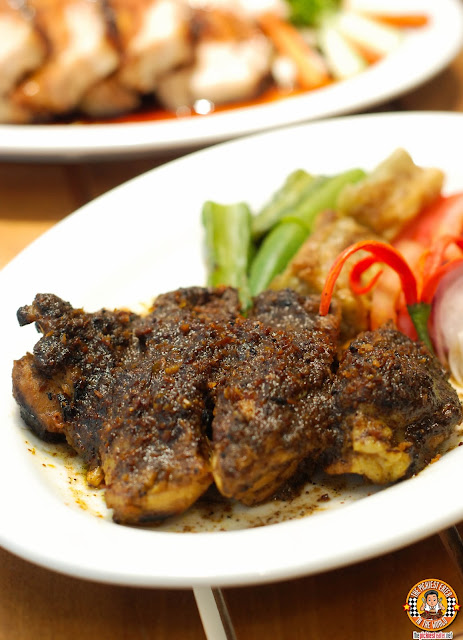 The meal began with the Ensaladang Filipino (P120), which is a selection of blanched and grilled vegetables in a Ginamos dip. Not my thing, but everyone gobbled it up like crazy, so it must have been pretty good. 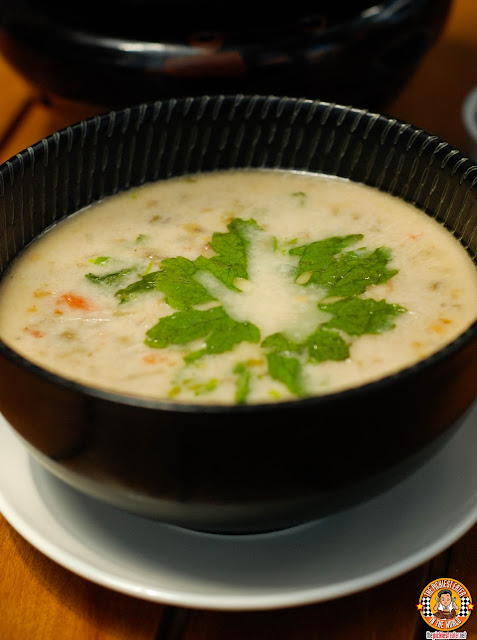 Back when I used to work in Makati, one of my best friends, Ted, would always look forward to Friday, because for some reason, that was the only day that the "Jolly Jeep" in front of our office would serve Monggo. I'm pretty sure when he tries Chef Tatung's Guinataang Monggo (P80), he won't be able to wait seven days for his next bowl. The Monggo Beans are stewed in a light Coconut Milk Broth, mixed with Smoked Fish Flakes and Ampalaya Leaves. 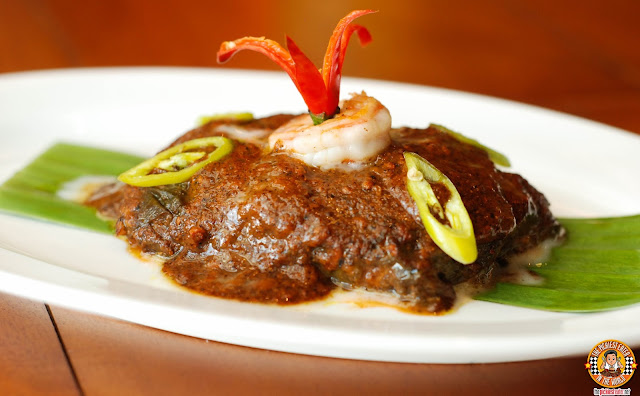 I think this was the first time I ever came across the native dish called, Tinumok (P170).  and I was rather impressed with the technique behind the dish. Coconut meat is shredded into noodles, then mixed with minced Shrimp, then wrapped in Taro Leaves and stewed in a rich Coconut Cream. Bagoong Alamang rounds out the dish for an added flair of flavor. 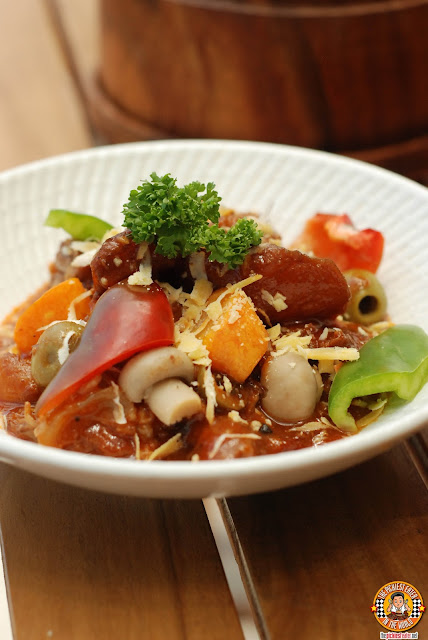 I pride myself in being the Pickiest Eater in the World, so there was no way I was gonna touch a dish made with goat meat. I chose to ignore the "oohing" and "aahing" of my friends and pass on the Kalderetang Kanding (P445). Chunks of  Goat meat and mixed fresh vegetables are cooked in a tomato heavy stew, then thickened with Liver Puree, and sprinkled with Quezo De Bola. 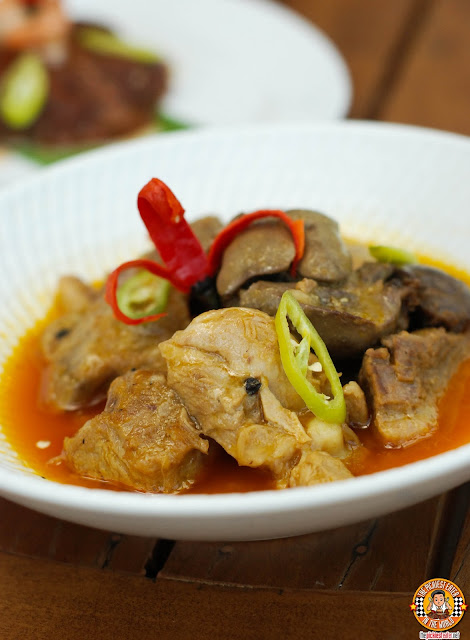 Chef Tatung gives the Pinoy Favorite, "Adobo" a bit of a spin with his Adobo sa Pula (P280). Alab's version eschews the use of soy sauce in the dish - something rather unheard of to Adobo purists, and lets the natural flavors of the chicken and pork be given vibrance by the use of vinegar and chili peppers, while annatto is used to give the sauce the reddish tinge. Delicious! 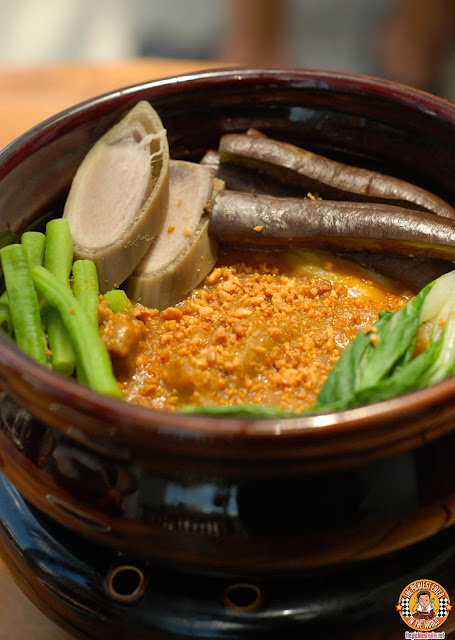 The Kare-Kare (P450) stayed true to its original incarnation, but done with the culinary finesse that Chef Tatung is known for. A medley of vegetables together with Beef Trotters, Tripe and Tail, are bathed in a luscious, Peanut Sauce, making for a stunning take on a classic! 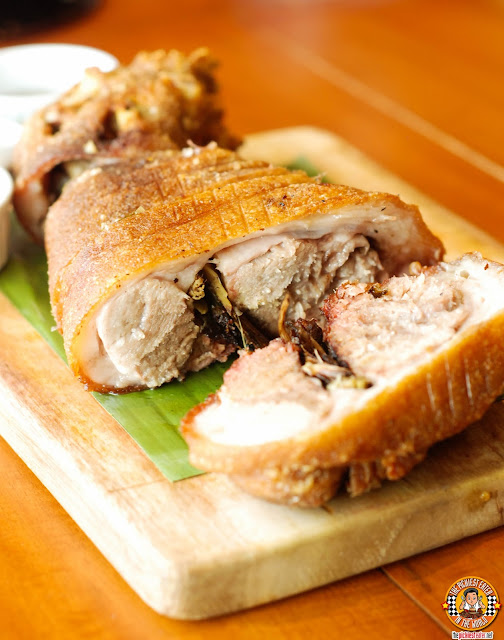 The undoubted show stopper of the day was the Pritson na Crispy Pata (P580). Chef Tatung uses his Visayan roots to bring new life to the Filipono's beloved Crispy Pata, by stuffing it with lemongrass and leeks - not unlike the Lechon Cebu Style, before roasting it to a glorious crisp! 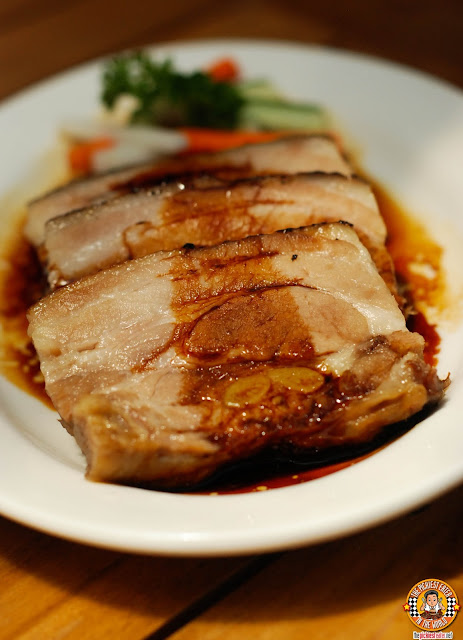 A tear nearly fell from my right eye when they served the Honey Lechon (P390), one of my favorite dishes of all time in any restaurant. The last time I had this was roughly around three years ago, and not a day goes by that I don't think about it. (I promised myself I wasn't going to cry) Succulent slices of Pork Belly is roasted on a bed of garlic and lemongrass for six hours, and drizzled in Chef Tatung's mouthwatering Honey Sauce, that seamlessly compliments meat.

This was so good, I came back for a second serving a couple of weeks later. 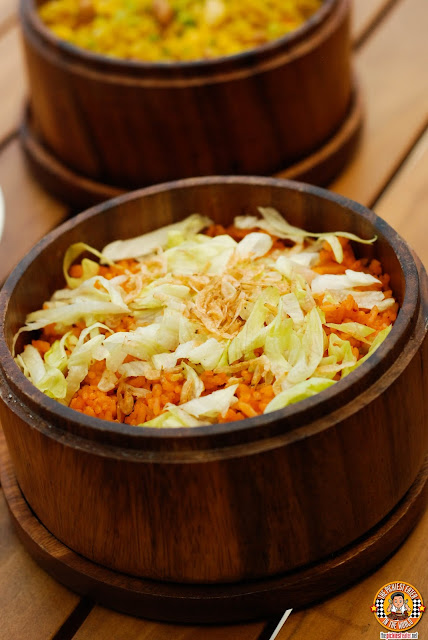 I'm a sucker for fried rice, but admittedly, I'm not too into crab. However, if you do enjoy crab, particularly Aligue, then you'll enjoy the Aligue Fried Rice (P180).  Generous helpings of Crab Fat, assorted Vegetables, Scrambled Egg and Dried Shrimps are stir fried together into a fried rice. 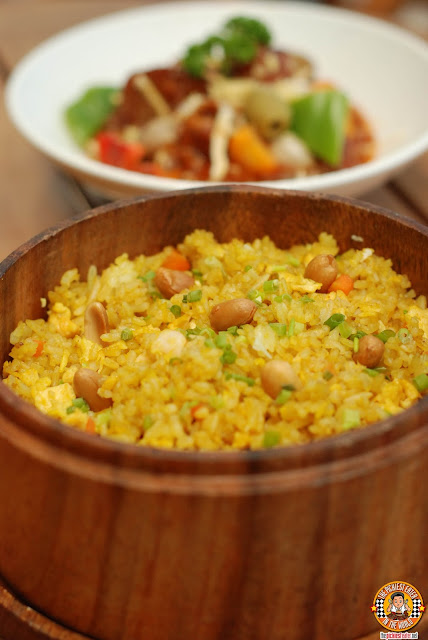 I honestly had my mind set on eating garlic or even plain rice with my meal, just to make sure I could appreciate all the flavors of the dishes to its fullest Then I remembered how awesome Tatung's Fried Rice (P180) was, and that idea went straight out the window. This yellow Fried Rice is enhanced with Yellow Ginger, bits of shrimp, mixed vegetables, scrambled eggs and finely chopped spring onions, This could be a meal in itself and is one of the best fried rice dishes out there. What makes it amazing is that, despite it not having a actual meat in it (as I said before, I pick out the shrimps, so it doesn't count), it still has a savoriness that makes it remarkably filling.

You can also choose from an array of Filipino Desserts, including the.. 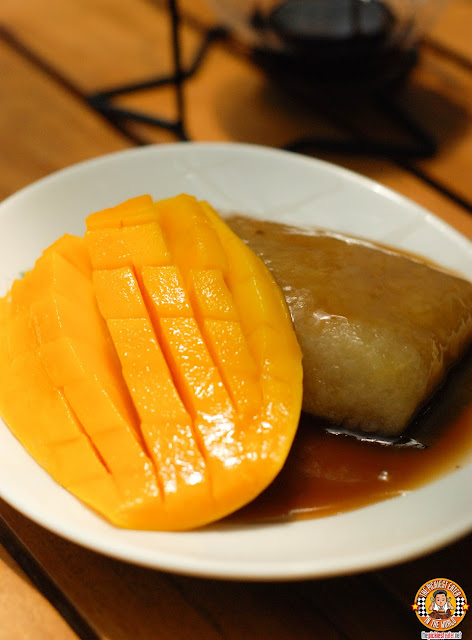 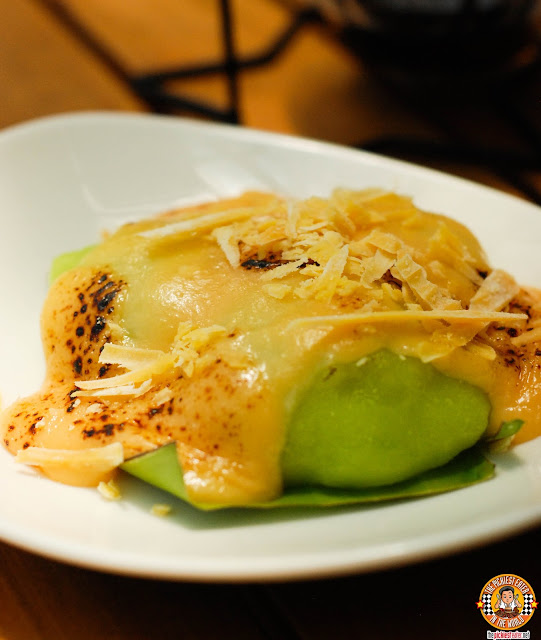 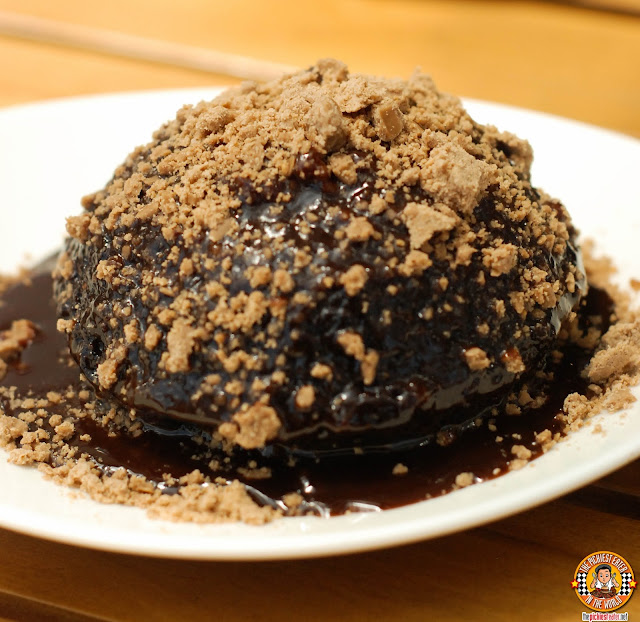 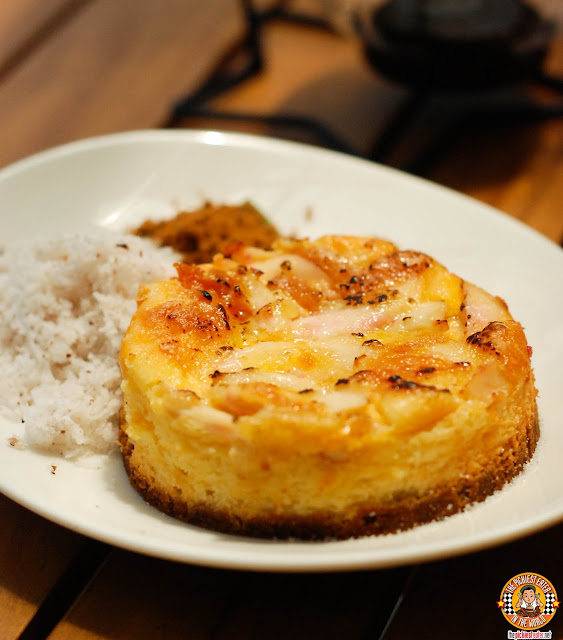 And Chef Tatung's East meets West Dessert.. The New York Cubao Bibingka Cheesecake (P140). This is a definite must try! 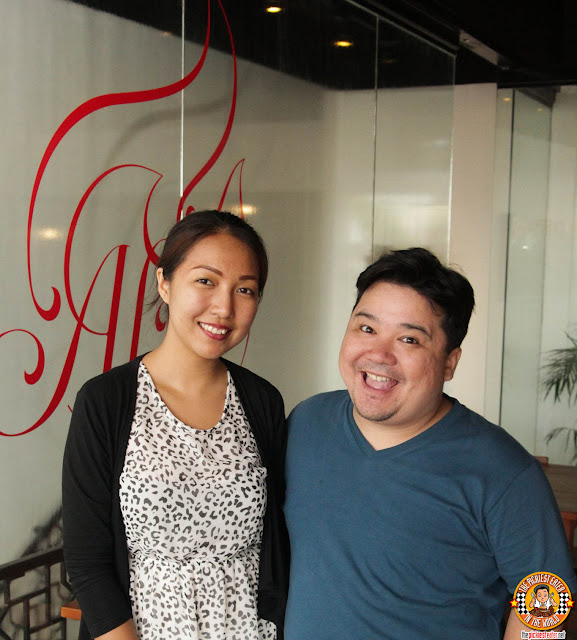 Our meal was made even more memorable by the presence of my favorite Blogger from Cebu.. The gorgeous Babe For Food! 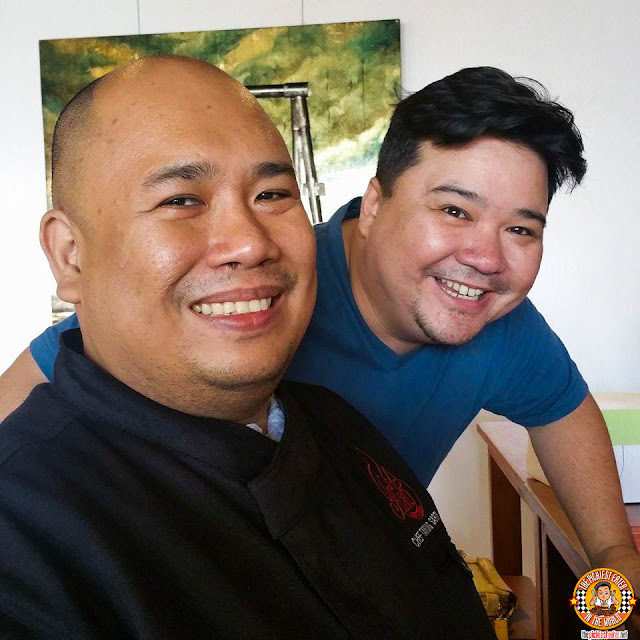 Congratulations to Chef "Magic Myke" Tatung for the successful opening of Alab! Since Rina wasn't with me the first time, I had to take her back a few weeks later, and she loved it as much as I did!

And we can't wait to go back! 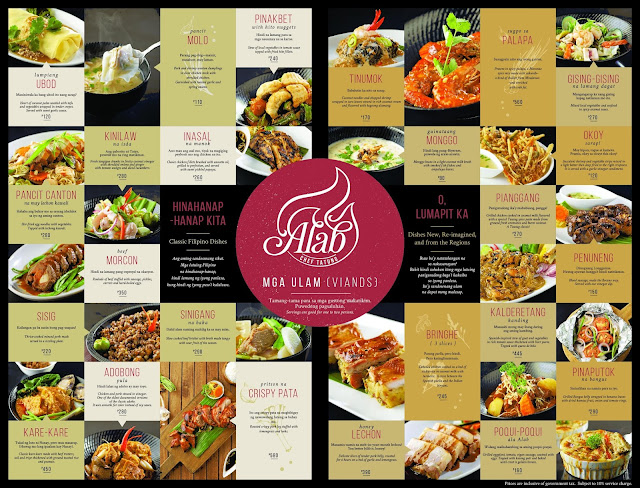 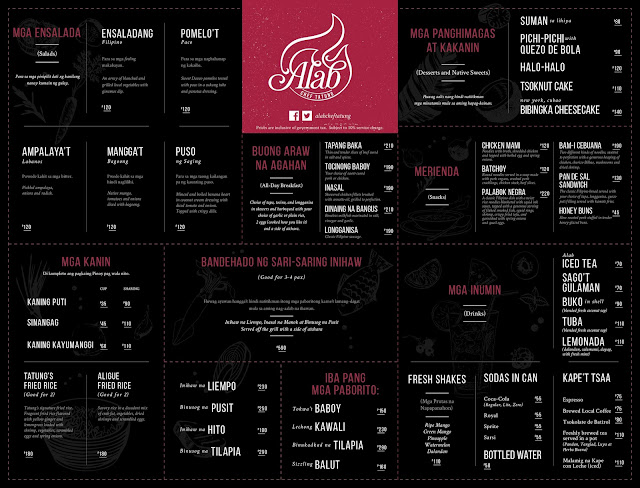 Posted by The Pickiest Eater at 6:00 AM