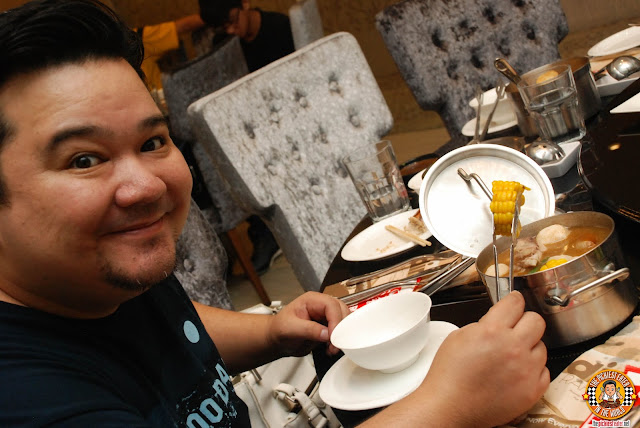 I never liked Hot Pot restaurants. That's the god's honest truth. Not so much because of the food, but because of my previous experiences. You see, when I the "Executive Assistant" of my boss who happened to be the owner of the company I worked for, he would love to hold meetings at this popular Hot Pot restaurant along Jupiter. Whenever people would tell him it would be better to eat somewhere else so they don't need to cook their own food, he would just reply, "Don't worry, Richie is there". Meaning everyone would grab slabs of meat, and it was my job was to cook it for them.

They ate, while I cooked. By the time my boss and his guests were done eating, I had to settle for the cooked ala carte items in their limited buffet. In fairness, the food was good, but I always associated Hot Pot restaurants with those infuriating experiences.

All those bad memories were erased when I visited Four Seasons Buffet and Hotpot in Cubao, giving me a new perspective to what a real hot pot experience should be. 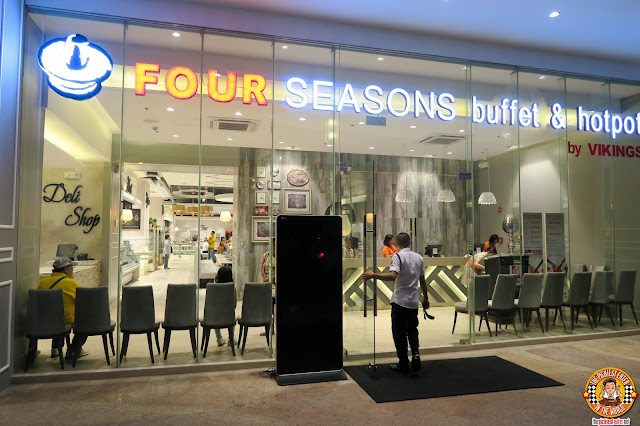 Don't get me wrong, my boss was a hard ass and all, but he did treat me fairly, and having to serve up him and his guests was all part of my paying my dues. I will always be grateful for the lessons I learned from him.. But I'm thankful I can enjoy a hotpot restaurant in peace hehe.

I am so happy that Four Seasons opened another branch more accessible to me. I've been meaning to visit the first branch that opened in Mall of Asia, but it's really a bit too far for me (and I'm lazy to drive hehe) so I never got to visit it. My friends that have been there swear to its excellence so their newest branch at Manhattan Parkview in Araneta Center, was a godsend. 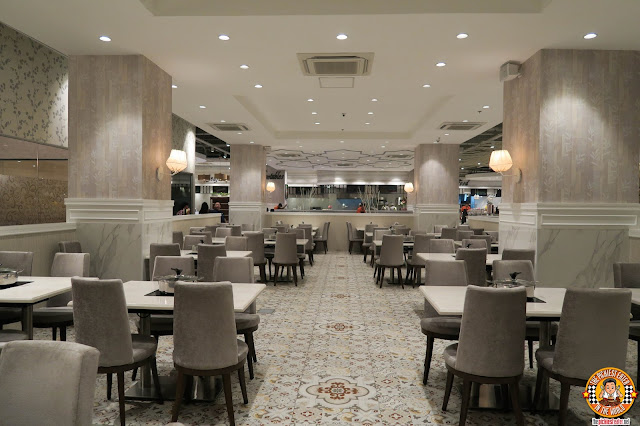 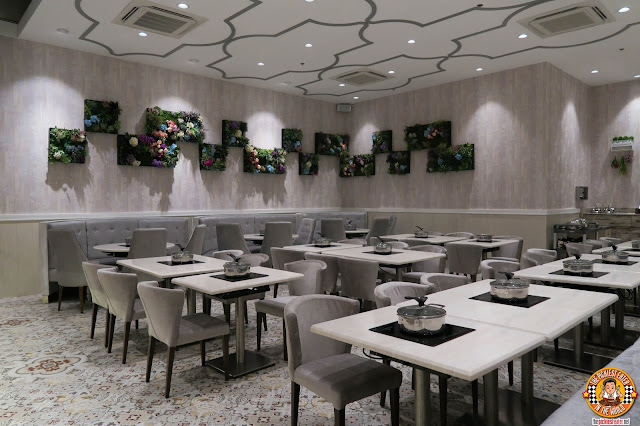 Just like Vikings and New, the dining area of Four Seasons Cubao is spectacular. The interiors exude class and elegance that belies the affordable price of their buffet. You get the feeling of luxury without having to feel the burden of extravagance in your wallet.


What sets Four Seasons Cubao apart from other Hotpot Restaurants, including its Mall of Asia Branch, is the buffet selection. The Cubao branch is basically a fusion of everything you love about Four Seasons MOA, and their popular sister company, Vikings. 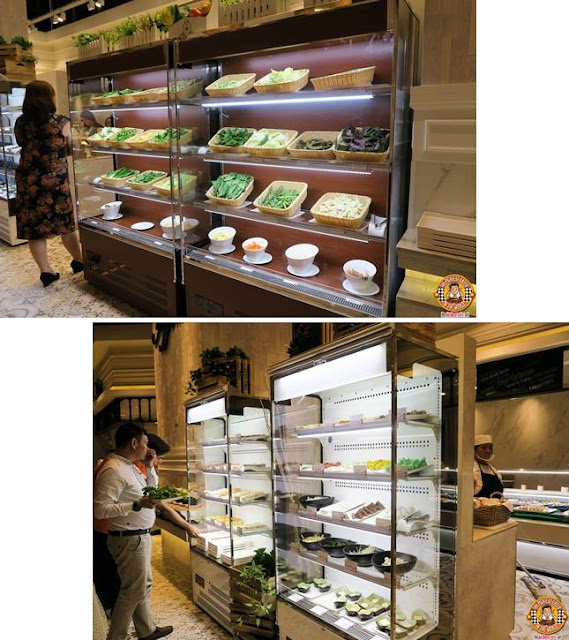 You select your Fresh vegetables to throw into your hotpot.. 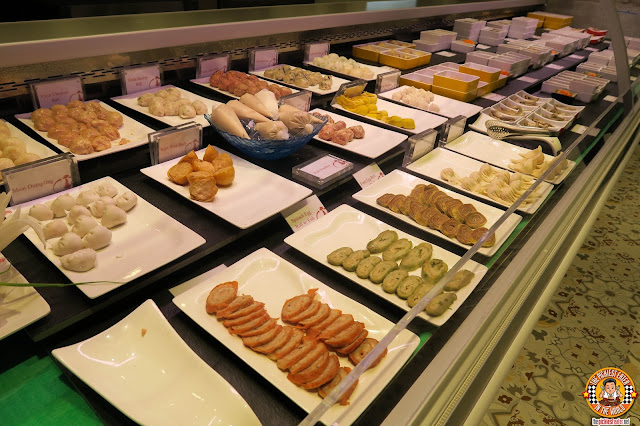 As well as a wide selection of sausages and dumplings,
and other food items that you can throw into the pot.. 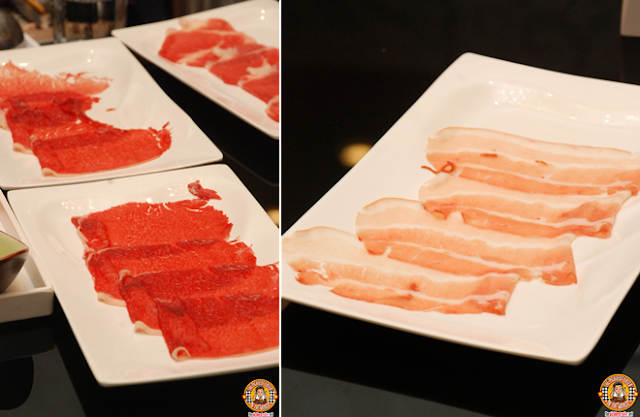 The selection of meats is impeccable. Ranging from premium US Beef cuts to Baconesque (I made that word up hehe) Pork Belly Slices, Chicken Pieces and more! 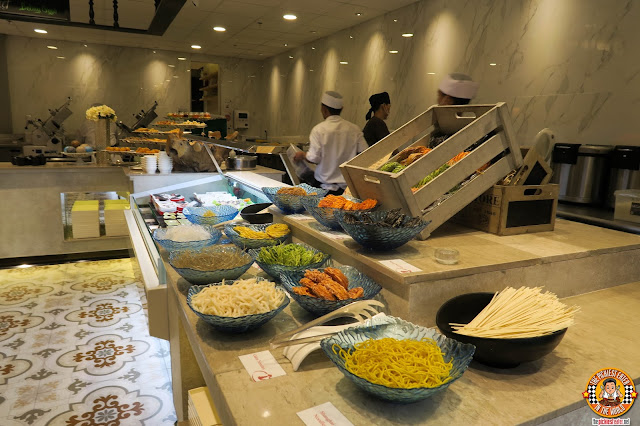 And you finish it off by selecting from a wide array of noodles to enjoy your soup with.

Given the pedigree of the restaurant group, you know that Four Seasons knows how set up a mouthwatering buffet spread. 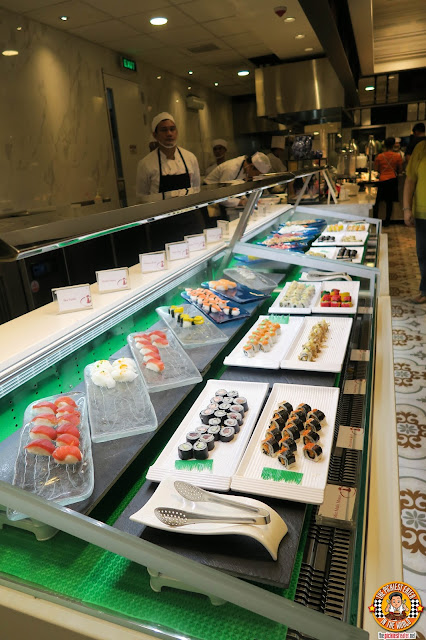 Ranging from a wide selection of Sushi and Sashimi.. 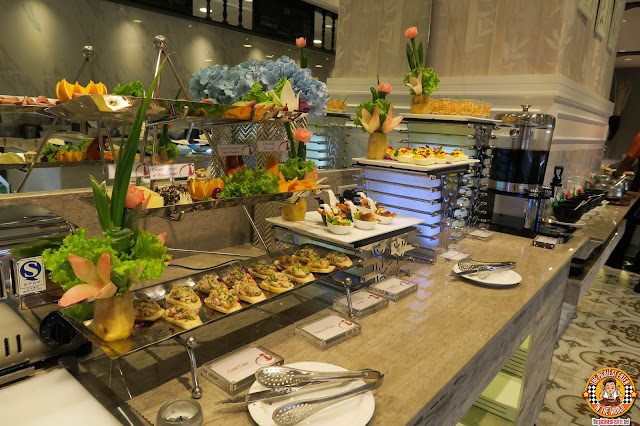 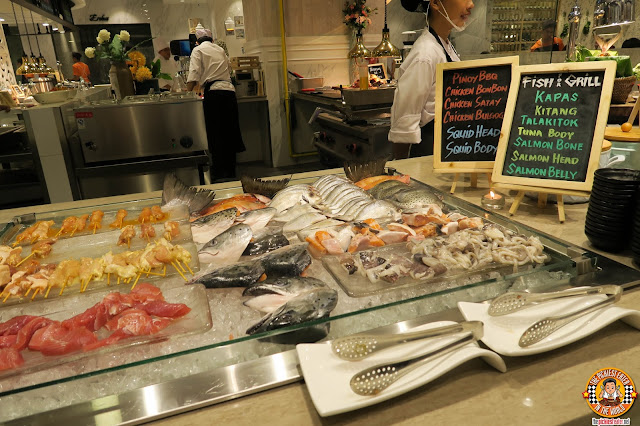 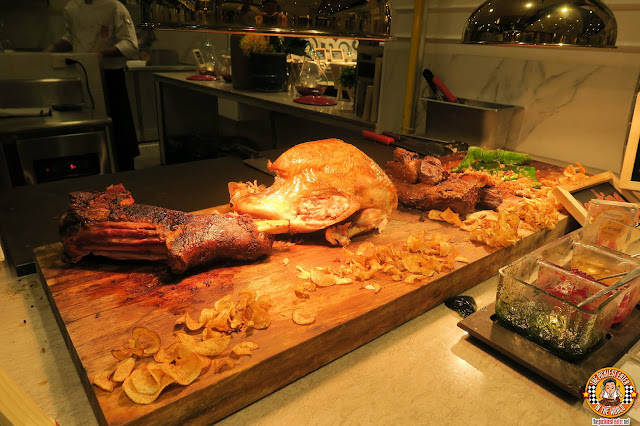 A glorious Carving Station featuring Leg Of Lamb, Roast Turkey, Roast Beef and if you're lucky.. 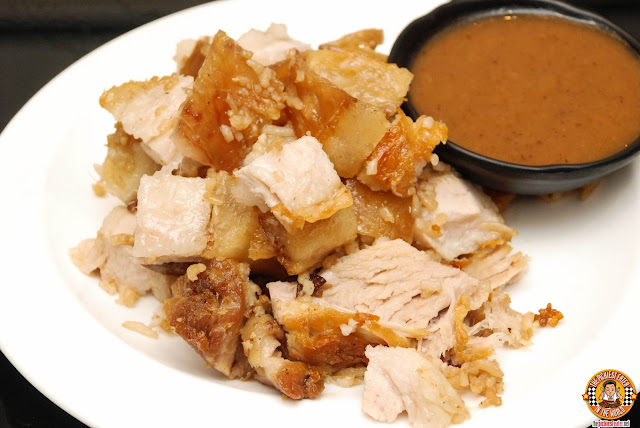 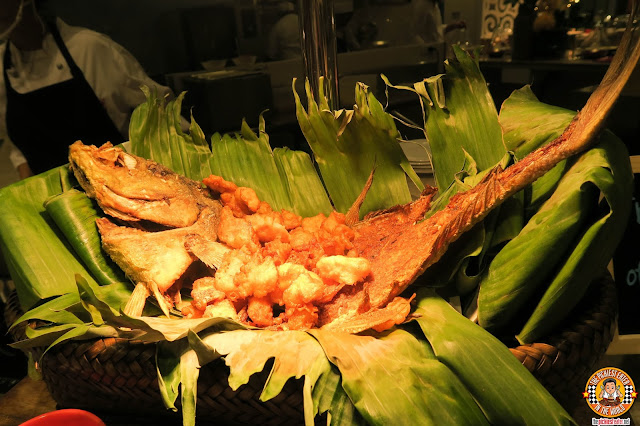 The Deep Fried Fish was one of my favorites of the evening! 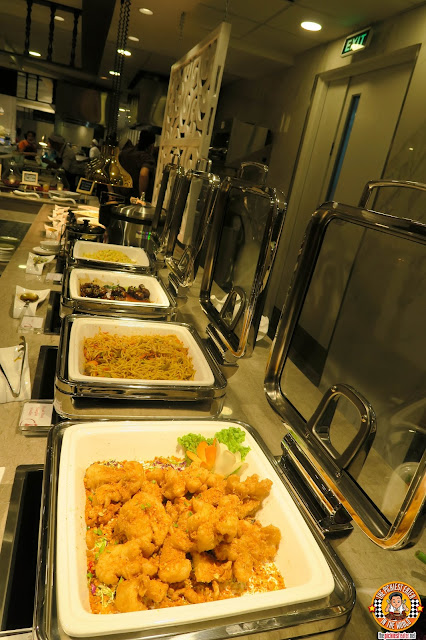 Their other cooked dishes were a selection of food from around the world.. 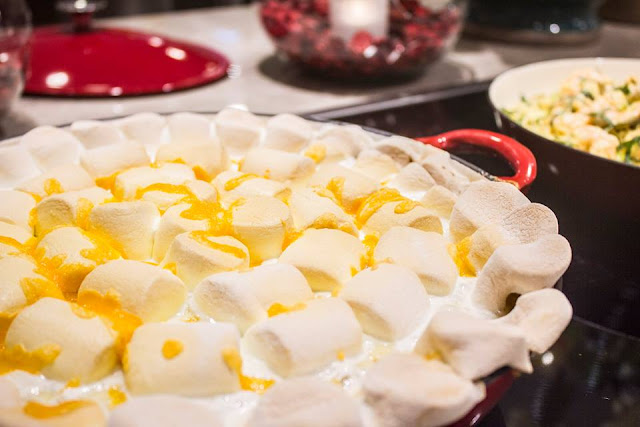 But something you must not miss (which I wasn't able to get a picture of  because every time I tried to go and take a picture of it, the chafing dish was virtually empty and didn't look visually appealing) is the Sweet Potato Mash with Three Cheese and Roasted Marshmallows.. It's amazing! 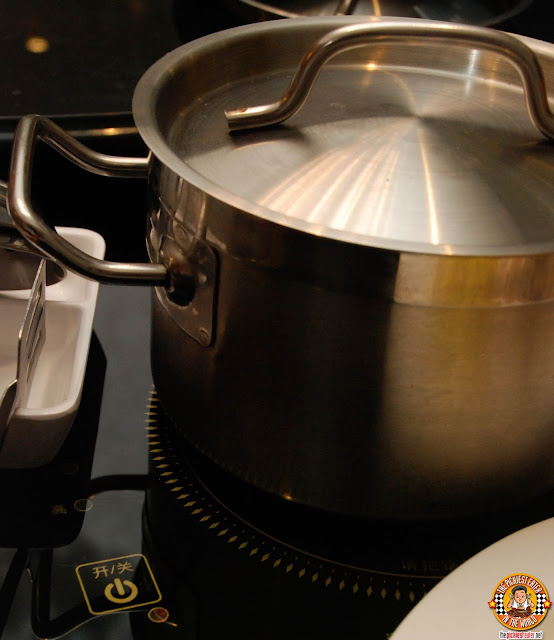 Our group was billeted at one of Four Seasons three function rooms, that can hold up to 10 to 12 people. Each glass top table setting is equipped with a built in burner and a small hotpot where you may make your own concoction. 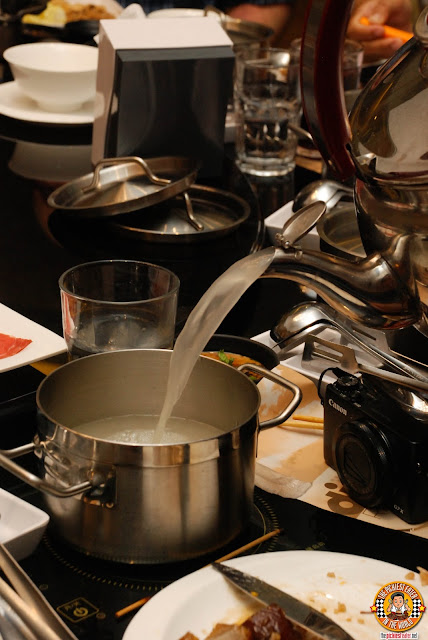 You select from the several broth options, and the waiter will gladly pour it into your pot, with free refills! hehe.. 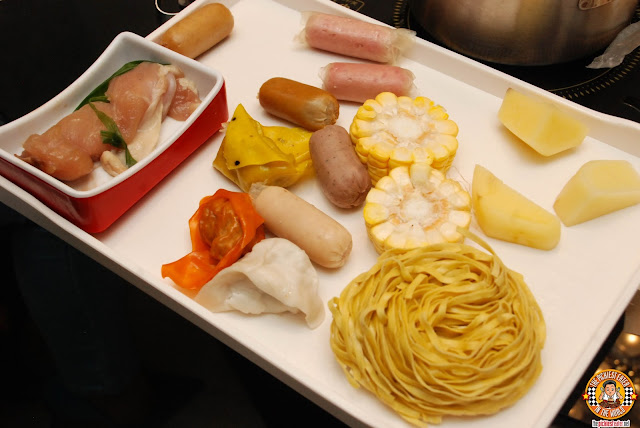 As you can see, I got a mixture of Chicken Dumplings, Sausages and Veggies (Corn and Potatoes).. 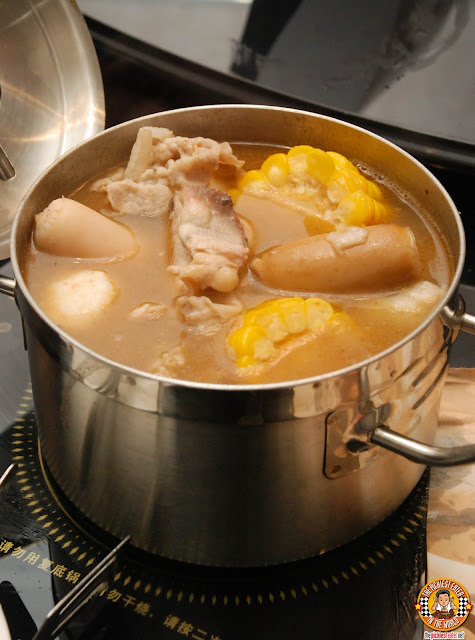 I tried it but I found it a bit lacking the punch of flavor I wanted.. 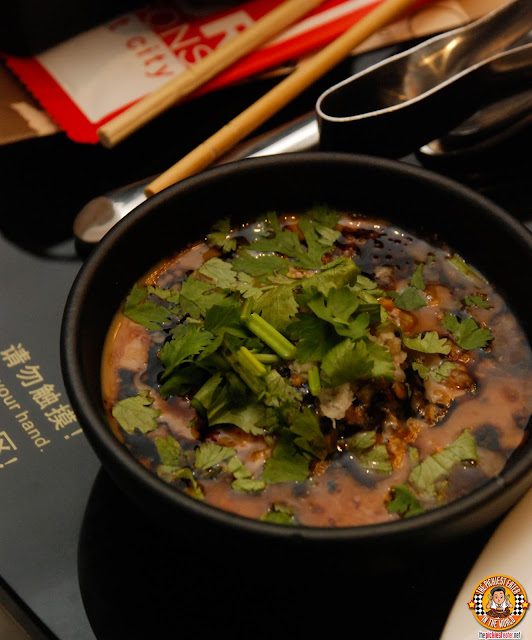 It was only then that Raquel, Four Seasons Marketing Maven, taught me how to make the Four Seasons Mix, which is the perfect sauce to go with my hotpot! 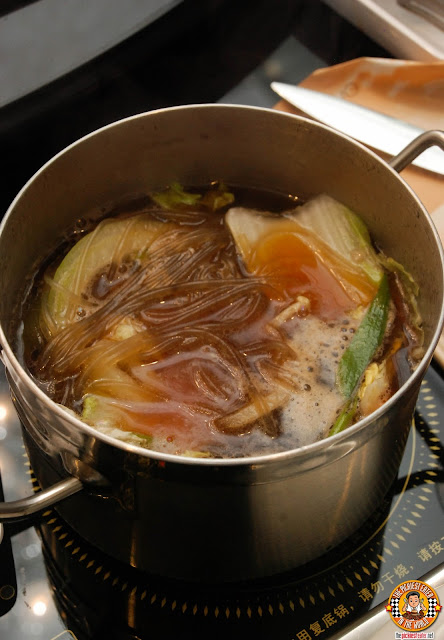 Also, I was pleasantly surprised with how excellent their Sukiyaki was!
It had a beautiful balance of sweetness and saltiness that was really addicting! 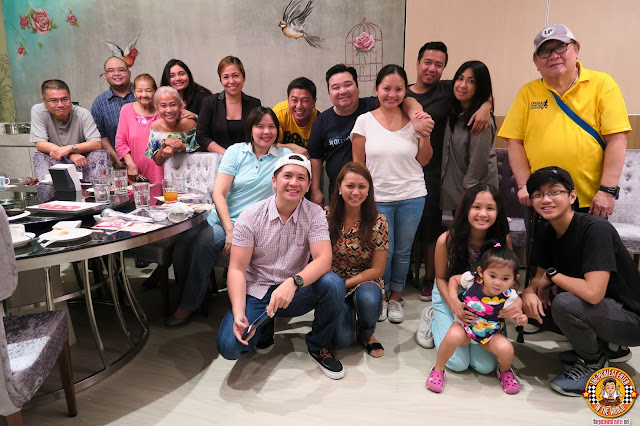 Our incredibly fun evening was filled with amazing food, great company and good vibes! Everything we look for in a spectacular meal! Congratulations to Charles, Raquel, Sky, and the entire team behind the opening success of Four Seasons HotPot & Buffet in Cubao!

I'll be back very soon!