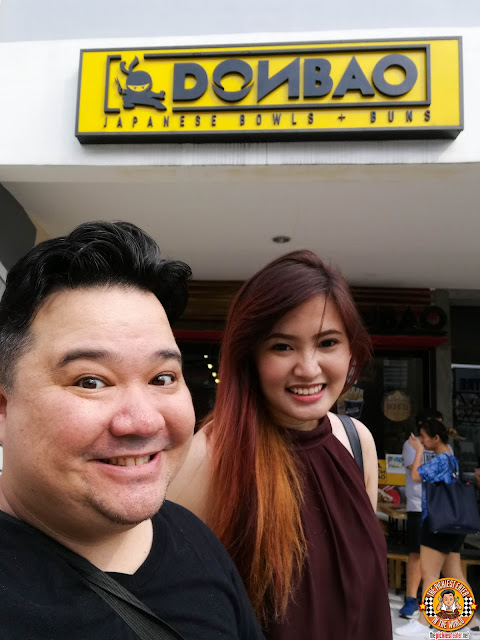 I am a huge fan of Baos. In fact, when I visited New York in 2012, one of my first stops was the popular Baohaus, perhaps one of the restaurants that helped catapult the Bao into international attention.While Rina, on the other hand, is a rice girl through and through, so whenever we go out, there usually needs to be a promise of a decent rice meal some way or some how. During one of the KTG's eating adventures, I discovered a cozy little place that specializes in not just Baos, but Japanese "Dons" as well.. Meaning rice bowls. The marriage of the delectable Dons and those breathtaking Baos became the the foundation of a a charming little restaurant in Pasig.. Don Bao. 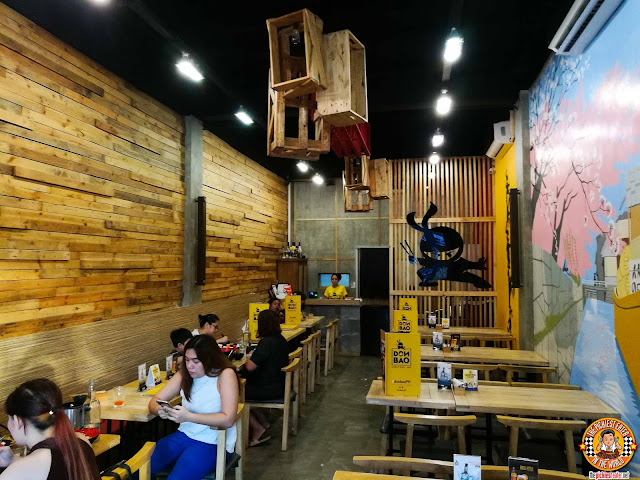 With its numerous restaurants sprouting left and right, Kapitolyo in Pasig has become known as a foodie heaven. The nearby Brixton street has quickly emerged into a growing foodie hub as well. With its mix of innovative Baos and Japanese rice bowls Don Bao has become a rising one of those must try restaurants that helped establish that reputation. 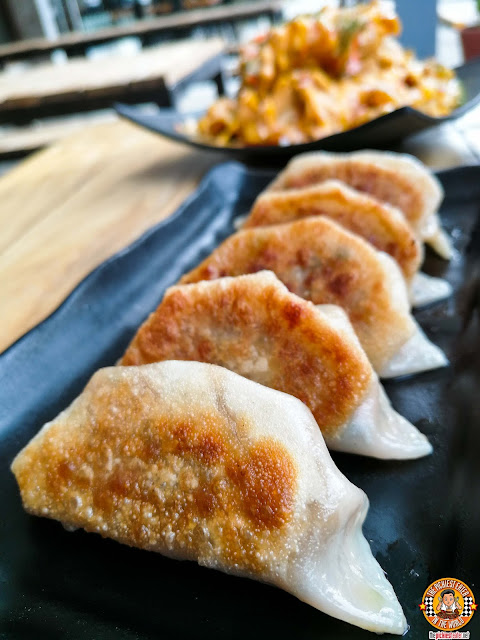 Gyoza (P150) is always a great way to start a Japanese meal, and Don Bao's version is the classic done right. It's [acked with flavorful meat and wrapped nice and tight before pan frying on one side, allowing for a delicate crisp. Want to know how good these Kani Nachos (P180) are? Think about this. I don't eat kani. As in, I actually loathe it. But holy crap, I couldn't get enough of this. The hand cut Potato Chips made in house are topped with Shredded Kani and nori before being doused in Don Bao's own, Special Cheese Sauce. Yet another starter that you shouldn't miss out on! 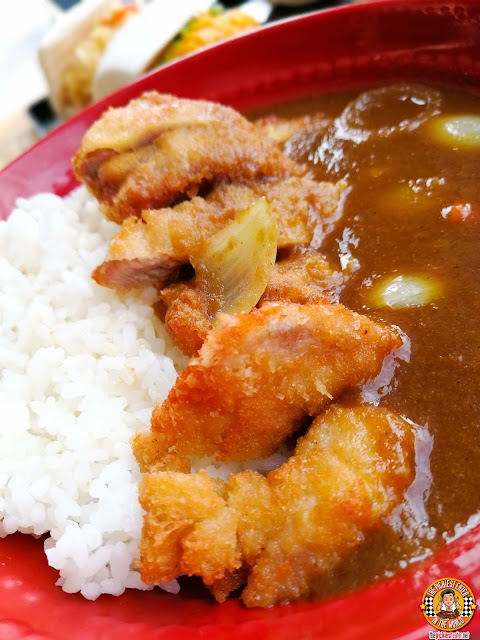 The Katsu Curry Don (P270) was a hit! The Katsu itself was crunchy on the outside, and delightfully juicy on the inside, while the Curry sauce was spot on. Rich and vibrant, while giving off just the right touch of heat, which is tempered by the fluffy Japanese rice. 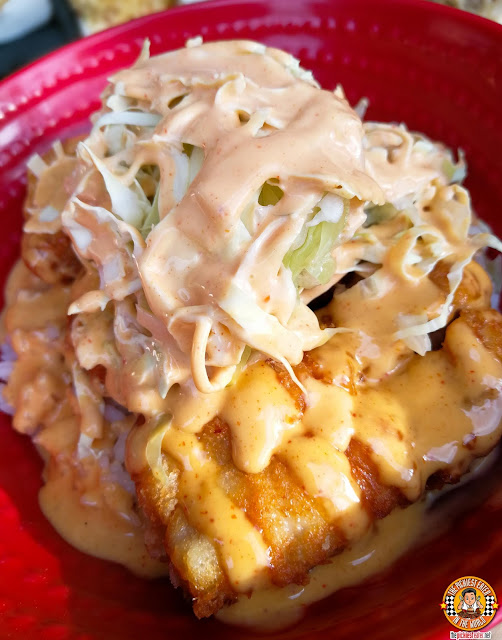 The Crispy Chicken Don (P230) was also one of my favorites among the Dons. The Chicken was also deep fried to a gorgeous golden hue, and was topped with a healthy helping of shredded cabbage bathed in Japanese Mayonnaise. 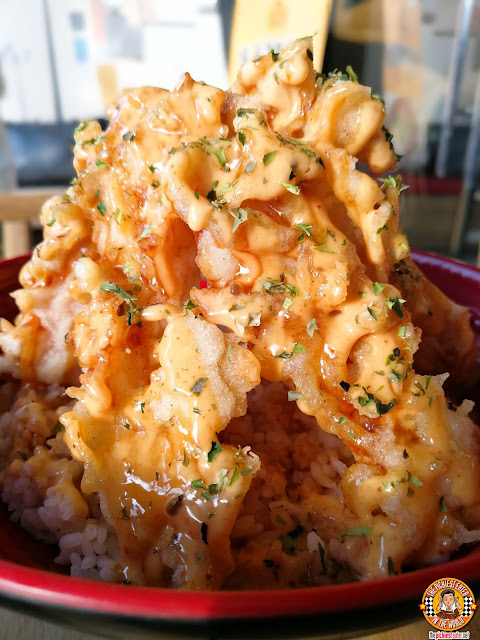 Seafood lovers may opt for the the Special Tendon (P280) was made with pieces of breaded Kani and Shrimp, deep fried to a glorious crunch, then drizzled in a blend of Japanese Mayo and their "Special Tendon Sauce", that matches perfectly with a scoop of steamed Japanese Rice. 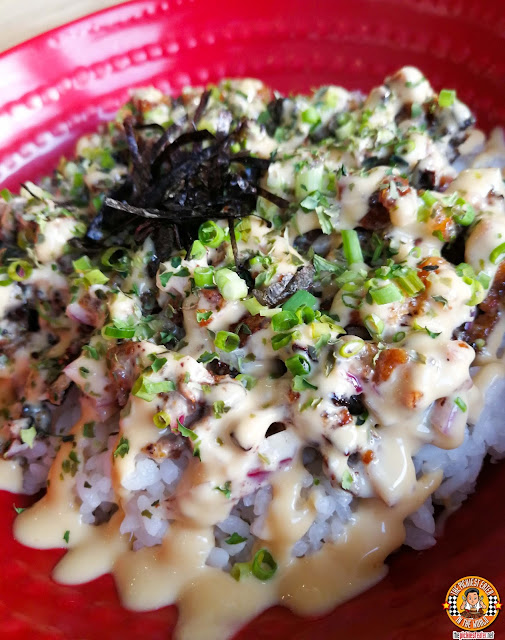 Being the Filipino classic it is, Sisig is perhaps the last dish I'd ever thought I'd find at Don Bao, but the Buta Sisig Don (P260), was a wonderful fusion of two cultures, in a rice bowl. Bits of minced Pork Sisig is slathered in Japanese Mayonnaise and topped with shredded nori. The smokey savory bits of pork was complimented by the creamy mayo, making you crave for one bite after another.

Admittedly, I would most likely request that the Nori be separated next time.

As much as I enjoyed the Rice bowls, it was the Baos that I was really excited to try. 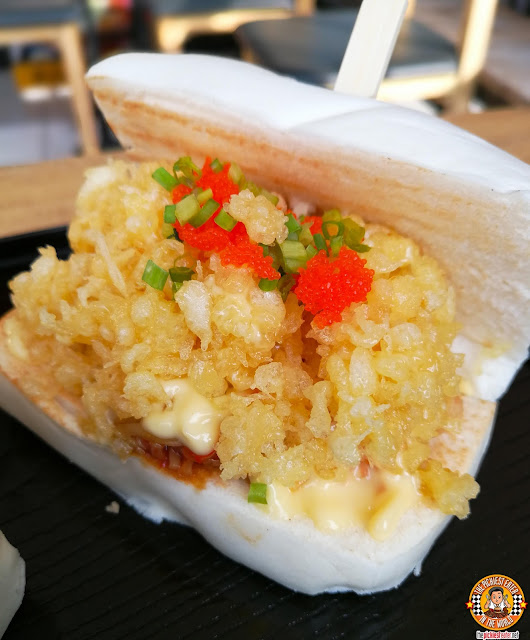 The first Bao they brought out, was the Crazy Bao (P120). This was strips of Kani, doused in Eel Sauce and Japanese Mayo, then sprinkled with Tempura Flakes, Tobiko (aka fish roe), and garnished with Spring Onions.
As I said, I'm not a fan of Kani, so I decided to skip this, but my friends swore by it. 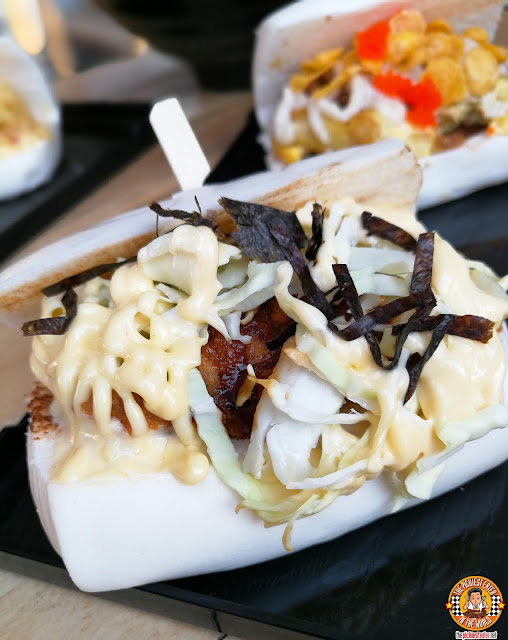 The Piggy Bao Ride (P120) was more up my alley. A delicious chunk of Pork Katsu is coated in a lightly sweet Teriyaki Sauce, then drizzled with Japanese Mayo, and topped with Cabbage, and Nori. There was a wonderful sweet meets soy offered a symphony of flavors from the sauce, that was balanced by the Mayo. This was definitely something I'd order again. 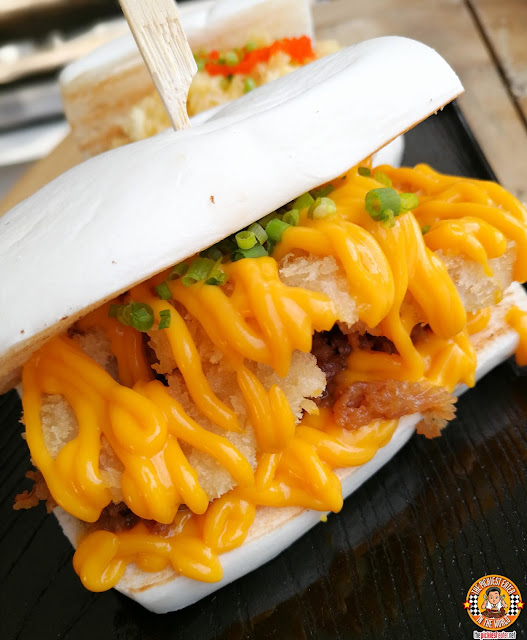 I had two favorite Baos from Don Bao, with the Cheesy Bao (P120) being one of them. Strips of beef Gyuniku drowned in a rich Cheese Sauce, topped with deep fried Onion Rings, and a sprinkling of Spring Onions. The play of textures, the vibrance of flavors simply worked harmoniously together, and I couldn't get enough of it. 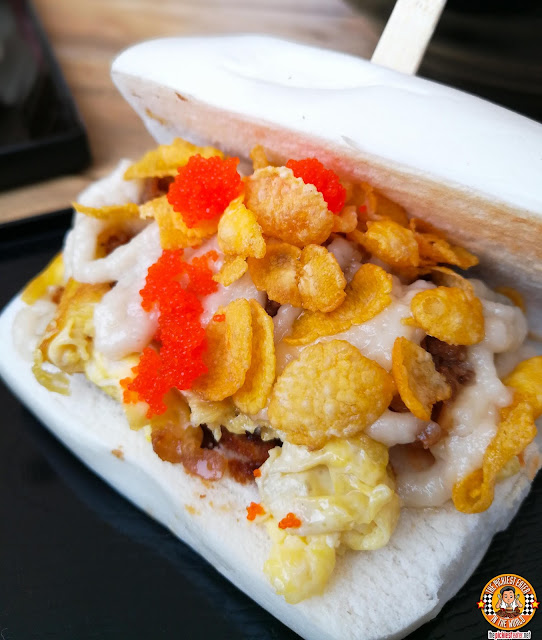 Good Morning, Bao! (P120) was absolutely dynamite. Made again with a Beef Gyuniku base, the Bao is filled with Scrambled Egg, a sharp Garlic Mayonnaise, then topped with Cornflakes, and Tobiko. The cornflakes added a lightly sweet touch to the Bao, and worked weirdly with the garlic mayo and the savoriness of the beef. 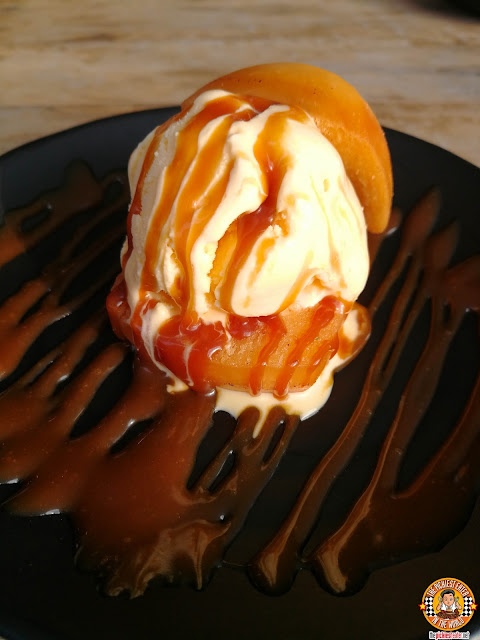 It was really impressive how they managed to turn Baos into desserts as well, beginning with the Fried Bao with Ice Cream and Salted Caramel (P95). The creaminess of the ice cream balances the salty sweetness of the caramel, while the fried bao offers a bit of texture with its light crunchiness. 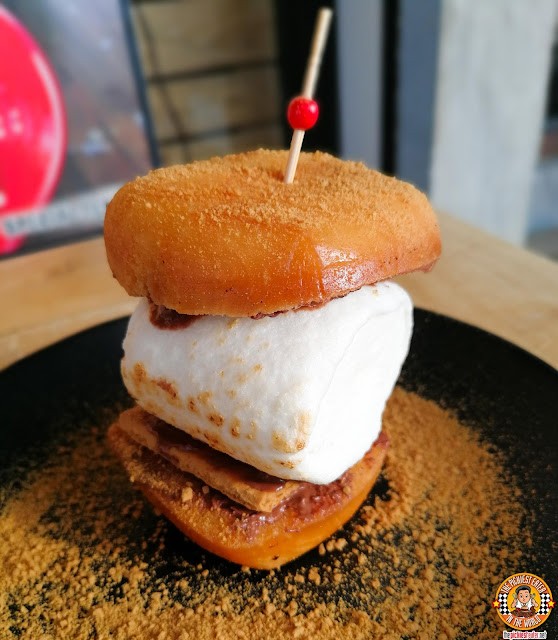 Another delicious concoction was the Fried Bao with Nutella S’mores (P95), with the fluffy marshmallow coming together with the Nutella spread seamlessly. 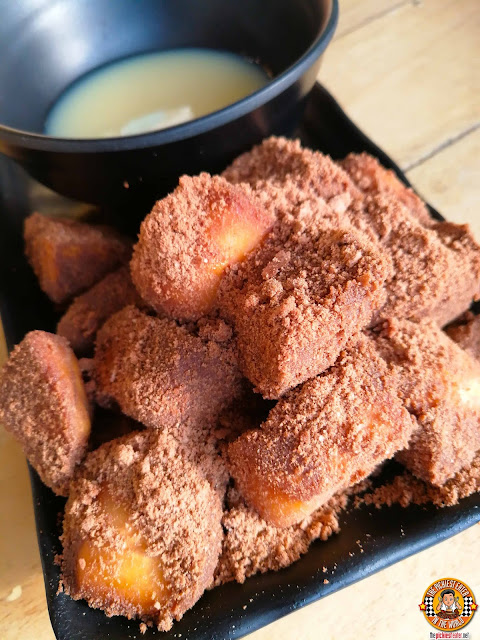 My favorite among the desserts was the Fried Bao with Milo and Condensed Milk (P95). Deep Fried Bao bites are coated in powdered Milo, that turn into little pieces of heaven when dipped into condensed milk. 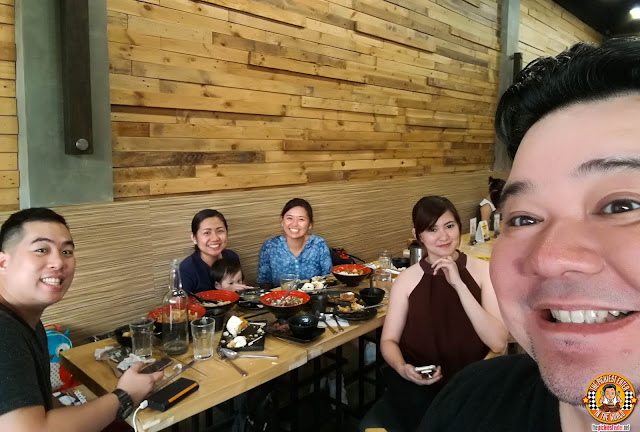 The biggest problem you'll face when dining at Don Bao is wanting to try every thing on their menu, or not knowing whether to go for a Bao or a Don. Good thing the prices are very reasonable (including a promo of Two Baos for only P200!) so you don't need to break bank when ordering a full meal! I am indeed looking forward to my return to Don Bao! 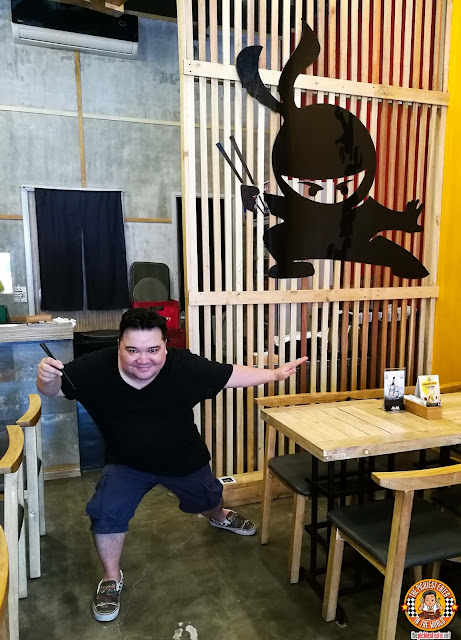 Rest in Peace, my shorts. 😭

Email ThisBlogThis!Share to TwitterShare to FacebookShare to Pinterest
Labels: Brixton Street, Don Bao, Donburi, Kapitolyo, where to eat in Kapitolyo