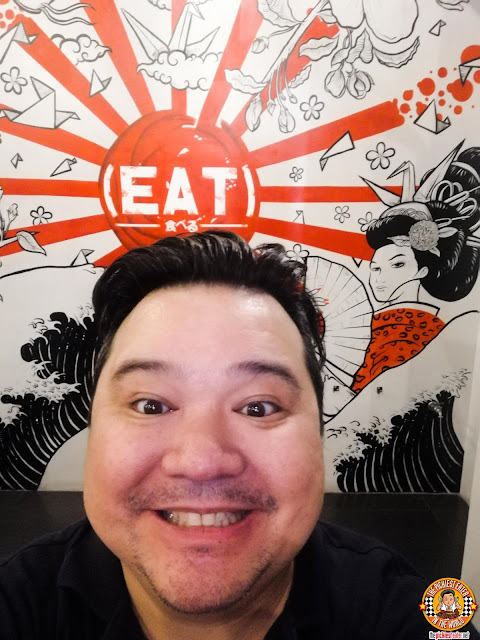 Though I studied in The College of St. Benilde in the 90's (Matanda na Tito Richie niyo), admittedly I had never heard of the place they call "Syfu's Grill", which seemed to be incredibly popular with La Sallians.

The sun may have set on Syfu's Grill, however from its ashes, a new concept has risen, and with consultant Chef Kel Zaguirre developing a "Street Food with a Japanese Kick" theme to the menu, Eat 9707 is shaking the foodie world to its very core. 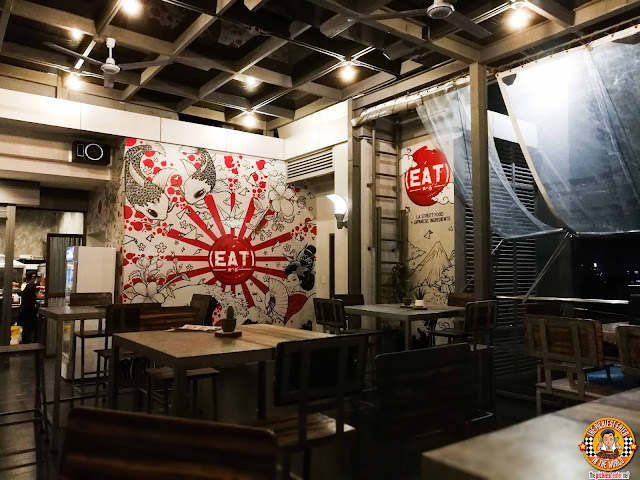 Eat 9707 is perched on the rooftop of 9707 Kamagong Bldg, giving you a nice view of the San Antonio neighborhood, making it a nice place to throw back some drinks after a long day, or in my case, enjoy a wonderful meal. 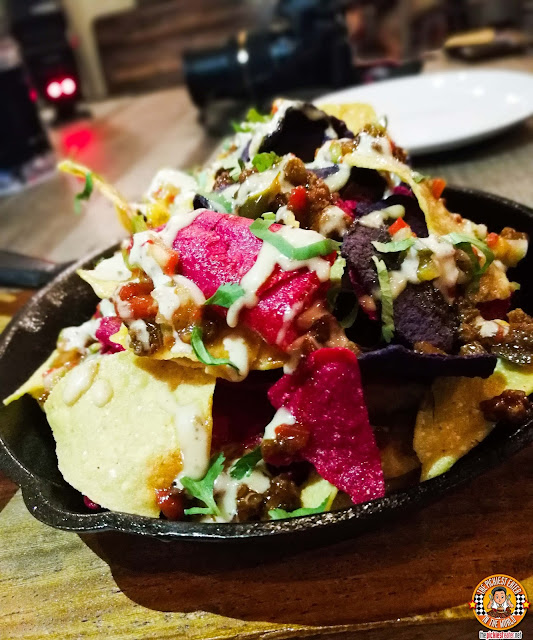 Eat 9707's opening salvo was the phenomenal Meat Sauce Nachos (PHP250). Deliciously crisp tri-colored Nacho Chips, topped with what is described as Eat 9707's "bull dog picadillo" and blended with mango pico de gallo, then drizzled with a creamy sesame dressing and sour cream. This is undoubtedly an awesome way to start your meal! 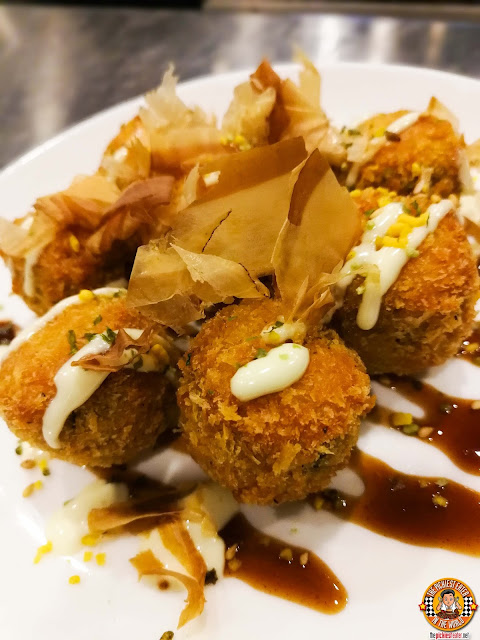 Another appetizer brought out was the Spam Musubi Bites (PHP220).  Rice balls are stuffed with Nori-Wrapped chunks of Spam, coated in a panko crust and deep fried to a golden hue, then drizzled in "Bulldog Sauce", and speckled with Japanese Mayo.

I would have enjoyed this more without the Nori, but it was delicious nonetheless. 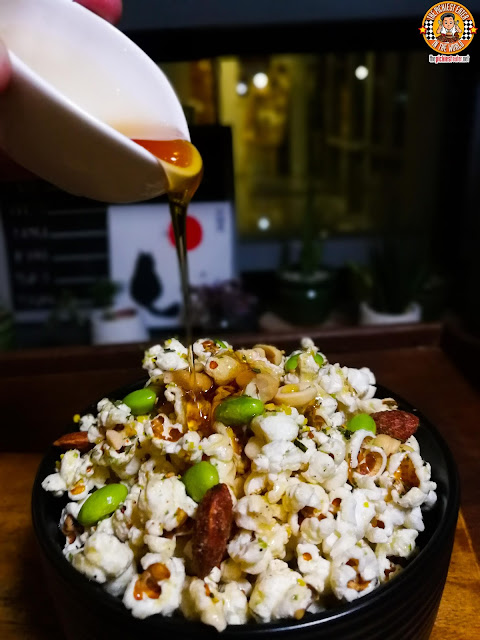 Few things are more comforting than a big bowl of popcorn, and Eat 9707 offers a rather unique take on it, making it a unique Bar Chow dish. The Truffle Popcorn & Nuts (PHP200). A bowl of of popcorn draped in melted truffle butter, and speckled with additional Edamame and Almonds. The coup de grace is when you drizzle the Truffle Honey over the popcorn, elevating the dish even further. 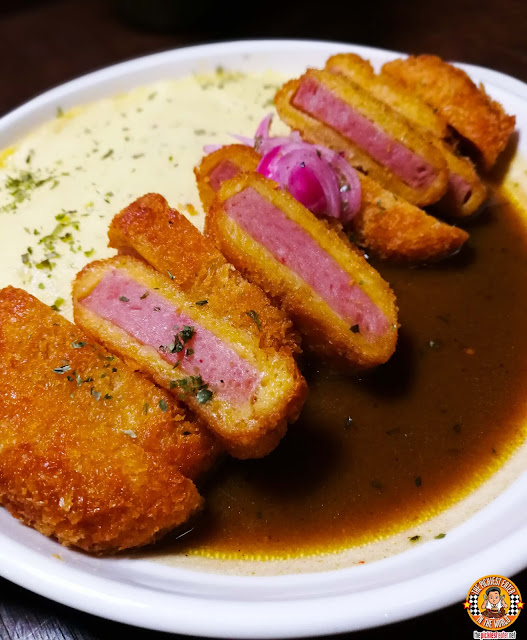 Four letters you must remember when dining at Eat 9707: S.T.C.O. 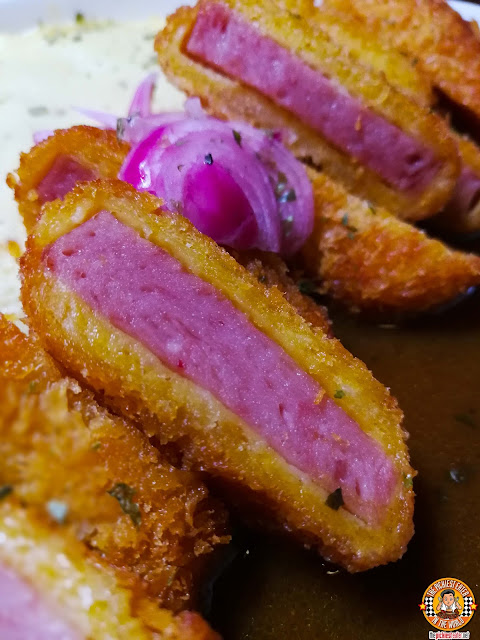 STCO stands for Spam Tonkatsu Curry Omurice.. and my friends, it is glorious. The worlds most beloved luncheon meat is encased in a golden bread crust. laid over a shallow pool of fragrant curry. 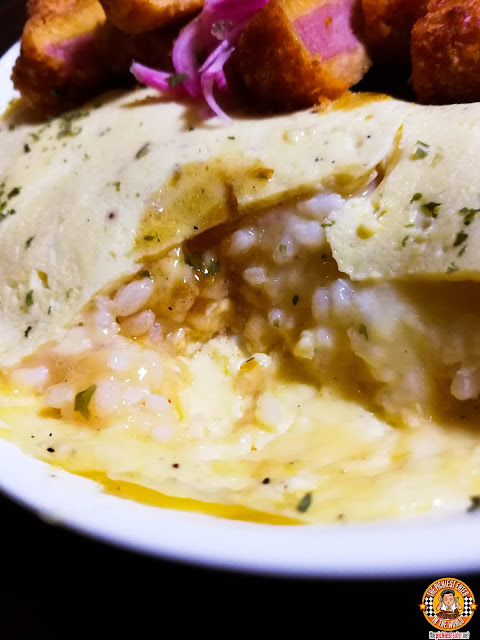 The creaminess of the delicious Omurice was the perfect balance to the robust flavor of the curry. This is definitely something I would love to order again! 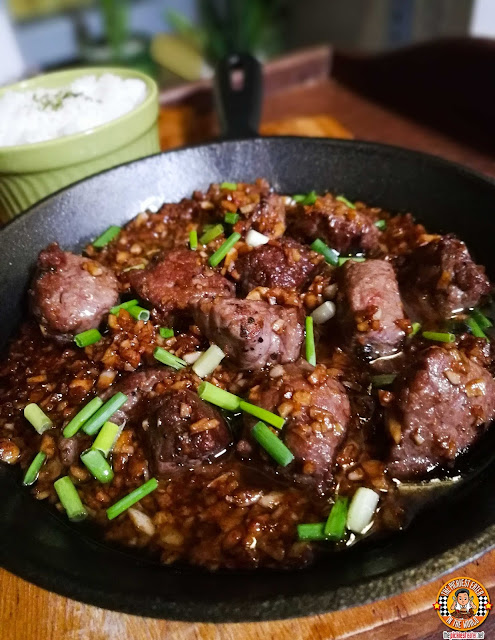 One of Rina's favorite dishes is Beef Salpicao, and Eat 9707's version of  Salpicado (PHP400) was absolutely fantastic. Juicy cubes of Beef Tenderloin are bathed in a garlic confit, and cooked with a medley of Kikkoman, Red Wine and Worcestershire sauce,  creating one of the most boldly flavored beef dishes your palate will ever have the pleasure of tasting. 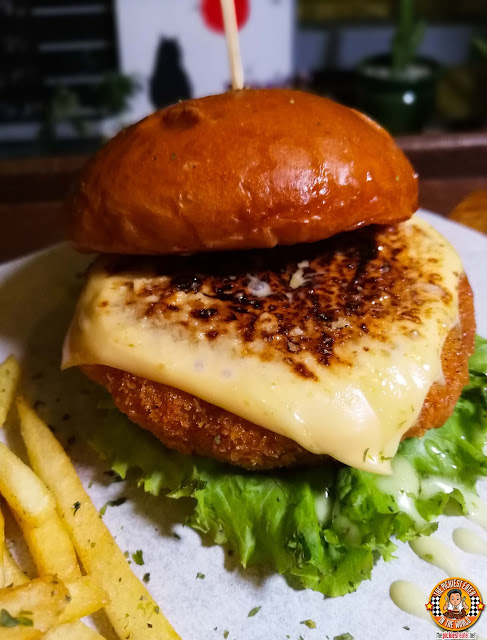 I think my love of burgers has forever been enshrined in the very first episode of my web series, but i'm also a sucker for a good katsu. Chef Kel harmoniously fused these two loves of mine when he created the Syfu's Katsu Burger (PHP390). 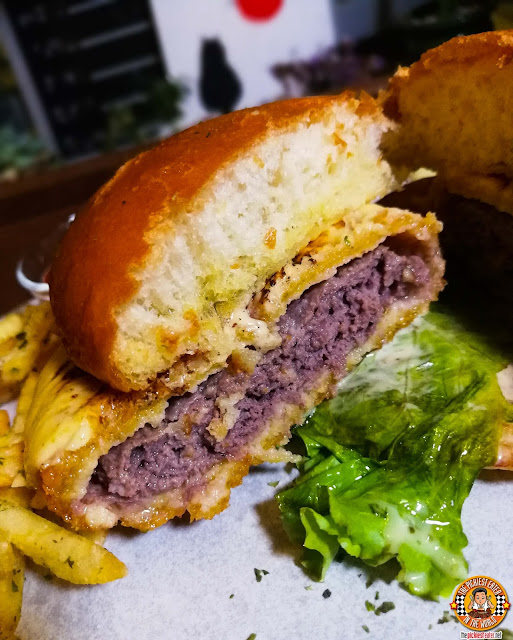 A Pure Beef Wagyu Patty is crusted in panko crumbs, and deep fried to perfection, and blanketed in torched Cheddar Cheese. The coating manages to lock in the juices of the beef, so when you take a bite, you get that nice crunchy texture you love about Katsu, but with juicy meatiness of a hearty burger still intact.

Make no mistake about it. This is one of THE BEST burgers out there right now.

One thing that was clear when the second generation of Syfus took over the restaurant venture, was that the BBQ MUST STILL BE IN THE MENU. Despite the name change, it would be absolute sacrilege to the Syfu's legacy if it was omitted from their roster of food items.

The BBQ Marinade that put Syfu's on the map still rings true to this day, with even a culinary savant such as Chef Kel, refusing to mess with it, and instead, found ways to incorporate it into other dishes in his menu. 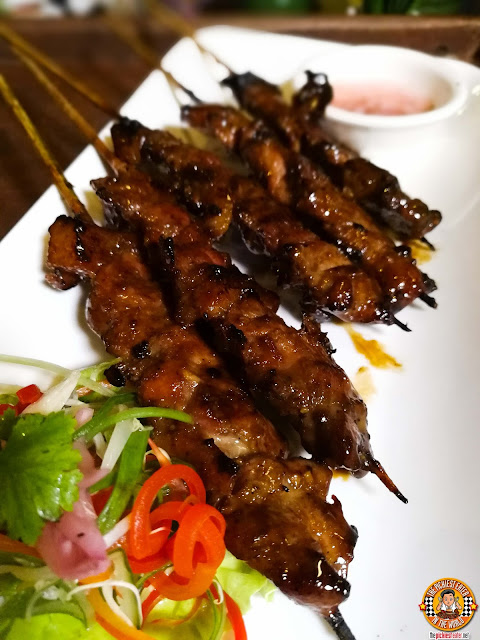 Fans of the original Syfu's will be happy to know that you can still get the Syfu's BBQ Platter (PHP250 for 5 sticks) , and it tatstes just as good as it used to. 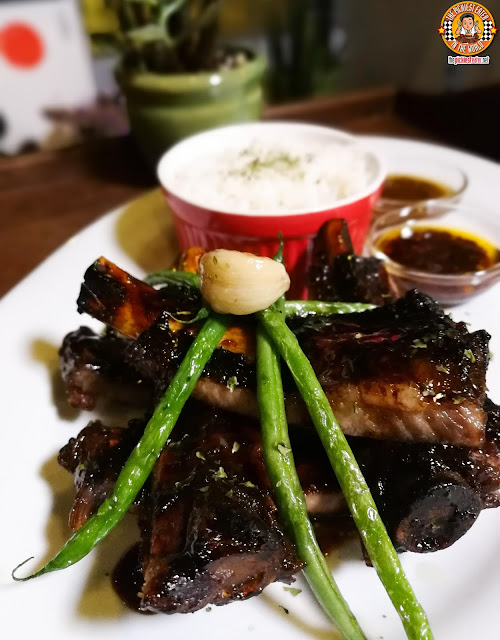 Also available are mouth watering grilled Ribs (PHP430 for a half slab and Rice or Coleslaw/P350 Ala Carte). 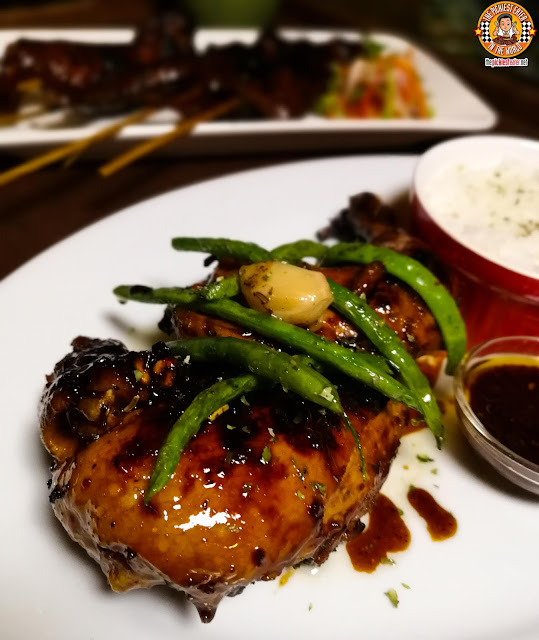 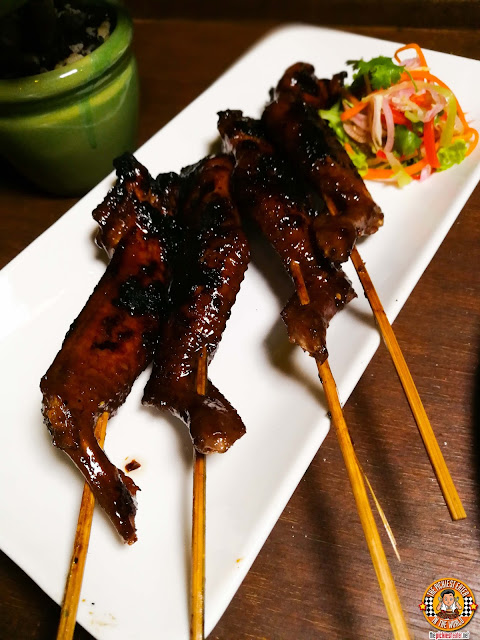 And Syfu's Chicken Wings (PHP250 for 4 sticks) are always a popular choice as Pulutan. 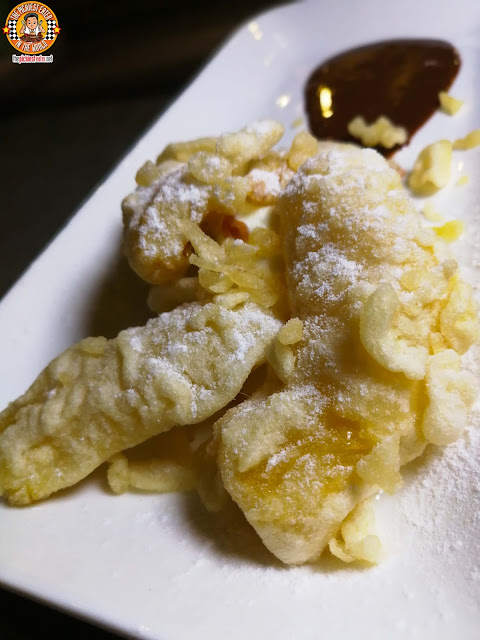 Eat 9707 also has an impressive array of desserts as well, beginning with the Banana Tempura (PHP150). Slices of banana are coated in a light batter and deep fried, and served with a Chocolate Espresso Sauce. 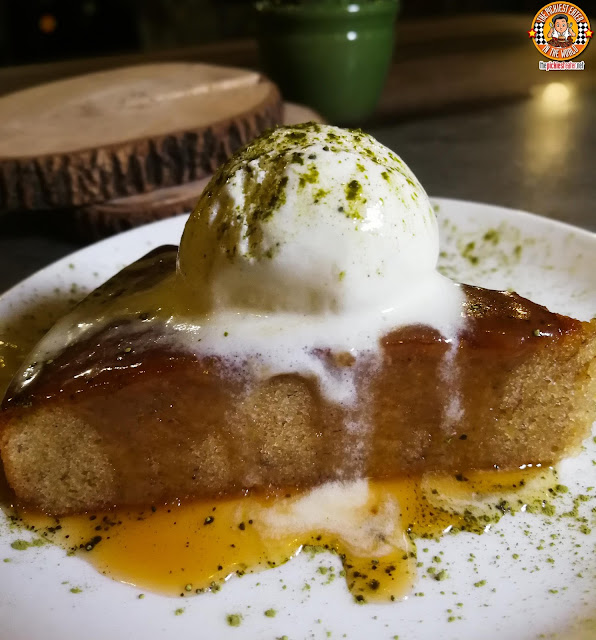 The Banana Rum Cake (PHP200) was moist and had just the right amount of sweetness, and was best paired with a scoop of Vanilla Ice Cream on top! 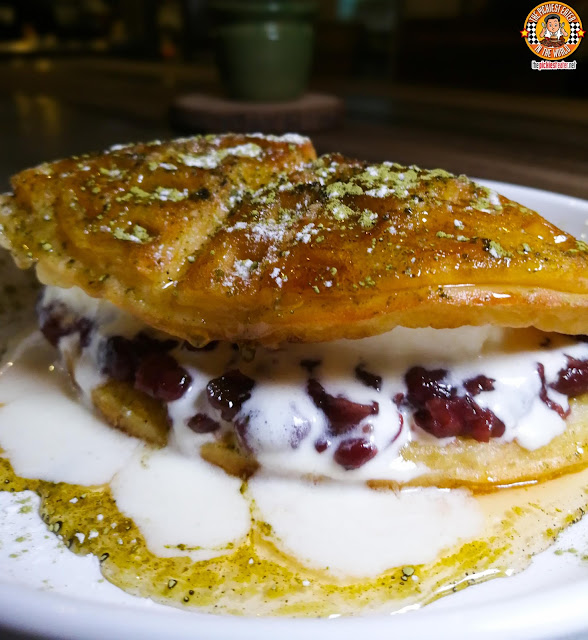 My favorite among the desserts was the Azuki-bean Waffle Sandwich (PHP220). A Fluffy Waffle is stuffed with an AMAZING Azuki Bean compote, Vanilla Ice Cream, and a dusting of Matcha powder. 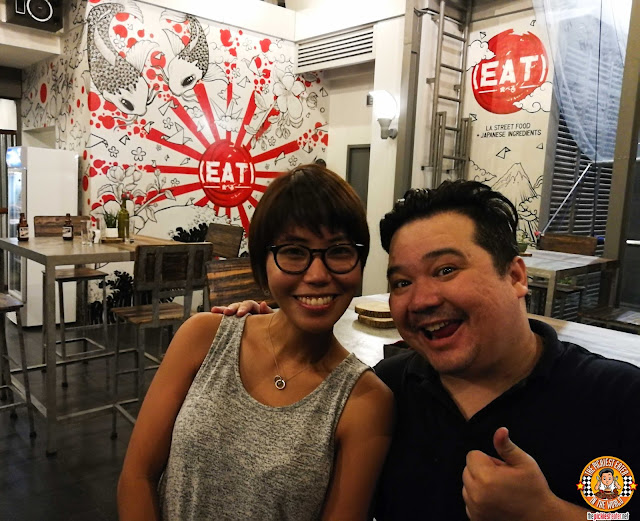 Congratulations to Direk Krizzie Syfu and her family, for helping introduce her family's culinary legacy to a new era of foodies, while keeping faithful to the heirloom recipes that gained near iconic status to the older generation. 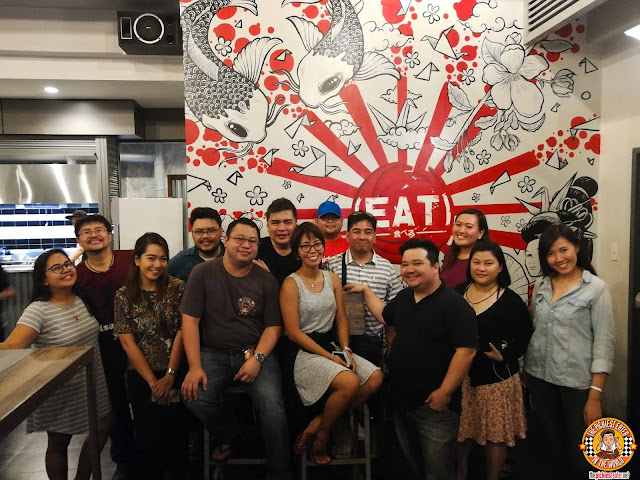 With its reasonable prices and phenomenal food offerings, It would come to no surprise if Eat 9707 has that same enduring factor that made its predecessor such a hit. 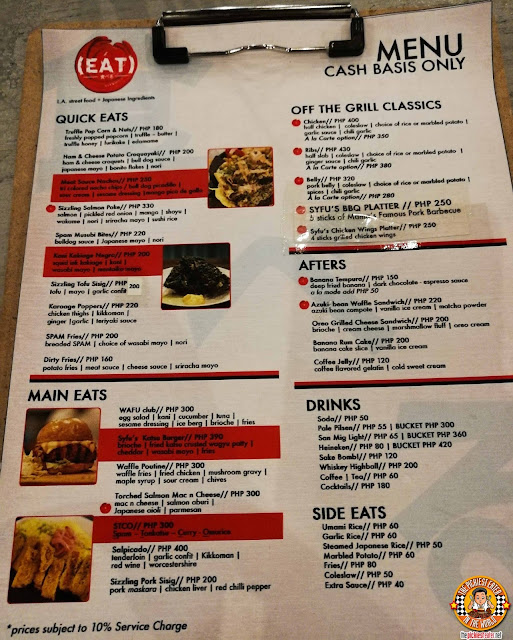 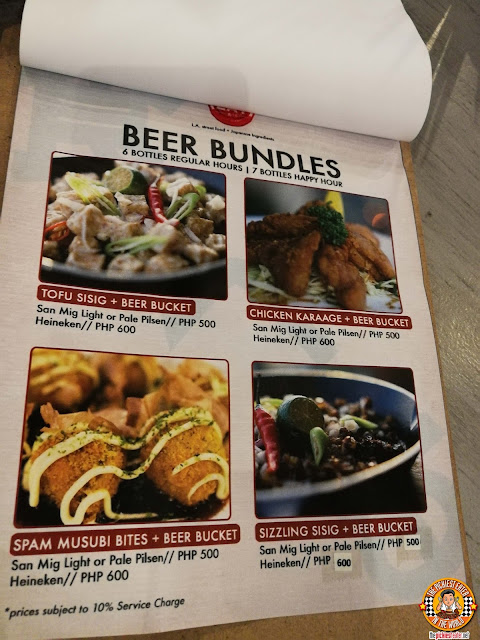