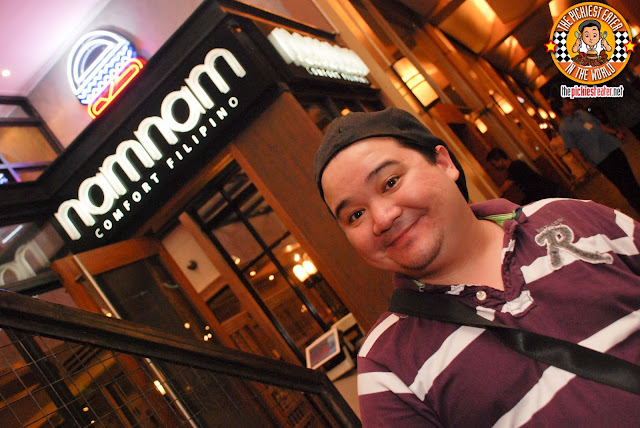 Late last year, during the "Sneak Eat" of BurgerBar to be exact, I bumped into Moment Group Co-Owner Jon Syjuco, a friend of mine since high school. Despite the burger madness that was going on, he graciously gave me a little tour of what was happening just a few feet below from us. Even though BurgerBar had yet to open its doors to the public, the Moment Group already had another ace up its sleeve, in the form of "Namnam, Filipino Comfort".

I will be the first to admit that outside of "Liempo", I've never been a huge fan of Filipino Cuisine. Which probably explains why I wasn't really too ecstatic about visiting Namnam Comfort Filipino restaurant at Greenbelt a month or so ago. I honestly had no expectations, and figured that it would be just another one of those Filipino restaurants that serves classic Pinoy food that we all know and love.
Little did I know that I would be walking into a restaurant that I now consider one of my favorites!


I had visited Namnam a couple of months before, during the launch of Coco Royal. I enjoyed the starters that was paired with our drinks, which left me quite intrigued with what more they had to offer.

In hindsight, I really should have known better. Back then, for some reason, it didn't sink in with me that Namnam is part of the Moment Group of restaurants.. and with Cue' Modern Barbecue and BurgerBar already one their Roster, they haven't missed the mark with me yet. (I still haven't been back to Cue' to review their other items yet.. but I hope to go back soon!! Sniff.. Bacon Slabs.. Sniff..).

Though I was more or less on the mark when I said that Namnam would be serving all time favorite Filipino dishes, what I didn't foresee was how they would also offer their own modern take to it as an alternative, dividing up their menu to two sections: "Classics" and "Twists".

If you're looking for your old school favorites, then Classic is the way to go. If you're feeling a little bit more adventurous, than you might want to take your taste buds out for a "Twist'. 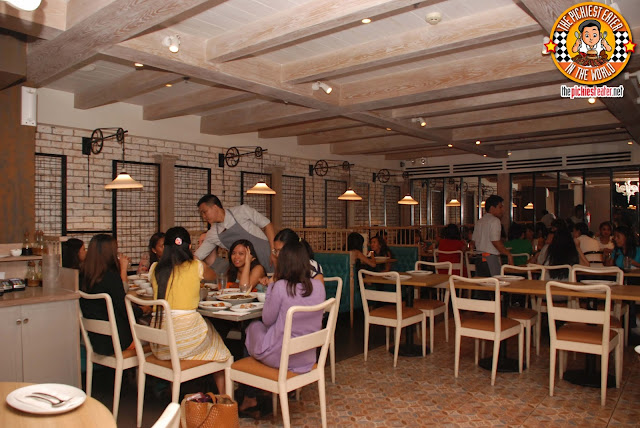 The restaurant gets packed during meal times, so I suggest going early. I think felt that their interiors successfully invoked what their menu was all about. It had a classic Filipino design feel, yet with a touch of modern lines. All in all, it was definitely a comfortable place to enjoy a fine meal.

Here are some of the unique drink offerings of Namnam.. 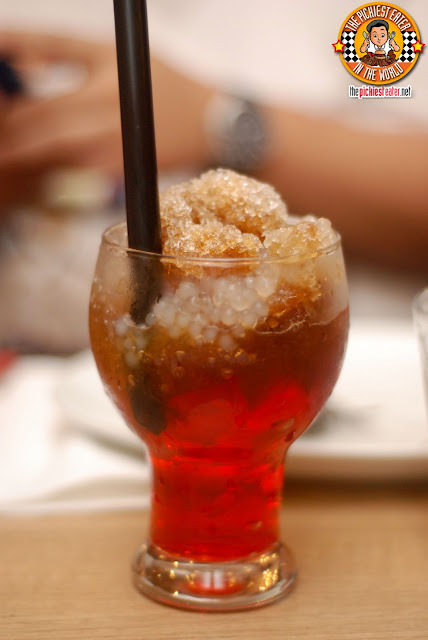 Kape Sago't Gulaman (P75).. A blend of Sago't Gulaman with everyone's favorite pick-me-up drink, that surprisingly worked well together, despite its contrasting flavors. 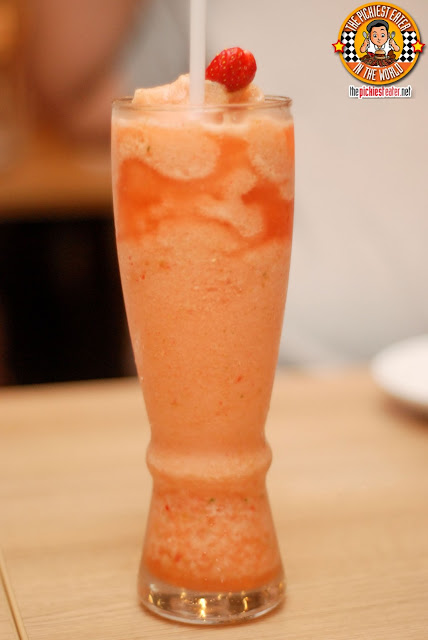 The Strawberry-Kamias Shake (P115) offered the sweetness of strawberry, mixed with a citric zing of kamias. 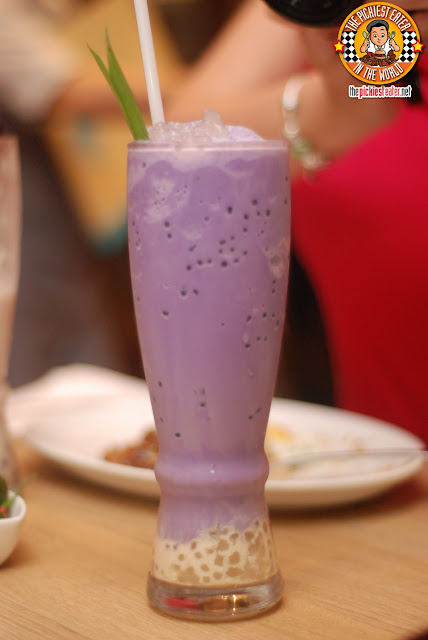 Rina ordered for ME, the Ube Sago Shake (P95), which I thought was very sweet of her.. despite the fact she knew I wasn't too fond of ube or sago. Everything became clear after it was placed in front of me, and she comandeered the straw before I was able to get my hands on it. The ube was deliciously creamy, and extremely refreshing. 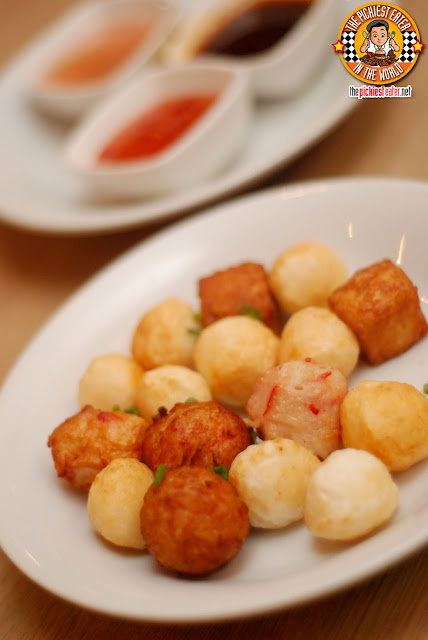 Rina said she enjoyed the Street Balls of Fish, Squid, and Crab and Lobster, with a trio of Sawsawans (P140/P255/P460). I believe her because by the time I arrived (I came around 15 minutes late), it was pretty much just an empty plate. Which was fine, because I only eat fish balls anyway hehe. 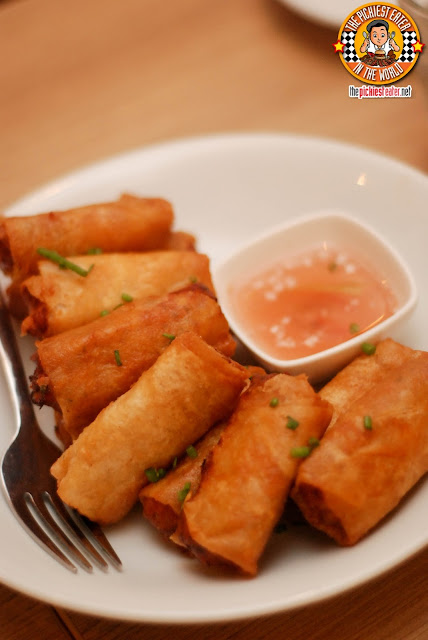 I would have been less forgiving if I had missed out on the Deep Fried Chorizo & Kesong Puti Lumpia (P110/P195/P360). I had been craving for these bad boys since I tried it during the Coco Royal Launch. The nice crunch of the lumpia gave way to the stunning ground chorizo and kesong puti mixture that lied within. 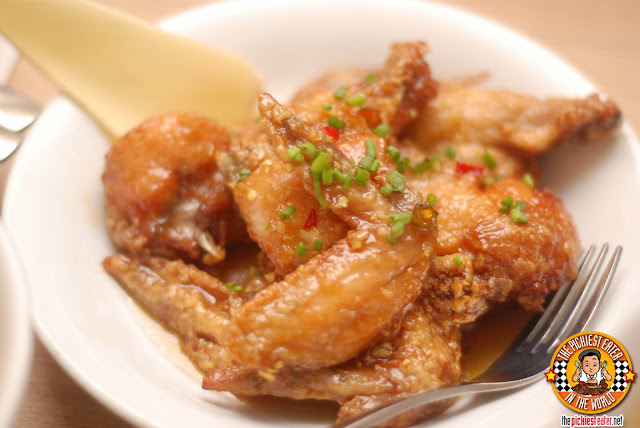 The Caramelized Patis Wings (P155/P285/P515) blew me away. I'm surprisingly ok with patis, but I truly couldn't find the taste of it in these wings, unless it was used to temper the sweetness. In that case, it worked perfectly. The exterior of the wings had a beautiful caramelized coating to it, giving the wings a bit of a sweet crunch to every bite. AMAZING. 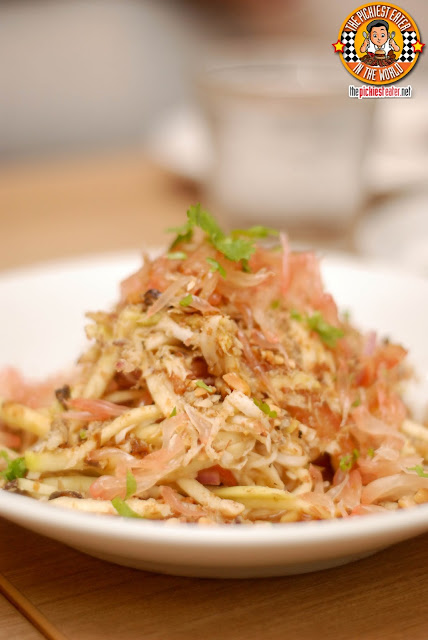 Umm.. Allow me to invoke my "Pickiest Eater" card on the Ensaladang Namnam (P115/P195/P355). I didn't try it, but Rina did enjoy it. She loved how the Mango and shrimp paste worked together with the shredded pomelo and smoked fish.

I always tell people, I actually don't eat much rice, unless it's fried rice. Which is why I was excited to see several rice dishes on Namnam's Menu! 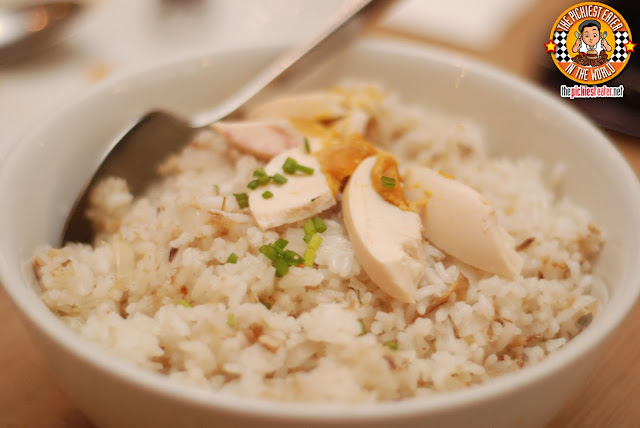 The Tinapa Rice (P65/P115/P220) wasn't something that would get your panties in a ruffle. Perhaps I was looking for a more pronounced flavor of the Tinapa, which could have been helped if the bits of the fish were a bit chunkier. 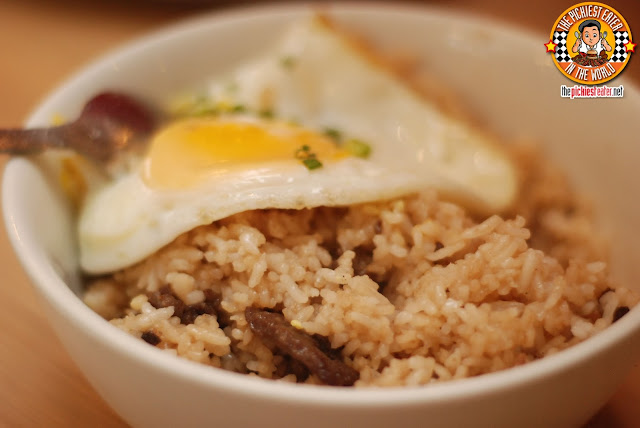 I did like the University Fried Rice (P135/P245/P460), however I think it works better as a stand alone dish than as a side order. It's basically a "Tapsilog" (which I think is a favorite meal of university students, hence the name?), complete with the fried egg on top. It was actually quite tasty. 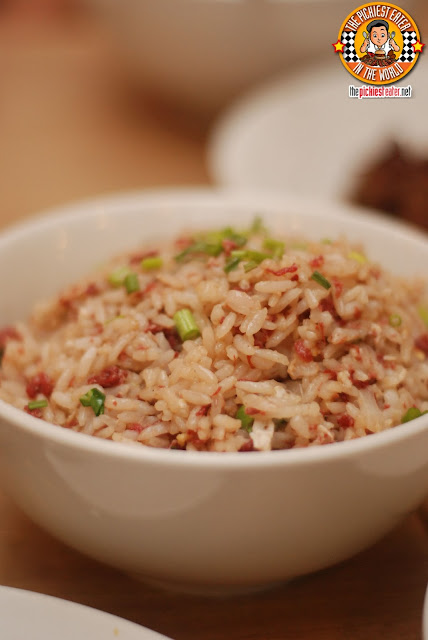 The Breakfast Fried Rice (P160/P285/P510), is something that I would have concocted had I been given keys to the Namnam kitchen. I would open up that pantry and find the BACON, Corned Beef and steak, shred 'em all up, throw an egg into the mix, and make some fried rice. Of course, my version would in all likelihood have more bacon in it, because it was the corned beef that had the most robust flavor among all the ingredients. This was fantastic. 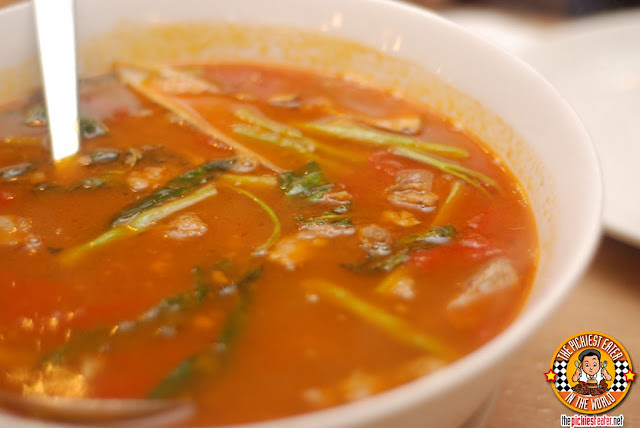 I didn't flinch when they placed this big bowl of soup in front of us. Steaming bowls of soup such as this is a staple in Filipino cuisine, so I was wondering when one of these dishes would be brought out. Rina scooped up some into her bowl, and quickly took a few sips.

As her husband, it was a little sad that the look of ecstasy on her face was one that I had never seen on her before. 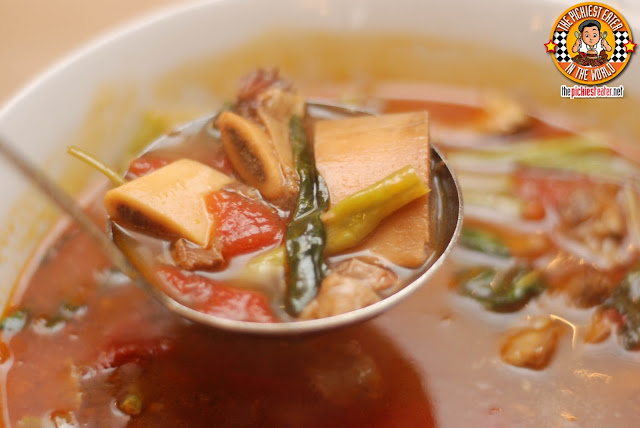 At first glance, I immediately assumed that, despite the orange tone, it was "Sinigang". But what I didn't realize, was that this was one of Namnam's "Twists". Admittedly, I don't have much experience with Sinigang dishes, but I can safely say that Namnam's Sinigang na Beef Short Rib and Watermelon (P215/P390/P720) is the perhaps one of the best Sinigang dishes I've ever had.

There was a symphony of flavors encapsulated in one large bowl of steaming broth. The ever present acidic flavor of Sinigang was still pronounced, but was tempered by the sweet juiciness of watermelon. Funnily enough, the short rib, which was tender and flavorful, took a backseat to the wonderful flavors of the broth. 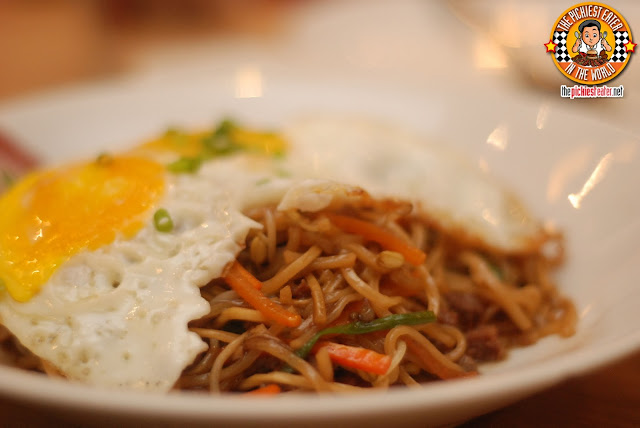 I was glad to get another taste of the Batil Patung (P170/P310/P560), which I also tasted during the Coco Royal Launch. I loved the springiness of the fried noodles, and how the egg complimented the overall flavors. Again, I would have preferred it without liver. 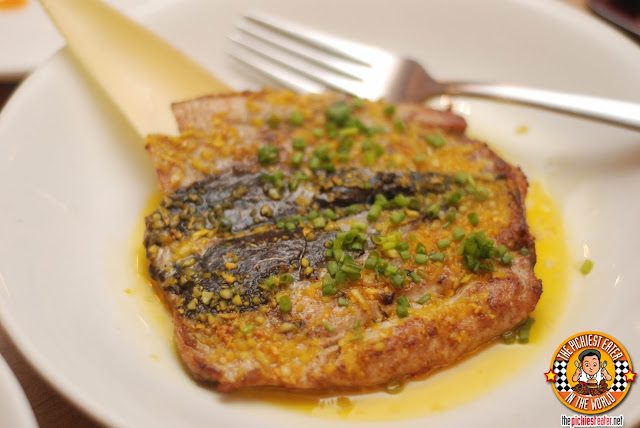 I really enjoyed the Overloaded Garlic Bangus Belly (P165/P290/P555), which was a gorgeously fried piece of Bangus Belly drowned in a stunning garlic butter sauce. 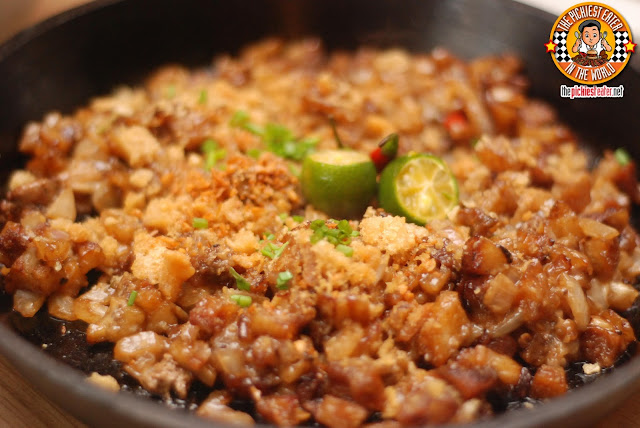 I'm gonna go all out and say it.. Namnam's House Crispy Sisig (P120/P205/P375) is perhaps the best I've ever had. True to its name, it was amazingly crispy in every bite. What made this even better for me, was the absence of any flavor of liver. 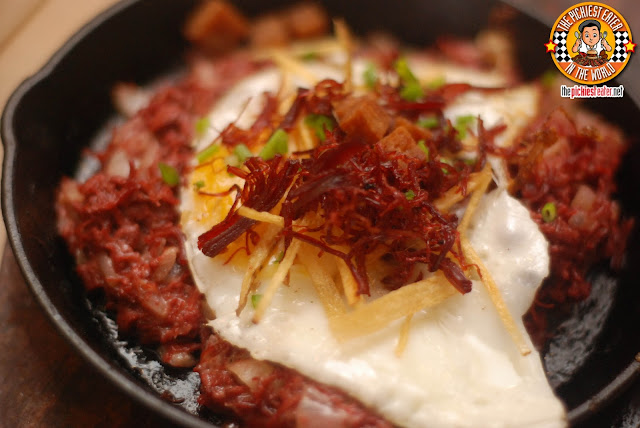 I'm pretty sure I may have mentioned this before, but it was only recently that I've found a love for Corned Beef, and the Corned Beef Sisig (P145/P265/P480) only reinforced that. I thoroughly enjoyed this very tasty, comforting dish that was topped off with a fried egg, and was the perfect partner with the breakfast rice, although I'm not sure what was so "sisig" about it. 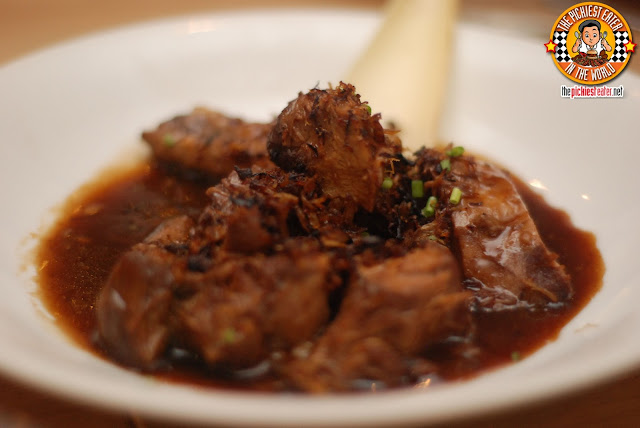 The Lamb Adobo (P198/P365/P658) was also very delicious. Chunks of tender lamb, bathed in a vinegar based adobo sauce that worked perfectly with steaming white rice. 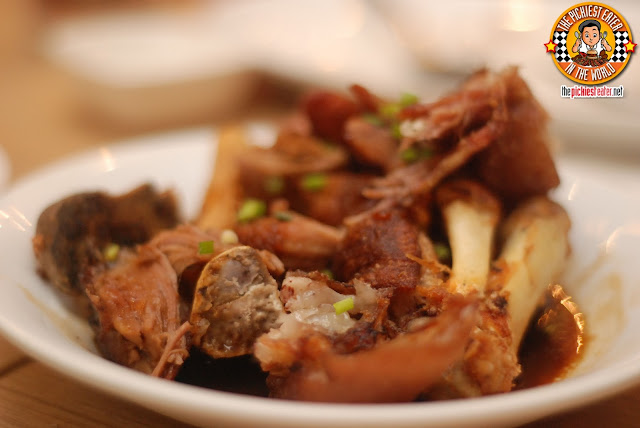 I think the idea behind the Crispy Pata Tim (P325/P585/P1,055) was pure genius. The crispy pork hock laying in a pool of lightly sweet and fragrant sauce was very enjoyable. The tendency with the deep frying of pork is that it can easily become dry, and this one was leaning towards that, but benefited from the sauce. 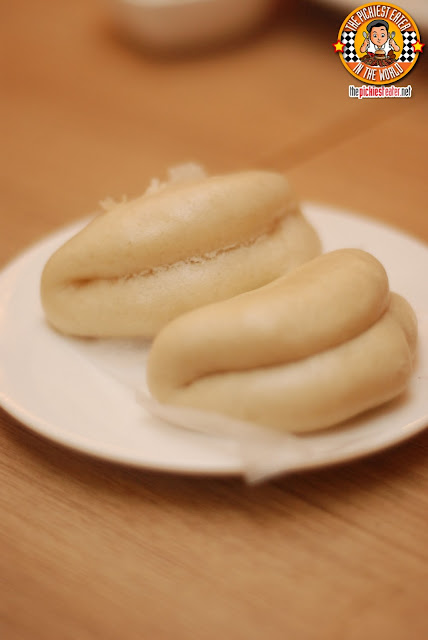 The mantao buns that it came with, however, was dry and tasteless. I suggest you eat it with rice instead. 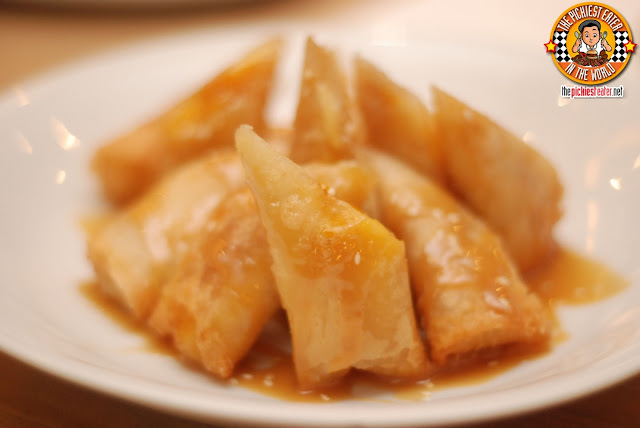 Off the top of my head, there are two Pinoy desserts whose temptation I am powerless against. One of them is Turon. So what happens when you make that a Turon of Mango and Quezong Puti (P125/P230/P440)? Those were darn near irresistible. 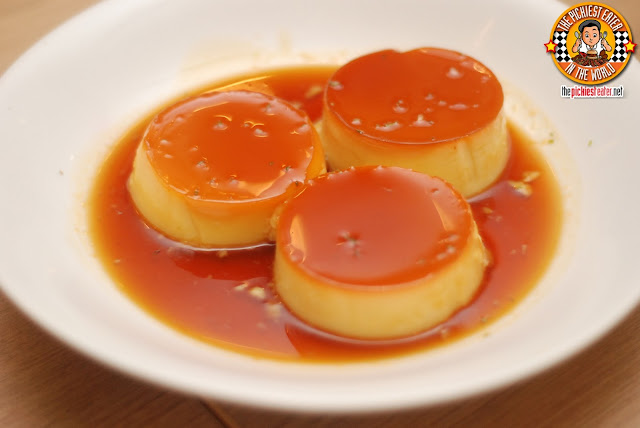 The final dish brought out that evening was the Gata Leche Flan (P85/P148/P225) , which coincidentally, is the second Pinoy dish that leaves me devoid of any sense of will power. This Leche Flan was pimped up by the use of coconut into its base, adding another punctuation of deliciously creamy flavor.

On the whole, my experience at Namnam was absolutely wonderful. With its eclectic choices and innovative takes on local dishes, Namnam easily ranks as one of my favorite Filipino restaurants. 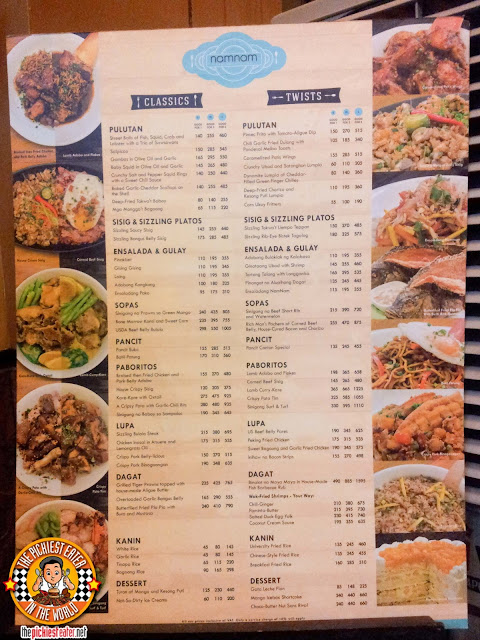 Posted by The Pickiest Eater at 10:11 PM

Email ThisBlogThis!Share to TwitterShare to FacebookShare to Pinterest
Labels: Filipino, Greenbelt, Makati, Namnam Comfort Filipino Restaurant, Where to Eat at Greenbelt, Where to eat in Makati