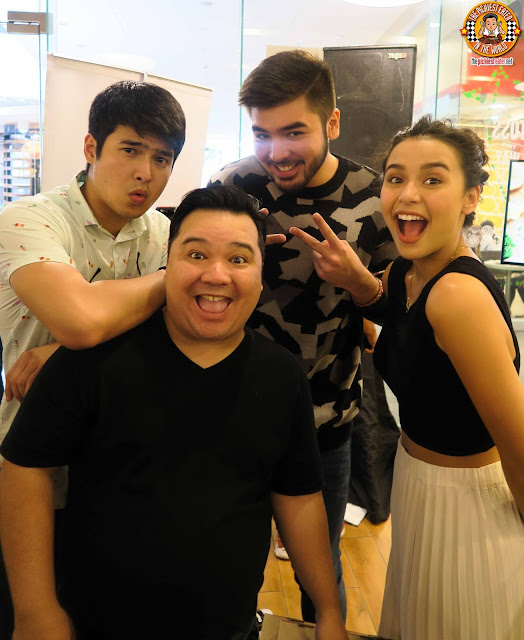 Soooo... Could I pass as a member of the Greenwich Barkada? Yeah, I'm probably way past the acceptable age limit, but I can be the cool Uncle that shares with them wild stories about my reckless youth. (Admittedly, unless crazy scrabble nights count, I don't have very many wild stories to share but I'm sure I could give them good advice on where to eat hehe). However, I'm game to join ANY gang that's willing to BACONIZE their pizzas!

Which is why I was couldn't say no to Greenwich's latest event, where the Barkada formally launched the newest Bacon Thins Pizza! 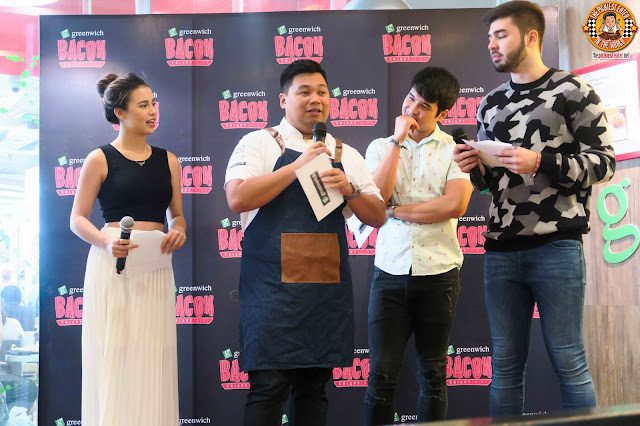 The Greenwich Barkada in attendance, led by Yassi Pressman, Jerome Ponce and Andre Paras, opened the event by welcoming the man who could be known as the "Bacon Maester" of the Philippines, should they ever give that title out.. Chef Ed Bugia. Chef Ed is one of my favorite Chefs here in the country, with his Breakfast and Pi and Backyard two of my go-to places for a sure fire kick ass meal.

After giving us a short background on Bacon, Chef Ed revealed that he whipped up a Bacon themed menu for us to enjoy! 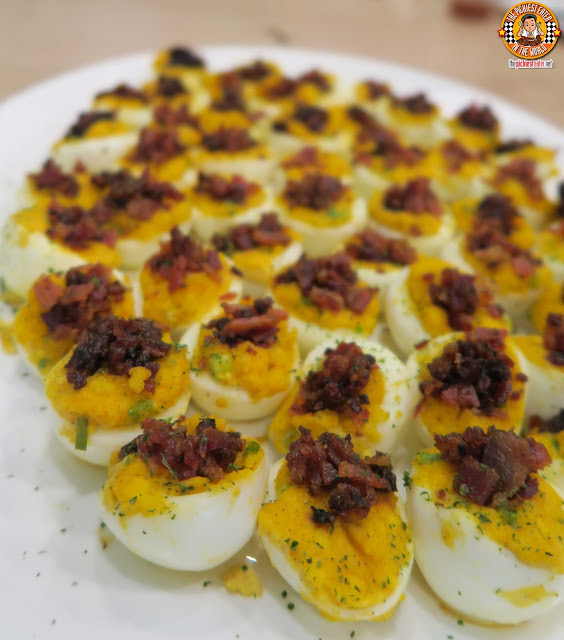 I'm not a fan of hard boiled eggs, but Chef Ed's Bacon Deviled Eggs made a believer out of me. 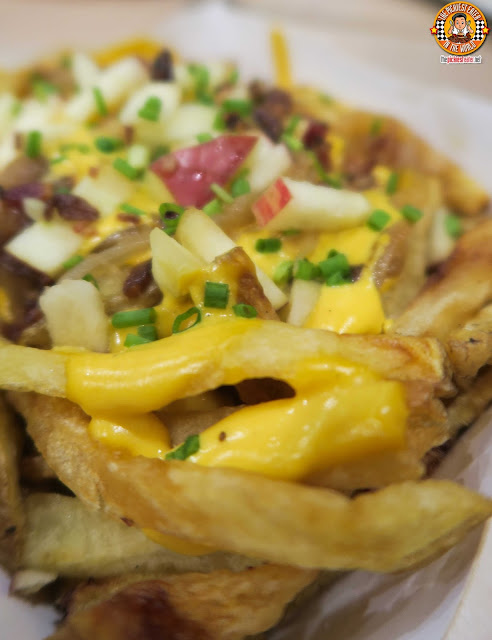 His Bacon Poutine was absolutely amazing. The golden fried potatoes were topped with Melted Cheese, Caramelized onions, Minced apples and Chives, whose individual flavors fused together wonderfully. I can only imagine how ever more awesome this dish would be if the fries were freshly cooked. 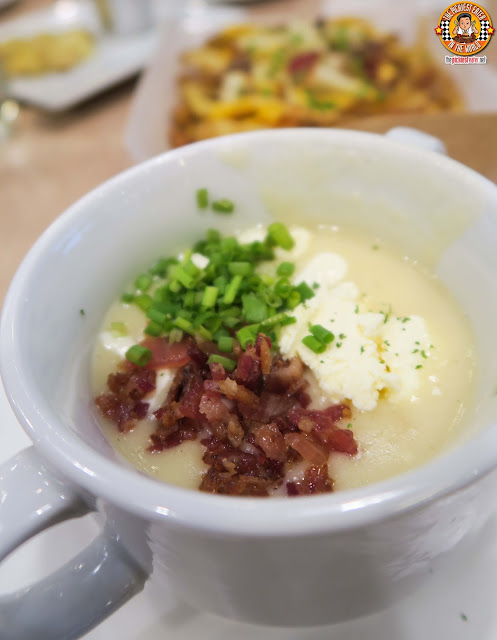 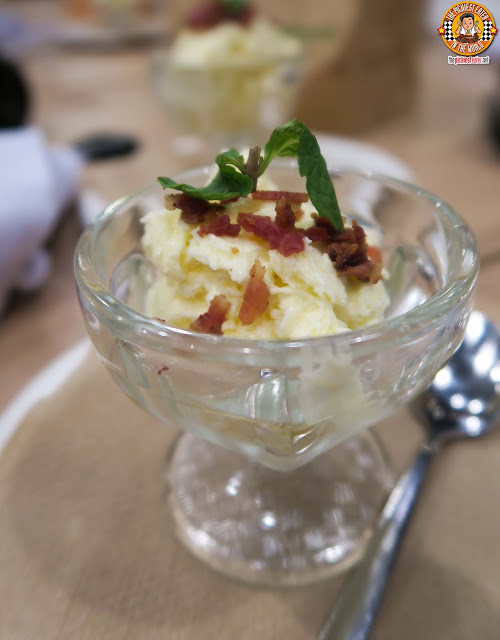 Chef Ed's knockout punch was the delectable Cream Cheese Bacon. The creamy ice cream had  a gentle tartness that was complimented by the lightly sweet and smokey notes of the caramelized bacon. Chef Ed's so good at creating chemistry between contrasting components, I'm surprised he didn't use his wiley skills on Yassi during the event (YAN ang professional!). 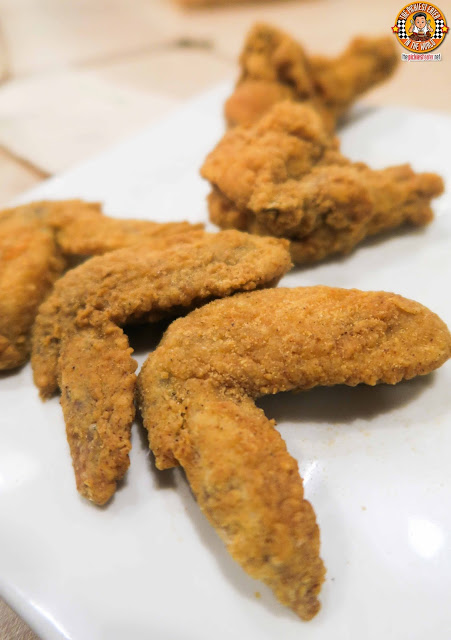 If you haven't tried Greenwich's Wacky Wings, I suggest you give it a go! It's got a nice crunchy exterior, while the meat itself remains juicy and flavorful! 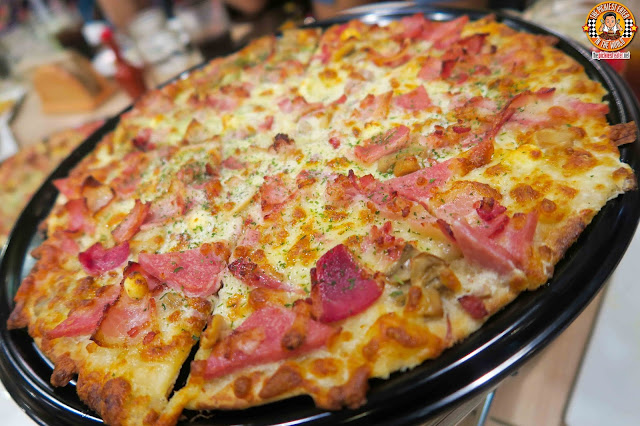 The Star of the show was of course, Greenwich's all new Bacon Thins! I've already mentioned in the past how much I LOVE greenwich's thin crust pizza, and the adding of the Bacon and white sauce just really put this over the top for me. 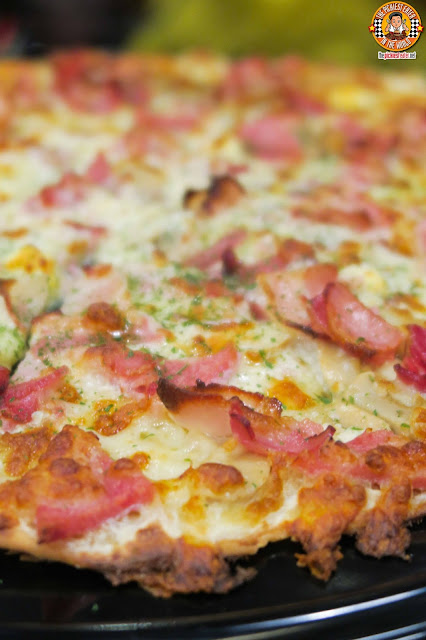 However this is much more than a mere Bacon and Cheese pizza. There are other components to this pizza that makes it yet another home run for Greenwich! I really enjoyed this, especially since they stayed away from Tomato sauce, which usually activates my acids.

I'd love to see Greenwich do a variation with a BBQ sauce though, for a more tangy flavor! Admit it.. Doesn't a BBQ Bacon Thin Crust Pizza sound all sorts of awesome?! 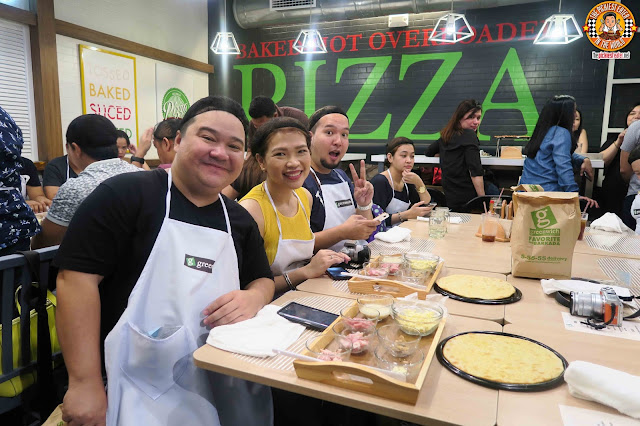 To add a little more fun to an already exciting event, we got a first hand experience in making our own Bacon Thins pizzas! 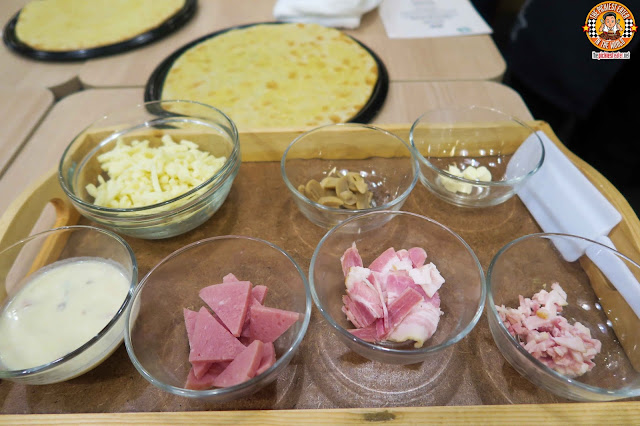 We were provided with all the necessary ingredients, such as the pre-baked Crust, Creamy mushroom sauce, Mushrooms, Bacon strips, Bacon Bits, Mozzarella Cheese,  Cream Cheese, (Yup, TWO different cuts of bacon and Cheese) and Ham! 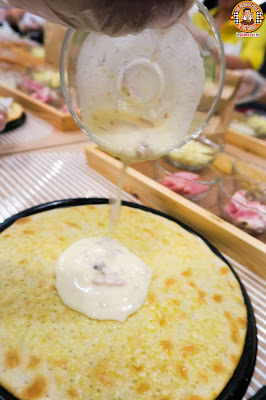 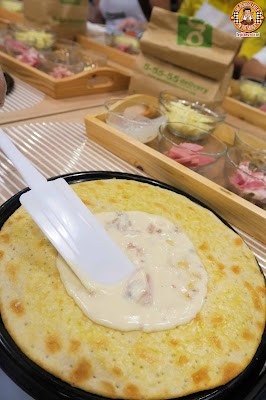 First we spread the sauce 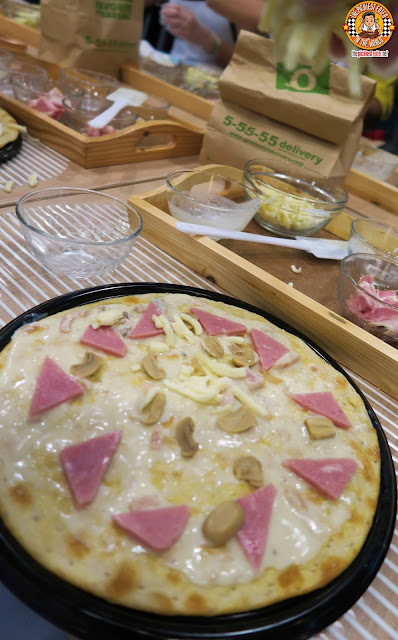 Spread some Ham around, then toss in some mushrooms.. 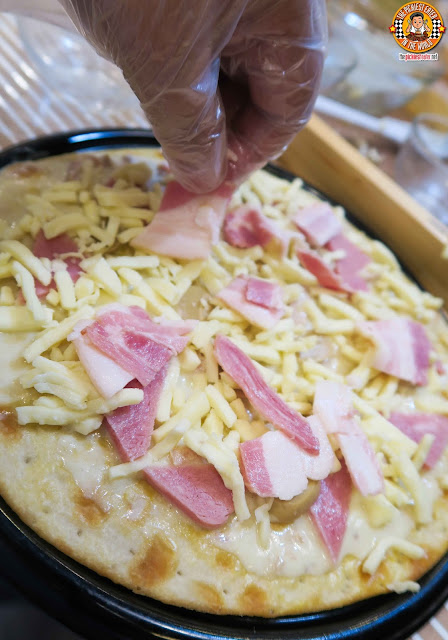 Sprinkle the Mozzarella Cheese, and then lay the Bacon Strips all around.. Make sure every slice gets bacon para walang away hehe 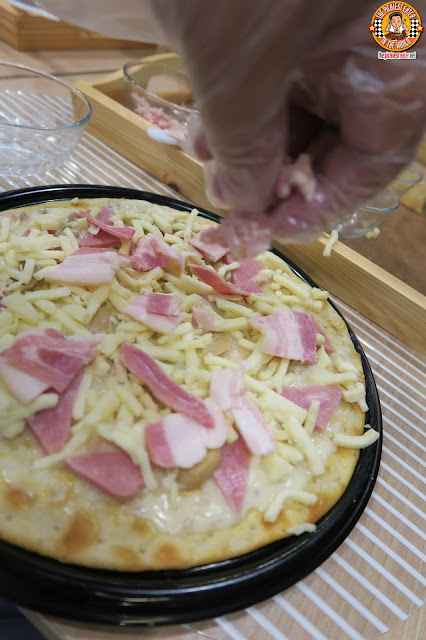 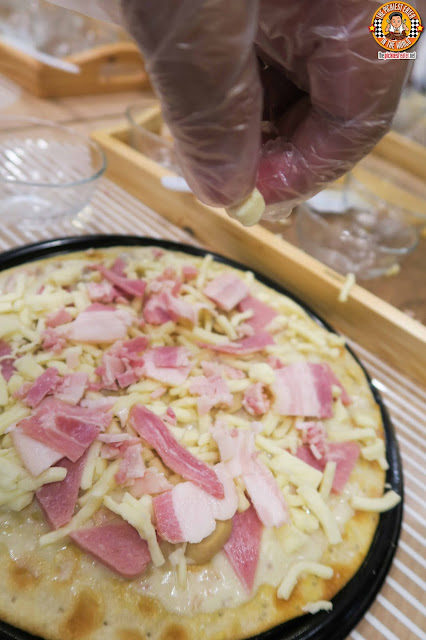 Then add the bits of cream cheese, and Viola! 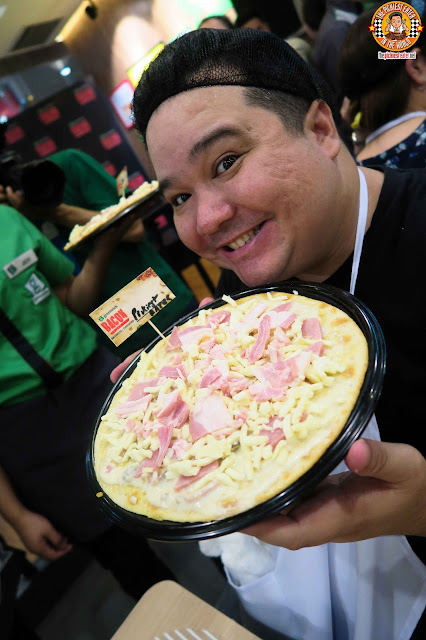 Your pie is ready for the oven! 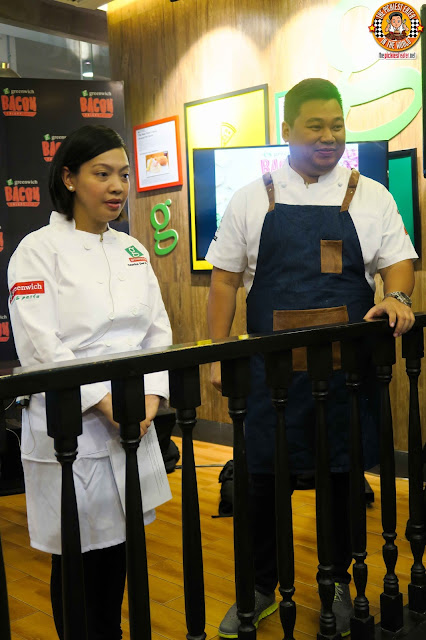 Chef Ed was joined by Greenwich's very own Chef Sara Del Puerto, in making sure that we were doing our pizzas the Greenwich way! 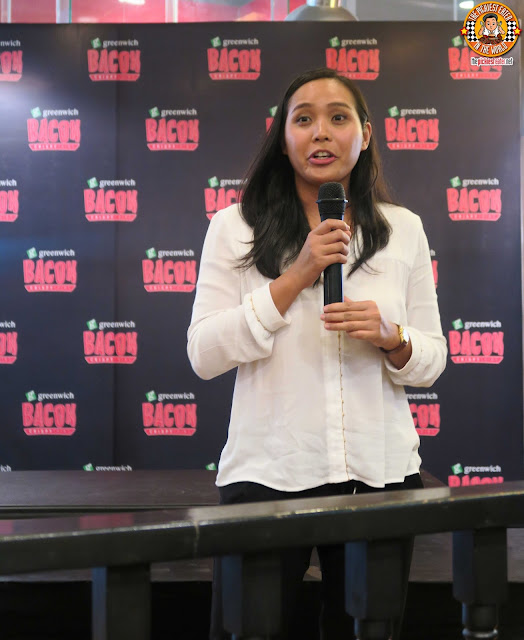 As we waited for our pizzas, Charisse Pabillore, Brand Manager of Greenwich, unveiled the newest commercial of Greenwich, featuring the Greenwich Barkada and the all new Bacon Thin Crust Pizza! 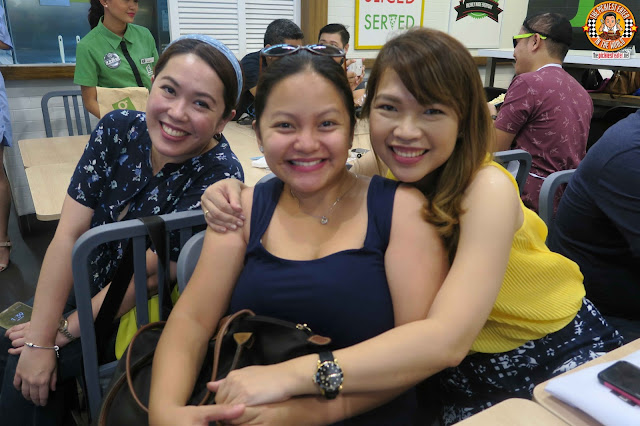 It was good vibes all around, as Rina was able to join us, and catch up with our friends, Animetric and Ask Me Whats! 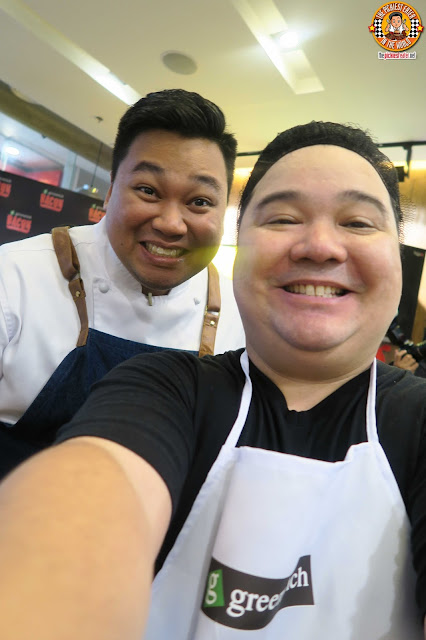 I've seen Chef Ed in the Kitchen before, as well as his TV spots and Live demos, but this is the first time I saw him host an event, and he did a masterful job! 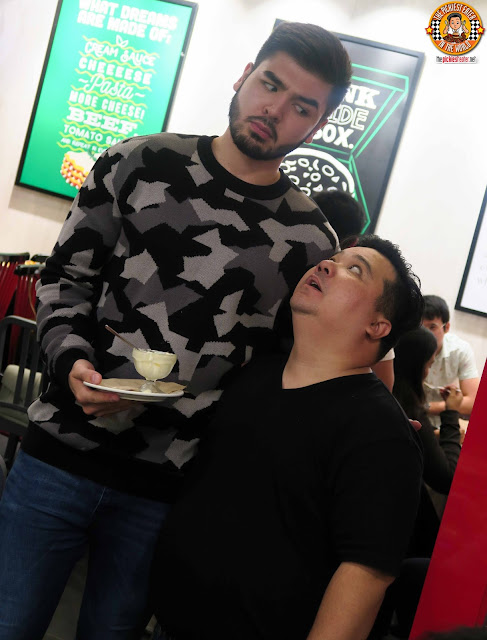 You might not notice it because I'm standing right beside him, but Andre Paras is an incredibly tall man. 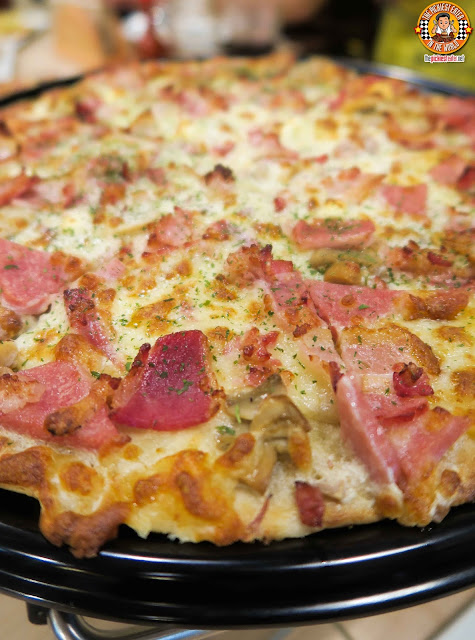 The Bacon Crispy Thins pizza will be sold in Greenwich branches nationwide at a starting price of P220 from July to September 30 or until supplies last. And because it’s National Bacon Lover’s Day on August 20, watch out for exciting activities from Greenwich.

Grab your barkada and experience the #BaconEffect at your favorite Greenwich pizzeria, or call Greenwich delivery at #5-55-55 and get that goodness delivered straight to your door. Stay updated with the latest from Greenwich on Facebook and @greenwichpizza on Twitter and Instagram.