I have to admit it. I didn’t know Chef Aaron Craze at all. Don’t blame me. Everyone knows I don’t cook.  And our television is only tuned in if not on Disney Jr. , on DVD mode for Sesame Street. (Ah yes the life of a toddler’s Mom). I know more versions of the song ABC than recipes. But that doesn’t mean I don’t want to be exposed to the culinary world. I do find it interesting. Especially the tasting part.

When we were invited to cover a media day for a new show on the Asian Food Channel called Rude Boy at a restaurant in Makati Shangri-la called Red (so classy!), I was expecting the celebrity chef to be... well,... somewhat on the “rude” side. Leave it to me to take things literally. I had no idea about his show or about him per se. 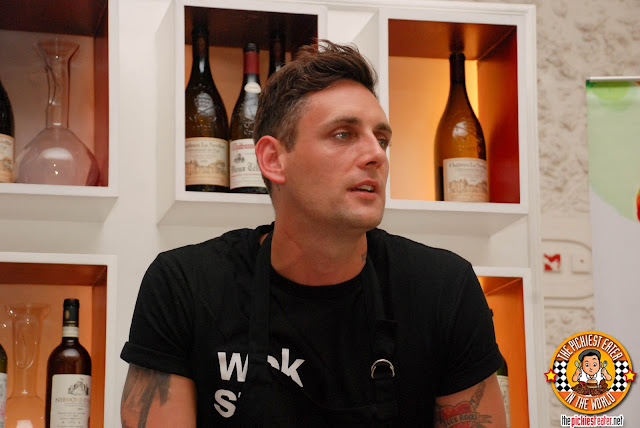 So in comes a tall British guy (I’m Filipina so all other foreigners who are not Asian look pretty much tall to me), with tattoos on his arms. Yep, he does have that bad boy image. But once he started talking and telling jokes, I knew this guy wasn’t so “bad” after all! 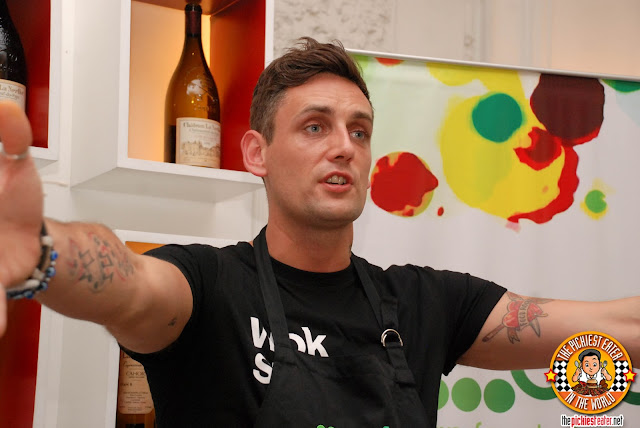 Chef Aaron actually had a simple life then that was actually headed downhill due to dropping out of school at 15 years old, and thus only able to get hired at low-paying jobs. But his luck turned around a complete 360 when his wife registered him (and WON) a reality cooking show called “Jaime’s Chef” by world-renowned celebrity chef, Jaime Oliver. And so long story short, from a simple factory worker /  gardener at a cementery, Aaron Craze, deemed Chef Jaime Oliver’s Successor, now has his own cooking show called Rude Boy, and came here in the Philippines as a celebrity Chef himself for a cook tour with the Asian Food Channel called Aaron Craze: Rude Boy Cooks in Manila! 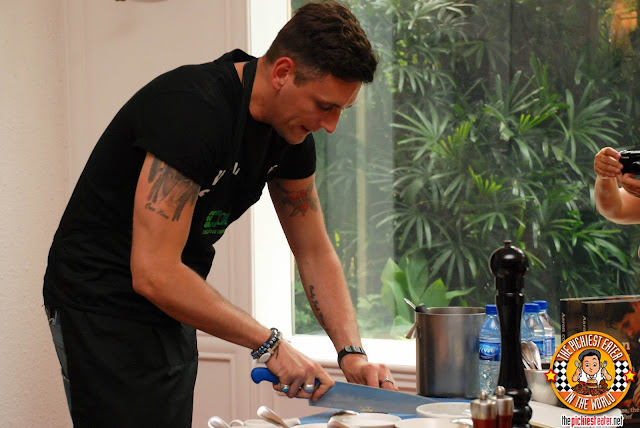 I was fortunate to be one of the lucky ones to meet Chef Aaron in person during a late lunch event at Red in Makati Shangri-La last June 7. He showed us that though he has already reached fame, he’s still really down-to-earth and was gracious enough to share his lessons in life, as well as 3 of his super scrumptious recipes that we were fortunate to try! 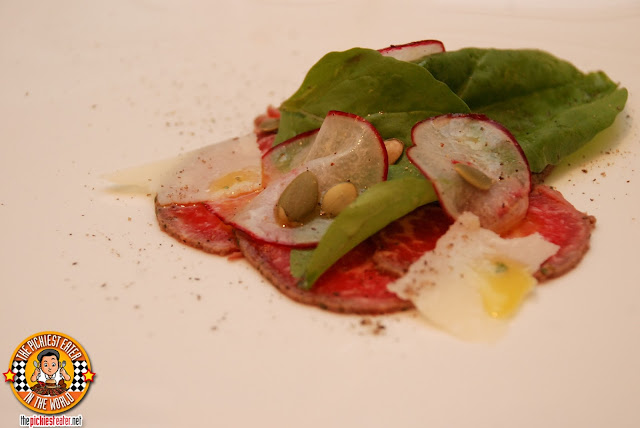 We started off with the Beef Carpacio. He didn’t make this one in front of us and it was already ready to be served. I guess they foresaw that we would be starving already haha! Okay, personally? I wasn’t such a fan of this one. My taste buds were looking for more salt. Then again, I love salty. So this may have been just right. But not for me who loves salty food. 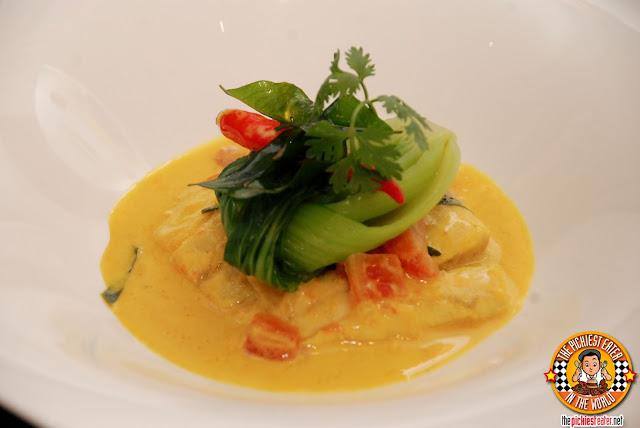 Next was the Poached Local Sea Bass and this was looove! If you love coconut + a little bit of spice, then you will love this as much as I did! It’s something that I would definitely eat with a bucket of rice! The sauce alone is a winner already! This was the dish that he cooked in front of us. For the recipe of this delicious dish, click here. ;-) 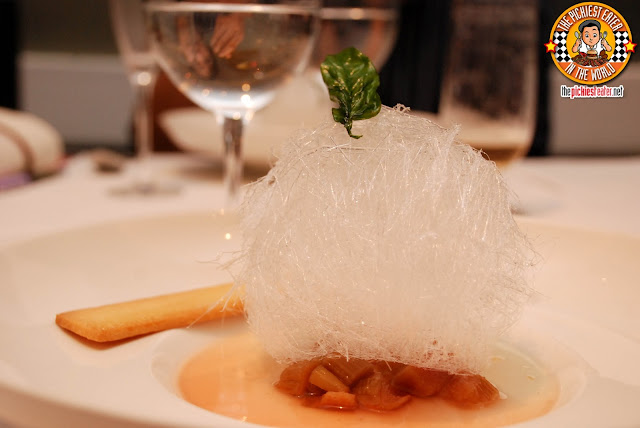 Next comes dessert. And oh boy was it a fascinating-looking one! This Thai Basil Panna Cotta with Scottish Shortbread Biscuit was really a sight to behold. I mean just look at that balled up sugar flossy thing! First of all,  panna cotta was very light. It was refreshing actually. And I also loved the Scottish shortbread biscuit! It was soft to bite and doesn’t crumble. I loved the taste too! Not too sweet! The sugar snow thing may look pretty but it kind of hurts my tongue. They’re like a thicker (and classy) cotton candy. But other than that, it was good!

Okay so back to his show. The Rude Boy Food Show is interesting because he puts his own twist on the usual street food.  I’m sure everyone here in the Philippines will find the concept interesting. What I also love about it is how laid back it looks. He just wears jeans and a button shirt. In one quick episode I even saw him wearing just a comfortable t-shirt haha! Not even an apron. He doesn’t look like a chef at all. He might as well hold a can of beer in his hand while cooking and it would still look alright hahaha! It makes me feel like if he can cook, I can cook! It has 13 episodes of 30 minutes each and is aired every Thursday at 11PM until June 27 in AFC. 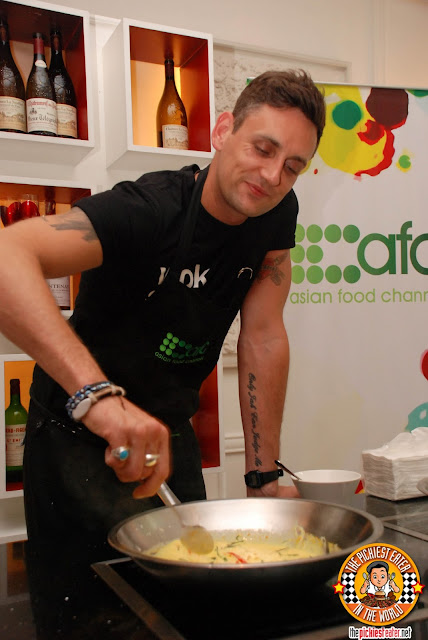 I find it interesting to know that there’s a famous chef that didn’t have a love affair with cooking at a young age. Made me think there’s a tiny possibility that I could be a famous chef someday!!!....... Nah. I still don’t think that will happen hahaha!


More photos from the event: 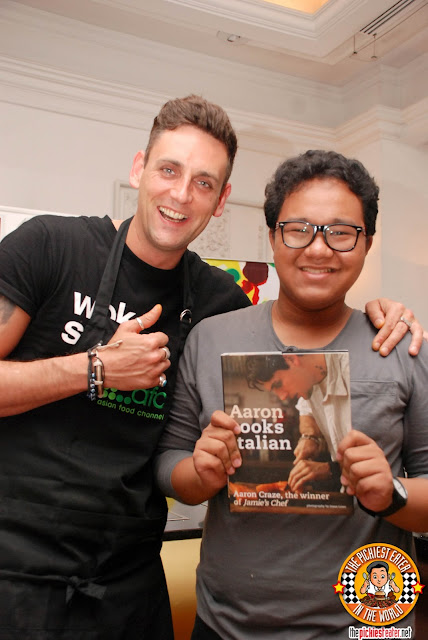