THE LUZVIMINDA FOOD FESTIVAL AT THE F1 HOTEL MANILA 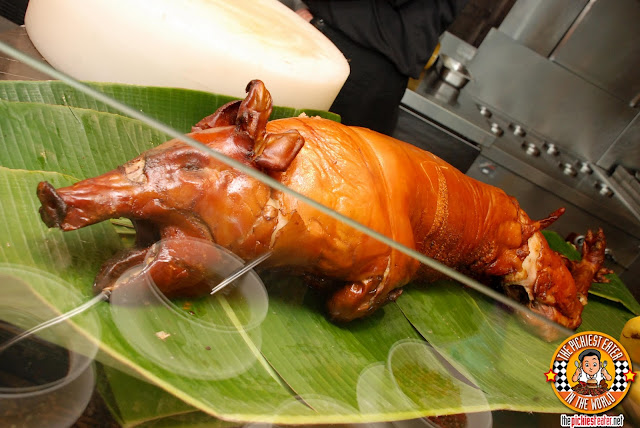 You don't have to be a comic geek to know that the success of the movie "The Avengers", which earned a staggering US$1.5 Billion in its worldwide box office, can be attributed to the public's anticipation of seeing Earth's Mightiest Heroes assembled on the big screen for the first time. Even a year after its release, I still sometimes find myself going on to Youtube just to watch the scene where Dr. Banner casually strolls toward the Huge alien transporter/creature that is chasing Iron Man, and nonchalantly tells Captain America, "That's my secret Cap.. I'm always angry", then transforms into the Hulk, and punches the creature square on the nose, causing it to flip over, just in time for Iron Man to blast it to smithereens. 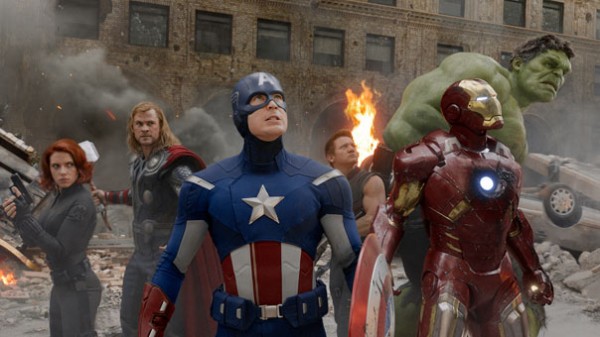 To this very day, the scene that followed, where they are all gathered around in a circle, with the camera panning around them still gives me the chills. 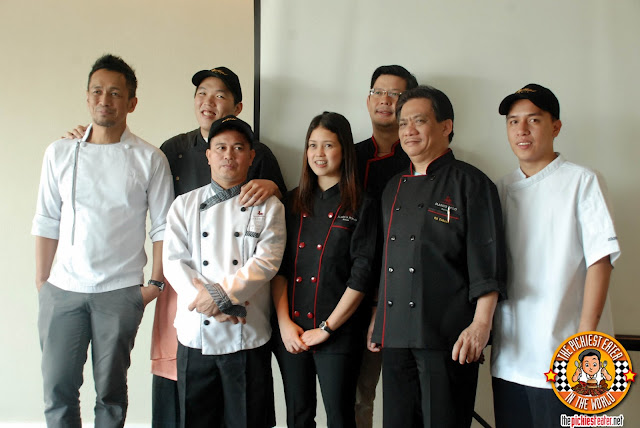 Though they're aren't superheroes, seeing the collection of talented Filipino Chefs from across the country that F1 Hotel Manila assembled for their groundbreaking "LUZVIMINDA: Filipino Festival of Flavors" stand before me, gave a food lover such as myself tingles down my spine.

I knew that this moment, was something very special, and I was excited for what was to come. 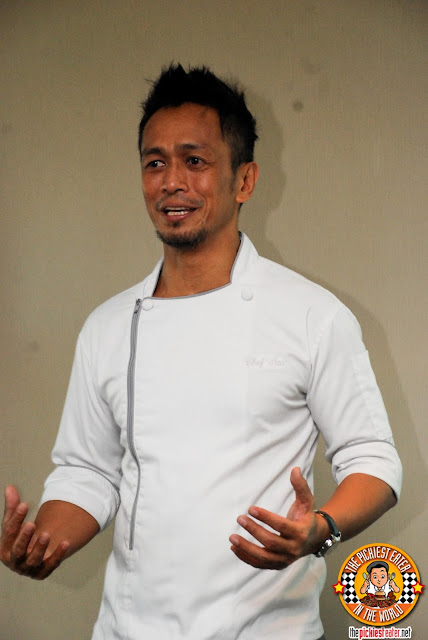 The man who brought them all together, was none other than F1 Hotel Manila's Executive Chef, Sau Del Rosario. Chef Sau's work speaks for itself. Has worked in Singapore, France, and China, as well as for prestigious hotels in the Philippines, such as Peninsula, Shangrila, Westin and Hyatt.
Joining him in representing the Luzon contingent, was Chef Martin Jickain (Who didn't make it to the early meet-up with the bloggers, but joined us later on for a cooking demo.. more on the in another post). The Model-Turned-Chef (I shall call myself Model-Turned-Blogger from now on) owner of Station Juan Cafe in Boracay.

The brilliance of Chef Sau's selection of Chefs, is apparent in the diversity of their ages. Representing the Visayas are two young Chefs, who are unafraid to give modern spins to classic Visayan dishes. 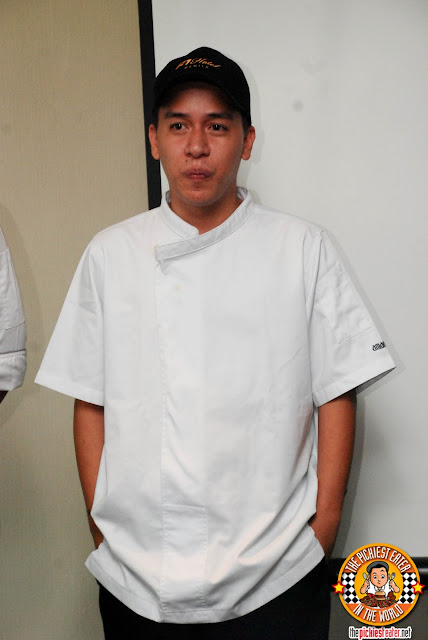 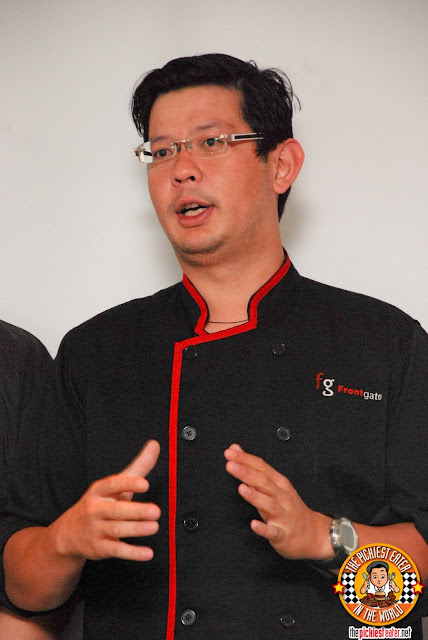 And the man who handles the reins of dining hotspot, "Frontgate", Chef Paul Sidney Uy.

I haven't been to either places yet, but I'm sure my lovely friend, The Babe For Food will take me as soon as I visit her in Cebu (hehe).

Both Chef Karl and Chef Paul, let their youthful exuberance translate into gastronomic creativity in the Kitchen. The two Cebuano chefs showed an impressive mastery of classic dishes, that belied their young ages. 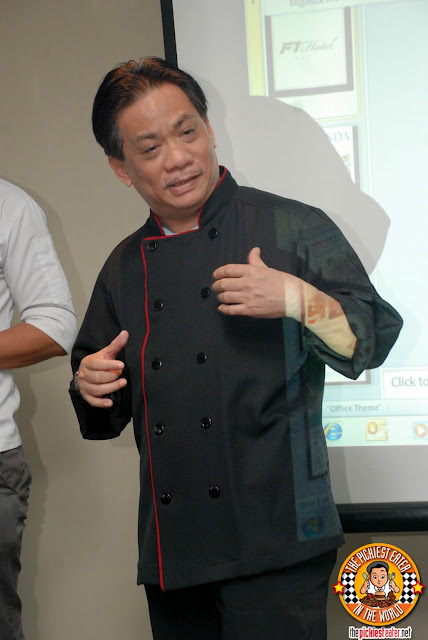 After bringing in the younger Chefs in Chef Martin, Chef Karl, and Chef Paul, Chef Sau wanted to bring an elder statesman to represent the Mindanao region. And Chef Sau was very clear.. You cannot talk about food from Mindanao, particularly Davao, without bringing up the name of Ed Tuazon, the multi-awarded Chef of Marco Polo Hotel Davao.

Even if Chef Sau himself was the sole chef involved, the thought of the LuzViMinda Festival is already an exciting event. But when you add the eclectic mix of chefs to the line up, it adds a definitive stamp of authenticity to the dishes from all around the country that is part of F1 Hotel Manila's buffet.

The LuzViMinda Festival is happening every lunch and Dinner from June 1 to 30, at the All Day Dining restaurant, and reasonably priced at P1,399++ per person. 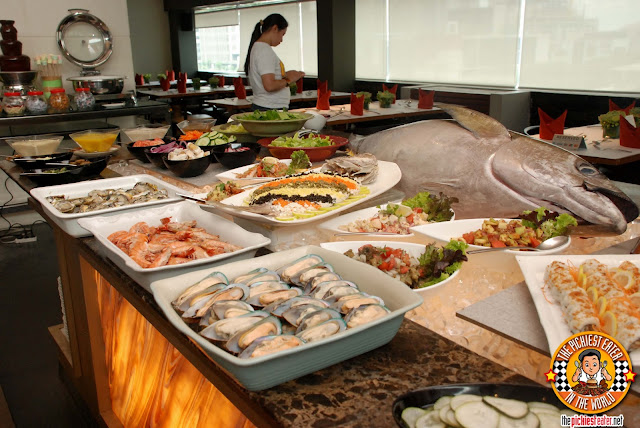 The first thing that caught Baby Rain's attention was the Seafood Station. She wasn't interested in the fresh oysters, or sushi or shrimp. 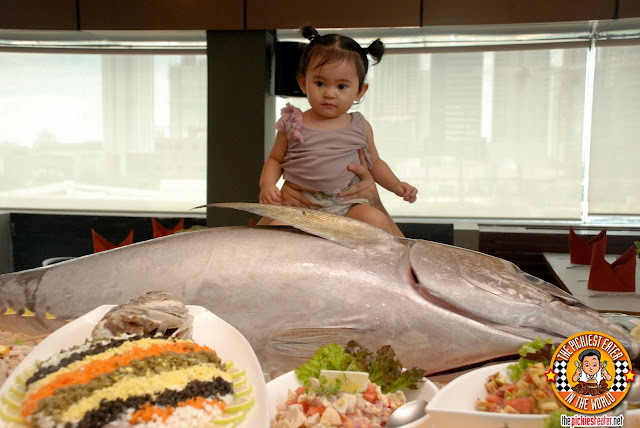 She took one look at the massive fish spread out on the table, and couldn't resist letting out a loud, "Woooooooooow!"

Some of the favorites of Rina and I were... 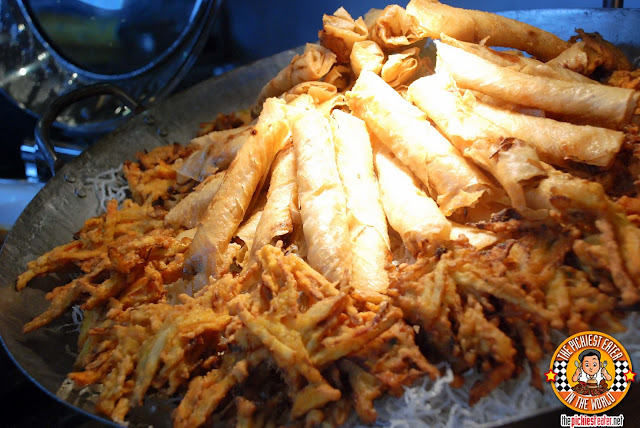 The Lumbiang Ubod, had a beautiful crunch to it, and it was only halfway into it that I realized that it was ubod.. Not Lumpia Shanghai (If you know how much a carnivore I am, then you know that's a compliment). 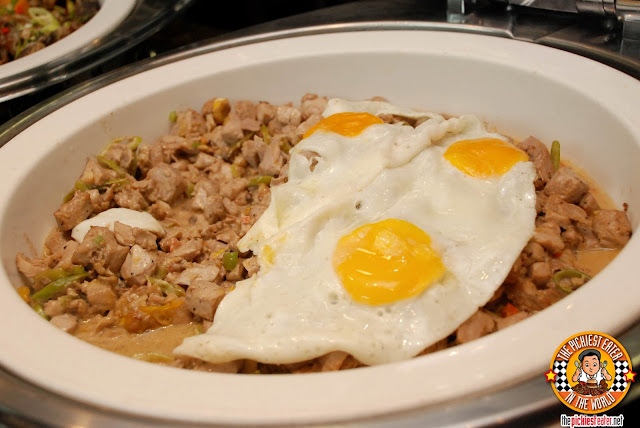 Rina enjoyed the unique take on Sisig, as the LuzViMinda version offered a Tuna Sisig, topped off with a fried egg. Delicious play on flavors, that offered a nice touch of spice. 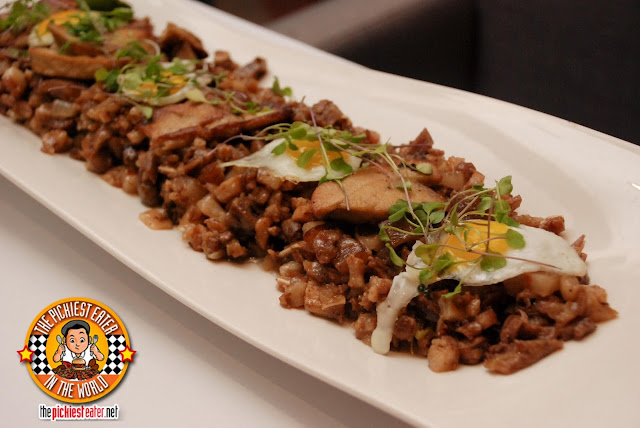 Chef Sau also has another sisig creation that he included in the lineup of dishes in the LuzViMinda Festival. At first glance, it looks like your average ordinary sisig, with smaller fried eggs on it, which incidentally, turned out to be quail eggs. 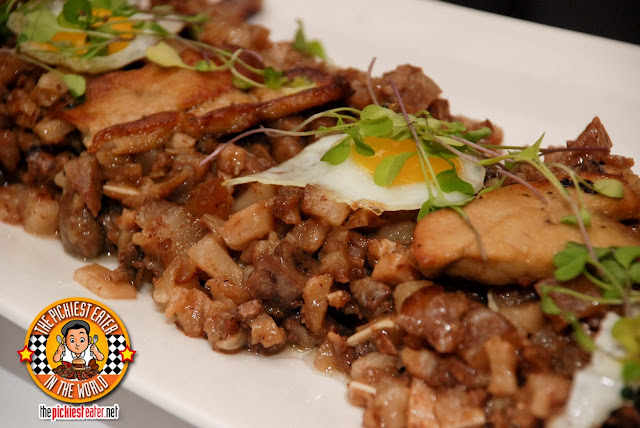 That alone tipped me off. There was no way this was plain Kapampangan sisig. There was more to this than meats the eye. I took half a spoonful and placed it into my mouth, and I got the savory flavor of the pork meat, but at the same time, there was something a little bit more to it. The fatty parts, which I assumed to be pork fat, had a silky richness to it. No doubt it was a cholesterol bomb (Cuz that's what sisig is), but a delicious one at that. The delicate heat from the chilis helped balance the richness out.

It was only after my first spoonful that the true identity of the sisig was revealed to me by another blogger. This really was no ordinary sisig, my friends.

This was Foie Gras Sisig.

And in case you were wondering, YES, it was FANTASTIC. 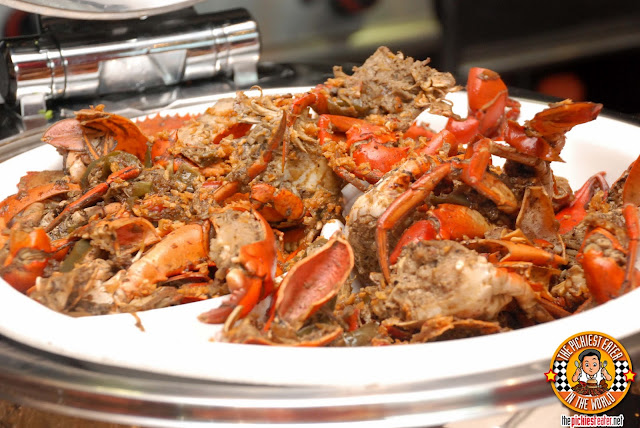 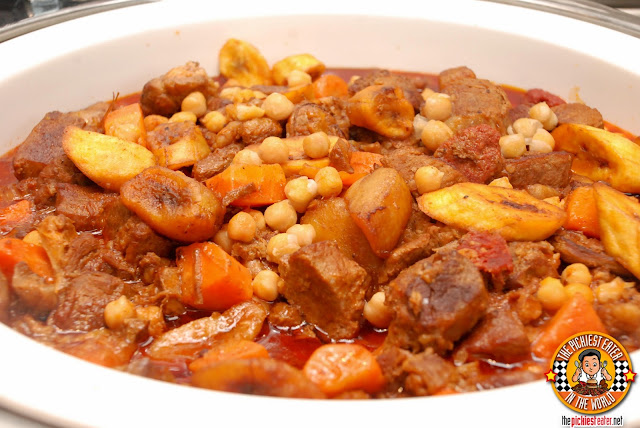 Though it was Tomato Based, I thoroughly enjoyed the Pocherong Baka. I loved the mixture of the acid on the sauce, coupled with the sweetness of the banana on the tenderness of the Ribeye meat. Yes, they used Ribeye. On Pochero. Awesome. 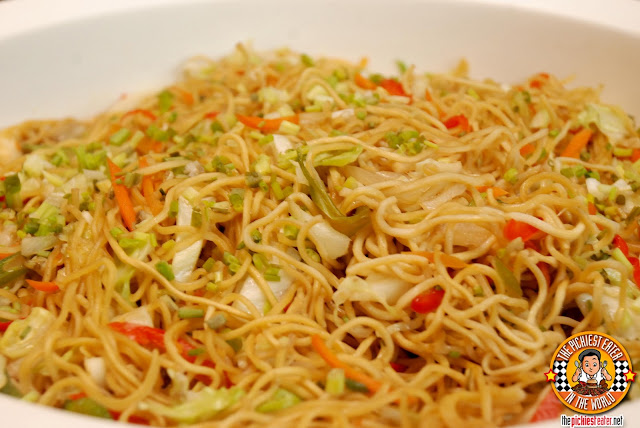 I also enjoyed the Pancit Canton, which was very hearty, and had an innate meaty flavor to it. I don't know about you, but for some reason I love dry pancit more than the type with a lush sauce.

But there were two entrees that stood out the most for me.. 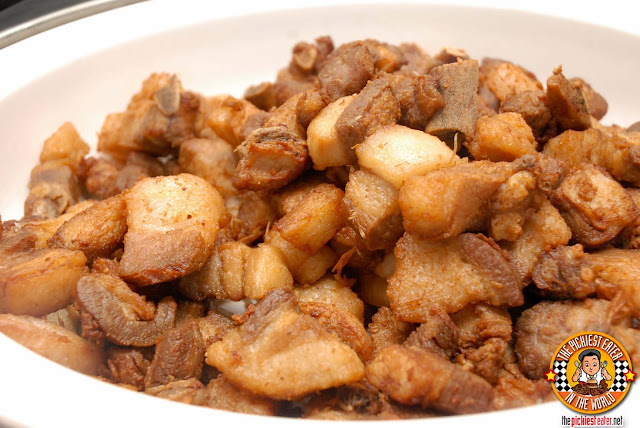 Those Cebuano boys really worked their magic on the Pork Adobo, because this dish, because it was phenomenal. This is easily among the best I've ever had in my entire life. They cook the cuts of pork (which by the way, is loaded with yummy fat), the traditional way, and let it marinade in its own sauce overnight. The meat is then fried in its own oil, and is given a lightly crisp caramelization on the edges. 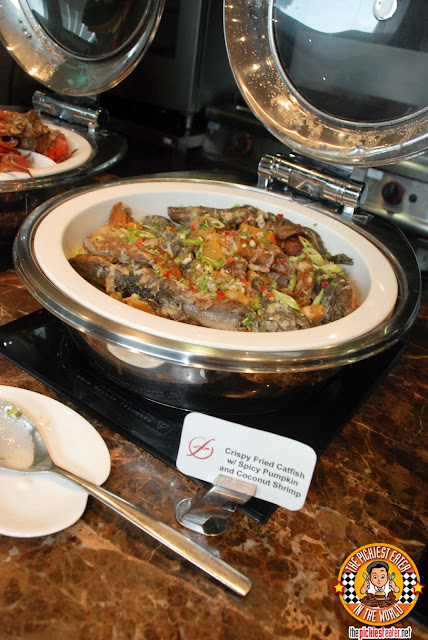 Another dish that blew my mind, was the Crispy Catfish with Spicy Pumpkin and Coconut Shrimp. The combination of coconut milk (Which I love), Catfish (Which I love), and pumpkin (one of the few veggies I eat.. wait.. Pumpkin IS a veggie, right?) was perfect. It had the perfect amount of heat.. the amount that tickles your taste buds and makes you want some more.

There were a few more entrees, such as the Kalderatang Kambing sa Langka and the Bagaybay in Alavar sauce that caught the attention of my blogger friends, but was a tad bit too exotic for me ("Pickiest Eater", remember?).

So that was a pretty amazing spread, huh? But we're not done just yet. 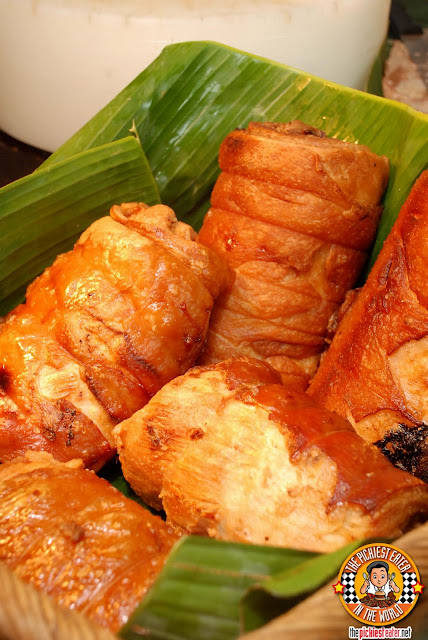 There was a basket of Bagnet just calling out my name. 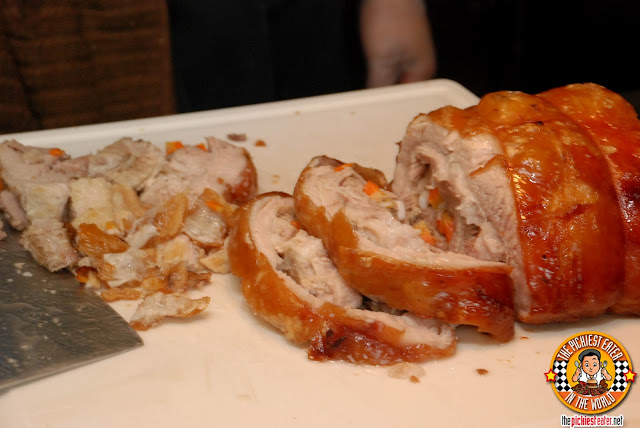 Watching them slice it, was a delight to all the senses. You hear the crack of the crispy skin as the knife goes through it. You see the juiciness of the pork and smell the aroma of the infusion of herbs inside. And I don't think I need to tell you it tasted sublime. 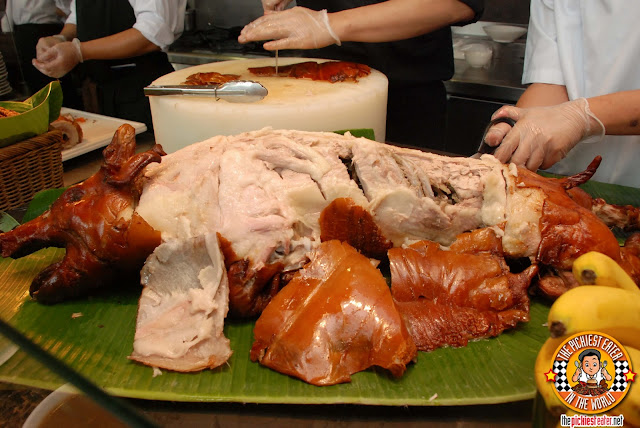 The highlight of every Filipino Feast, is undoubtedly the Lechon. Chef Sau told us that the Lechon that he used, is organic, and was only fed arugula throughout its existence. I was only slightly embarrassed that in its short life, this pig had eaten more lettuce than I have in my entire lifetime.

What I noticed about the pig being "Organic", was that it was a tad bit leaner than the normal lechon, however it was a refreshing change from the usual excessively fatty fare that we're used to.. and you STILL get the gorgeous crispy skin, which is everyone's favorite part anyway. 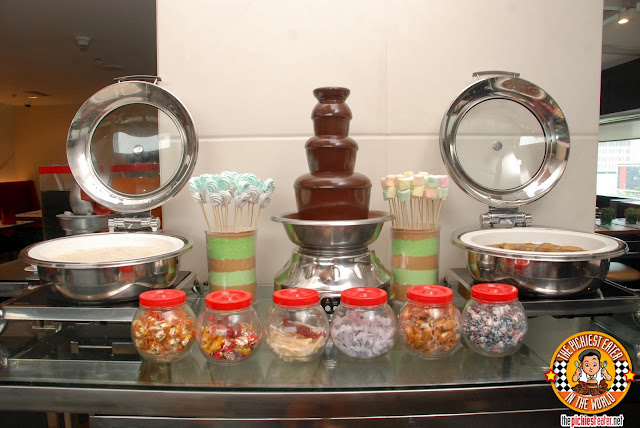 You can cap off your incredible feast at the Dessert Station, which offers a nice Chocolate fountain with marshmallows, and a wide assortment of Filipino dessert favorites, such as "Ginataang Mais" and "Saba con Hielo". 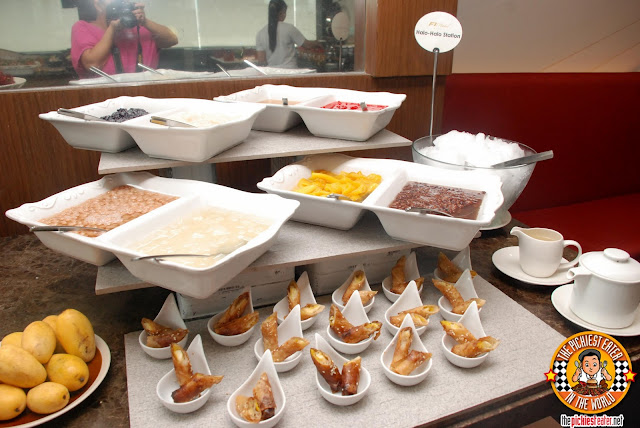 A Halo-Halo Station and Turon 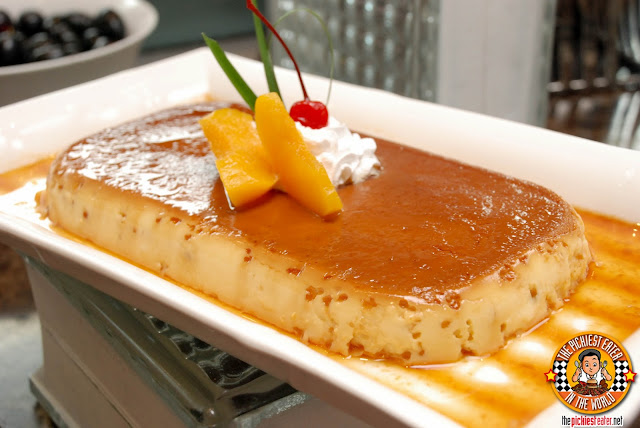 The ever classic Leche Flan 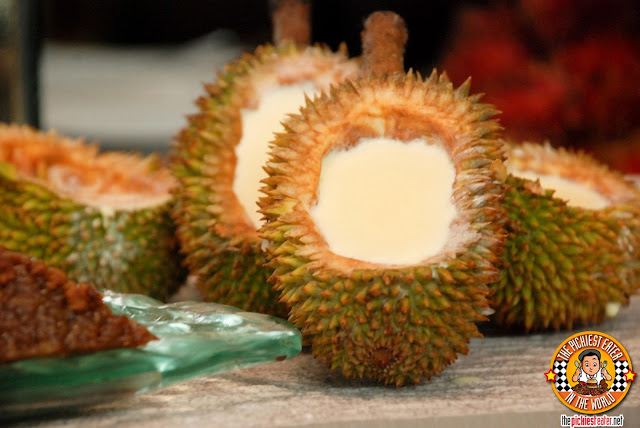 Chef Ed's Durian Panna Cotta got everyone's attention. Though I honestly never really appreciated the fruit itself, the technique involved in the presentation was impressive. 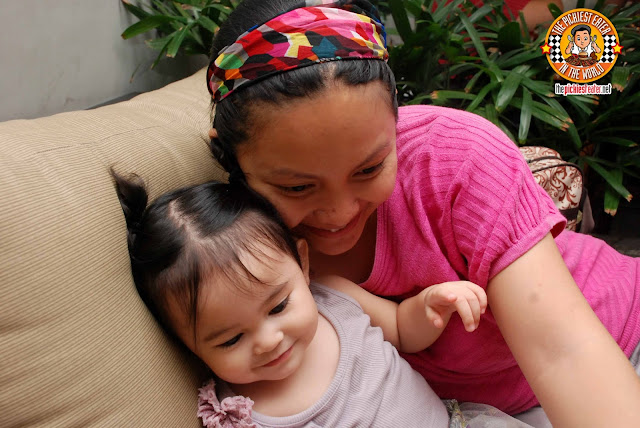 Rina and Rain were so full, they got a bit too cozy at our booth 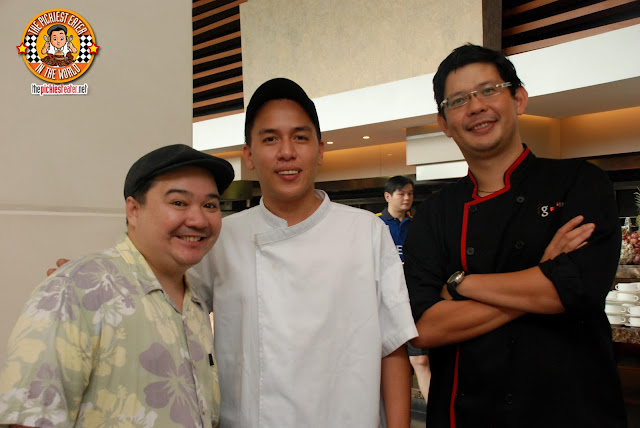 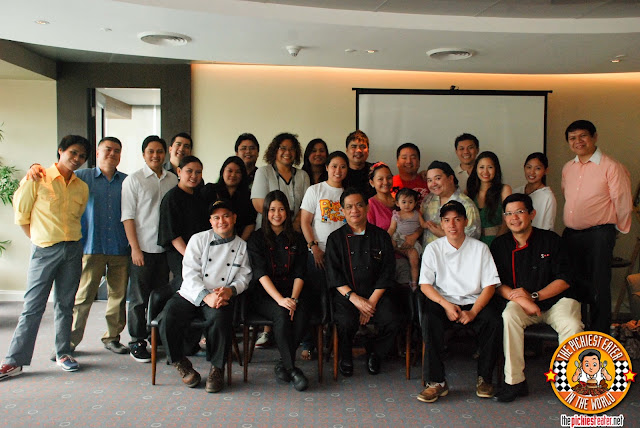 This was just the first part of what was going to be an epic Staycation weekend at F1 Hotel Manila. After declaring that I was going to end my meal with some dessert, I came back to my plate with a pile of Adobo and Catfish. After taking a glance of plate whose cup spilleth over, one of the chefs asked me how would I possibly still be hungry for dinner, as they were preparing a BBQ Feast for later that evening

I couldn't help but take a cue from my dear friend, Bruce Banner, and tell him, "That's my secret, Chef. I'm Always hungry.". 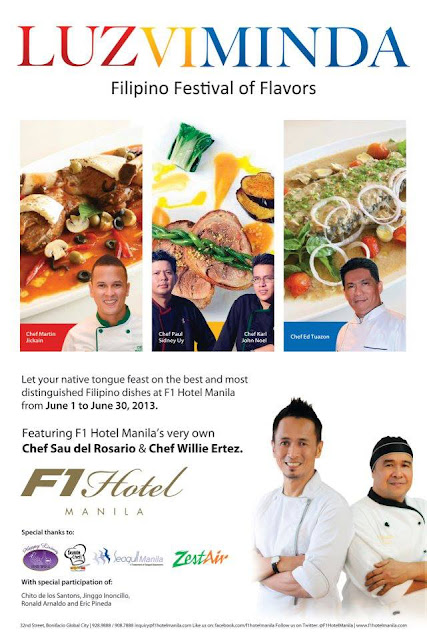