I don't know if you know this, but I used to work in a Post Production House in Makati. I started at around 2007 or so, and our biggest clientele came from advertising. Whenever there was some sort of event or function.. Or if you wanted to take a client out, one of the go-to places to do so was Il Ponticello.

Truthfully, I know the place is an institution, but I don't have any fond memories there.. Well. Let me correct that - I have no memories of the place whatsoever. I know they served Italian cuisine classics, but I never tried any of the dishes, because I thought it was more of a bar than a restaurant.. and I don't drink, so all my visits were always very brief.

Cut to 2014. Il Ponticello is back, and it's better than ever. With a jazzed up Modern Italian Menu that will definitely captivate your taste buds, It was time for me to make up for lost time and discover what made Il Ponticello the iconic hot spot that it is. 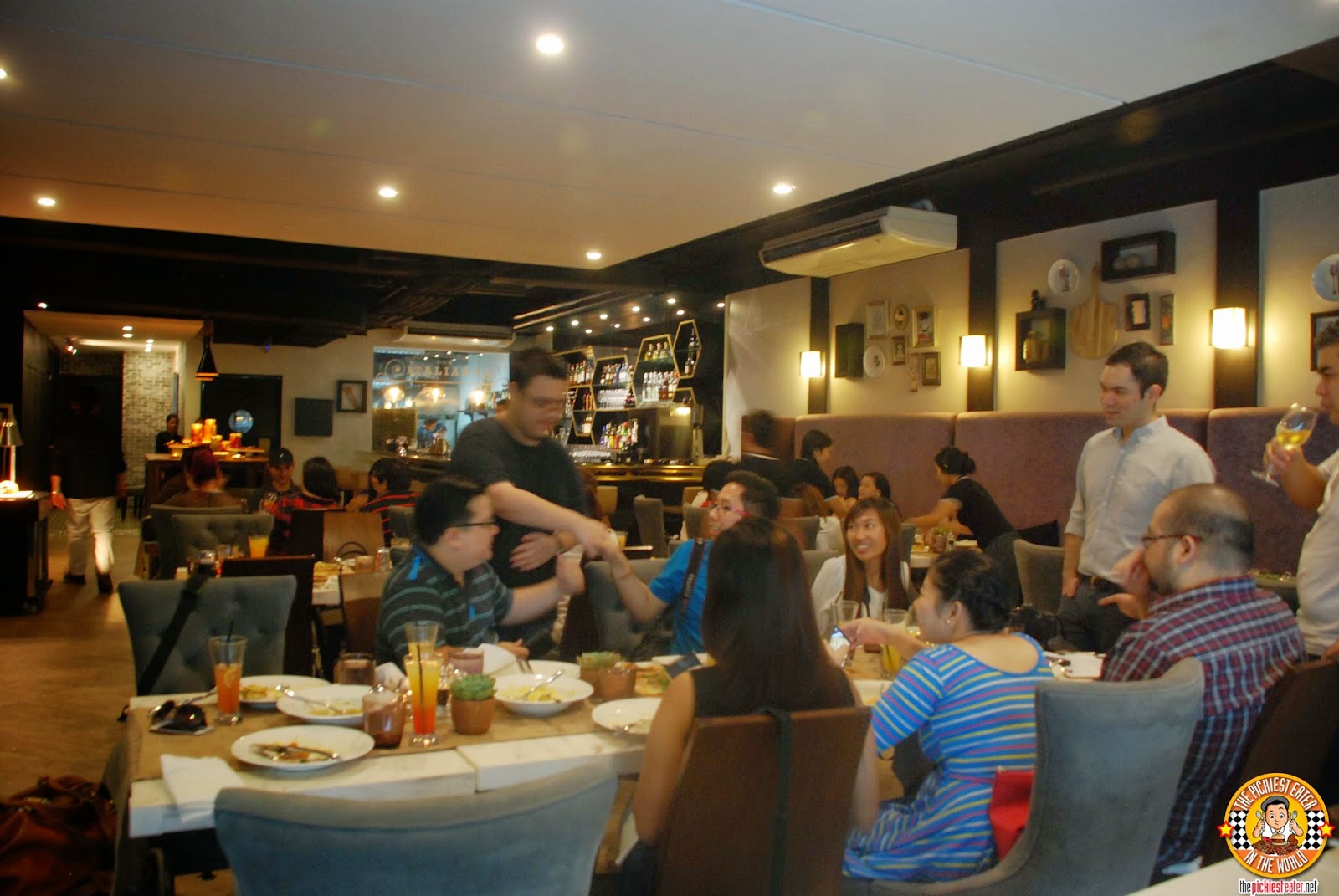 Like I said, I don't have very much memories of the Il Ponticello of the old. I just remember how to me, the place looked kinda dated. The new improved "Ponti" has a more modern, sexier vibe, that is conducive to both having a meal and/or enjoying a few drinks. 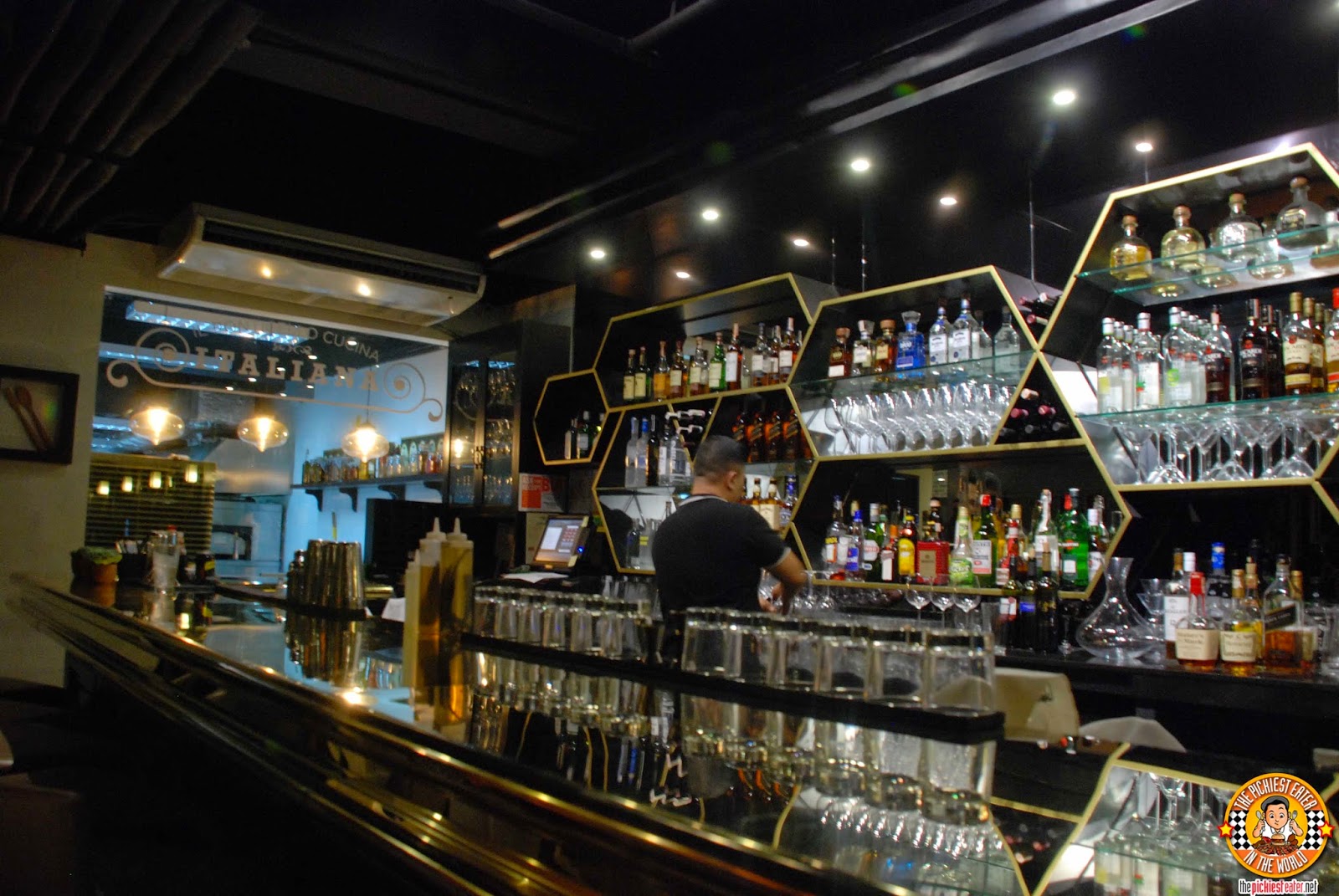 Or in the case of some other bloggers.. A LOT of drinks
(you know who you are hehe) 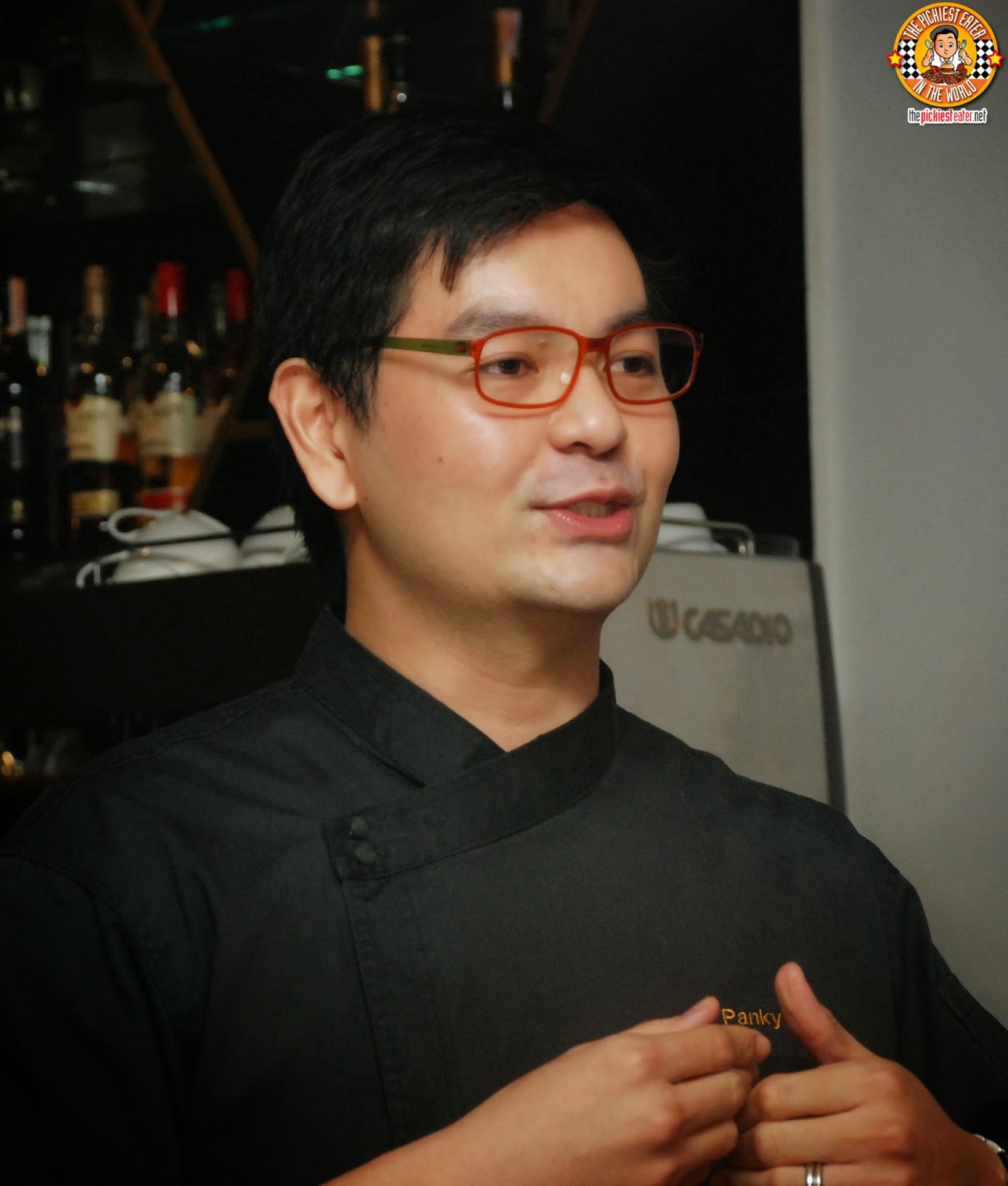 One of the driving forces behind the renaissance of Il Ponticello is Executive Chef Panky Lopez. Chef Panky's unwavering mantra of using only the freshest ingredients reflects on the high standard of food that helped Il Ponticello earn its name in the first place. 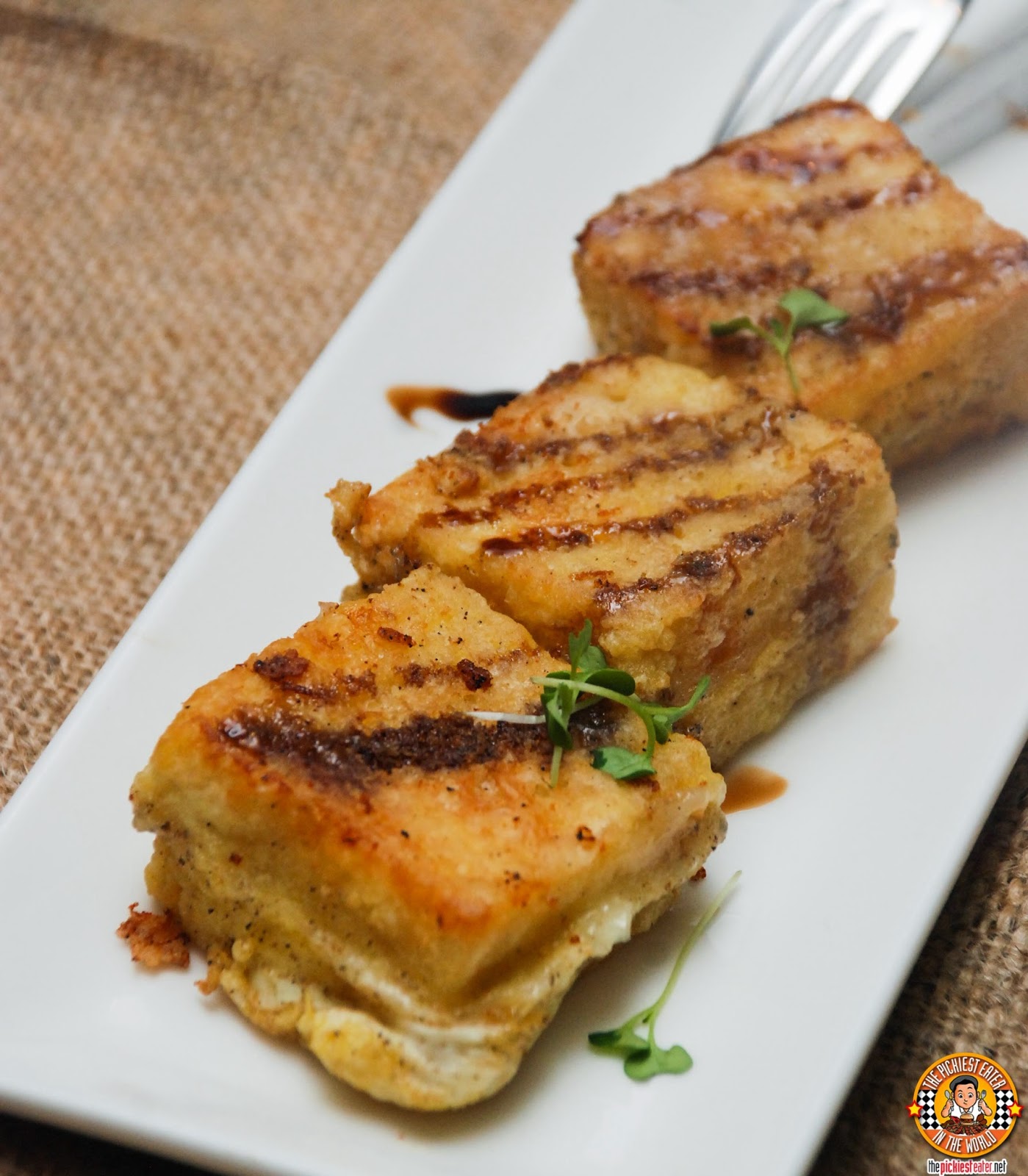 The first appetizer I went for was the Mozzarella in Carrozza (P220). Think of it as one of the most kick ass Grilled Cheese Sandwiches you'd ever try. Gooey, Melted Mozzarella cheese is encased in it's bread "Carrozza" (which is Italian for "Carriage".. Just call me "Richie Zamorelli" *wink wink*), before being pan fried in potter and served with a balsamic reduction. Every bite had a gentle sweetness that me wish that there was a double decker version of this on the menu. 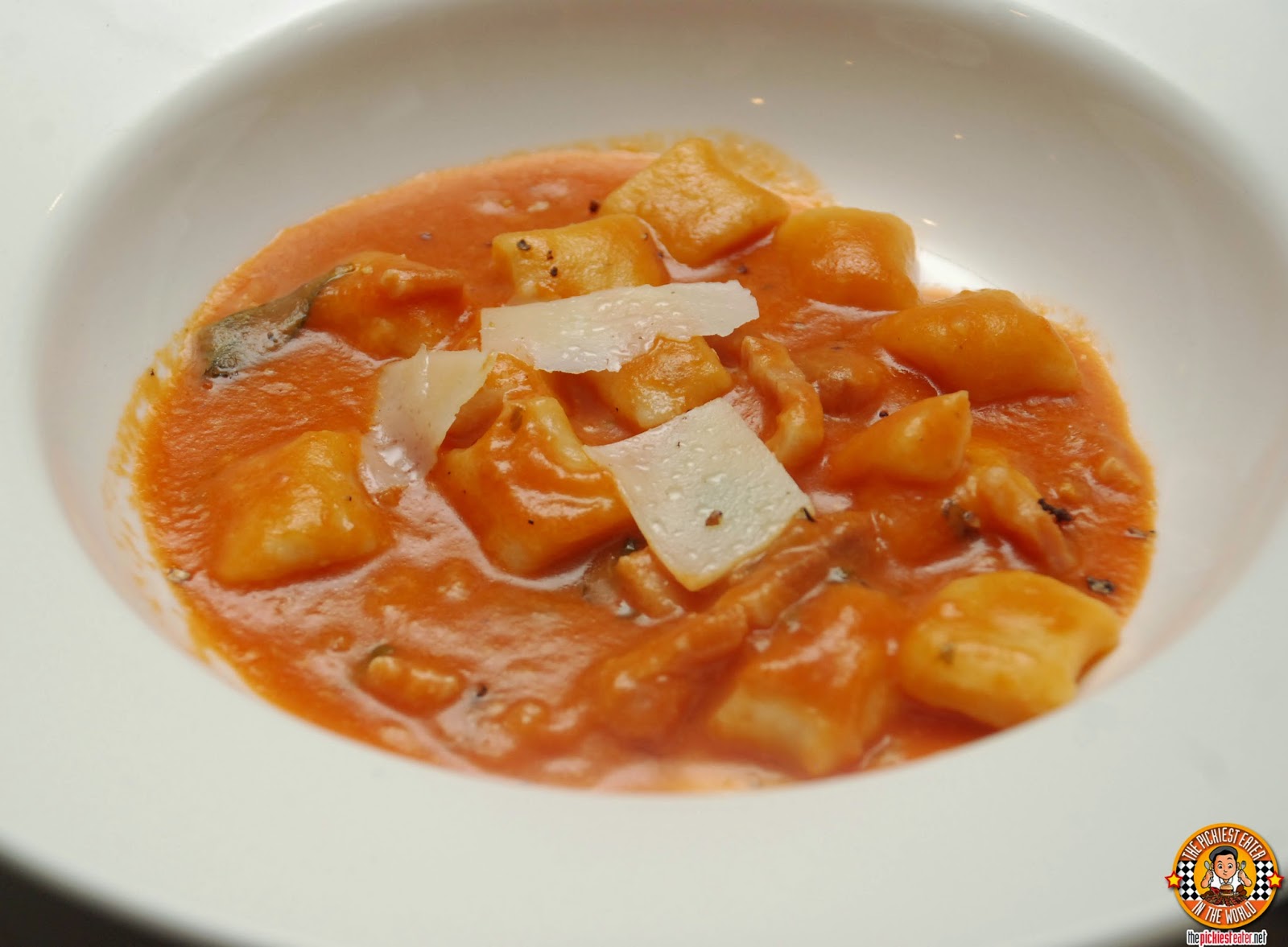 I was a little hesitant to try the dish, what i initially perceived to be a tomato based pasta. I lost all control, and I instinctively stuck a fork into it as soon as I was told that it was actually Gnocchi Amatriciana (P390). Homemade Potato and Semolina Gnocchi are bathed in a rich tomato sauce, and mixed with thick cut Pancetta, and topped with Grana Padano Cheese shavings.

If you want to establish yourself as a top Italian restaurant, you need to have a kick ass selection of pastas. Ponti's Pasta dishes whoops so much ass, even Chuck Norris would be impressed.  Much to my elation, the two pasta dishes they brought out weren't tomato based! 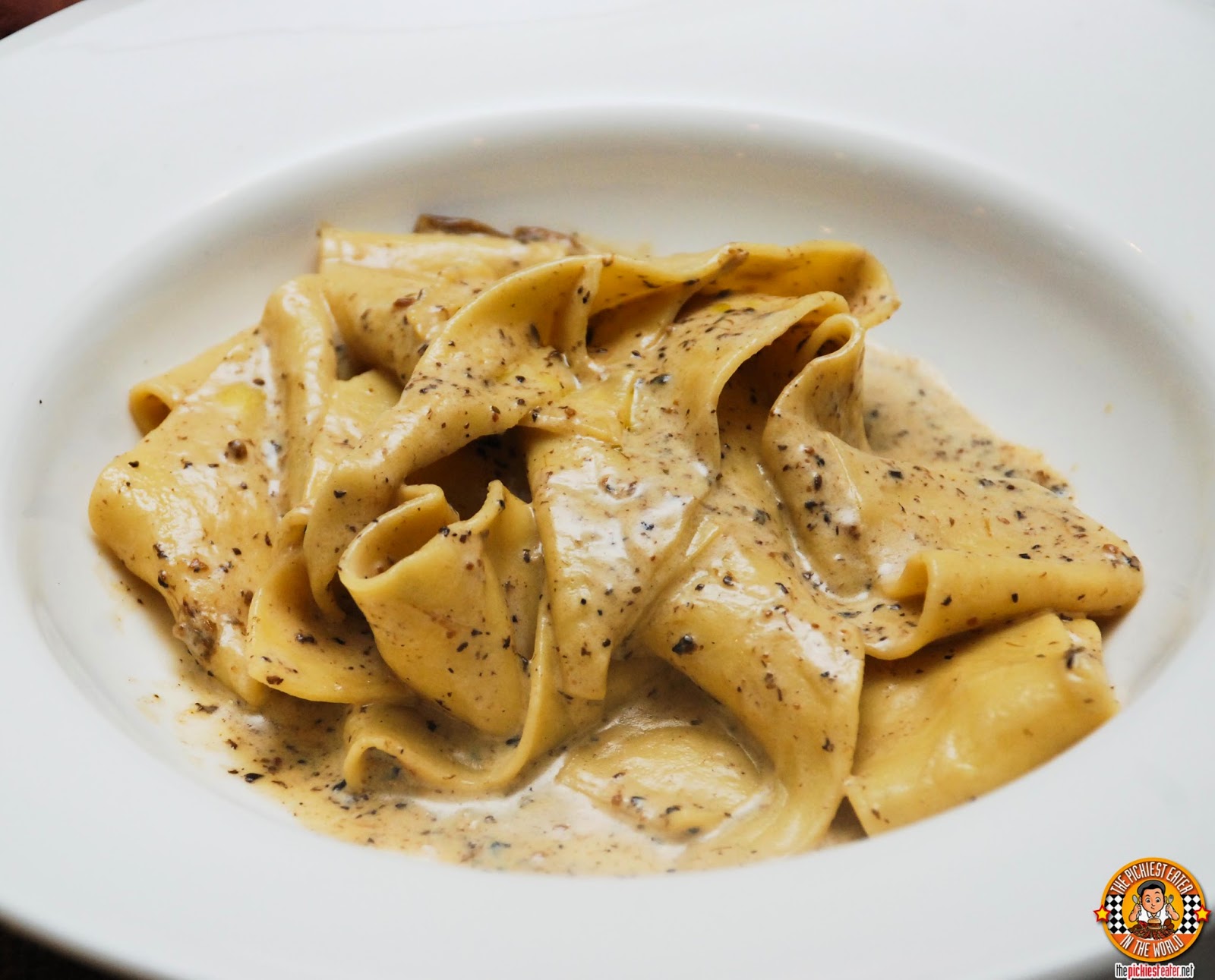 I started with the Crema Di Tartufo (P450), which is every mushroom lovers dream. Whether it's pasta or pancit, I love thick noodles, and I don't think it gets any thicker than Pappardelle, which would make Fettucinne, already known as a thick noodle, look like pasta's version of Karen Carpenter. The precise execution used by Chef Panky in balancing the truffle paste and the truffle oil, together with the Porcini Mushrooms, reaffirmed to me that this guy knew his stuff. 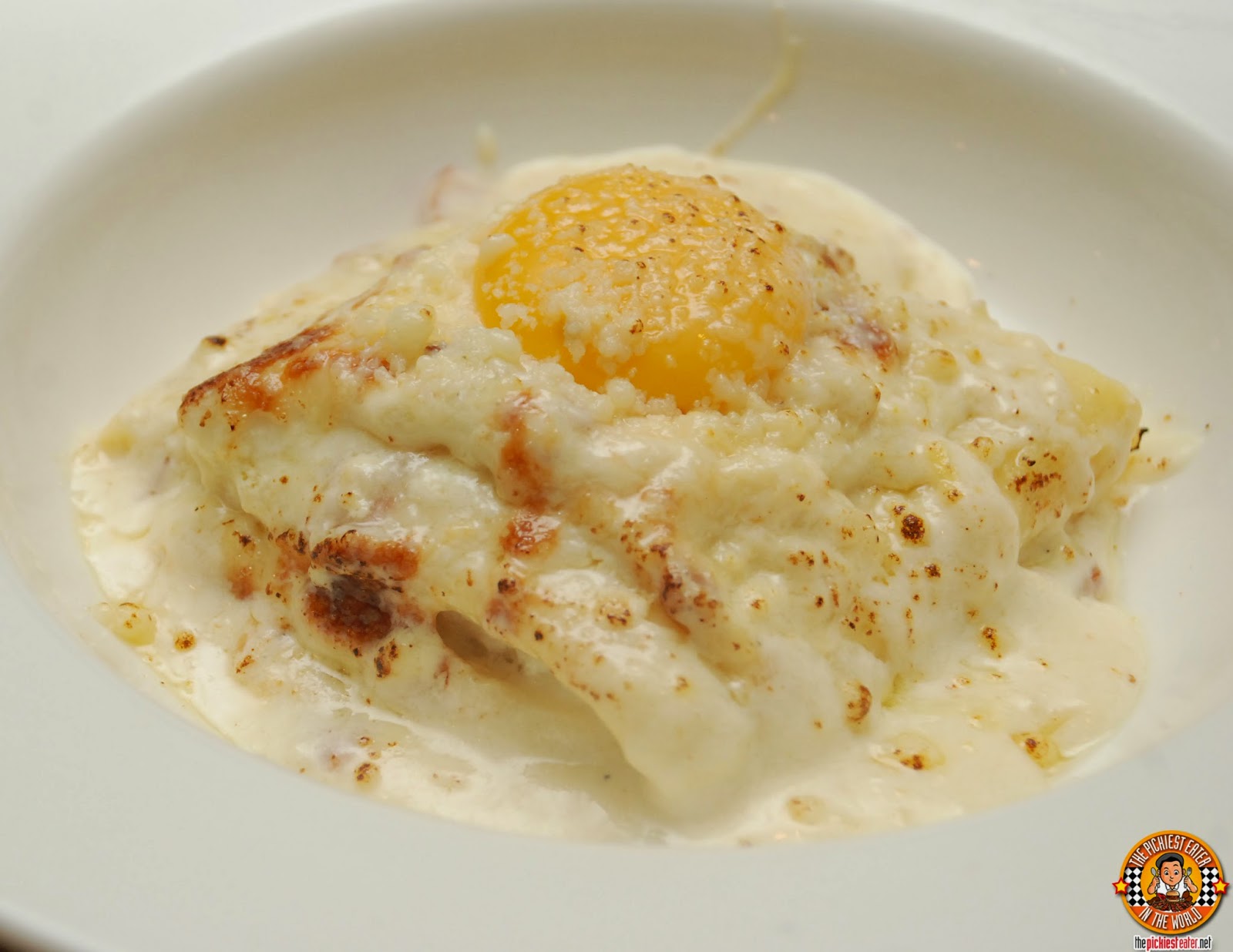 As I mentioned before, Lasagna used to be my favorite dish when I was a kid, but unfortunately, as I got older, the tomato sauce began triggering my Hyper-Acidity. When I saw the Lasagna Carbonara (P420) brought to our table, it nearly brought tears to my eyes. This is EXACTLY what the doctor ordered for me. 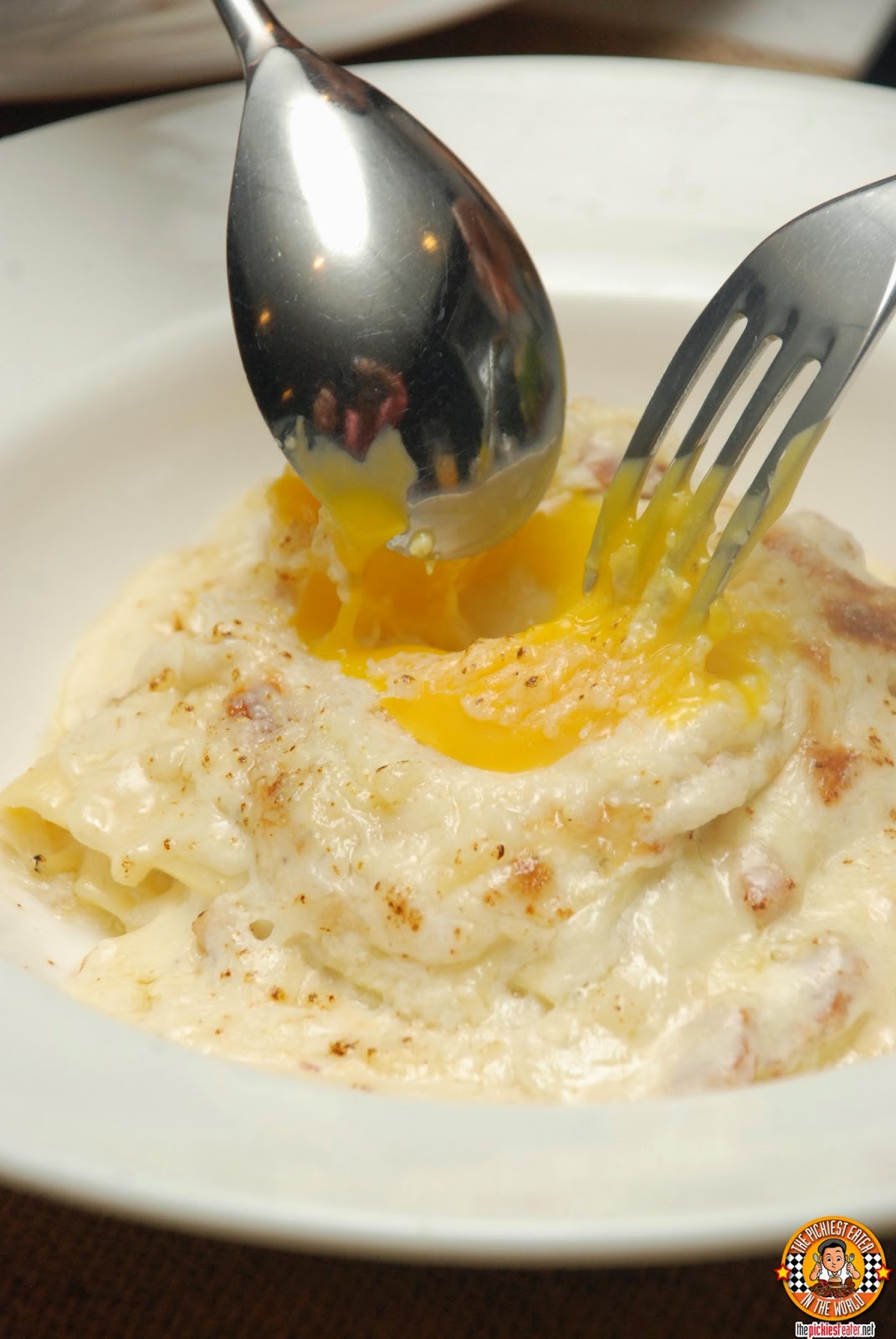 Imagine, layer upon layer of Lasagna noodles, simmering in a rich mozzarella cream. The creaminess is tempered by strips of Pancetta Tesa and grated Grana Padano, while a raw egg yolk once again, brings balance to the force.
Molto Eccellente! 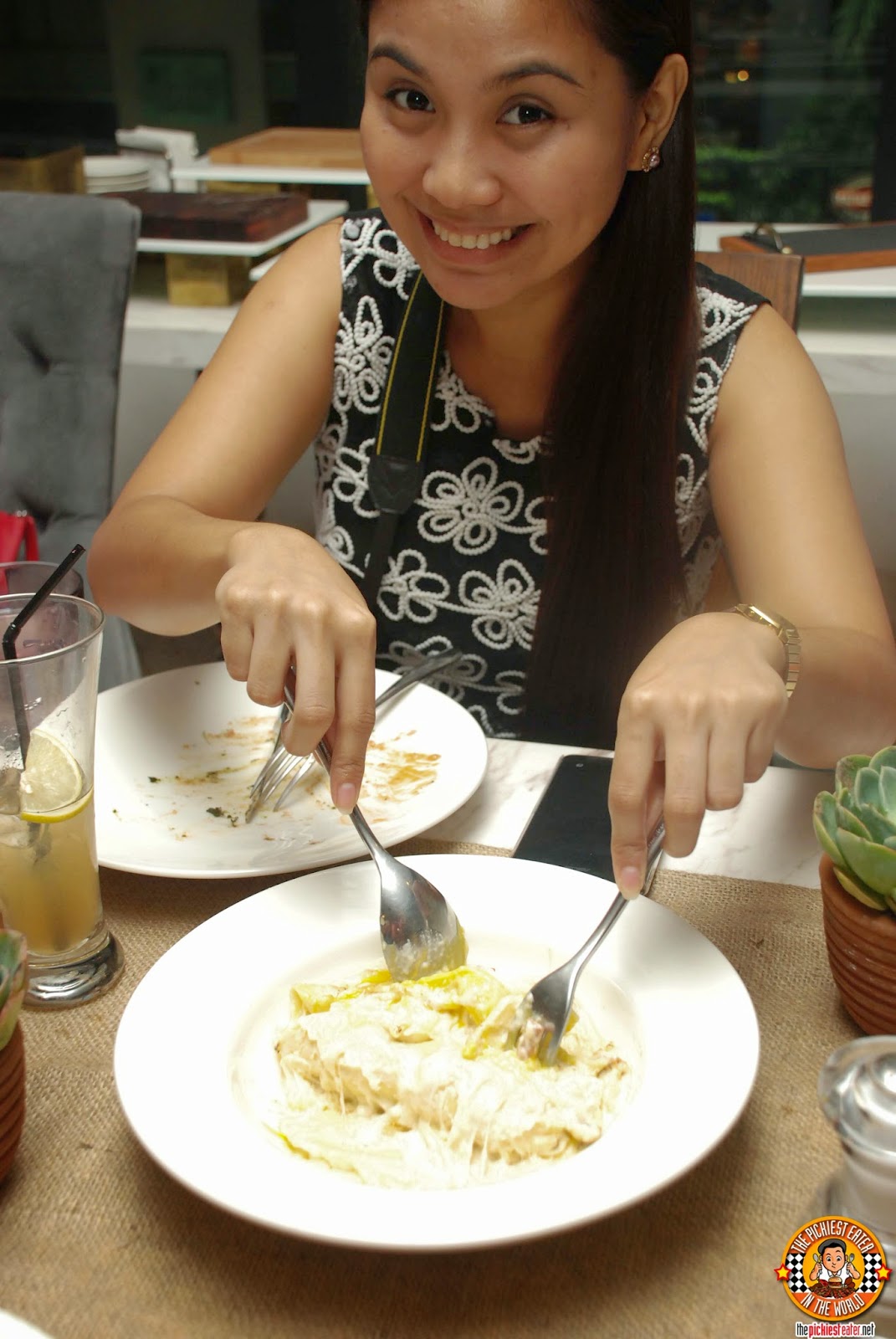 Much thanks to my blogger friend, the lovely lady behind the blog,
"The Sky Chick" for her excellent ninja mixing skills.

Visit her blog at www.theskychick.com

Just when I thought the food gods couldn't smile on me any more than they already have that day, the waiter placed two non-tomato based pizzas right in front of me. 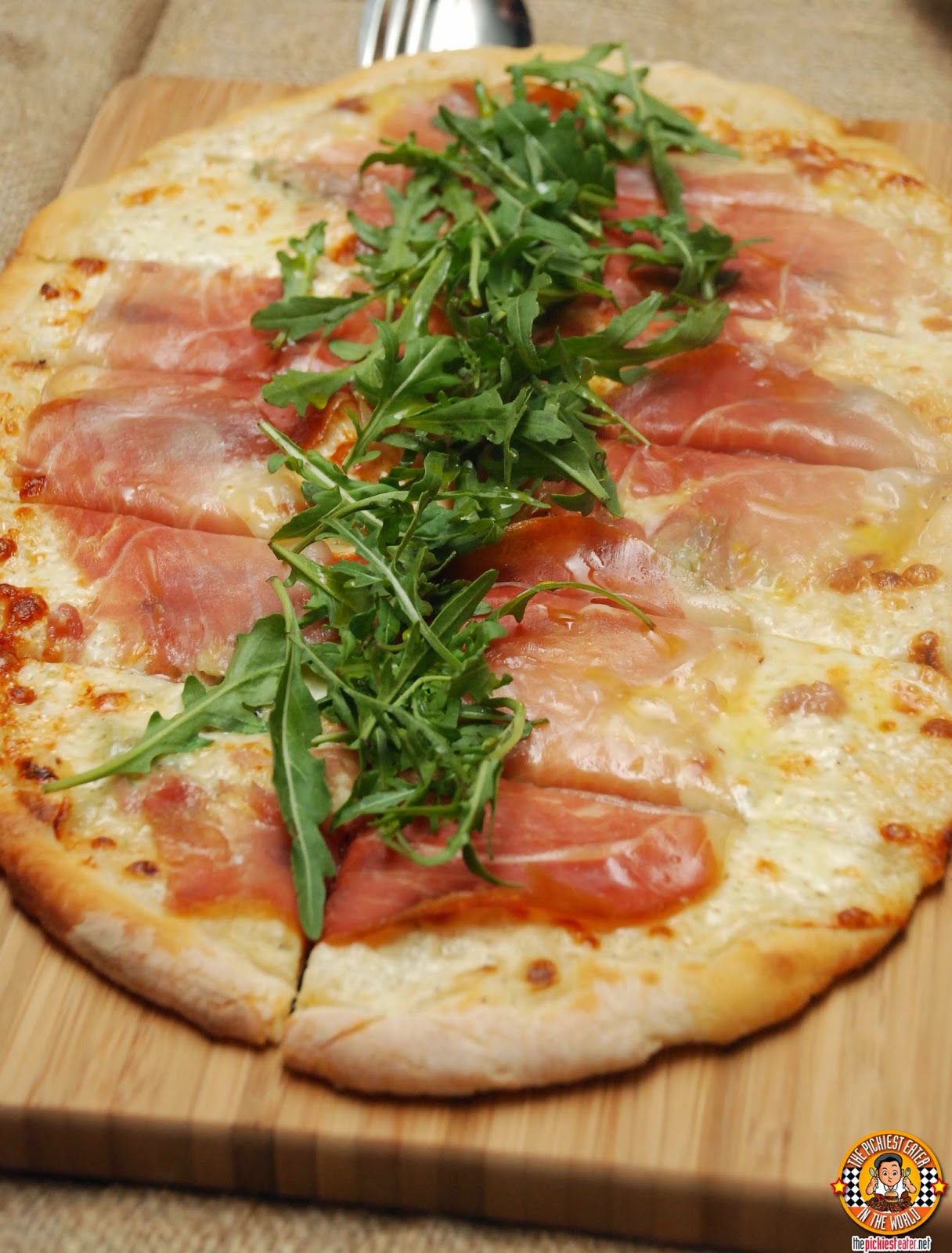 The thin slices of Parma Ham ensured that the Pizza Valdostana (P520) was the first pizza I reached for - and damn was it good. This is one of Chef Panky's signature dishes. The saltiness of the ham worked well with the Gorgonzola cream base, and the gooey mozzarella ties everything together wonderfully.
Oh, and the good thing about the Arugula is.. It's easy to pick out hehe Though it definitely wasn't as protein heavy as the Valdostana, the Pizza Tartufo (P520) did not lack for flavor. The creamy sauce, filled with chunks of fresh mushrooms melded perfectly with the mozzarella cheese and drops of truffle oil, making it quite a hearty pizza in itself. 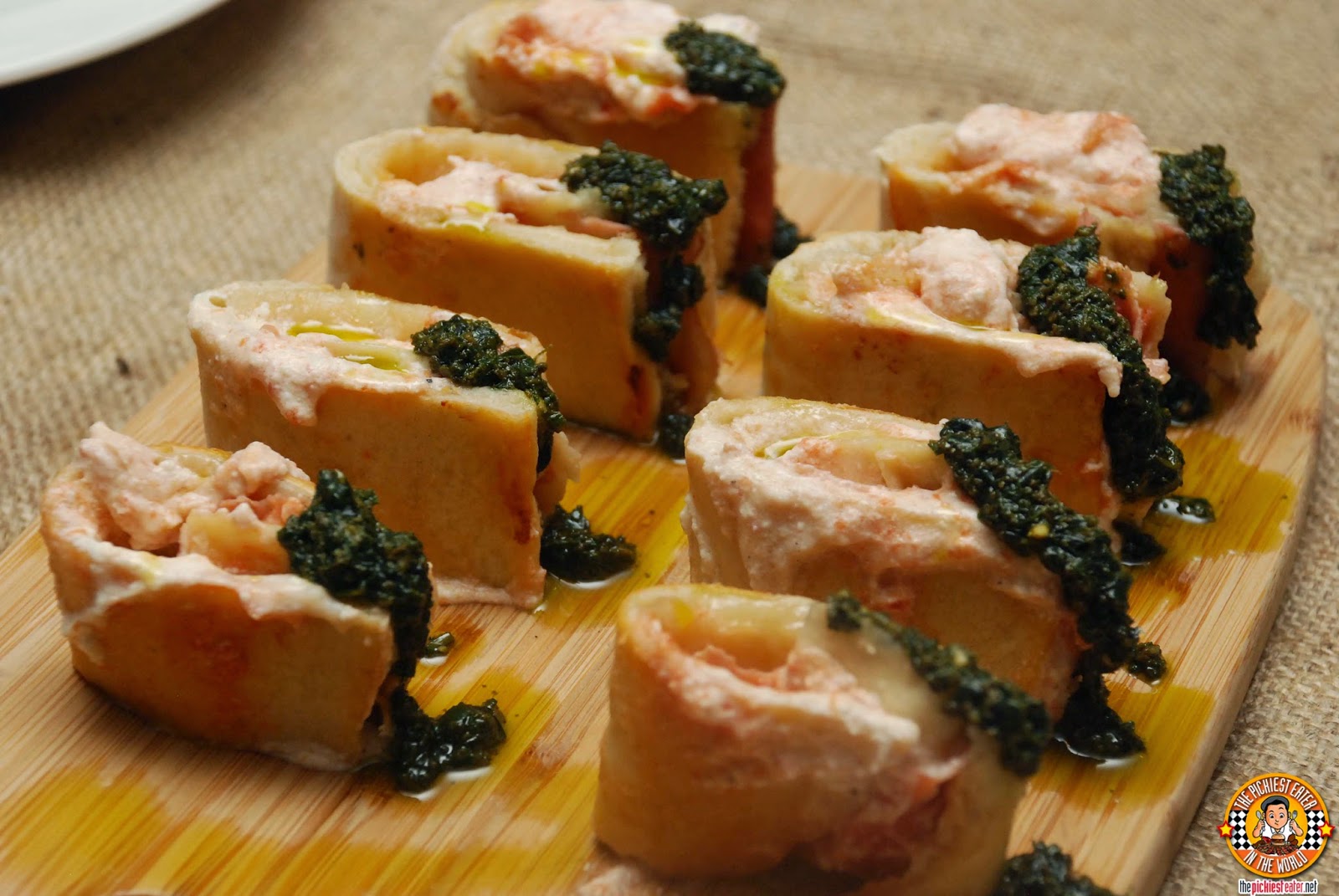 Next, I set my sights on the Rotolo (P480 for "Originale"). Upon my inquiry, I was informed that it indeed had a tomato sauce, but it was Chef Panky's version of a Tomato Cream sauce, which to me, sounded a bit too appealing to pass up.

And it's a good thing I didn't let this bad boy go to waste. The tomato Cream sauce is spread out on a strip of Napoletana crust, followed by a touch of Ricotta. A slice of Mortadella is then laid out on the crust, before it is gently rolled by hand, before being finished off with a healthy scoop of pesto. 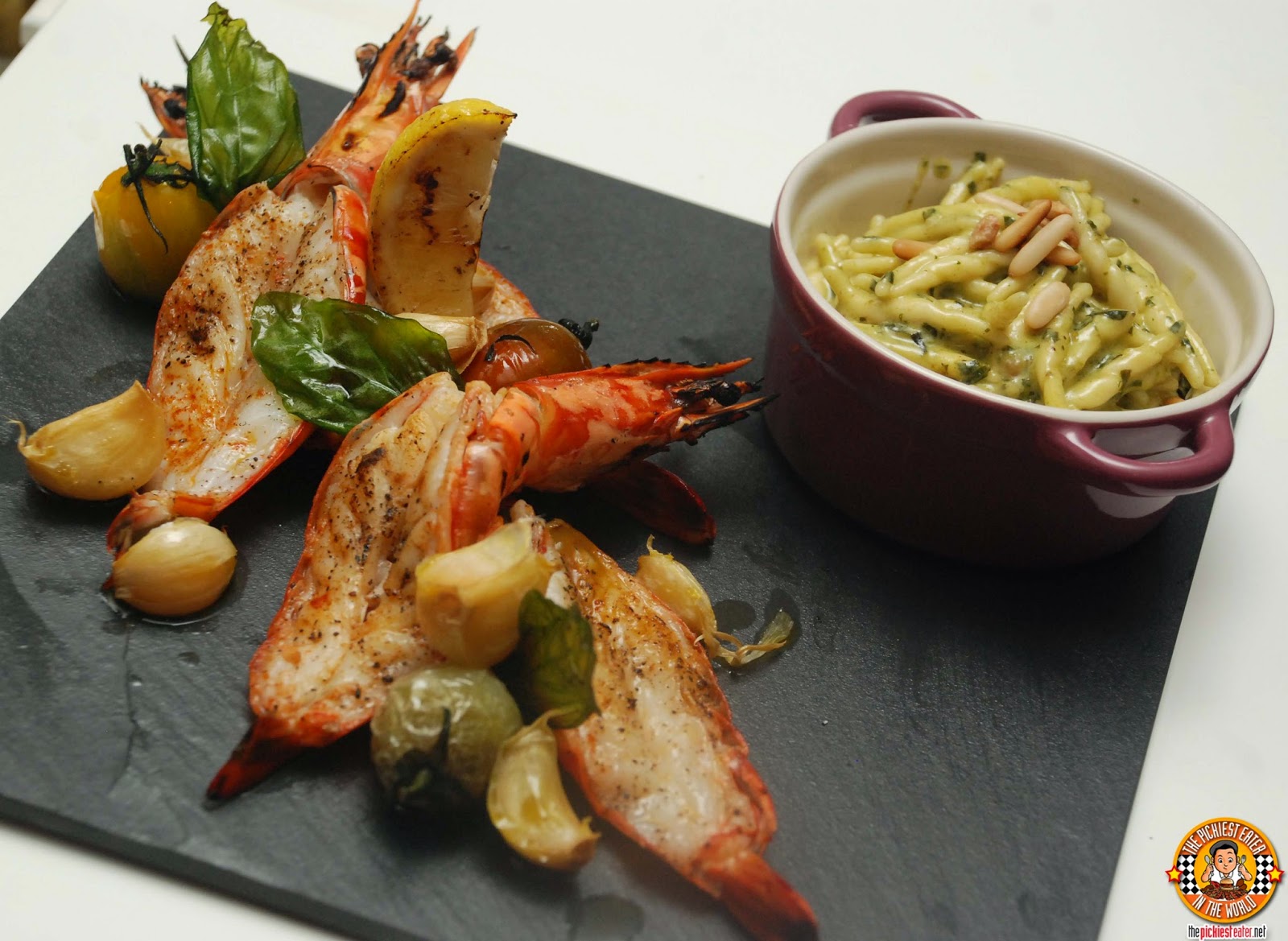 Rina let out a squeal of delight when this gorgeous platter of Grilled Tiger Prawns magically landed on our table. The "Presto", as the dish was called, consists of plump grilled prawns and served with cherry tomatoes, speckled with Fried Basil and Garlic Confit. The dish also comes with Trofie Pesto, that, if it was served in a bigger size, would be a meal in itelf. 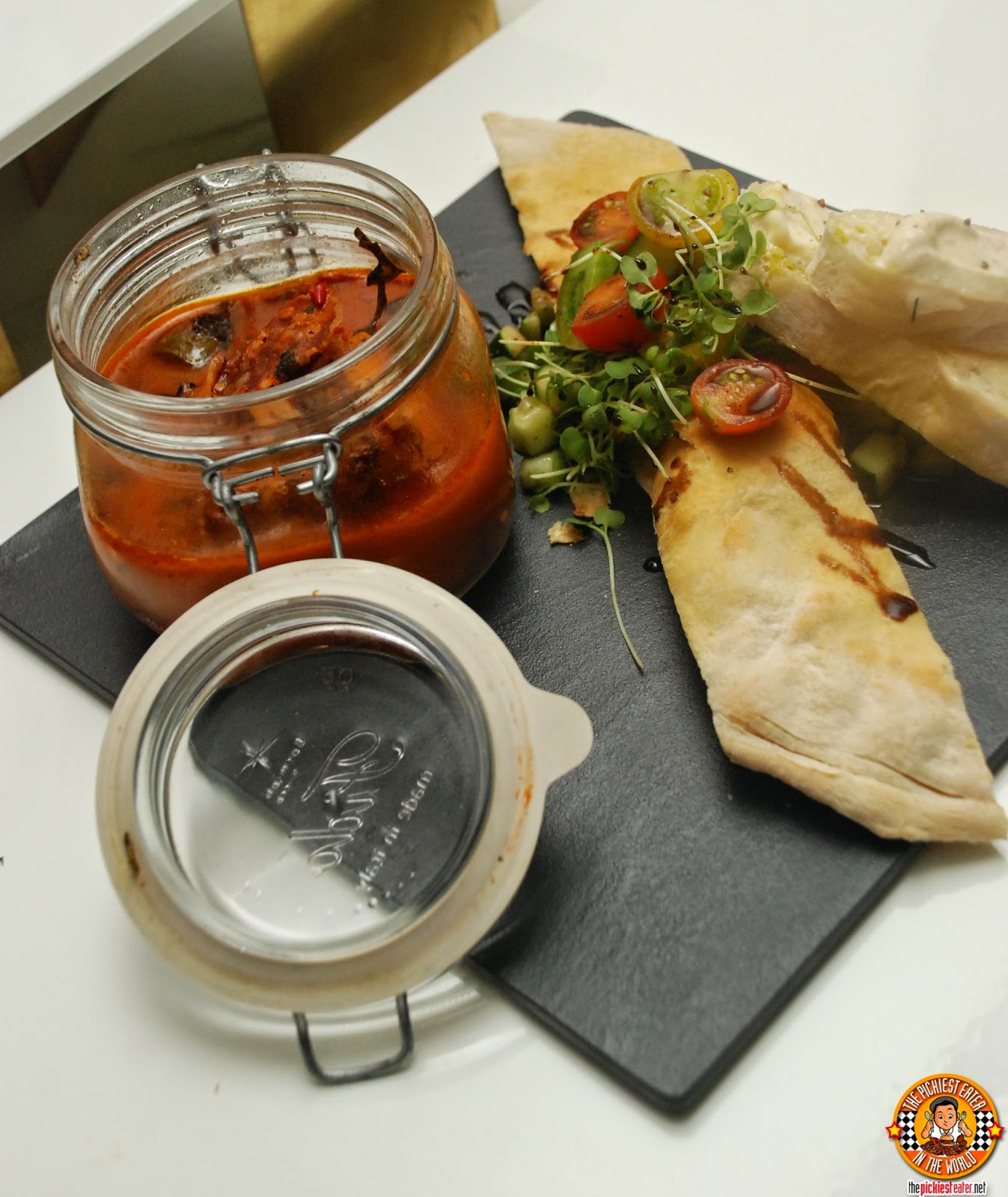 The Seafood hits just kept on coming, this time, with the Il Ponticello's Chilean Seabass in Bottiglia (P1,400). This was a visually stunning dish with the stunning, pan fried Chilean Seabass swimming in a prawn broth with a medley of Mussels and Clams, and bits of Napoletana Piccante Sausage giving the sauce a bit of heat, all served in a Mason Jar. 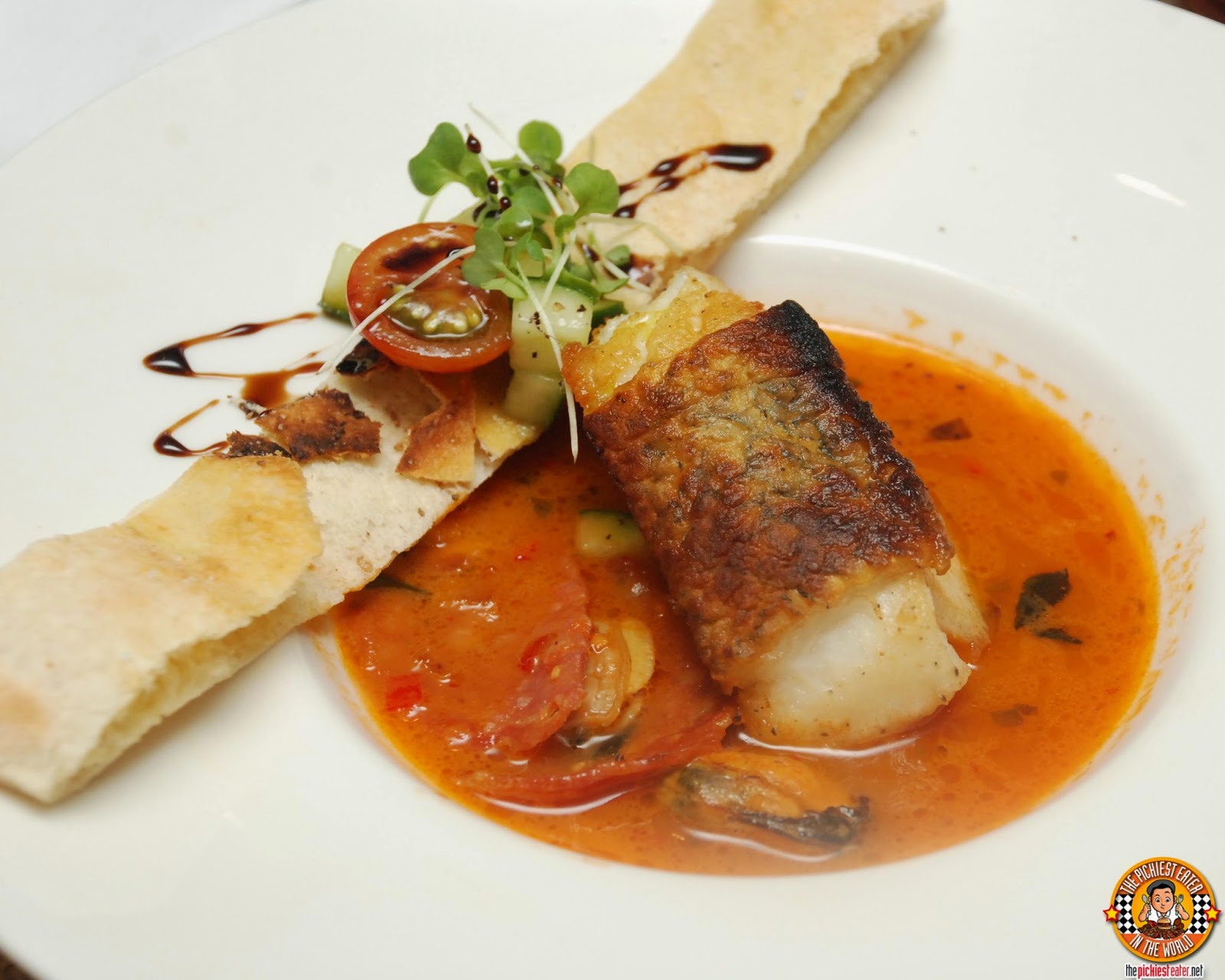 Though the plating fantastic and made for a nice picture, it was hard to appreciate the glorious piece of fish that was at our disposal. Chef Panky plated it the traditional way, so we could see the Chilean Sea Bass in all it's splendor. Lemme just say, that was one of the best fish dishes I've had. The skin was remarkably crisp, while the white meat remained immaculately tender, going perfectly with the light kick of the broth. 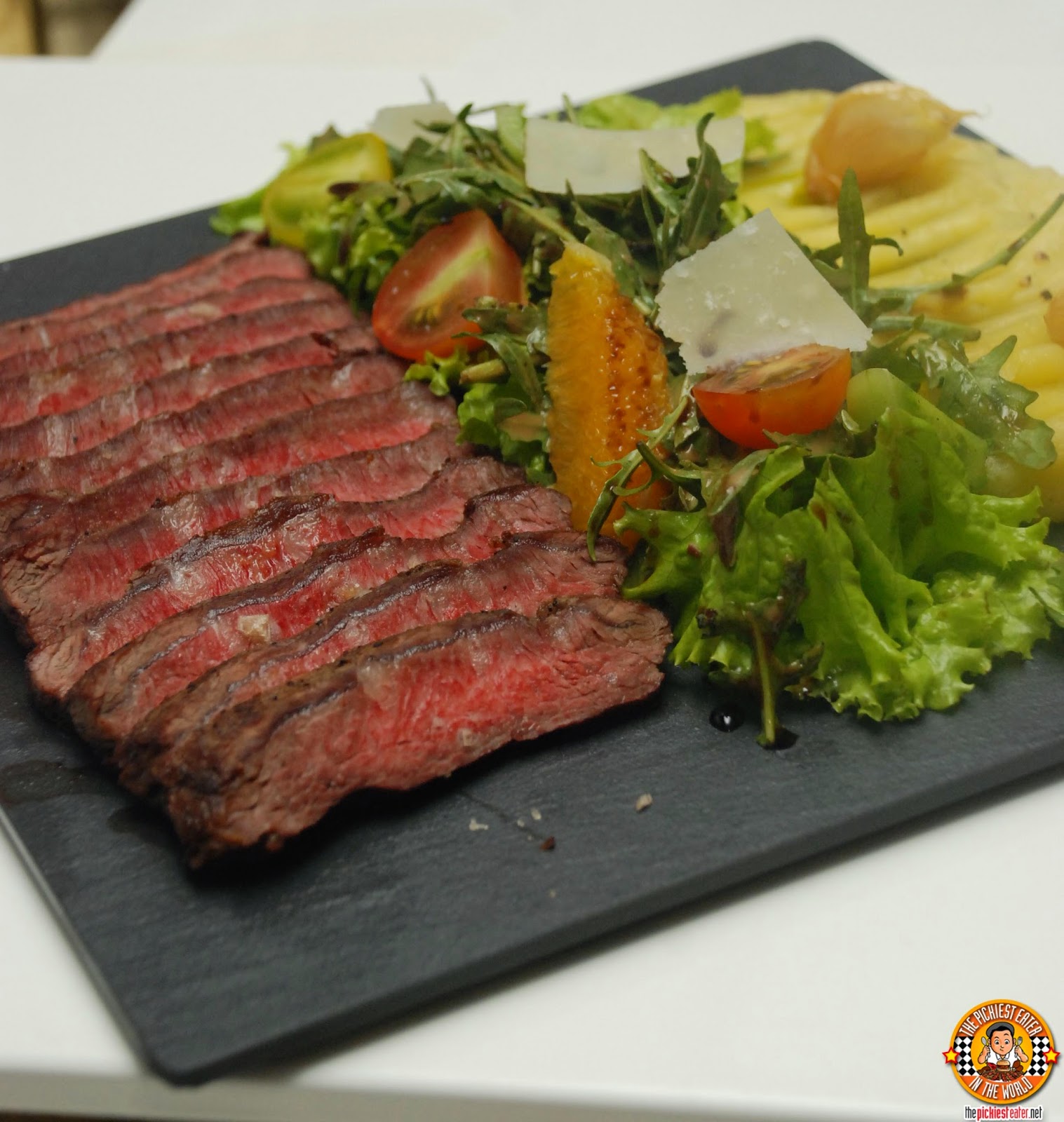 Rina and I were impressed by the Flat Iron Steak (P590), especially since the cut wasn't as fatty as the usual steaks I prefer. But the Flat Iron Steak was so tender, it practically melted in my mouth. This was perfect for sharing for me and Rina, because she happily went at the Summer Salad, while I annihilated the Garlic Mashed Potatoes. 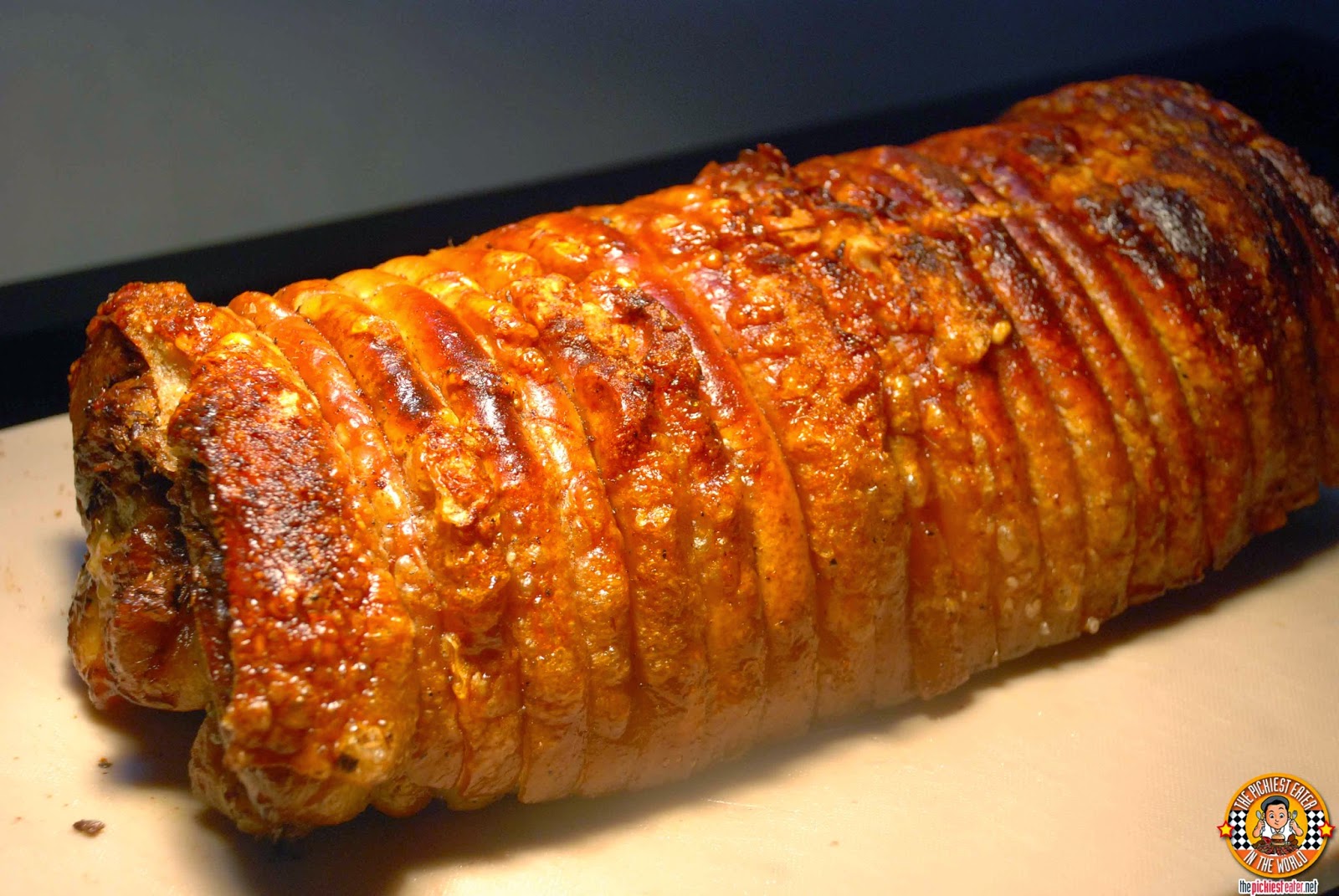 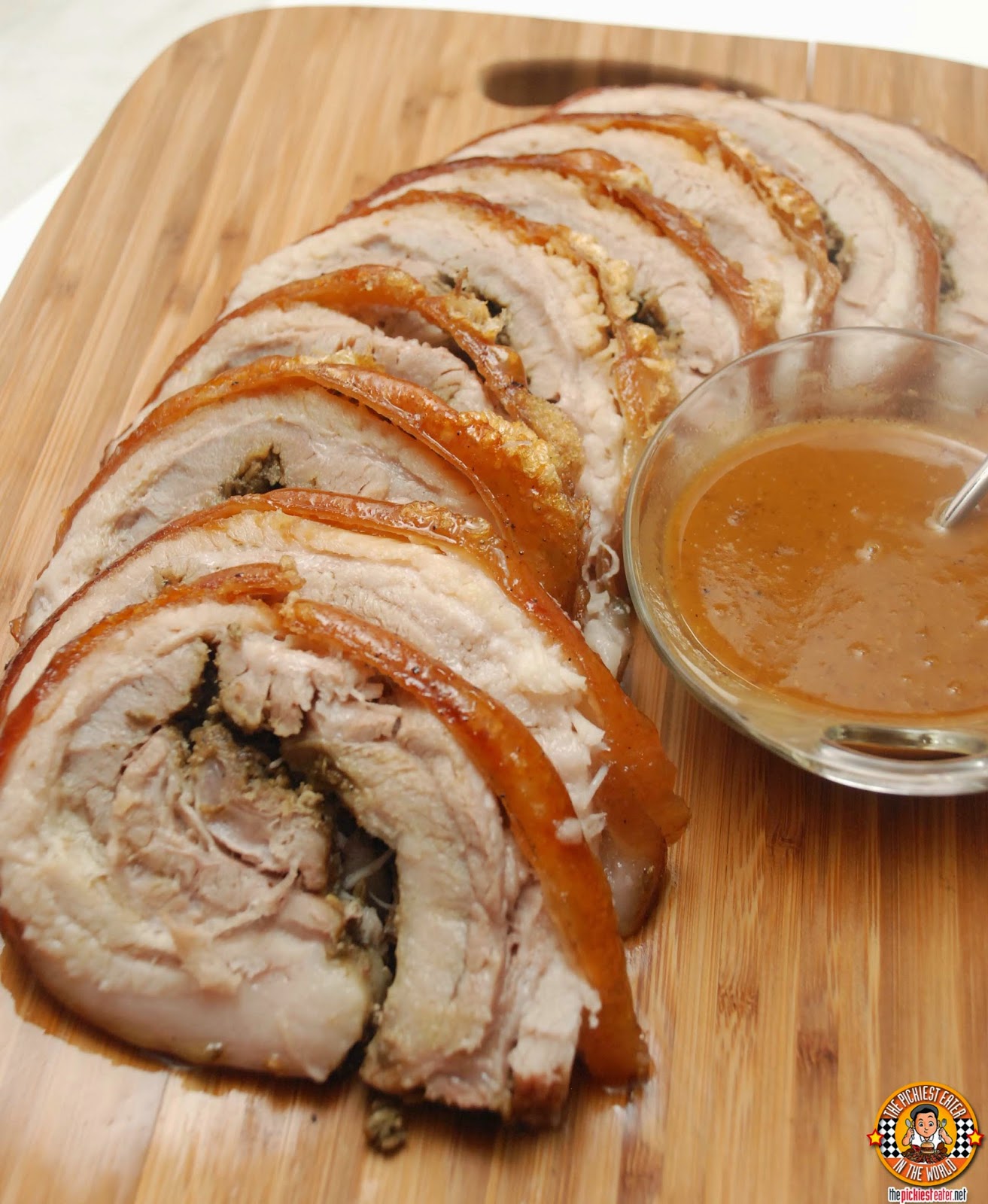 The gorgeous belly roll is seasoned with fennel and garlic, before being slow roasted for hours. The meat was extremely flavorful, but the Pommery Mustard sauce added a nice zing of tangyness, while the skin remained delightfully crispy.

Definitely something to go back for at Il Ponticello! 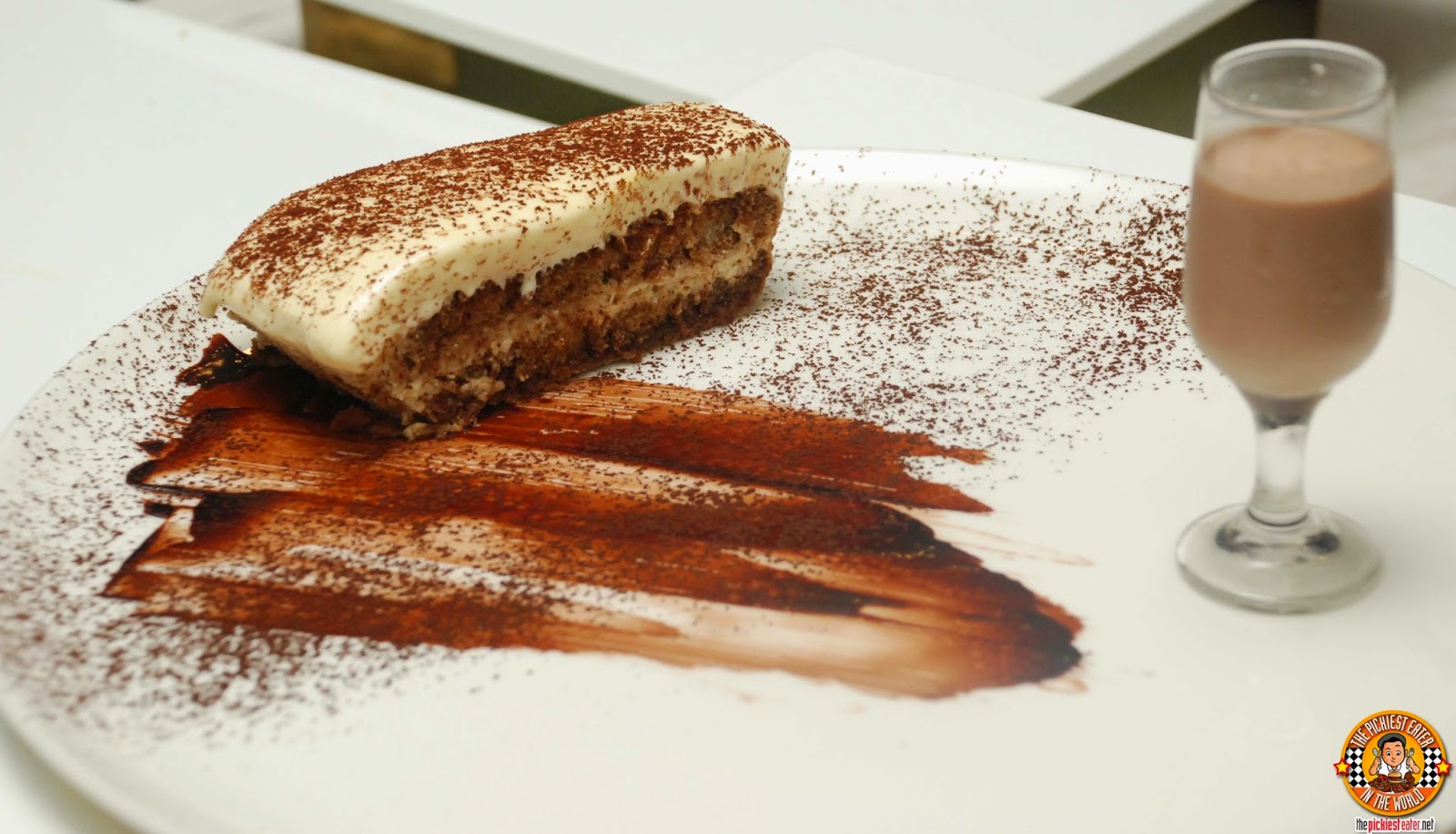 Il Ponticello has a unique spin on the Italian classic dessert, Tiramisu (P290). Made with Savoiardi (Lady Fingers) and Zambaglione (Italian Custard), infused with a bit of Amaretto, then dusted with trickles of Cocoa Powder. The cake is then served with a shot of Ristretto, which is a variation of espresso. 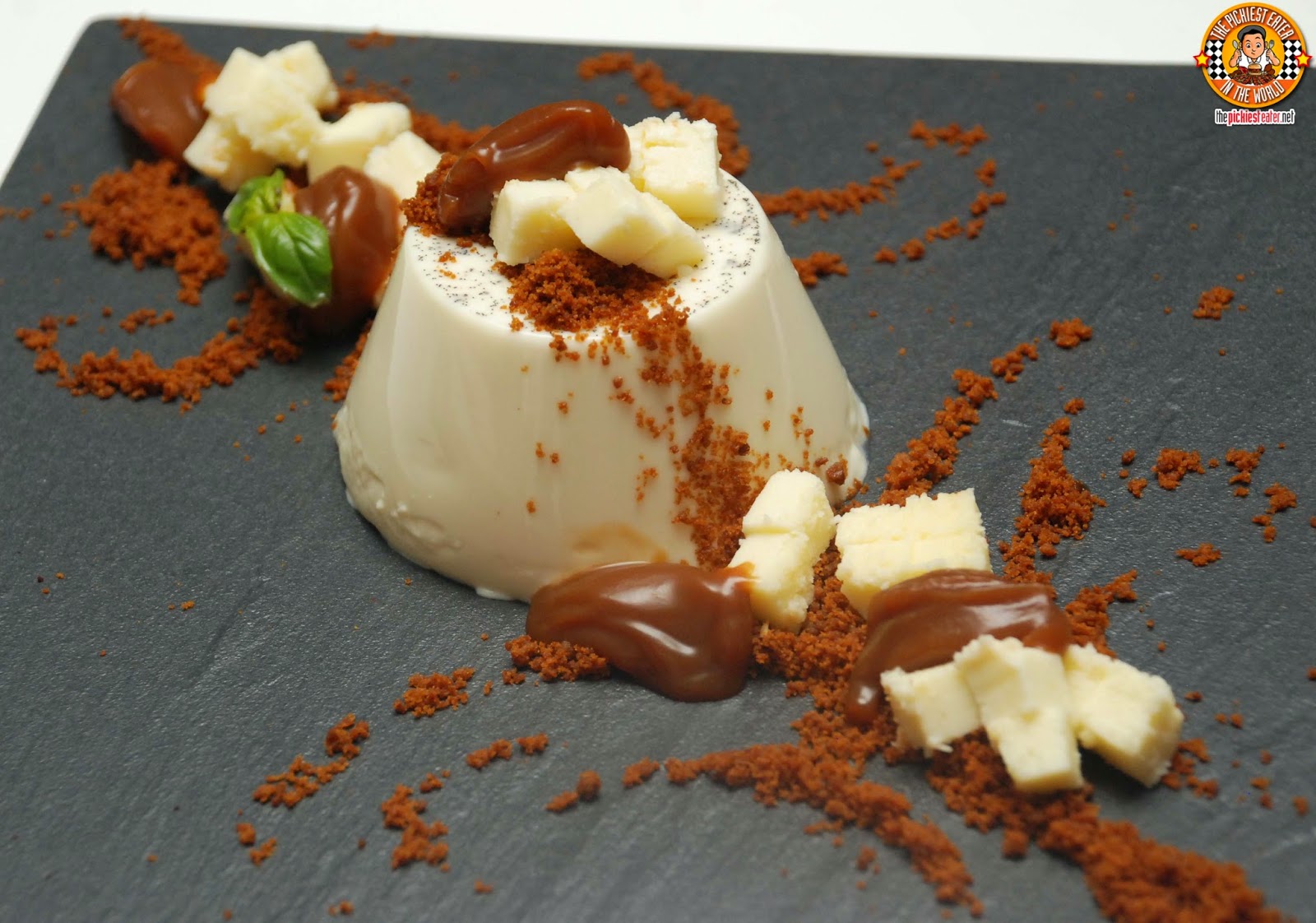 I love me some Panna Cotta, so you can imagine how I was totally floored by Ponti's Cheesecake Panna Cotta (P290). The mildness of the Vanilla Panna Cotta was so creamy, and went well with the light tartness of the crumbled pieces of Cheesecake, while a drizzling of caramel sauce adds a wonderful touch of sweetness. 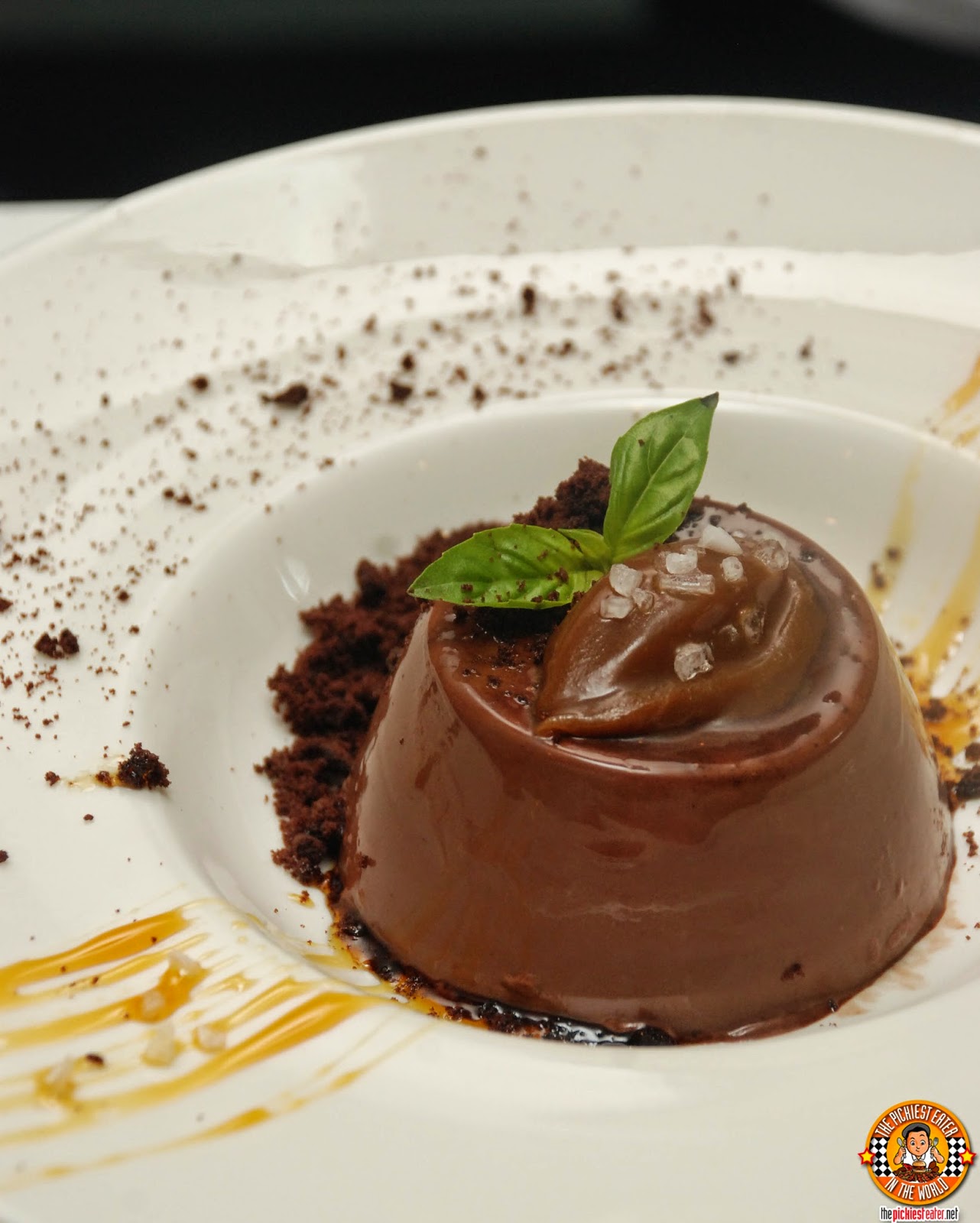 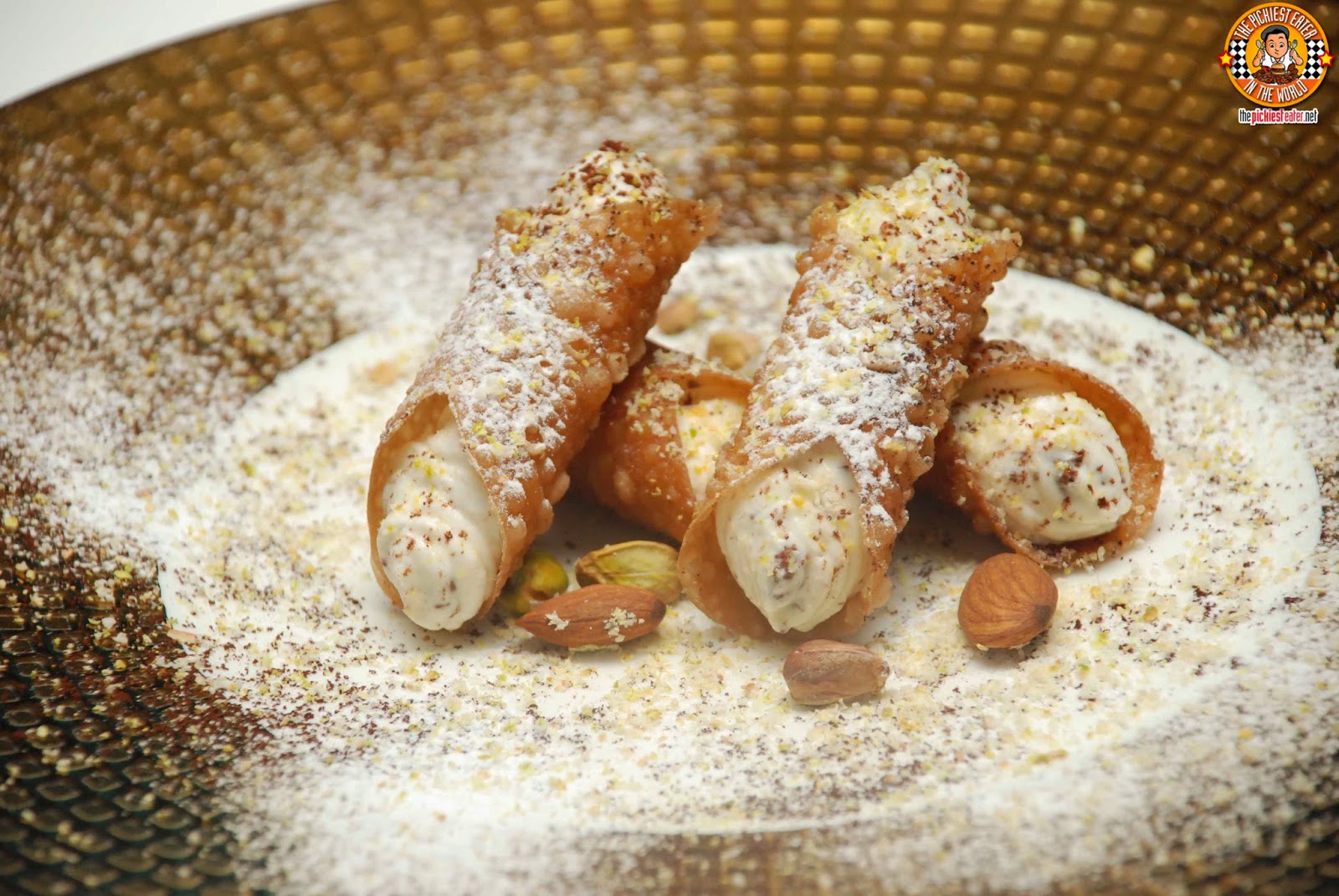 I could not get enough of Ponti's delicious Cannoli (P290). Delicately wrapped crispy Cinnamon Pastry Shell, filled with a ricotta cream, and sprinkled with bits of dark chocolate, and sweetened up by a dusting of powdered sugar. 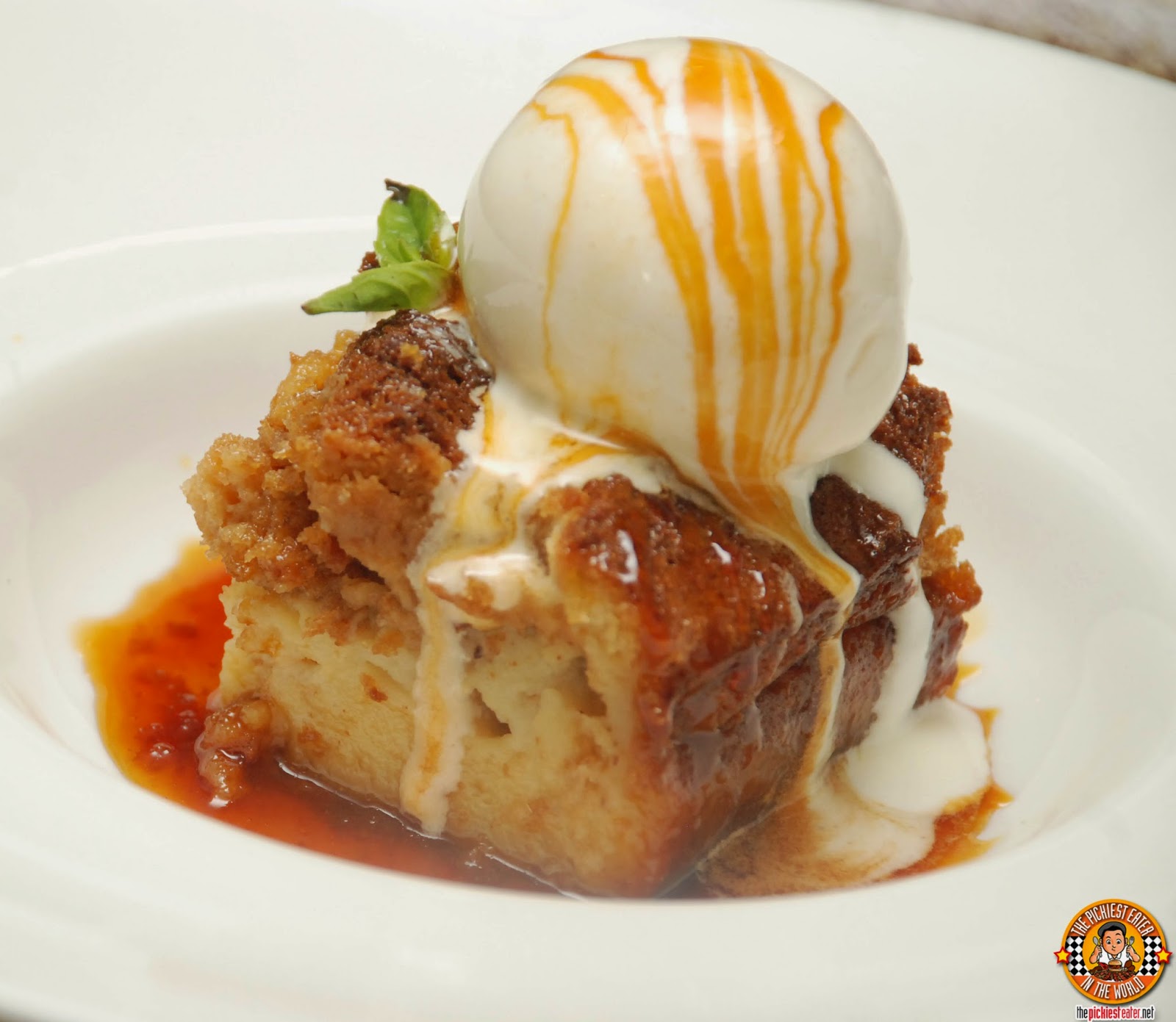 Since I'm more into creamy, bread based desserts, (as opposed to Rina's love for Chocolate based ones) the Caramello Di Semolina (P290) was very much up my alley. I loved the fusion of the buttery white bread, and cream, whilst being topped with Vanilla Ice Cream and drizzlings of caramel. 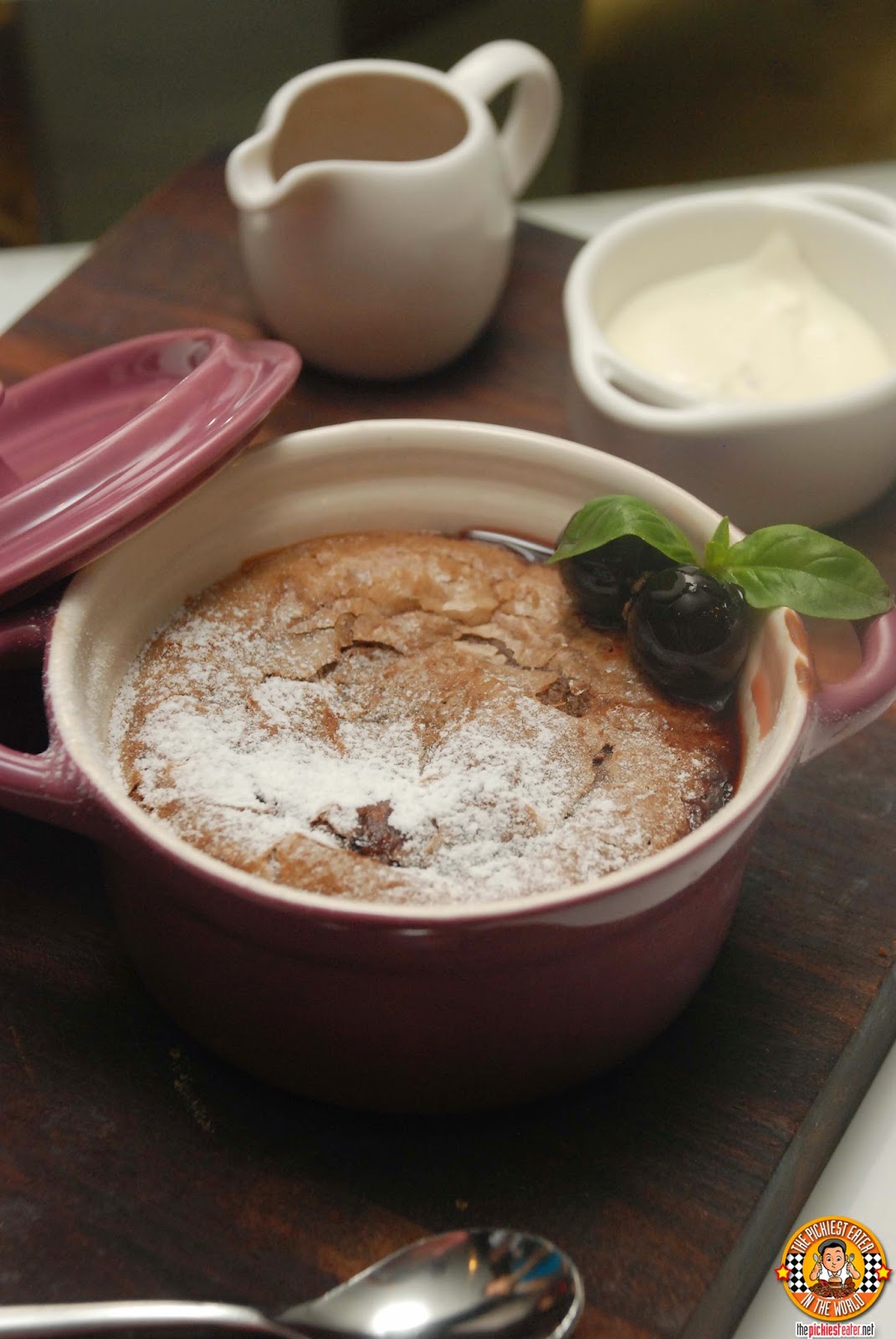 Perhaps the only thing that I tried from Ponti that didn't really impress me was the Budino Al Cioccolato (P390). It was a Chocolate Molten Lava Cake, served with Vanilla Cream, Amarena Cherries, and a side of Caramel Sauce.

Don't get me wrong - this was delicious, but unfortunately, I have a high standard when it comes to Lava Cakes, and this one fell short when compared to the one I hold to which such high regard.

But all the other dishes was absolutely incredible. 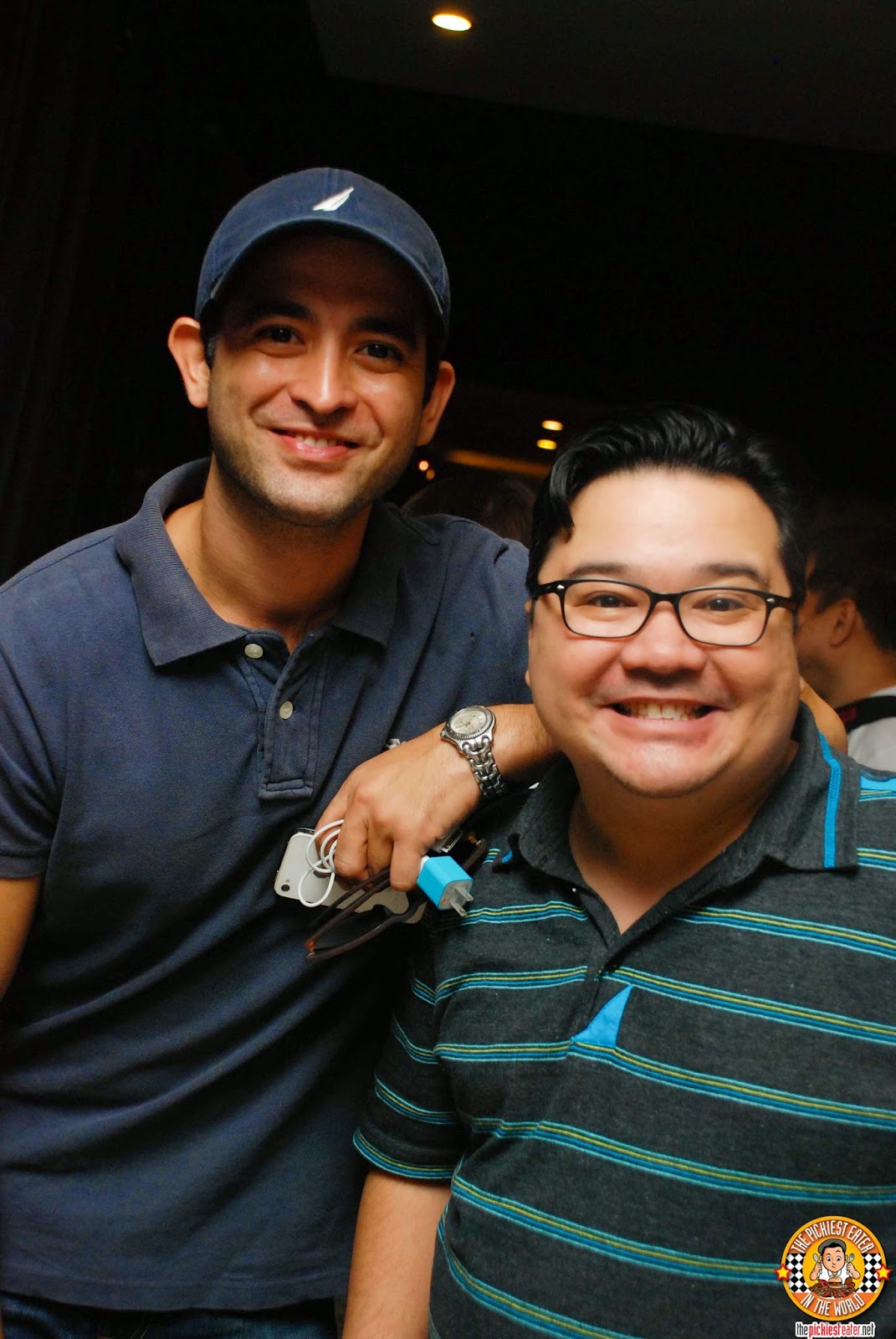 I also finally got to meet the Minister of Mushrooms, himself, Marco Lobregat, who coincidentally also turns out to be a good friend of my cousin, Kuya Pao.

Also, I've never felt so ugly in my entire life. 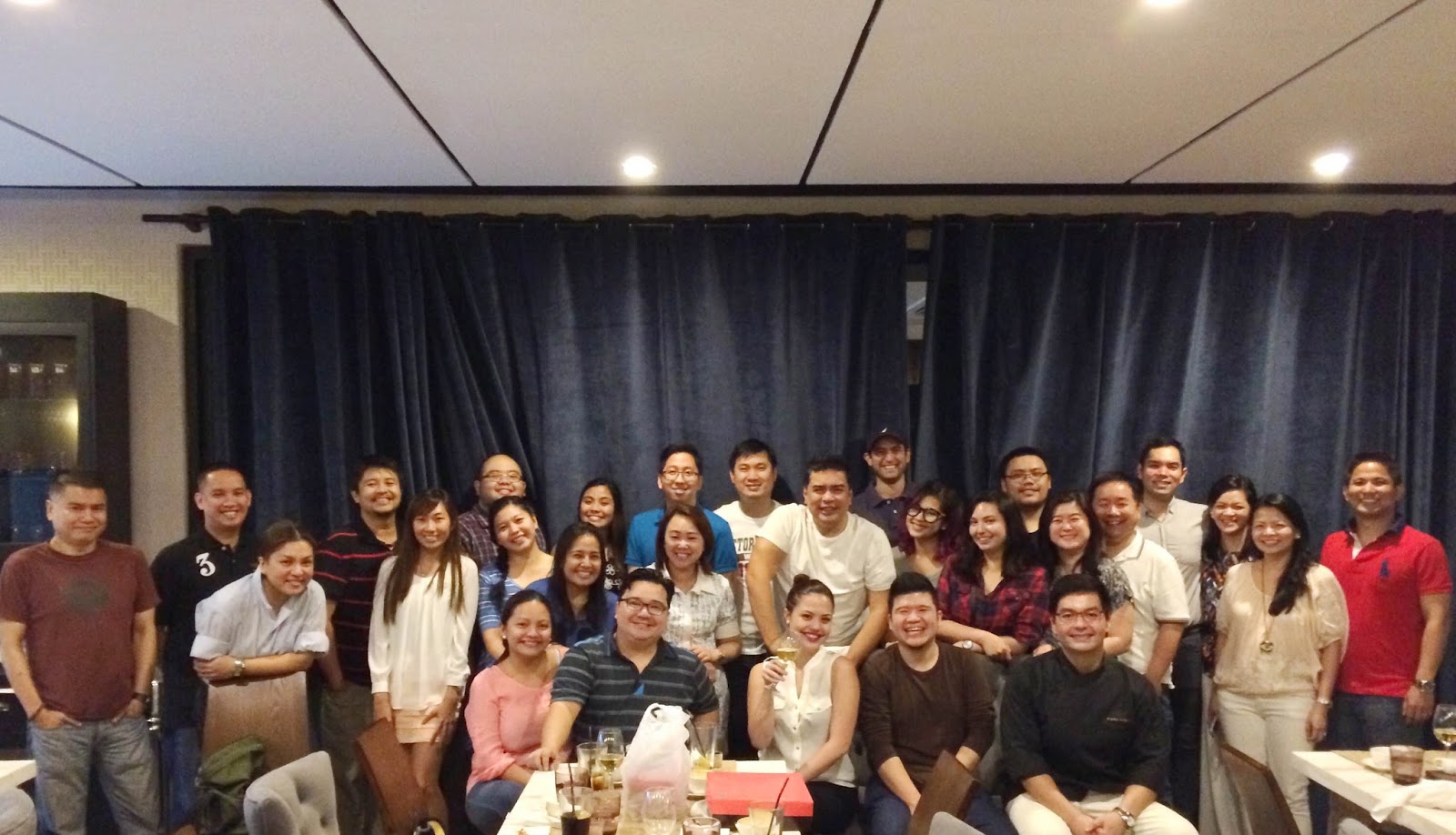 Instead of becoming a "Whatever happened to..." story among reminiscing 40-somethings, Ponti has extended its legacy into the younger crowd of today.


Other restaurants renovate or revamp.

With a hip new management in touch with the times, and a vibrant new menu, Il Ponticello reloaded. And in a big way.