IT'S SWISS WEEK AT EDSA SHANGRI-LA! 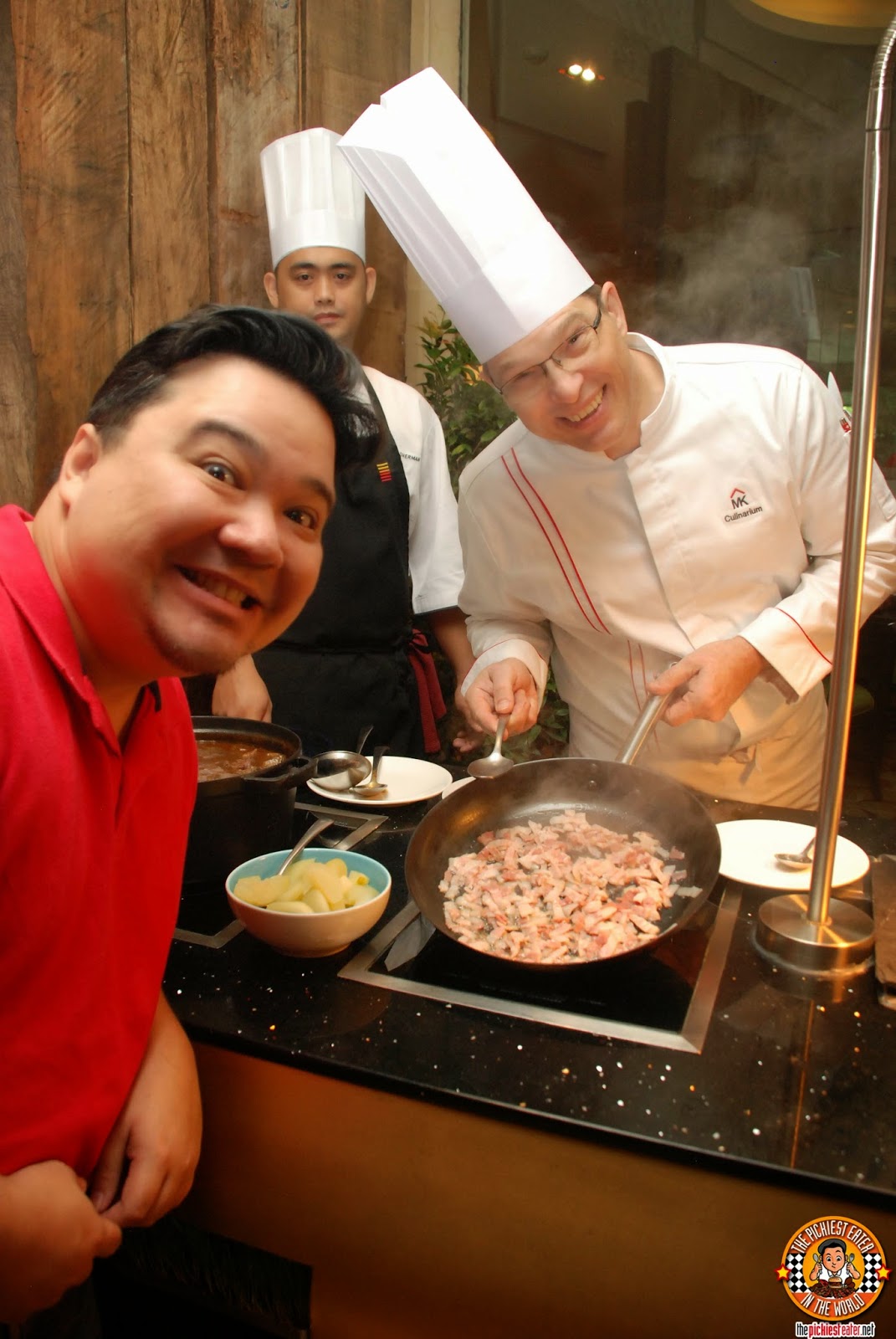 Chocolates, Cheese, Watches, Army Knives and Banks. Those are the very first things that come to my mind when I think about anything "Swiss". Sadly, I am left at a loss when I try to think of any sort of food (aside from Chocolate and Cheese of course) that comes from the great country of Switzerland.

Thankfully, Swiss Week is happening at Edsa Shangri-la Hotel this week, so I got a little teaser of what to expect! 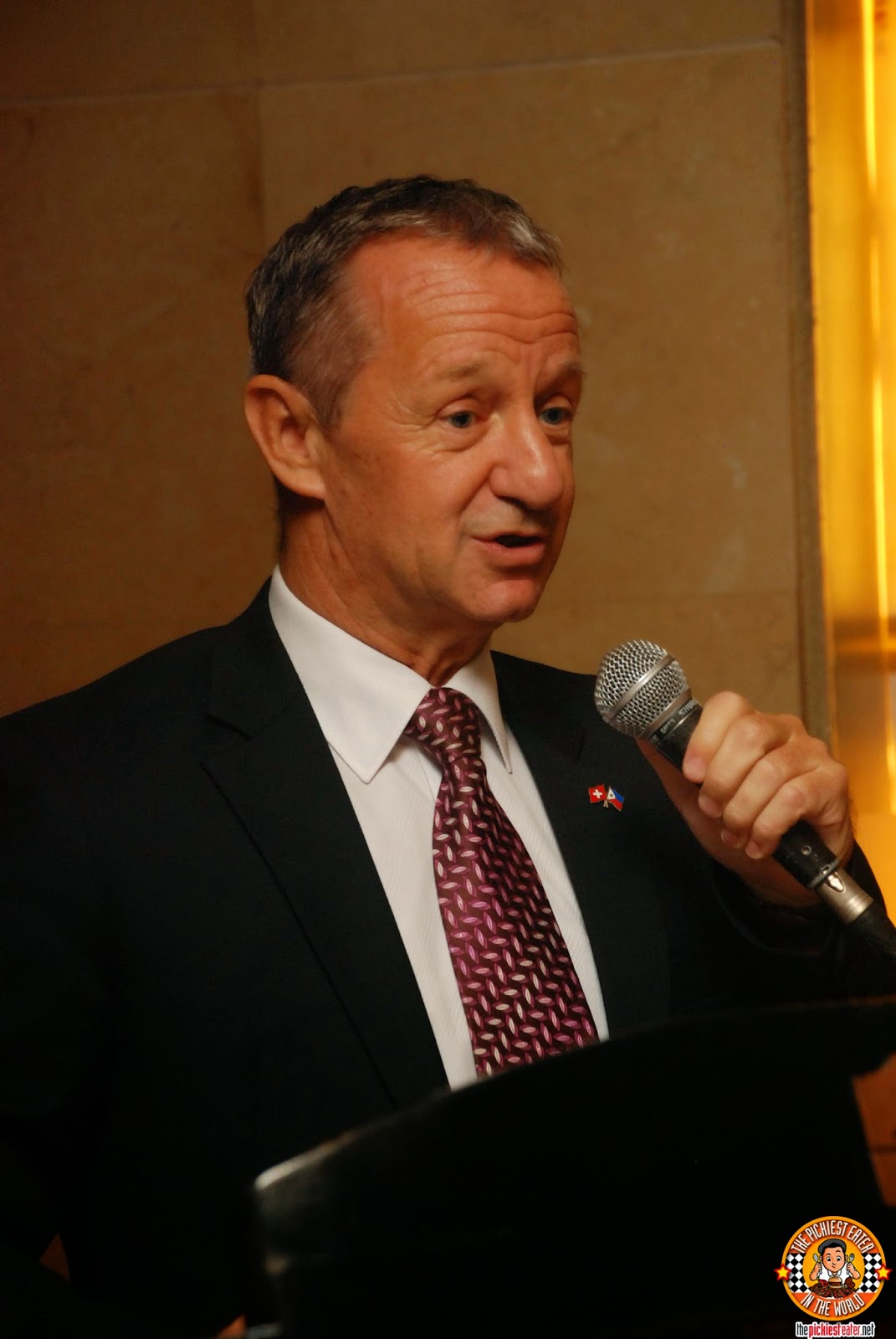 Before the meal began, we were greeted by Mr. Raoul Imbach, deputy head of mission of the embassy of Switzerland in Manila. Mr. Imbach played a little game with us, making us take a pop quiz on our knowledge on wine. Believe it or not, Rina won second place, taking home some Muesli Bowls! I think it was pretty awesome, especially considering that all her answers were based on guesses hehe.. 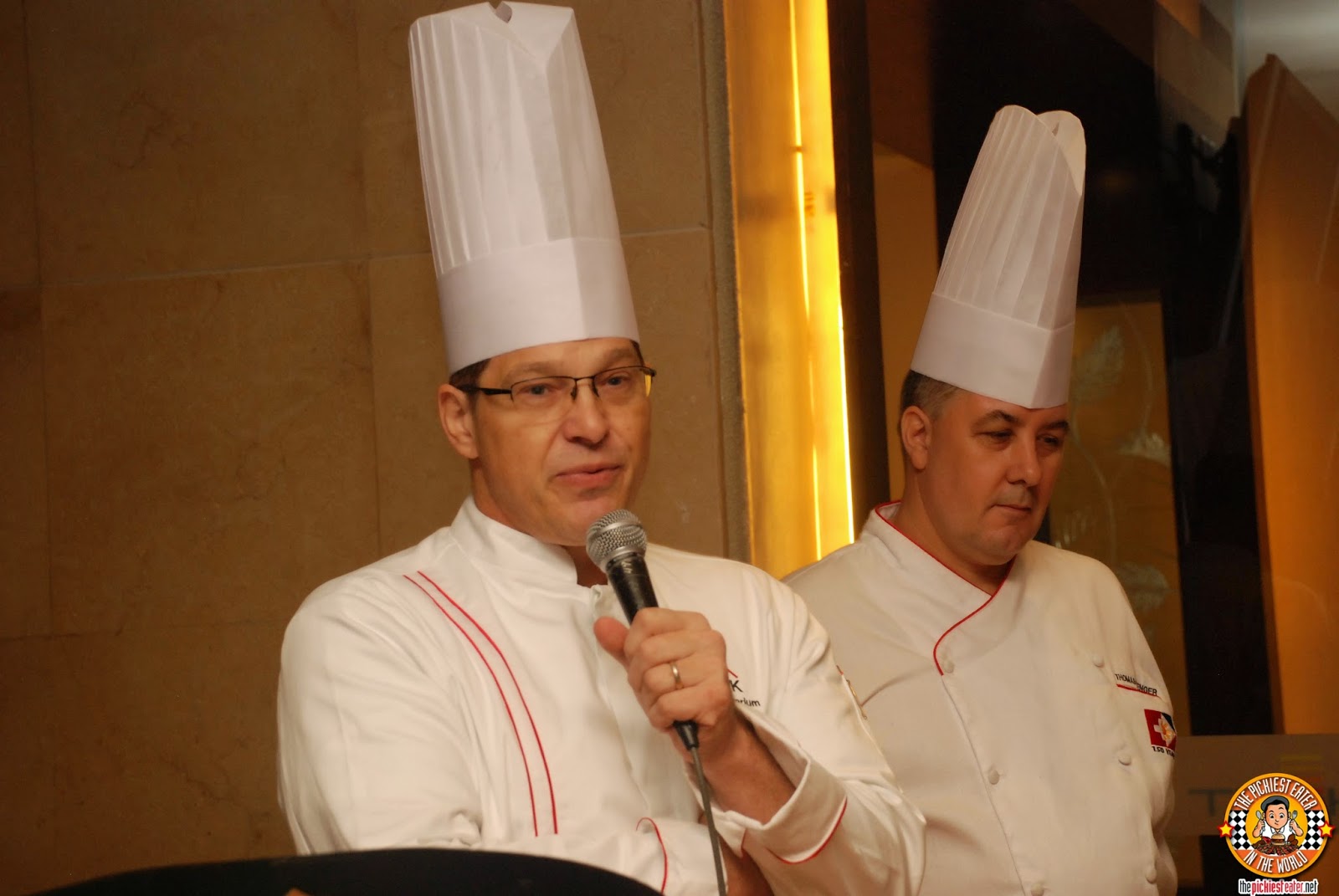 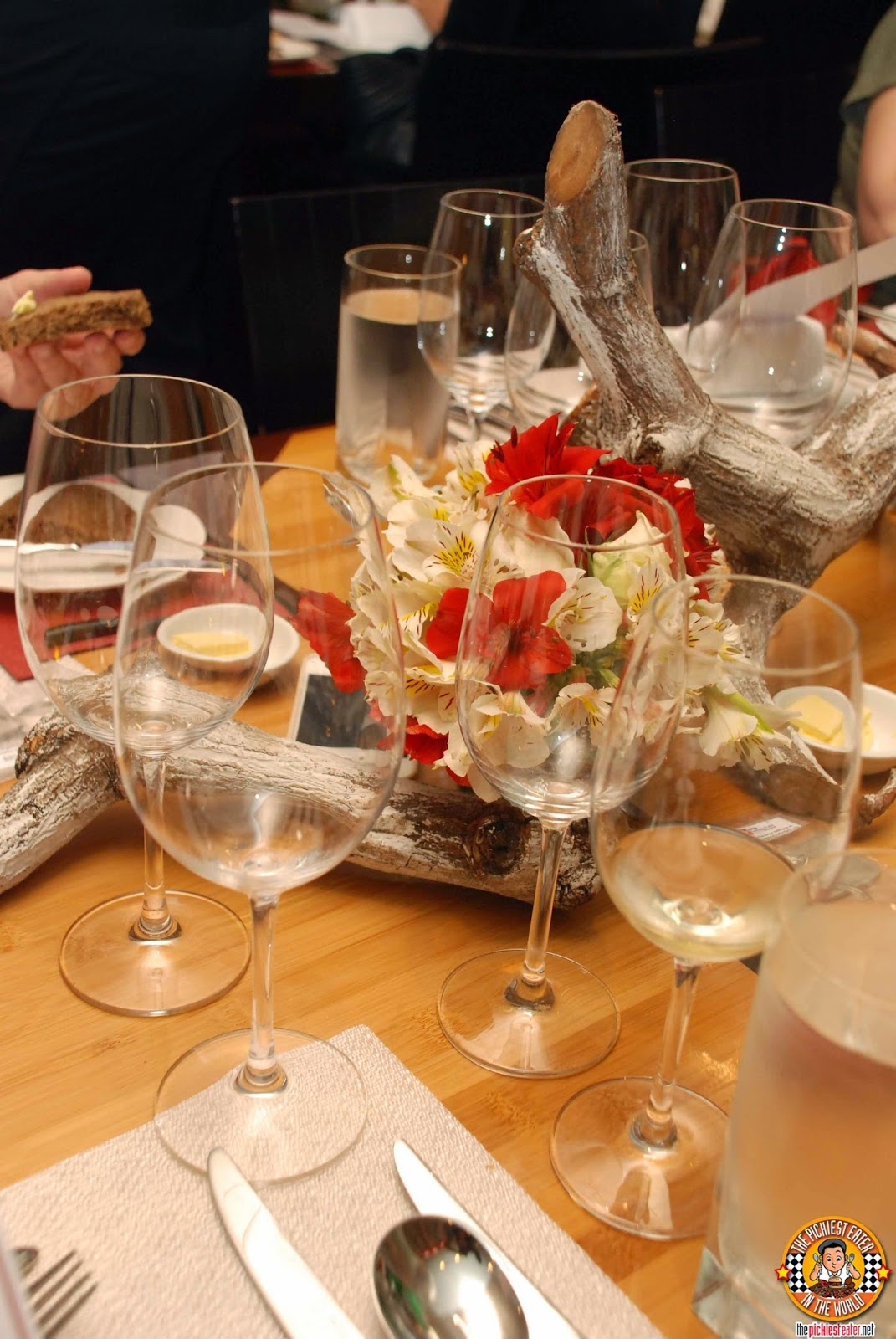 Something that Shangri-la hopes to bring to light during Swiss Week, is the excellence of Swiss wines which is often overlooked by its French and Italian contemporaries. Though out the lunch, our glasses were filled up one by one with a selection of Premium wines from Switzerland courtesy of Werdenberg, Inc. 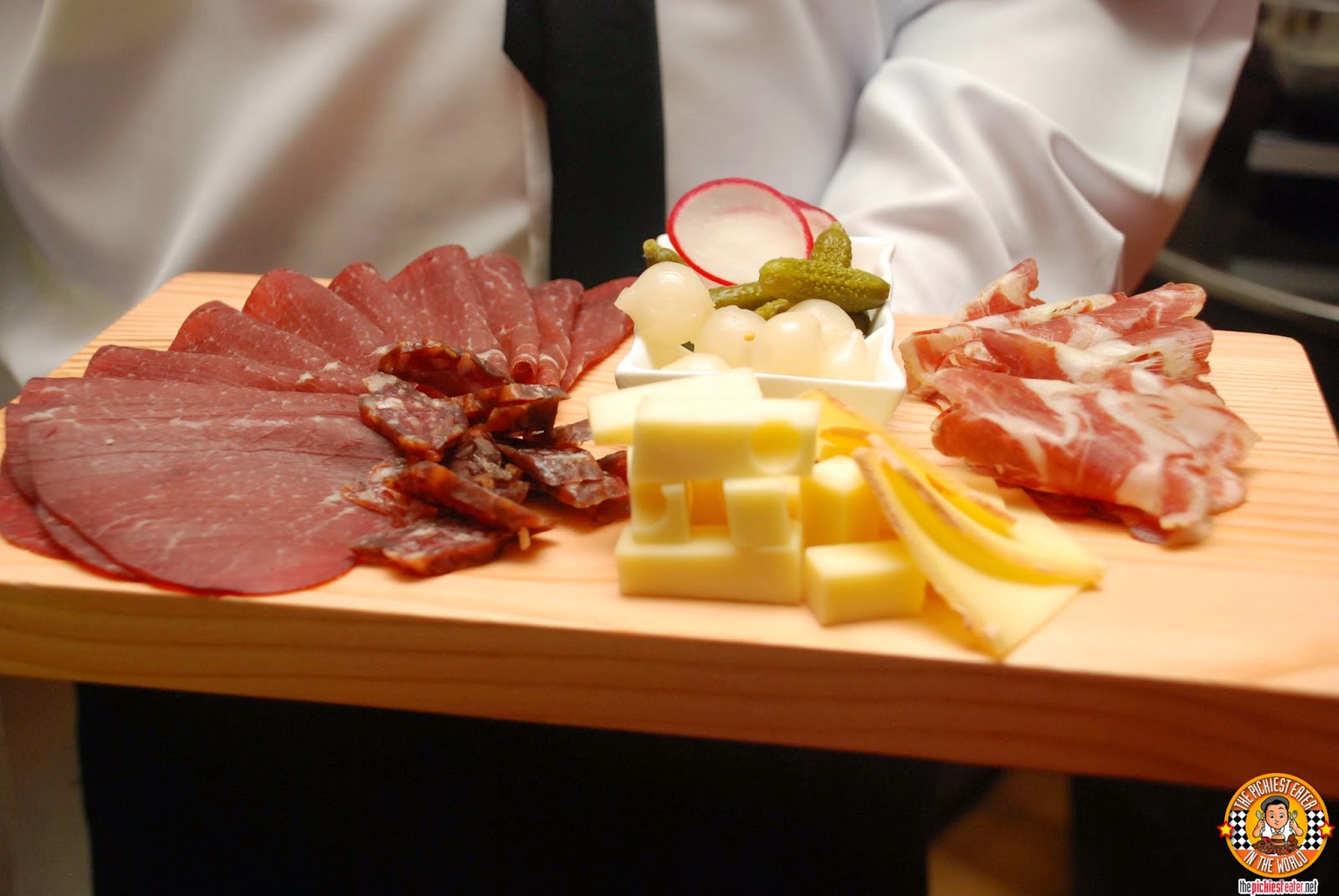 Vibrant flavors from the different cuts of meat that go wonderfully with the smooth, yet tasty cheeses. 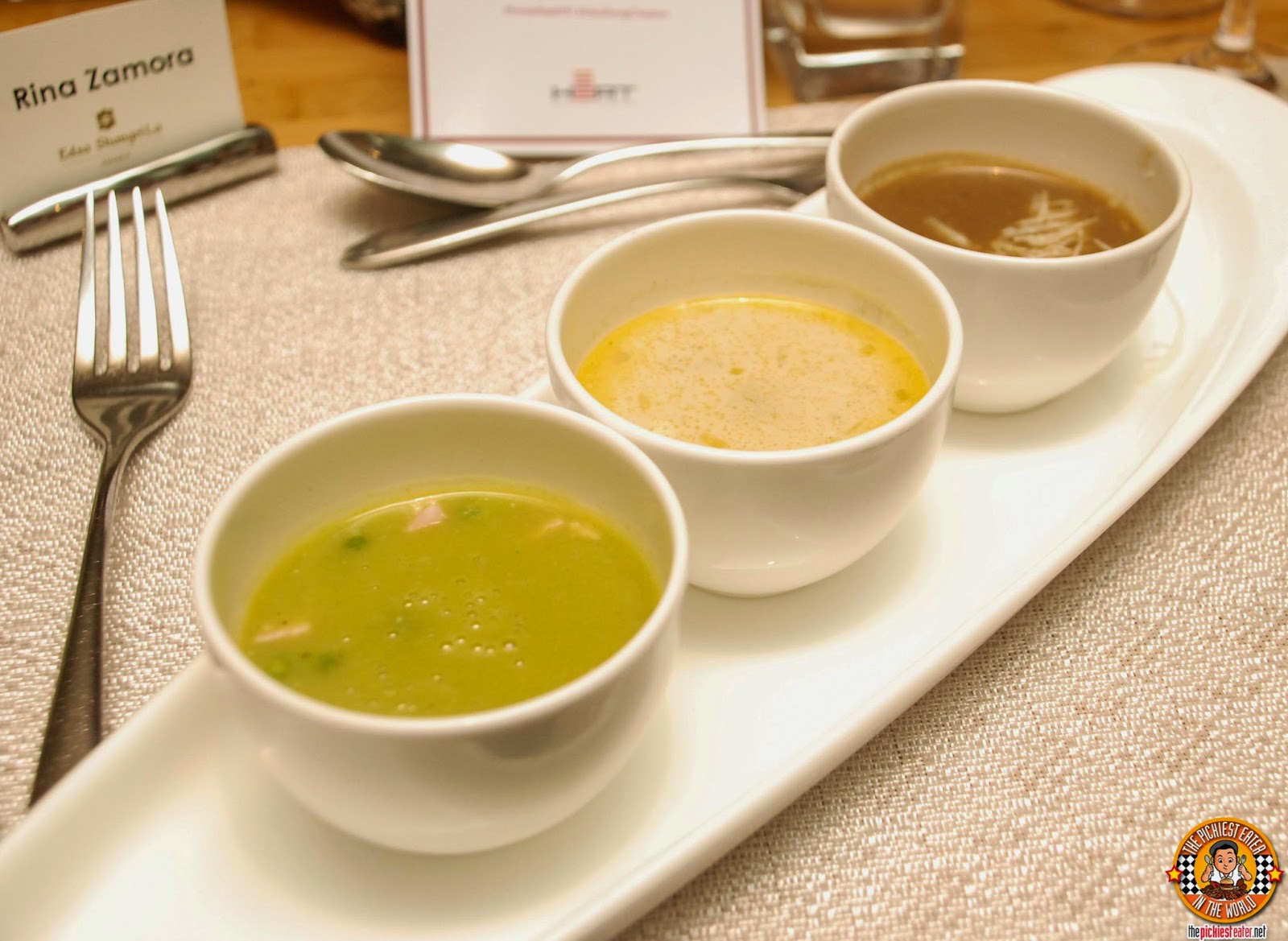 We were given a sampler of three different Swiss soups to choose from:

Bundner Gerstensuppe, a Barley Soup from "Grisons", the largers canton of Switzerland.

Believe it or not, my favorite among the trio was the Green Pea Soup, because of the presence of the Pork Knuckle, which was absolutely delicious. 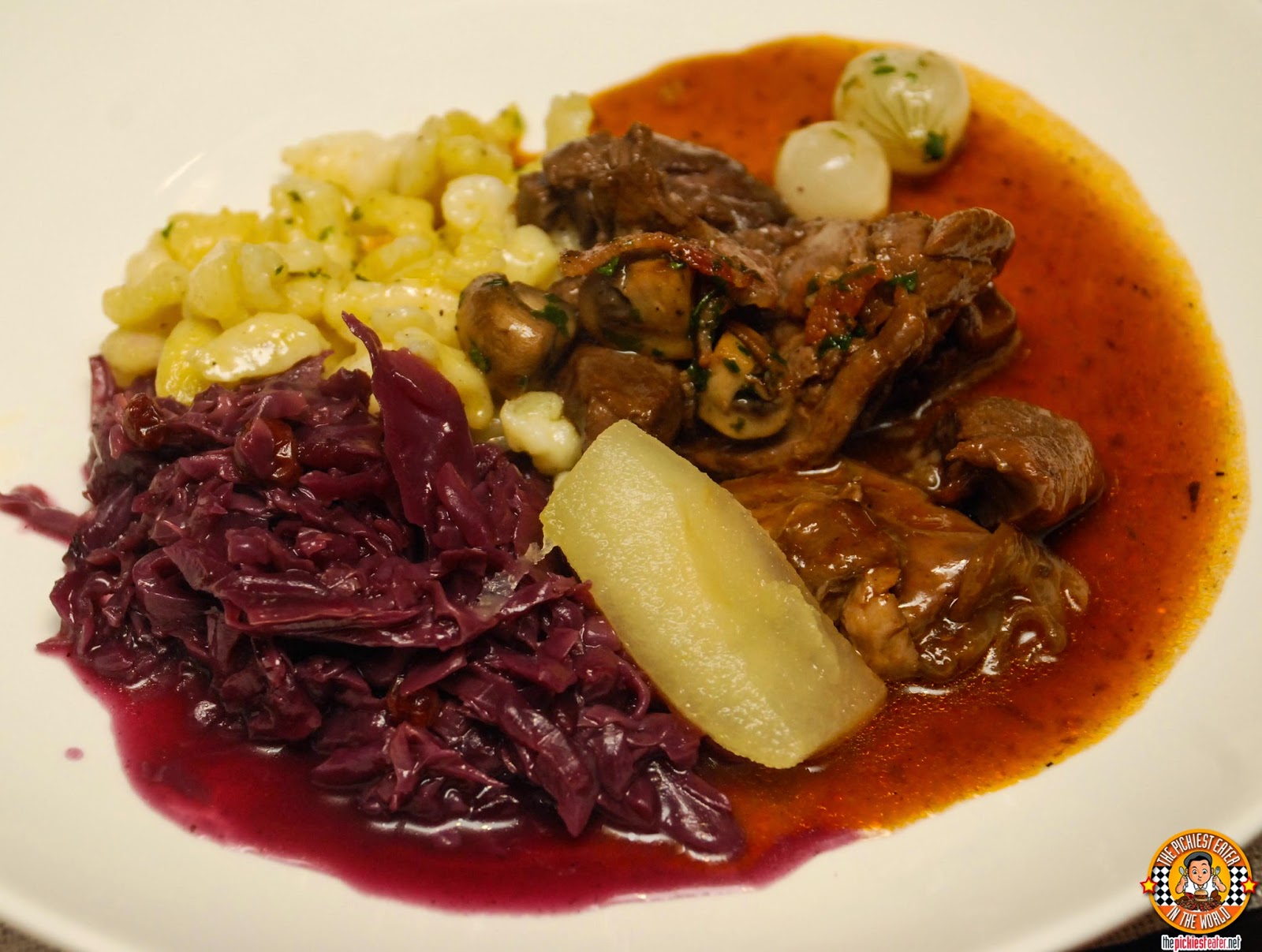 For the main course, we had the Venison Stew, done "Hunter Style", and served with a side of red cabbage, poached apple and a side of Spaetzli. This was my very first time to try Venison, and I can safely say that I'm not a big fan of it. I may be off base, but texture-wise, the meat felt a bit too close to liver for my liking.

Despite the fact that I wasn't too fond of the game, I must say that the sauce of the stew was impeccable. The saltiness of the stew paired beautifully with the subdued flavors of the Spaetzli and Red Cabbage Slaw. Had this been made with Beef, I would have been able to devour this entirely (As it was, I managed to finish off half). 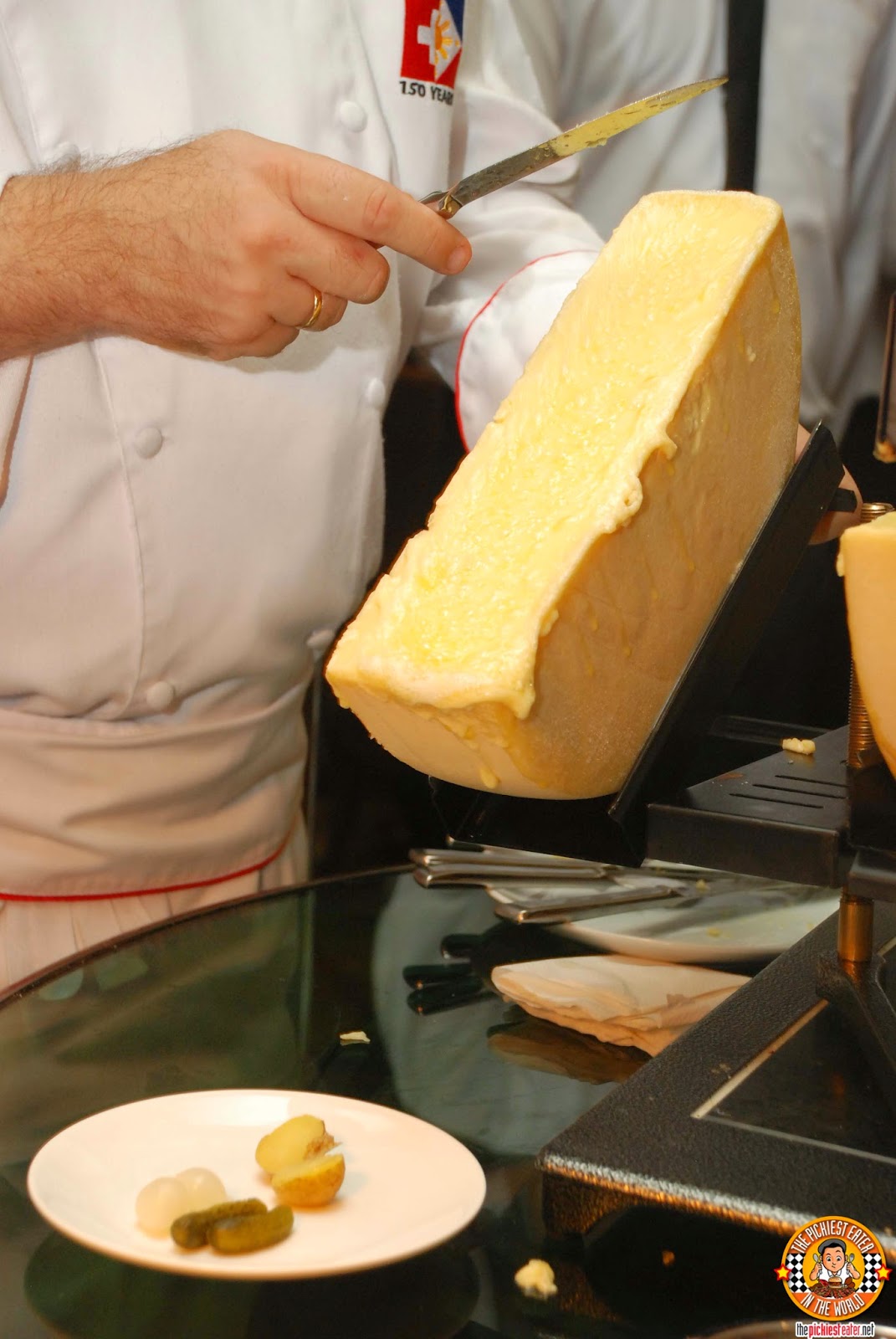 The highlight of the evening for Rina and I was without a shadow of a doubt, the Raclette Station. A slab of Raclette Cheese is set upon a heating lamp, until the edge is softened up.. 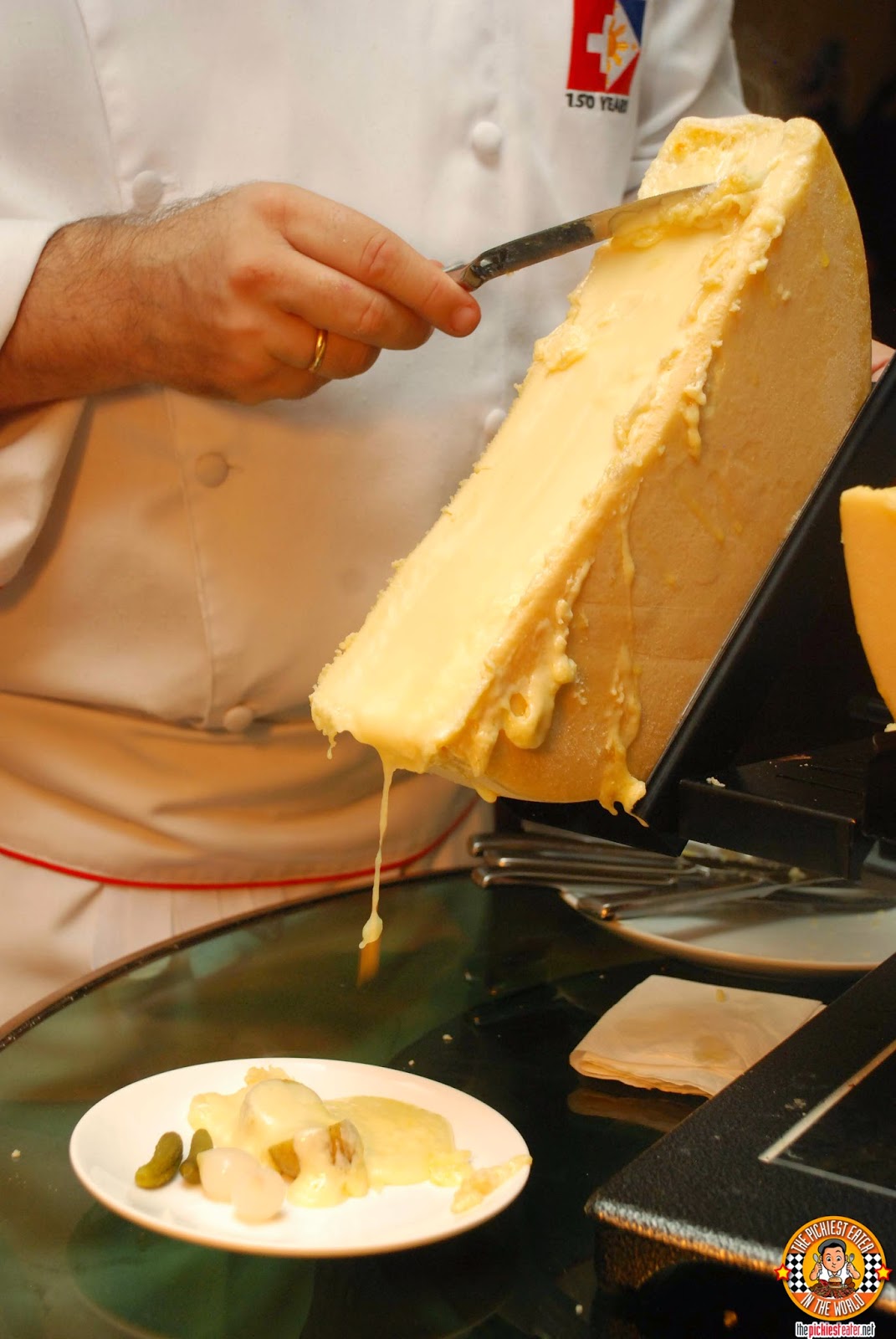 The gooey Raclette is then scrapped off into an awaiting dish.. I honestly wanted to ask them to do it straight into my mouth, but the waiter said it might be too hot for me (Killjoy). 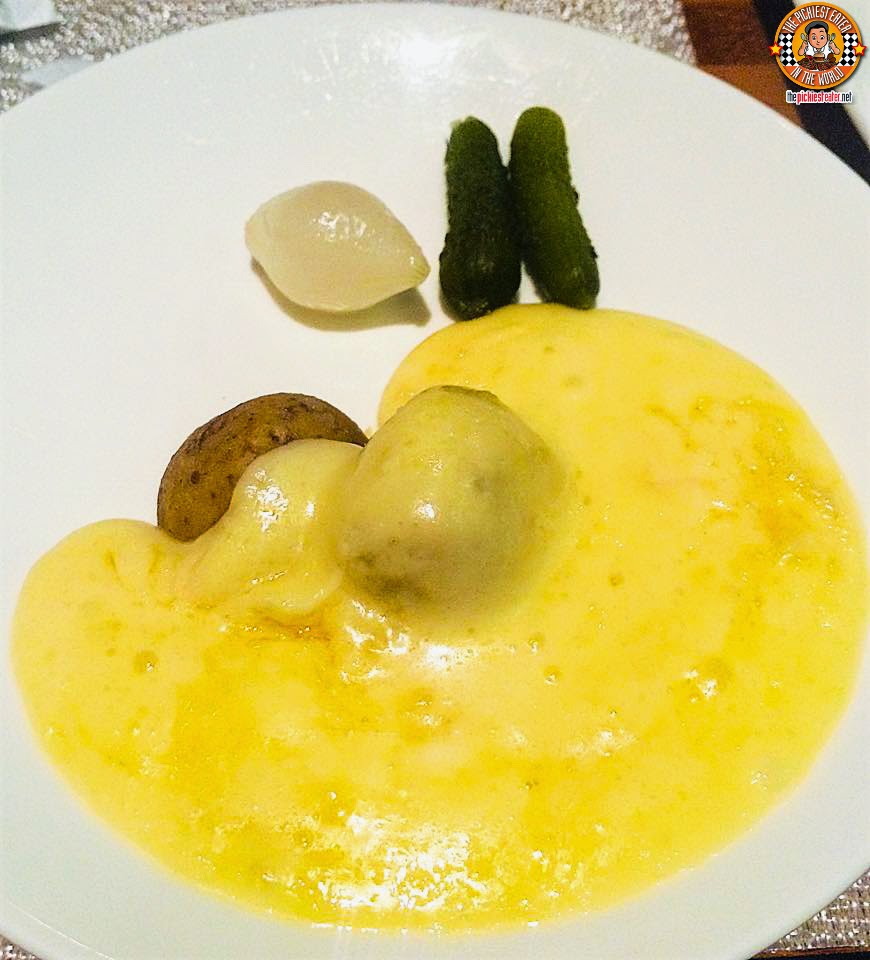 The Raclette has a distinct sharpness that Rina really enjoyed. The marble Potatoes helped temper the innate saltiness of the cheese, and the onion and tiny gherkins offered an acidic zing as an alternative.

No oke, Rina polished off five plates of these in succession, and totally forgot to take a picture of a single one with our DSLR. Good thing she took one with her iPhone hehe.. 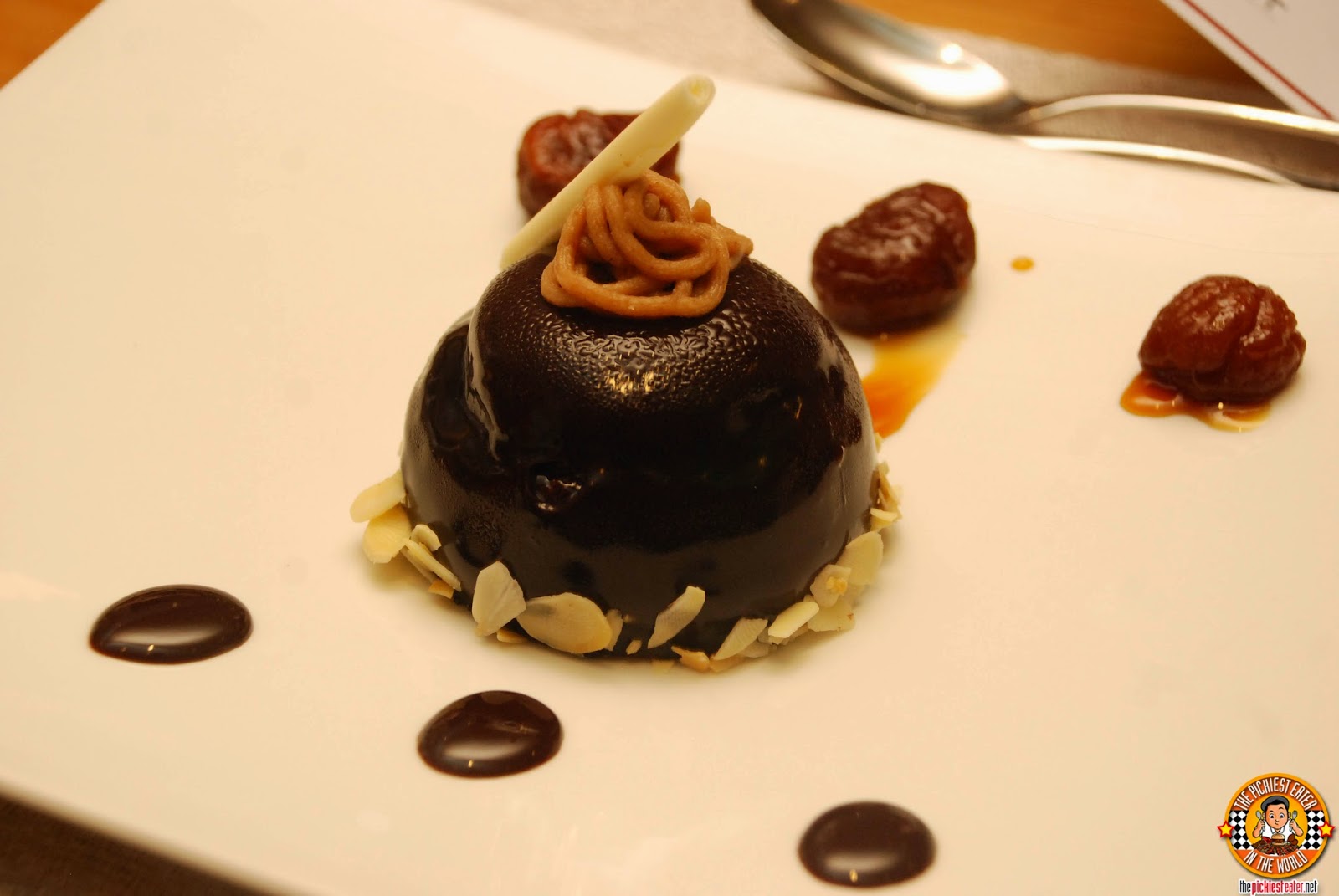 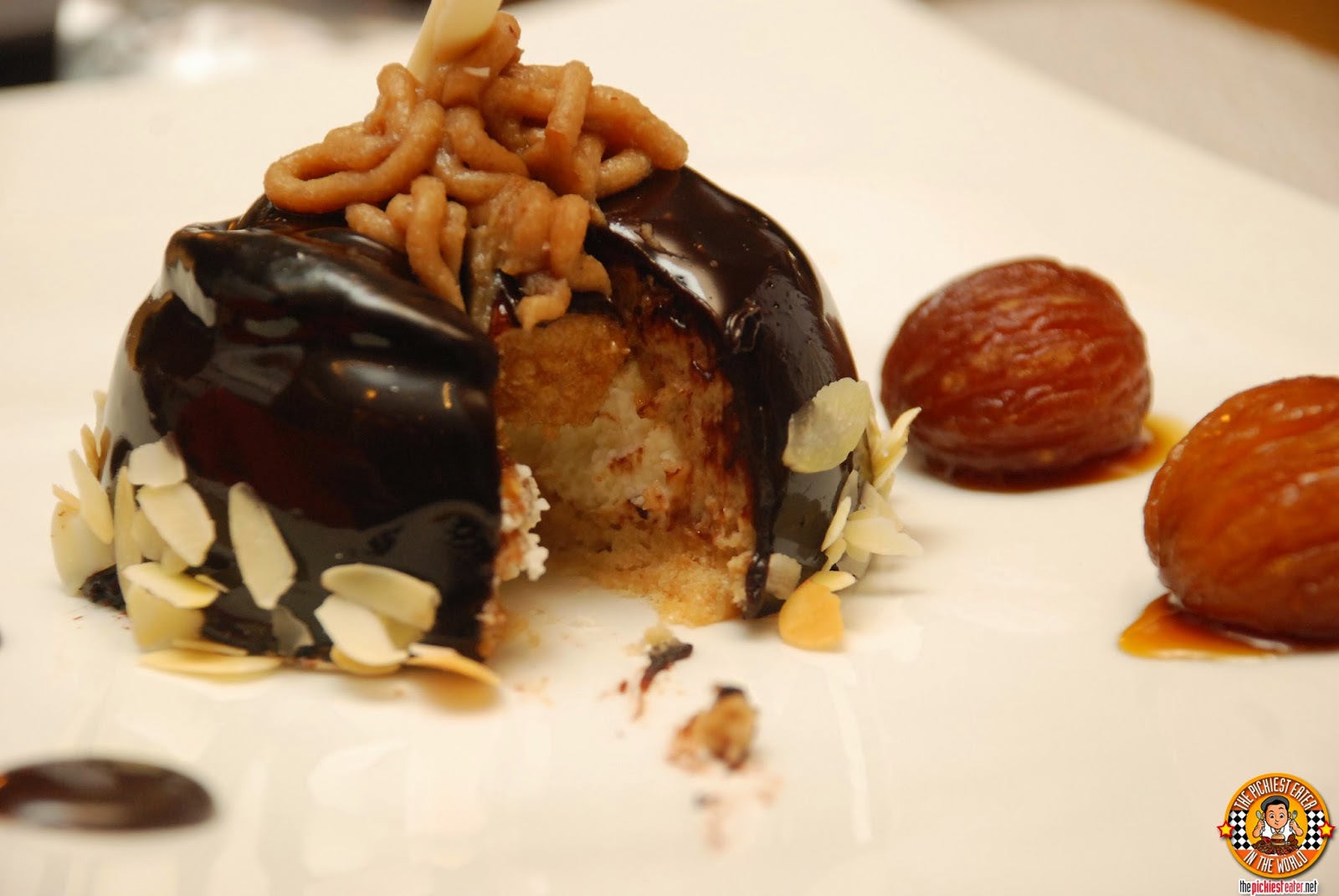 For dessert, we had the Vacherin Vermecille, which was delicious way to cap off a fantastic meal. Chestnut Puree, layered inside with Vacherin and covered with Chestnut Whipped Cream. I've never been fond of Chestnuts, but this was a great way to help me re-think my stance. 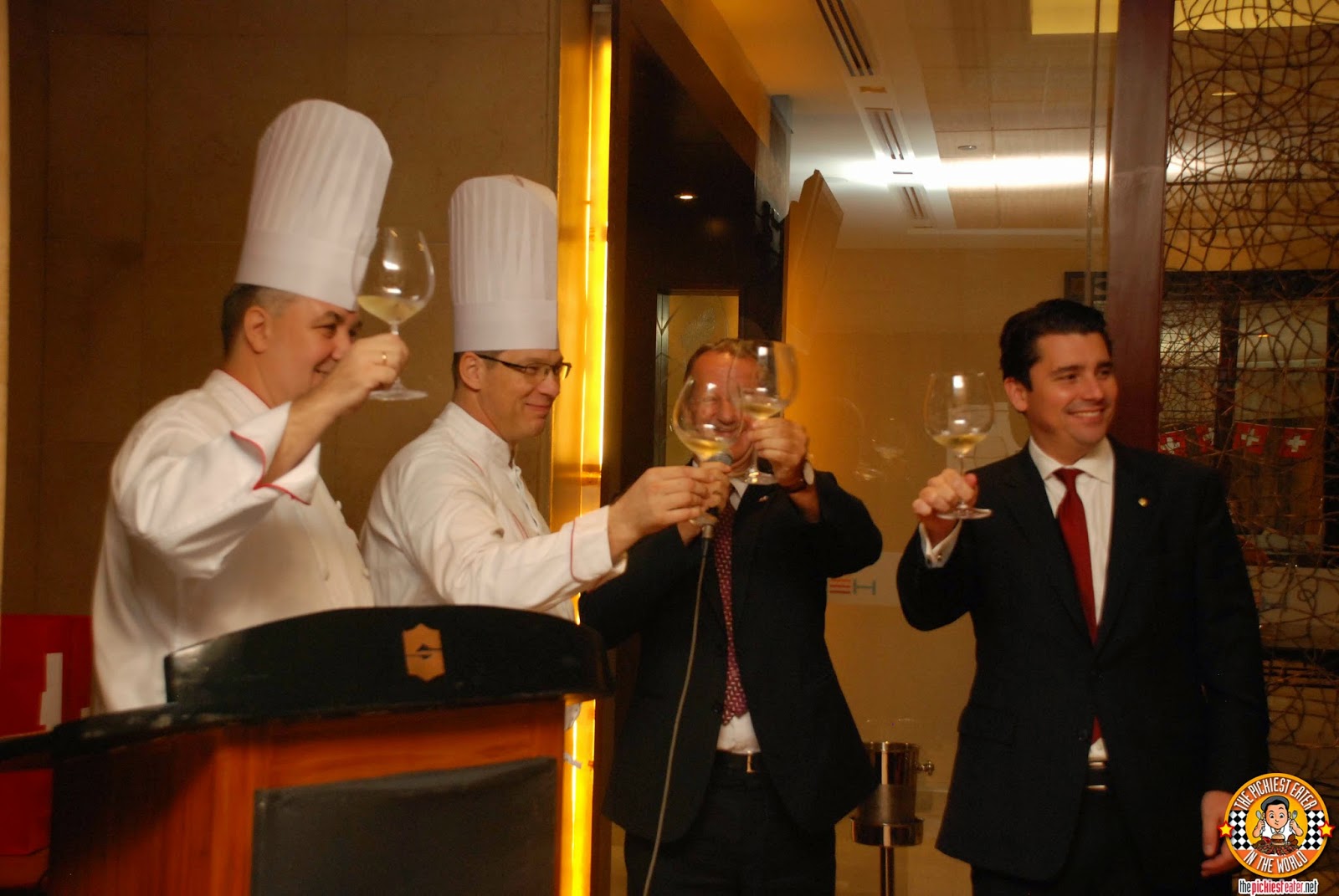 Live yodeling performances by talented Swiss Misses, direct from Switzerland, are in the program from November 18 to 23. Lunch and dinner rates start at Php1,790 net .

Edsa Shangri-la did a fantastic job in showcasing the amazing diversity of the Swiss Culture. And there is an exciting lineup of events coming up this week!

Don't miss out on it!

During Swiss Week in the Philippines, Lucerne will showcase Jaeger-LeCoultre ladies’ watches at Edsa Shangri-La, Manila’s Lobby Level, while guests are regaled with live demonstrations by a master watchmaker. On November 19, premium wines from Switzerland courtesy of Werdenberg, Inc. will be featured alongside masterpieces by national artist, Arturo Luz, during the hotel’s monthly Art of Wine event. A live yodeling performance is in the offing on this special evening. A four-course meal by Chef Robert Cauchi at Paparazzi is available at Php1,500 net, inclusive of Swiss wines for the tasting and hearty canapés that will be served at The Gallery during the Art of Wine cocktail. Other Swiss Week activities include performances by Swiss-born jazz artist Eliane Amherd in various jazz clubs and venues in Manila. There will also be a Swiss Week Musical Experience to be held at Rizal Park on November 22, featuring three musical acts fronted by Swiss groups: Eliane Amherd, the Swiss Yodel Ladies and Raoul and the Wild Tortillas. Swiss Week in the Philippines is also made possible through the efforts of the Swiss Cultural Fund – Philippines, Presence Suisse, SWISS International Air lines, Lucerne, Santi’s Delicatessen, Swiss Tourism Board and the Swiss Club. For bookings and inquiries, call 633 8888 or email at heat.esl@shangri-la.com. For updates and exclusive offers, follow Edsa Shangri-La, Manila on social media through Facebook.com/EdsaShangriLa and on Twitter and Instagram @edsashangrila. Cultural program information on https://www.facebook.com/SwissEmbassyManila or on http://www.swissculturalfundphils.org/events.php