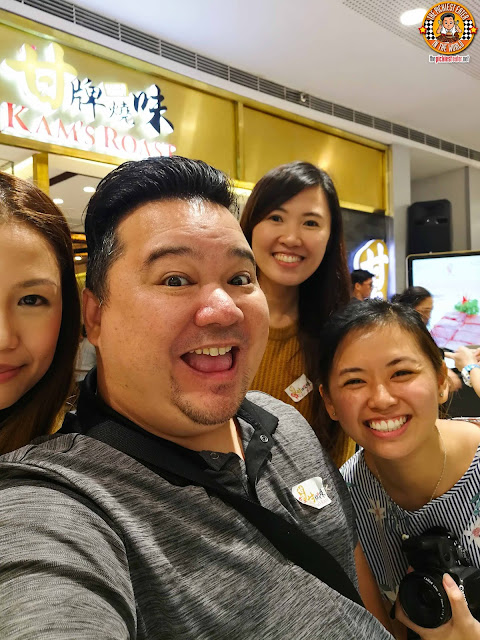 My KTG FRIENDS AND I ABOUT TO PIG OUT!!

It's not often that one gets to dine at a restaurant with Michelin Star lineage, so when Kam's Roast opened in our shores, I was absolutely ecstatic for the opportunity to see for myself why they got the acclaimed award in Hong Kong! 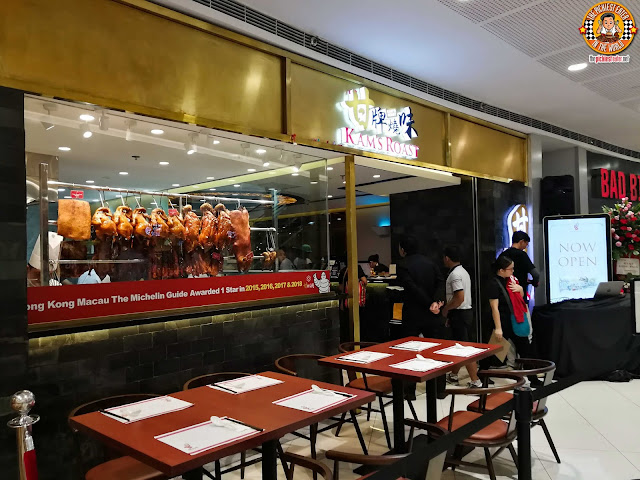 I'm not going to lie to you, when I found out that SM Mega Fashion Hall was the location of the first branch of Kam's Roast, I was actually quite surprised. Given that I expected it to be rather upscale, I thought it would go to somewhere like Shangri-la Plaza or Podium.

However, SM Megamall is known for attracting all walks of life from all classes, and considering the location being the center of everything, it made perfect sense. 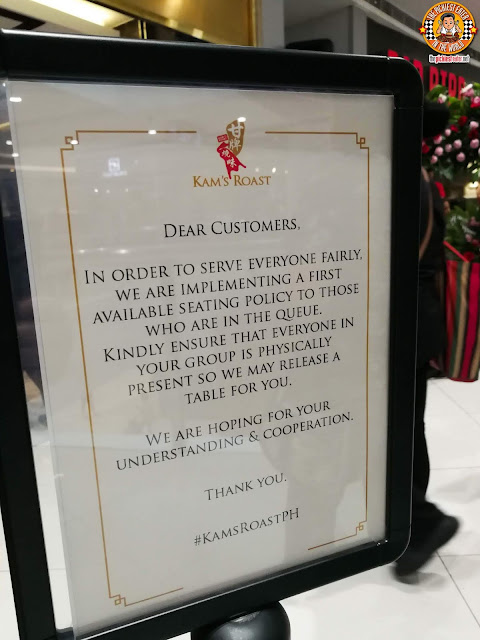 Apparently, any apprehension I had was totally unfounded, because as of this writing, people have been queuing up for a taste of the award winning meats. Thankfully, Kam's Roast has an efficient 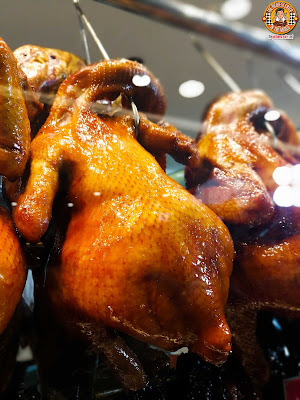 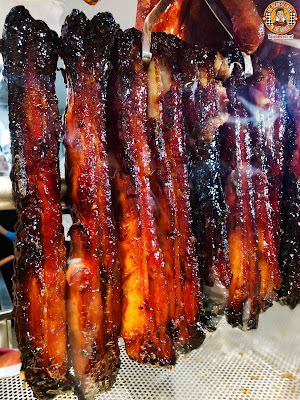 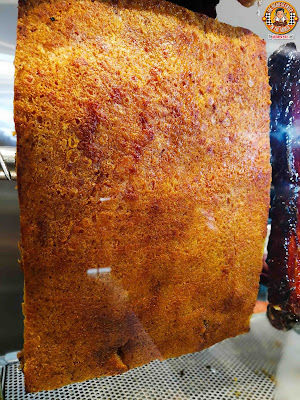 Even before entering Kam's Roast, you'll see the glorious cuts of meats on display from the window of their open kitchen, and it truly is a sight to behold. Watching the Chef slice the tender meats with precision and finesse only makes choosing what you want to order even more difficult. 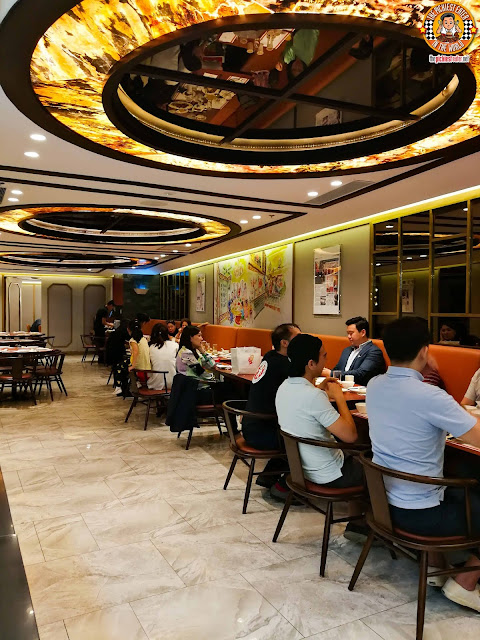 The restaurant itself has the opulence of a classy Chinese Restaurant, with Oriental touches incorporated in the decor, giving you a nice feel of the rich cuisine you are about to explore.

Some of the appetizers that they served were classic Chinese Cuisine items that wasn't to my taste, but my Chinese restaurant veteran companions swore by it. 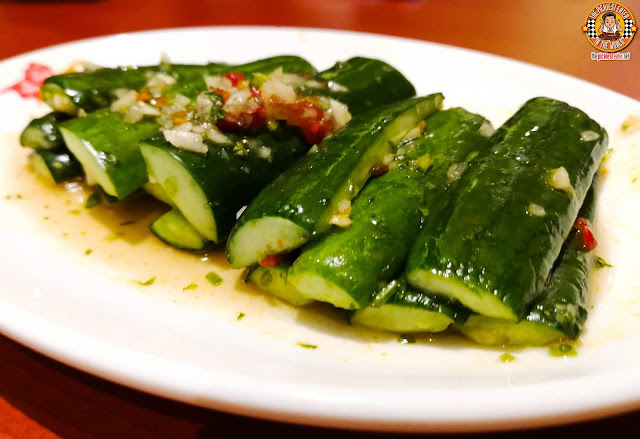 The first was the Marinated Cucumber with Vinegar and Garlic (P220) 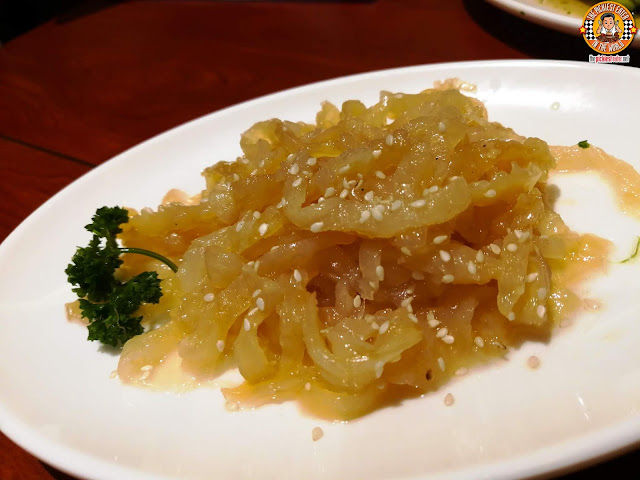 Second they brought out the Jellyfish with Sesame Oil Php (P350) 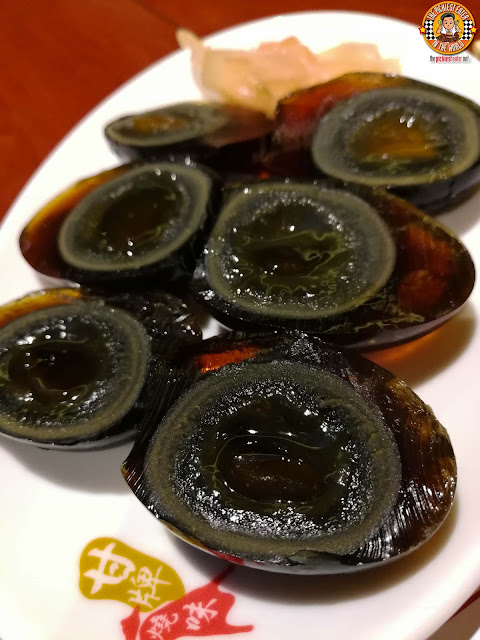 My companions absolutely loved the Salted Duck Egg (P80 per piece), claiming it was among the best they've had.

As the name states, if there's anything Kam's Roasts takes pride in, it's how they roast their meats. It's what thrust them into the limelight, and garnered them a Michelin Star. Whether it's their Signature Duck, Chicken, Or Suckling Pig or Cha Siu, everything that comes out of Kam's Roasts kitchen is meticulously prepared to tantalize your taste buds. 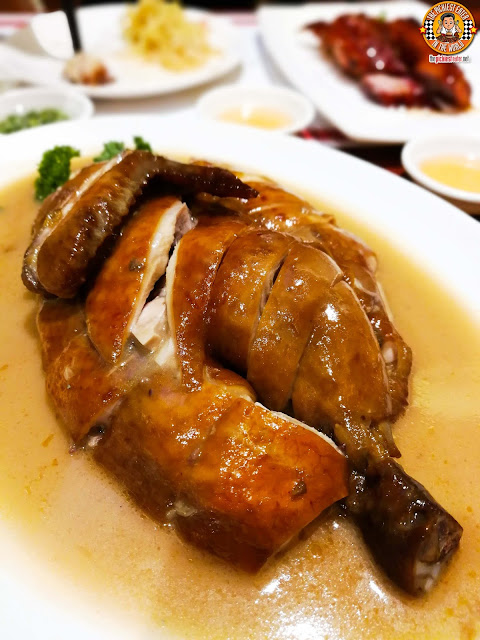 You can start off by enjoying their Soya Chicken (P500 Half/P980 Whole). It was remarkably juicy and cooked to absolutely perfection, with the skin displaying a gorgeous golden hue. The chicken is is also doused is a their gravy sauce, whose creamy notes plays wonderfully with the natural flavor of the chicken. 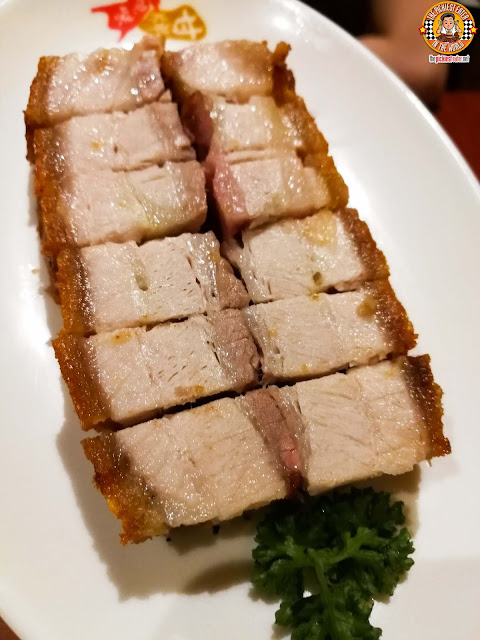 The next dish they brought out was the Crispy Roast Pork (P700), which was absolutely phenomenal. The seasoning of the meat was spot on, and the meat itself had an innate juiciness to it that burst into your mouth with every bite. 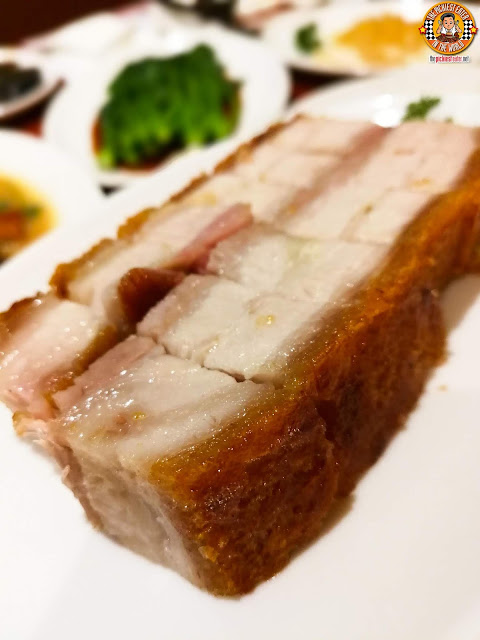 The skin was magnificent. It had a spectacular crunch to it when you bit down, and the lining of fat had the right proportion to the meat. I found it amusing that they served a side of mustard to it, but when I dabbed a bit of it on the pork belly, I saw how it worked well together, and was made an instant believer. 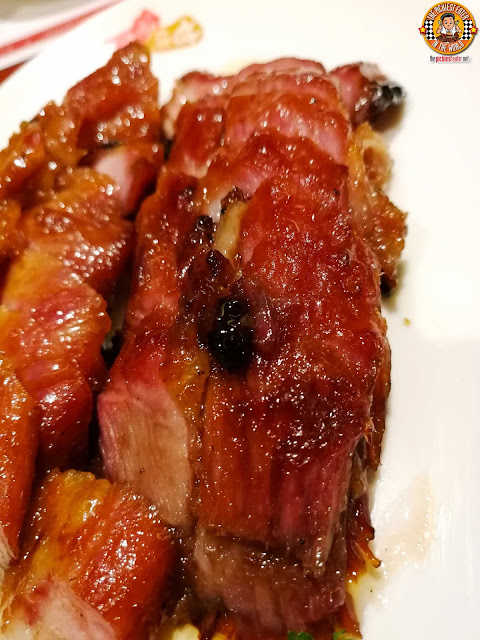 One of the dishes I was excited to try from Kam's Roast was their their trademark BBQ Pork Char Siu (P600), and I was not disappointed. It had a delicious sweet-smokey glaze around it, with the meat maintaining a marvelous savoriness.

But as delicious as it was, I found myself looking for a bit more lining of fat to it. 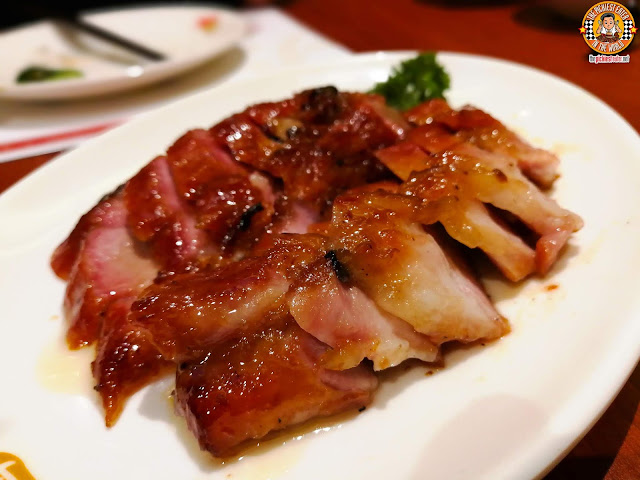 Apparently, that decadent fattiness I was looking for, could be found in the Toro Char Siu (P700). Though its slightly more expensive than the regular  BBQ Pork Cha Siu, the innate juiciness just made it all worth it. Don't get me wrong, the BBQ Cha Siu is delicious, but the Toro is a couple of notches higher. 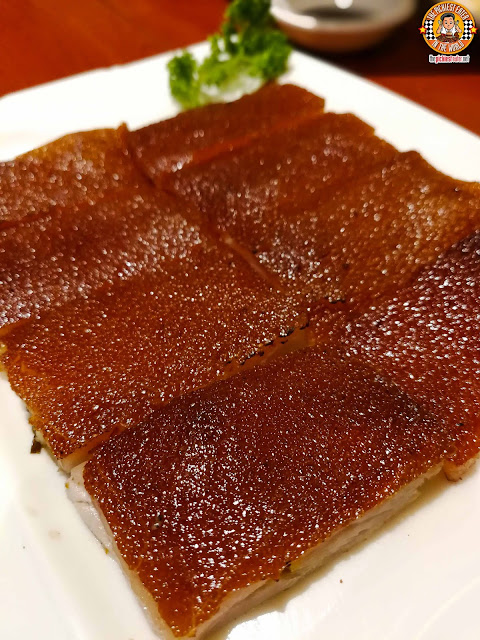 The Roast Suckling Pig (P800) was Eyes-Roll-To-The-Back-Of-Your-Head-Delicious! I didn't know suckling pig dishes such as this existed. 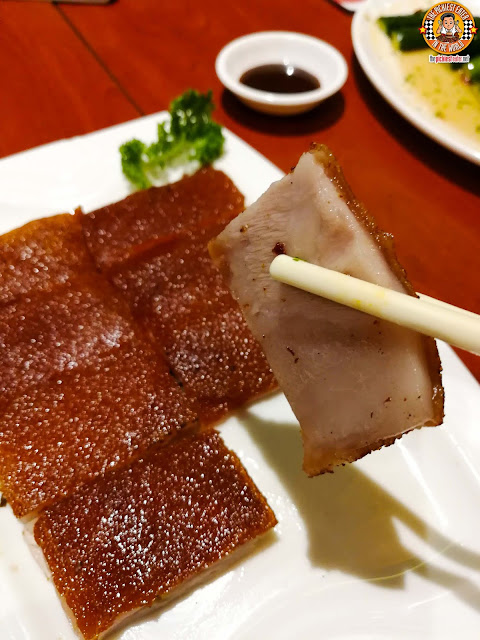 This is the first time I tried a Suckling Pig dish that consisted of two things I loved most in my Suckling Pig.. Skin and Fat. It's almost as if this dish was conceptualized specifically for me. The crackle of the skin was glorious, and the richness of the thin lining of fat was unreal, and as a true Pinoy, I found it best eaten with rice. 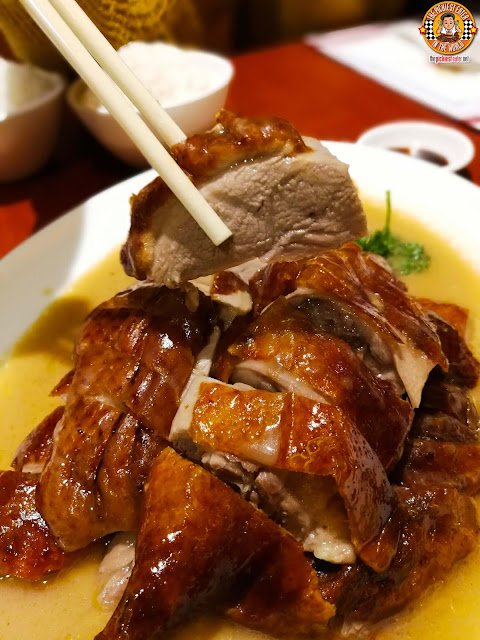 Sadly, Goose is not available in Kam's Roast Philippines, but what they do have, is an excellent Roast Duck (P750 to P2,800). The Duck was roasted to absolute perfection, with the skin cooked to a stunning bronze tone, and swimming in that rich gravy that I loved. 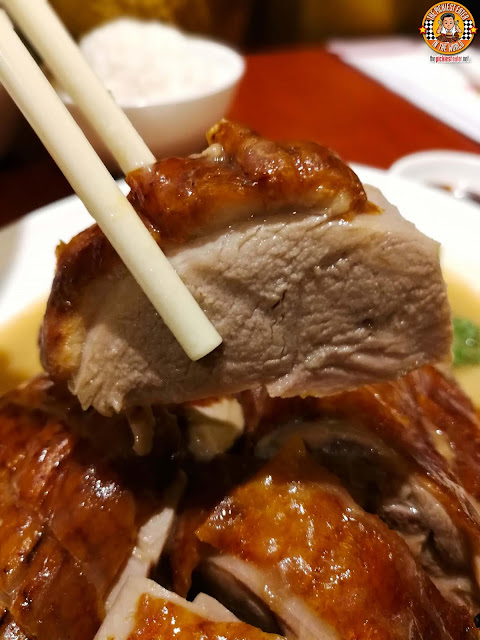 The meat was masterfully seasoned, and had a nice amount of fat that gave it a great juiciness with every bite you took. Definitely a must order when dining at Kam's Roast! 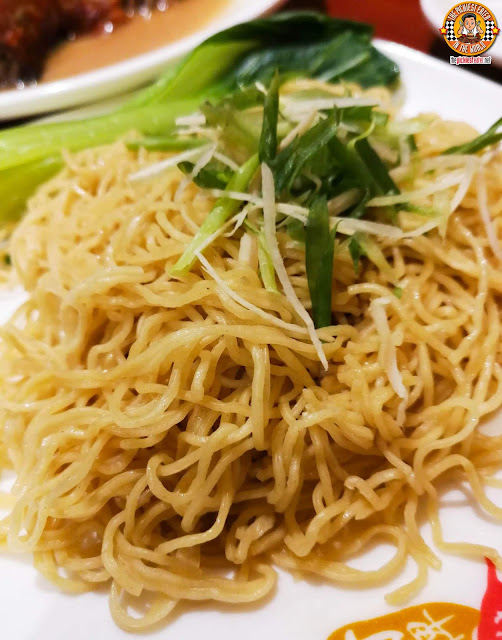 Although Rice is a must for me when eating roasted meats, I also enjoyed it with a side of Braised Noodles with Ginger and Scallion (P220). It was nice and flavorful, without overpowering the natural flavor of the meats. There's a Shrimp Roe version available, but I stuck to this one. 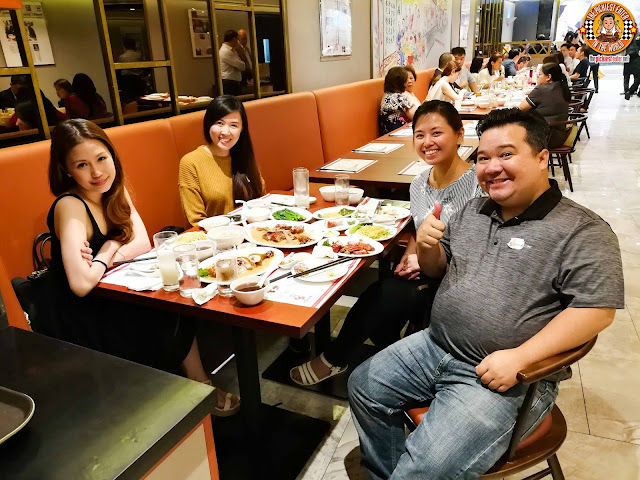 
Kam's Roast is quite pricey, but once you try their offerings, you see exactly where your money is going, making it an ideal spot to celebrate special occasions with loved ones. If you're looking for huge portions, I advise you to manage your expectations.

I visited a couple of months after their opening, and I must say, their service was running like a well oiled machine, so kudos to the staff for overcoming the opening day blues in a big way!