SCOTT BURGERS: THE RETURN OF THE COMEBACK 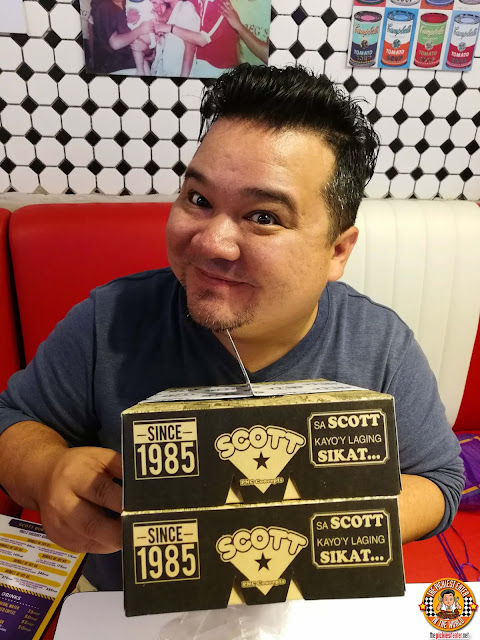 I'm not ashamed to let my age show so I'm going to tell you all now, college life for me began in the mid-nineties. During that time, Taft wasn't really the food haven that it has become now. The decent places to eat were few and far between. Whenever my classmates and I would find an acceptable restaurant, we would be quick to share our discovery with one another. There was one particular place that I remember my friends telling me they particularly enjoyed, and it shocked the hell out of me. It was this small stall underneath the stairs of the LRT, and I remember it so vividly because it had an iconic statue of a boy with his tummy hanging out of his too small shirt sitting on a barrel as he carried a huge burger over his head right in front of it.

And that's how I was first introduced to Scott Burger. I'm not going to lie to you.. I didn't try it. I distinctly remember that a burger was about P25, Buy One Take One. Admittedly, that was the very same promo that my friends were raving about, but the Picky Eater in mean refused to take the risk.

Cut to: More than 20 years later, Scott Burger is making a comeback in a BIG WAY, bringing in a their classic brand of burger for a New Generation. This time, I knew I couldn't pass up the opportunity to try the burgers, especially when I found out that it was infused with creations by Celebrity Chef Sharwin Tee!

Scott Burger began in 1985 by Mr. Gregory Ty, but it was in 1991 when they created a burger craze with their "Buy One, Take One" Promo. Since then, Scott Burger faded out of the limelight, but it's presence was still felt.. Although under different names.

Fast Forward to 2018. Greg's nephew, Lloyd Lee and his lovely wife Shamcey, took it upon themselves to spearhead Scott Burgers renaissance. Using their experience as proprietors for the restaurant chain "Pedro and Coi", they decided to revive his uncle's iconic creation.

From humble food stalls scattered across the metro during the 80's and 90's, Scott Burger is exploded back into the scene, with it's own brick and mortar diner style restaurant at Uptown Mall at Bonifacio Global City. 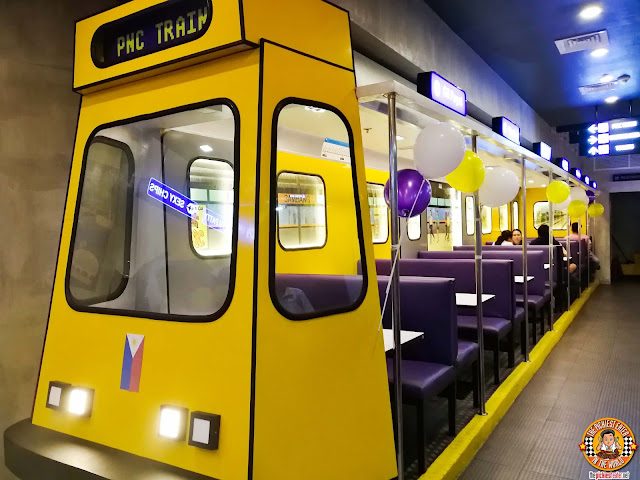 Perhaps the most impressive structure in the store is their mock up of the LRT that make up the dining booths. Lloyd explained that the names of the LRT stations listed above the booth represented the route he and his mom would take when he was young, as they were visited their Scott Burger Branches one by one. 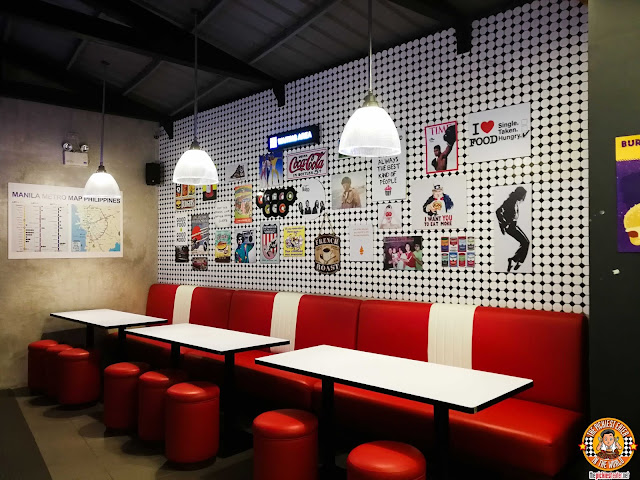 The  other side is speckled with 80's Nostalgia decors, completing your trip down memory lane.

CHICKEN WINGS
6pcs P195/ 8pcs P375
Kicking off Scott Burger's transformation to a full fledged American Style diner, is the addition of Chicken Wings to their menu, including a variety of flavors developed by none other than Celebrity Chef Sharwin Tee! 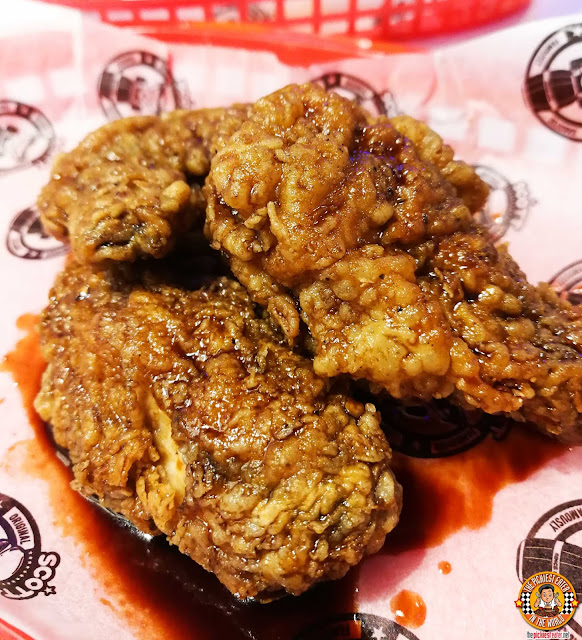 Among my favorites were the Honey Soy, Scott Burger's answer to the Korean Chicken Craze. The Honey Soy had a crunchy, golden exterior that was beautifully glazed by the lightly sweet sauce. 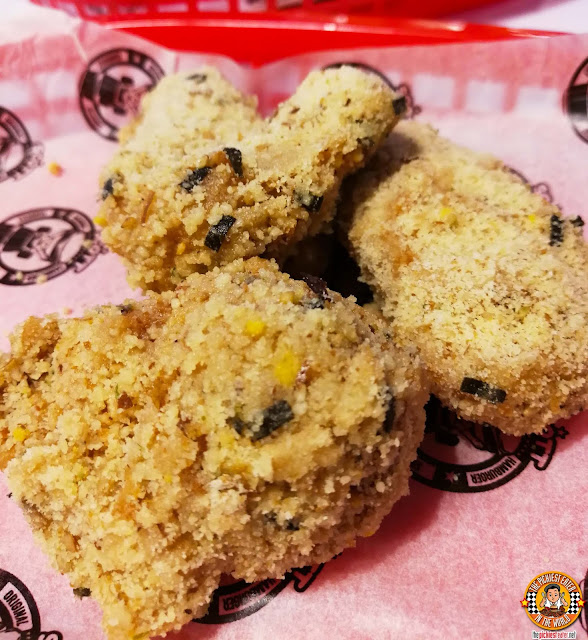 Cheese Lovers will definitely get a kick out of the Cheesy Kaiju Wings! Deliciously golden fried Wings are coated in a medley of shredded cheeses and herbs that complimented the nicely chicken meat. 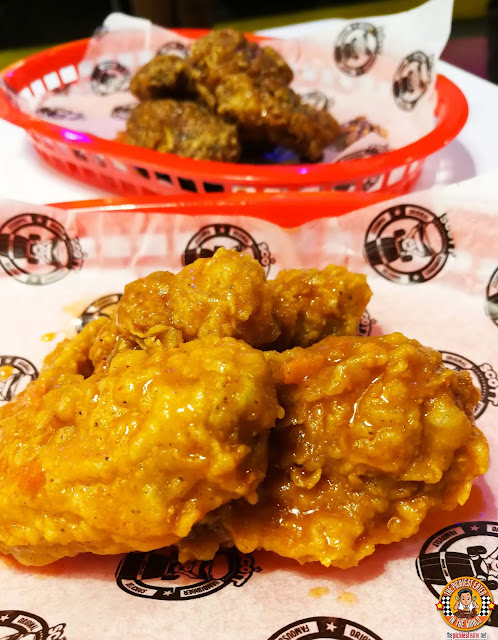 If you like your wings the classic style, then Buffalo Hot Wings is the way to go. It's got the buttery yet acidic zestiness that you look for in your Buffalo Wings, with the kick of spiciness that elevates the flavor. 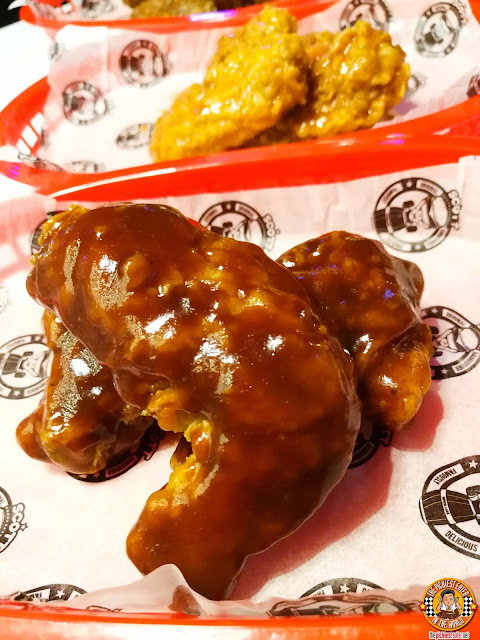 The Apple Hoisin Wings was a unique, yet delicious addition to the menu. It had a light sweetness that was balanced by the addition of hoisin, creating a thick coating around the crispy skin of the chicken. I think its imperative to eat this with Rice! 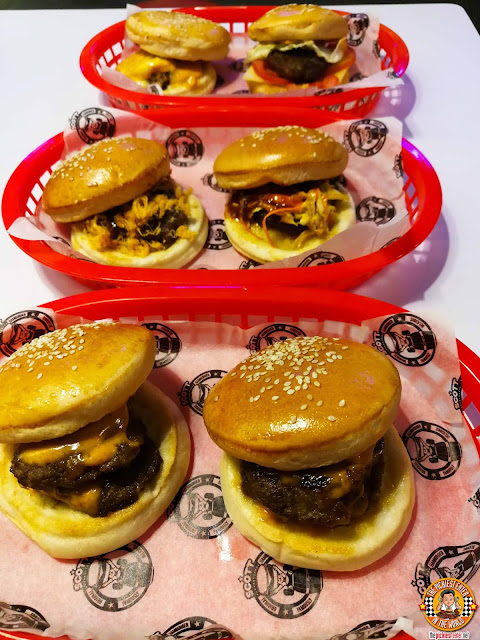 Of course, it's the burgers that helped Scott Burgers earn its place in Philippine Nostalgia. The original recipe for the burger patty was retained, but elevated by using a Wagyu Beef blend, giving it an even meatier flavor. Another thing you should know about Scott Burger 2.0: They now use Brioche Buns! Sosyal!

But Lloyd knew that bringing Scott to a new generation would call for more than beefier patties and better buns.. So again, he asked the brilliant mind of Chef Sharwin Tee to concoct a whole new line of of Burgers to go with the riginal incarnation! 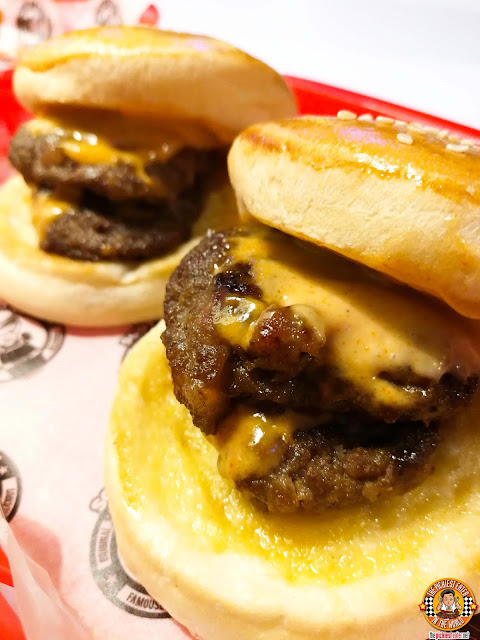 The Original Scott Burger (P75 Single/P105 Double) is the OG of the lot. The first thing you'll notice about Scott Burgers are the size. It's closer to a slider than it is an actual burger, but it's packed with meatiness so you get a great bang for your buck. One thing you should be aware of though.. The mayo dressing that they use have quite a kick of spice to it! 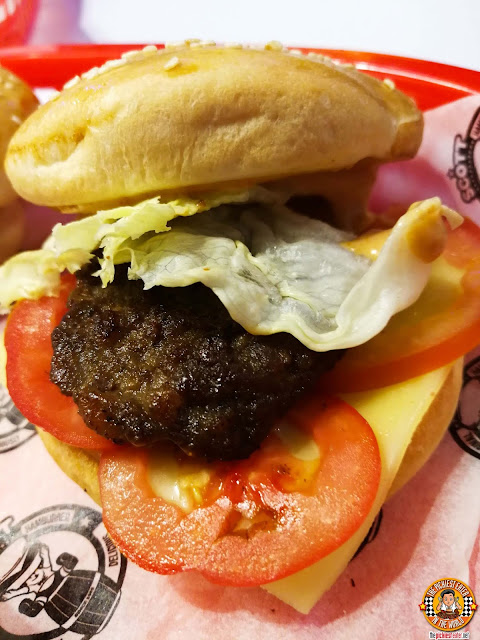 Scott Burger added a little Tender Lovin' Care to their burger, as they unveiled the TLC. This is basically the Original burger, garnished with the classic fixins.. Tomato, Lettuce and Cheese. 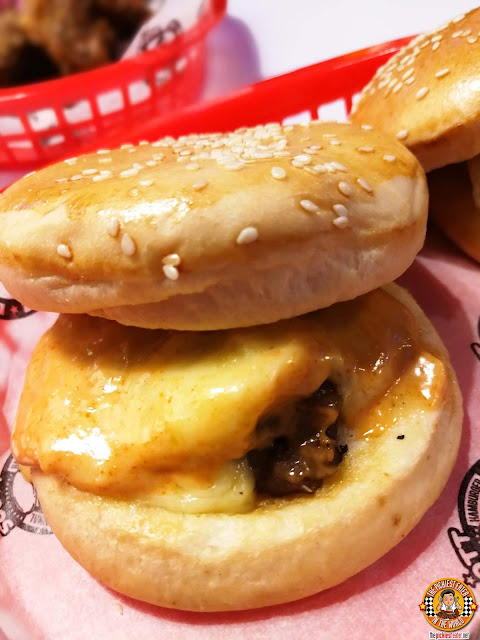 In my opinon, Cheese is an essential part of a good burger. The Cheesey Lover Burger takes that notion, and amps it up by adding two types of melted cheeses on to the patty, creating a blanket of deliciousness over the meat. 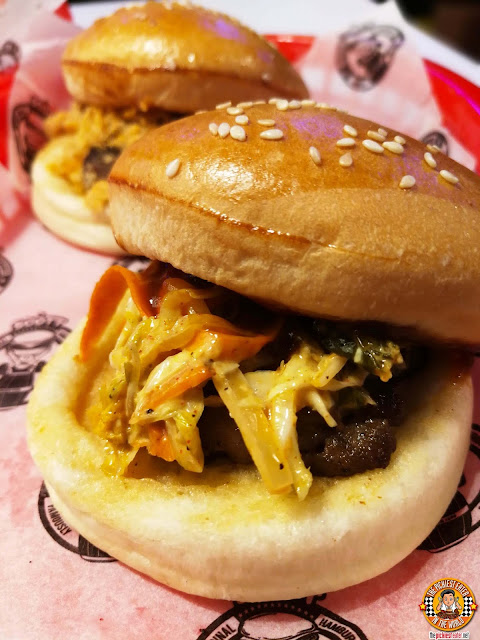 Scott delivers a delicious East-Meets-West Burger in the form of the BBQ Bang Burger! The burger is slathered in a house made BBQ sauce, then topped with a Kim Chi Slaw giving you amazing flavors from both hemispheres, that work seamlessly into your taste buds. 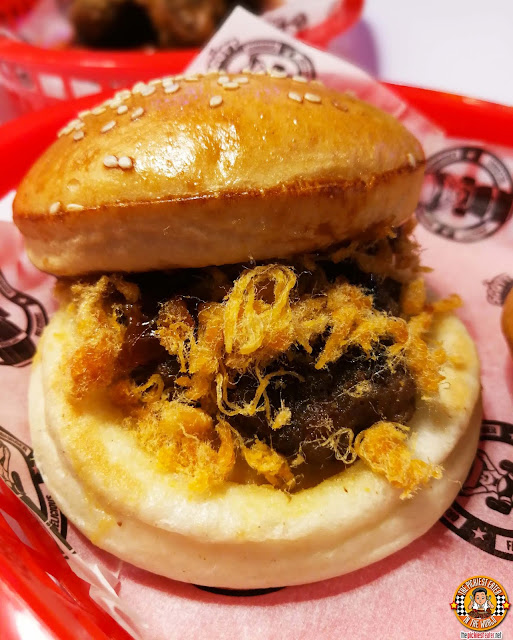 The China Town Burger gives you a very oriental feel, using the delectable Apple Hoisin Sauce that is also used for the wings, and topping it with delicious Pork Floss! 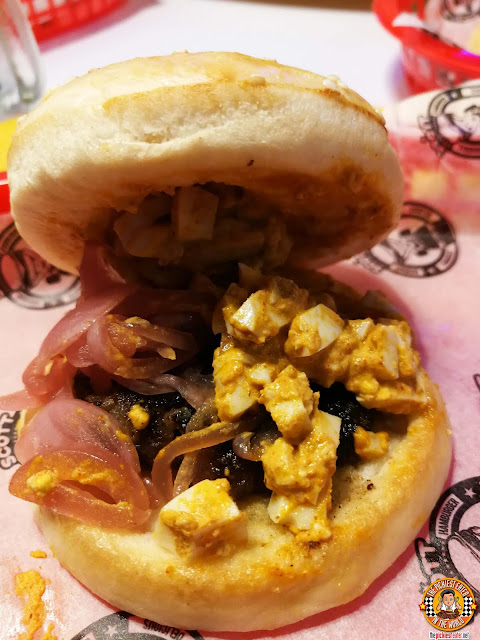 You know how burger places seem to just plop an egg on their burger, and "Viola!", they call it a "Breakfast Burger" or something to that effect? Well, I was impressed with how Scott didn't cop out with Good Morning Burger by going that route. Instead, the burger is topped with Salted Egg Salad and Pickled Onions, giving your palate a playful tickle of textures and flavors that belies its ridiculously affordable price. 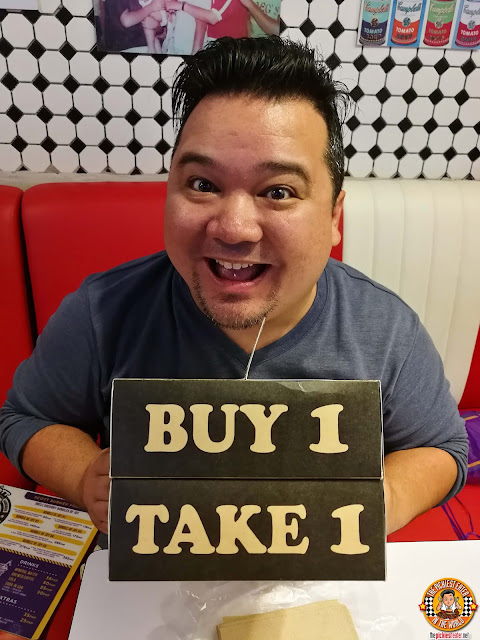 The innovations to the menu were nothing short of genius (I wouldn't expect anything less from Chef Sharwin), and should help usher in the next generation of diners to appreciate the Scott Burger legacy! Remember It's best to take Scott Burger for what it is.. And affordable and delicious burger alternative! And I'm sure we can all appreciate that! 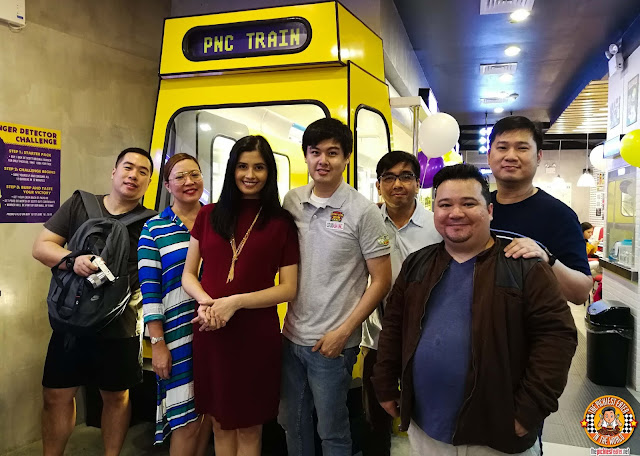 Congratulations to Lloyd and Shamcey Lee for bringing Scott Burger back not just to Pinoy Pop Culture, but to making sure that it makes its mark in the restaurant business! 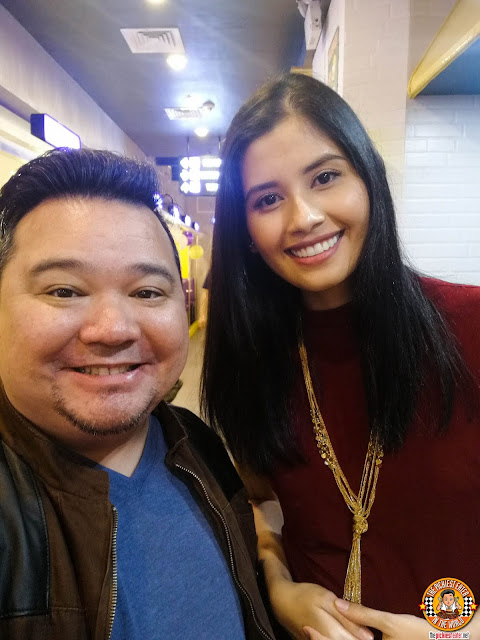 Side note, Shamcey, a former Bb Pilipinas-Universe, is still a stunner even if she's a few months pregnant. Ironically, I look more pregnant than she does. 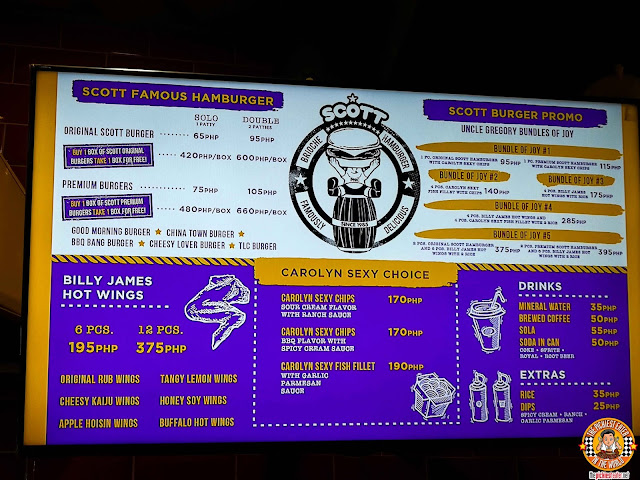 Posted by The Pickiest Eater at 11:57 AM