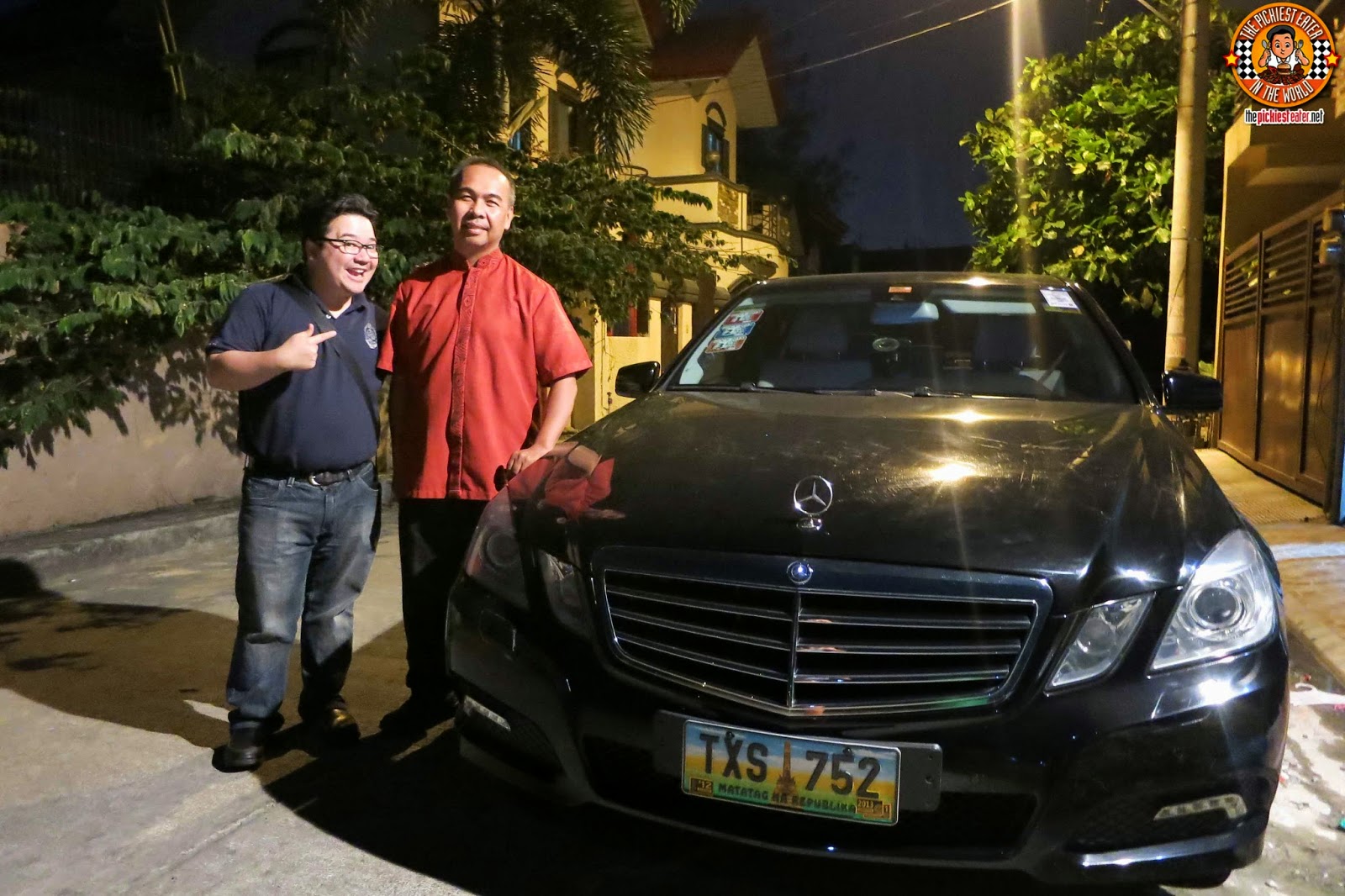 "*Grumble*.. uh.. He-.. Hello?", the groggy voice on the other line said. I knew my wife was already sleeping, yet I couldn't resist. "Meet me at the front of the house in five minutes", I said. "Oh, and don't forget to bring the camera".

As I arrived, the shock on Rina's face was evident. She was clearly wondering which Celebrity or politician pulled up to her gate. Much to her surprise, it was little old me.

That was my very first Uber Ride last March. I haven't taken a regular taxi since.

Like everyone else (not connected to any Taxi operation or The Land Transportation Franchising Regulatory Board, of course) I am infuriated by the LTFRB's "Crackdown" on the app, UBER, and its contemporaries. I honestly don't know the legal mumbo jumbo that the LTFRB is spewing out in trying to justify its stand on treating this service - which by the way has helped hundreds get a ride in the traffic congested metro- like a crime, similar to drug dealing.

To go out of their way and do a "Sting Operation" just to "Bust" the driver, which resulted in a P200,000 fine for the operator and a 3 month impound? Was that really a smart way to spend tax payers money?

I'm baffled why the LTFRB is going out of their way to STOP a service that is clearly helping people, and is preferred by a good number of the public.

I think LTFRB Executive Director Roberto Cabrera III needs to stand out on the street and try to hail a cab more often during rush hour so he'll know what it feels like to be a stranded commuter.

If you don't know what Uber is, it's a smartphone App in which will find you an available vehicle nearest you from its fleet. Once an available driver is alerted to your location, you will be given an estimate on the time they will arrive at your pick up point, even giving you the description of the car, and the contact details of the driver (including a photo for ID Purposes!).

Everyone I know that has tried this app, has nothing but good words to say about it. If you haven't tried it yet, I highly recommend you do. Here are some reasons why I love UBER. 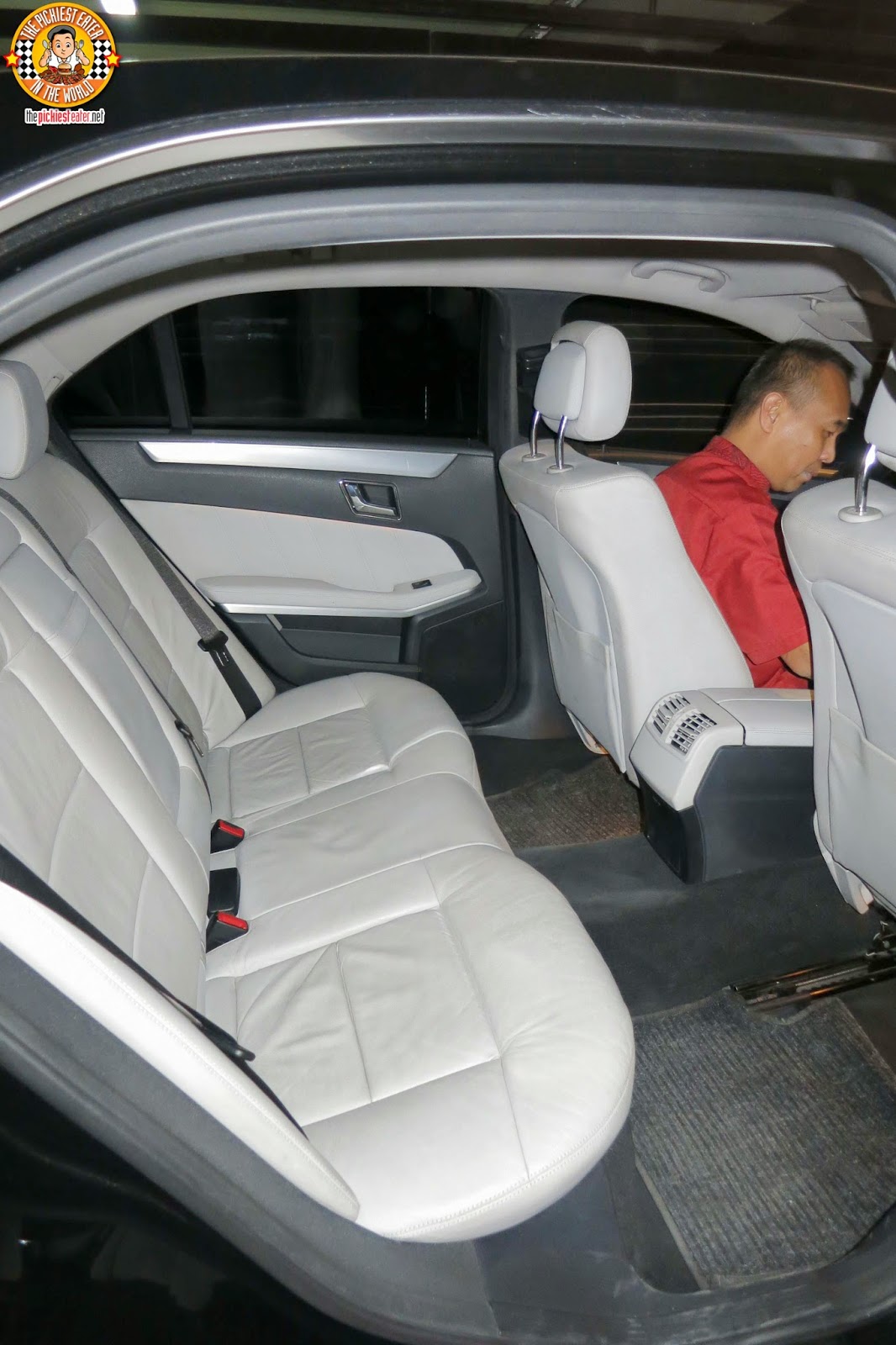 An Uber driver has NEVER turned me down when I told him my destination.

In my lifetime, I have taken cab rides in countries such as The United States of America, Singapore, Hong Kong, and Korea. Each of those times, I did the Pinoy habit of opening the door and telling the driver my destination before hopping in. Each time, the driver had to tell me to get into the cab first, then we'd talk about where I needed to be dropped off. Each time, I was brought to my destination with no questions asked.

NEVER did I get unceremoniously dumped back on the street because the cab driver didn't want to go that direction for fear of traffic.

Here, not only is it hard to find an available taxi during rush hour, but when you do, you have to also find a driver that will be amenable to take you where you need to go. It's sort of like "Trial and Error".

When I told my cab driver, "Makati, boss", and he answered, "Quezon City ako pupunta eh". That was a head-scratcher for me. Umm.. So the driver gets to dictate where the cab will go? The Customer has no say? This is a taxi service.. Why would he have a route like a "Bus" or "Jeepney"?

Another time, (this was around 4 years ago) I told the cab driver that I would like to be dropped off in Glorietta 4, so he let me in. As I hopped on, I received a text saying that my friend would meet me instead at SM Makati, which is across the street from Glorietta. Since it was so near, I told the cab driver of the change of plans, thinking it shouldn't be a problem.

The old man screeched his car to a halt, and kicked me out, saying "Ang gulo mo kausap! Sabi mo Glorietta!" So i said, "Sige Boss, Glorietta nalang!". He yelled, " Hindi! Ayoko sa magulong kausap!". I tried to explain, "Magkatabi lang ho ang SM Makati ang Glorietta 4!", he continued to yell, "Wala akong pakialam! Bumaba ka!". So I went down, but not before I gave his door a swift kick. He kinda saw how pissed I was so he frantically drove off.

I'm sure you have our own Taxi Horror Stories, right?

If you've ever used an Uber Service, then you know that the Uber Drivers are one of the nicest, most courteous people you would ever have the pleasure of riding with. As drivers, they take pride in their work, going out of their way to make sure that your ride is a delightful one. The only questions they ask where you would like to be dropped off, and if you have a specific route you would prefer to take. 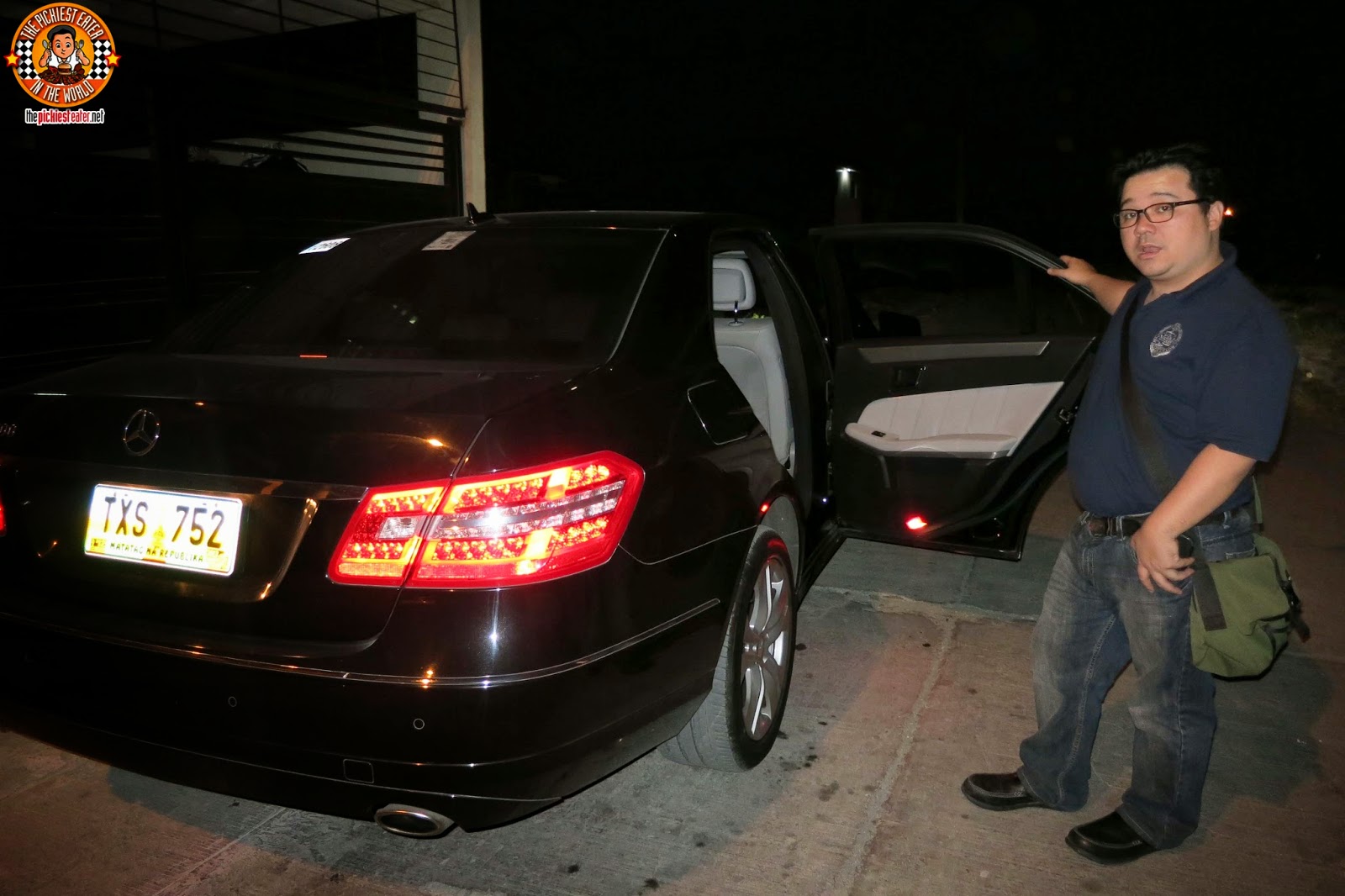 An Uber driver has never been accused of trying to drug passengers.

Instead of cracking down on a Uber drivers, why didn't the LTFRB use their resources to track down taxi owners and drivers that try to hold up their customers? Wouldn't that be the more sensible "Sting Operation"?

You hear stories about cab drivers suddenly taking different routes and eventually picking up accomplices, even going as far as spraying the aircon with some sort of "sedative", in the effort of rendering his passenger unconscious, making them vulnerable to robberies, or even worse, rape.

A blogger friend of mine almost got robbed by a taxi driver. She was taken down an unfamiliar path, and noticed the driver constantly texting. The moment he answered a call and said, "Malapit na kami (We're near)", she told the driver to pull over, in which the driver replied with a hearty laugh. She literally had to jump out of the moving vehicle in order to save herself. The fact that the driver sped off, with no regard for his payment only reaffirmed her fears.

With Uber, you have a record of the driver's name and number, including a "rating" given to them by other Uber users. If you have any complaints, you may leave comments on their Facebook page. 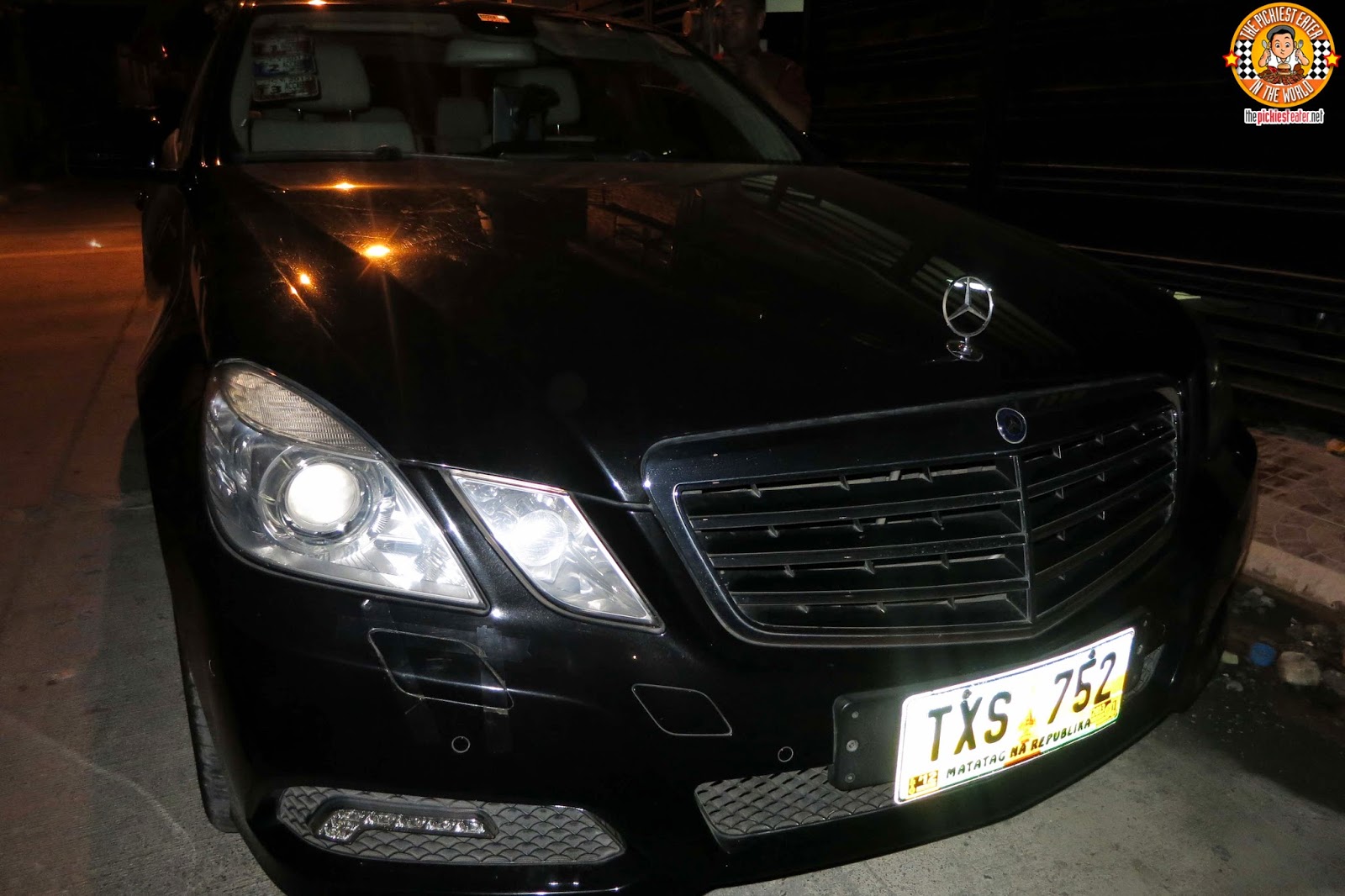 I try not to be so finicky when it comes to choosing a taxi cab. I really don't mind how rinky-dink the car looks like, for as long as the air-conditioning is functioning well, and the engine is running smoothly. But too many times, I've ridden on cabs wherein the driver had to stop to refill the radiator with water, or some rattling noise was heard under the hood.. Some even with a putrid smell. With the way that cab drivers use their car- complete disregard for humps or potholes- you can tell that keeping their cab in good condition isn't a priority.

My very first Uber ride was the highly coveted Black Mercedes Benz. Since then, I have ridden in vehicles such as a Ford Everest, Hyundai Starex, Mistubishi Mirage, Honda Civic, with the Toyota Innova being the most "low end" car assigned to me... All practically brand new! In fact, most of them didn't have their license plates on them yet!

All the cars were immaculately clean, and in pristine condition. 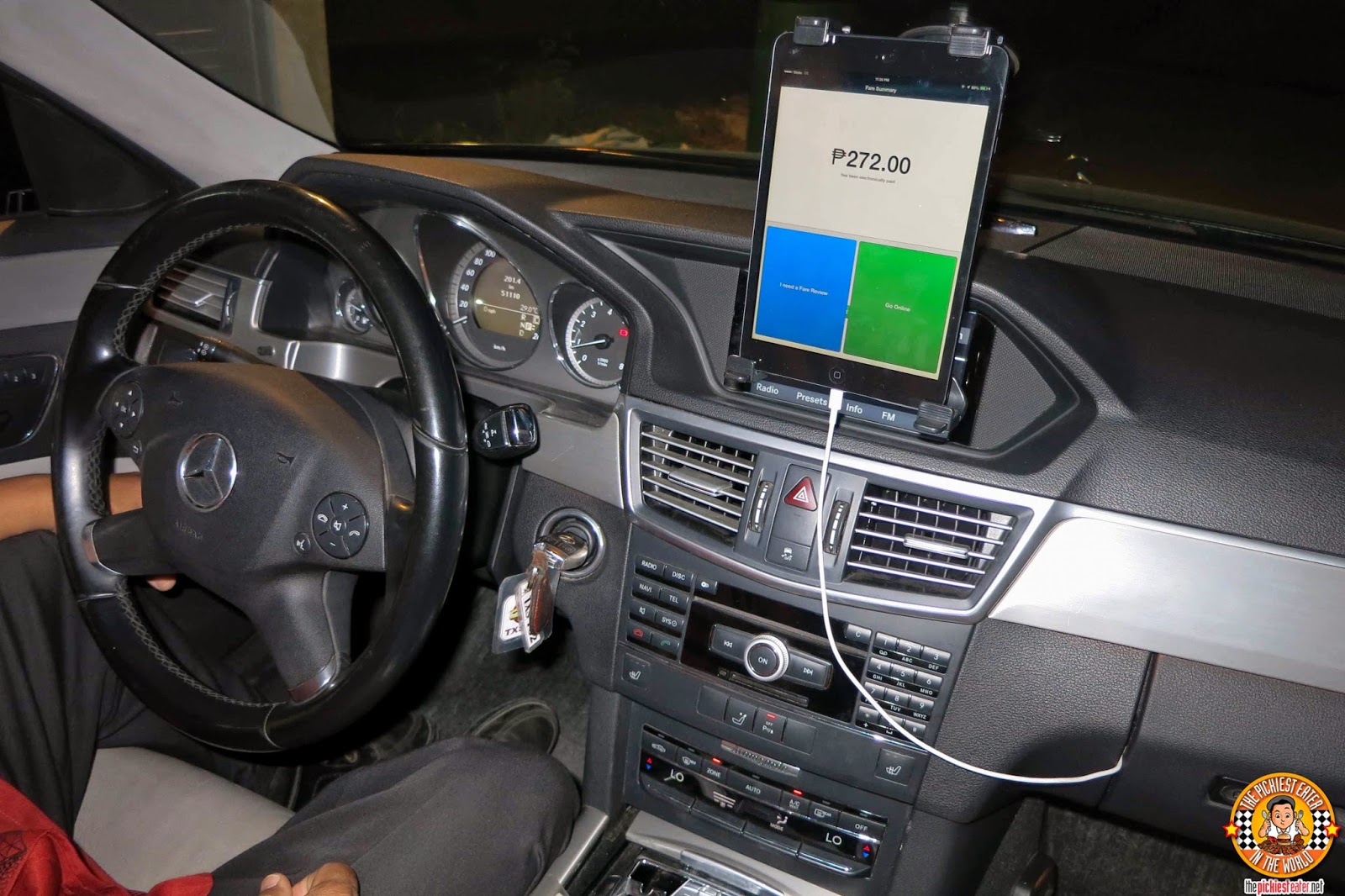 Paying with your credit card is convenient.

Some cab drivers won't let you ride unless you promise them "Plus P50".. Meaning P50 bucks ON TOP of your metered Bill! One even asked me for Plus P100!

LTFRB, is this legal? Why don't you crackdown on THESE scumbags?

To be fair, if you have no problem paying the additional 50 bucks upon hailing down a cab, then that's your business. (I do that once in awhile) But what I don't appreciate is the additional 50 bucks being demanded from me when i'm being dropped off. One time a driver told me matter-of-factly, "Ang layo pala ng bahay mo sa loob ng village, dagdagan mo nalang ng P50..".

I left him without his extra P50, telling him I'm not obligated to give him any more than what the meter reads, and that that if he wanted extra, he should have said so BEFORE he agreed to take me home.

I usually tack on an extra P10-P20 for the driver. If I like the driver, maybe a little bit more. It's not much, I know, but I hope that a small amount would help him someway, somehow.

Another thing to note is that, Cab drivers often say they don't have change for, in a way forcing you to pay them a little extra. Smooth, huh?

The credit card requirement kind of alienates some people from using the app, but I like it. I liked not needing to worry if I have enough 20s or loose change, in case the driver tries to pull one over me.

I can easily get an estimate of my fare through the app, simply by punching in your pick up point and destination in the map. Then after the ride, the driver hits the "End Trip" button on his tablet, and the amount that will be charged to your card is sent to your mobile phone and you are issued a "virtual receipt" via email.

All I need to worry about is keeping a P20 bill to give as a tip to the driver, which often times, they politely decline.

Granted, Uber is a tad more expensive than your usual cab far.. Expect to add at least up to P70-P100 to your regular cab rate. But in my opinion.. The convenience, the safety, and the quality of the ride, makes it all worth while.

As a husband, I never usually allow Rina to commute. But ever since I discovered Uber, I feel much safer.

If the LTFRB wants to get rid of UBER and the other similar apps, it needs to provide the people with a better, safer, more efficient taxi service alternative.

Provide us with cab drivers that are not "choosy" with their passengers would be a great start. But the bottom line, the existing taxi services NEED to improve. To pull the plug on Uber now is counter-productive, and it almost feels like the government agency is upset that there is a new way to make things easier for the people. It's almost like the LTFRB WANTS to make things harder for the Filipinos.

The LTFRB has bigger problems to worry about than Uber. Buses are falling from the sky and landing on passenger vehicles, because little or no inspections are being done to assure their road-worthiness. Trucks are clogging up the freeways. Jeepneys feel that they have the right to pick up passengers in the middle of the road.

Uber is one of the things that works, so they should just leave it alone. Maybe it will force the taxi services to step up their game.

The MMDA has already issued a statement in defense of Uber. But unless LTFRB starts earning from the success of Uber, don't expect them to change their stance anytime soon.

Unfortuantely, some agencies would prefer to prioritize how to make money off the plight of the Filipino people first, with finding a way to help them a distant second.